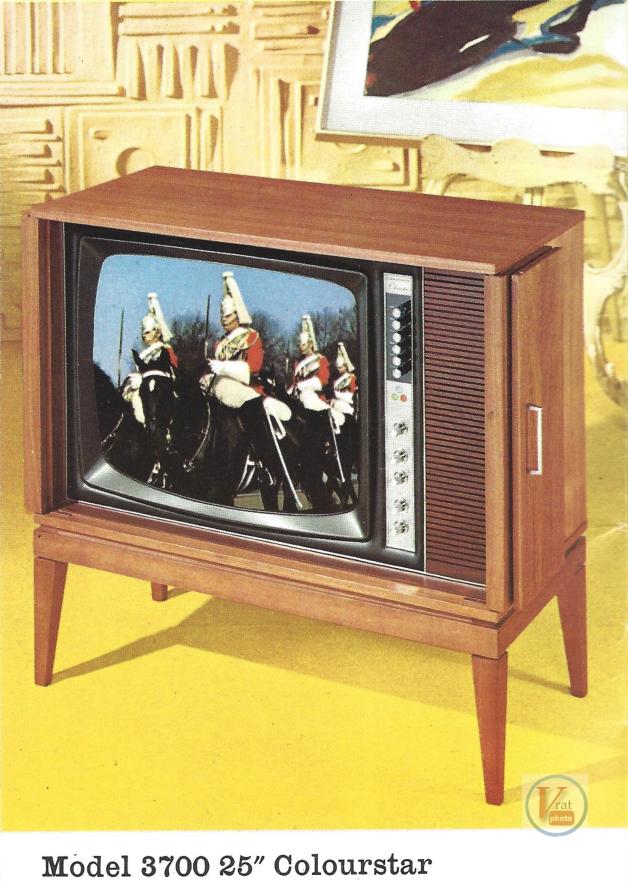 Here we have an early ( low serial number) BRC 2000 chassis in a Ferguson. The first fully transistorised colour television receiver in the world. This Ferguson Colourstar Model 3700, introduced in 1968, uses a 25 inch MAZDA shadow-mask tube. This being a colour dual standard, is capable of 405 line and 625 line.

There are eight detachable circuit boards which are placed all around a rectangular frame which forms the main chassis. The whole unit can be slid out on rails to aid access and servicing. 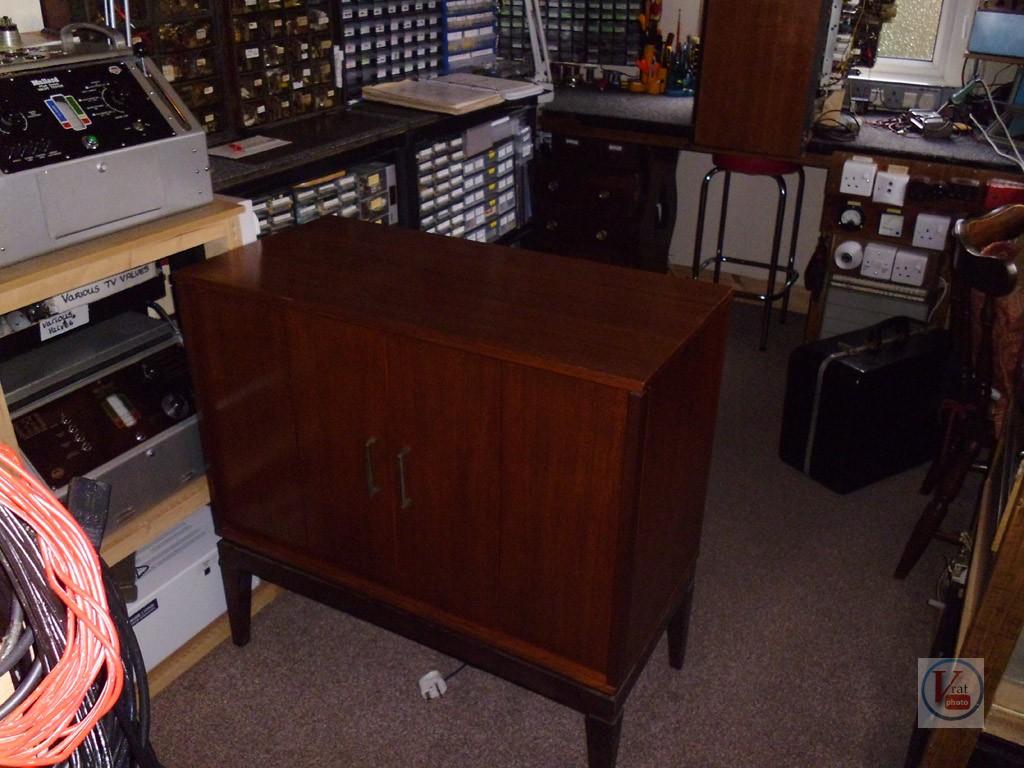 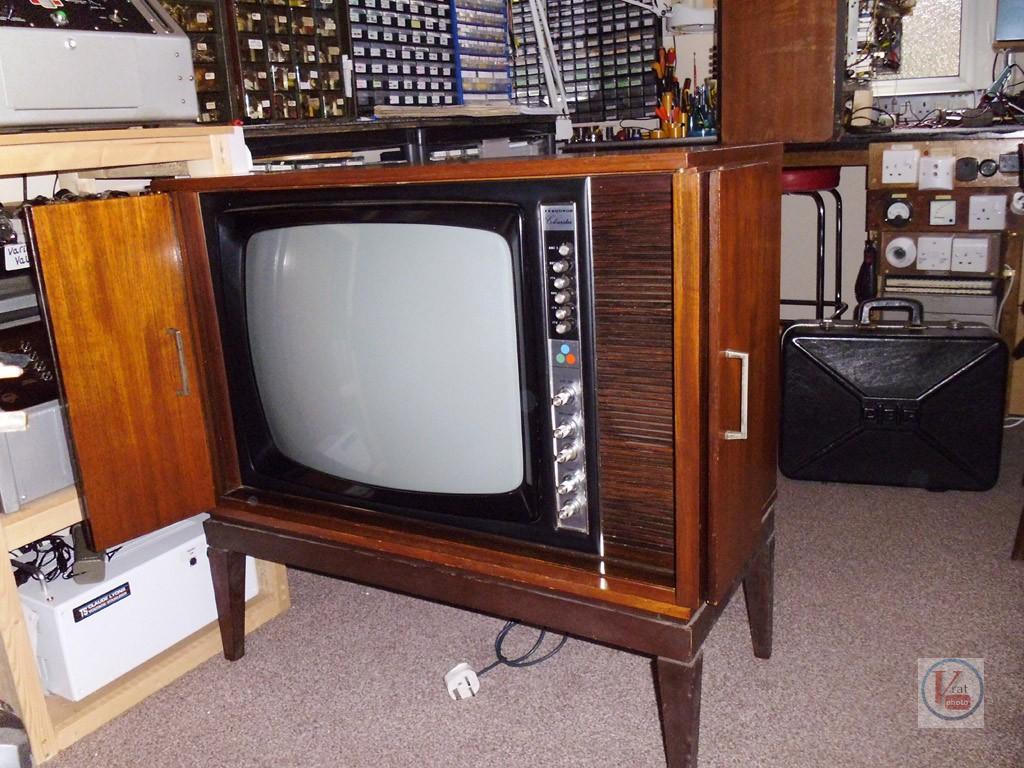 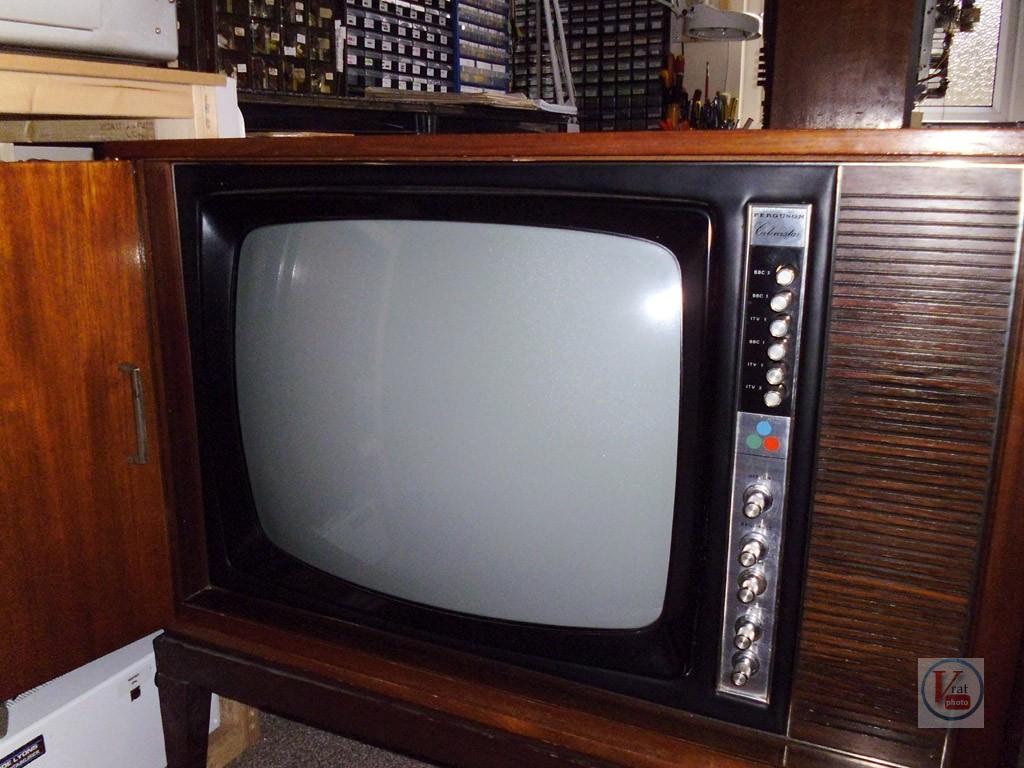 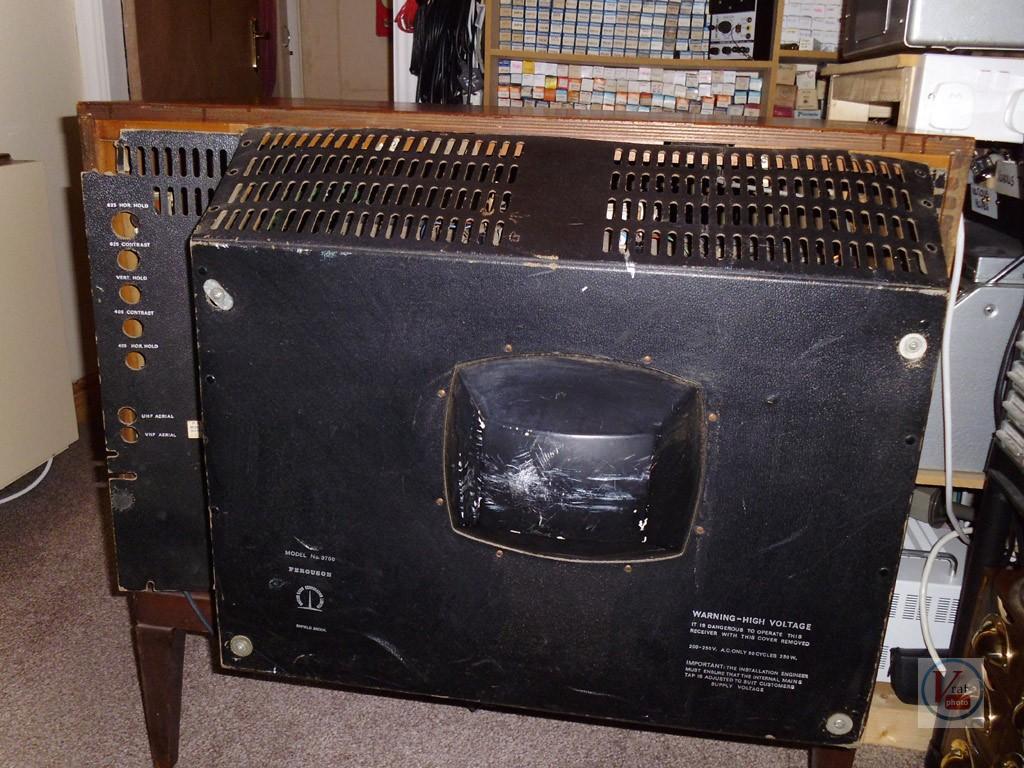 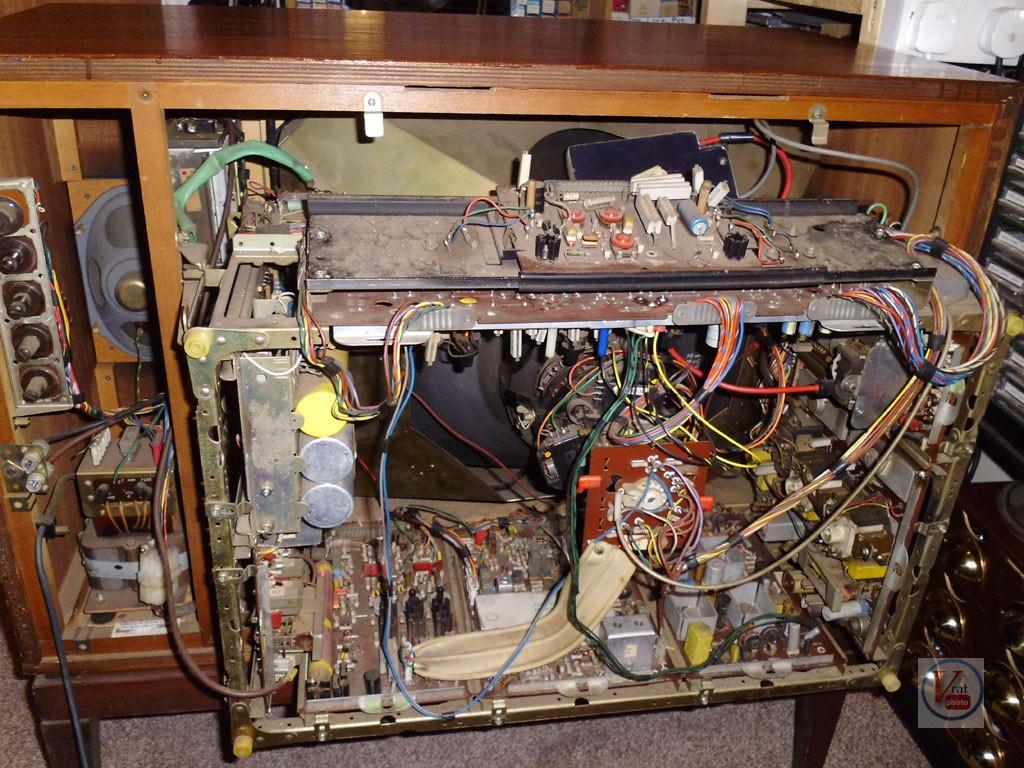 Powered on and found the EHT was way too high at around 30kV !!! adjusted R14 to bring it right down. The focus control is still one ended but the picture is a lot better. Further investigations continue 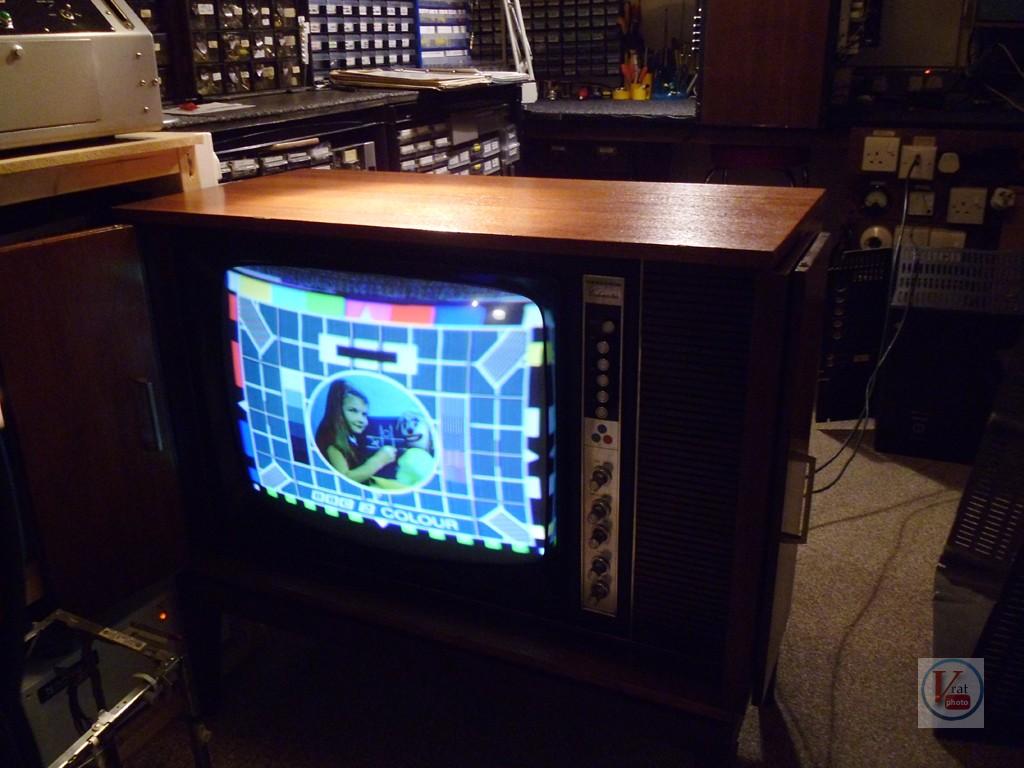 Powered on later to start sorting the linearity, however No EHT now! Disconnected tripler, could not draw a spark from the EHT TX. Removed VT7, tested and found this had failed. Installed new VT7, powered on, still no EHT!

Checked new VT7 just in case that had popped, nope it tested OK Tested W3 diode, that was OK.Scope time!

The intermittent fault with no EHT manifested itself once again, spent some time going over the EHT generator and found diode W1 had been replaced some time in the past with a 15V zener, it should be 10V. This was replaced along with C4 (64uF 16V) with a 68uF 16V, also checked the resistors were in tolerance. I removed the two Callins C2 & C8 ( 140uF 95V) and replaced with two 150uf 400V ( all I had). Also replaced C1 75uF 9V with a 68uF 16V, wetted some joints. 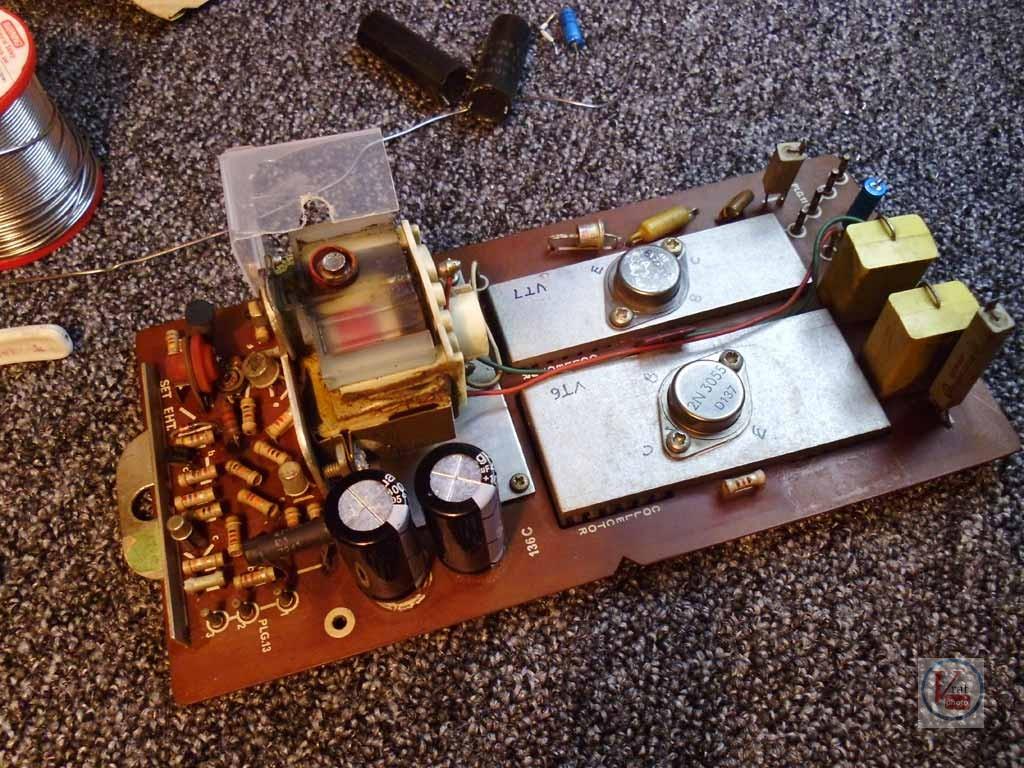 EHT still fails to start, with the set still powered up adjusted R14 which kick started the EHT up at 30kV which was quickly backed off to 24kV. The picture is bouncing in and out, monitoring EHT shows small fluctuations. Switch off, powered on, again EHT would fail to start until it was ramped up again. Most odd, it would seem you need to have it really high to get it started, backing it off lets the set run safely but will not start EHT once switched off.

Voltage checks were taken with all the rails as expected but showed the the differential amplifier was biased off. The sampling for the amp is taken directly from the tripler. Suspect the EHT generator board is fine and the sampling was just not detecting enough output from the tripler which was starting to look more and more the cause.

To hasten the proceedings along the EHT generator board from the working HMV 2700 was borrowed, the same fault condition persisted. This now clearly points towards the tripler being highly suspect. To prove this once and for all the tripler from the HMV 2700 was installed with the 3700 EHT generator board.
EHT now  rustled up a soon as the set was switched on, something the other one did not do. all was OK, stable raster, the tripler is proven to be at fault. Another thing I noted was the old tripler would take about 8+ seconds delay before EHT would start, the good tripler was instant.

As I had nothing to loose now I thought I would open up the faulty tripler and assess where the fault was and see if a possible rebuild of the tripler could be attempted. I carefully removed pieces of the silicon to reveal the diodes, caps and VDR. Then I found the fault, the internal VDR Z501 is O/C.  This would explain the intermittent start up of EHT and why the diff amp VT2 & VT3 has trouble sampling the EHT voltage which is taken directly from the VDR. It had me believing there was a fault on the EHT generator boardI reckon the tape around the the base of the lead-out is the clue, an attempt to secure the lead to the housing to negate strain on the VDR lead-out wire and EHT tracking. I expect the diodes and caps are fine.

The rebuild of the tripler can be followed here.

Luckily I had a good spare tripler for the 2000, this was tested it in another set, EHT was tracking out from under the anode cap but essentially, it worked. I cleaned the tripler with IPA, remade the insultion around the lead outs with self amalgamating tape. Also cleaned the final anode cavity on the A63 120X. Powered up and EHT came up straight away perfectly regulated too, whats more no EHT tracking, thats cured, so the clean-up is highly recommended. Also the focus control is now smack bang in the centre again. Now work can continue on the set-up and alignment. 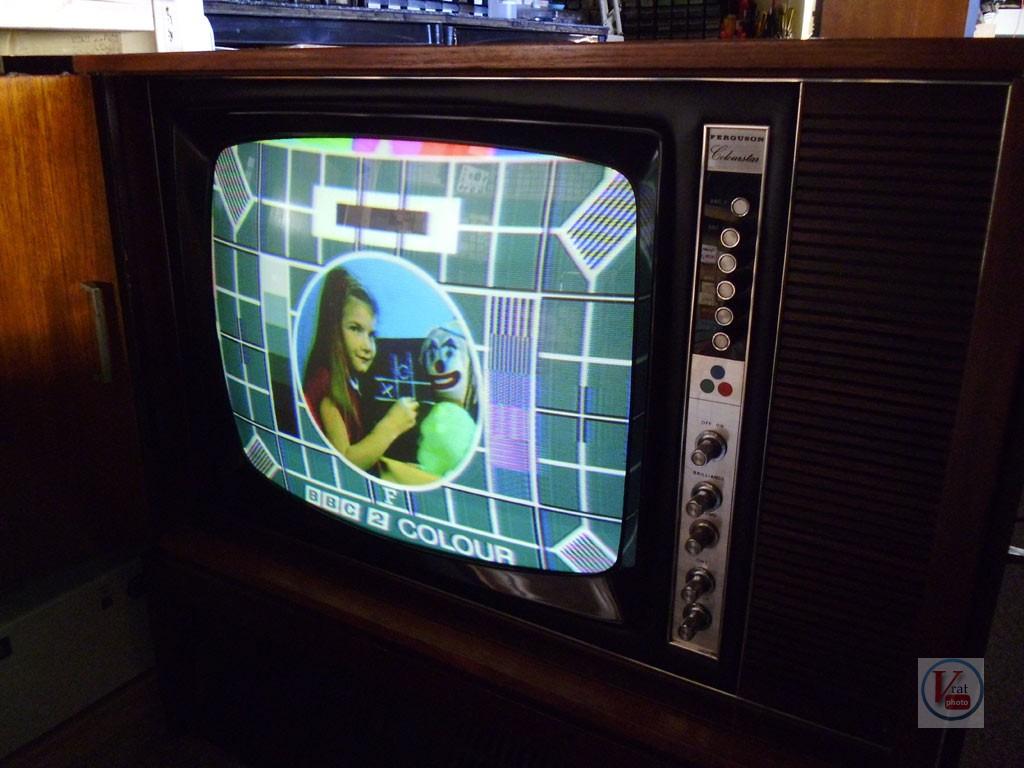 and its serial number is just two on from the one in this post, amazing!

Now featured on the Gadget show (December 2018) wall of fame as a major innovative gamechanger – and well deserved too.

Cut my teeth on these as a young tech, have just acquired my own 25″ model for restoration, very many happy memories looking at your fine CTV.

They are in my opinion one of the finest CTV’s ever made and by one of the most innovative manufacturers the industry had, despite what their detractors say. I have four 2K sets in my collection, in fact more than half my collection is populated with Thorn sets from thw 2K right up to the tx10, just need the 4K to complete the run

This site has reams and reams of info on the 2K and early colour sets in general, just hover you mouse over the “Blog” menu above and you will find trade articles, stock faults, brochures and many many others things to keep you out of mischief.