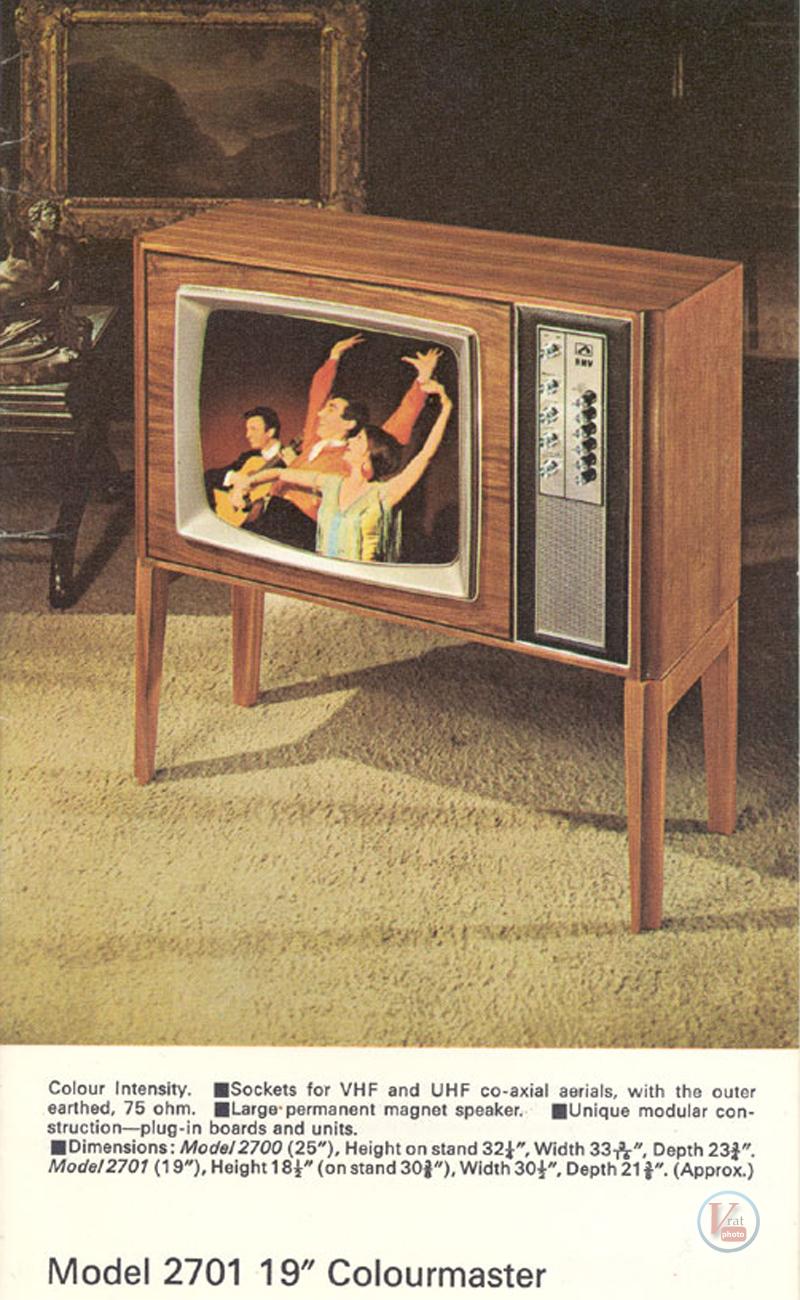 Here we have another example of the first fully transistorised colour television receiver in the world. This time in the guise of a 19″ HMV Colourmaster Model 2701. Introduced in 1967-1968, uses a 19 inch MAZDA shadow-mask tube. This being a colour dual standard, is capable of  405 line and 625 line. 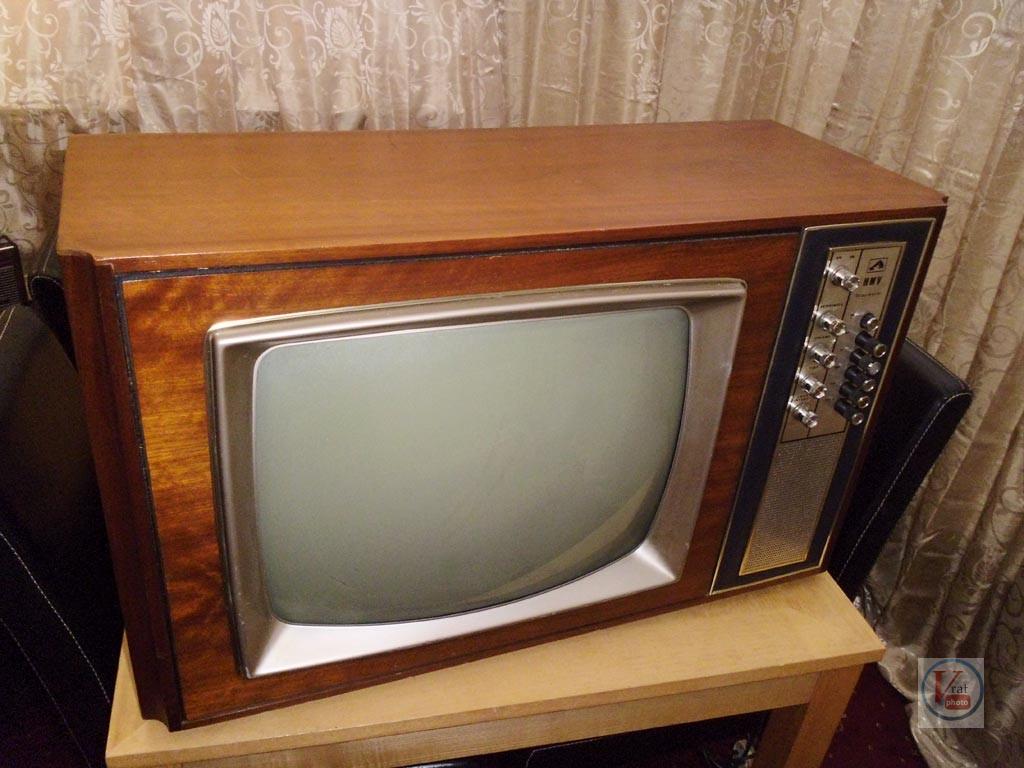 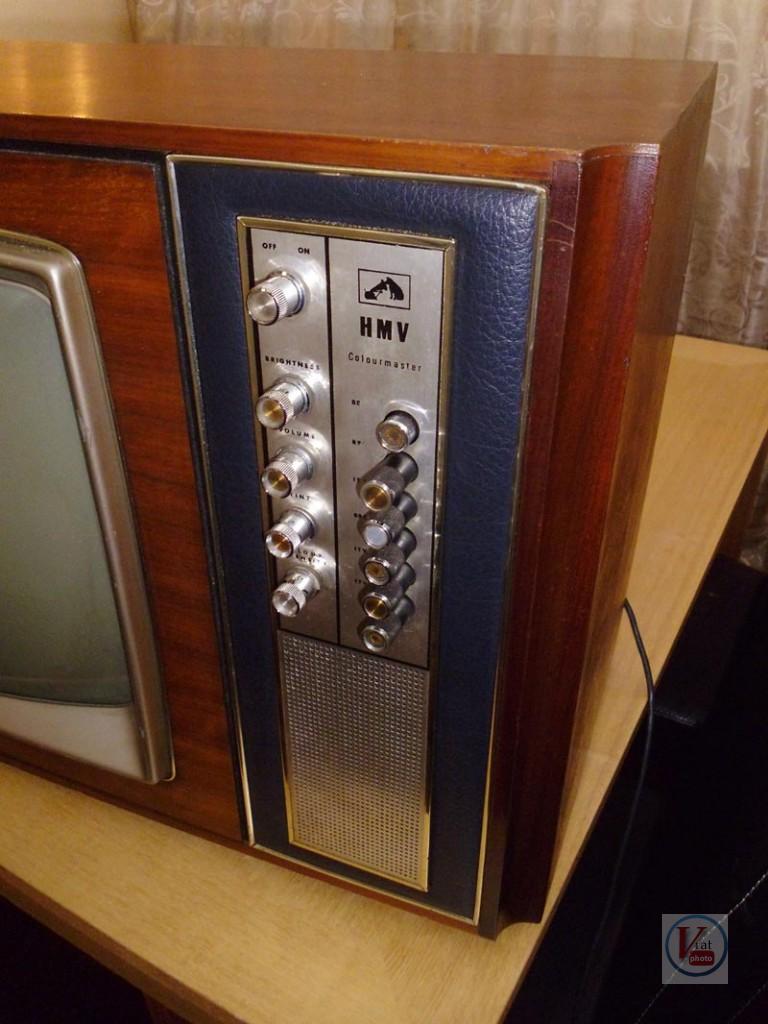 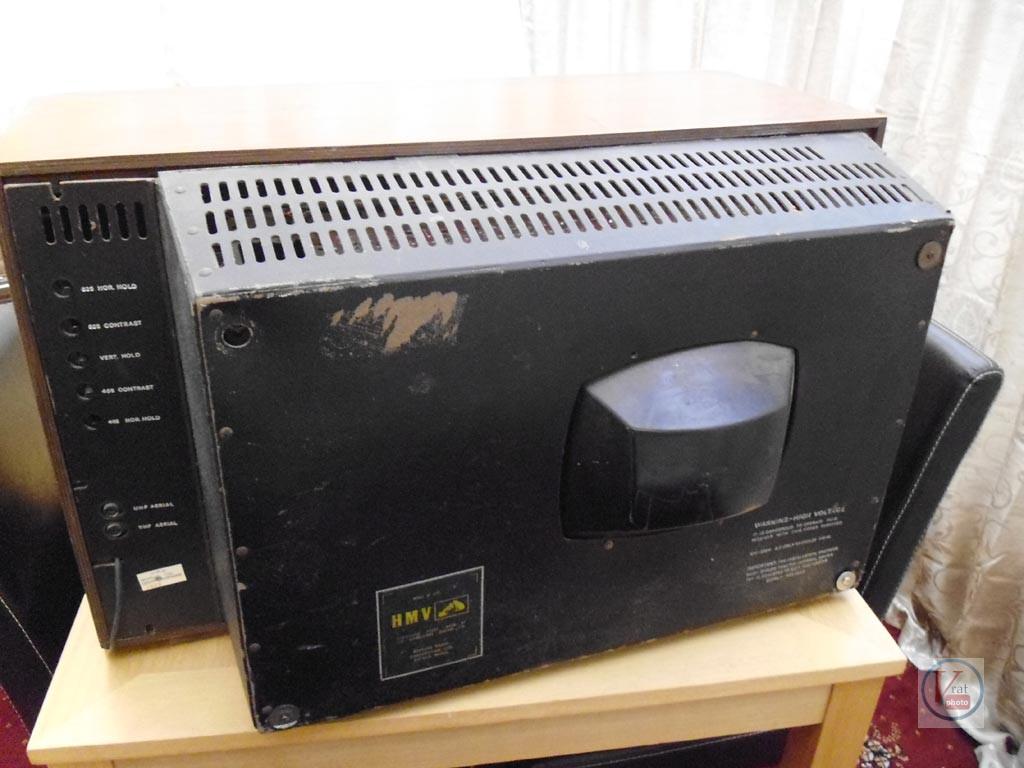 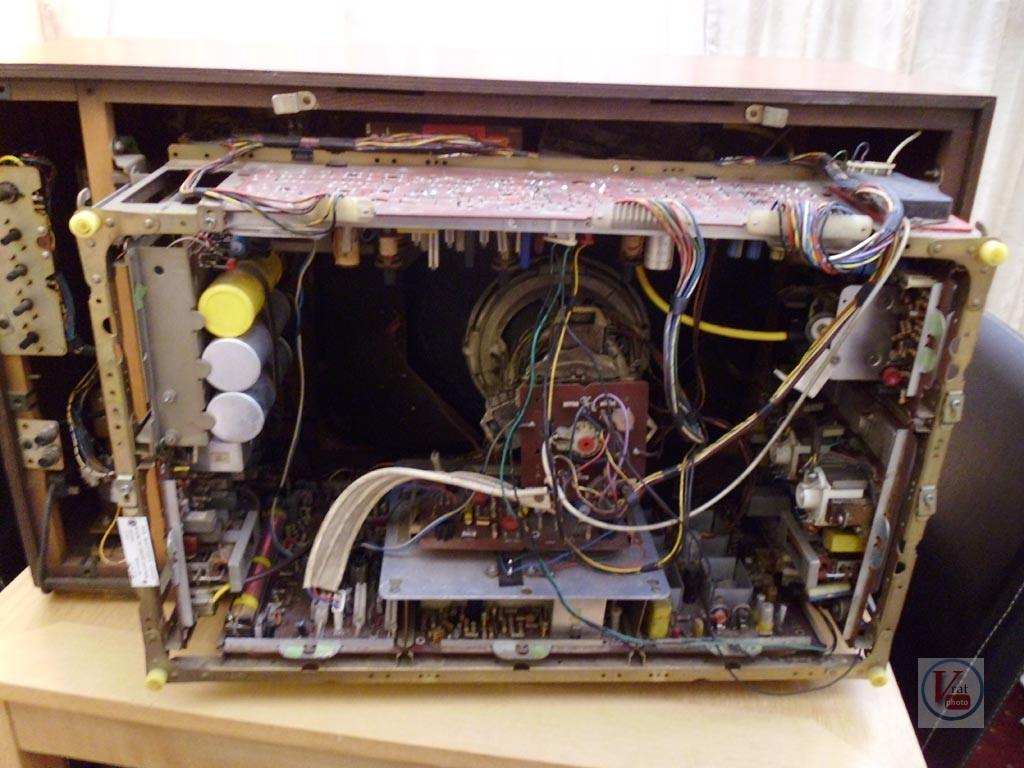 This set had quite bad EHT tracking, it was fizzing a cracking away, the tripler certainly needs looking at, I could fit a spare that I have in stock but spent the early part of the evening addressing this EHT tracking.

I hoped it was not failing but just suffering the same issue as my other one which I fixed. In an attempt to cure this I used the same method as I applied to the Fergy 3700 tripler.

The entire unit was cleaned up using IPA, all lead-outs had the securing tape removed and were again cleaned. They were then secure with cable ties to the lead-out tags, encased in hot melt then finally sealed with self amalgamating tape.

The final anode output was cleaned in the same manner and also sealed with hot melt where it meets the Tripler body. The anode cap, CT8 claw were again thoroughly cleaned along with the anode and surrounding area of the CRT. I also discovered a nick in the main EHT lead this was sealed and also wound with amalgamating tape.

Powered on and absolutely no tracking at all,  EHT rustled up nicely and a full raster was presented. Fed in Test Card F, selected BBC1 and tuned to locate. Found the signal and I do have colour of sorts, bit difficult to photo as the set was in the conservatory as the workshop needs bench space clearing as I have the G6 and Fergy 3700 in there, but I wanted to see quickly what was what with this one.

It needs a bit of centring, height reduced, linearity and very much needs grey-scaling and convergence. But colour is there and likely just needs a scope on it to check set it up, all of which will be done in due course. 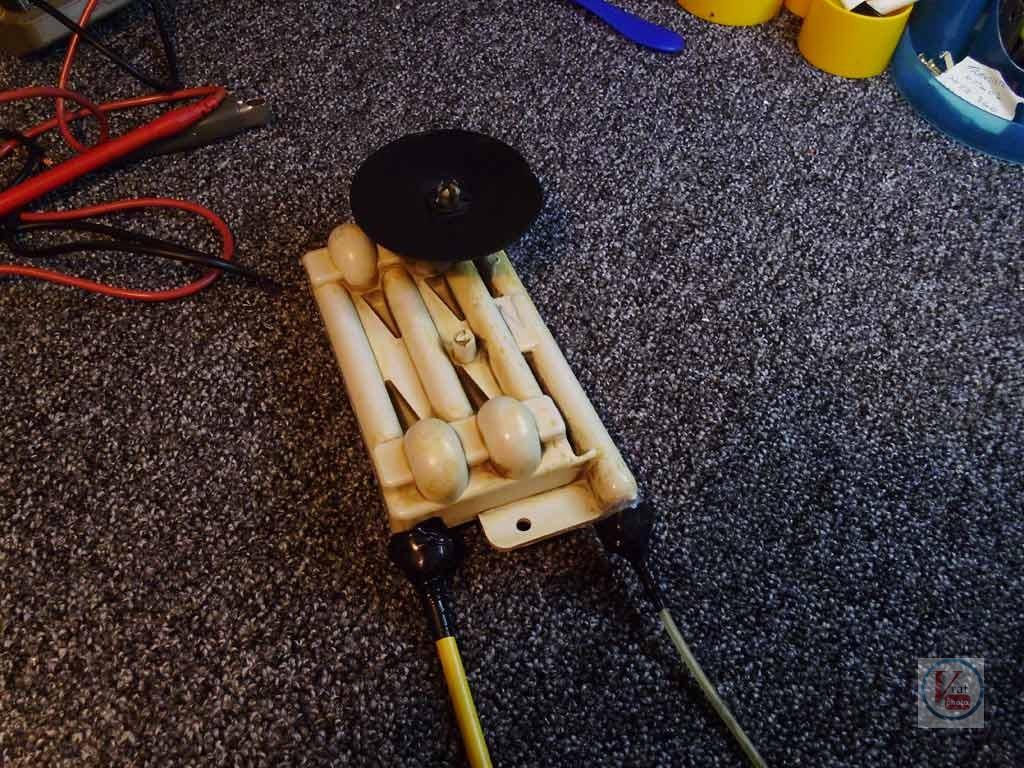 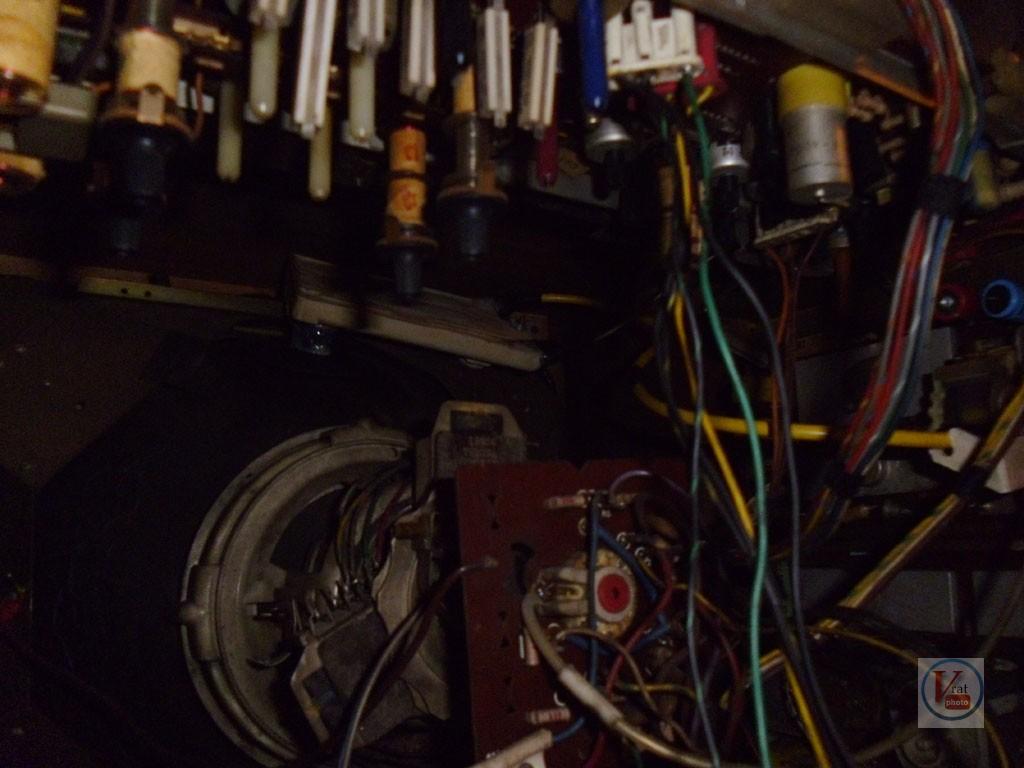 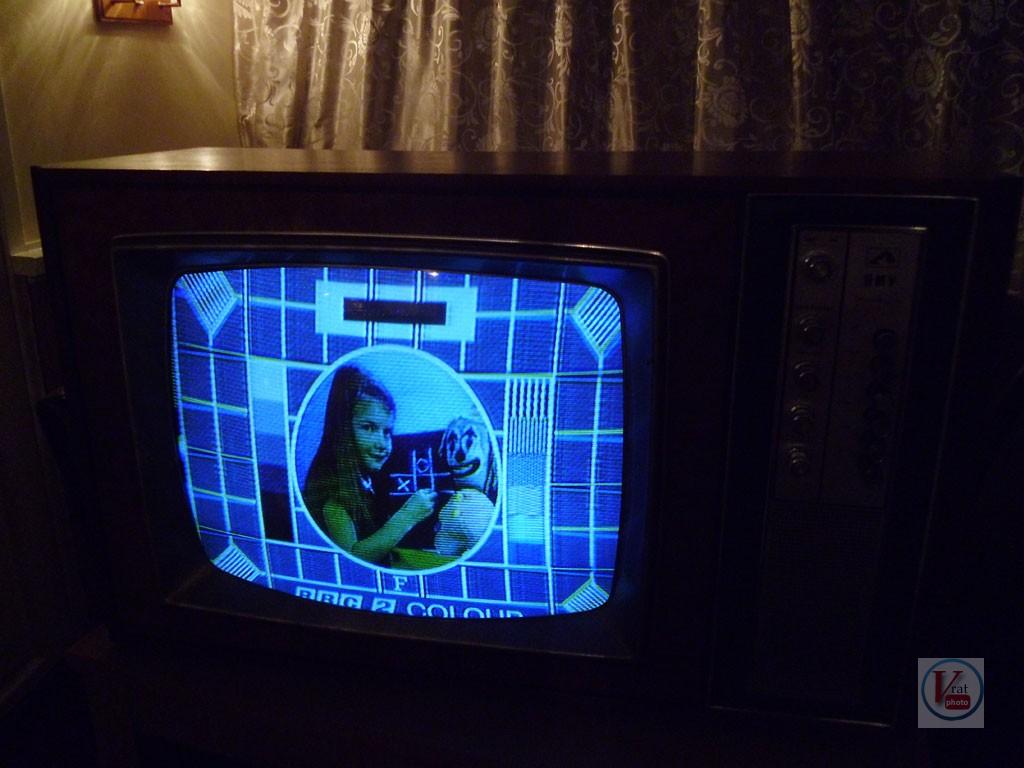 The CRT tests good on all guns, looking at the colour issue and feeding in colour bars, the scenario seems to be wrong colours accompanied by hanover blinds. Certainly lots of things to check, clamp circuits, bistable 7.8 Ident and phase errors for the blinds. But first to read up on the grey scale procedure on the 2K, although its looking fairly good in that area, still no harm to run through it to be sure its at optimum and it may just resolve. 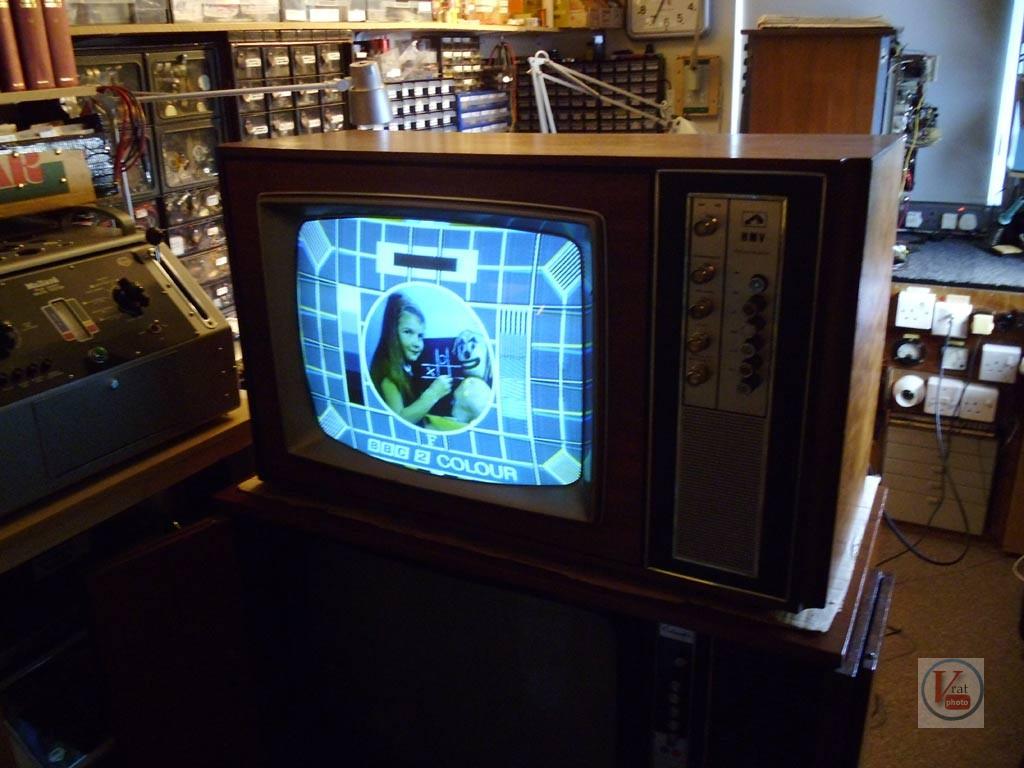 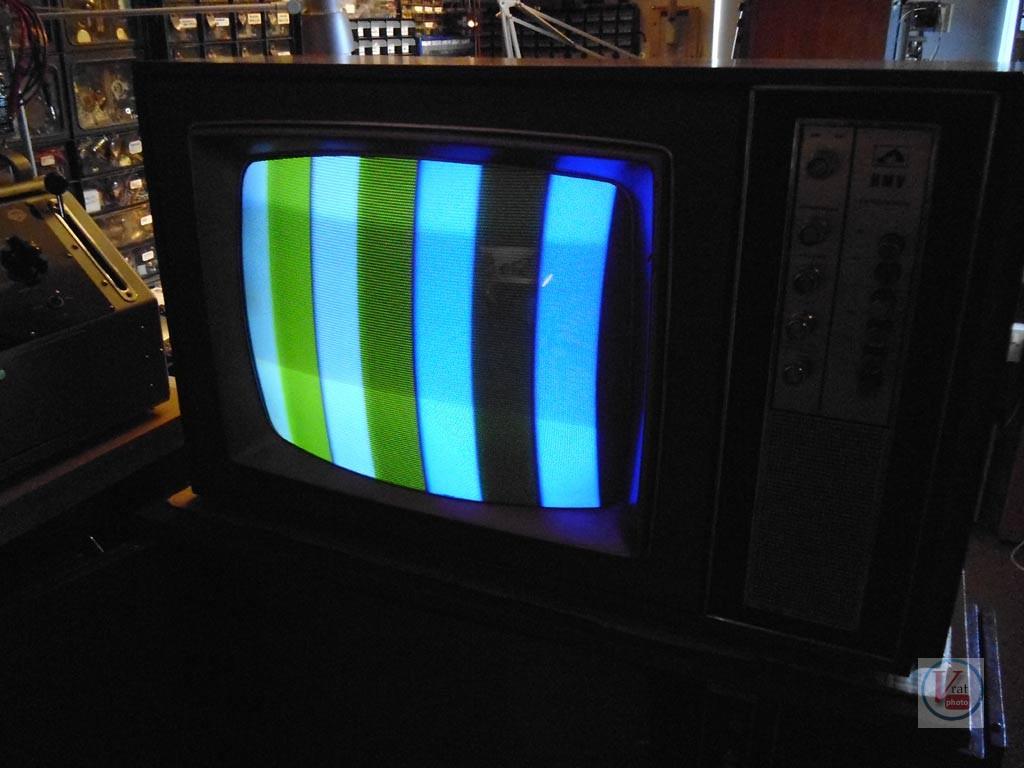 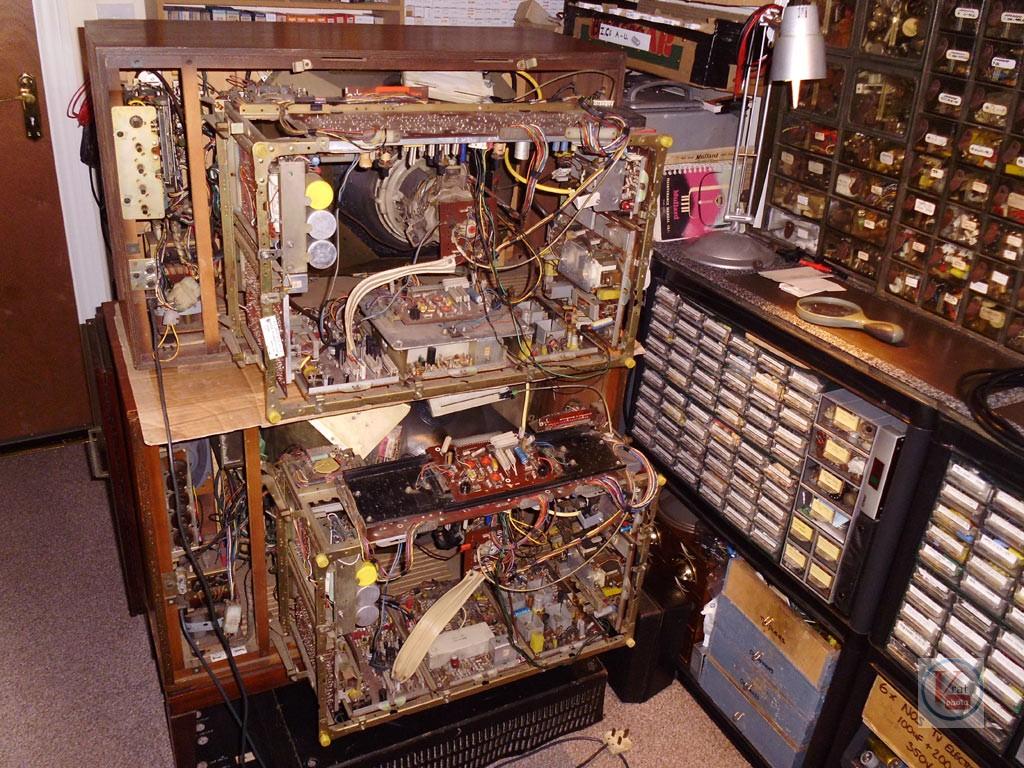 As can clearly be seen there is a colour fault, it would appear to be related to the grey-scale tracking not being set up, its not the whole problem but I need to address this procedure first.

Attempting the grey-scale tracking first resulted in me finding the set white switch was inoperative on the convergence panel, this was resolved.

Starting again setting tint to mid range, the three A1 pots to minimum, green & blue video bias to mid point with red ¼ turn from the full anti clockwise position. With the set white switch set to collapse the frame. I adjusted the video reference pre-set for 9.5V by monitoring via TP1 as specified in the service manual.

Next is where it goes wrong, monitoring the voltage via TP2 I need set the red,green and blue video bias for 90V ( my video board is the Type 135) starting with red I cannot get the Video bias set to 90V, there seems to be a dead spot leaving either side well over, or well under. I believe the pre-set is flaky. For the time being I returned the bias to mid points and will see if I have any 25K pre-sets in the morning.
Burning the midnight oil, Ooops its the wee hours of Sunday morning, need to go to bed. Its a little better, steps in the right direction hopefully. 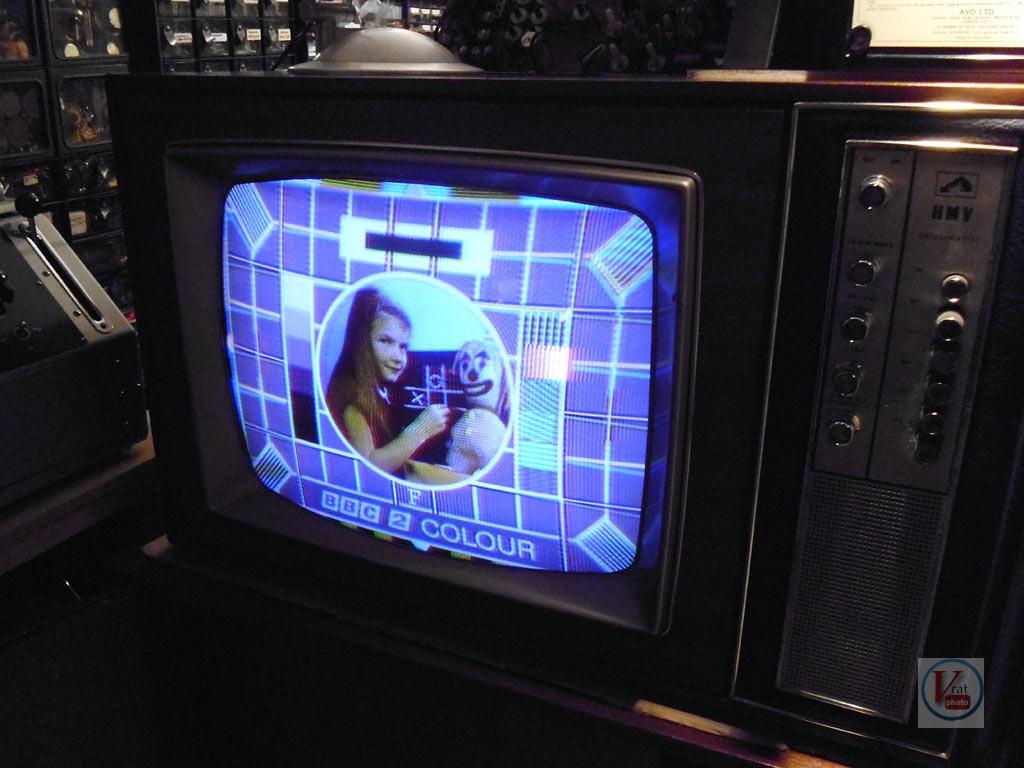 The handy thing having two 2000 stacked on top of each other is a diagnostic aid. The Fergy 3700 is producing good colours so I used that as my test rig for the 2701 fault finding.

Putting the 2701 video board in the 3700 revealed all the drive errors, I did a quick rough and dirty set-up of the 2701 video board. This led me to discover R79 the 25k blue bias preset to be faulty. This was replaced, that allowed me to get the board producing good colours on test card F, Carols dress was red, the puppets green and the blue background, all good so far.

Putting the Video board back in the HMV 2701 the colours were all gone with just a heavily biased blued screen presented, then the raster would suddenly go blank. This was traced to the convergence board S2 & R35 of the Blue A1, replaced then and this resolved that fault. Now I was left with a grey test card with virtually no colour but wrong colours could be seen running through.

The picture below shows the 2701 working with its own video board but using the 3700 decoder. Next steps will be to start fault finding on the 2701 decoder. The camera was a little defocused its not the TV, that was producing a nicely focused picture. 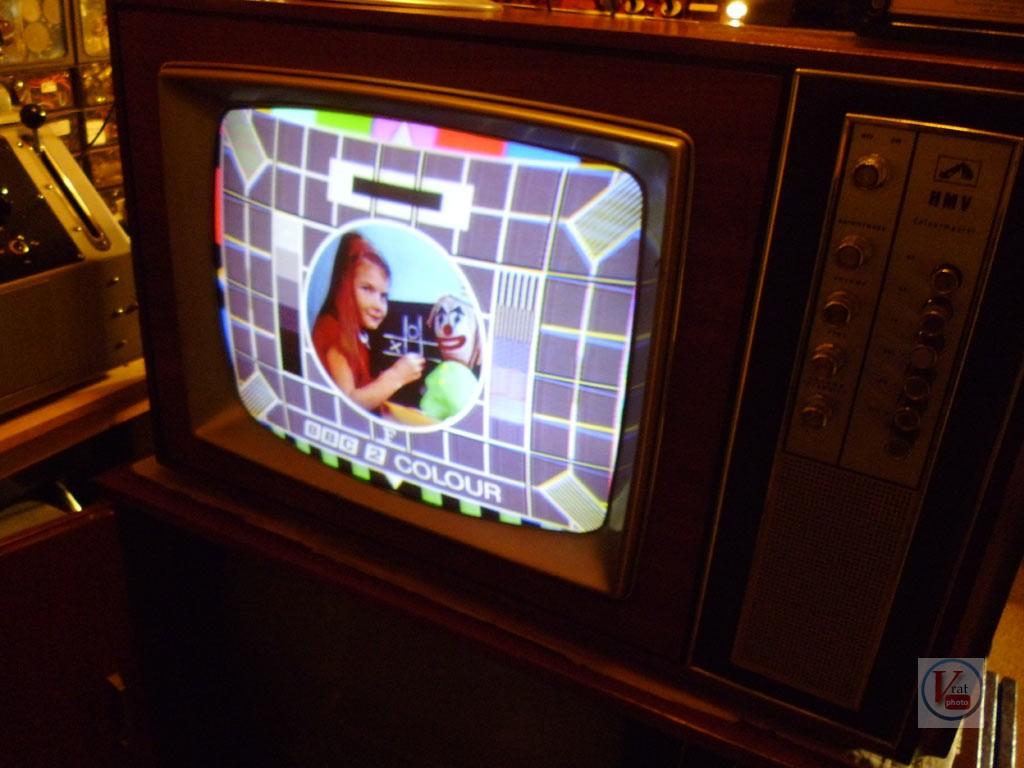 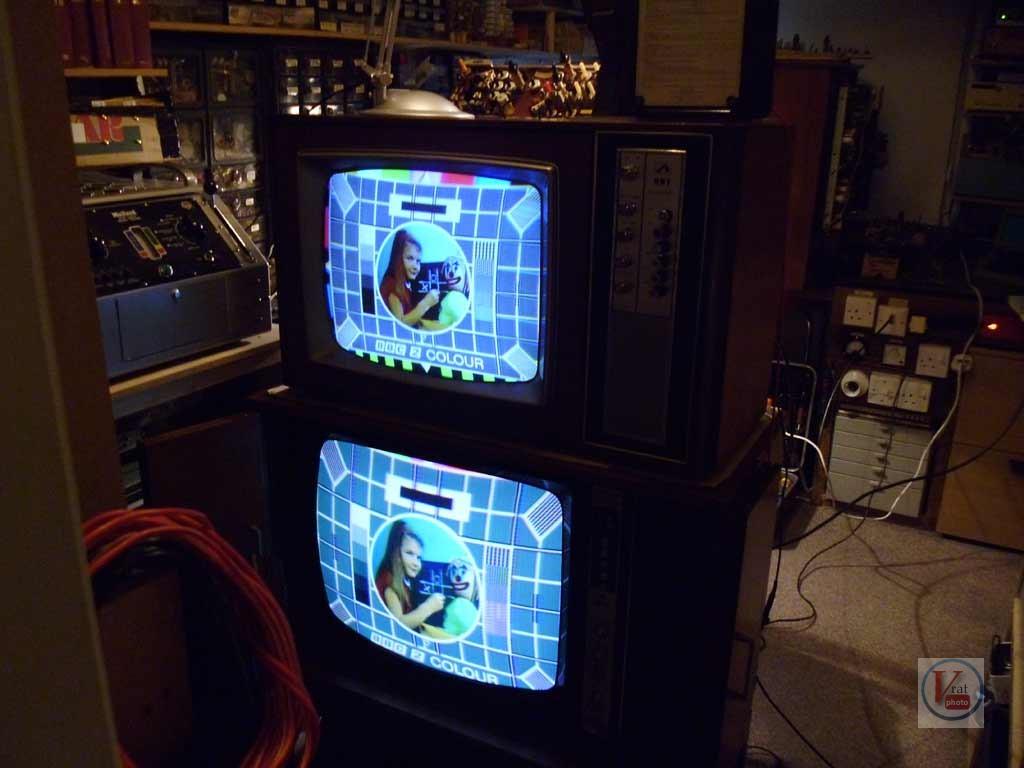 After a long session on soak-test last weekend, I had a break during the week. A subsequent switch on this afternoon to see where I’m at and I’m greeted with a very dark test card. Brightness is not quite at max but pretty much all the way up, I also note when monitoring the picture, it seems to be trying to fluctuate/vary by itself to a higher brightness level but not quite getting there. So a new fault to investigate now.

It was a quick find, the 2701 EHT generator had developed a fault. With the workshop lights out I turned the set on, I noticed the EHT TX where the nipple is and the lead-out to the tripler, sparkled quite brightly behind its perspex cover, only for a few seconds then settles down. 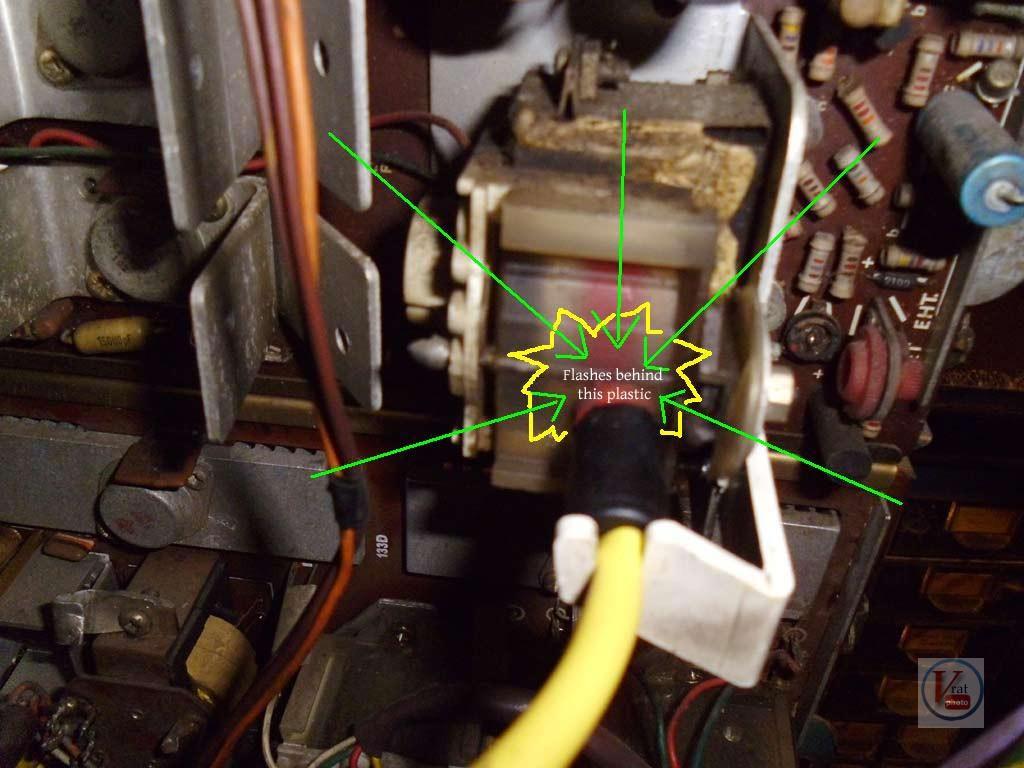 I swapped the known good EHT generator board from the 3700 into the 2701. Powering up no issues at all and the brightness is returned to normal with a good test card F, so this proved the 2701 EHT generator board has a fault. It could be the callins or other electrolytics that are present or the EHT TX is faulty.
That’s where the next investigation will commence.

Removed the faulty EHT TX from the generator board and replaced it with spare. Normal service now resumed. The faulty one had started to spark as (described above) all the time. 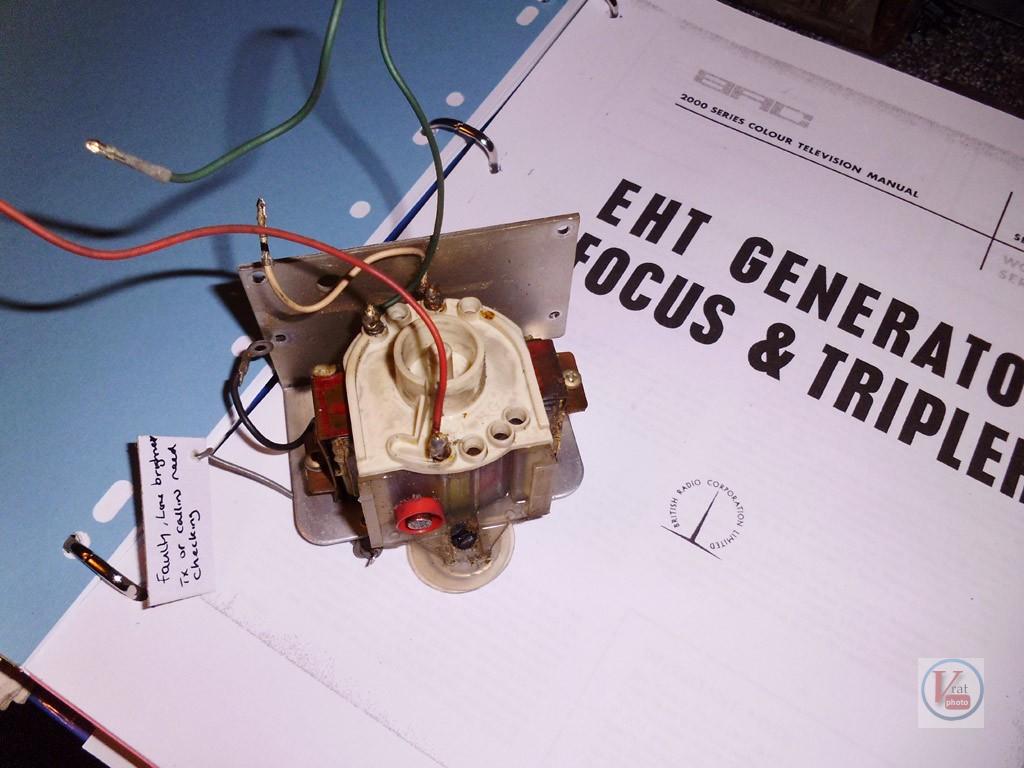 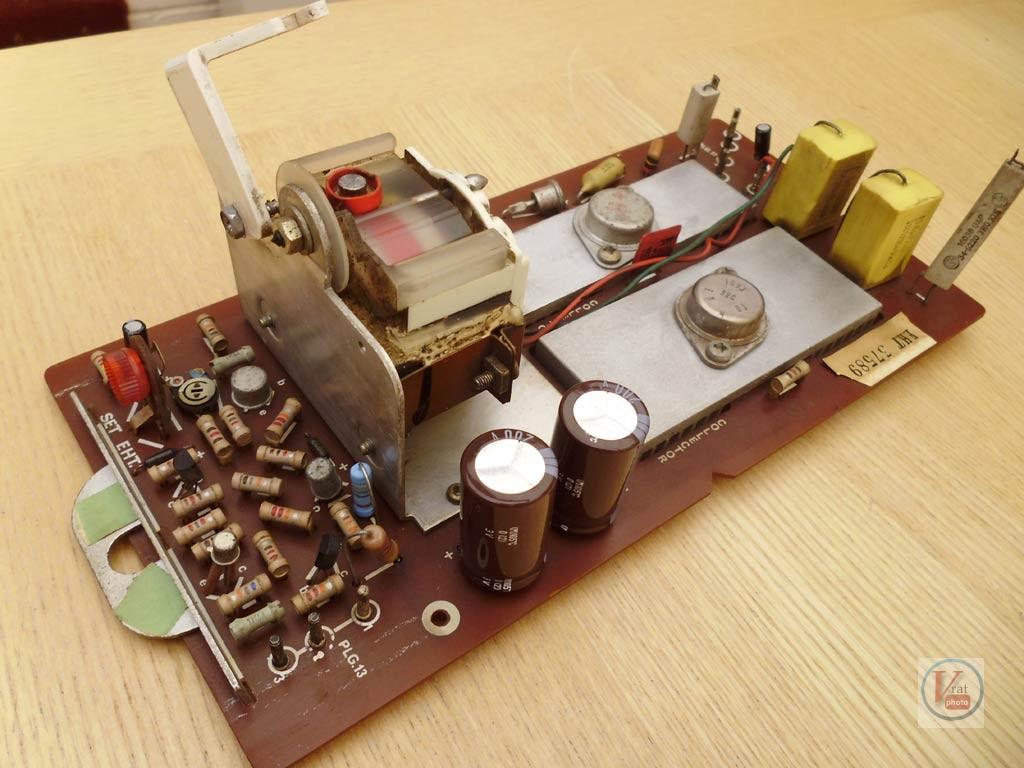 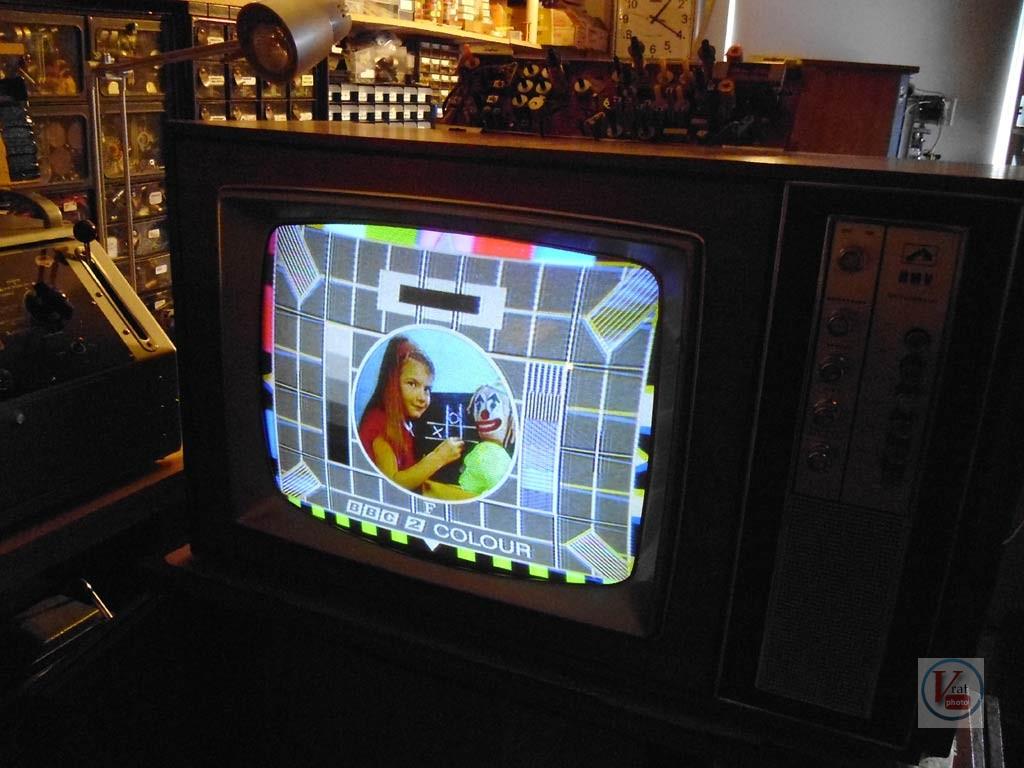 I seem to have less height than before, checked EHT, its not excessive sitting at around 21-22kV. Now to tackle the other faults of which there seem to be many coming out of the woodwork. Still this is they way I like it, Fix-0n-Fail.

The set has now developed a frame collapse, so its further work in progress.

After a long break, three years to be precise (wow time flies) a couple of weeks ago I decided to start tackling this set again. I had fixed the EHT and frame collapse back then so now it was time to turn on again and continue. Here is the result…..

The B-Y lead had broken and R6 was open, in as much as its one of those little resistors that break free of their end posts. I soldered the B-Y lead back and as a quick and dirty test just wedged the end of R6 back into its post. From here on lets hope this one shouldn’t present too many more challenges but all the boards are going to be checked over replacing where necessary components, then a full setup performed. 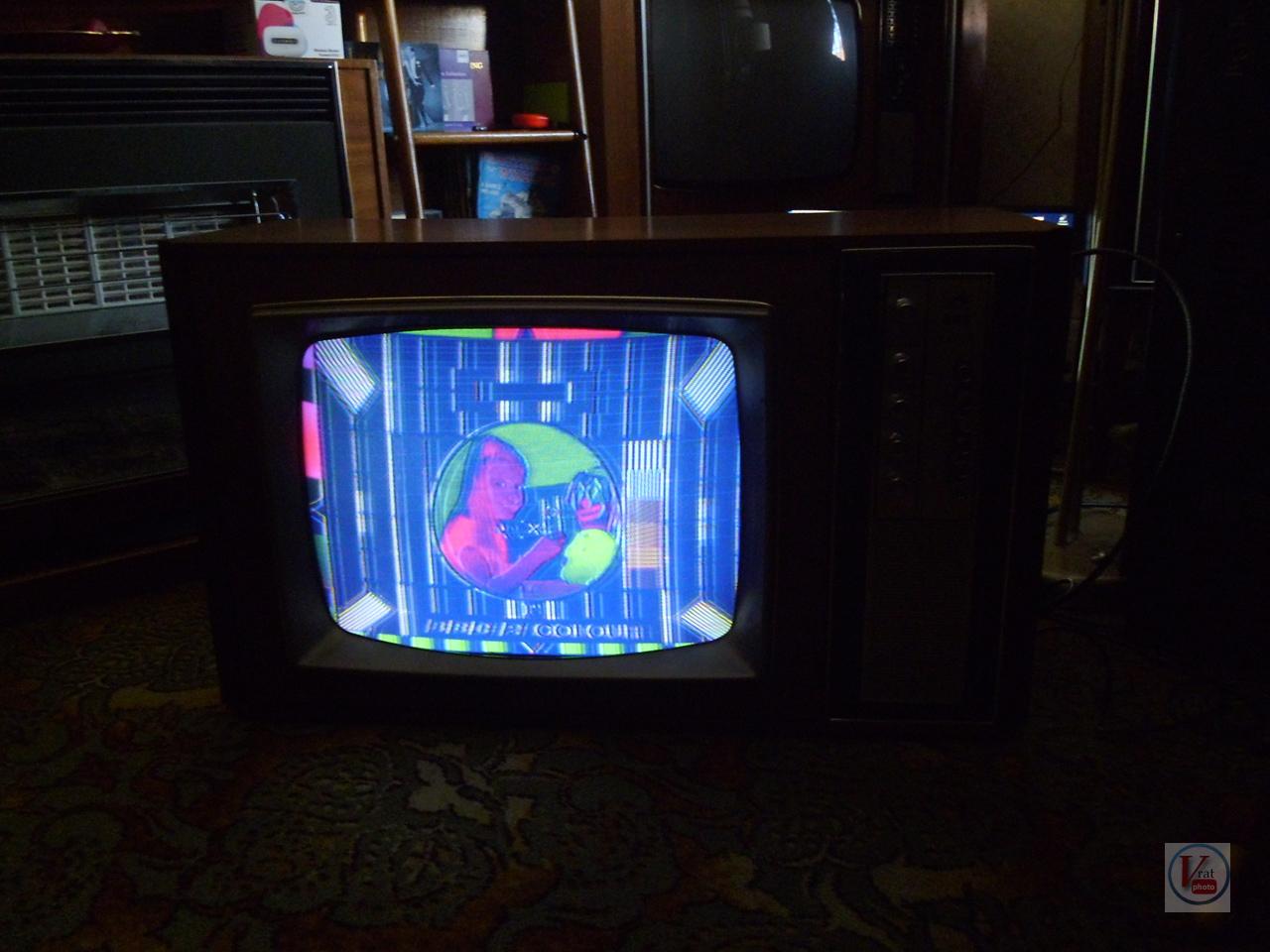 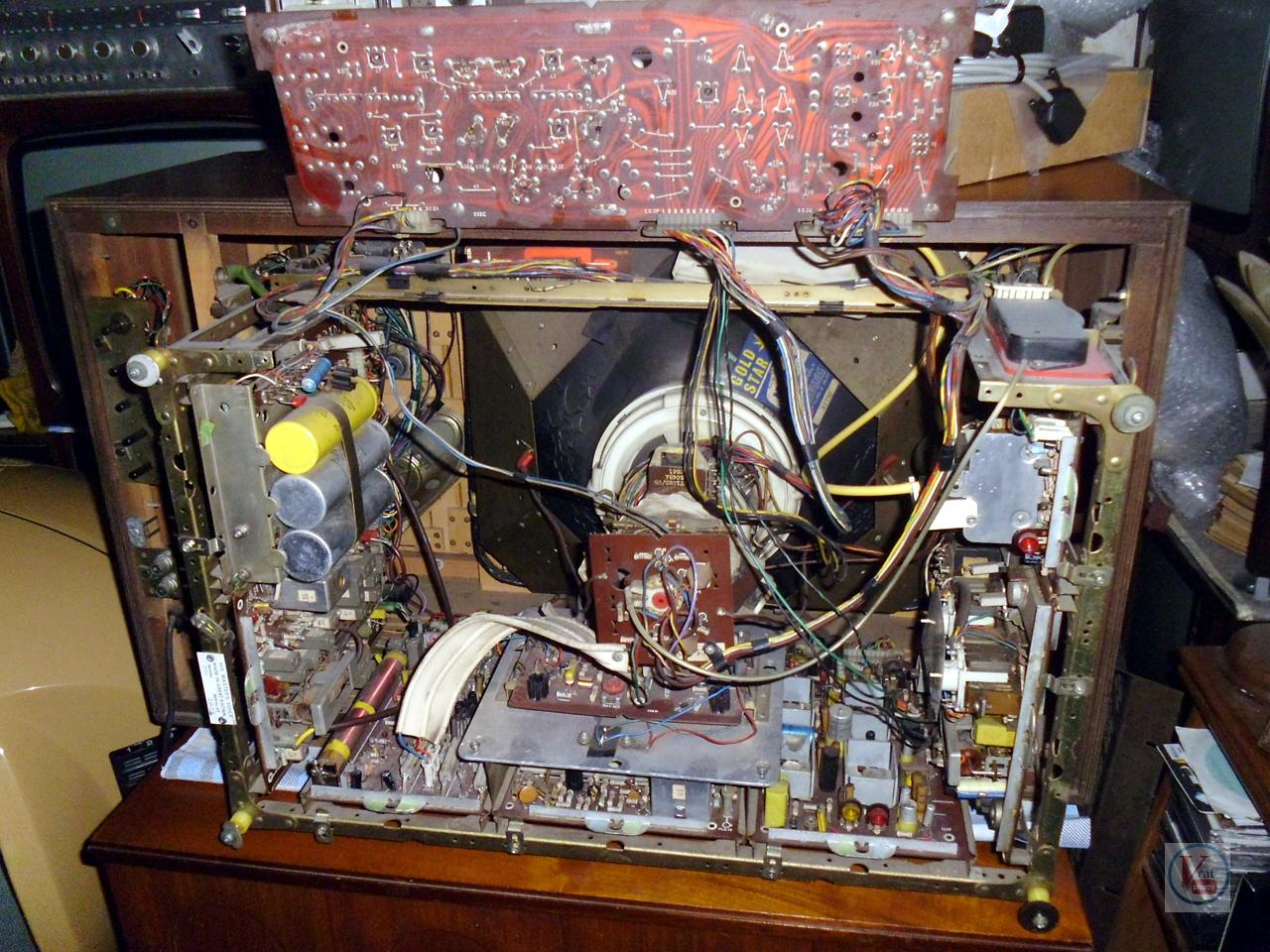 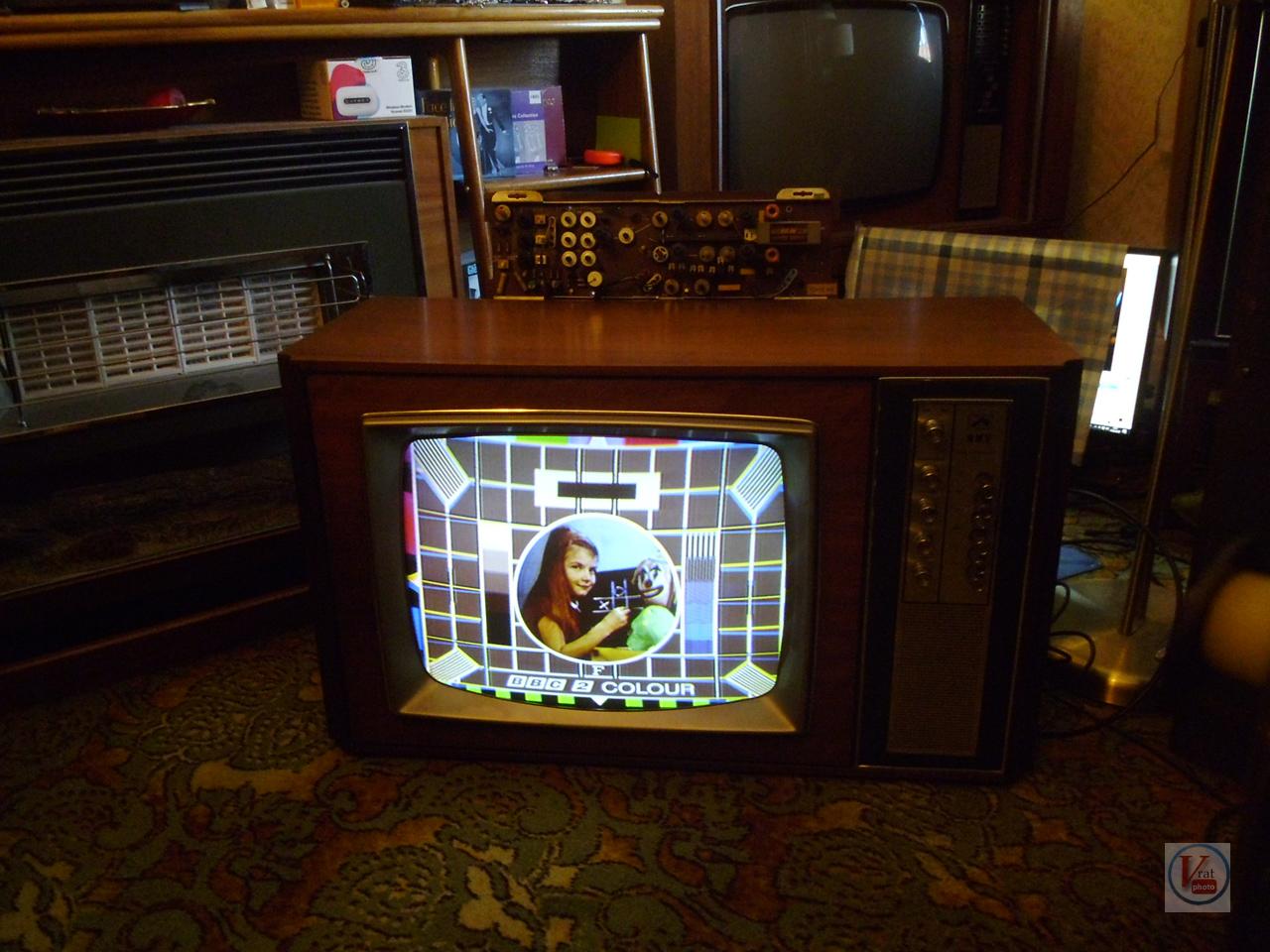 The plan this year is to get all my Thorn 2000’s fully operational, I’ve left them far too long. To keep interest going for myself I’ll rotate

around them and update each blog and forum threads accordingly.

The 2701 system switches are intact and have not been soldered up. However fusible resistors R16, R17 and R18 on the PSU have been removed. Also the micros-switch for solenoid and degauss has been disconnected and looped at PLG/1. These will need to be replaced and returned to original spec. Thankfully I’ve collected the boards to do this. The PCB bench is going to be very busy this year.

I have just read all your exploits with this set, it is proving a rather stubborn set, but I guess regarding It’s age, and unwilling to be brought back to life, due to a rather long early retirement! Good luck with it. I have really enjoyed reading your post. I’m not sure why other members here don’t comment more on these superb “blogs”

Thanks for your various comments on the TV blogs Marcus, they are very much appreciated, sometimes it does seem like I’m reporting to an empty house. Then again I think its because many folk are set in their ways and are only used to traditional forums such as UKVRRR. I’ve long tried to make it clear to folk, this site is way more than just a forum. I’m also still surprised folk miss the opportunity to view the service section available from the up top menu, this contains reams of useful information.

Really nice to see and a worthwhile project

I’m loving reading these articles! Kinda ironic that it’s more entertaining to read about TVs being repaired than actually watching TV these days.