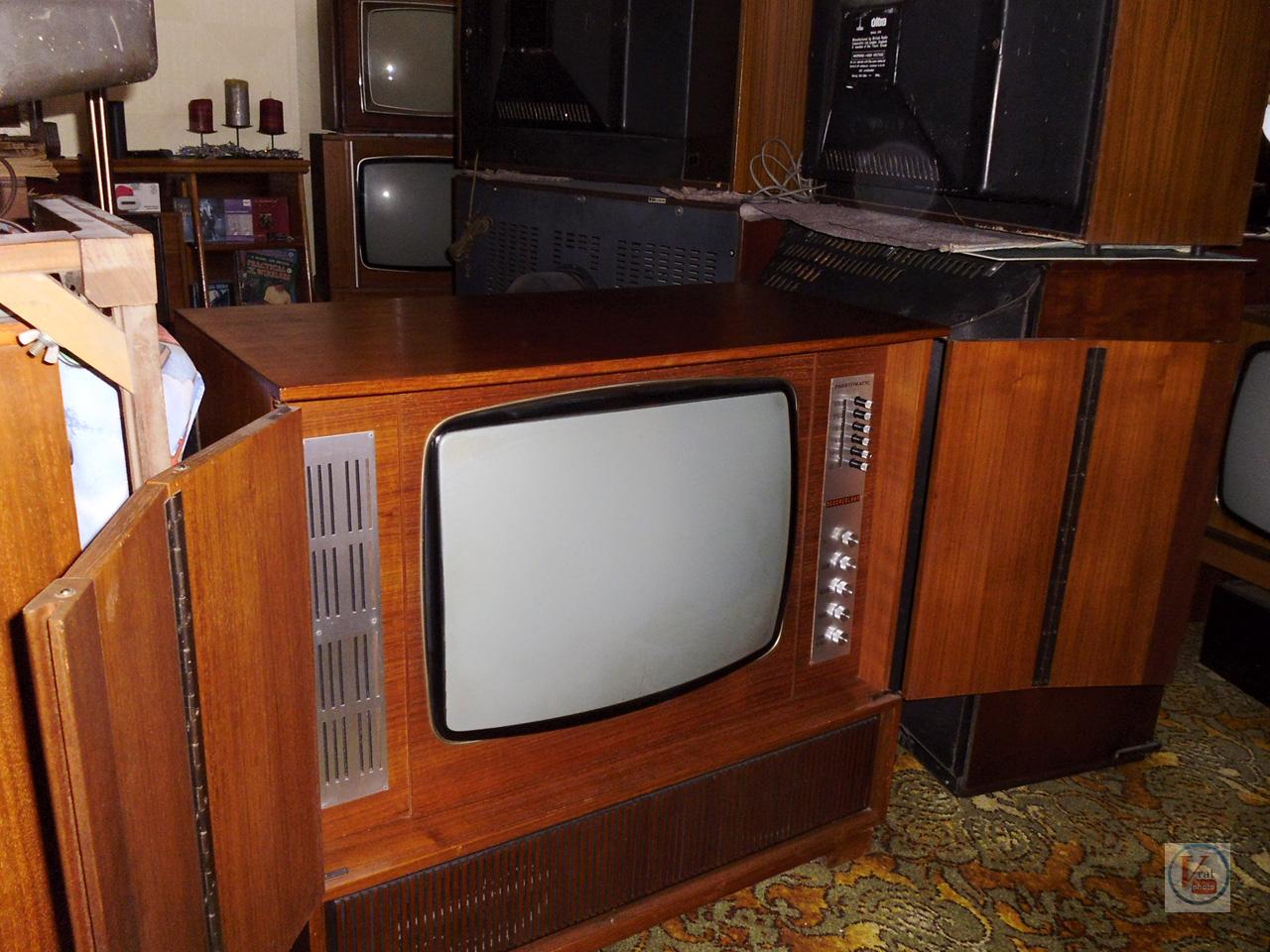 The chassis was designated the “Battersea” the CTV22 is a Dual Standard, Hybrid Colour, however although the chassis is almost identical to my Decca CTV25, The CTV22C does away with valve EHT Generation by using a much safer solid state tripler for EHT. Decca also released this version of the chassis for the CTV25 as can be seen below. 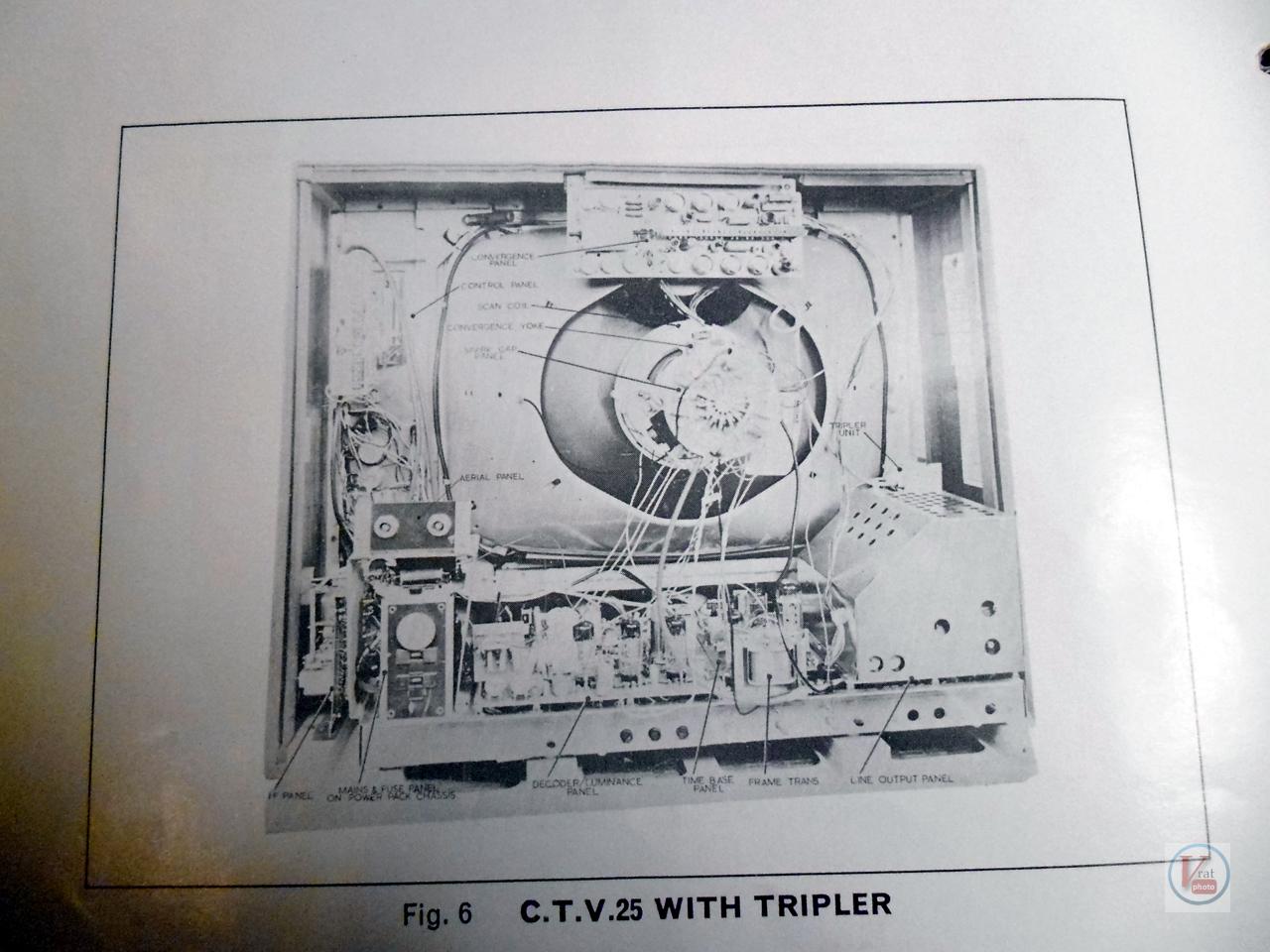 Well hardly any 22″ dual standard hybrid CTV’s were made, even fewer are known to have survived and some are just plain extinct!

The CTV22 dual standard hybrid is a development of the original “Battersea” CTV25. Whilst mainly similar, the CTV22 and CTV25 chassis have some differences. The earlier 25″ sets had 4 main PCBs, whilst the later 22″ and 19″ models were reduced to 3. This was achieved by combining the Luma and Chroma boards, although they were electronically almost identical.

The EHT section was also physically quite different, the later set not having big EHT rectifier/Shunt to contend with, and the PL509 / PY500 were moved to different locations. All this, and the relocation of the I.F. panel meant that the chassis could be shrunk down by a good few inches and more easily fit in the smaller set.

Sets released in time for the launch of colour in 1967 were either 19″ or 25″. By the following year 1968, the  22″ dual standards made a brief appearance and only made for a very short run, I think one year. Once all the channels went colour around 1969, manufacturers eagerly switched to the simpler single standard, you’ll find lots of Single standard 22″ sets.

Only 5 manufacturers bothered with 22″ dual standards, this 22″ Decca is one of those super rare examples of what was probably one of the last Dual standard colour hybrids. It filled the short gap between the Decca CTV25 and the much loved Decca Bradford. As I mentioned at the start, you will be hard pressed to find any 22″ CTV duals as there were not many manufactured in this period, in fact  there were only five others.

The only other 22″ colour dual standards were made by :-

I plan to only repair not restore and in no way modify it from the original spec. These 22″ dual standard hybrids are just way to rare to be messed with and deserve to be preserved to represent their unique place in our early colour tv heritage.

The original I.F. panel had been robbed long ago to fix another set.  The original tuner suffering the same fate, the good news being the set came with a bag that contained another tuner and IF panel. Also in the intervening two years since I acquired this set, I’ve managed to gather additional panels and spares to maintain the CTV25 and CTV22.

There’s loose and cut wires all over the set and one or two just laying on the chassis who knows where they come from, a lot to contend with just with them. There’s a split Mullard VA8650, a wire disconnected from the scan coils and what looks to be the degauss plug floating. There’s no single switch to change standards, it operates on channel change/micro switches, there’s a Bowden cable and a solenoid which again is all disconnected. One of the fuses is missing on the power pack. Other than that everything seems to be OK with no apparent missing components or cracked PCB’s. All the control knobs were missing but thankfully I have quite a stock of CTV knobs and the correct ones were found.

At this stage I’ve no idea how it all goes back together, thankfully I have the full Decca workshop maintenance manual that covers the CTV25 & CTV19. 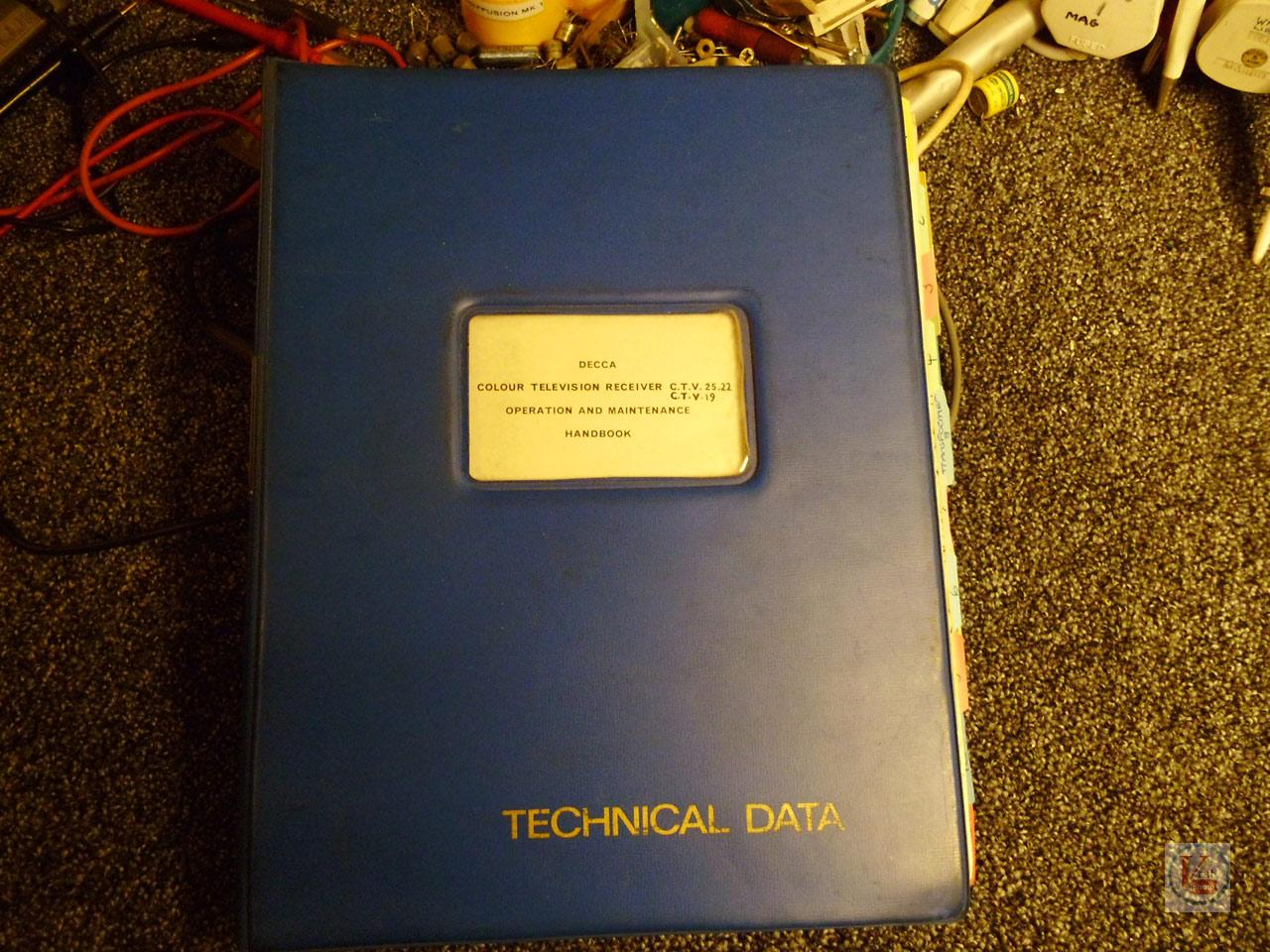 The cabinet was scrapped down and re-oiled which can be seen below now looks in top condition. The plan is to try and get this set up and running in time to mark the 50th anniversary of the colour launch in on July 1st 1967 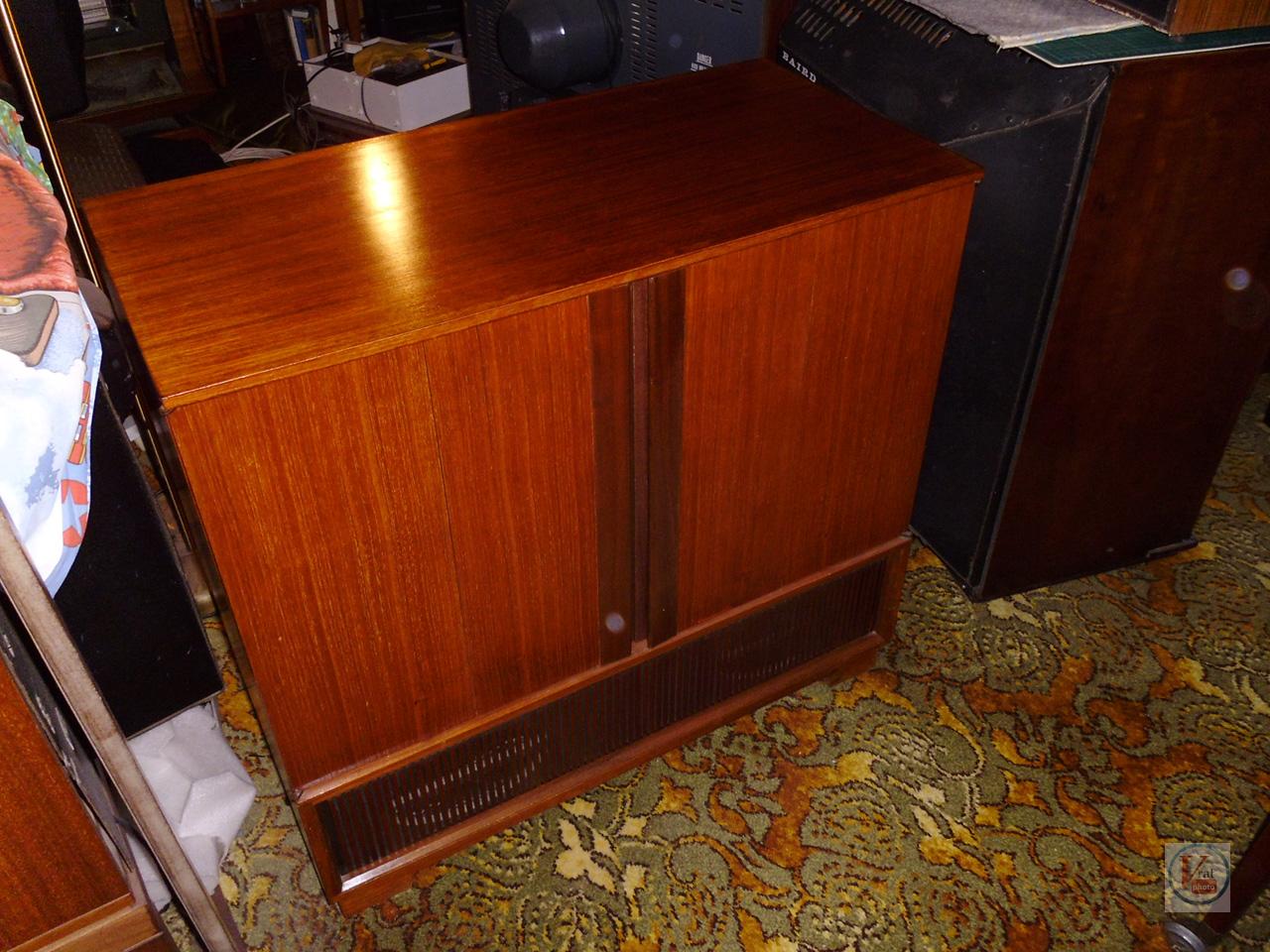 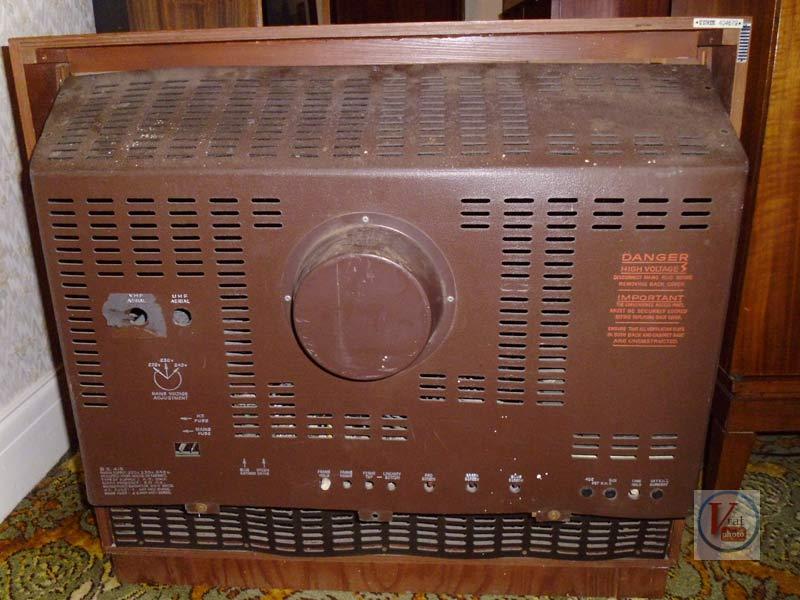 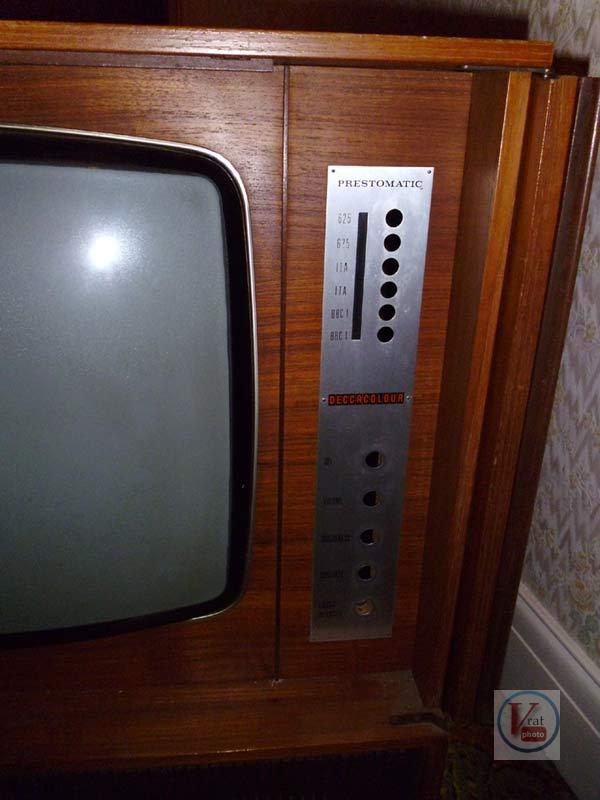 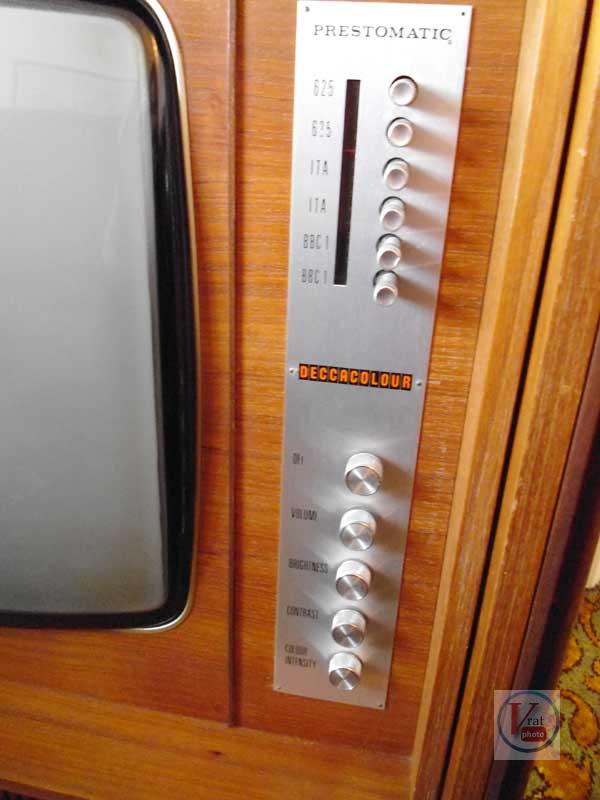 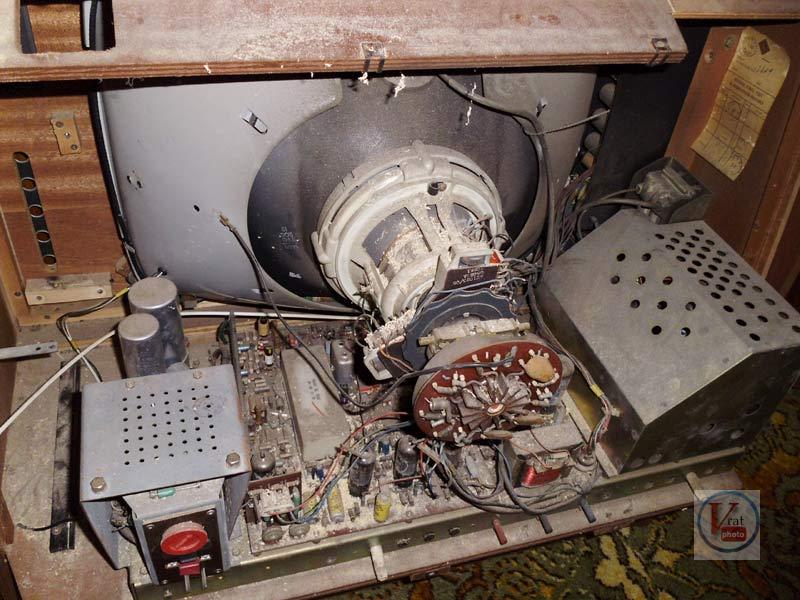 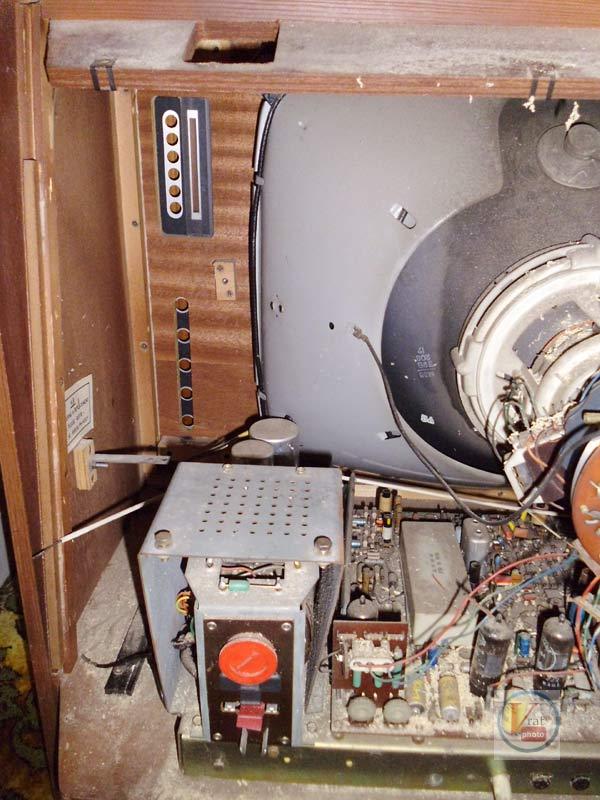 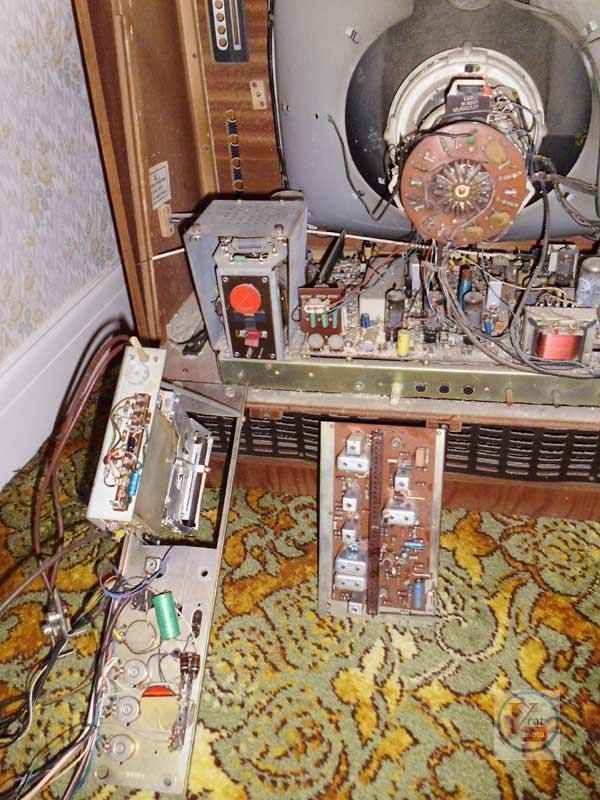 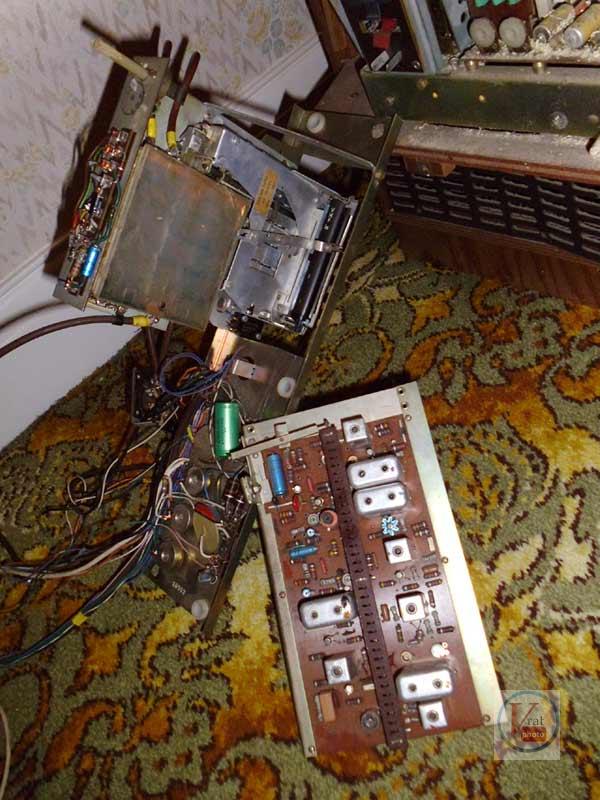 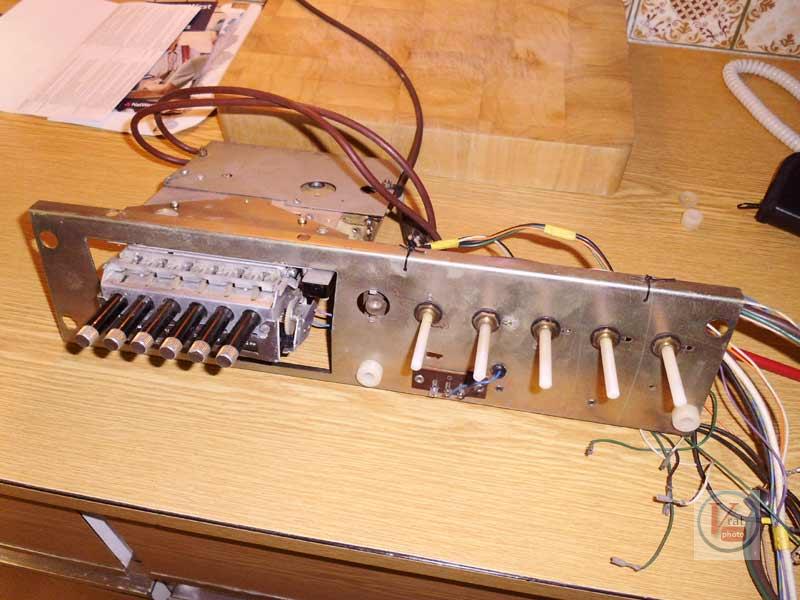 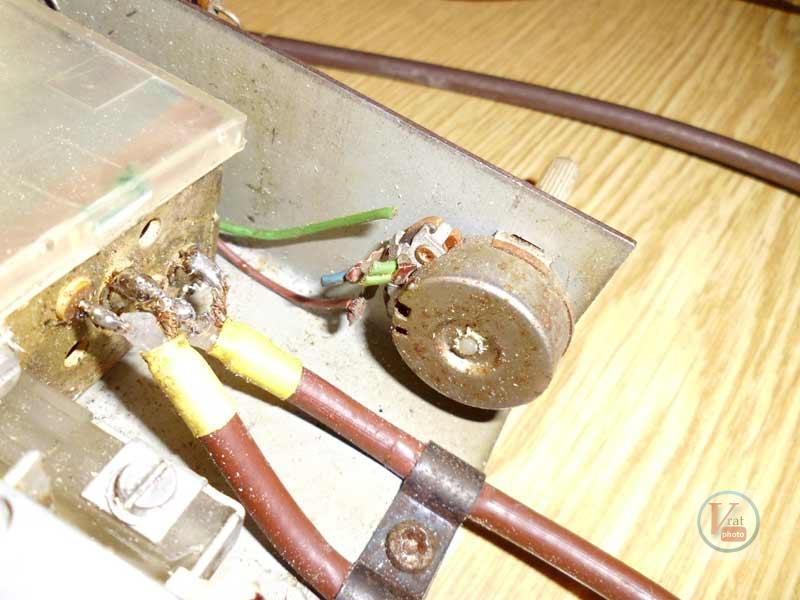 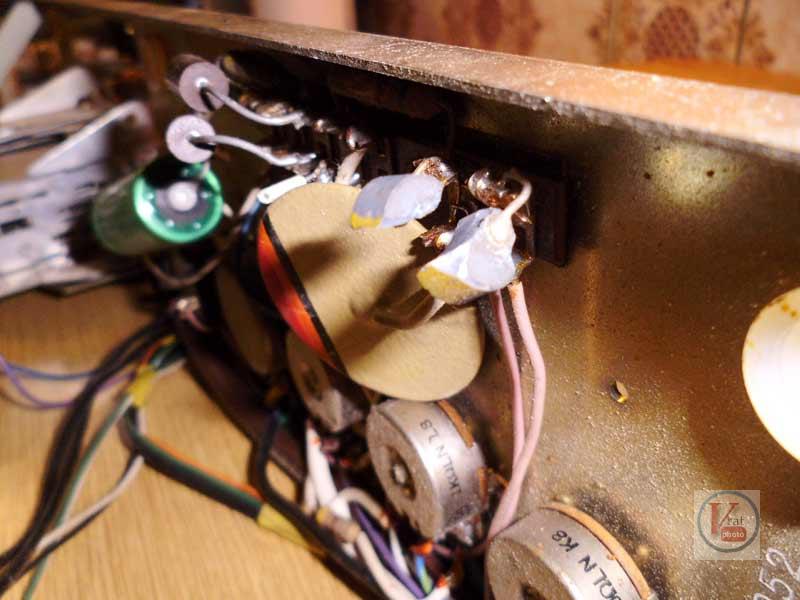 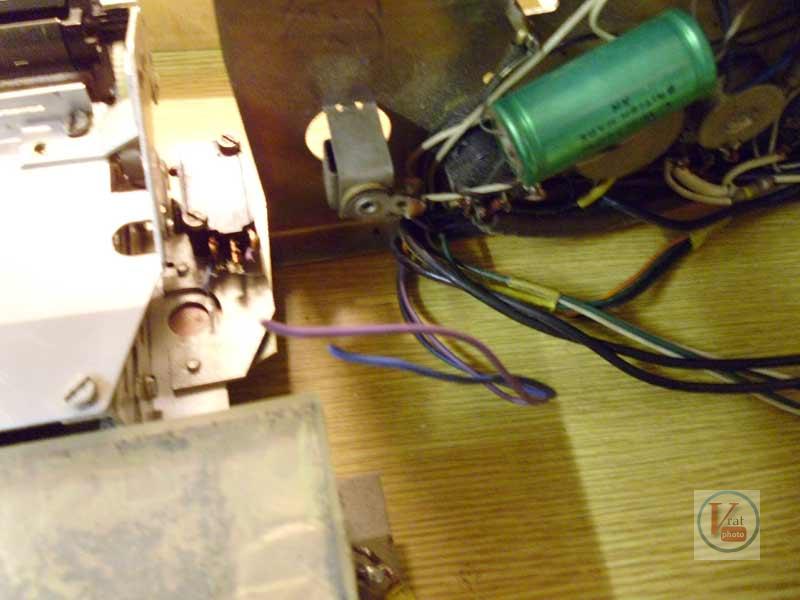 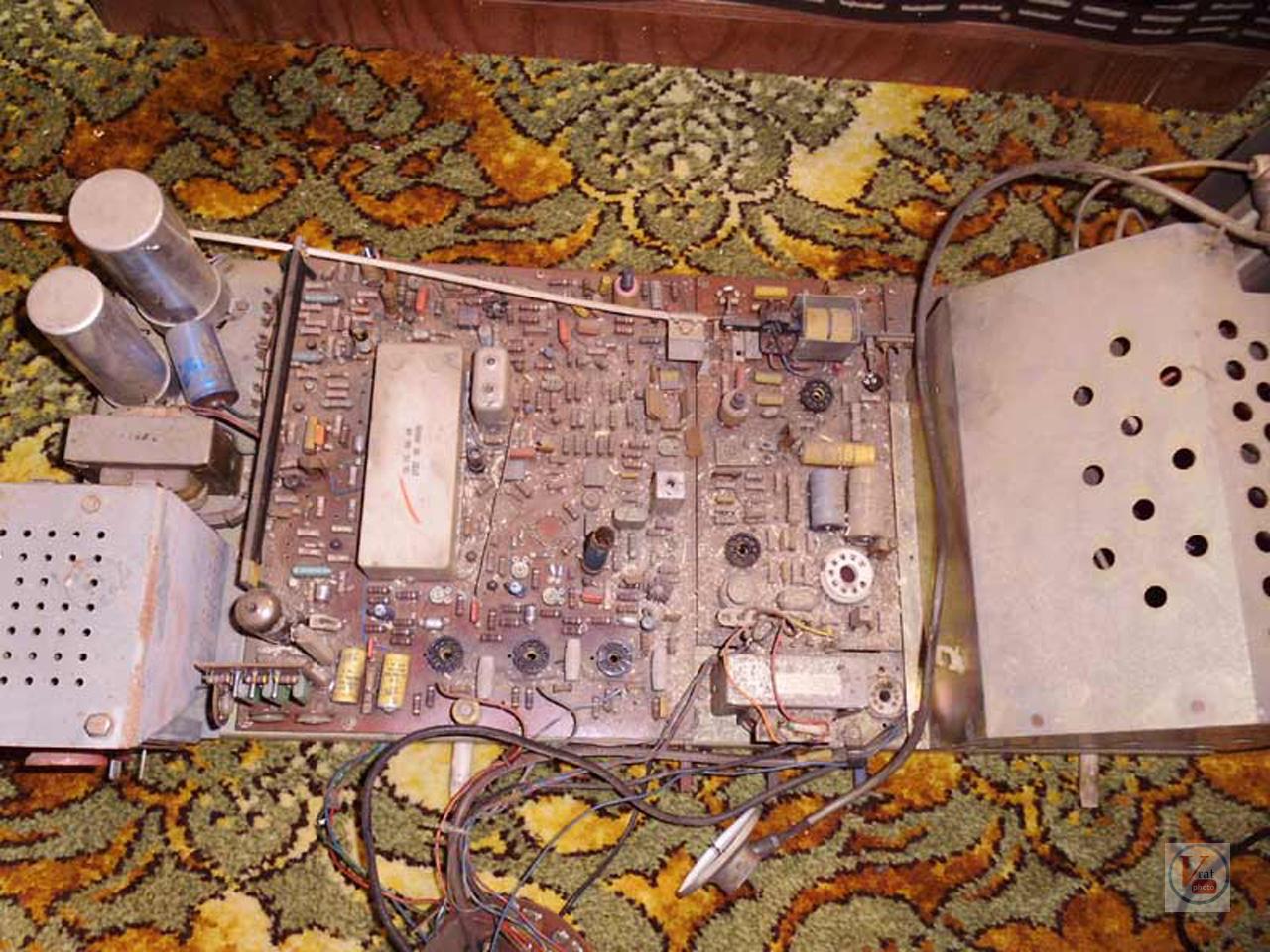 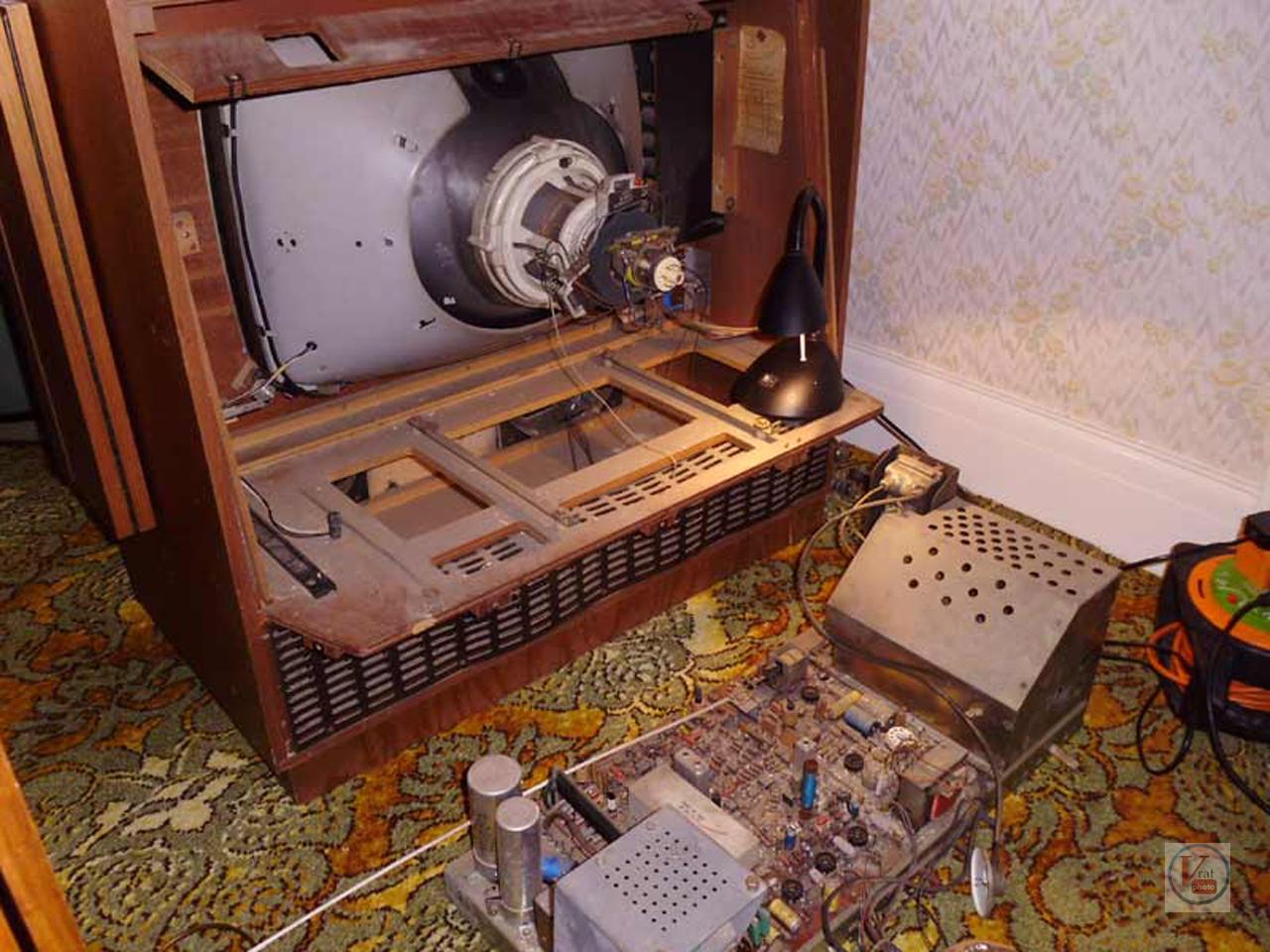 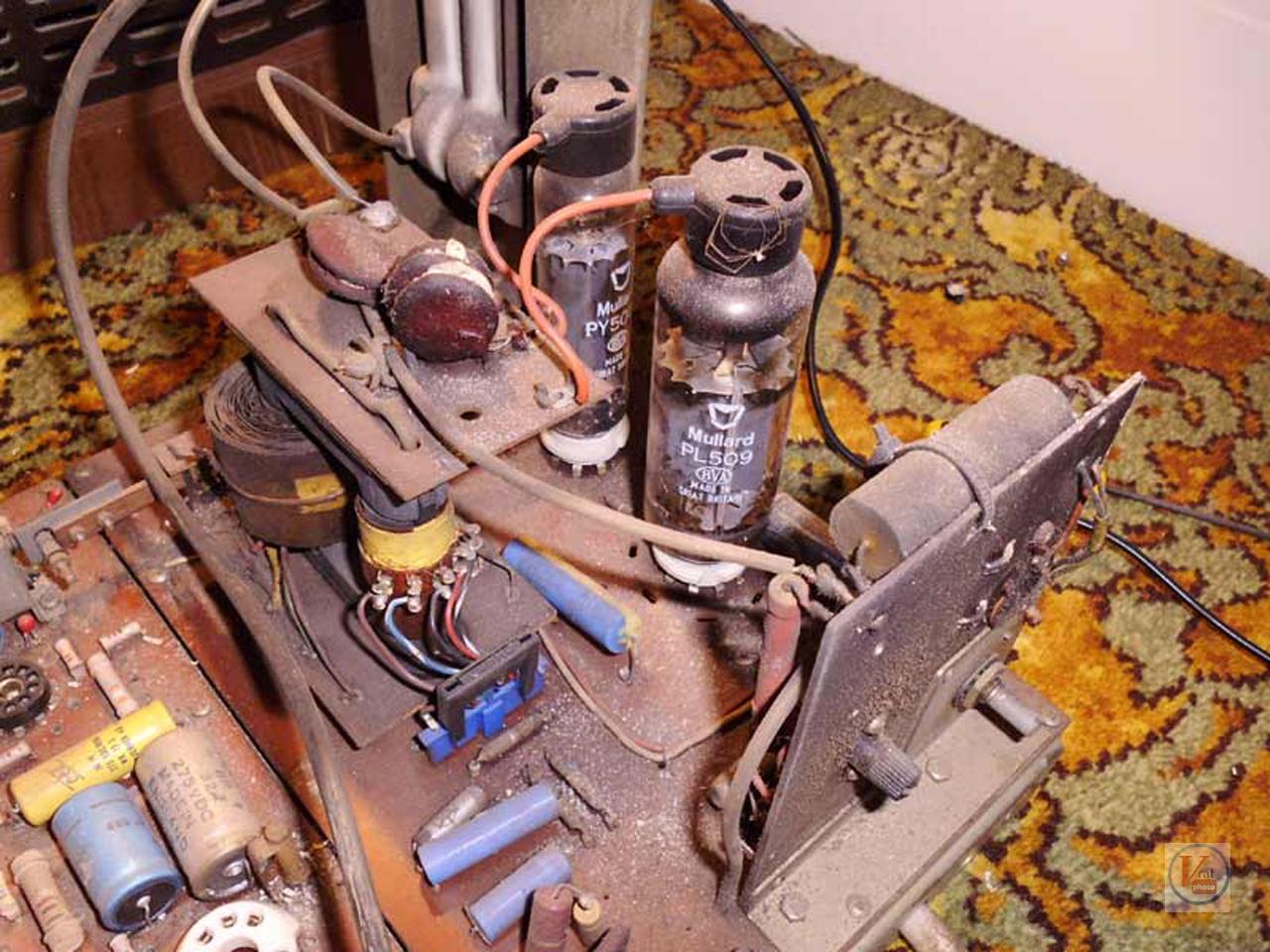 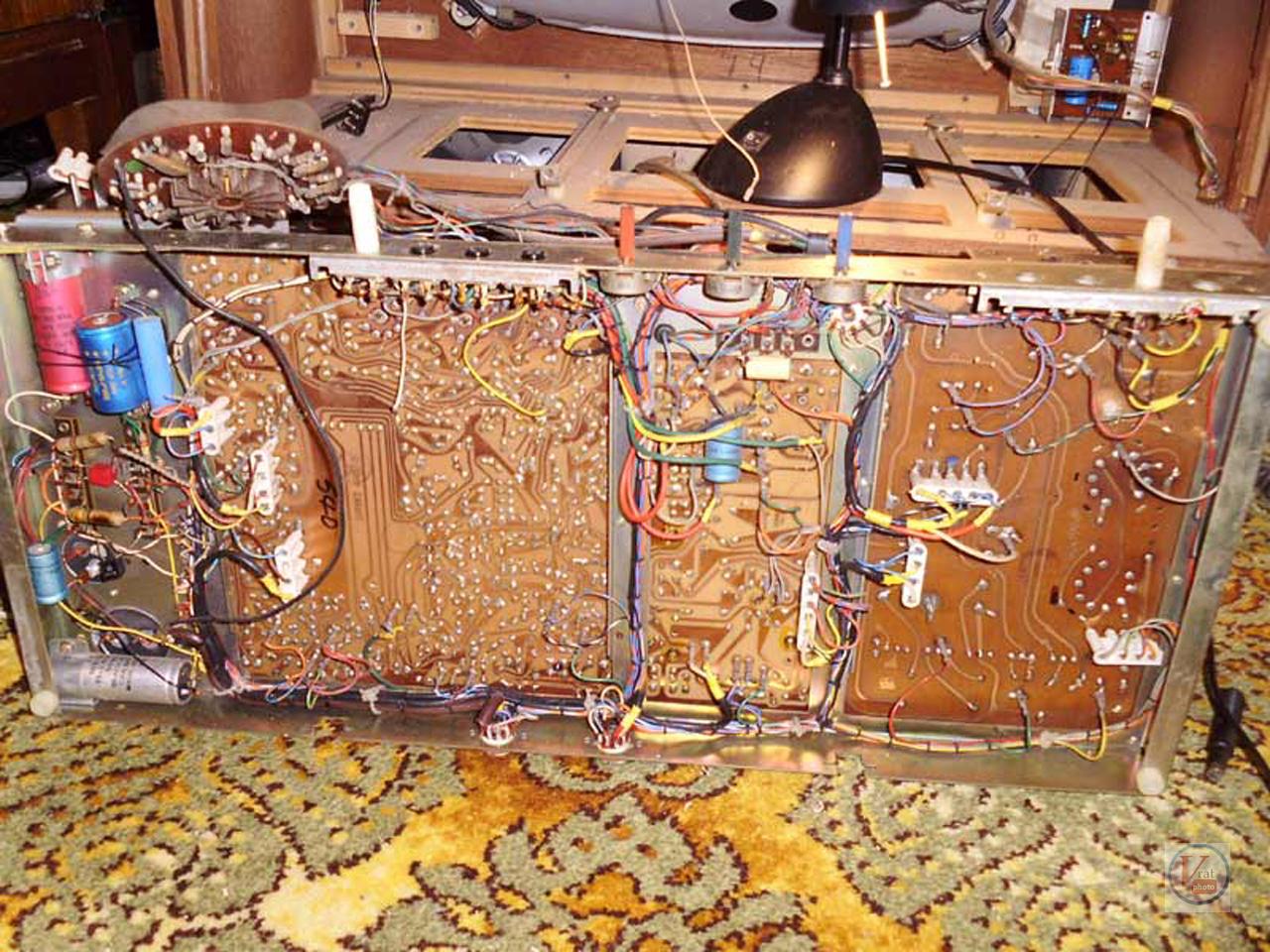 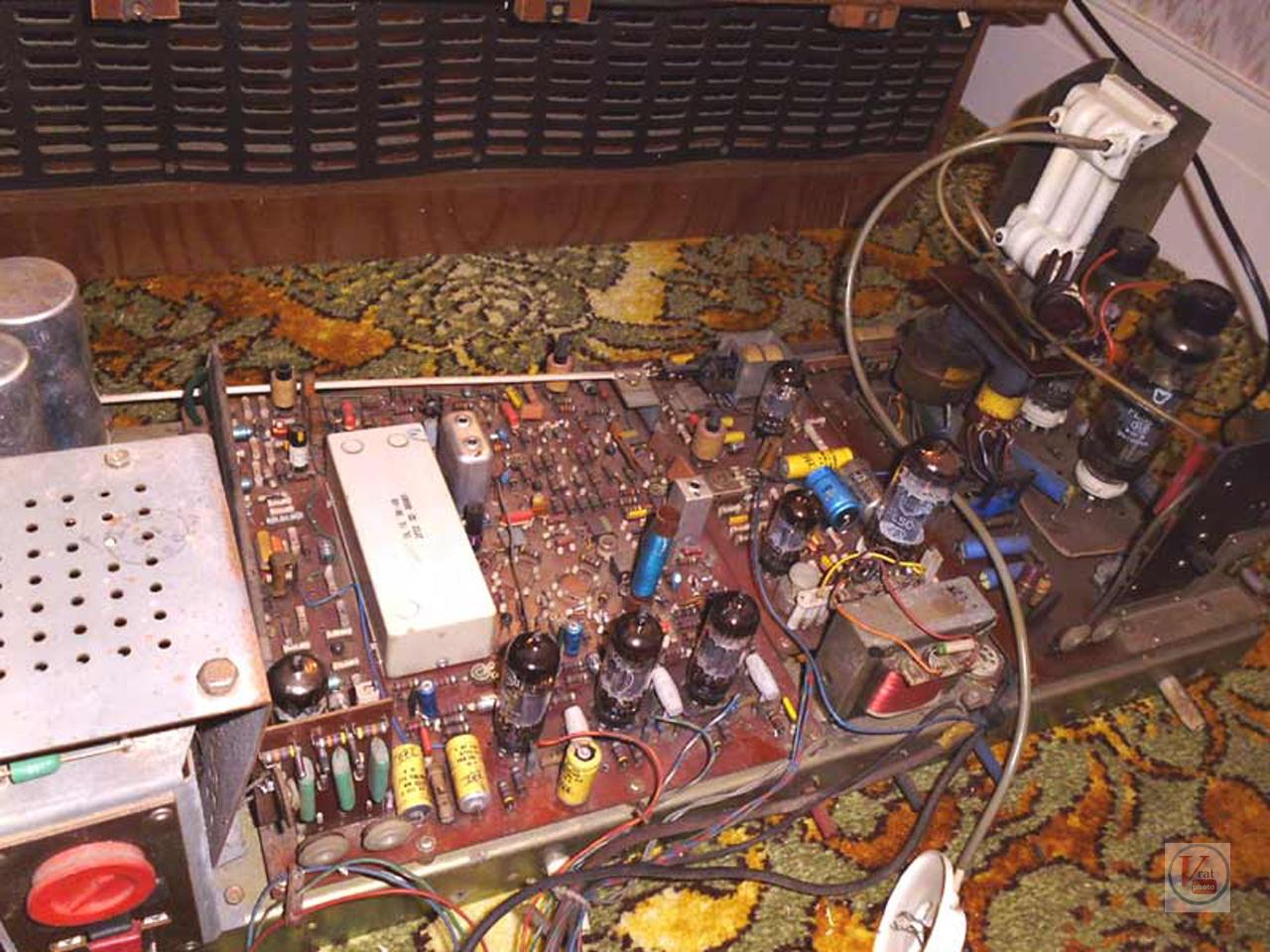 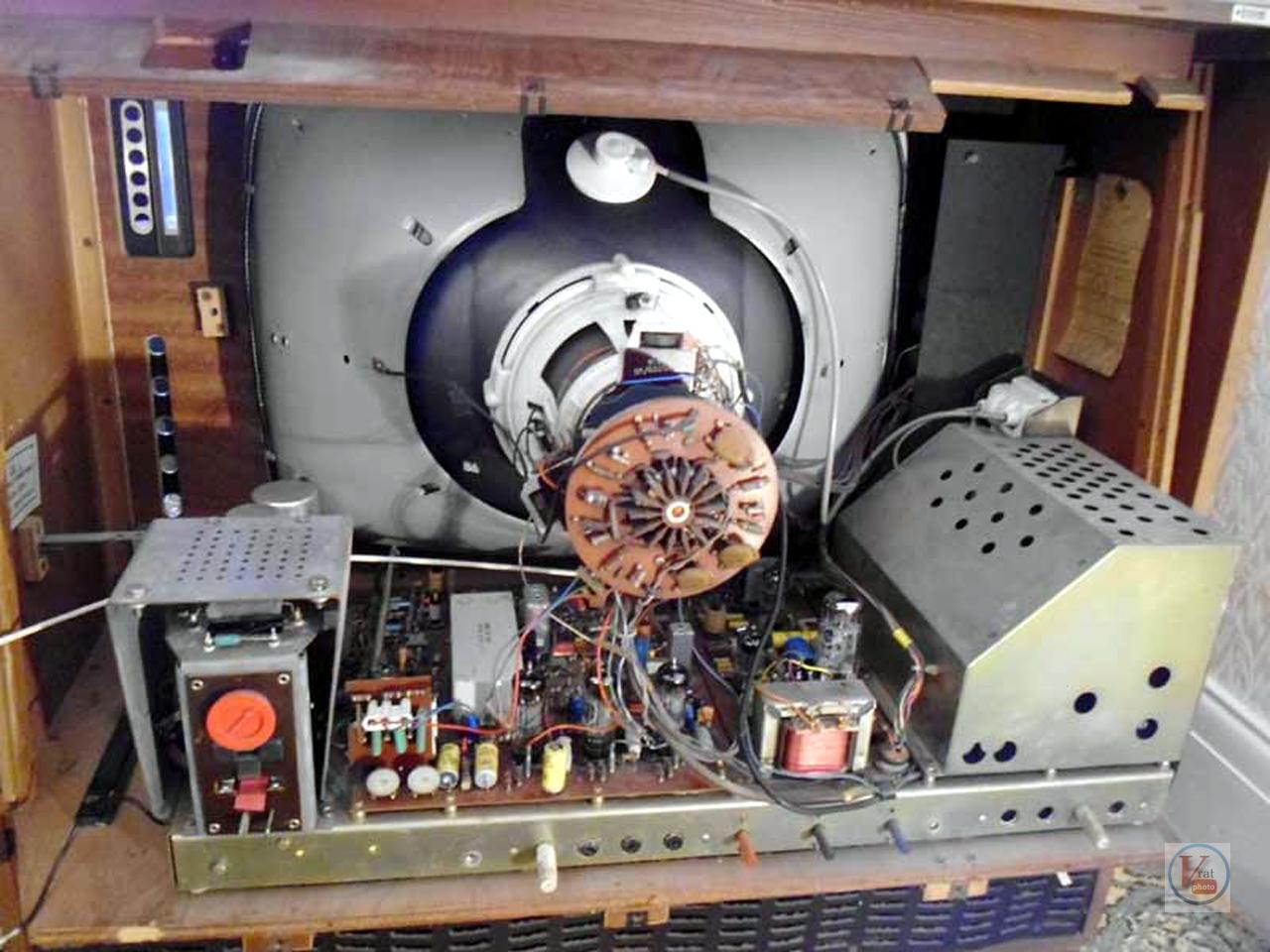 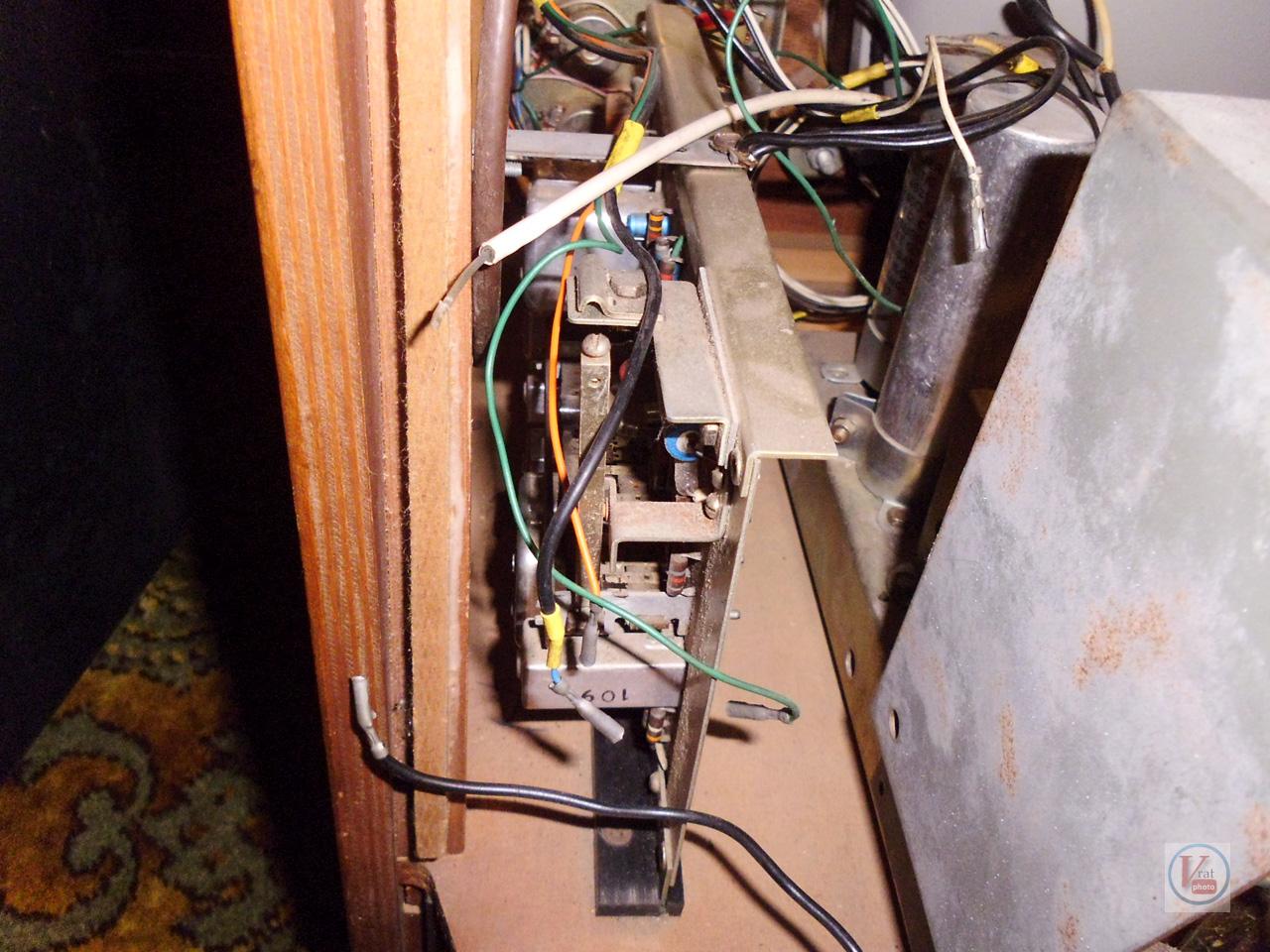 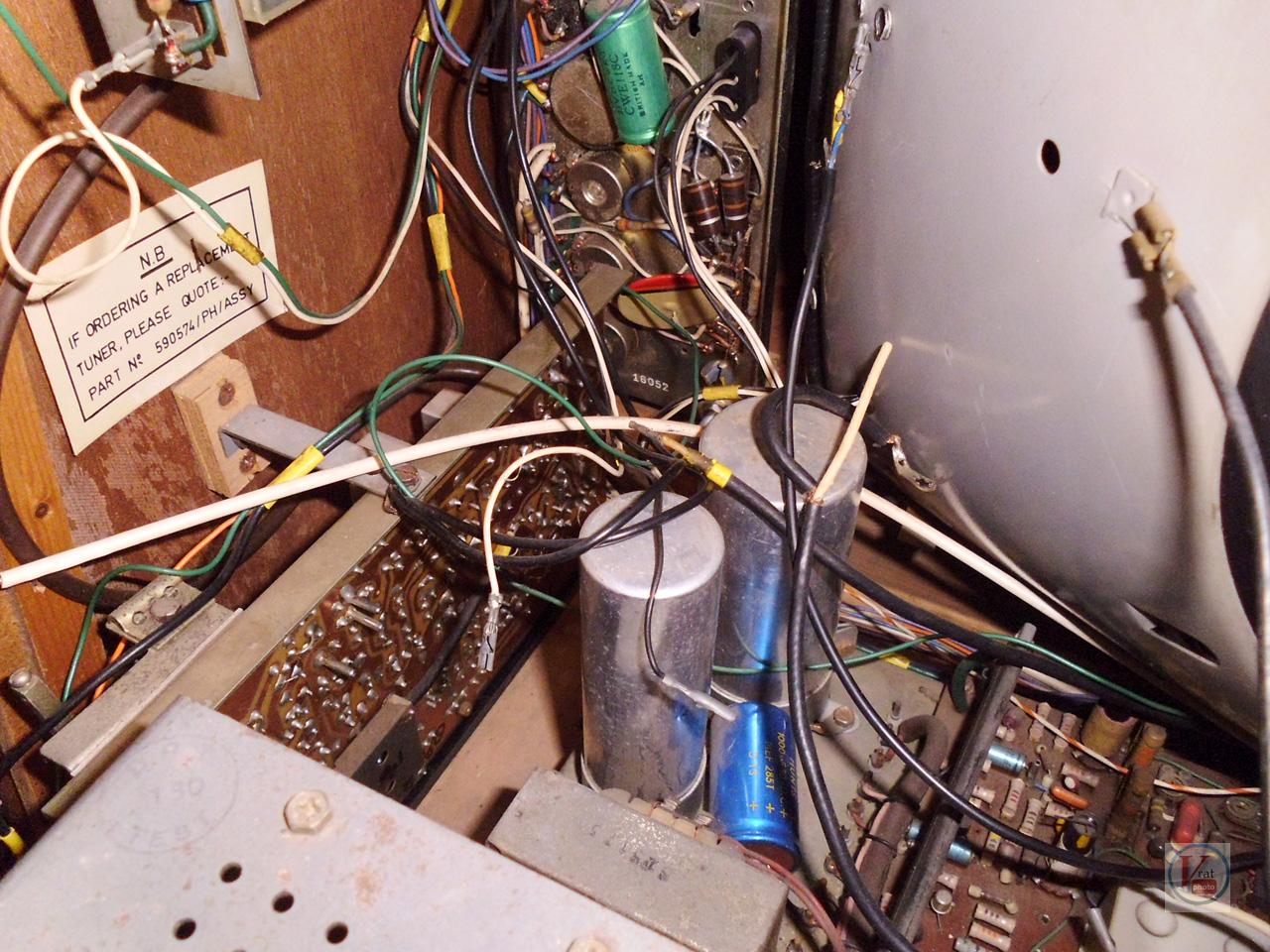 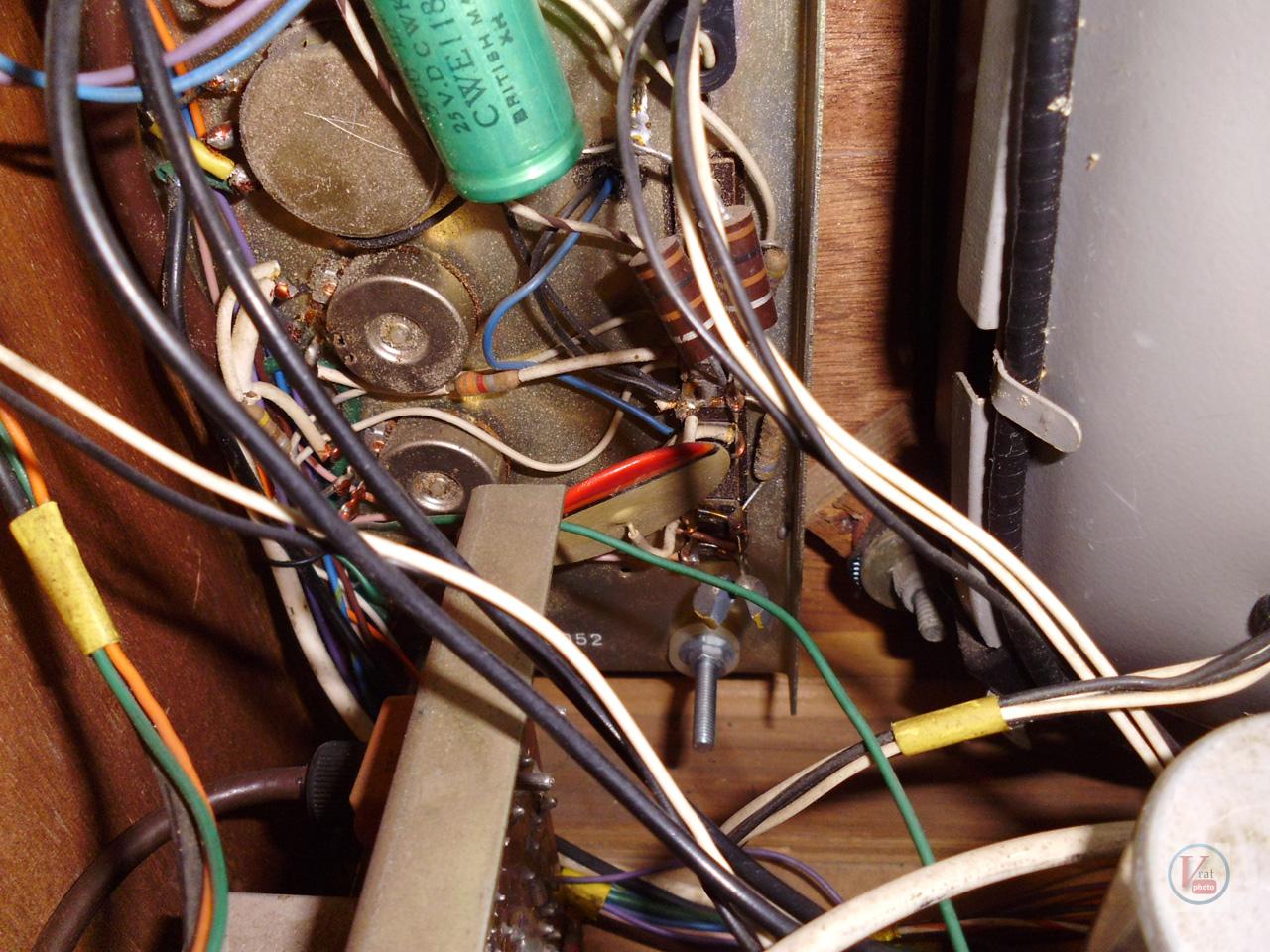 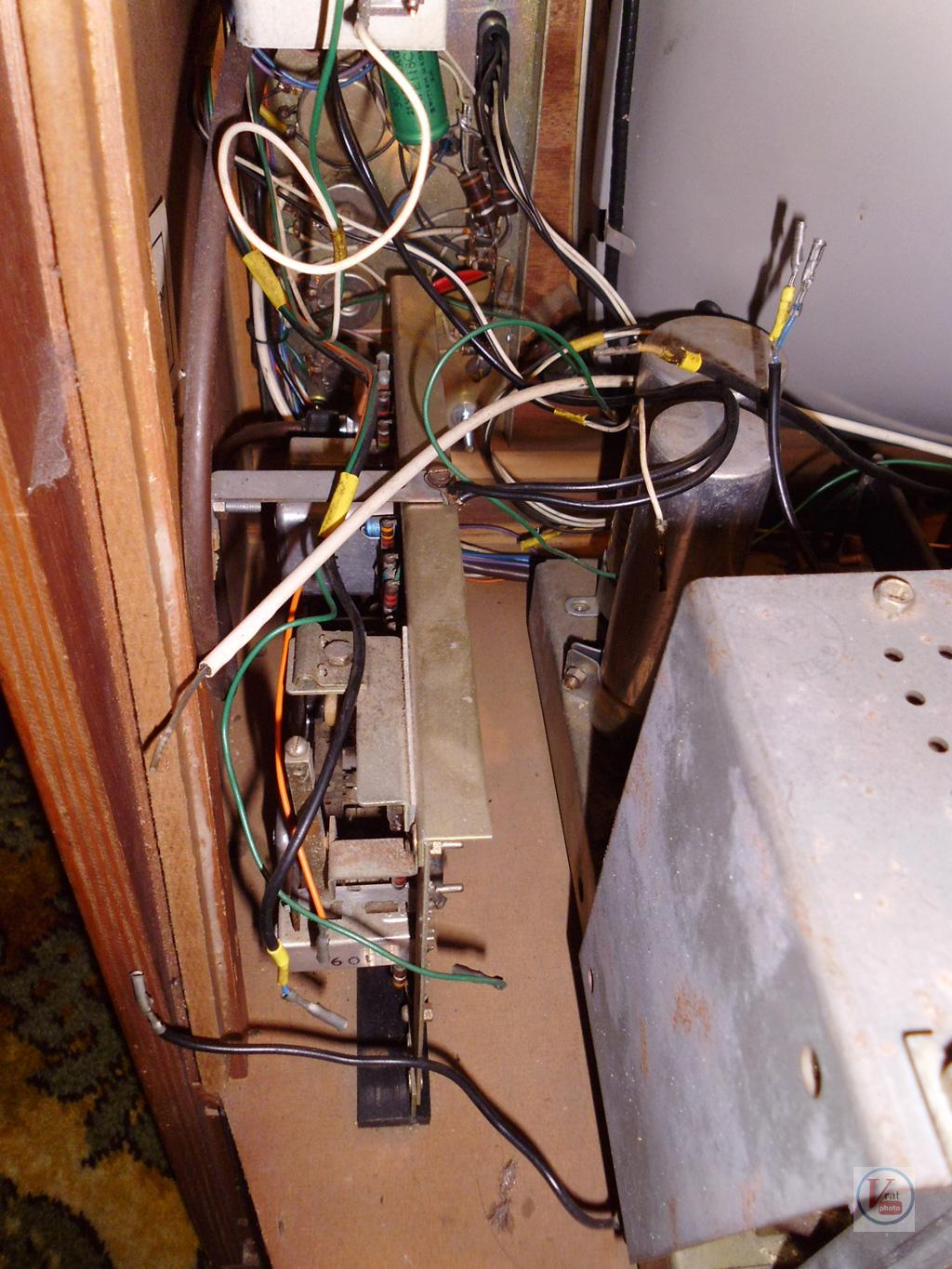 The CRT is probably the worst I’ve come across. On occasion I’ve had lowish emission on one or two guns, never all three and never as bad as this! 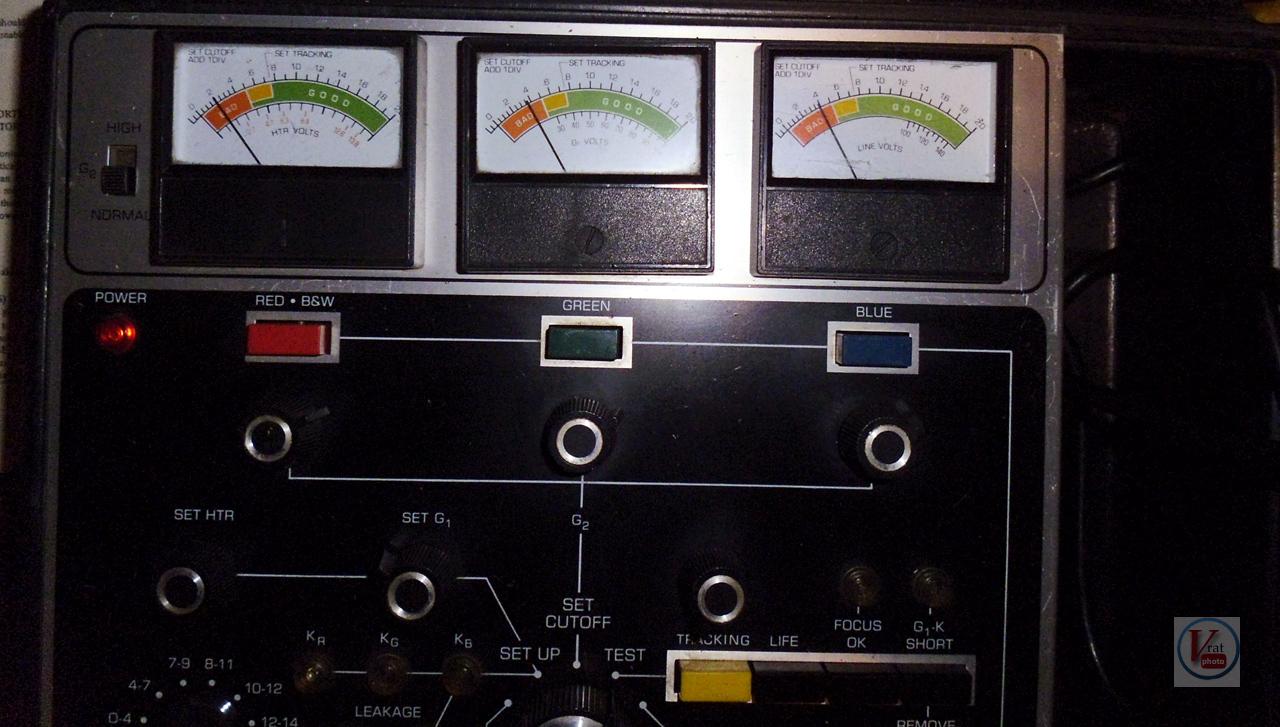 Considering the mess the sets in, it seems to have been treated to a rough and hard life. I could give it a tickle but this might not work, I’ve had it running on the B&K for a while and rather than seeing emission rising hoping the cathode/s might recover, the emission is dropping off even more.

A tickle might strip whats left of the emissive layers, If it did mange to recover after a bop I seriously doubt it would last very long. Having said that I’ve been proved wrong before, the Ultra 6714 is the prime example of not giving up until the rotund lady sings.

No length of time running this CRT produced any further emissions so as I had nothing to lose, I decided to use the B&K clean & balance. This has now restored emissions and should allow this set to give a very good picture. Now the daunting task of figuring out where all this ripped off and snipped wires go to, not looking forward to this part. 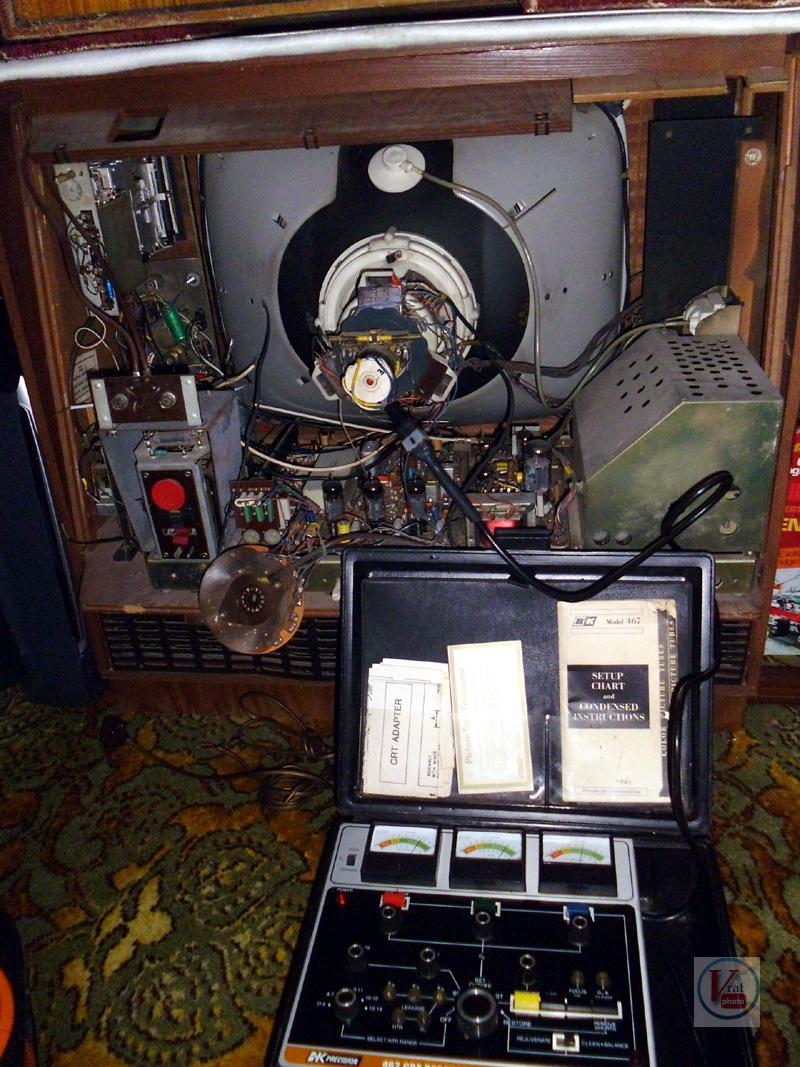 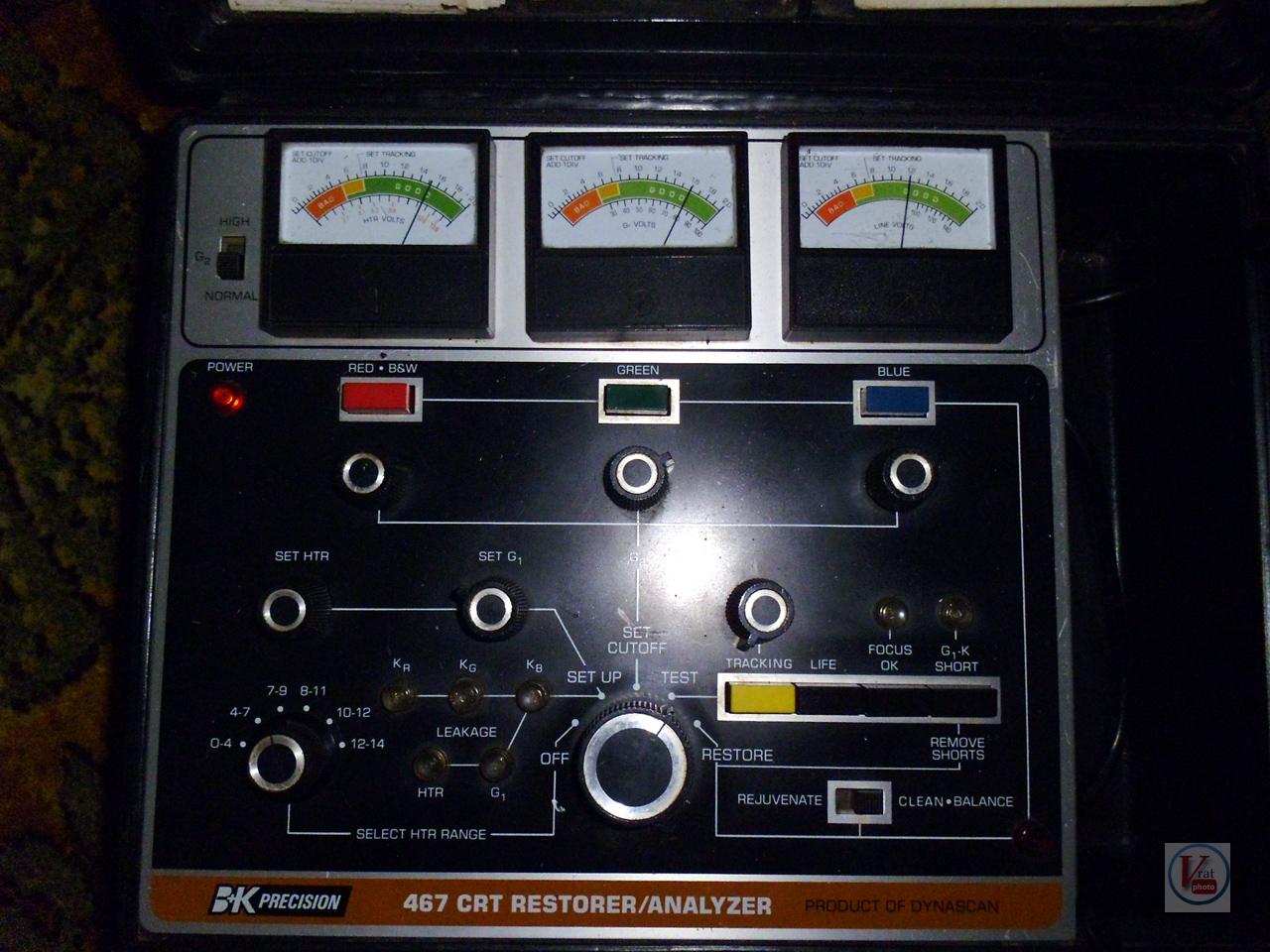 Well it’s pleasing to see the set is now having a better life at the CTV hospital and the prognosis is good.

A lovely trip down memory lane!

I did live in Barrow-in-Furness at the start of colour in 1968 having served my apprenticeship at Dalton Radio! In 1966 I started with ”Rentaset” which later was swallowed up by ”Radio Rentals”. I became one of only 12 Engineers to be trained with Colour Qualifications, my service area being Carlisle down to Preston in Lancashire, the training school being in Sterling-Scotland. Eventually more and more were trained especially the ex ”Rentaset” Guys.

Now well retired my hobby and life still hinges around television. I would dearly love to aquire a D/S set, either a BRC2000 or believe it or not a BAIRD 700 series or the BAIRD 705 (GEC2028).

Thanks to both of you for the comments on the Decca blog, to be honest I’ve not really done anything of any significance, on any TV since around April!

Like many others on here, I sort of lost interest back earlier in the year. The Baird M718 I was working on still sits on the main bench stalled with the i.f problem. The Marconiphone 4711, still in pieces, its PSU and LTB sprawled, part repaired on the PCB bench. The chances of getting around to this Decca to address all mess of cut and loose wires any time soon, looking grim. Being almost bonfire night I need a rocket up my posterior to get me going again 🙂

As for finding a Thorn 2000 set or Baird 700 series, I’ve only seen two turn up on e-bay in the last two years and both fetched extremely high sums. Expect to shell out likewise if one does crop up.

Just a quickie to say that whilst I’m laid up recovering from my hernia operation, your blog is giving me lots of interesting reading matter and hopefully the kick start that I need to tackle a few sets that have been requiring attention for months or even years! What ever happened to this big old Decca?