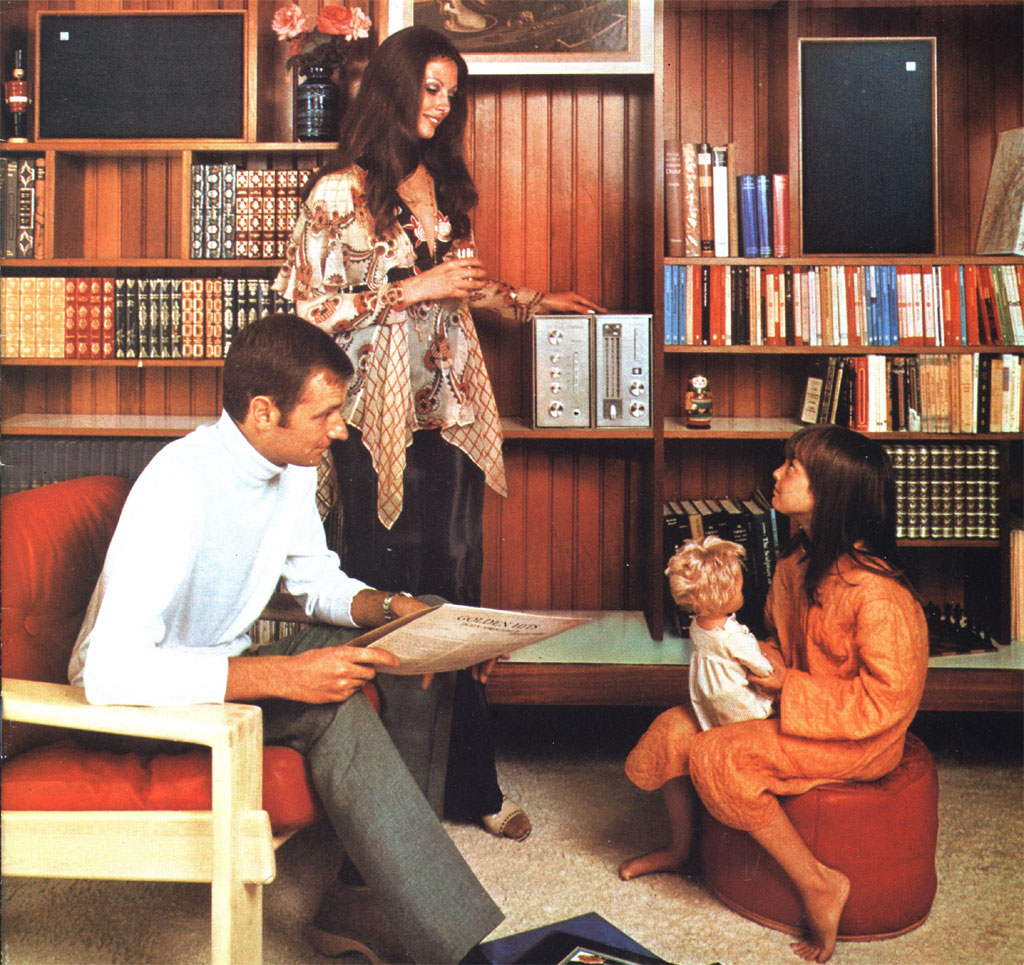 Firstly the service manuals for these following items are located in the service data library. It includes, circuit descriptions, plan views, component listings and schematics.

For some considerable time I’ve been looking for a small audio system for my late 60’s early 70’s themed room. I had considered a Sony TA-88 with an ST-88 or the Goodmans Max system. On e-bay I’d found an ST-88 and thanks to the kindness of forum member Colin (Turretslug), just before Christmas he gave me a Maxamp30 which he’d stored away some thirty years prior. Back then one of the channels was low which was cured with a replacement transistor.

For Christmas my wife had also sourced me the accompanying Goodmans “StereoMax” Tuner to complete the set. Of course I don’t have the original speakers and I doubt I’ll find them as the “Maxim Bookshelf” pair fetch ridiculous sums ( a pair on e-bay currently at £500). I do have some very nice Grundig round “Hi-Fi Box” speakers currently attached to my Grundig RTV 900 which could be pressed into service, though I would prefer to have some woody speakers. 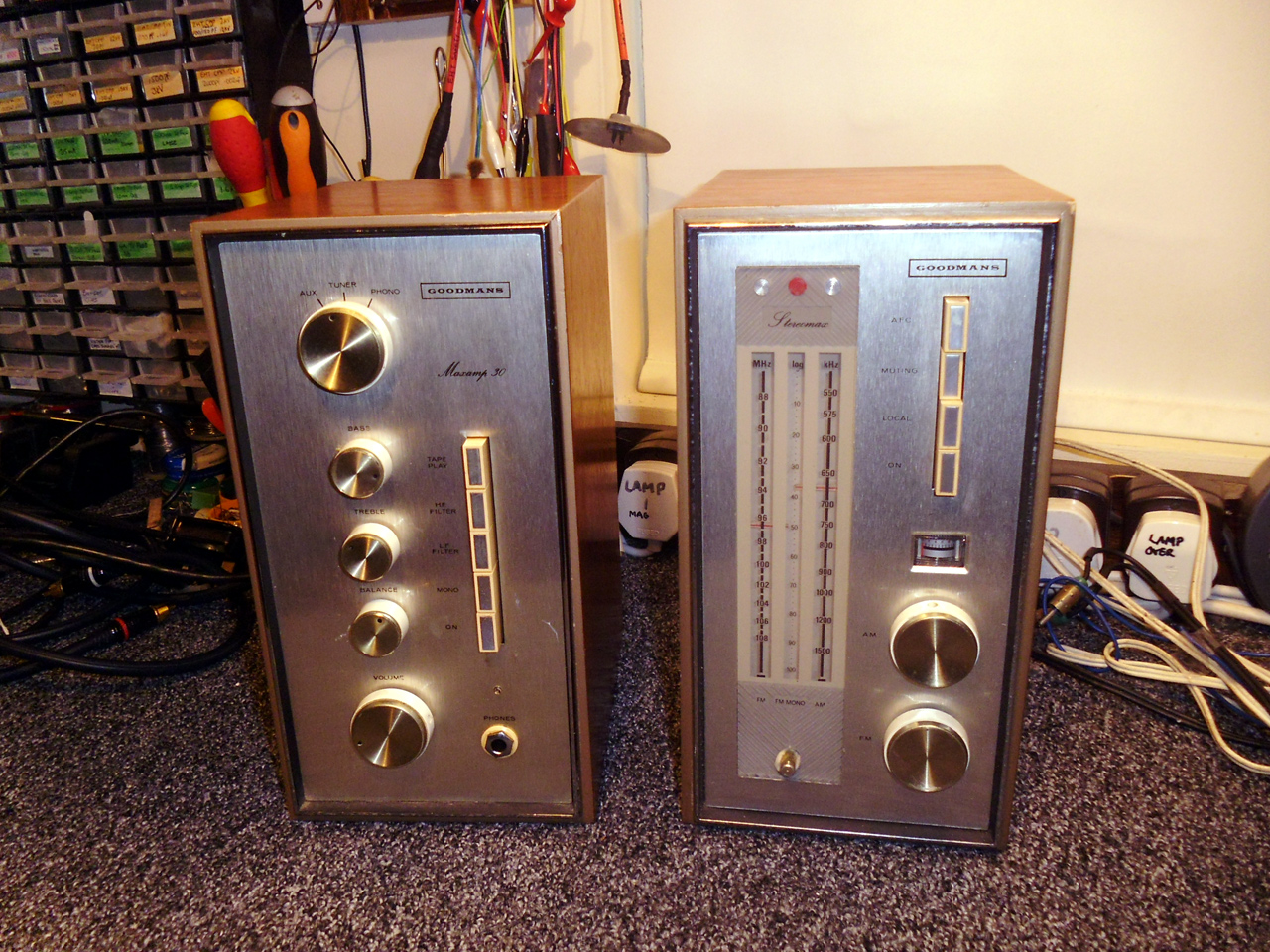 The amp is nicely constructed and easy to get at for servicing and is in very good condition. A few problems noted such as switches and pots but you’d expect this of a 50 year old amplifier. 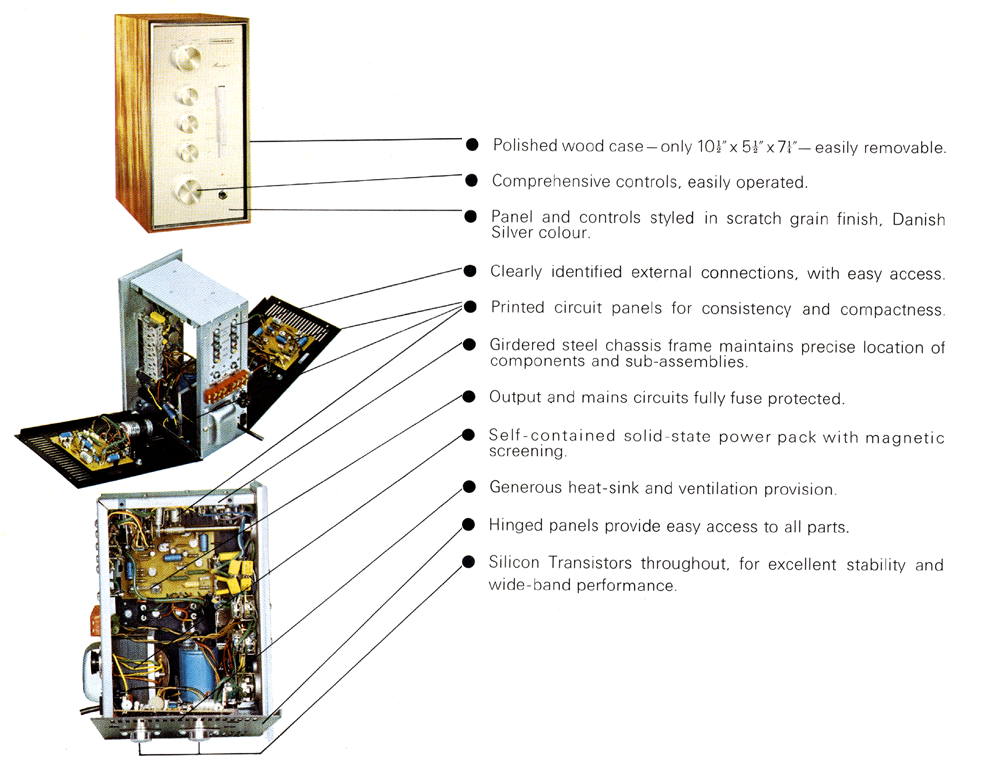 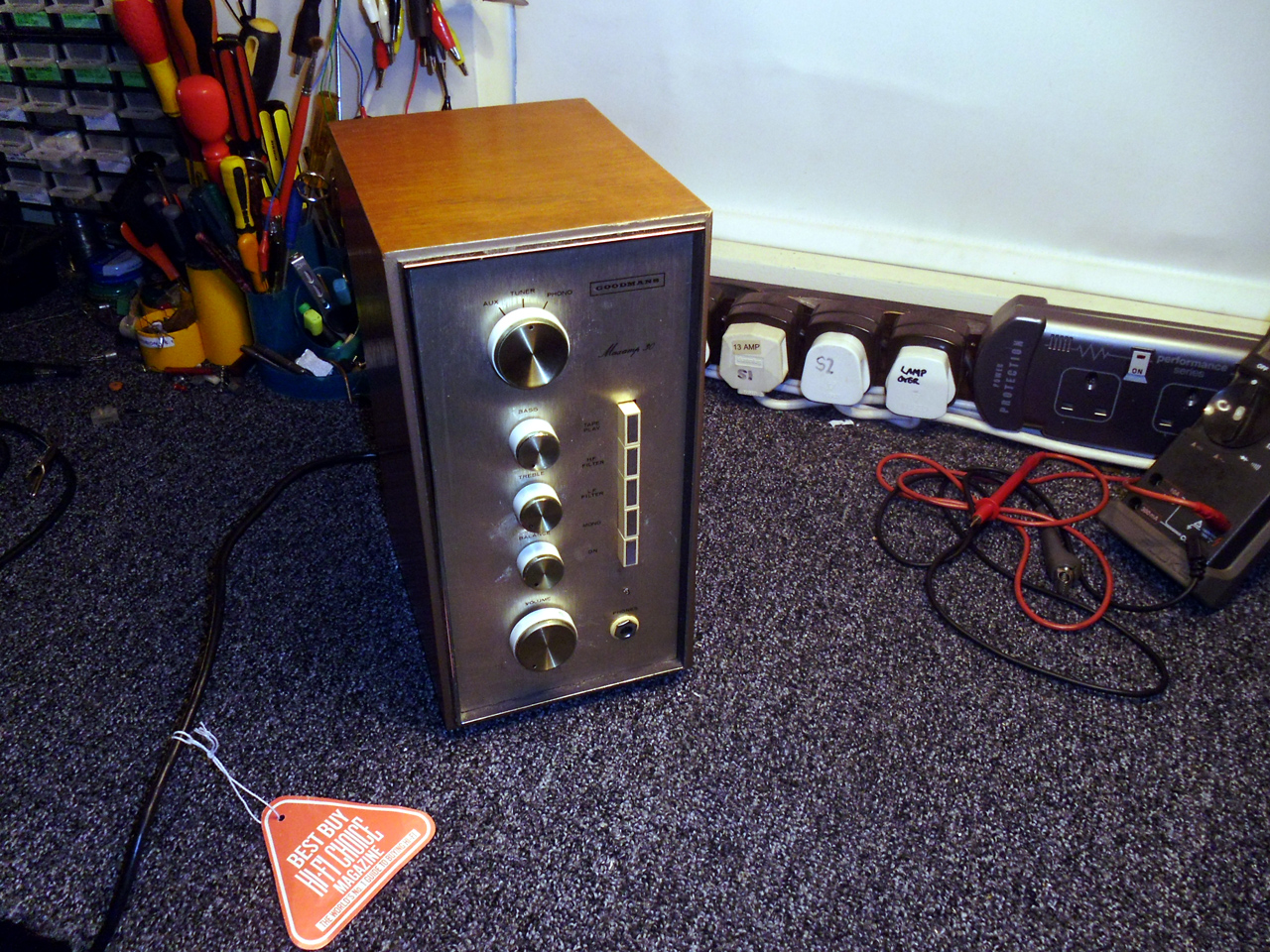 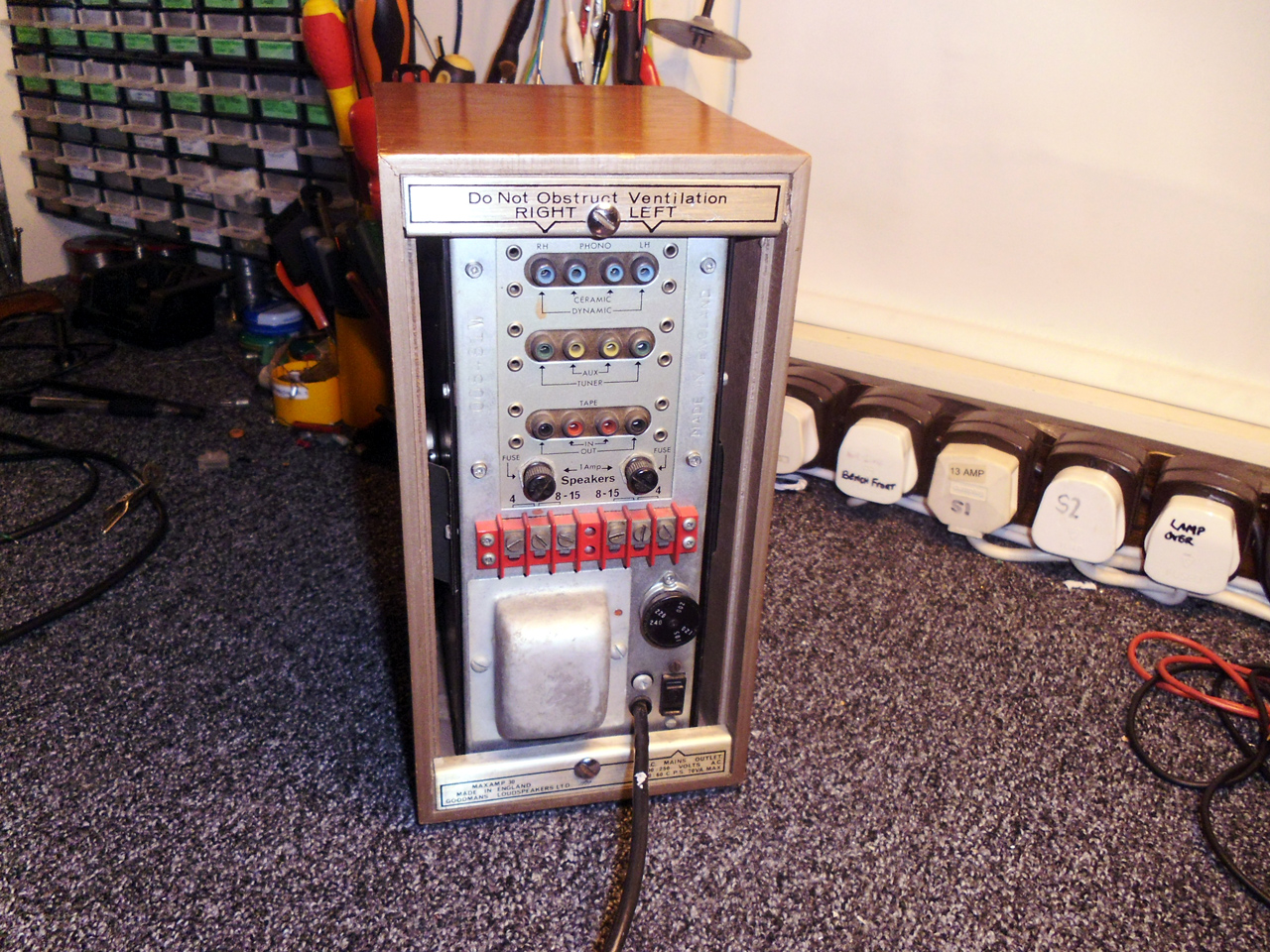 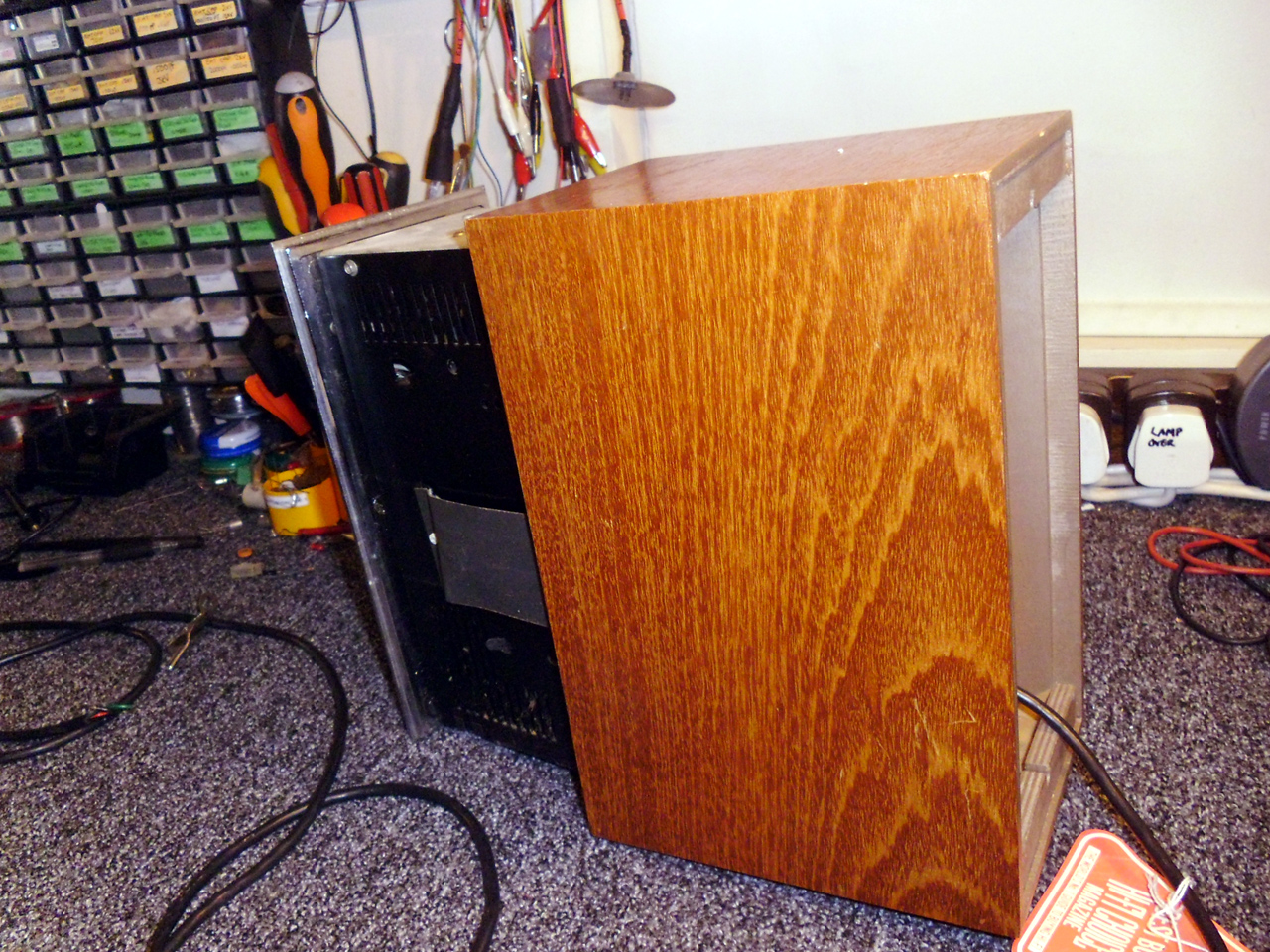 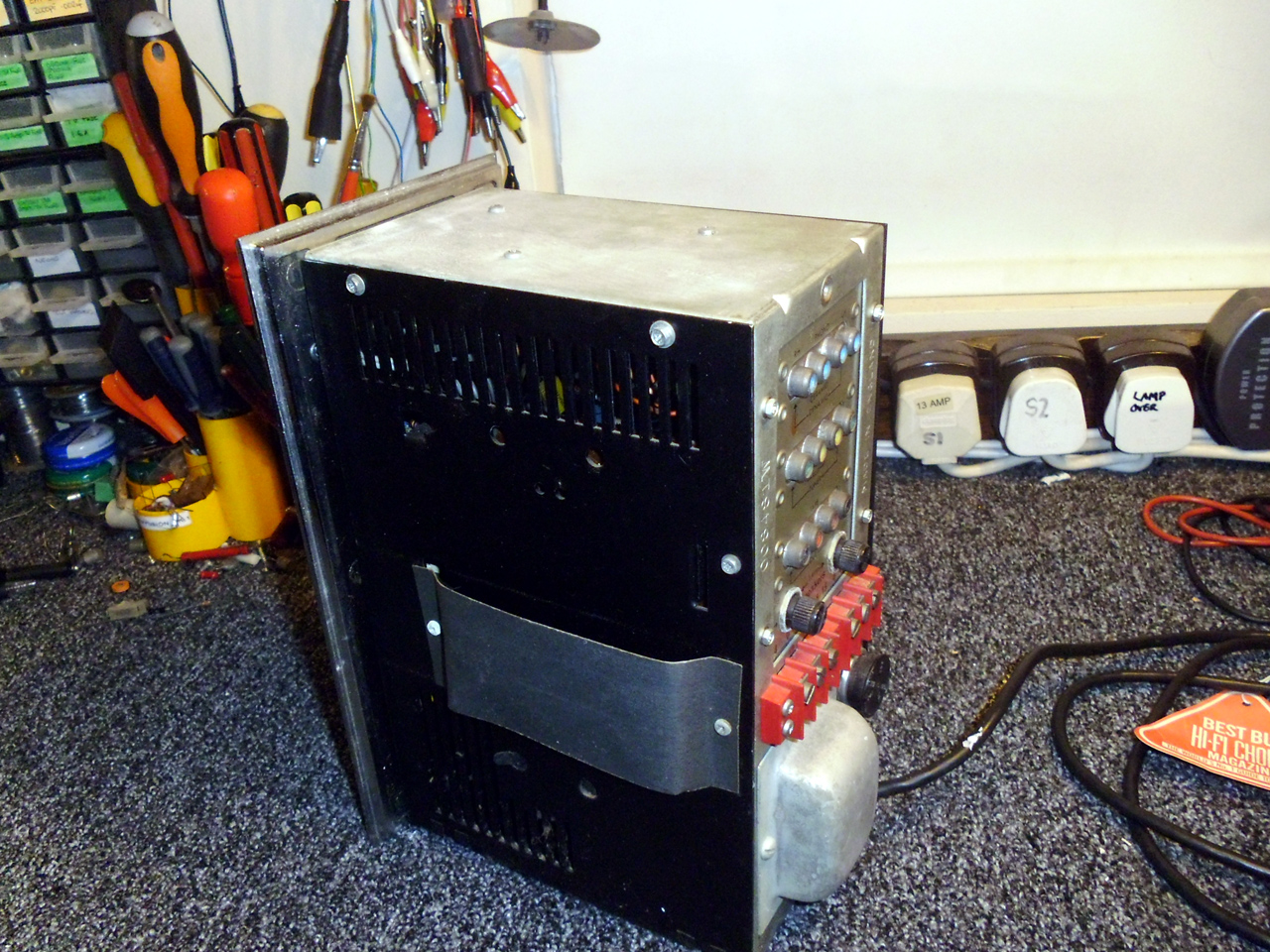 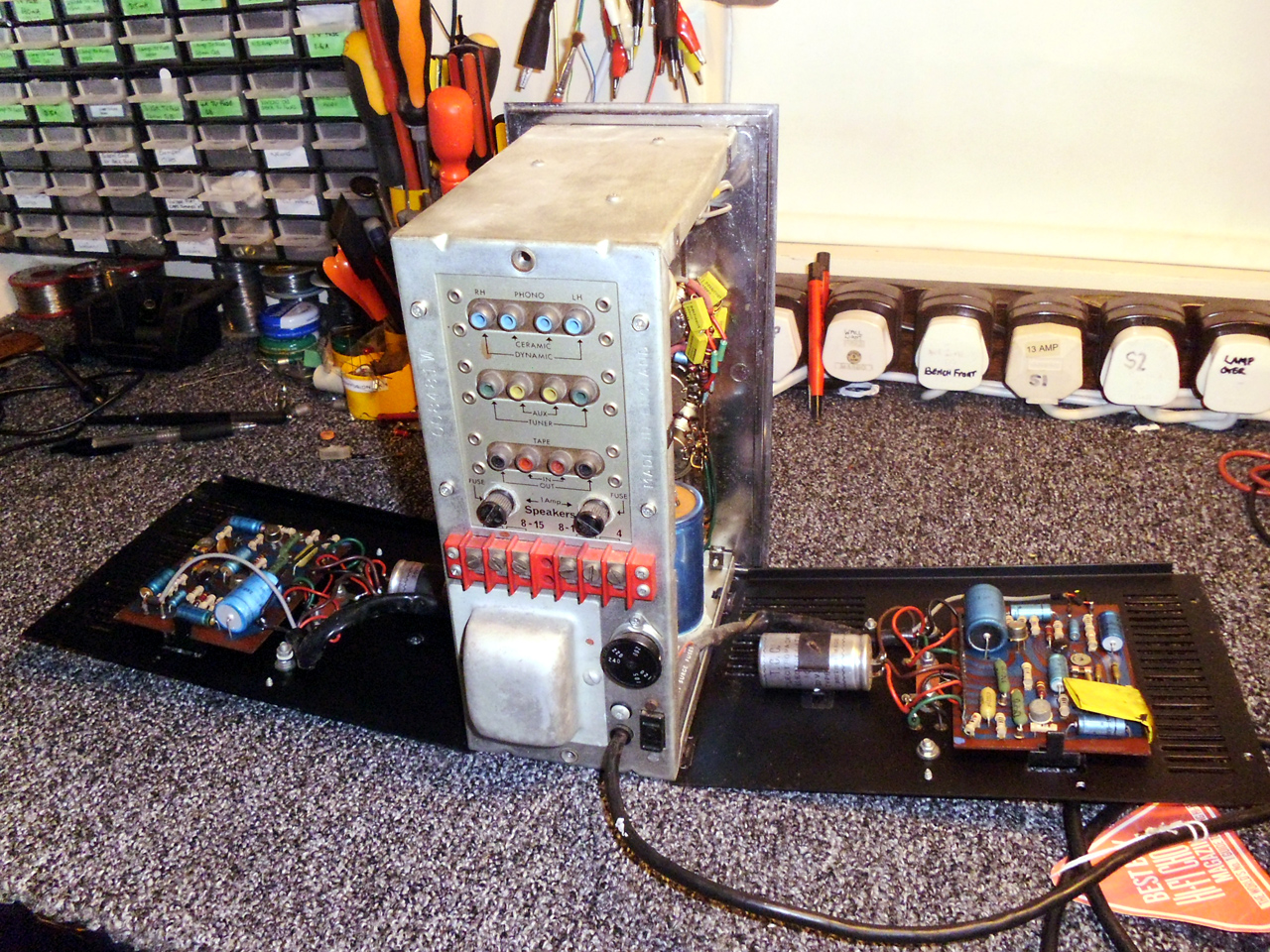 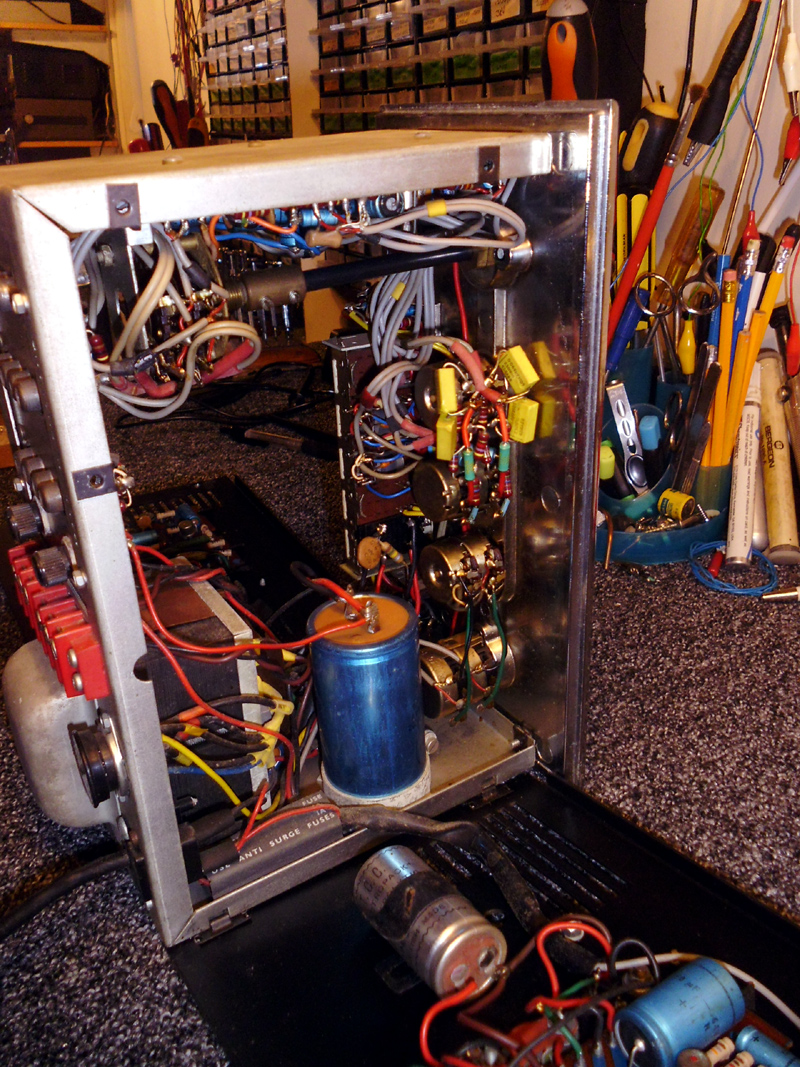 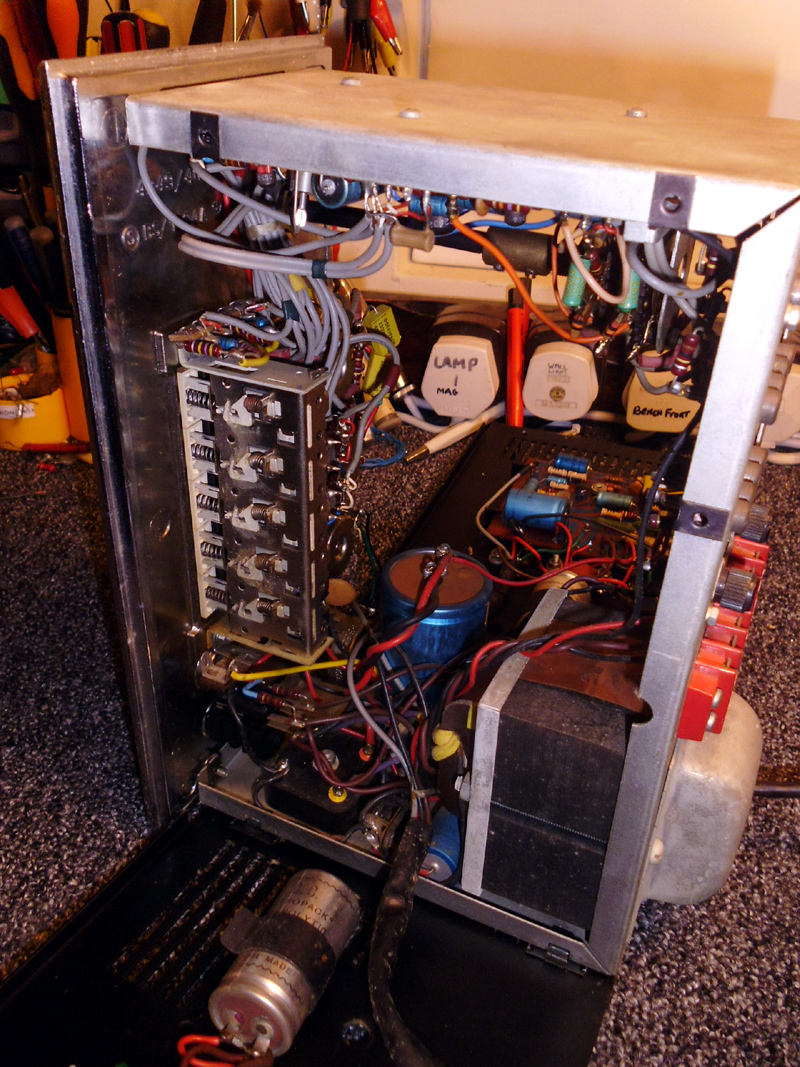 First thing I wanted to do was check and reform the main smoothing electrolytic C58 a 2500uF @ 64V. There was some evidence of venting but the cap easily reformed. The push buttons were all sticking, they would not latch/unlatch. These and all the pots were treated to a dose of “Servisol” switch cleaner. This cleared up the latching troubles. 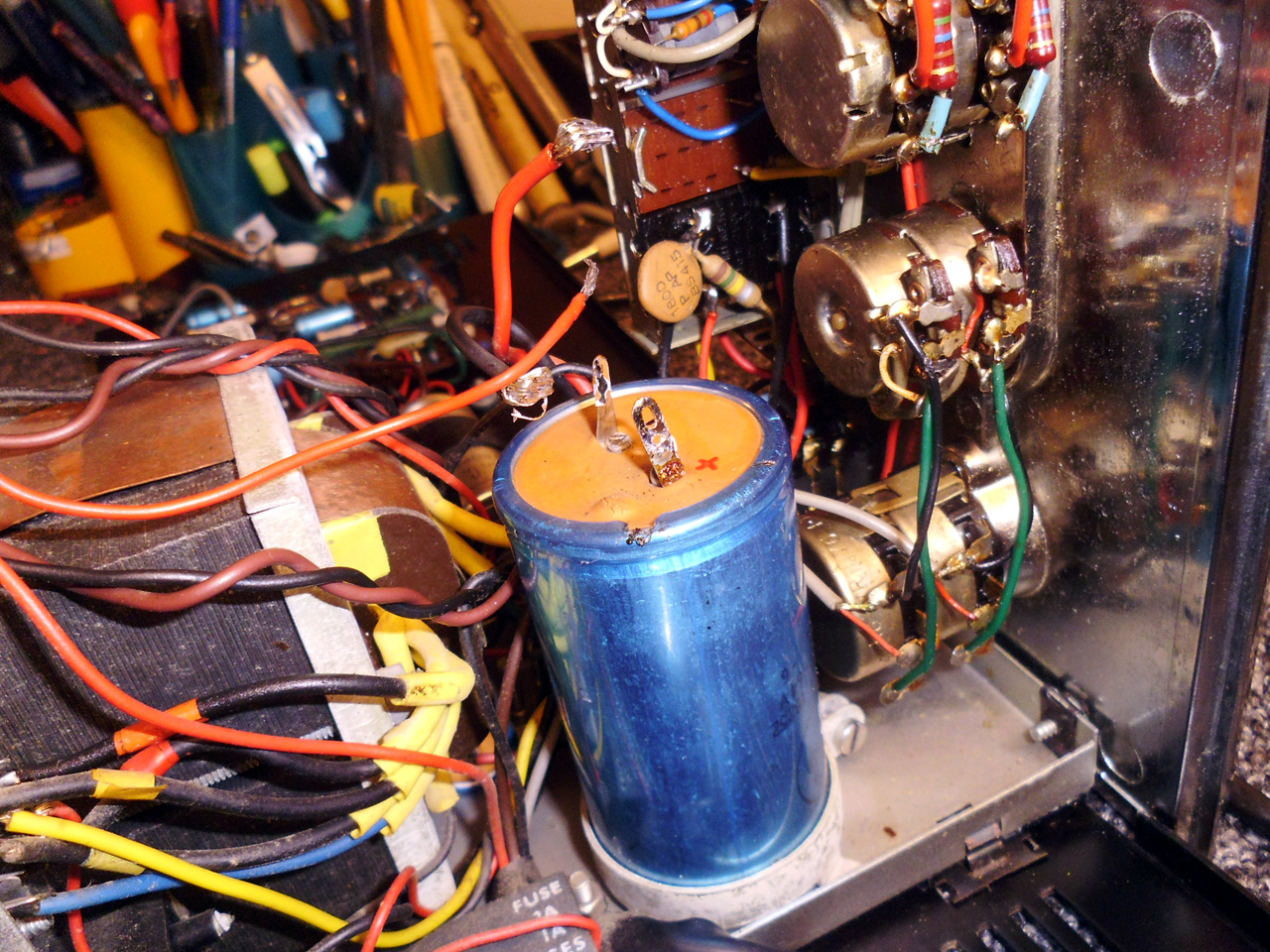 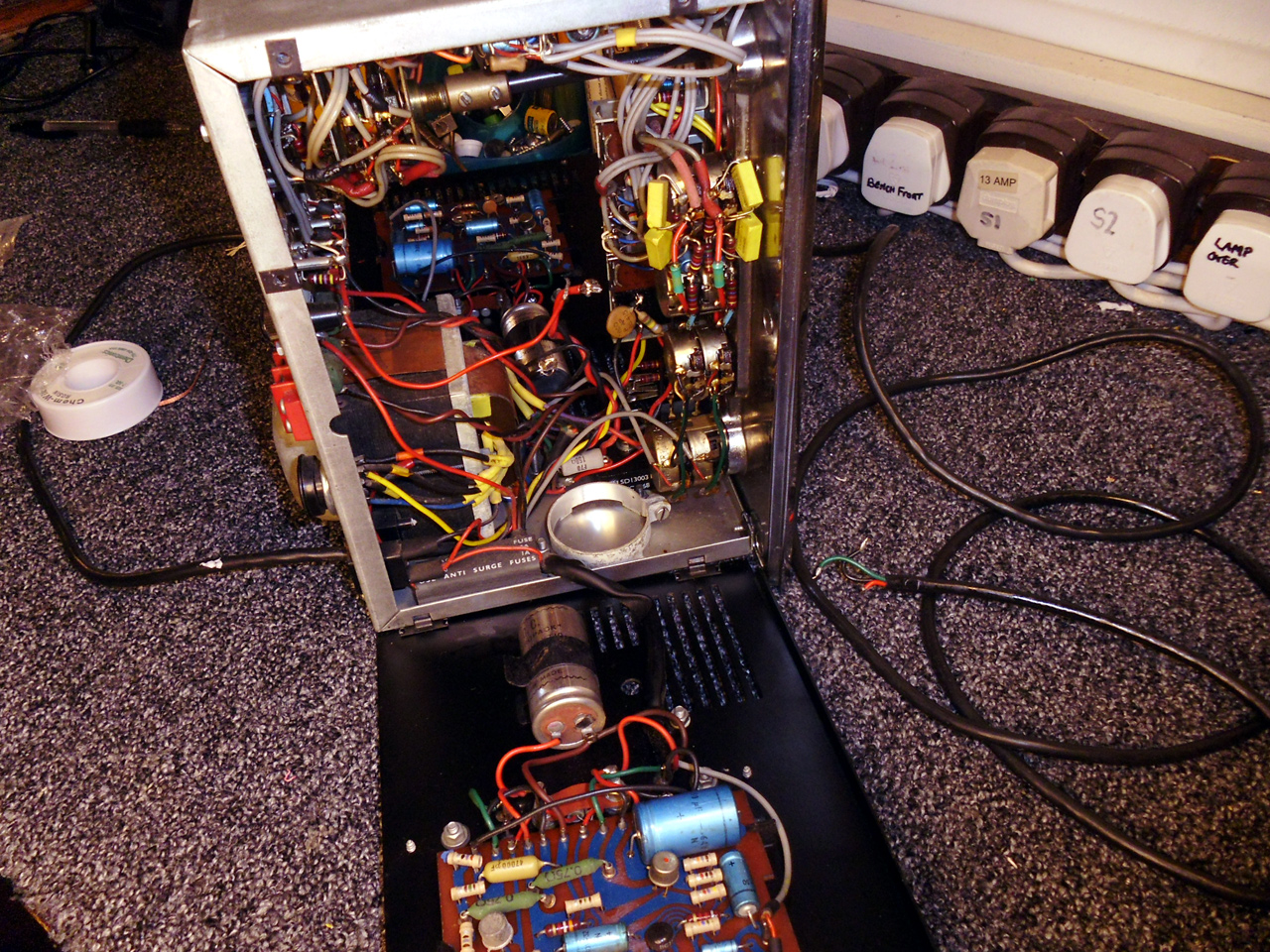 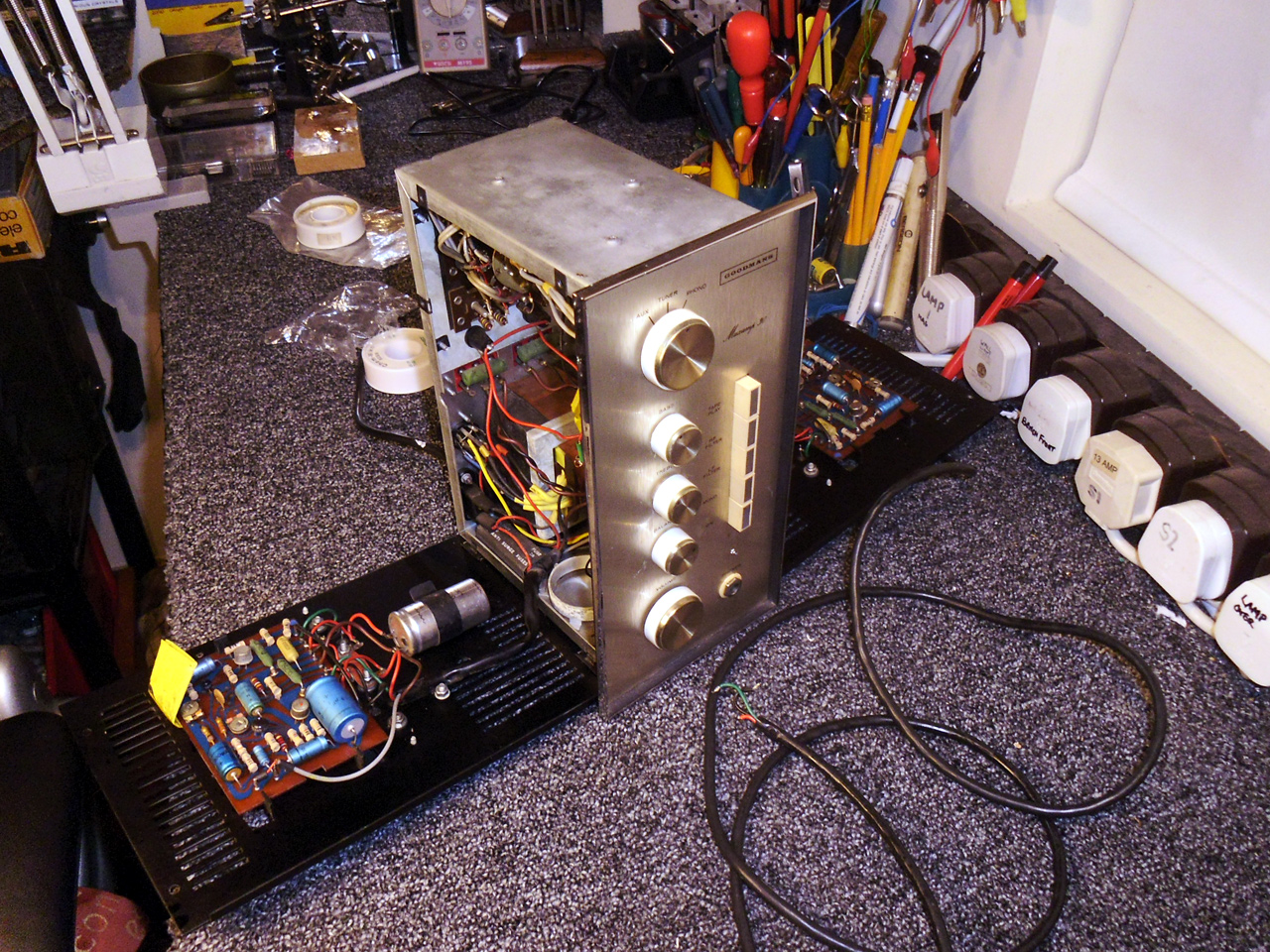 C58 on the reformer, as can be seen below some leakage (neon struck) but the voltage was steadily climbing and the cap was cool to the touch. 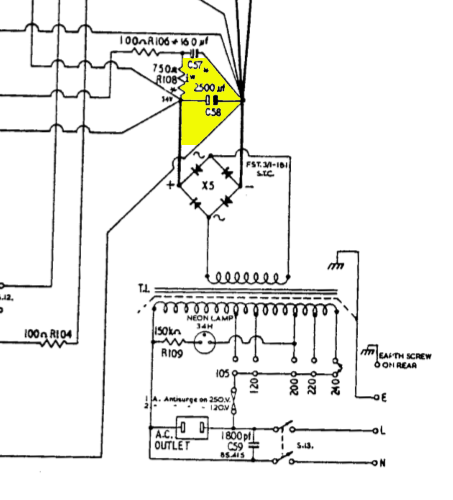 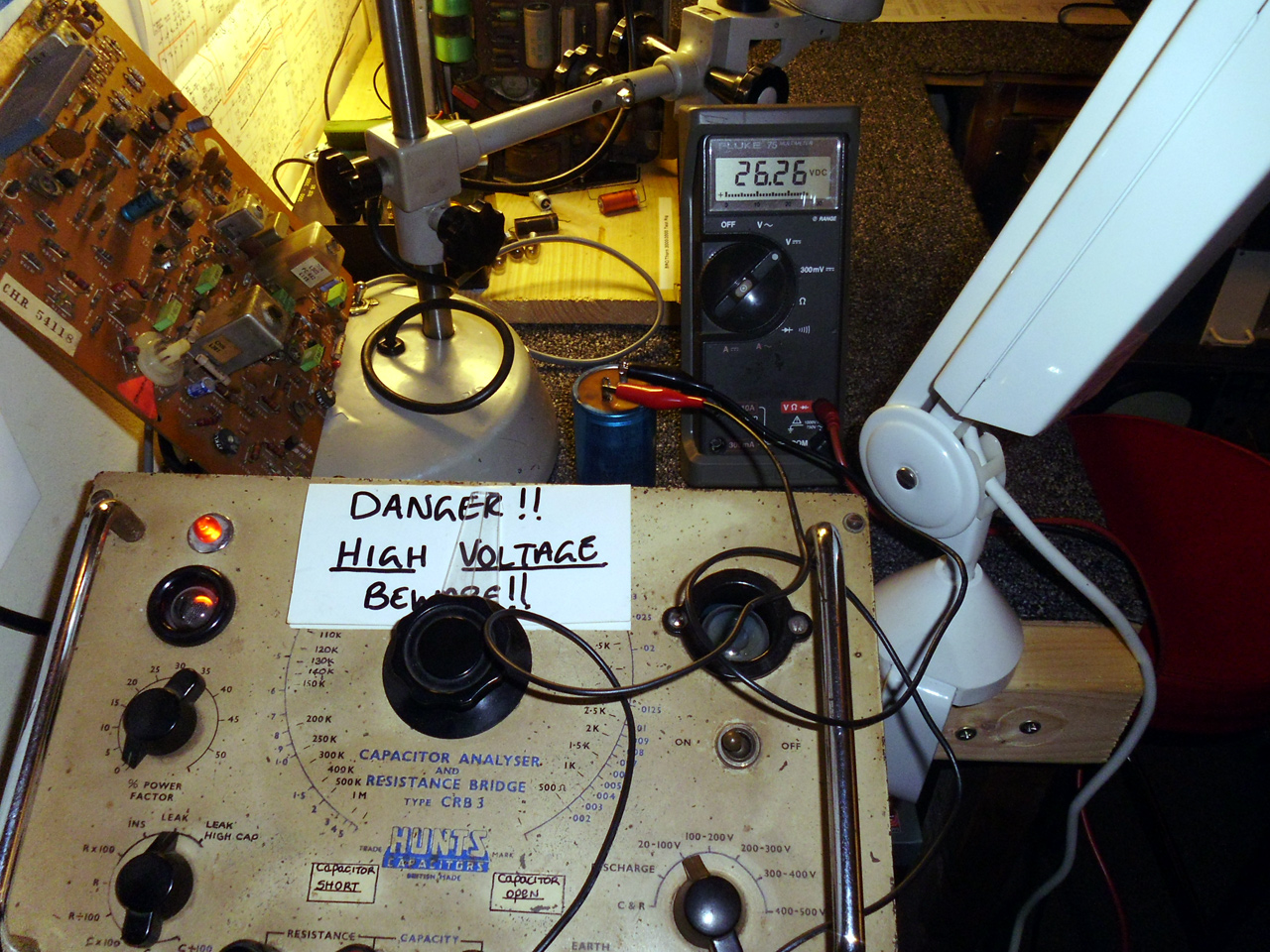 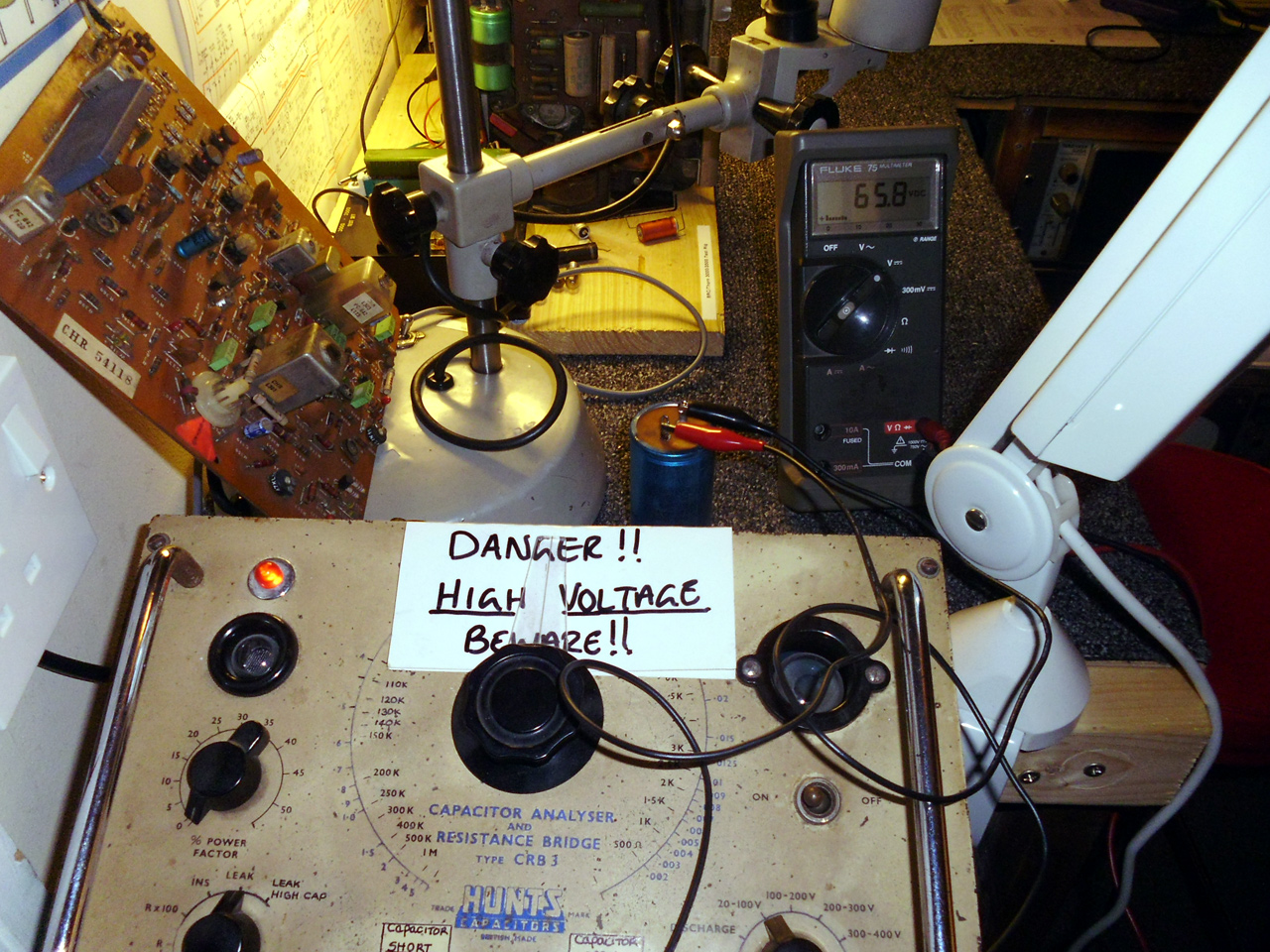 The amp was then test powered up and connected to a signal source and performed admirably. 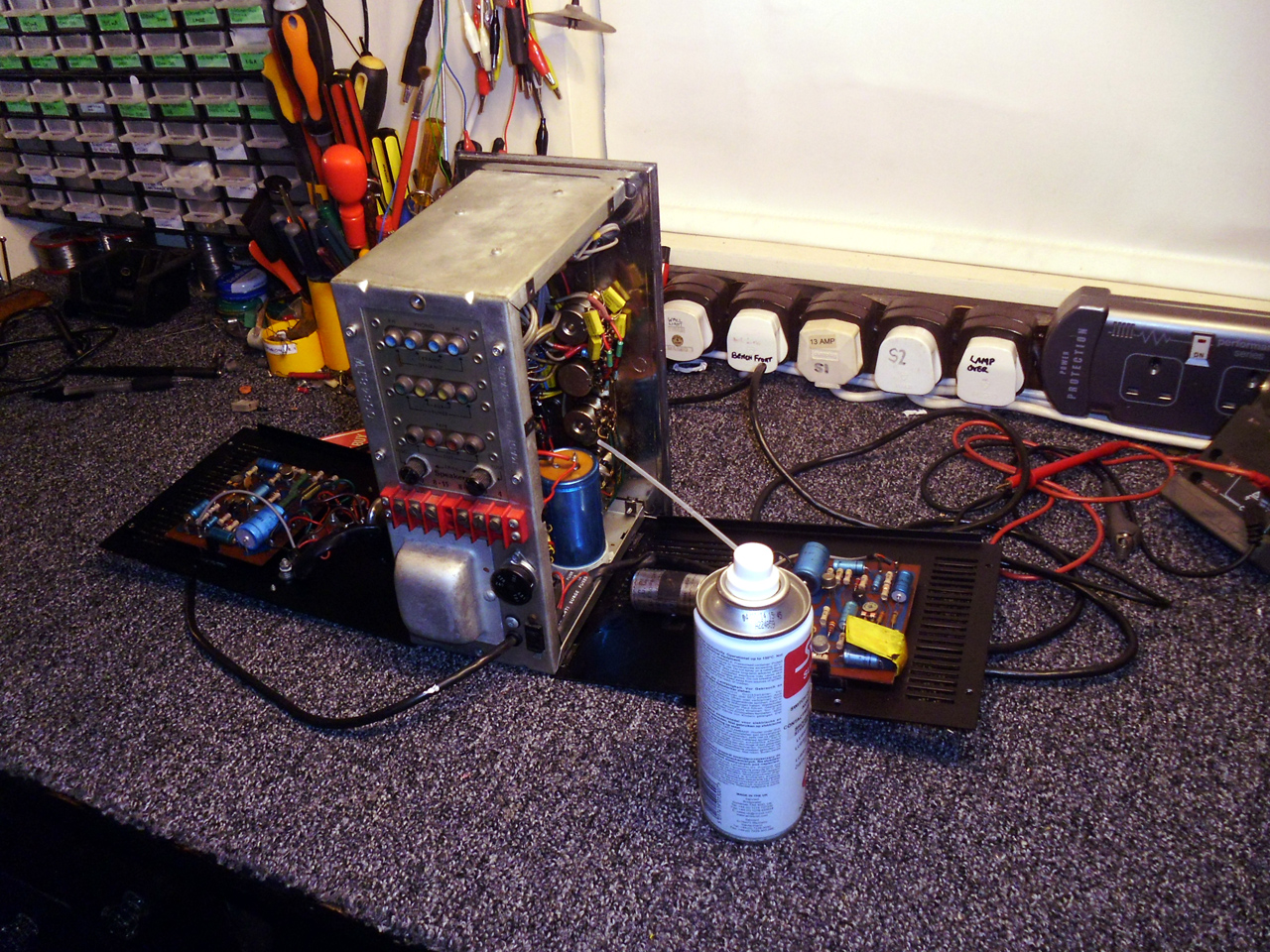 Next instalment the StereoMax Tuner. 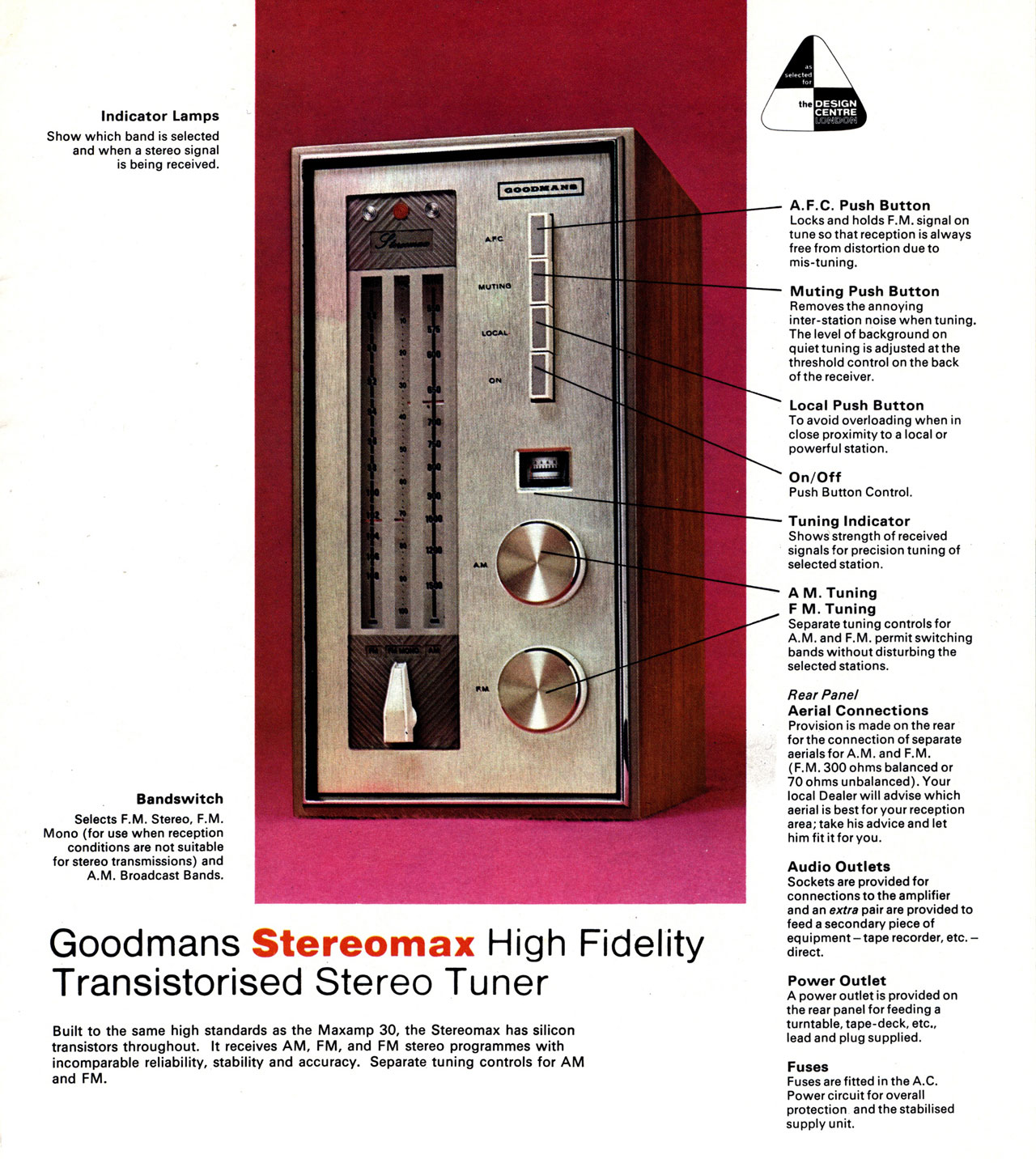 There’s noting much wrong with the tuner except for three things, the wave selector knob is missing, I’ve ordered a similar replacement from e-bay. The second fault is the dial cord for FM is broken, it cannot be repaired. I did have some NOS dial cord in stock but its way too thick. Therefore I’m stuck until I can find something thin and suitable. Finally sticky switch latching, this was again cured with some application of Servisol.

I tested the tuner, it works on A.M. and I manually rotated the FM gang to select stations, FM works just fine as well. 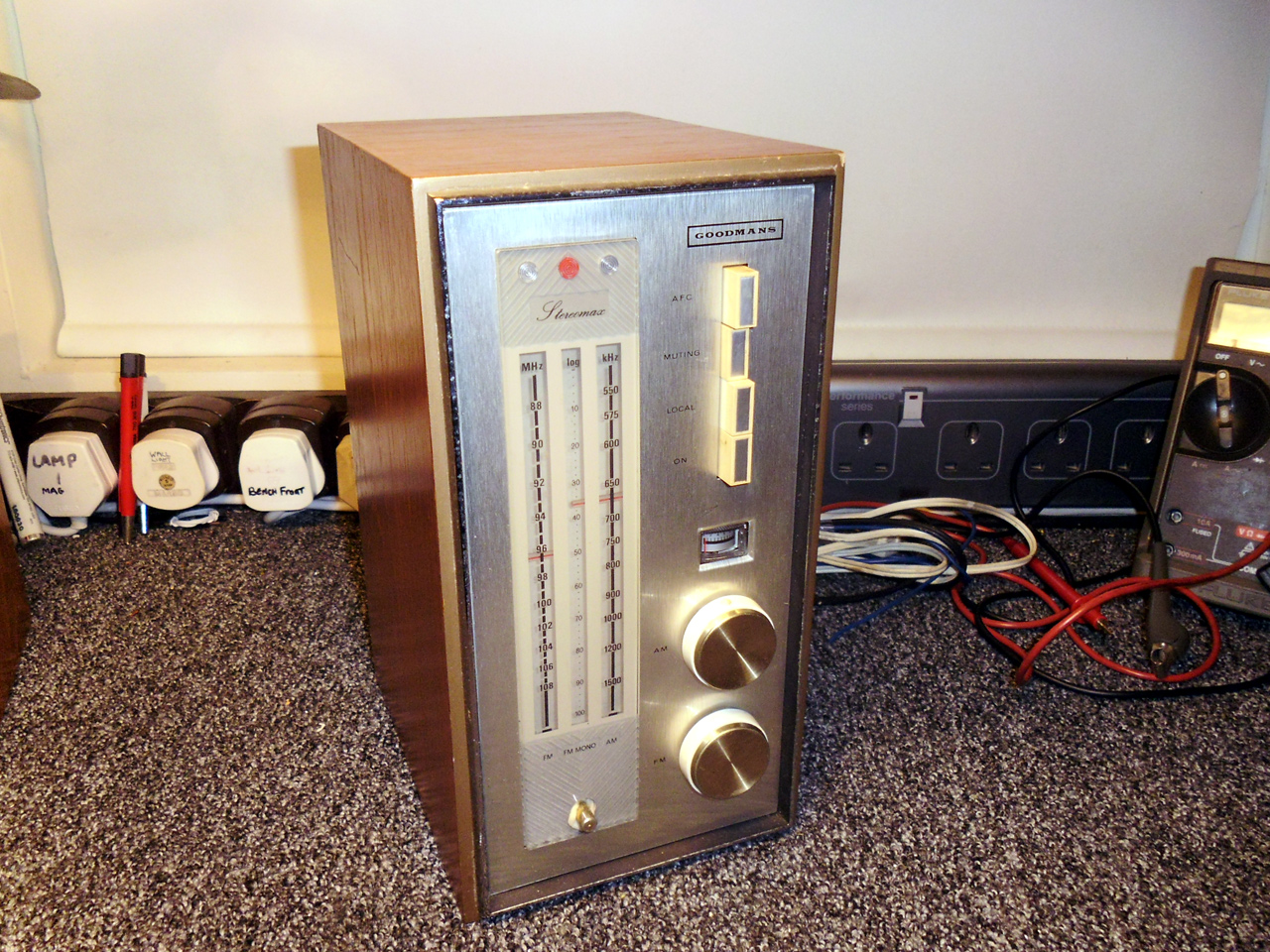 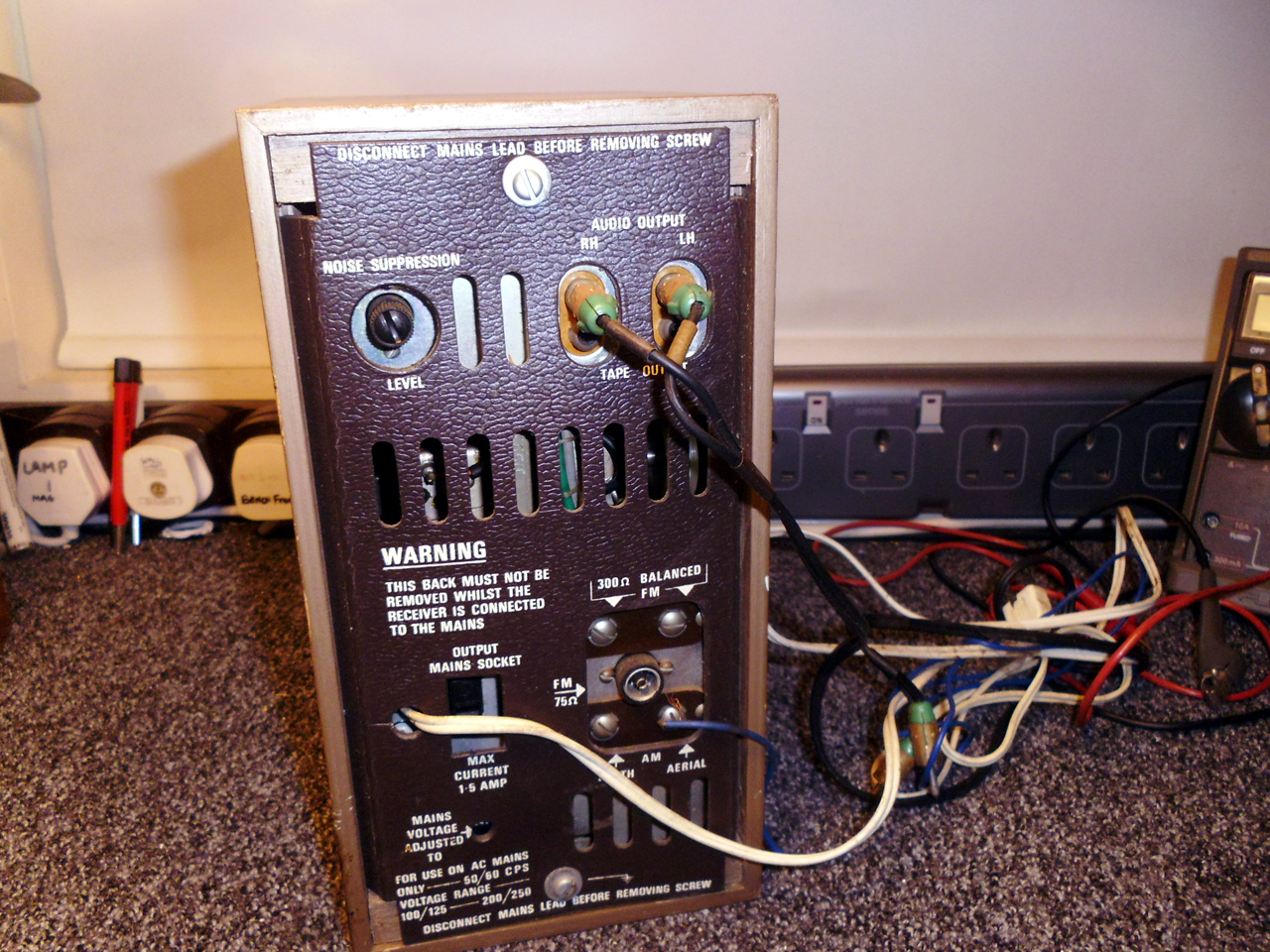 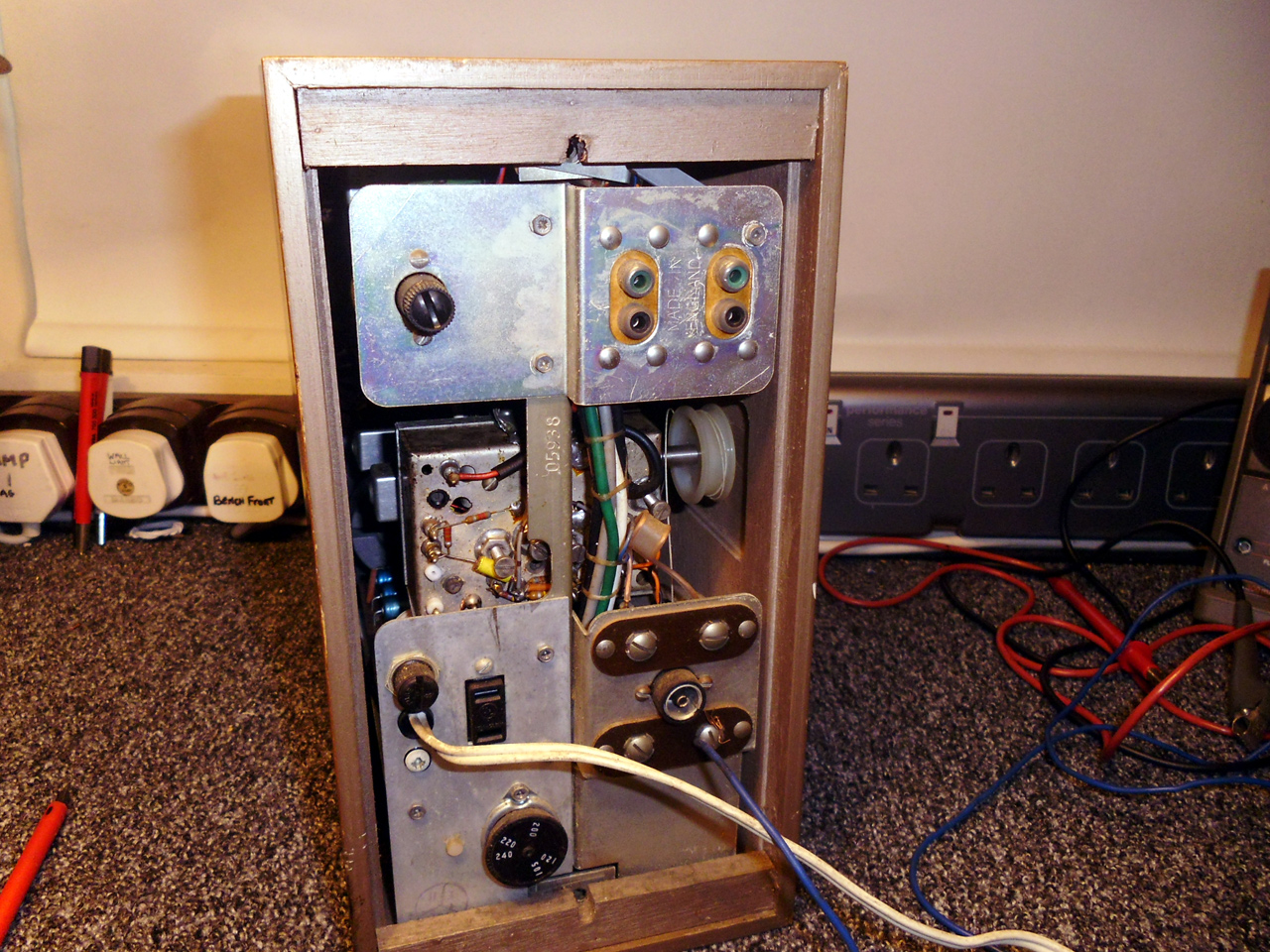 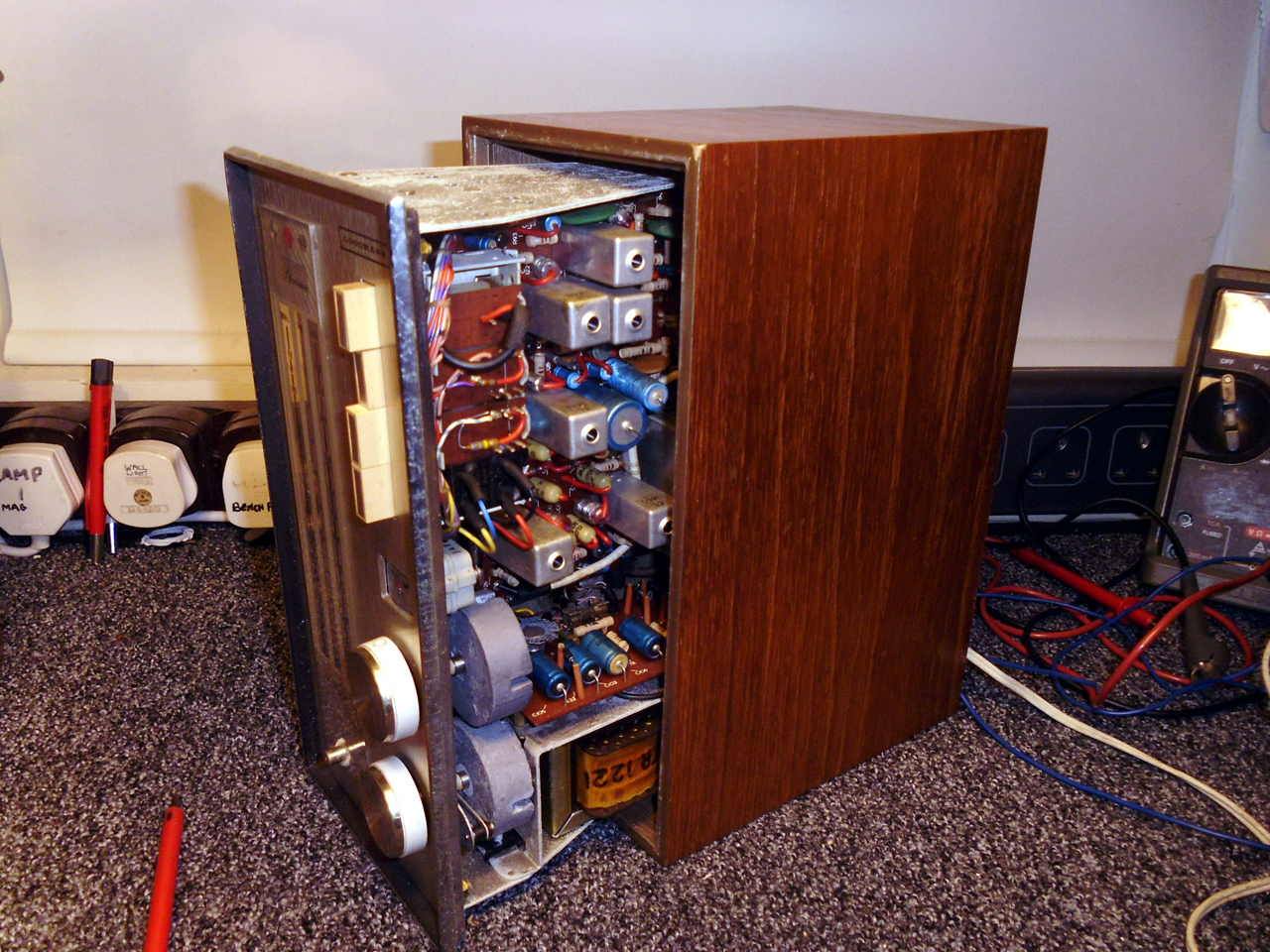 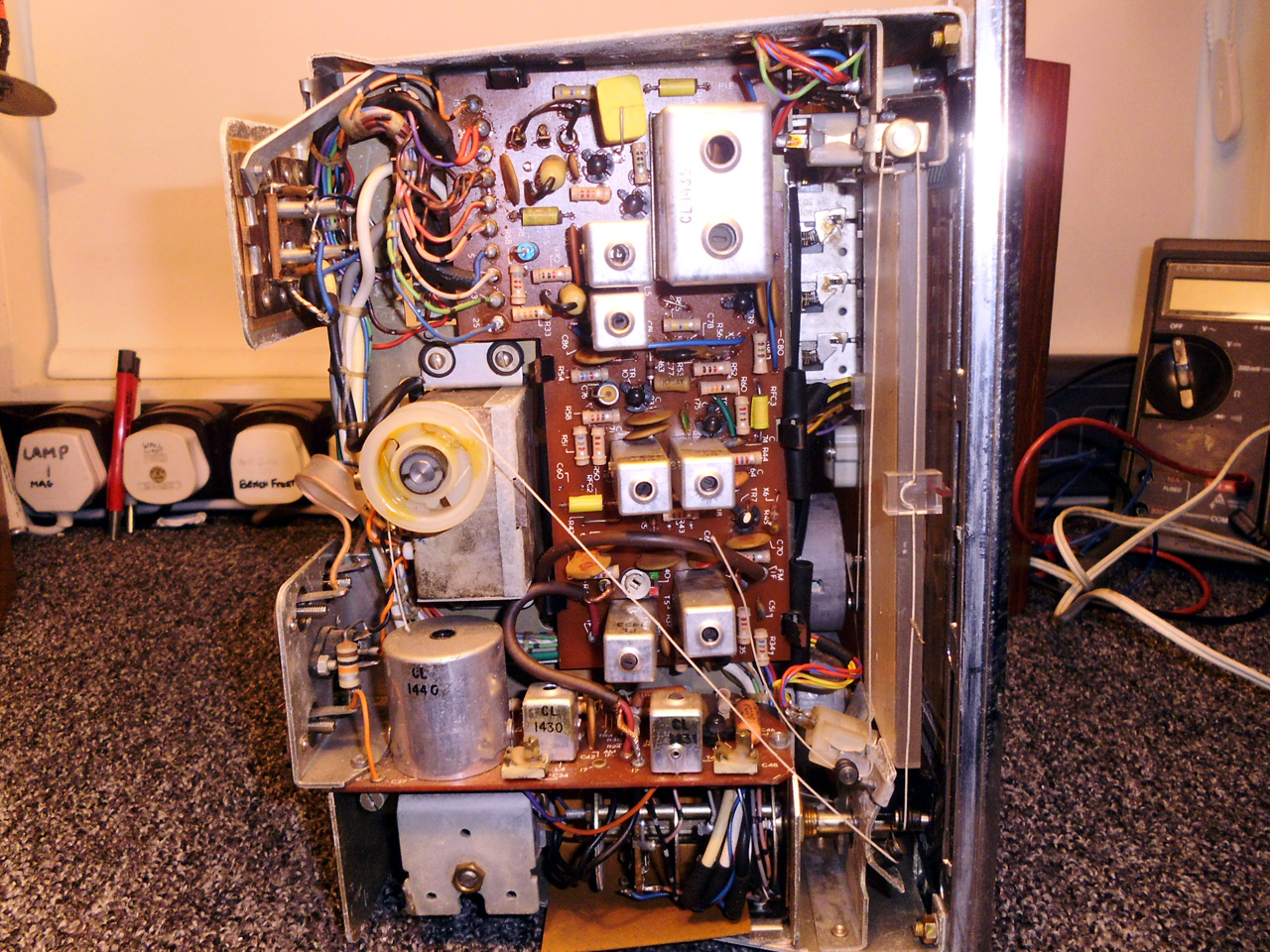 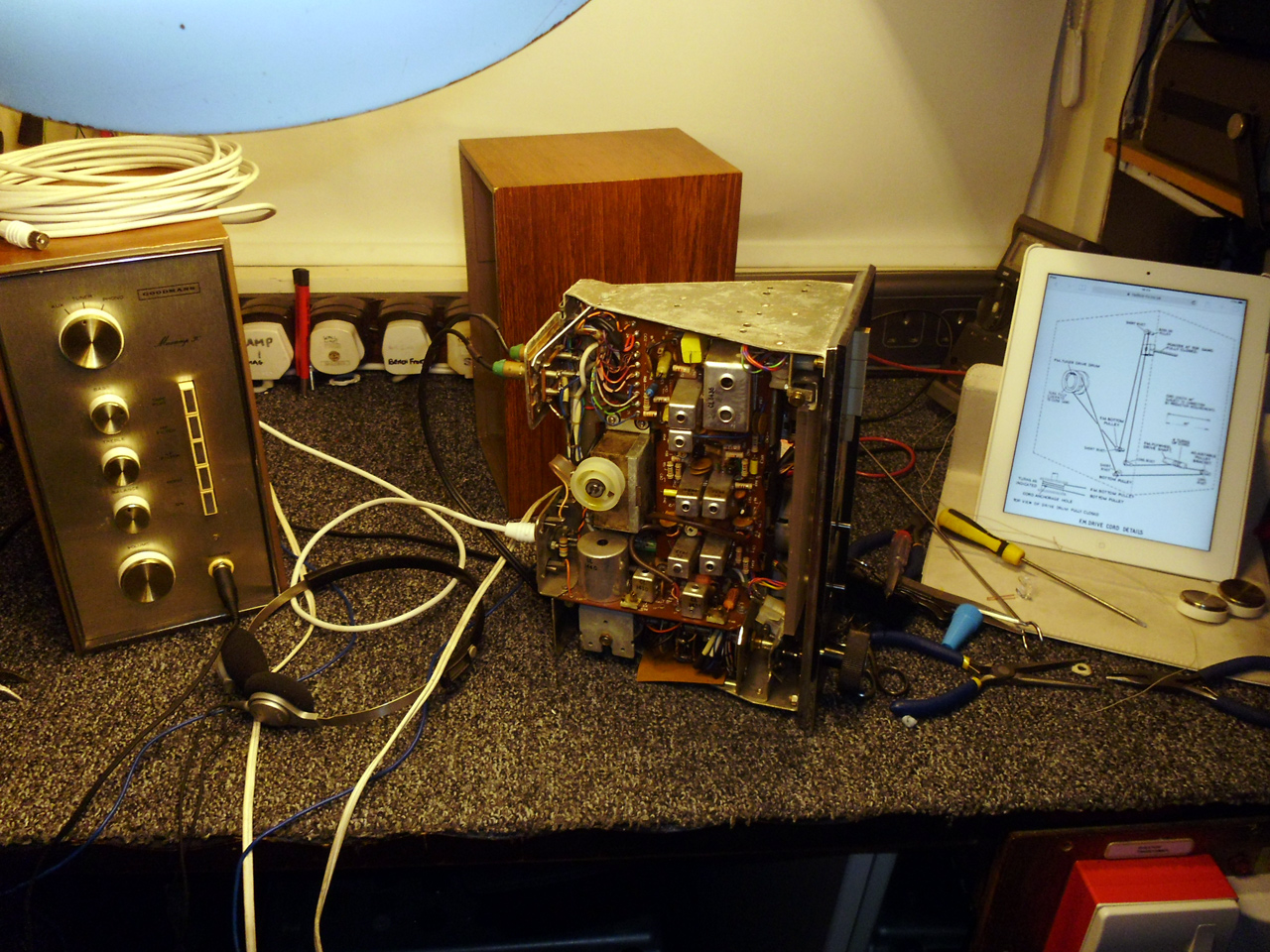 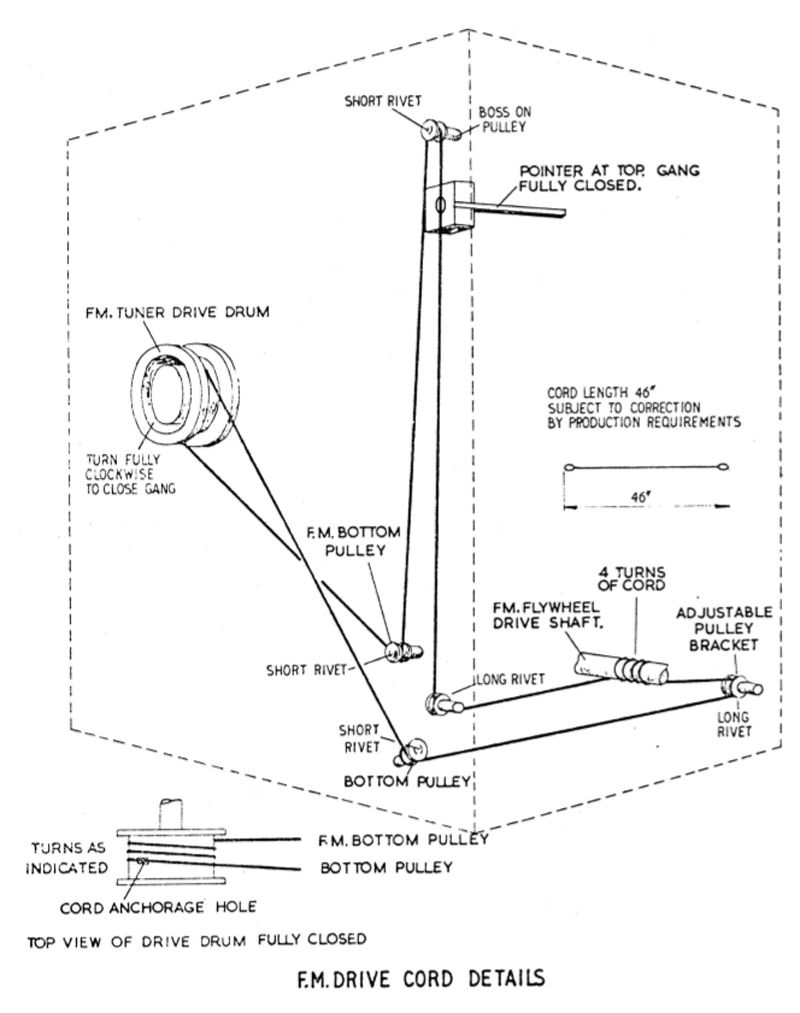 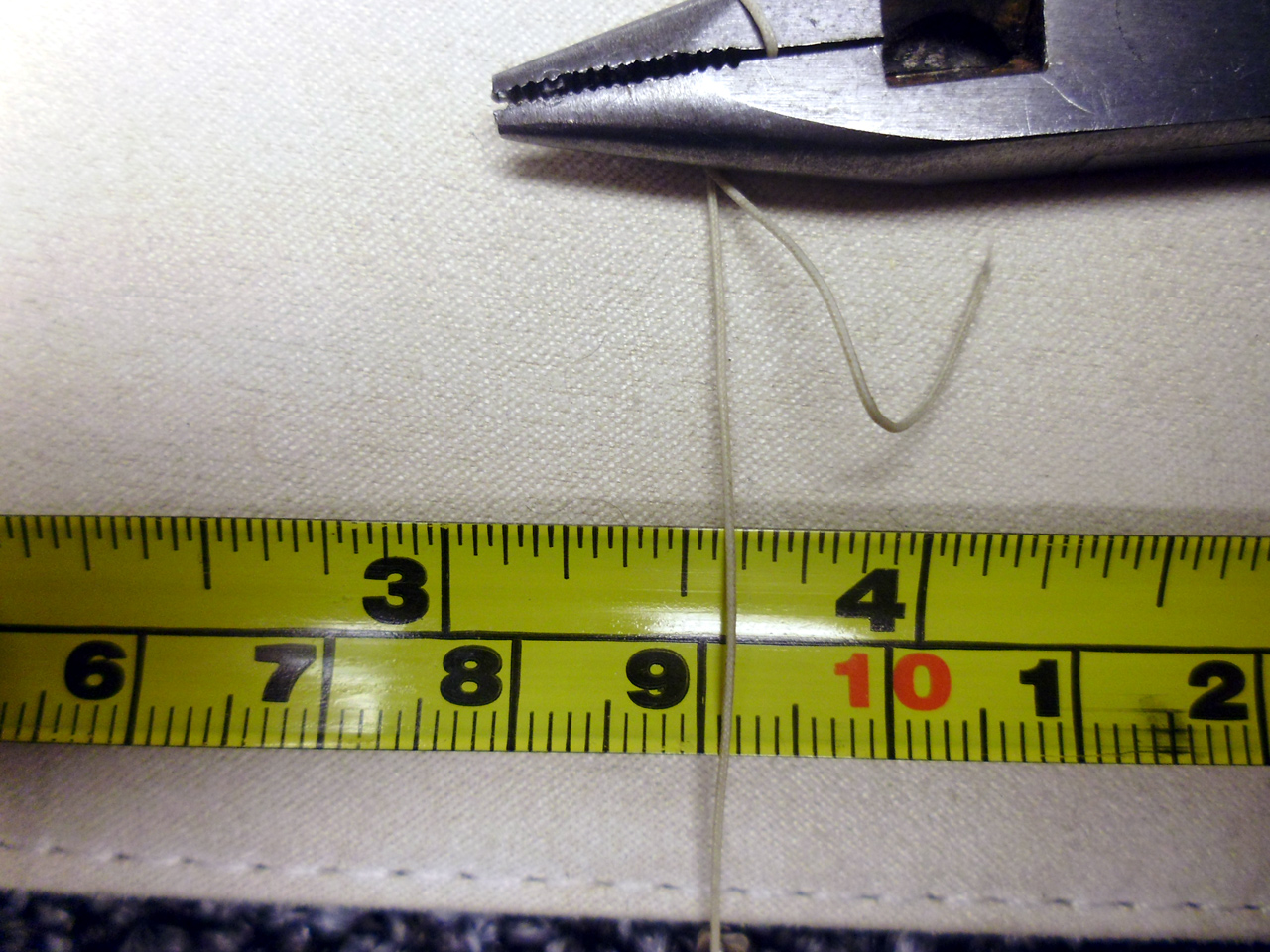 With special thanks to member “Cathovisor” (Mike) who supplied me with the correct dial cord, I was able to restring the tuner. The replacement wave selection knob is fitted and although not like the original, its the best I can do as I’m unlikely to find the unique original knob unless someone can 3D print one for me. 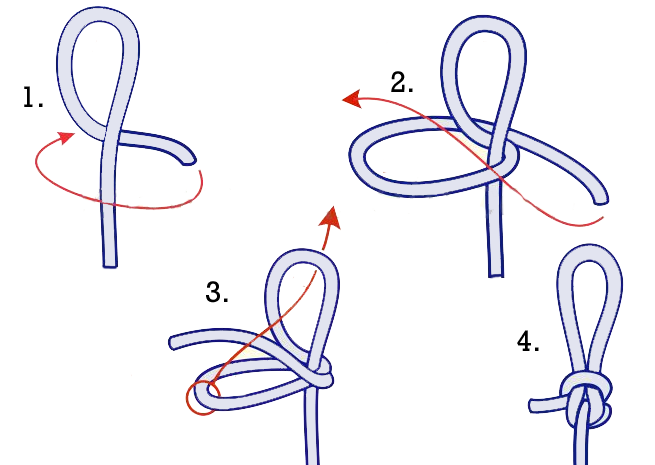 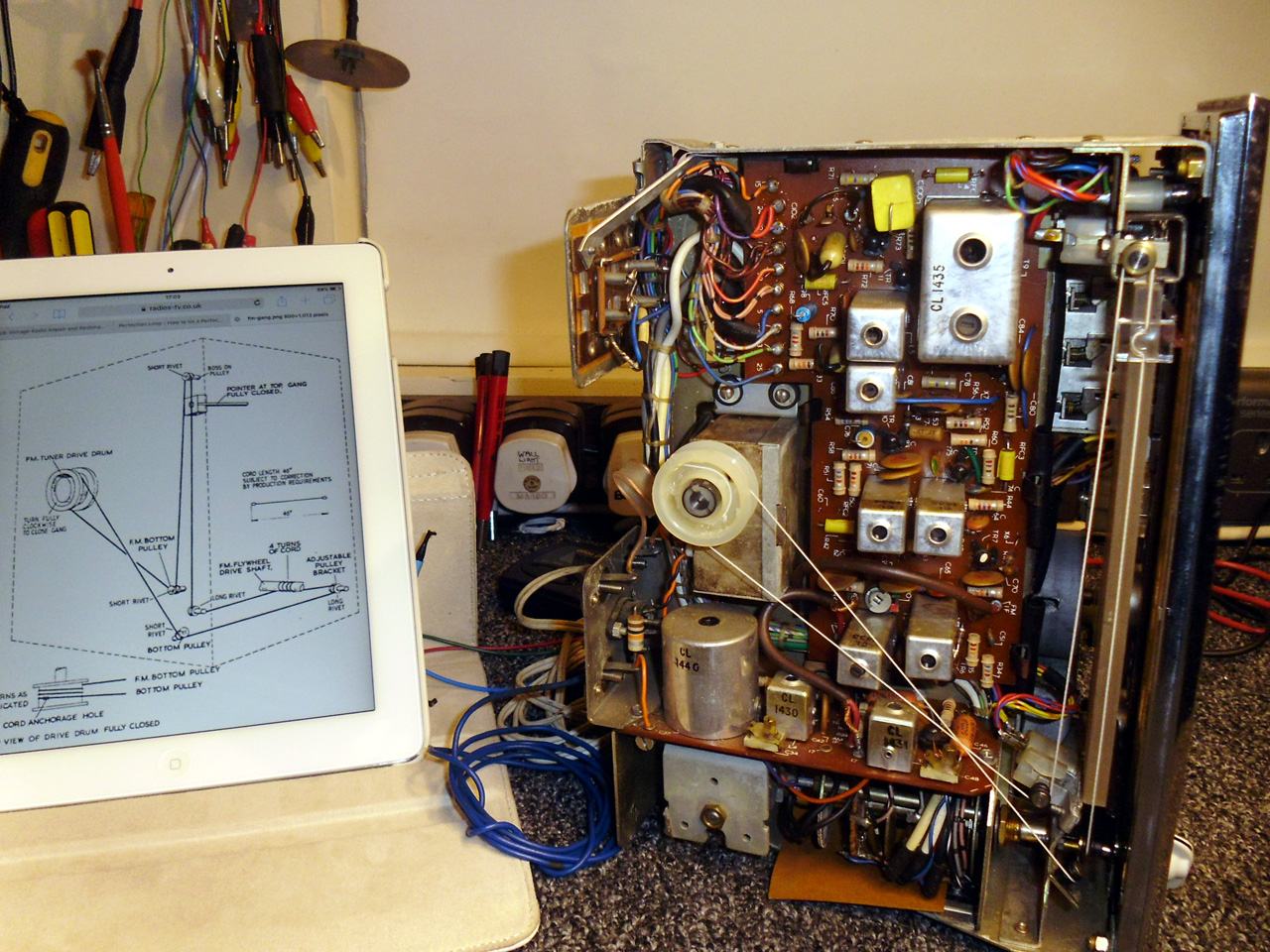 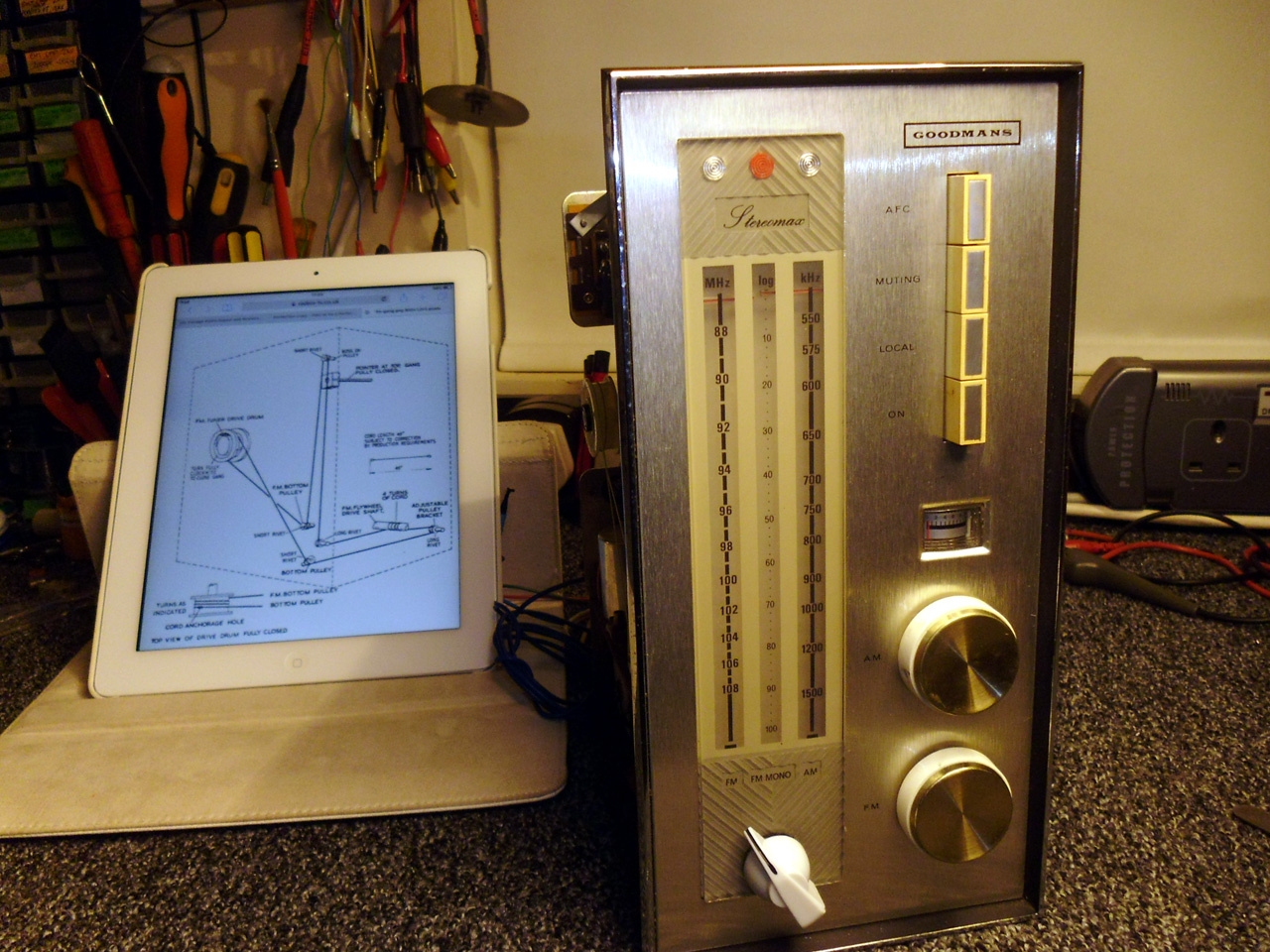 Next? Rather than using headphones test it with the Grundig speakers.

Whilst on the subject of speakers, the original bookshelf ones that would have been supplied with the system were Goodmans “Maxim”, see  below. 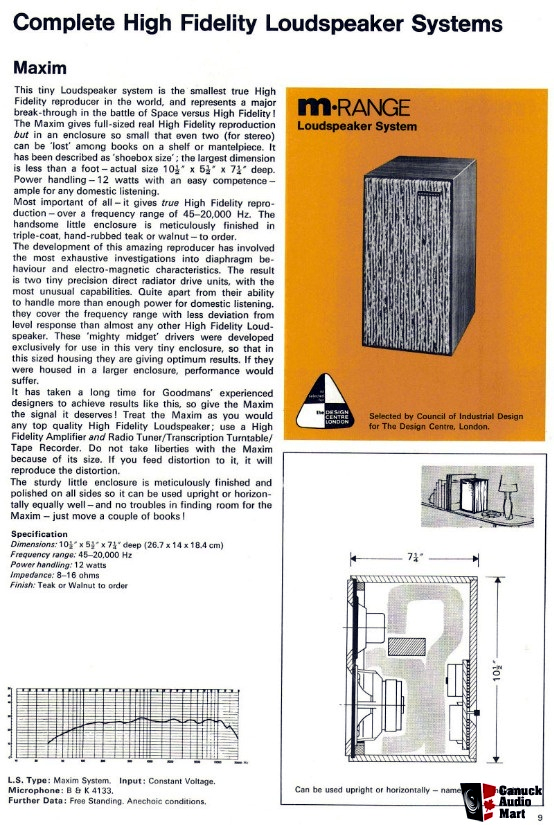 Some period-appropriate KEFs or B&Ws would go very nicely with that combination. Or a pair of Celestion Dittons…

A very nice combo….the kind of build quality and layout that makes sense and makes you feel at home.

That’s a really nice classic duo there- and there was me thinking that the amp was busy inside! The tuner certainly packs it in- it strikes me that both must have been quite labour-intensive to make with lots of constructional detailing, PCB modules and inter-wiring. I was really glad that an opportunity came up to pass that little amp to someone who’s evidently appreciative and enthusiastic about kit from this era. It’s such a shame that makers of sound, sturdy, honest-to-goodness British electronics like Goodmans and Bush ended up as flogged-off-badges on plasticky, short-lived awful Far East stuff, turning such names into by-words of derision for a younger generation. At least some of the halcyon days stuff lives on to correct the impression.

Glad to hear that the amp’s in fine fettle, and the tuner’s well on the way to recovery.

Now I’ve never had anything to do with Goodmans products until Comet began using the name on TVs but some things seemed familiar to me in the pictures,  particularly the look and construction of the pcbs in the tuner and numbers stamped on the mains transformer/coils. A quick Google revealed this, note 1968.  https://www.gracesguide.co.uk/Radio_RentalsJohn.

I guess it depends upon how well you rate Wharfedale speakers, but if your brochure picture is anything to go by, a pair of Linton or Super Linton wouldn’t look out of place. A more compact speaker would be the Shelton or Denton. Obviously, a lot depends upon the output power of the amp.

The noise suppression pot on the back panel, is this to set the sensitivity of the inter station muting on FM or some pulse suppression adjustment for pulse noise limiting on MW?

Posted by: Katie BushI guess it depends upon how well you rate Wharfedale speakers, but if your brochure picture is anything to go by, a pair of Linton or Super Linton wouldn’t look out of place. A more compact speaker would be the Shelton or Denton.

A reviewer of the period described Wharfedale speakers as sounding ‘anything but neutral’ but also that in fairness, they probably wouldn’t be as popular if they did.

When the Japanese manufacturers started making some very good music centres in the middle late 70’s it was the speakers that let them down.Connect a pair of UK made speakers to them and the difference was really noticeable. They didn’t need to be the large ones either, the small book shelf type would do the job.Not that we sold many UK speakers with those music centres but it did occasionally occur.

Have to say, I always thought the best place for Wharfedale speakers was chucked in the River Wharfe; they always sounded utter crap to my ears!

Posted by: CathovisorHave to say, I always thought the best place for Wharfedale speakers was chucked in the River Wharfe; they always sounded utter crap to my ears!

Ooh, ouch…. Mike, yer a hard man to please!Of course, you can gut them and put in your own drivers and crossovers! In any case, my humble Wharfedales definitely sound a thousand tons better than the Technics branded speakers that came with my Technics Hi-Fi stack.That said, some of us have yet to feel the silken thread – some of us probably never will, but in any case, jute is way better than sisal?

That’s the trouble, Marion – although I don’t have ‘golden ears’, I do have very good hearing (about the only bit of me that isn’t knackered is me lugholes!) and I am very sensitive to differences in sound quality – which is just as well given my job. And of course, I’m used to pretty high quality audio systems at work and it’s reflected at home now.To me, Wharfedales of the 1970s sounded a bit ‘rough’ and as the reviewer said, ‘far from neutral’. KEF were, IMO, much better in the 1970s; I’ve never heard a 1970s pair of B&W speakers to compare and sad to say, I am yet to hear a pair of the near-legendary Celestion Dittons – apparently the monster Ditton 66s are something else, but in their day and for their size, the Ditton 15s were the “go-to” speaker. Another nice speaker – but again, big! – were the Spendor BC3s.