Here is a brochure photo showing the CU2213, followed by the actual set in my collection. 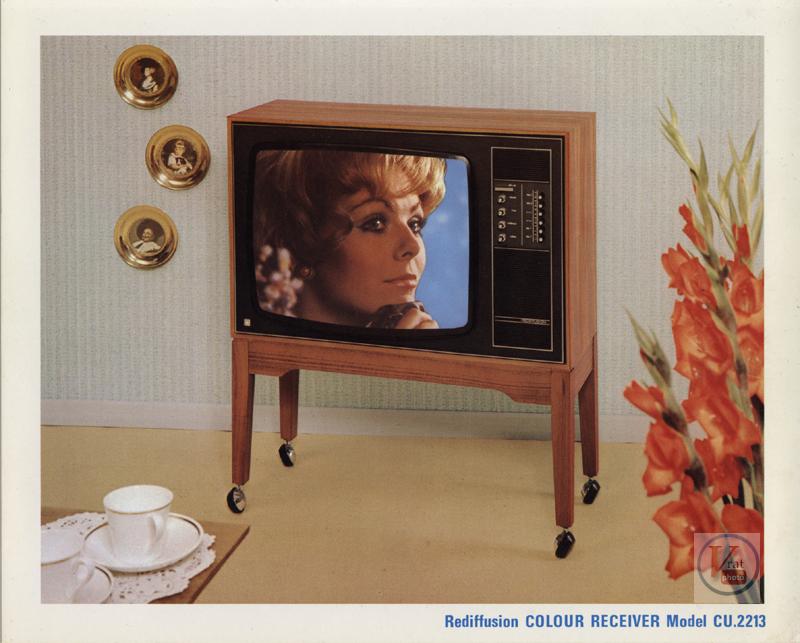 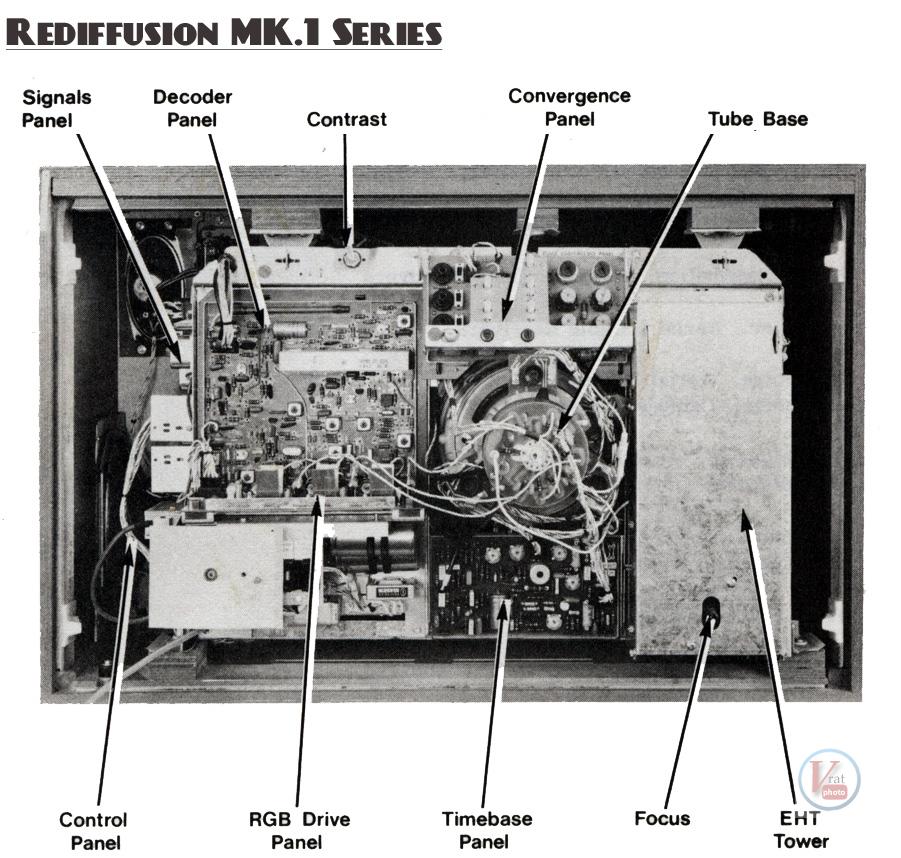 The Rediffusion has an EHT tower in this set, there’s NO dangerous shunt stabiliser employed though just two Valves, a PL509 for line output, PY500 efficiency diode, the LOPT, LOPT PCB and the tripler. Seems a good way to trap a load of heat so perhaps that was their reasoning, then again maybe it was shielding interference out from the rest of the circuit.

Below is a picture showing what you will find in the tower.

Well its arrived, spent a very nice day with Gary ( 405 Fan ) travelling down to Manchester to pick it up from Mike ( Mike66). Had a super chat about all things TV and got to look around Mikes very nice vintage collection and his workshop.

The set is very tidy and the water stains on the top and general cabinet scuffs were easily dealt with, in about 30mins it was looking much better for it. I’ve only had a scant  look Inside, its very clean and seems to be untouched, I will give it a thorough inspection over the coming days to evaluate the state of play. 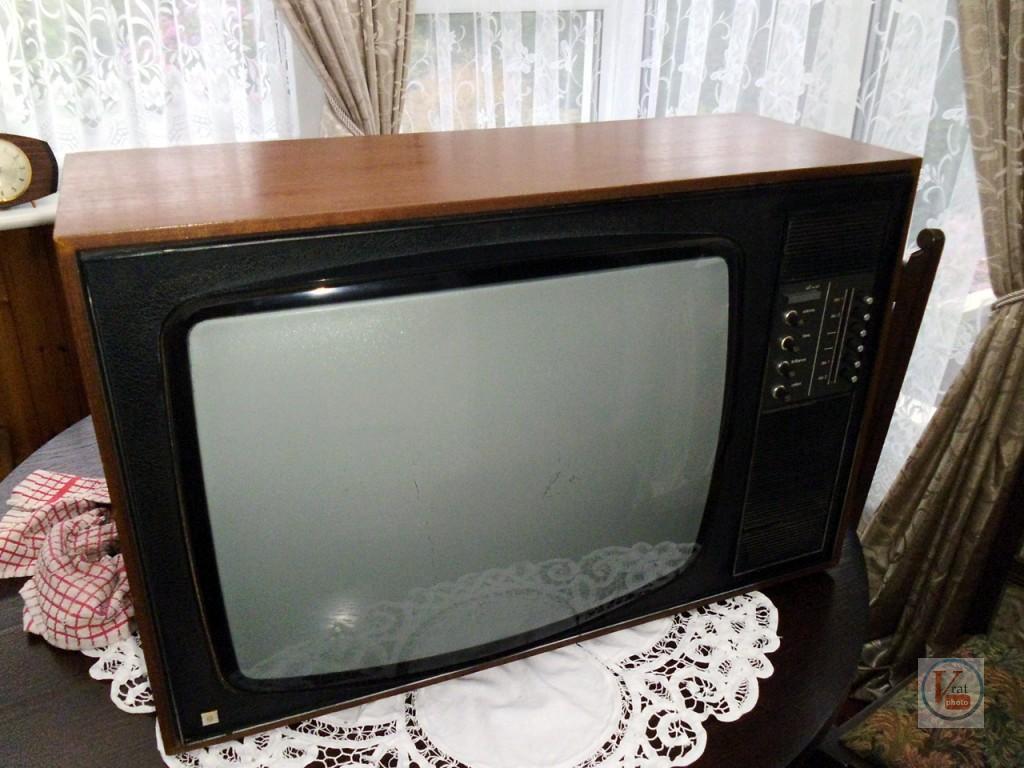 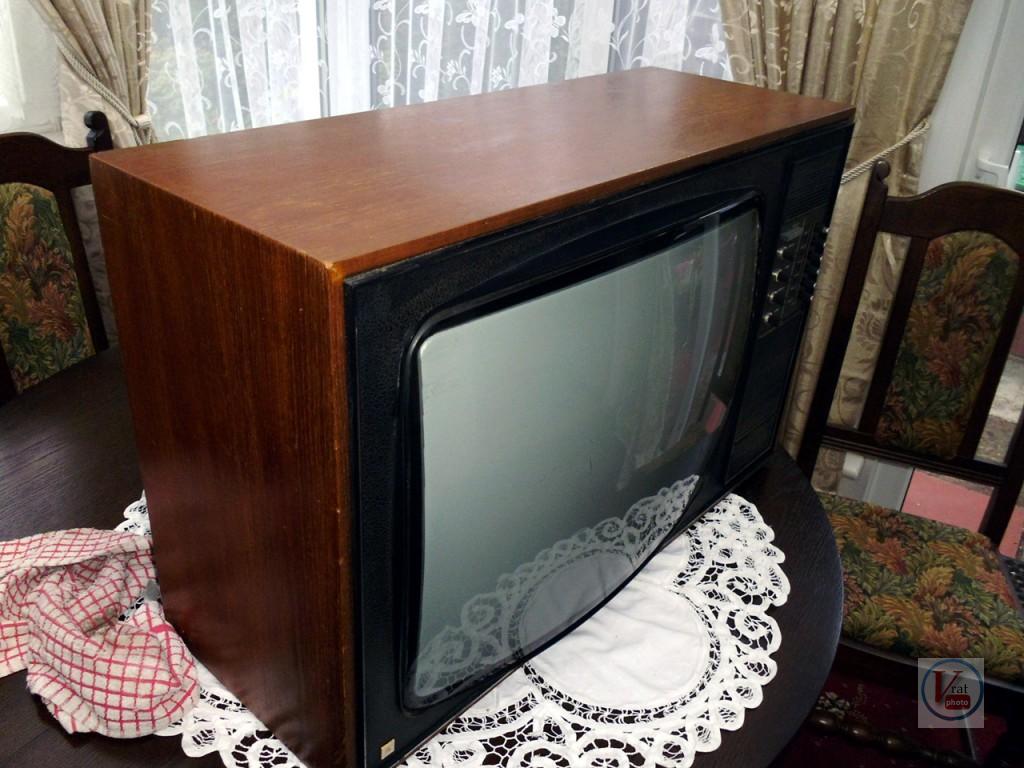 Rediffusion like so many manufacturers around this time, adopted the modular approach to their design of the chassis. This would eventually help usher in the era of field engineer panel swapping, leaving the bench techs to component level fault find when panels were returned to base. This greatly speeded up the number of calls a field engineer could make and customer down time reduced in the process.

The MK.1 chassis has two sprung twist locks top left and right, with a central hook lock . When the spring locks and hook are disengaged, the whole chassis can be tilted forwards. **

In this forward position the inner boards and components are revealed, along with the customer controls on/off, brightness, colour. volume and tuner etc.

** Caution you must ensure you first flip up the convergence panel which is mounted on the top centre of the frame. Failure to do this could prove disastrous. With the convergence panel left in the down position and the chassis is tilted forwards, means it comes into direct contact with the Tube neck and could snap it off.

Picture below shows the chassis in the locked up position. 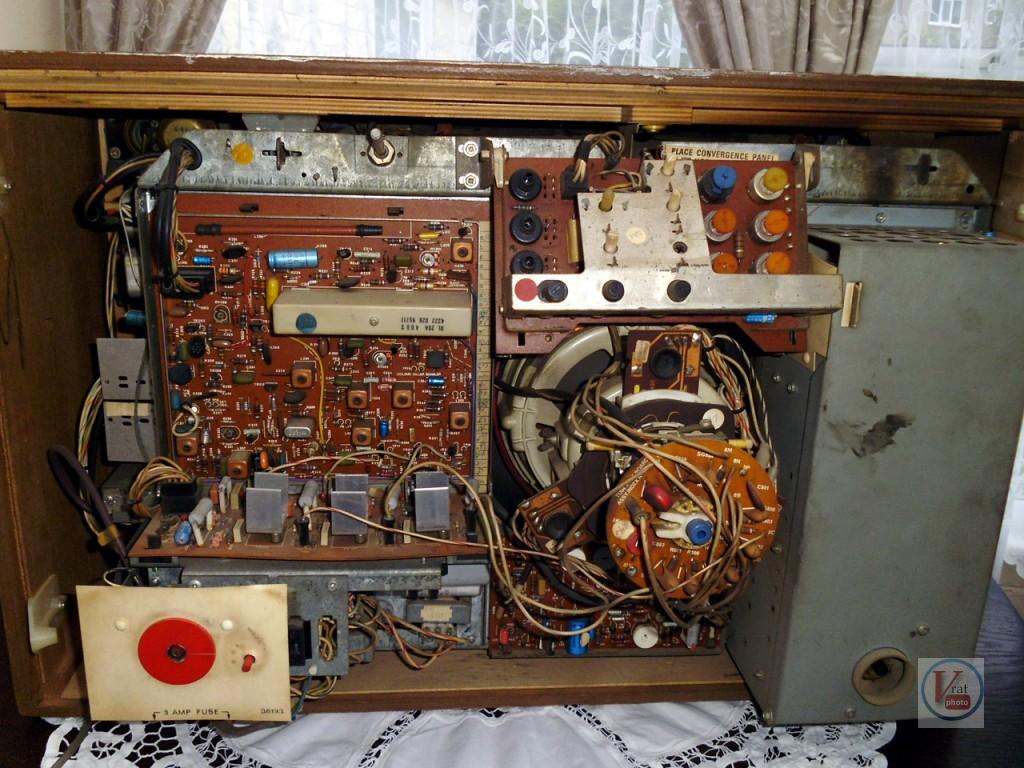 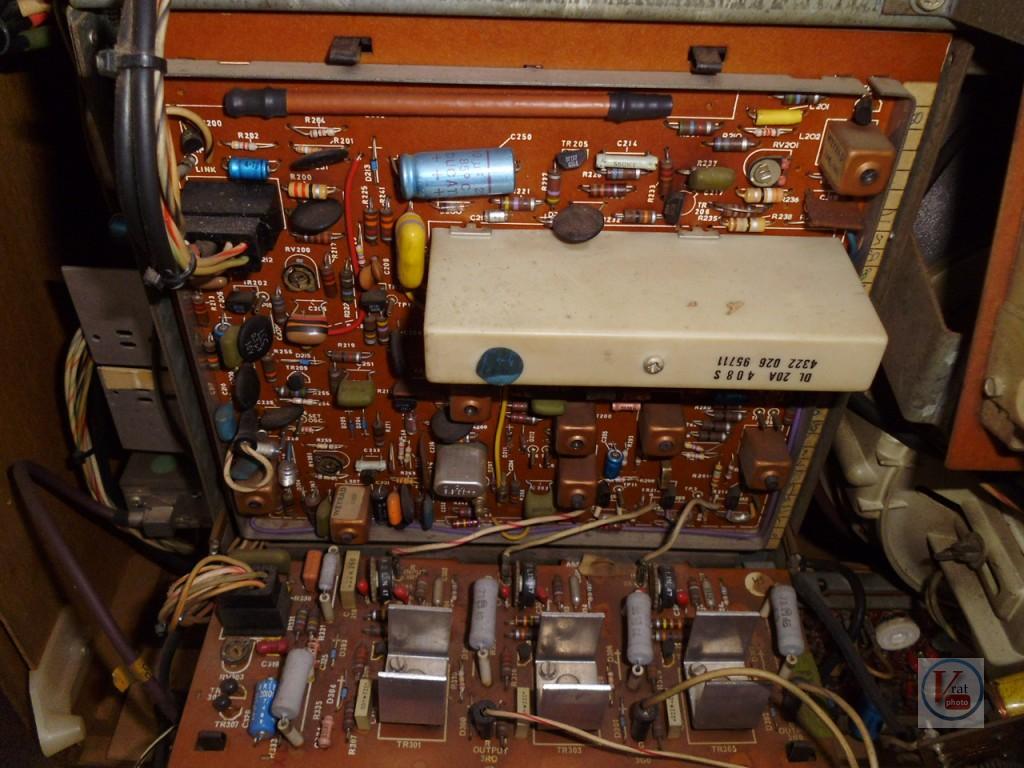 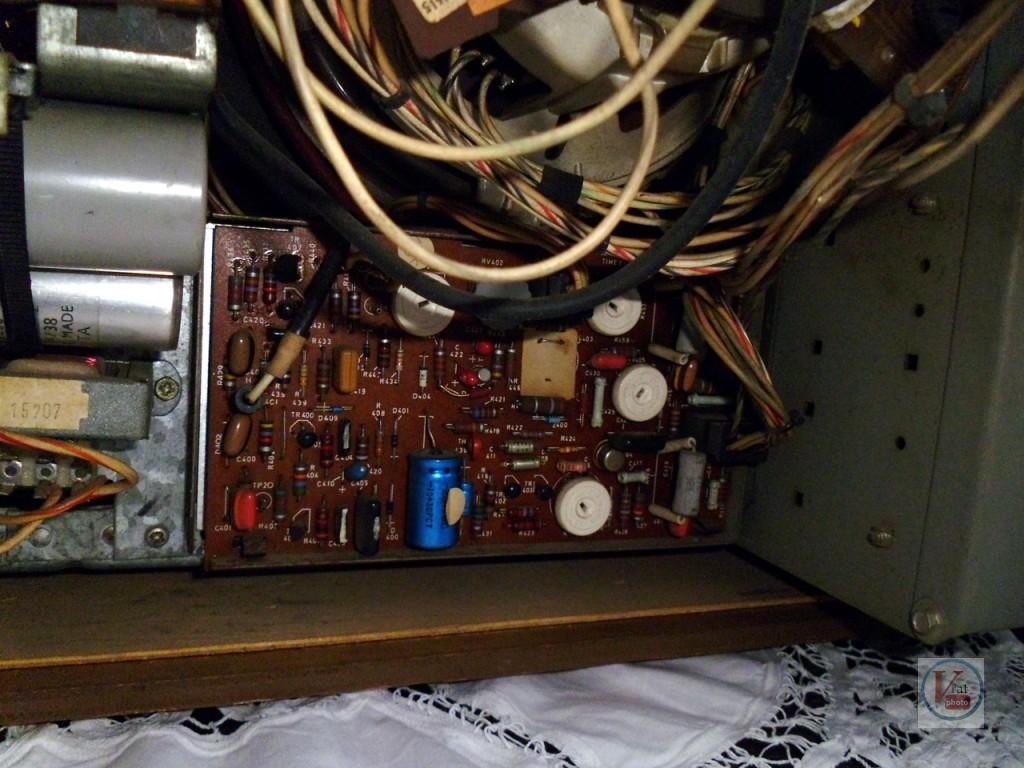 Well this set is D.O.A. quick inspection reveals FS601 the 3A power supply protection fuse is blown. Will now need to do some investigations looks like I get the fun one to fix again.

Well I thought I would take a look at the Time-base panel in case there was something obvious on there that might be causing the power up fault. No sooner had I looked at the panel a glaring problem leapt out at me. R453 was broken away at one end. This 39K 5W is part of a potential divider fed by via the 290V rail to  feed to the collector of TR408 BF337 which is the Line & Field blanking transistor. Could this be the cause? We shall see. Sods law though, I have a myriad of TV fuses in stock but would you believe no 30mm 3A. 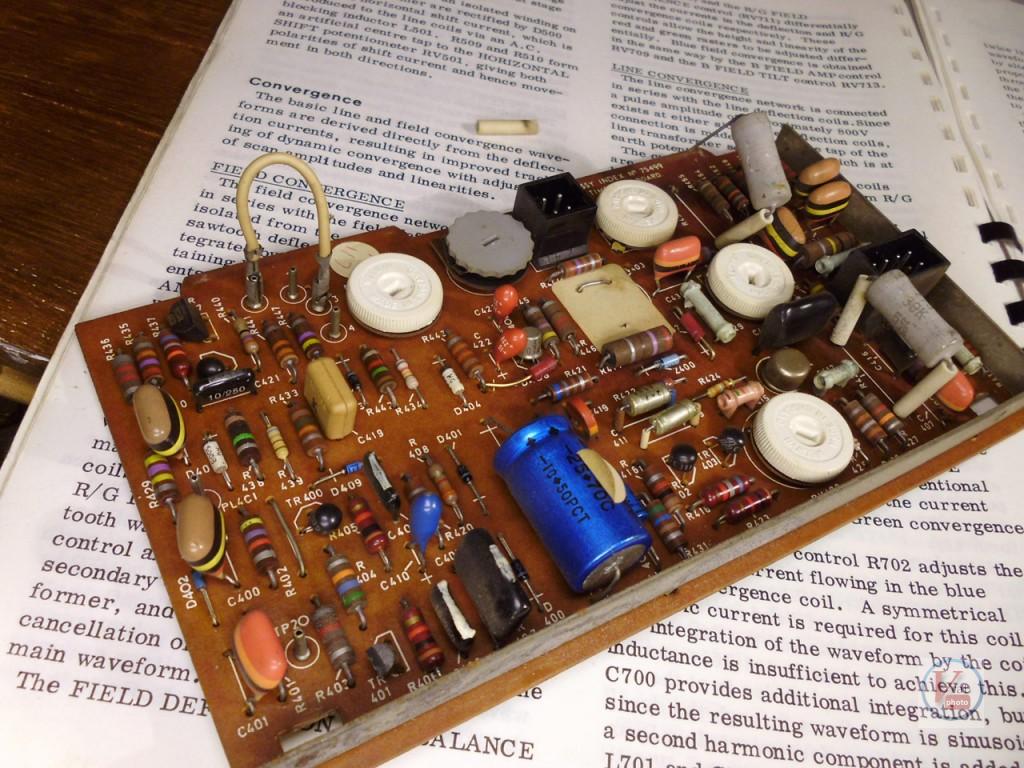 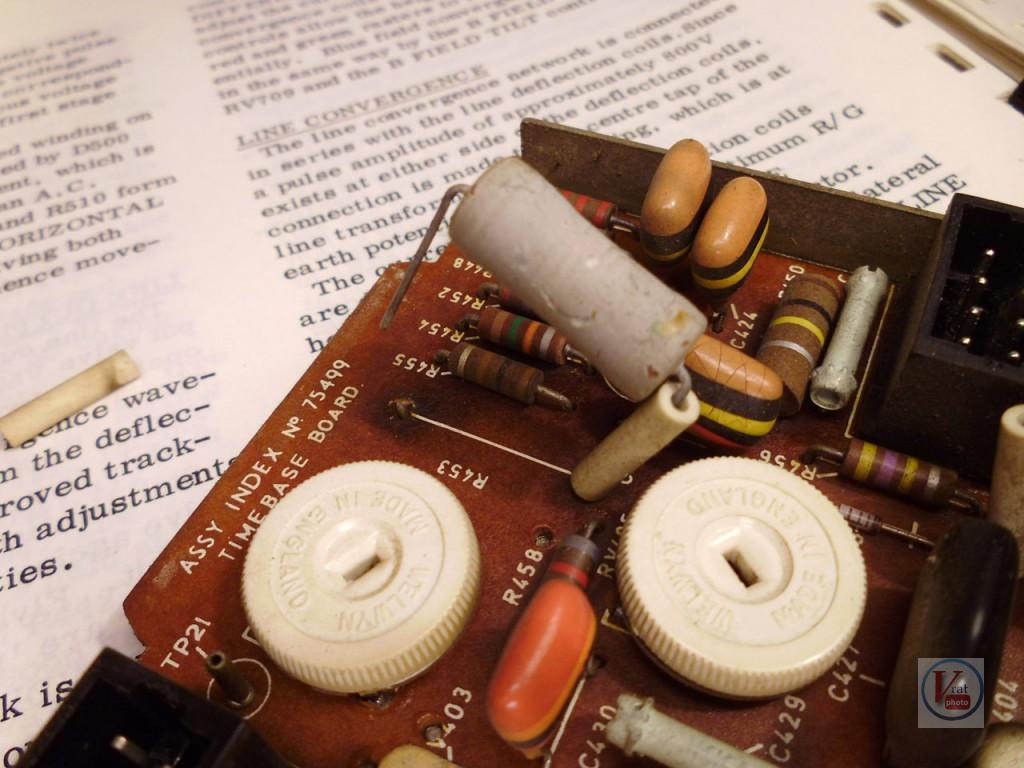 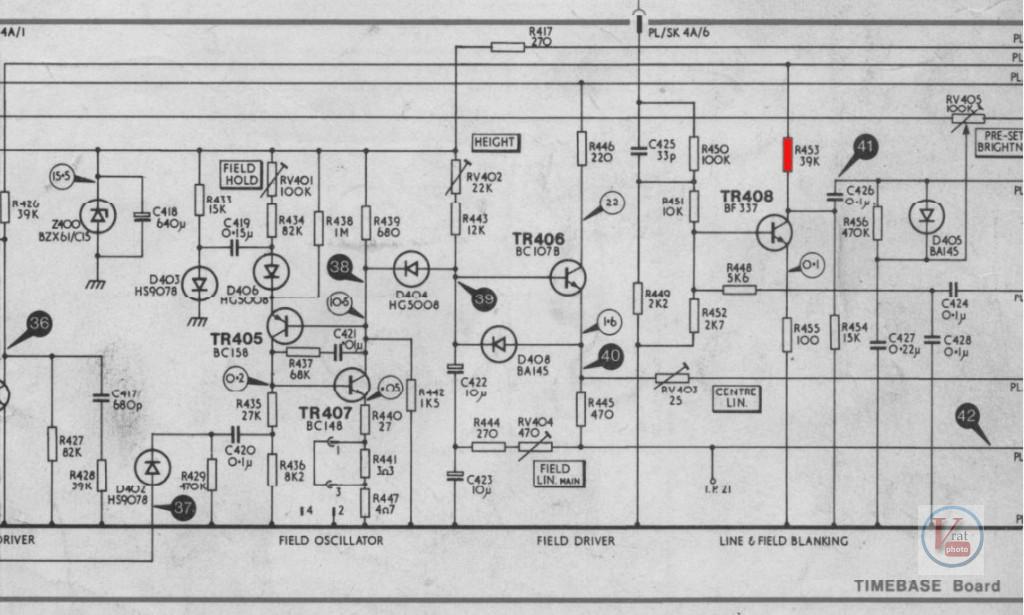 R453 repaired and the timebase board now reinstalled into the chassis. Before power up I snipped the filter cap C901 .1uF out of circuit as it was one of those grey Plessey caps. I didn’t want it going pop, I’ve now replaced it  with an X2 cap (see below). 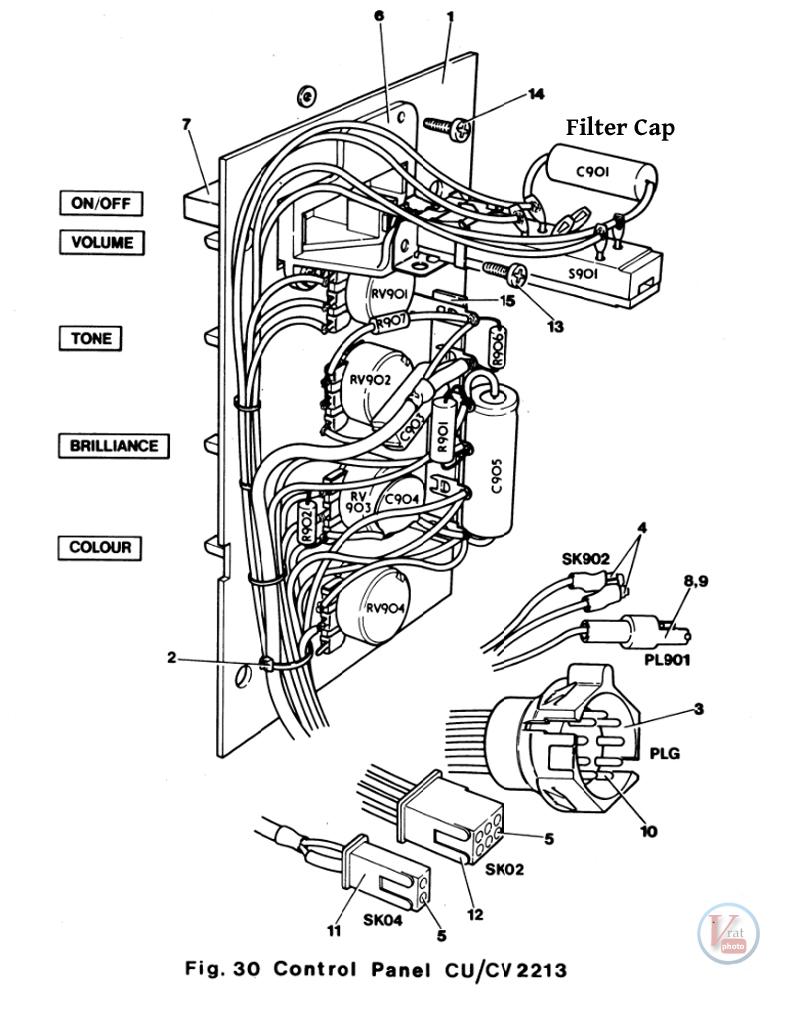 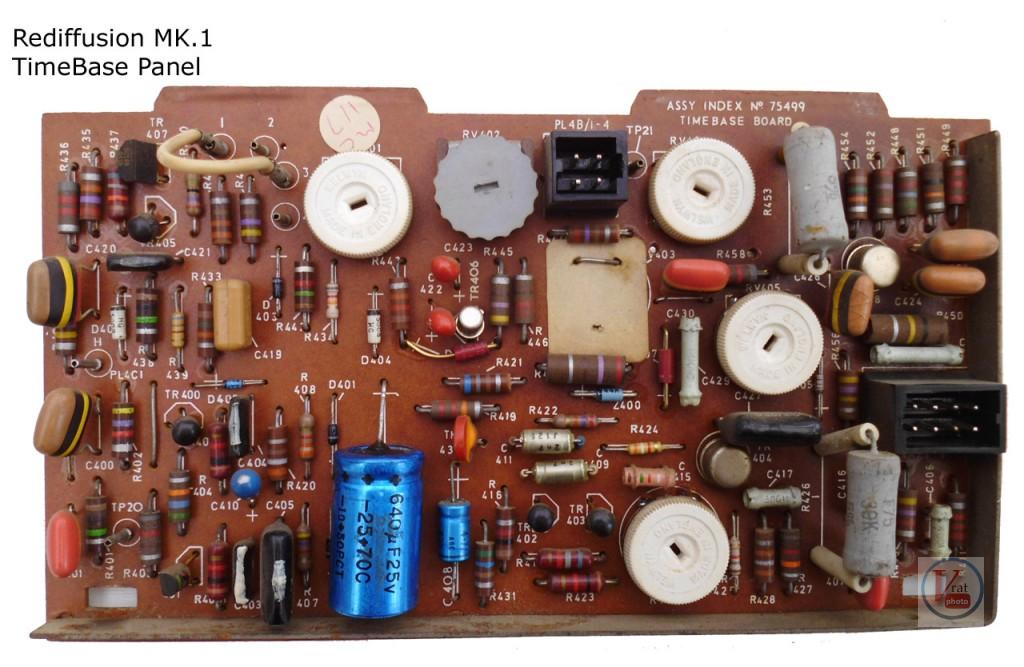 Whilst at it I thought I would test the A56-120X, after all if its a dud I don’t really want to waste time, effort and parts. Looks like I have a set with a ReGun tube its labelled ” Suffolk Colour Tubes” and has a date of 22/8/80 so looks like 22nd Aug 1980.  Thankfully its looks to be a reasonable tube. The blue gun was low ( down in the yellow section of the meter) and didn’t recover with sustained running. I performed a clean & balance and blue reads as good as Red & Green. This CRT should give a good picture.

All I need to do now is wait for the 3A 30mm fuses I ordered to turn up then this story can continue. 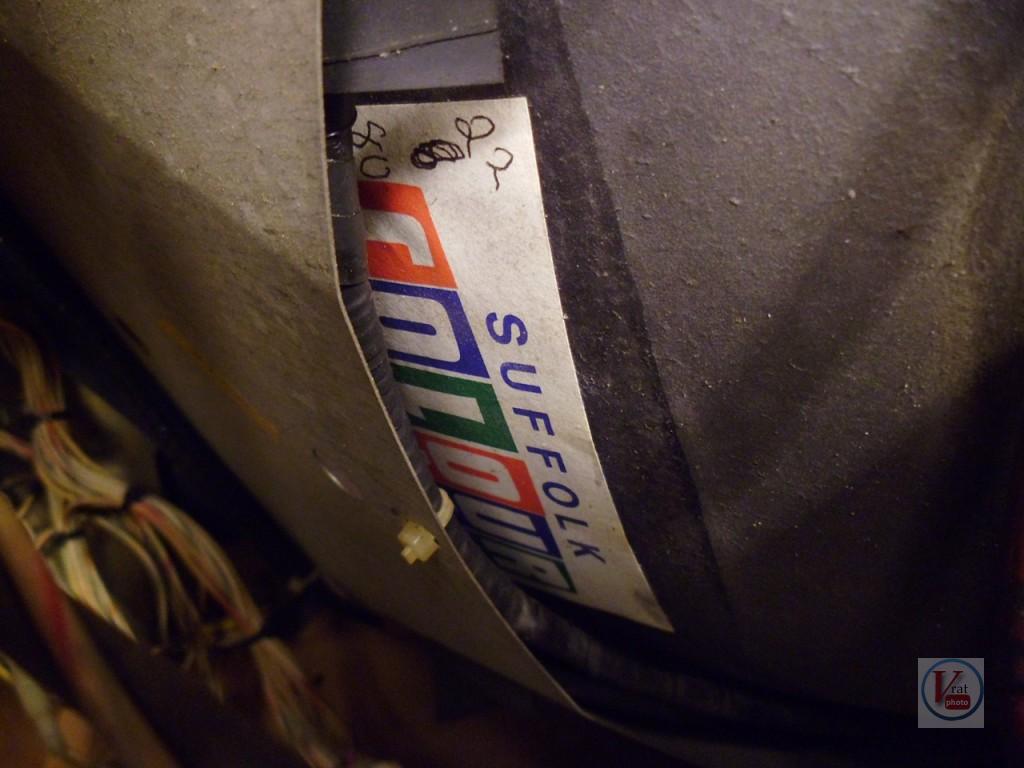 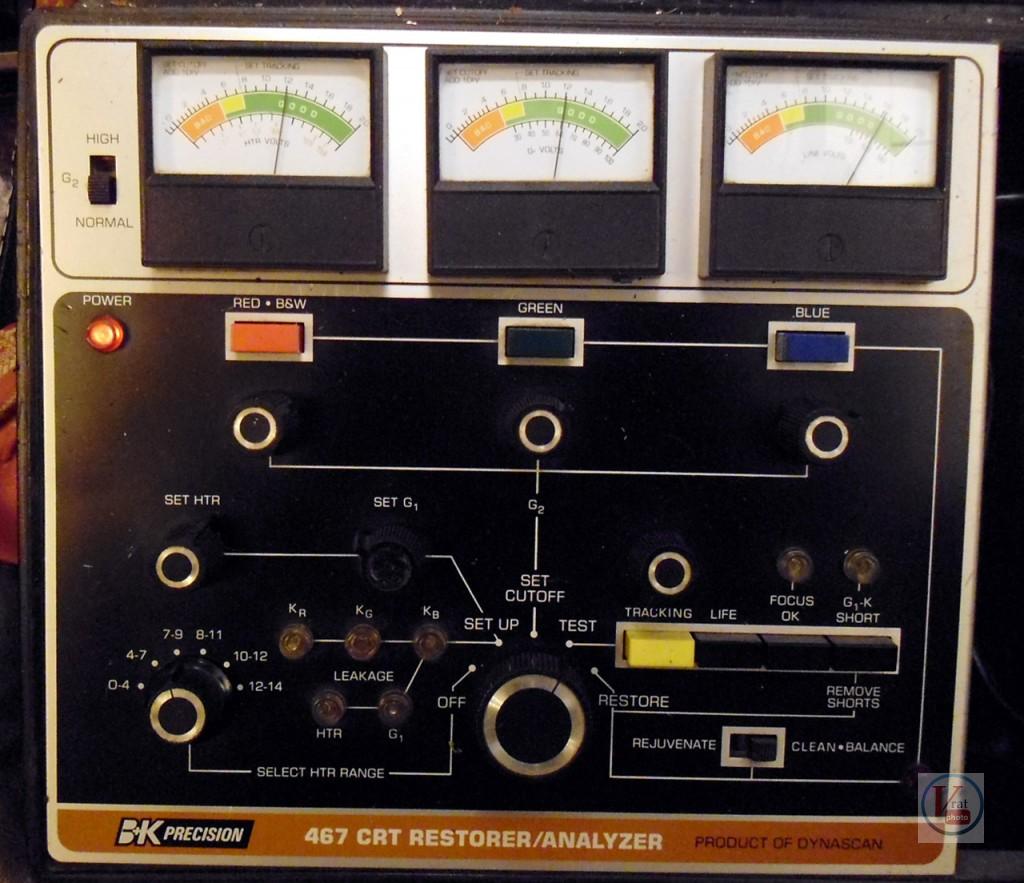 Spoke to Malc ( Ex Rediffusion Eng) I was looking along the lines of filter cap, boost cap, he suggested the possible cause for the 3A blowing to be D600 BY127 H.T. rectifier being s/c. On the PSU board we also have D601 TRC100P L.T. rectifier & D602 TRC100P . This is a tiny little panel located behind and below the decoder. The decoder has to be removed to gain access. The little panel can then be unclipped from its securing spring. Its a tight job as the leads are not very long making it a tricky board to get at.

Will check the diode and report back. 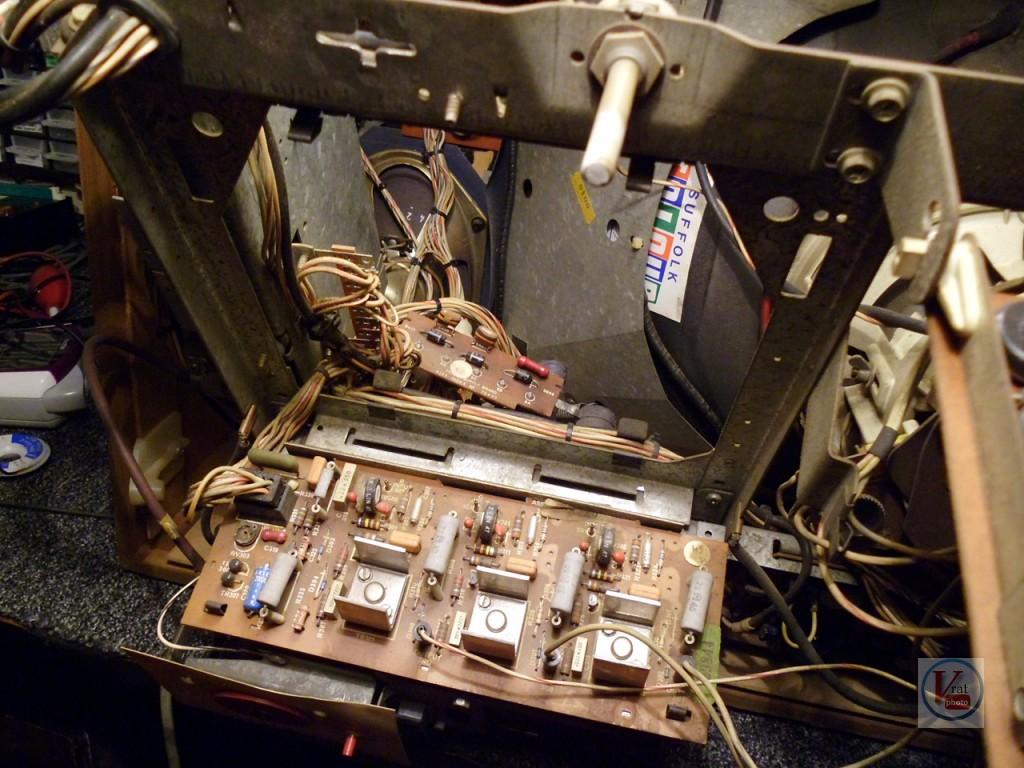 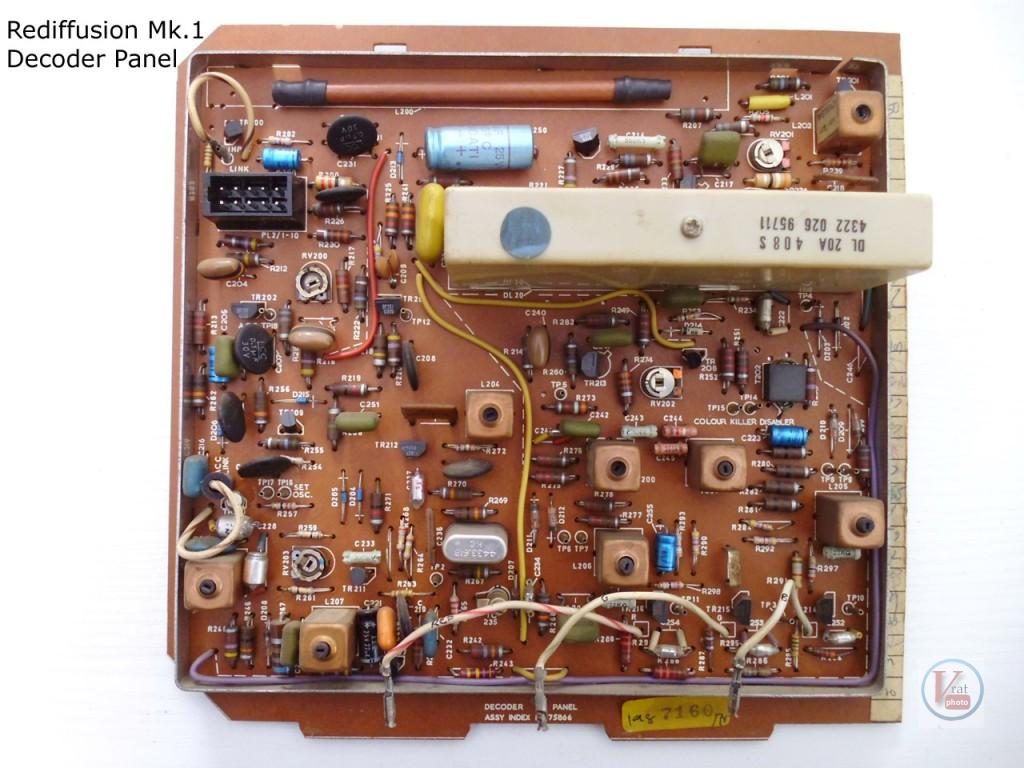 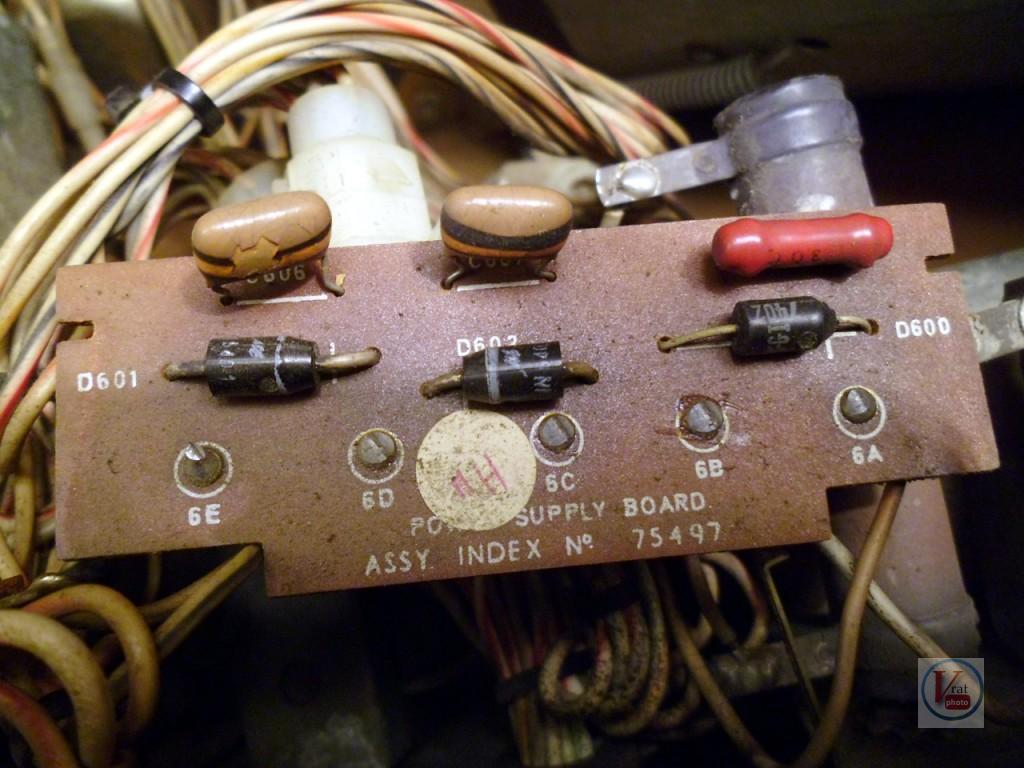 Here is the RGB drive PCB 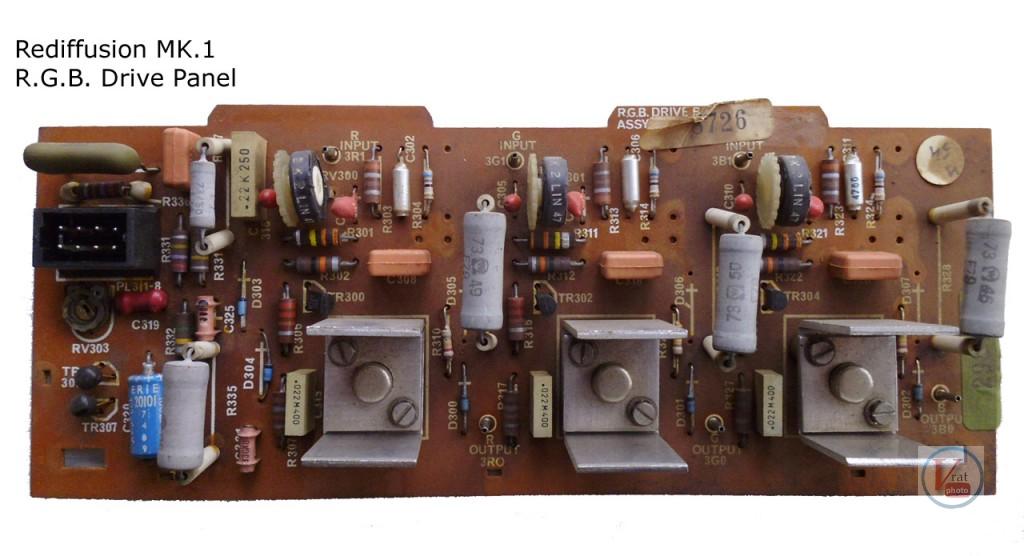 So the hunt for the 3A fuse killer continues…. 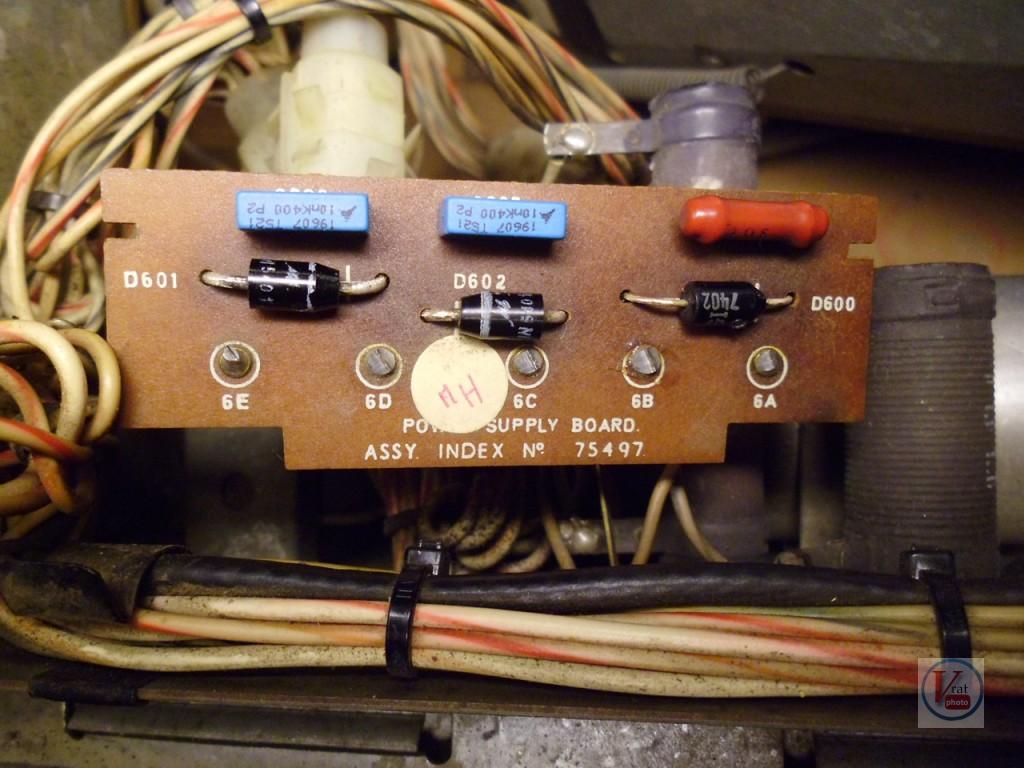 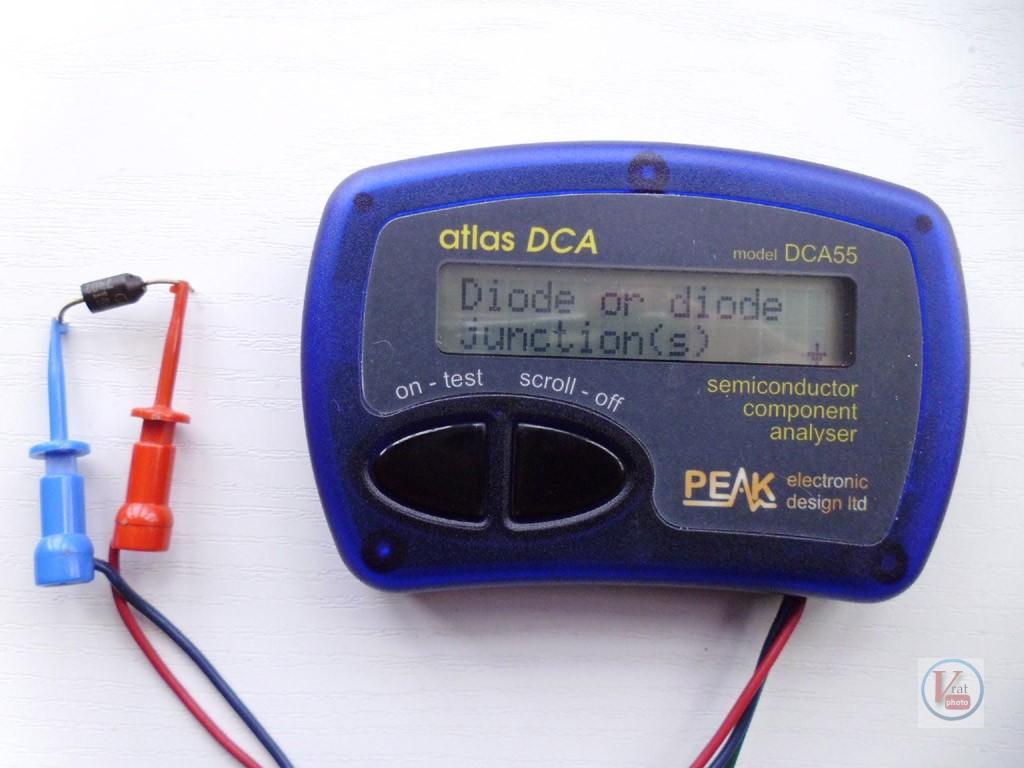 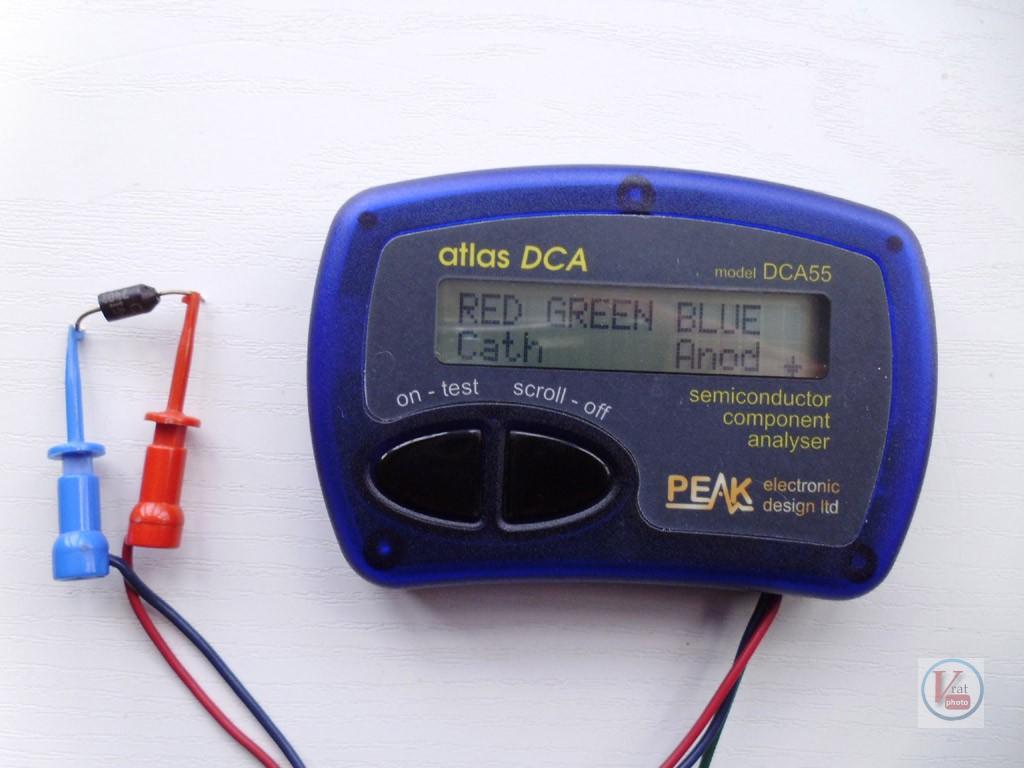 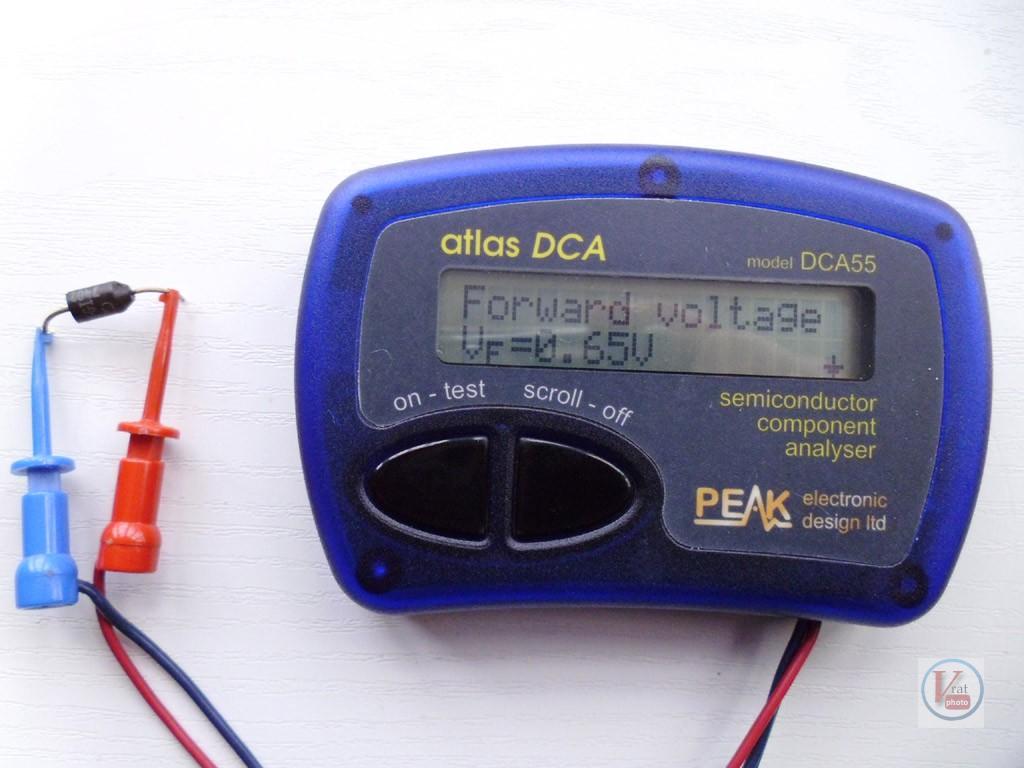 Update: FS601 not blowing now but the cut-out still trips.

I decided to use a 3A 20mm fuse which luckily makes contact with the in-line holders contacts. Powered on and the cut-out trips but the 3A fuse does not blow, well that’s an improvement. The protection via the cut-out works in two ways and has two elements.  One for mains current the other cathode current of the line output bottle. So excessive current in either or both will activate the cut-out

To prove if the fault lies on the timebase board I replaced the timebase board with a spare. Powered on same scenario. So what’s the chances of two boards having the same fault, not likely. So the fault must exist elsewhere. Now to check the 24V on PL4B/3 or DC short-circuit somewhere, Line output valve or the RGB panel. This is turning out to be my usual extended PITA…… the s/c fault could be anywhere.

So I’ve established the 3A fuse is now OK but the cut-out is still tripping. The 2A fuse is OK. Replaced the Timebase panel and the same scenario. Then reset the cut-off and powered on whilst checking PL4B/3 on the timebase panel, there should be 24V here…. well there’s nothing, the cut-out operates and monitoring PL4B/3 just shows a few millivolts, getting closer? Doesn’t feel like it I reckon the 24V is a red herring, its likely shutting down before.

Whilst scratching my head trying to figure out what is the cause of the cut-out tripping, I noticed the core of L501 which is on the LOPT panel, had dropped through its core and was resting on the chassis.

I pushed this back in and temporarily secured with a bit of blutack. I then further observed that RV503  (1K ) the Vertical Shift pot, had a bulge on one side. Poking this bulge with a screwdriver made it drop off ( see below) revealing the core wire-wound track. Must have over heated at some point in it life. I decided to replace the pot (see below) seeing as I was in there with an identical NOS 1K I had in stock.

Could this be having anything to do with the cut-out problem? Whilst I find these faults, they may as well be addressed. Back to scratching my head ………. 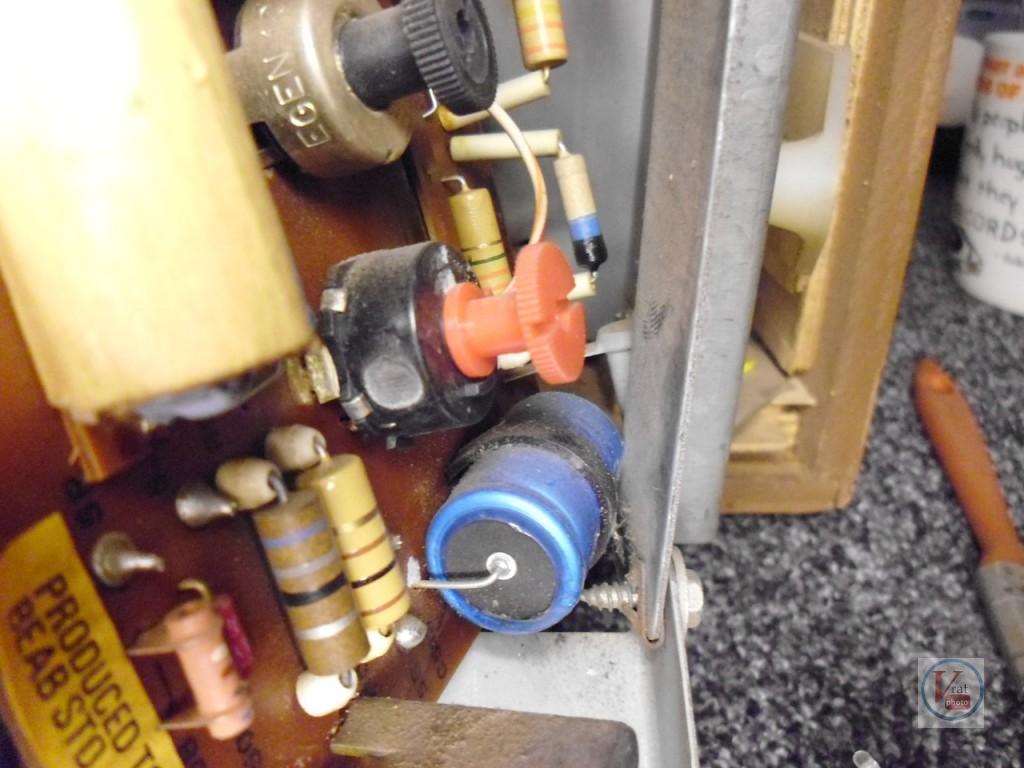 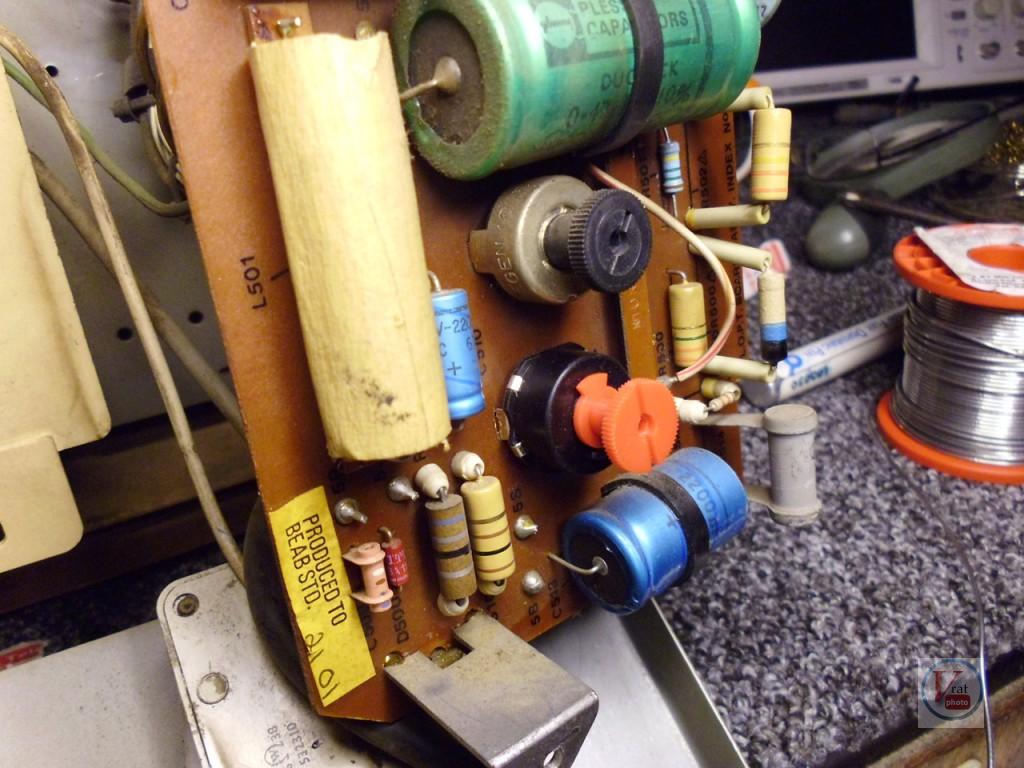 As I stated above,  removed the PL509 to test the heater continuity, reseated the valve, reset the cut-out and powered on. Again degauss thump heard, audio hiss from speaker noted, PL509 heater lights up, 9-10 seconds later cut-out tripped.

Reset, cut-out, tried again,  this time efficiency diode PY500  also now lights up ( that’s a new step) and the set stays on a little longer before tripping. Reset cut-out for the third time and this time the set  stays on. A raster appears fills out screen then fades out.

With the set still operating I connect up the test card generator and start tuning. I can see faint flashes as I tune,  then when on signal, bingo! up pops a Black & White test card F. Setting the brightness and adjust colour, it all comes alive albeit a little in the dark side but that probably due to brightness set up required or component drift/failure.

Need to run through the full set up procedures as detailed in the manual, then leave it on soak to flush out the stressed components. 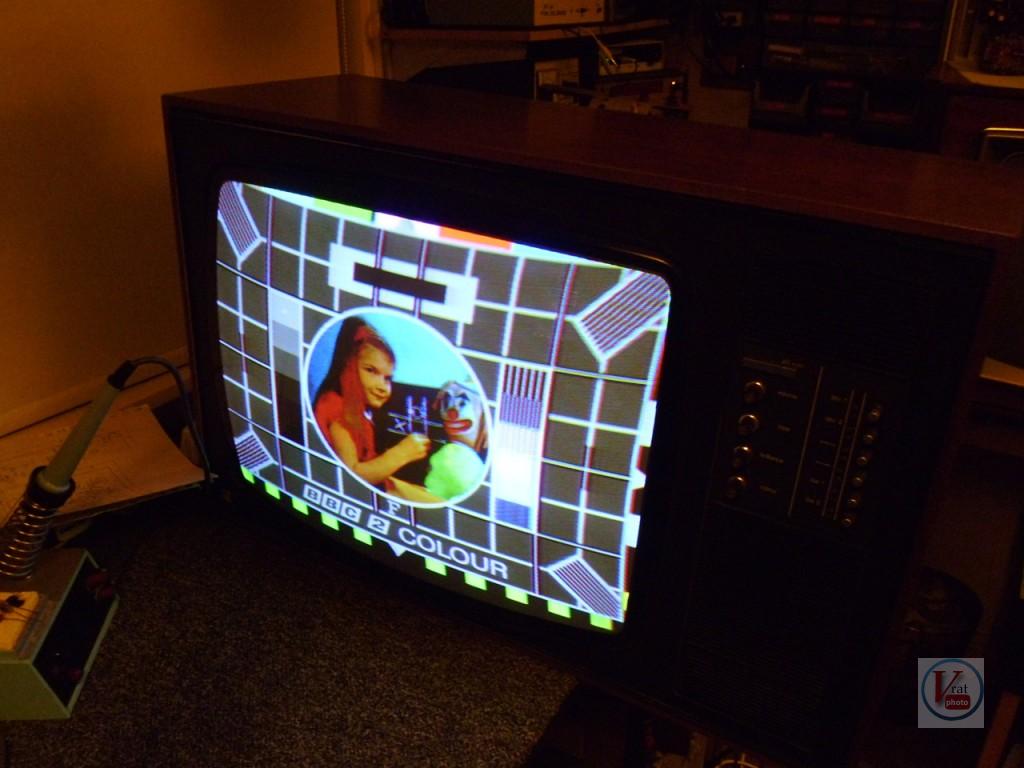 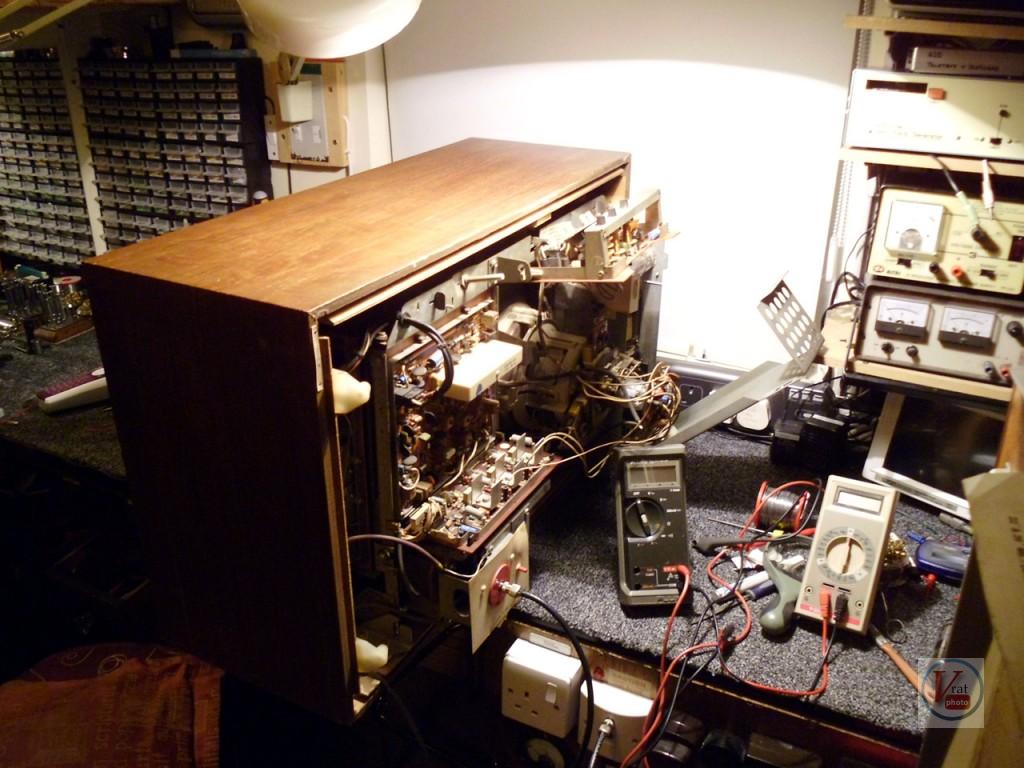 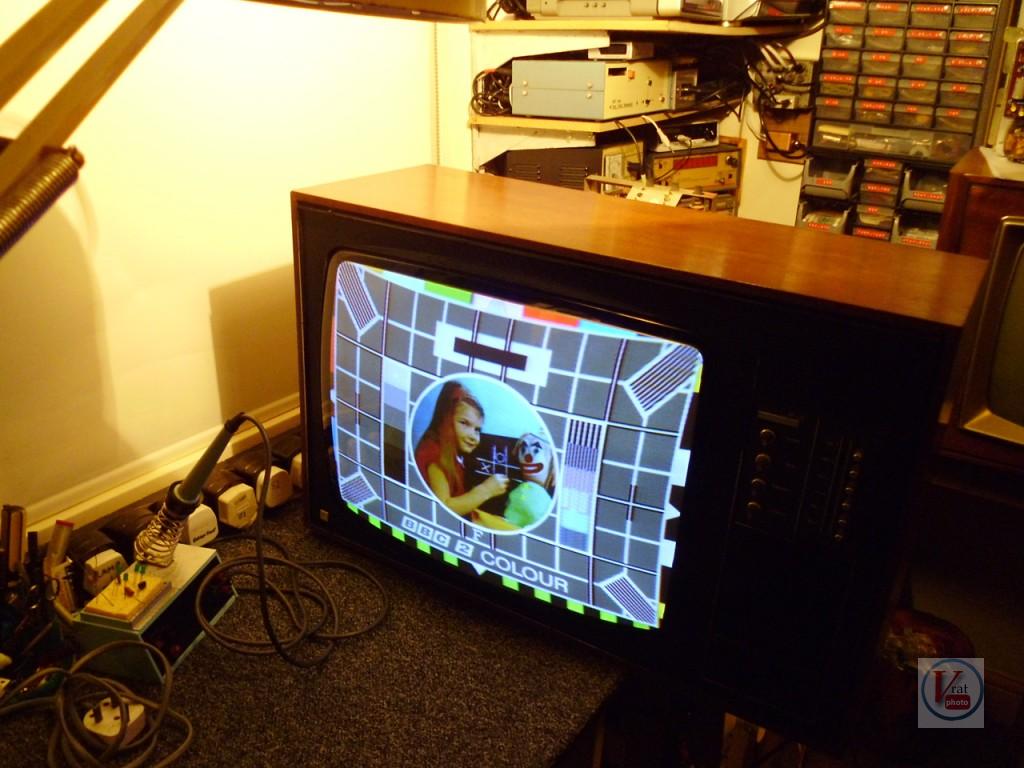 No work today other than reading up on the electrical set up procedures for decoder,RGB board, timebase, convergence and EHT.

One thing I have noticed is the three A1 switches S700, S701 & S702 on the convergence panel have been removed. Checking the board on my cable chassis shows them to be missing too. By the way I plan to get the cable chassis up and running too, if anyone has a Rediffusiion frequency translator box ( Telebox ) going spare, I would be interested. 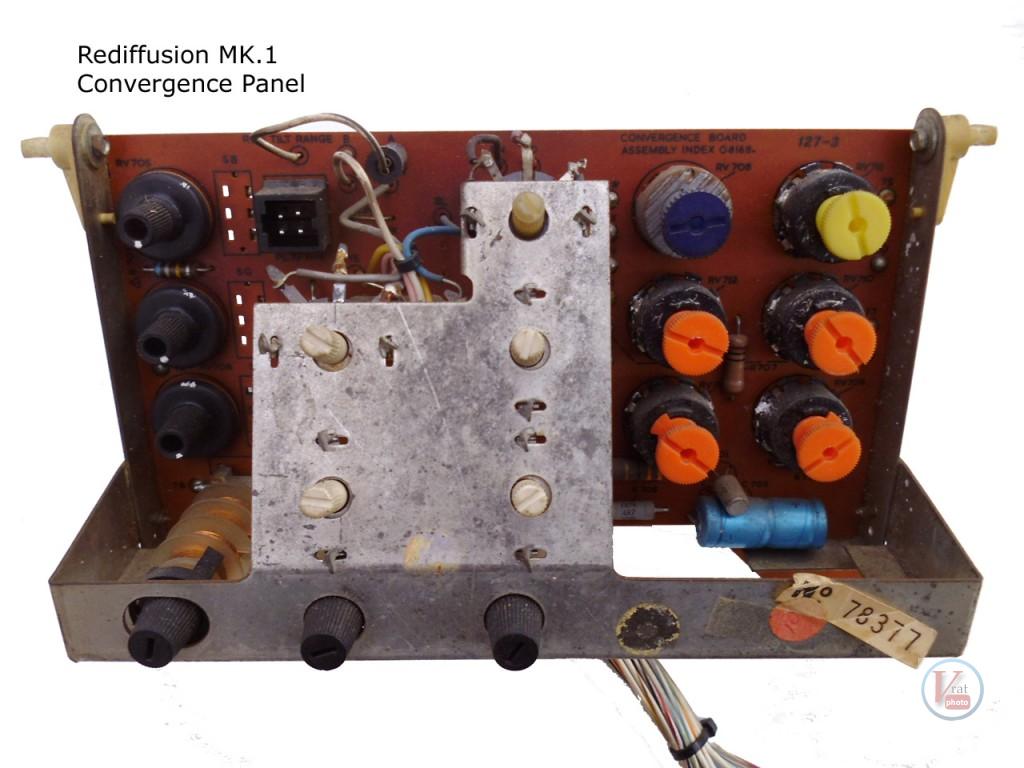 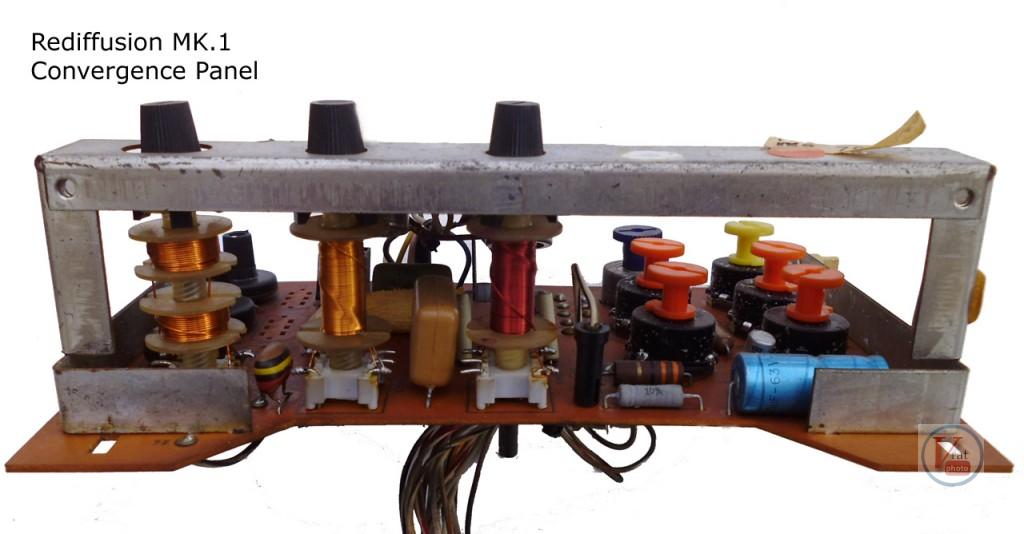