The G8 was designed on a modular basis, with six replaceable modules or other sub-circuits, nothing new to the likes of Thorn who had been doing that since 1968 with the 2000 series chassis and subsequently the  3000/3500. However Philips previous chassis the G6 was a nightmare to service with hard-wired interconnecting leads, not service friendly. The G8 took a step in the right direction with modular design and was the replacement for G6. It was manufactured between 1970 and 1977, which if you think about it, quite a considerable time indicating a very successful chassis run and popular with the trade a public alike. See here for more specific G8 info. 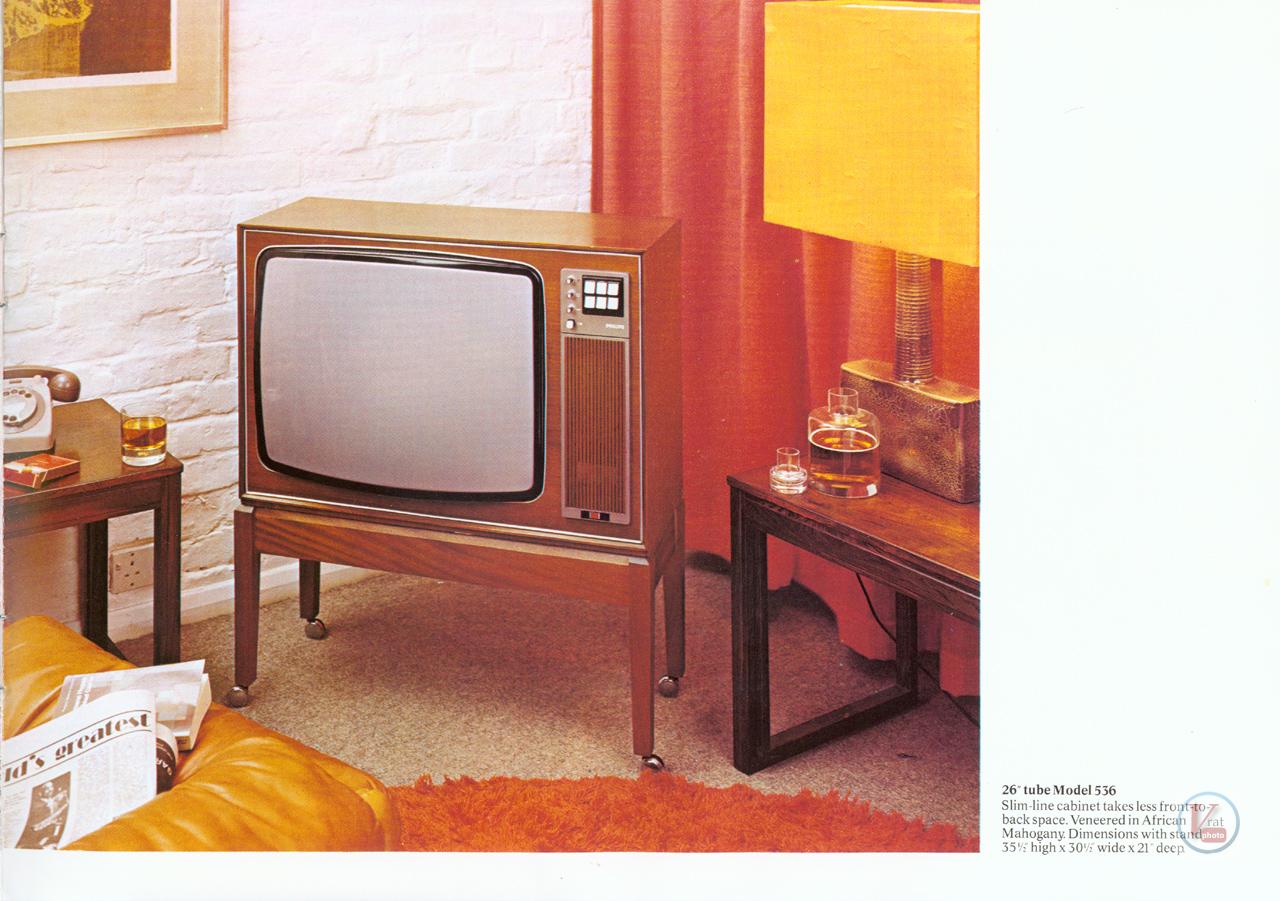 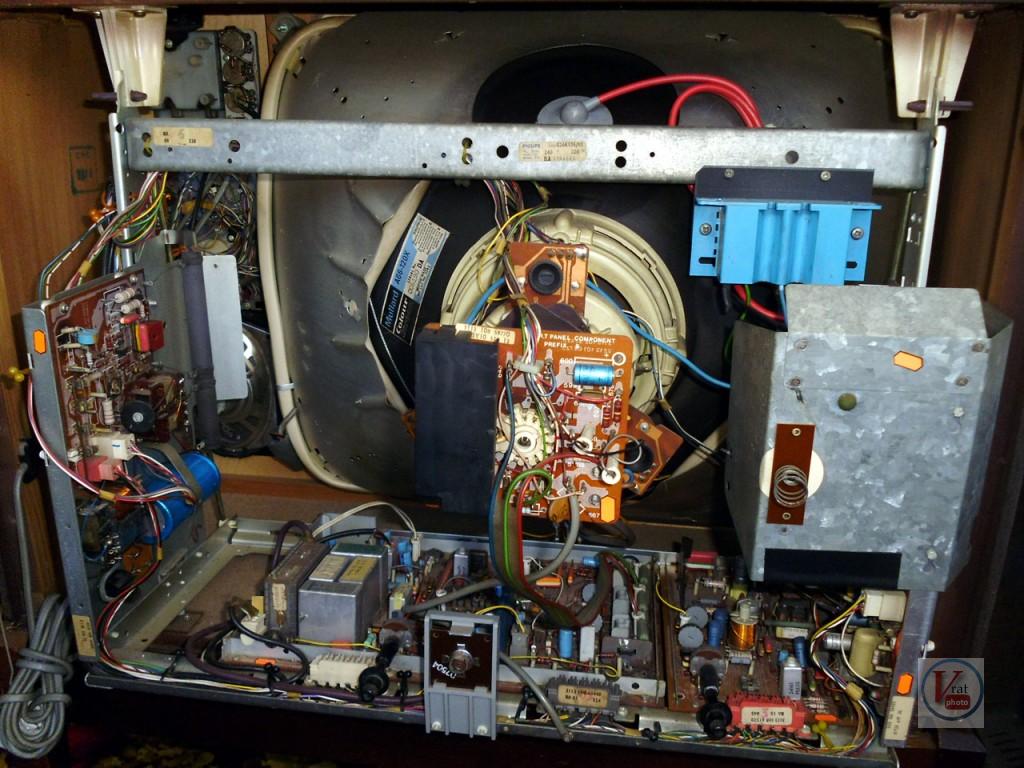 This G26K536 is a 26″ colour television receiver incorporating the aforementioned G8 chassis. The cabinet is a dark wood version of the G26K526 and a matching all wooden stand was supplied as standard.

The cabinet was kept to a minimum to achieve a slim-line appearance. The ” Electrobutton ” unit employed incorporates the programme tuning controls in a single assembly thus enabling the stations to be tuned from the front. The A.F.C. is automatically disabled when the unit is hinged open in order to facilitate tuning.

Convergence controls are accessible for the engineer from behind the front grill, this made the set very reliable as the panel did not suffer from heat related drift. 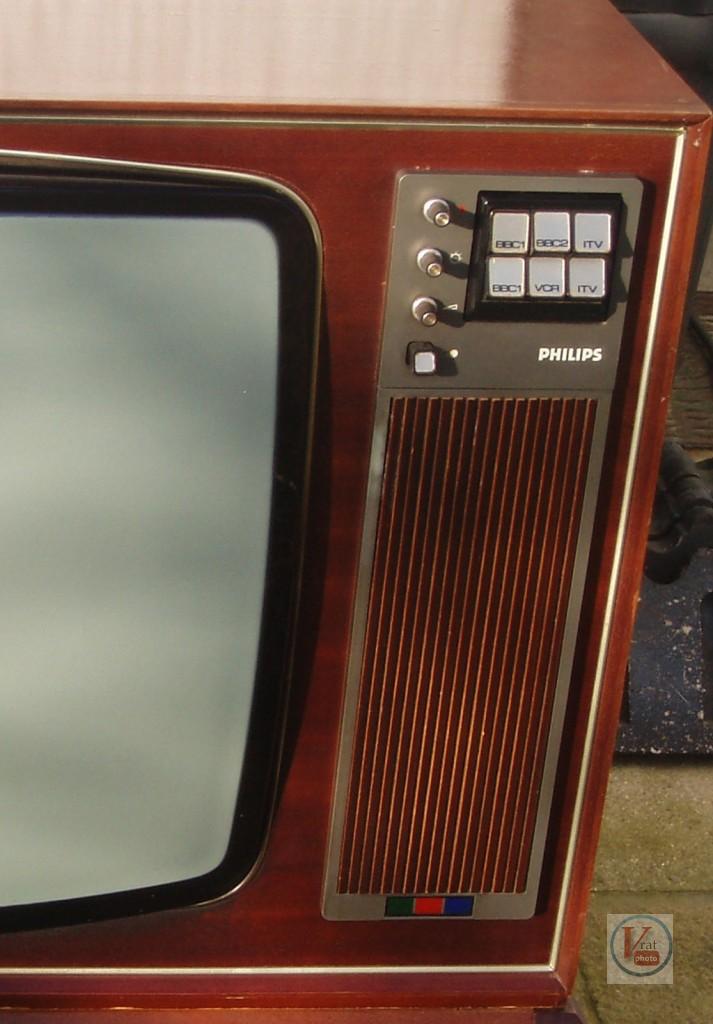 This set is an earlier version that had the convergence panel mounted as shown below. Once the bean counters and cost cutting got more entrenched this was moved to a hinged module at the back of the set. This degraded reliability as it suffered from heat related drift from the droppers and the pots succumbed too. 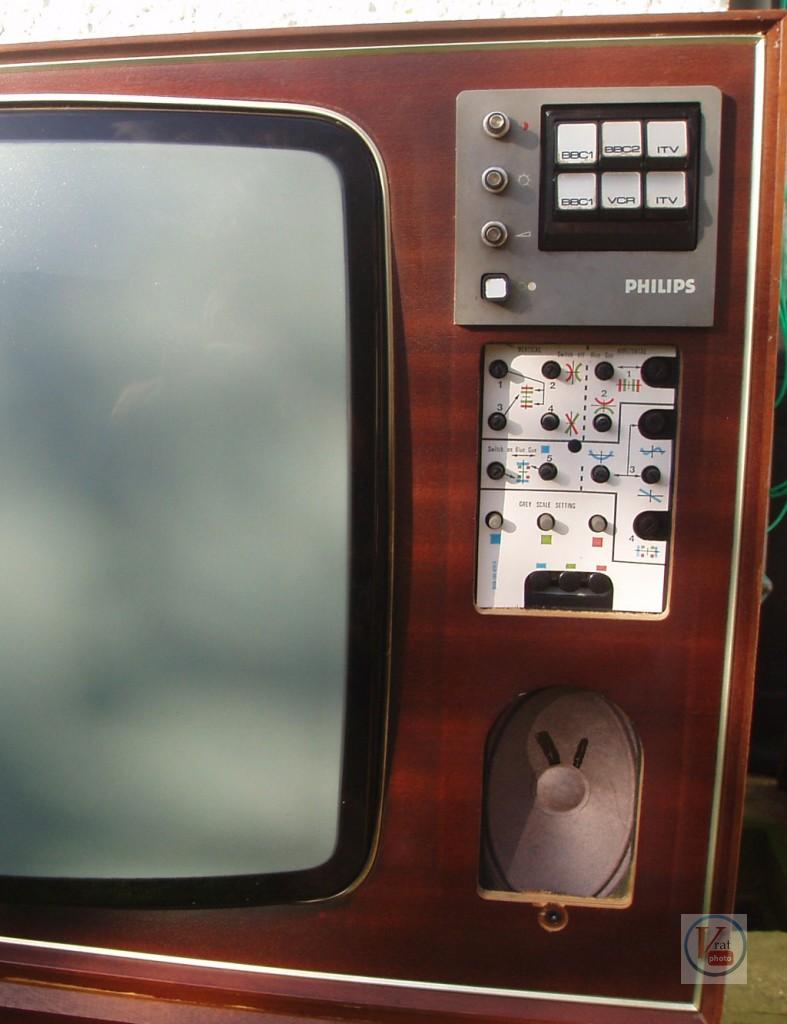 The interior of the G8 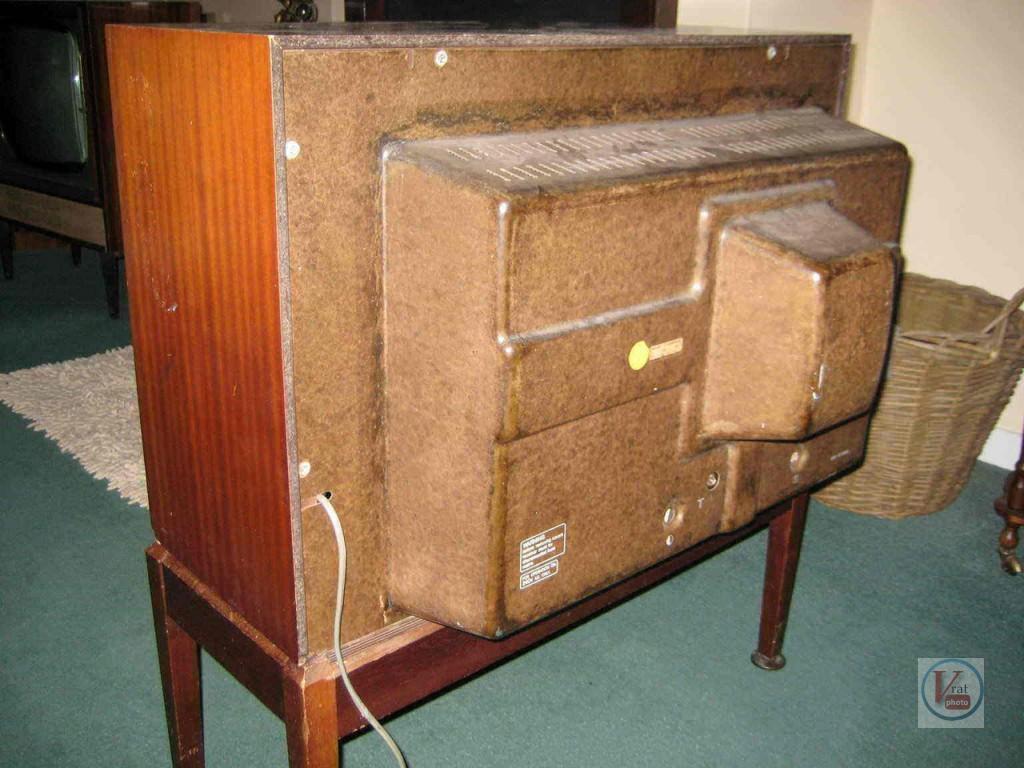 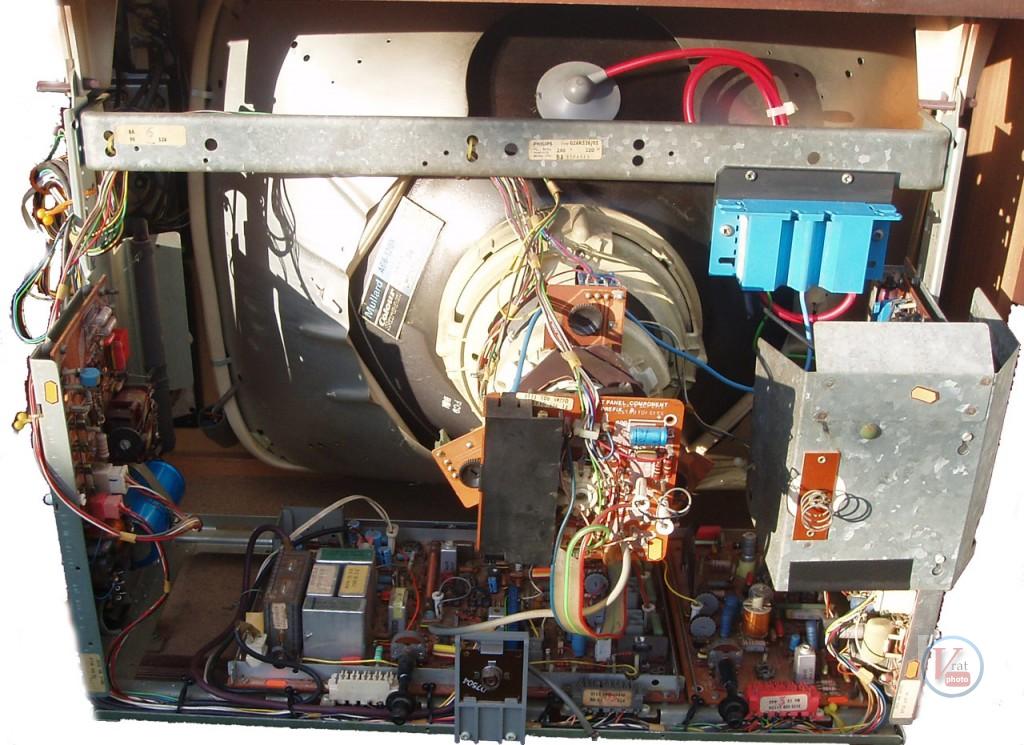 I have a couple of spare G8 panels, not sure whether they will be needed or of any use. Whilst I’m waiting for this TV to arrive I thought I would show the Line module.

This module includes the Line Drive with the distinctive and now notorious “Green” Fly-Back Tuning caps, four of them .0027uF 1500V  These are a change on sight to ensure the safety of the CRT and the LOPT. The module also includes the Line scan PCB and Line output Transformer. 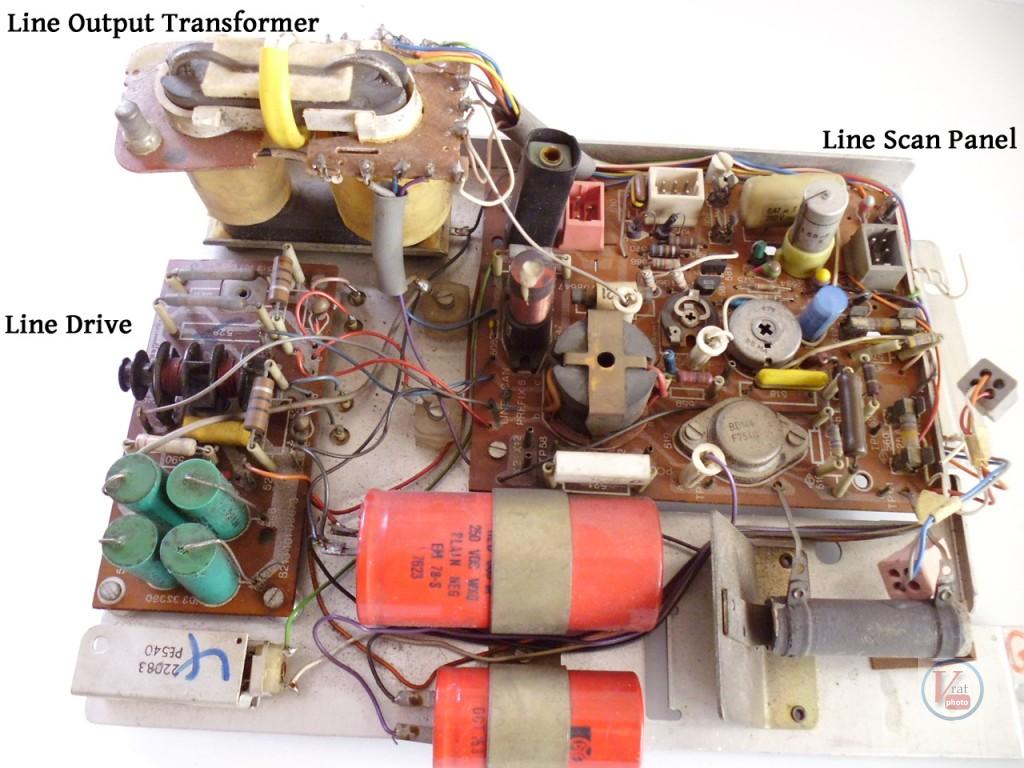 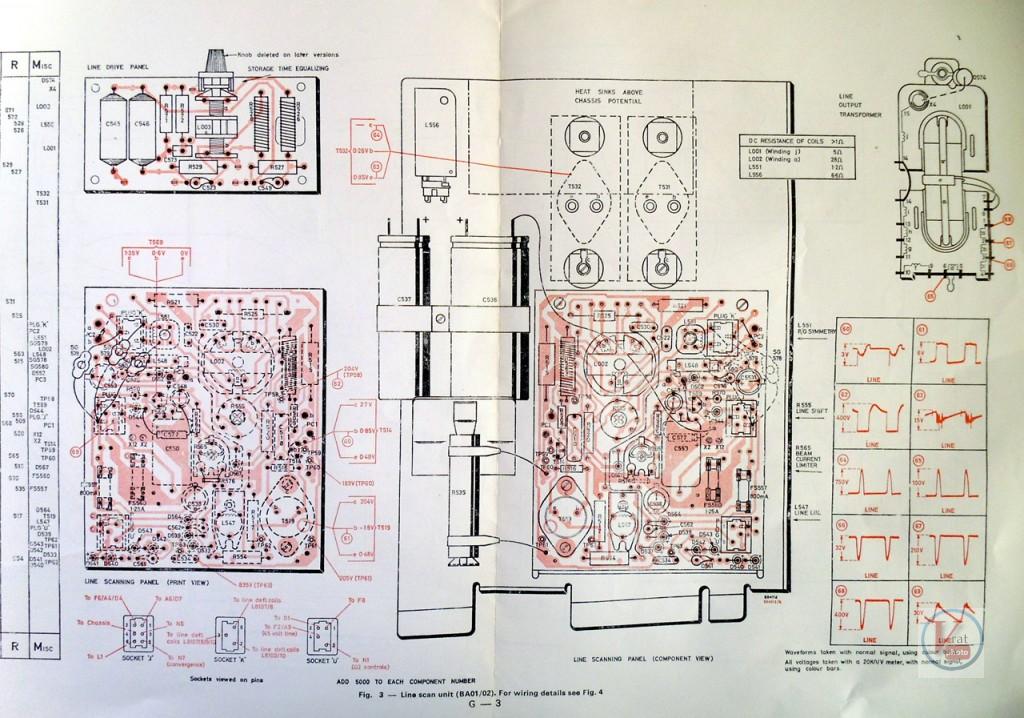 The last and current fault this set displayed with the previous owner was an odd raster, Black on the left-hand side and bright white on the right-hand side.

According to an article in “Television” (Thanks for the tip-off Steve) this is likely due to the following:-

This is likely to be an O/C resistor R212 (750K) on the combined decoder/IF panel. Apparently when this happens the gating/clamping pulses don’t reach pin 10 of the TBA 560C chroma/luminance signal processing IC.

Looks like the above is true, I located R212 which feeds the gating/clamping pulses to pin 10 of TBA560C. As suspected it was open circuit. Need to locate a 750K or make one up to that value. 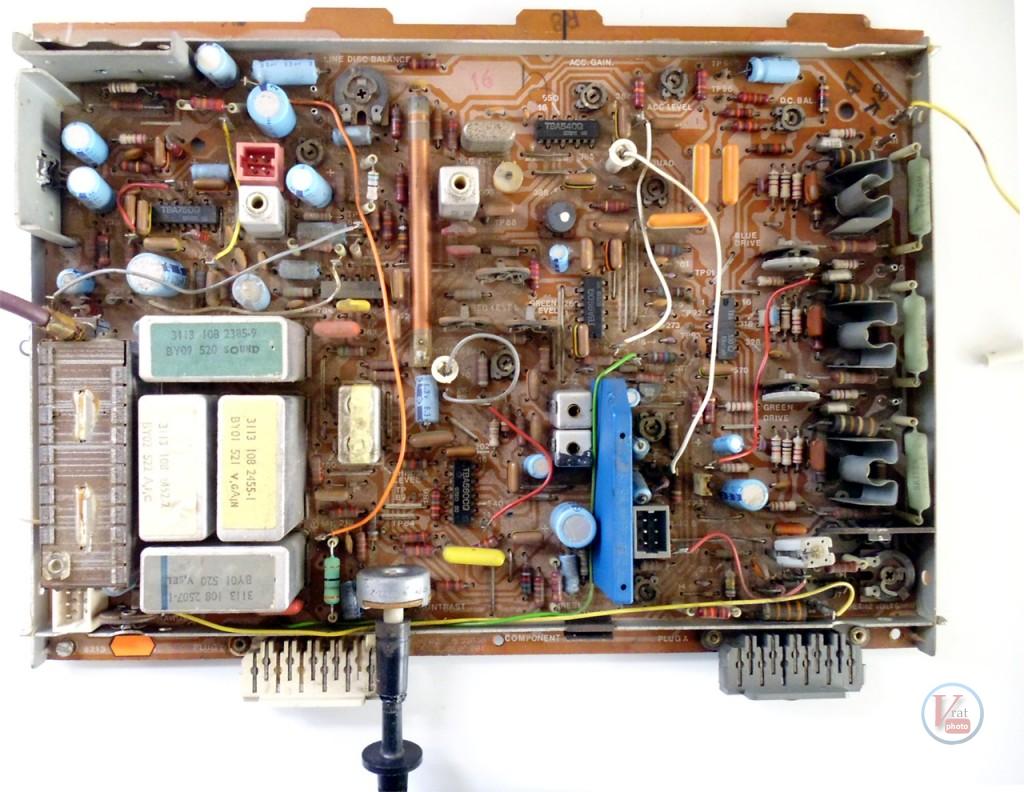 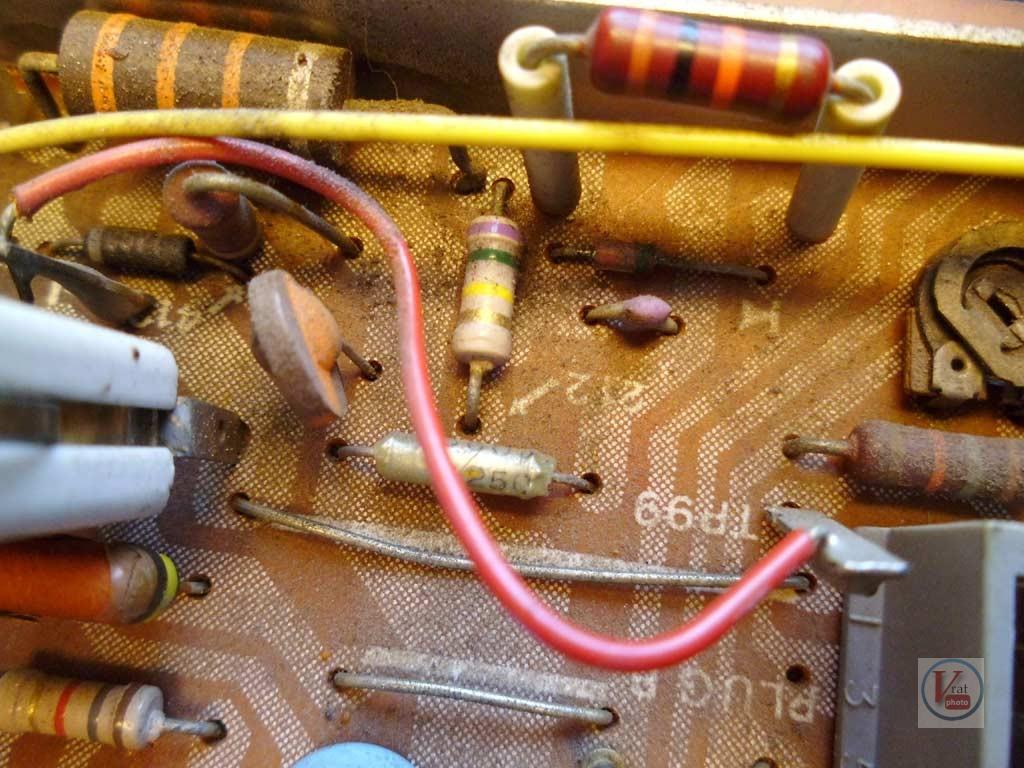 Fitted a 680K + 75K in series to give me 755K, close enough to the original 750K, this cleared the fault on the raster. We now had a full raster, fed in Test Card F, tuned in and we have a signal. Now I leave it on soak to see what bugs surface. 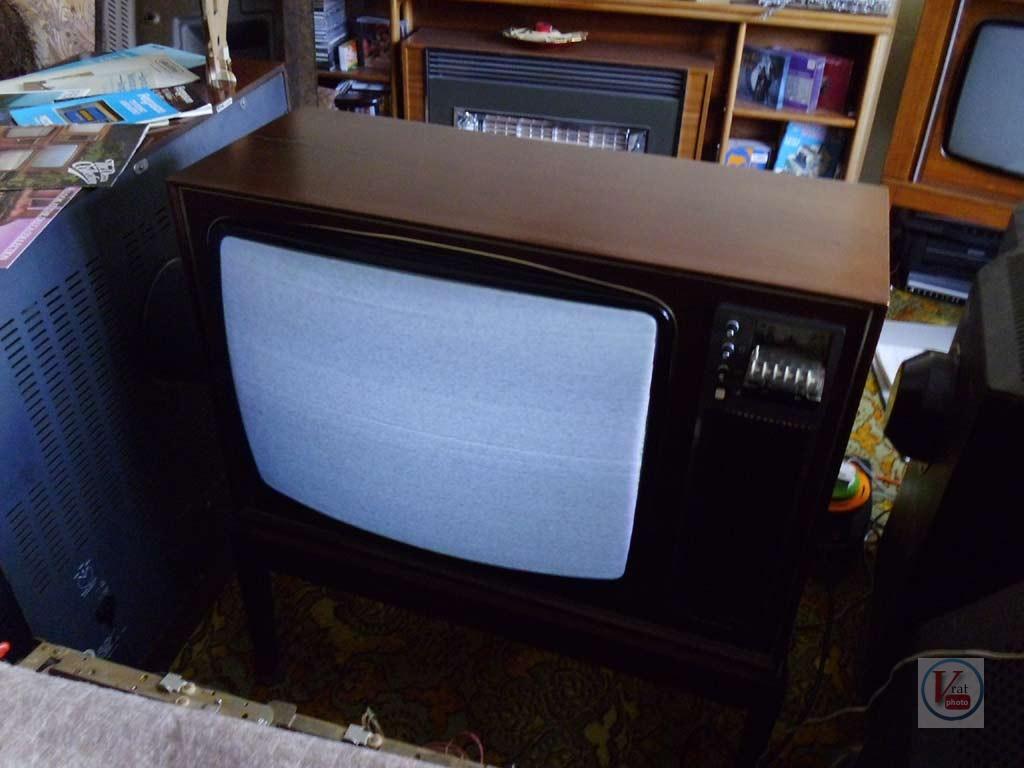 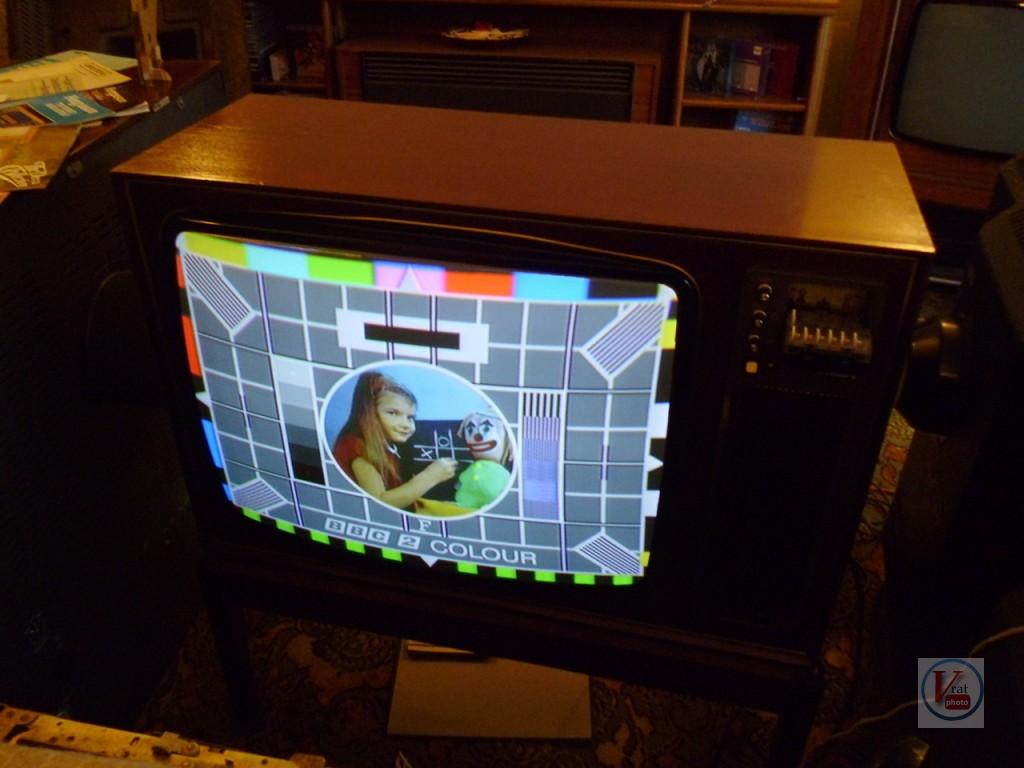 Our G8 was switched on from 9am Saturday morning and not switched off again until the national anthem at ‘close’ around 11pm that night. It did that from 1972 until 1981. What a solid set these were.

In my opinion, the G8 was the best CTV of its generation to be produced by a UK setmaker.

The parents of one of my friends at school had one of these as their main TV until the late 1980s.

I assume this is a later model with a VCR selector button, & 2 labelled ITV rather than ITV 1 & 2.

We had quite a few G8s out on rental in the mid seventies , they seemed to be more reliable than other British makers . But they never came close to the Hitachi CNP 190 /860 ? , one of their first colour set ranges in the UK . We had 18 of those on rental and not one failed or needed adjustment in two years.