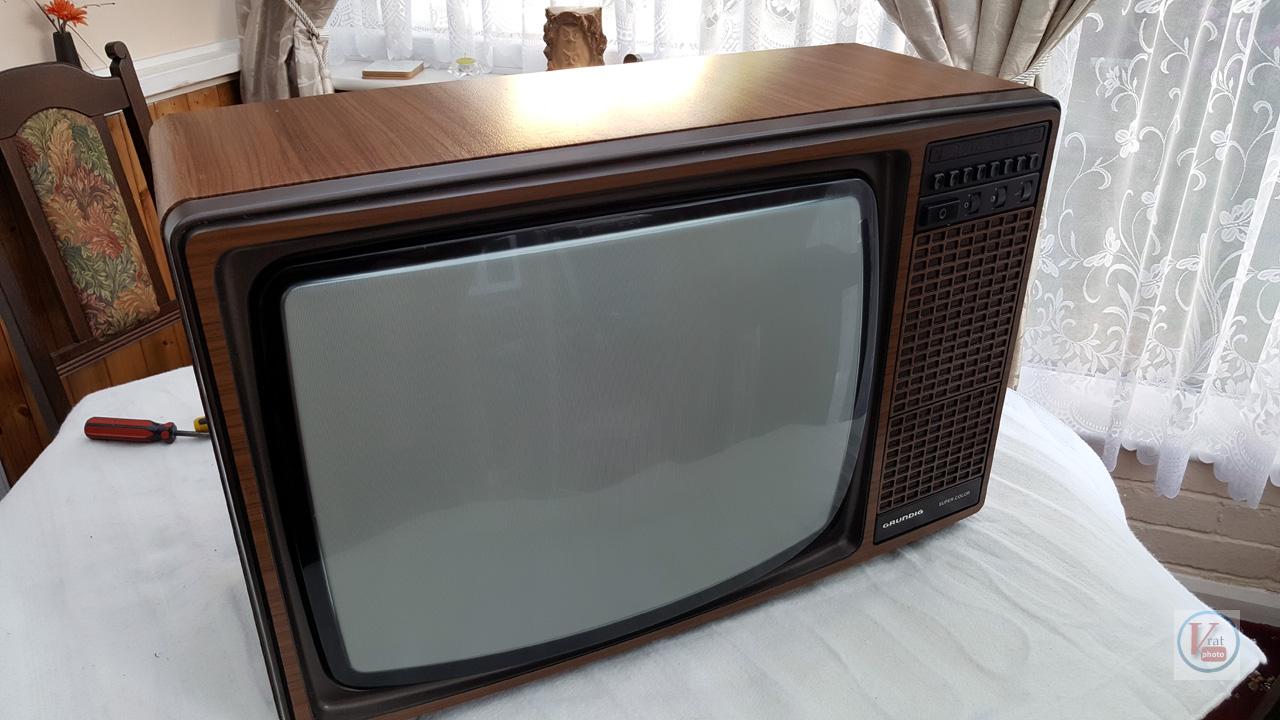 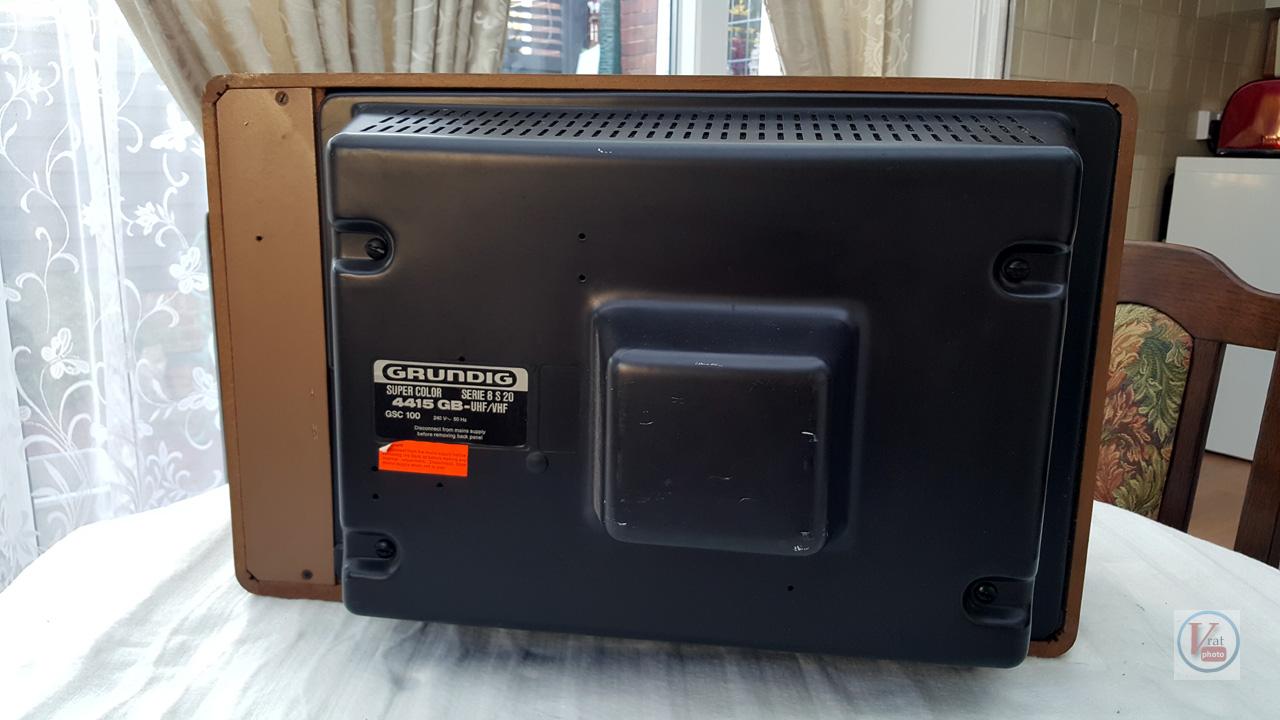 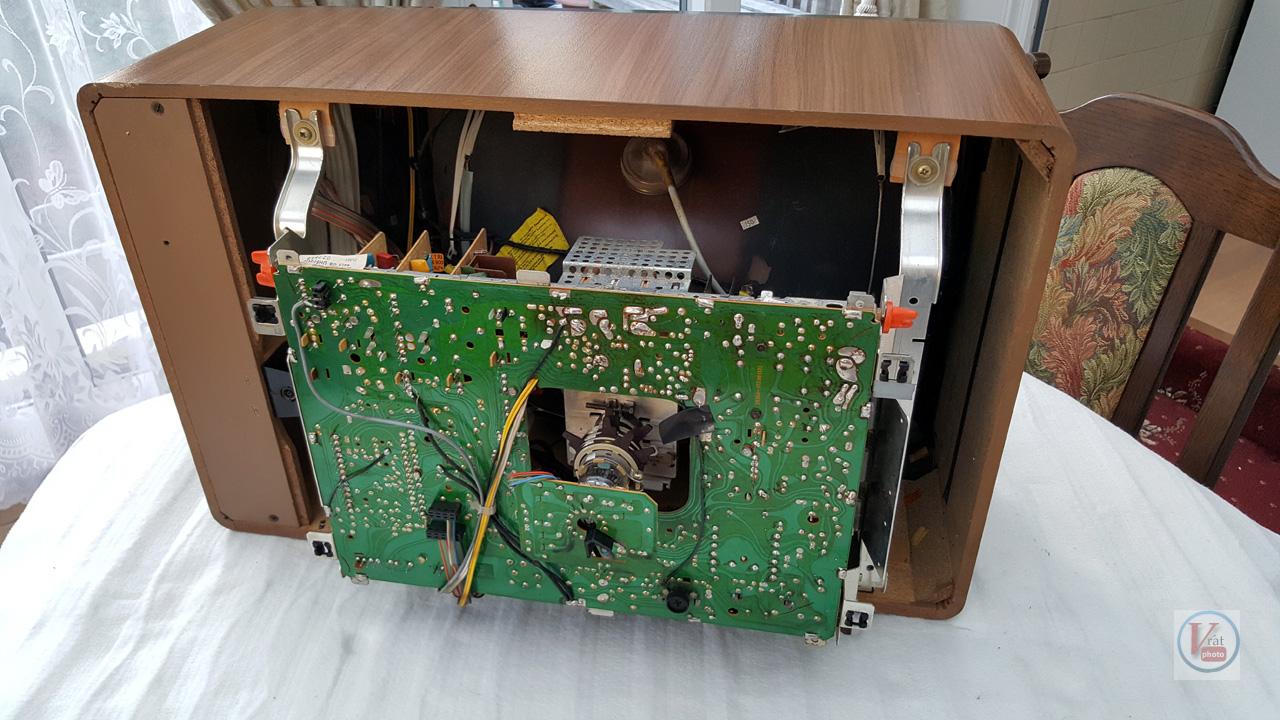 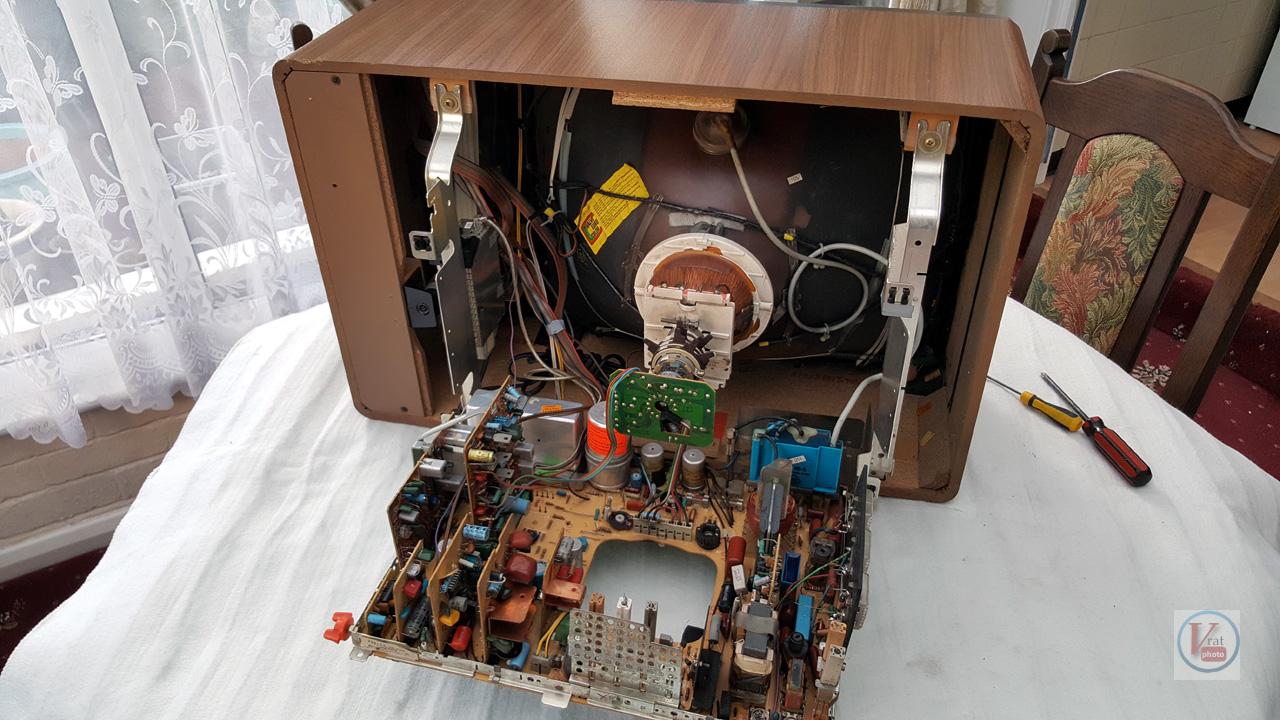 The Grundig has a flat tube. 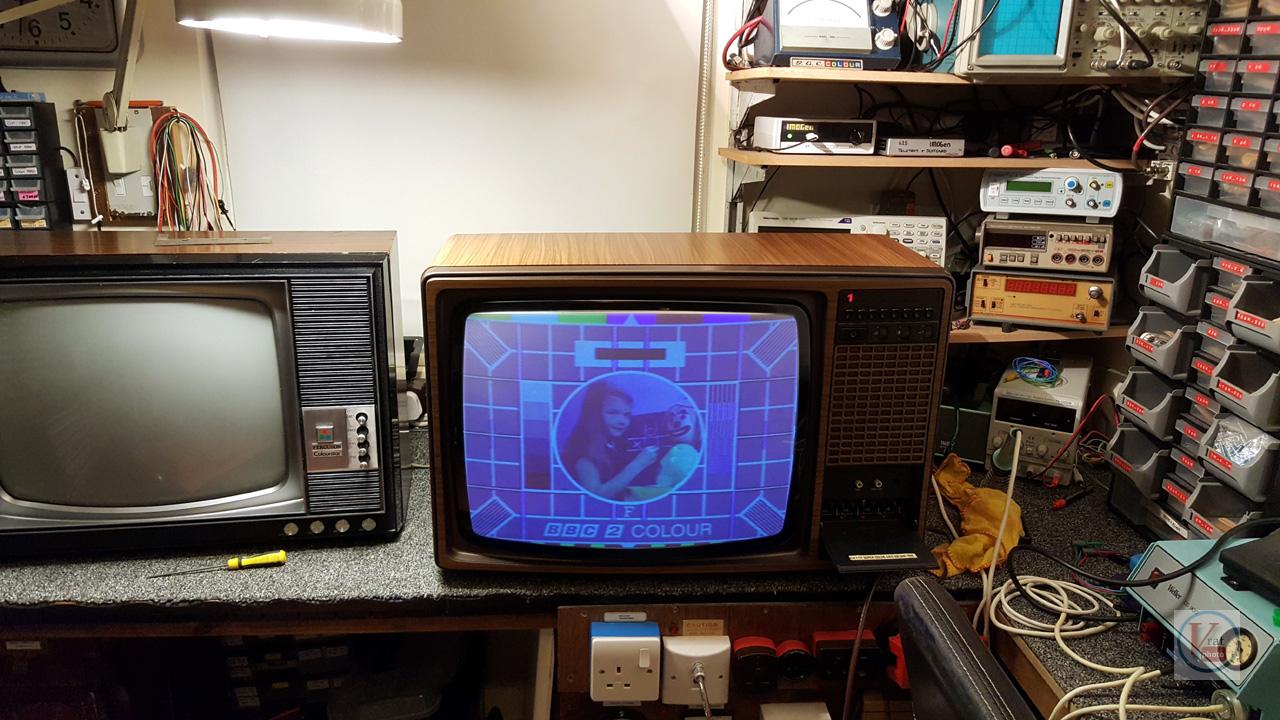 I connected the B&K up to the Grundigs A51-580X and it confirmed what I already knew, that the emission on all three were lo but what It now allowed me to see was to what degree.

Red is dead! Well hardly registering one division in the bad section.

I ran a clean and balance on G & B, this improved the emission reading but still not acceptable, just outside of the yellow region. I then bopped G & B, this brought both guns well into the green, enough I would think going on past experience, to give a reasonable picture.

What to do about Red though. I decided to give it a bop. This lifted it to about 4 divisions into the bad area, I imagine there’s little or no cathode left to recover.

Feeding in a test signal and the picture is marginally improved (see below) but everything is virtually at max contrast and brightness wise. I did wonder about raising the red drive but I’m unfamiliar with the chassis and I seriously doubt it will help all that much. 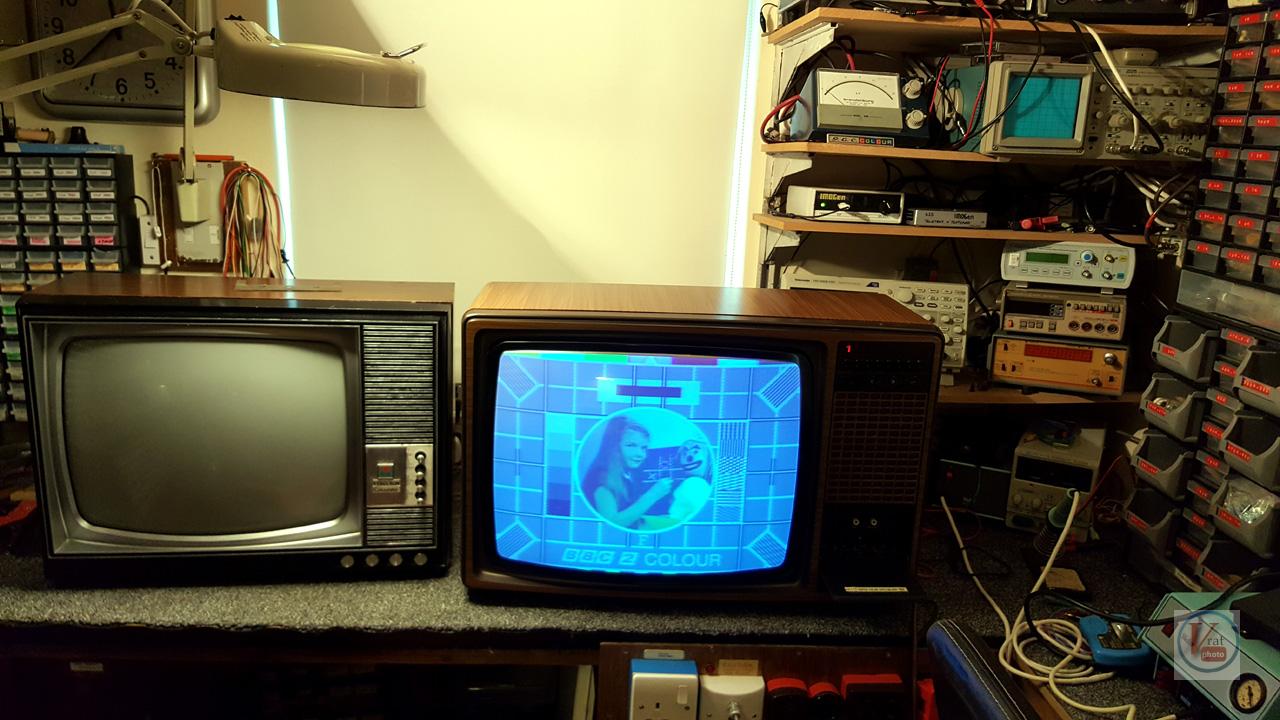 This afternoon I fitted a replacement A51-580X which tested as very good to this rather nice Grundig. The donor CRT came from another identical Grundig 4415, however this other one was lights on but dead, had a seized on/off switch, the cabinet had knocks/veneer chips and generally the chassis in much poorer condition. The tripler looked hideous too so I had no qualms about sacrificing it for the greater good. The boards and other useful parts will go into stock to maintain the one good one. 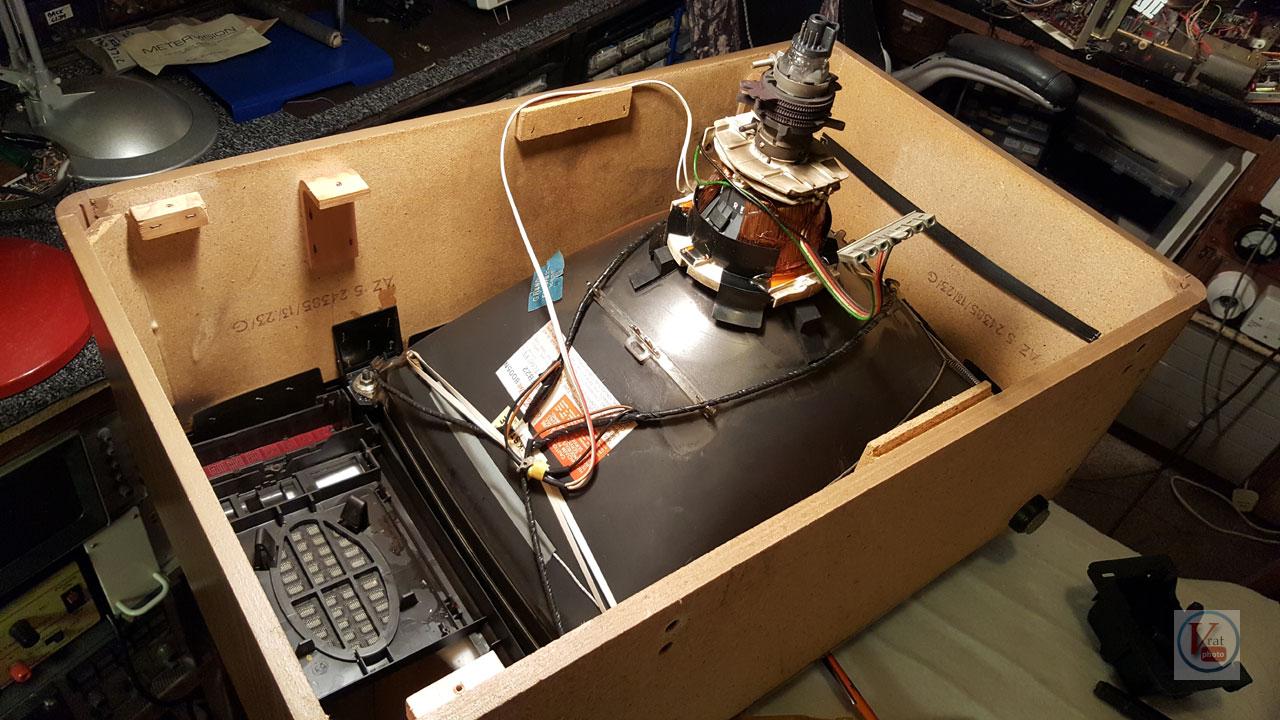 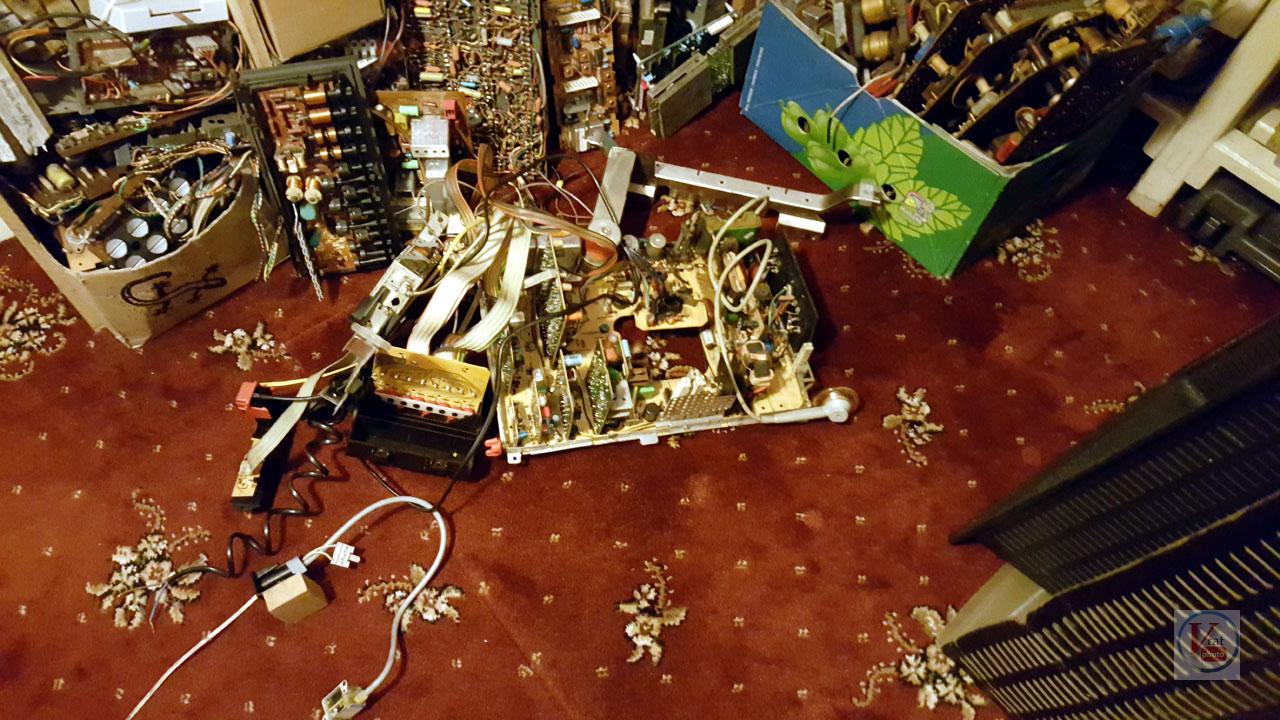 This was quite a task and required the chassis with control gear to be removed, old tired CRT removed, new donor installed and the chassis re-installed. Once done and checks that everything was connected correctly power was applied. I was greeted with a lovely bright Test Card F with excellent grey-scale, then within about 10-20 seconds Red becomes very prominent. 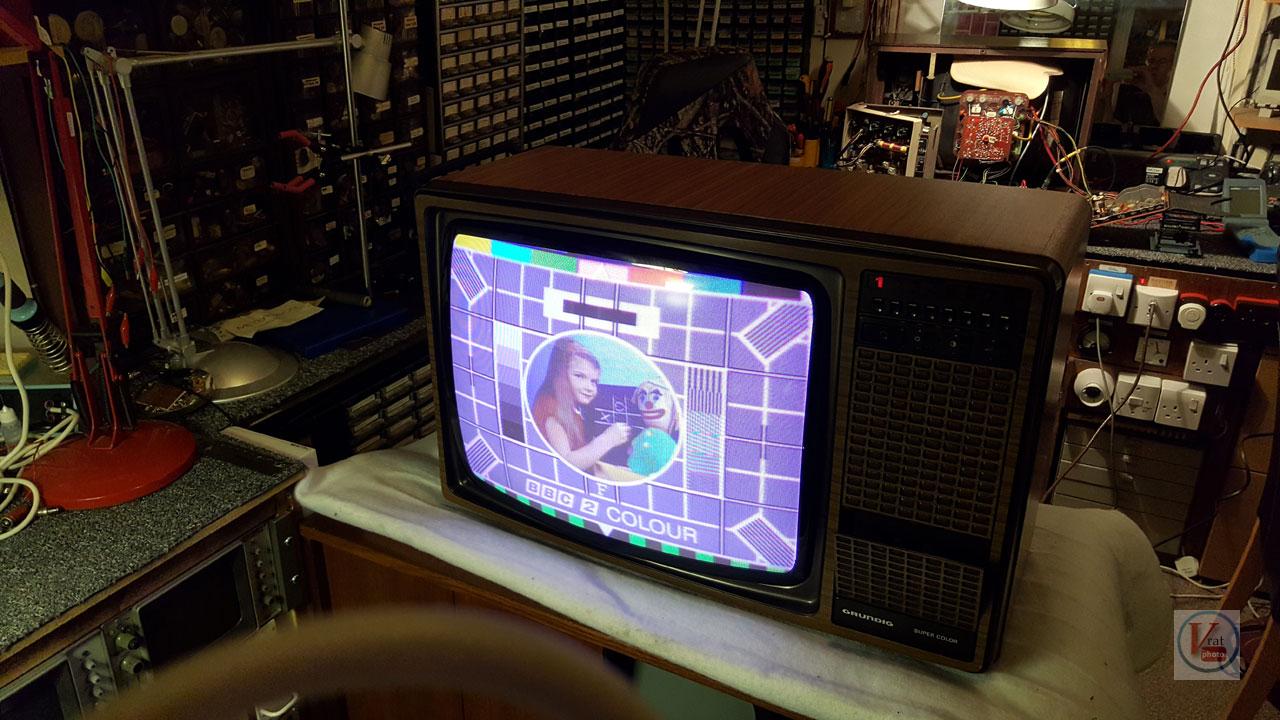 Now if you remember the old CRT when tested on the B&K, the red gun was totally worn out, hardly any emission left. I suspect that a previous service engineer has increased red drive to compensate or has added or removed some components to achieve the same effect.

Trouble is I don’t have the circuit for this, though I’ve yet to check my Red books. Looking at the video module its not obvious how you would adjust the drive to RGB so its going to take some figuring out. I really need to find the service manual or some data.

Still at least I now have a set with a nice strong CRT, just need to figure out this red drive issue . 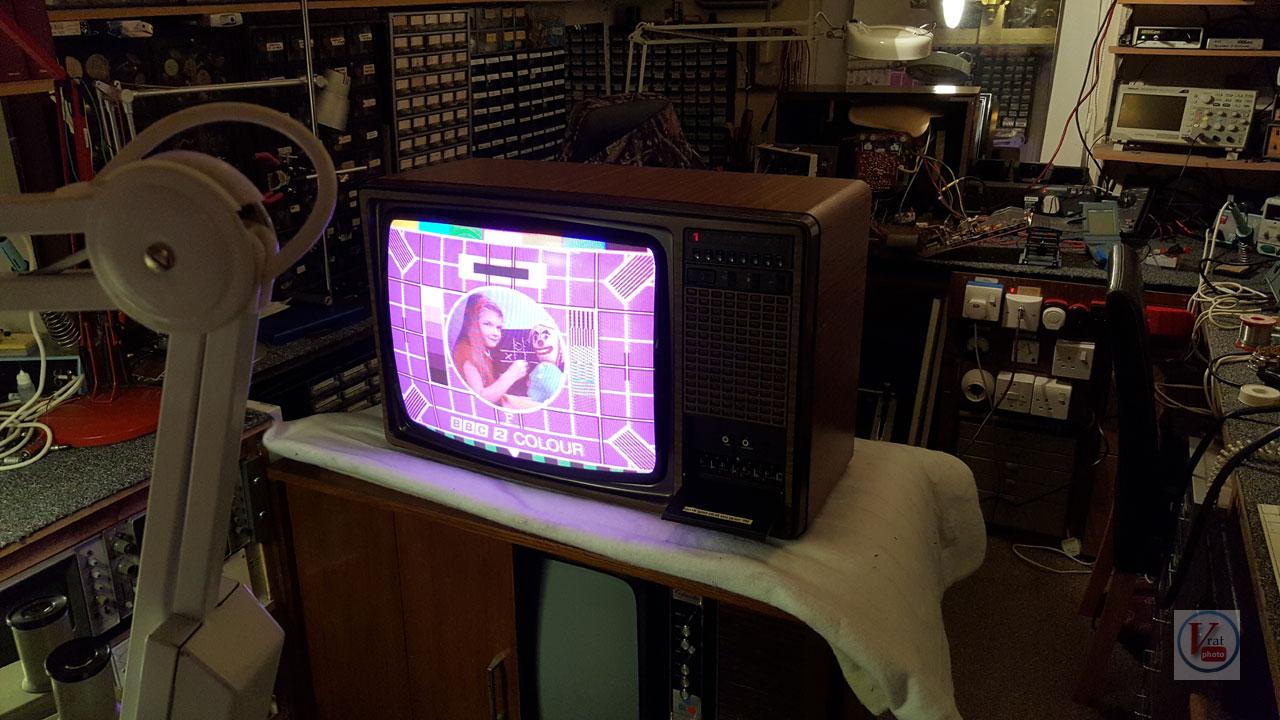 Well the data is not in my red books which cease at 1982, however forum member “Cathovisor” located the service manual on  e-bay Germany so I’ve purchased it. Despite not being able to read a word of German, I should be able to at least figure how the A1’s are driven. 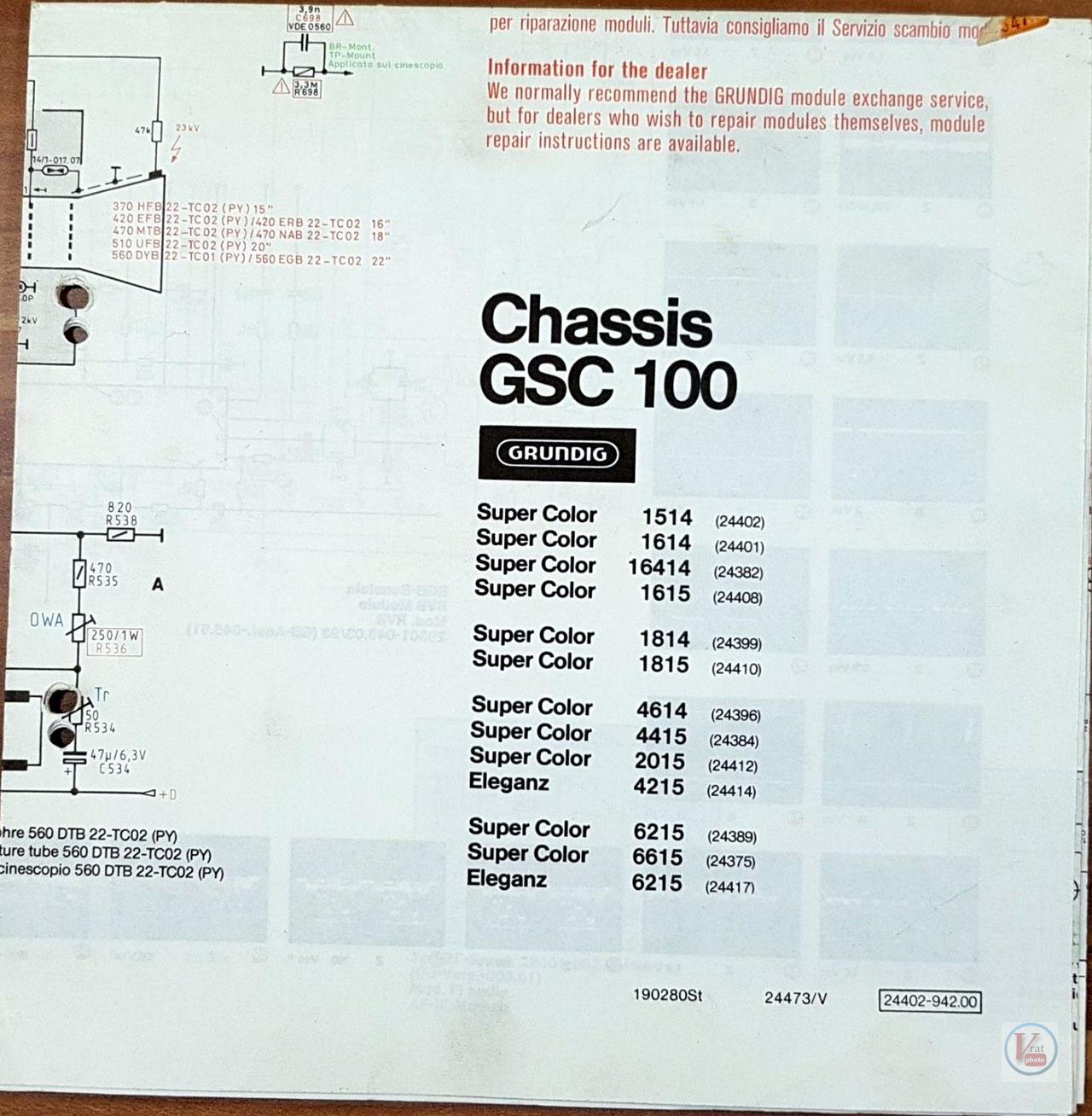 I swapped over the other now spare RGB board and that has improved things a little but one discovery I’ve made is I have a shed load of brightness at my disposal. So much so that the brightness is way down, if I increase it the screen whites out and sort of pulses I think the beam current trouble as a result. 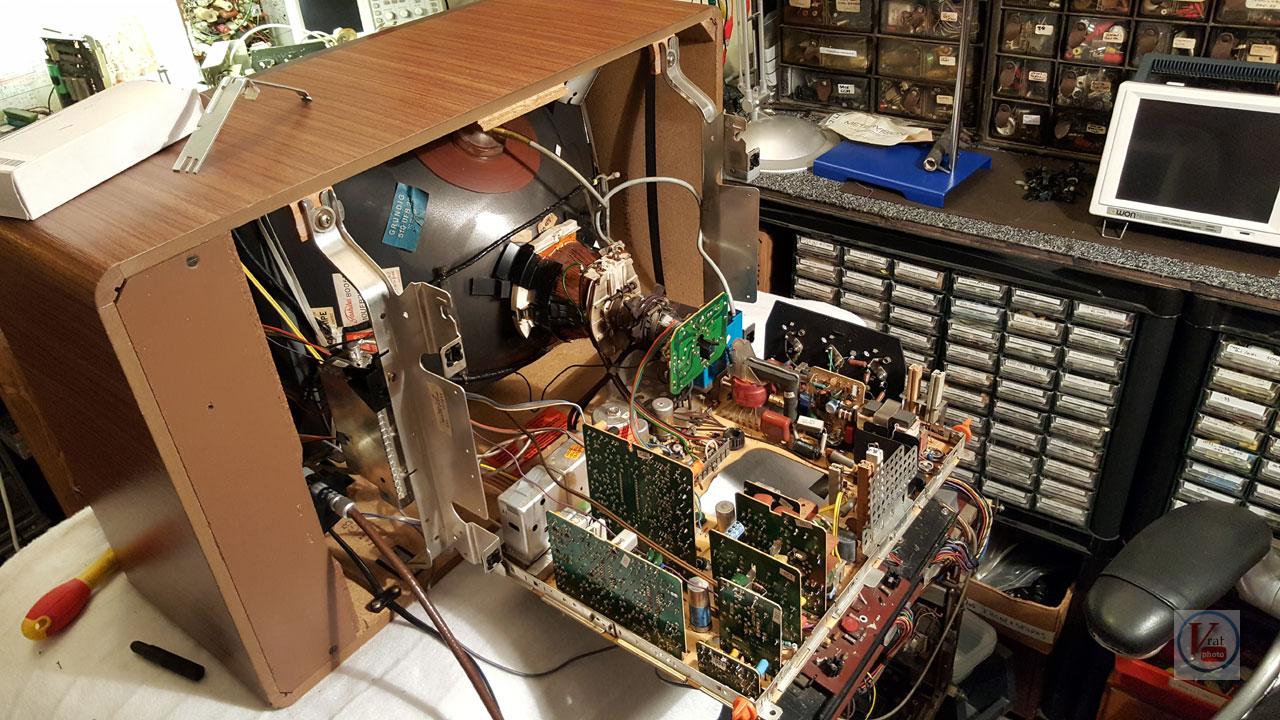 This morning with a fresh mind I studied the board and figured out how you grey-scale and set the drive bias. Its a combination of R547 on the main PCB and R1911, R1931 on the RGB module. Get it right in Black and White. As I suspected the biasing had been adjusted to compensate for the old tubes failing Red gun, readjusting has returned the raster to correct levels. 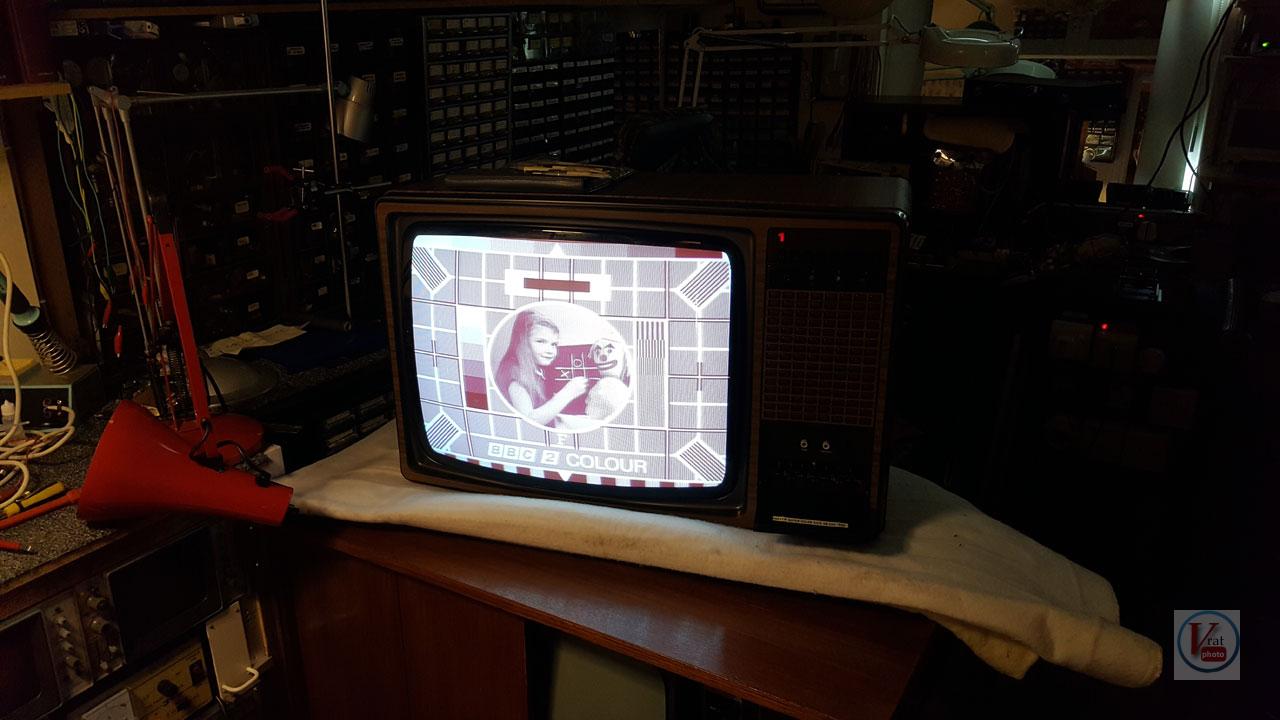 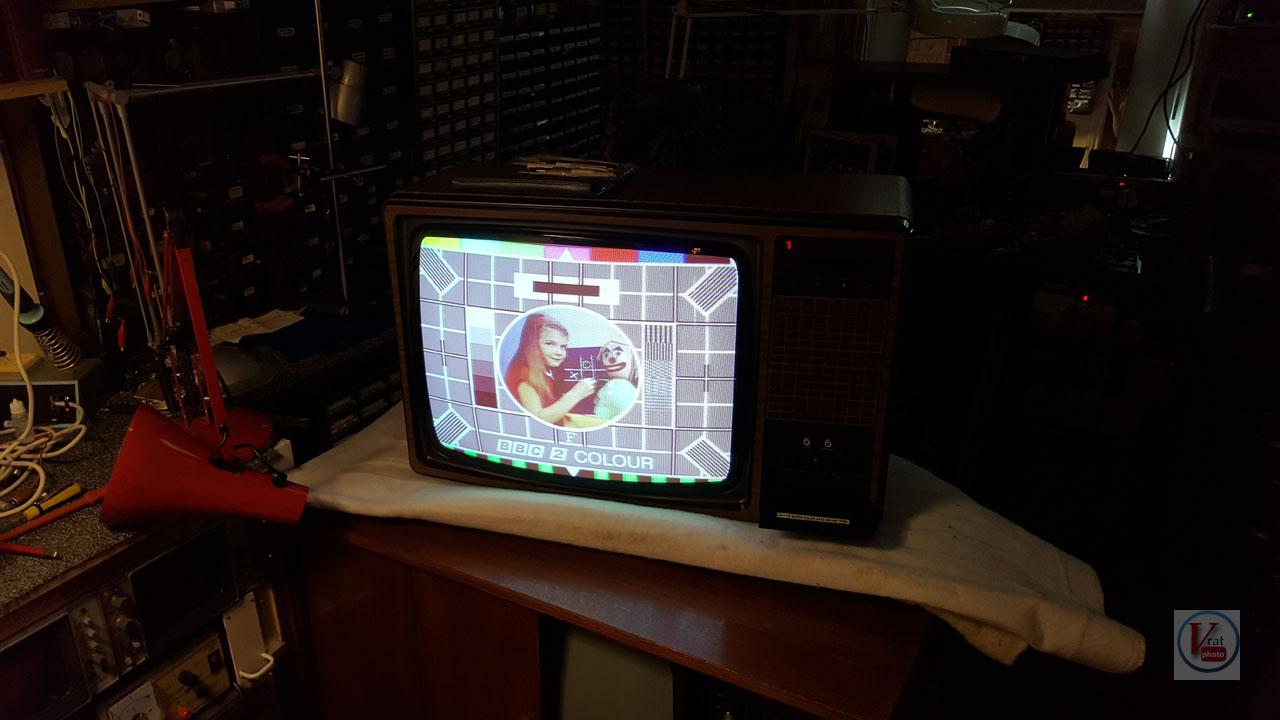 The old Valvo CRT was quietly taken to the CRT disposal booth and respectfully put down to air. RIP. 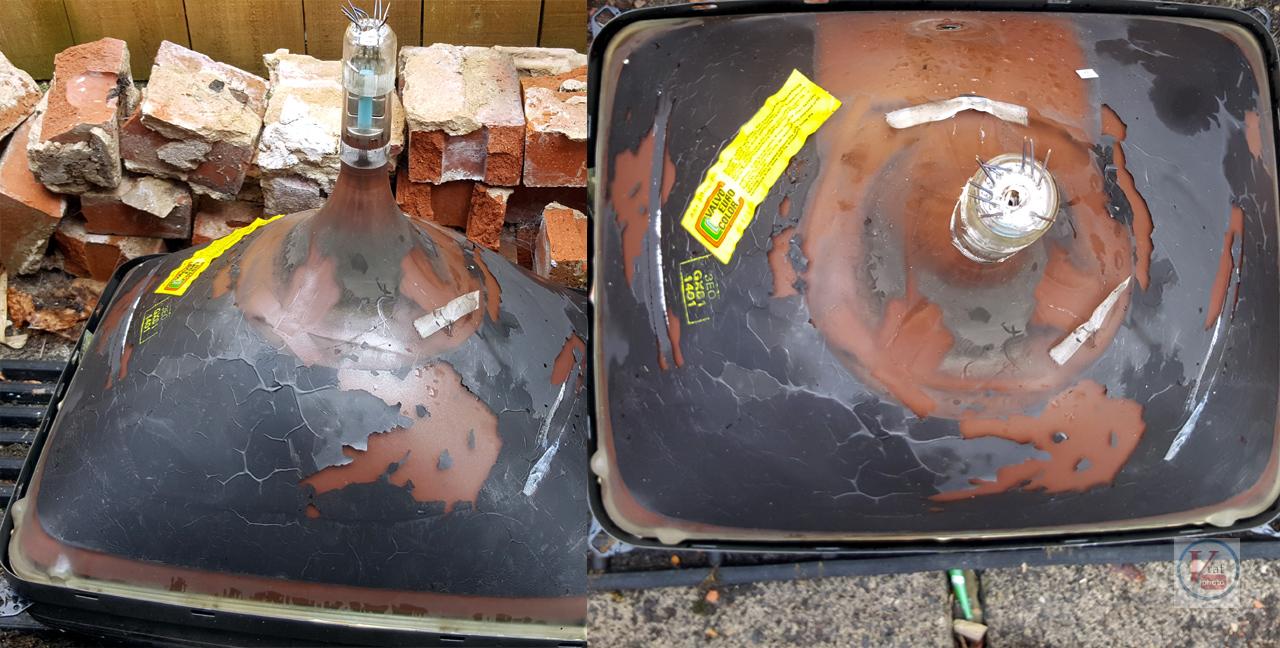 I don’t know these Grundigs at all but it was common on later colour sets to have auto greyscale. This may be one of those where there is no physical drive set-up. Basically the system works by monitoring the beam current from each gun and the resultant voltages are fed back to the drive chip which adjusts the drive to each gun accordingly. In this way the greyscale is maintained over the life of the CRT. If any of the guns went really flat, there was the usual predominance of the other colours accompanied with flyback lines from the flat gun which by then was being driven to maximum. Some sets blanked the picture completely if the tube was getting really flat (some Philips sets did) and you could sometimes just tweak the A1 drive pot on the LOPT to get a picture back that was probably just about watchable but with a predominance of one colour in the background with flyback lines in the colour of the duff gun giving a red green or blue ‘cast’ over the whole screen.

Hi Rich I wasn’t aware of that fact, been playing with old school sets up until now. It will be interesting to see once I have the service manual.

I’m sure I have some odd fault though as things have improved a little with the swapping of the video module. The fault is hard to describe but if we take brightness on a scale of 1 – 10 mine has to be set at about 2 even then the picture is very bright. The next is hard to describe but as I increase brightness the screen gets extremely bright even just at say 6. As I progress up towards 8-ish the screen flashes, I thought I had caused a field collapse as it sort of bounced the raster and made a static sound and I observed a beam like fold-over come down the very white raster. Backing off the brightness slowly backwards and you start to see a washed out TCF once again. Getting back to the lower brightness setting and you have the example as shown above.

Probably easier to video than describe but I’m not sure it will video well due to the intense brightness, I’ll have a go though.

Have a look and see if there is an A1 (G2) adjusting pot. Someone may have turned this up to try and compensate for the duff CRT so now it might just need turning back. There is usually a correct way of setting it up like collapsing the frame and then backing off the A1 control until you can just see the line…..it’s all so long ago now….! Without the correct information I’d set the brightness to about half way and back the pot off until the scan lines just disappear in the black parts of the testcard (black-level). Hopefully that will do until the correct info becomes available.

I sussed it see above photos 🙂