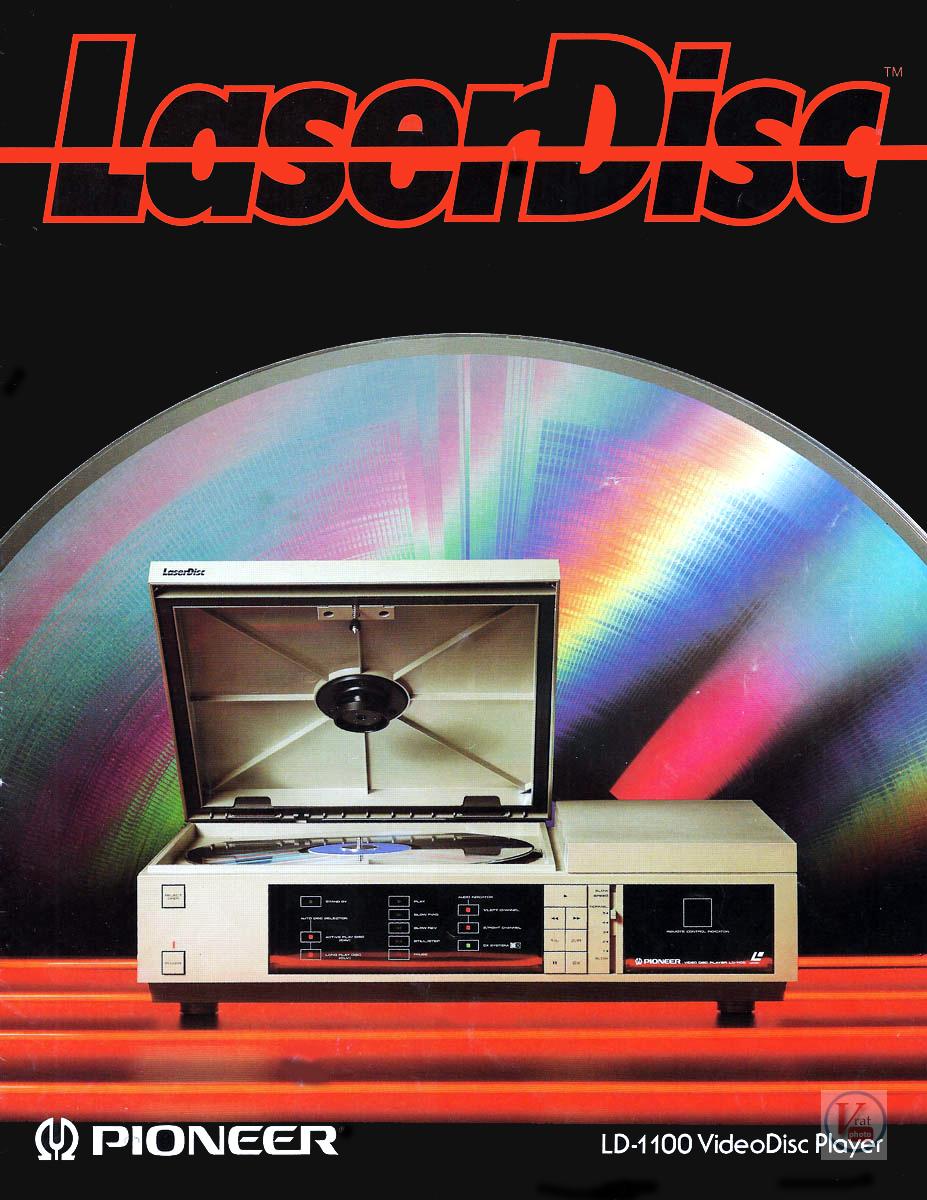 Pioneer’s LD-1100 LaserDisc player was introduced in early 1982, just as the company took over from MCA and IBM the reins of disc replication in the U.S. The LD-1100 can truly be considered a second generation player despite looking very much like a 1st gen.

It still uses a gas charged laser, in addition to being the first player to have built-in CX decoding, Pioneer’s LD-1100 incorporated several improvements over its VP-1000 model, including a better laser tracking assembly, variable gain in the tangential mirror and a laser that only burned, when actually playing a disc.

Internally it’s much simpler than the Philips VLP600, with just one main board containing all the electronics, none of the vast array of plug-in modules which are so characteristic of Philips products of the time. 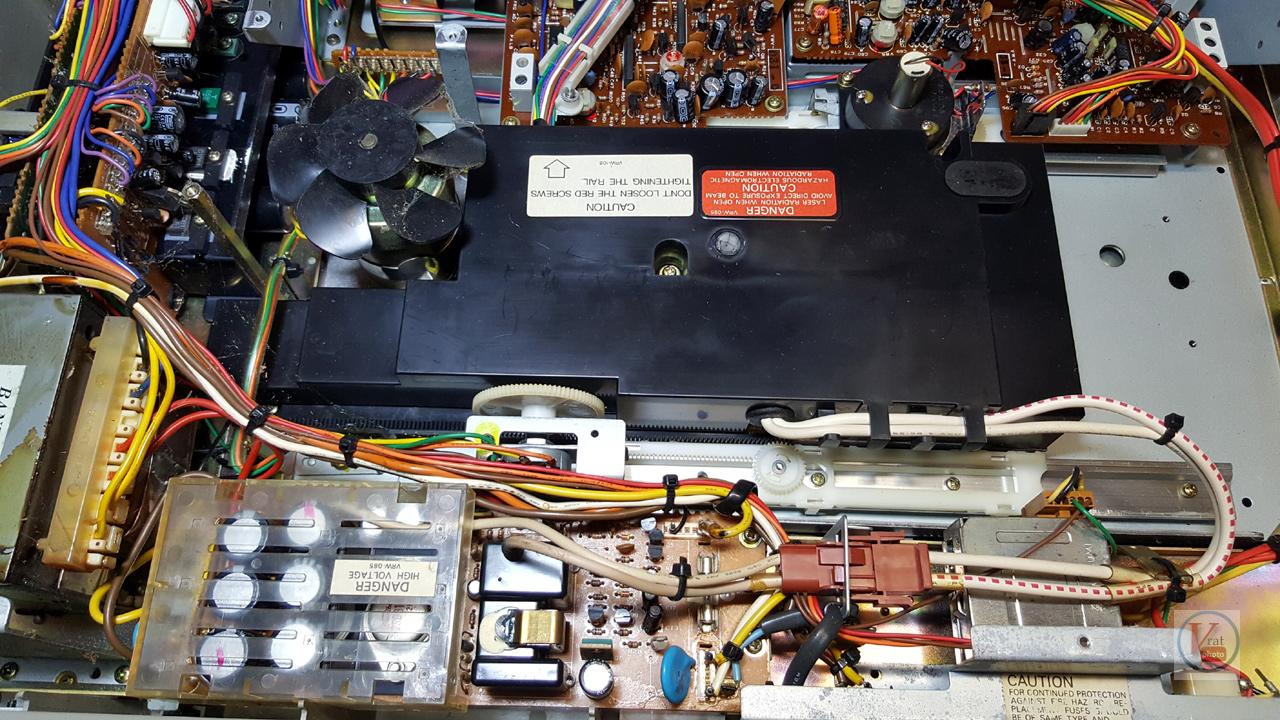 As mentioned above they used a Helium-Neon gas laser tube much as you would expect for this early laser player. The optical platform can be clearly seen in this picture: the laser beam emerges from the tube (top left), and is reflected by two 90-degree mirrors before entering the focusing and tracking module (bottom).

The whole optical platform moves as the disc is played, which makes it simpler to keep everything in precise alignment; the white rack and drive motor can be seen at the bottom left. The fan is mounted on the disc-drive motor.

The pioneer laserdisc player arrived very well boxed and padded so it survived the trip from Devon. The player was outwardly very mucky and looked like it has been splashed with a lot of plaster, that pinky coloured mud. Thankfully this was only surface and the player cleaned up very well. Nothing had made it inside and all that was found were a few cobwebs and not too much dust. The two perspex covers are missing from the front displays, I’ve ordered up some replacements having them custom made from http://www.plasticsheets.com/ cut polished and deliver for just over £10.

Unlike all the Philips  I’ve encountered thus far from this period, the LD-1100 does not present “sticky belt syndrome” as uses direct drive. The mains cable has been snipped which is expected as it came from a recycling centre. Next steps will be to do some preliminary checks on the PSU and protection fuses, then consideration as to the best approach to power up.

For now some photo’s after initial clean 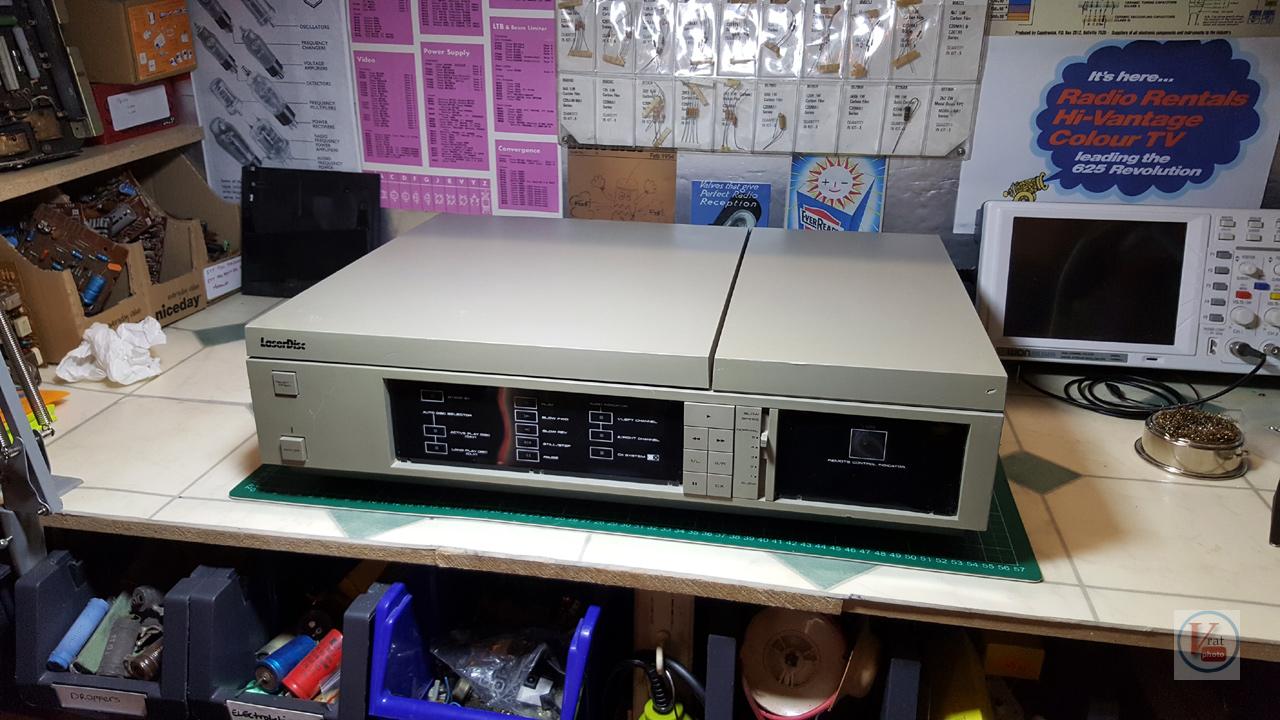 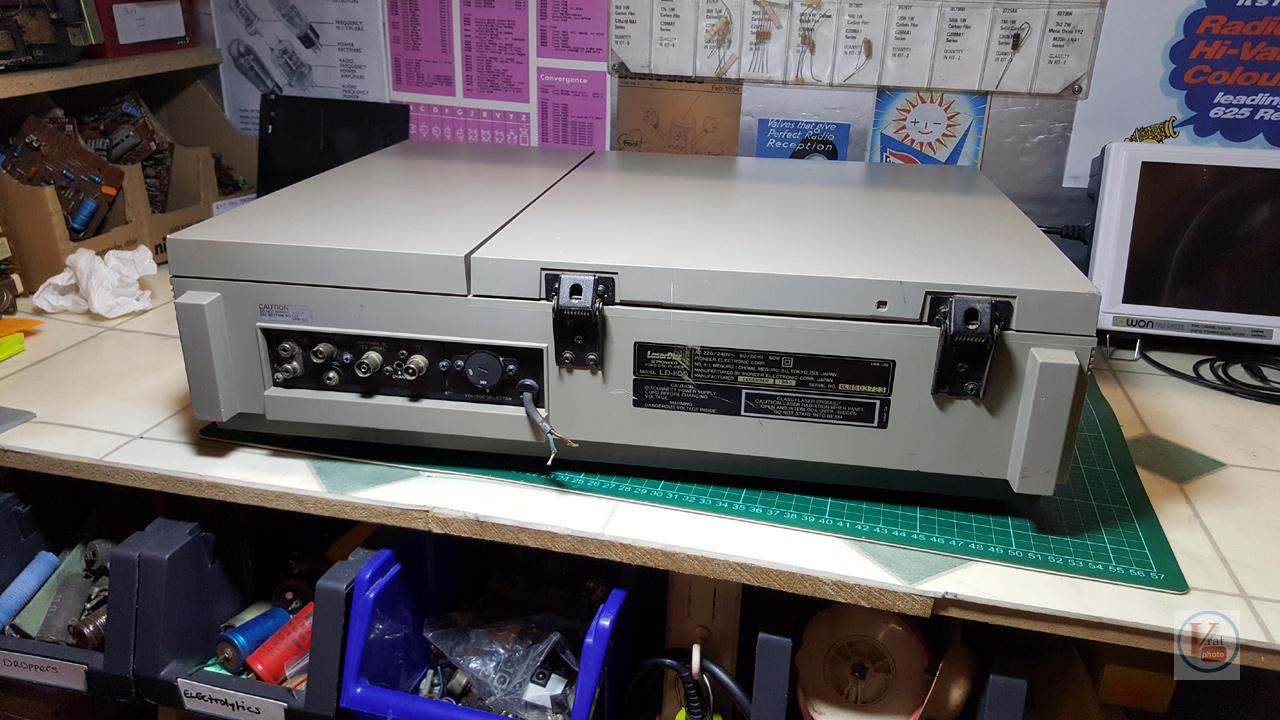 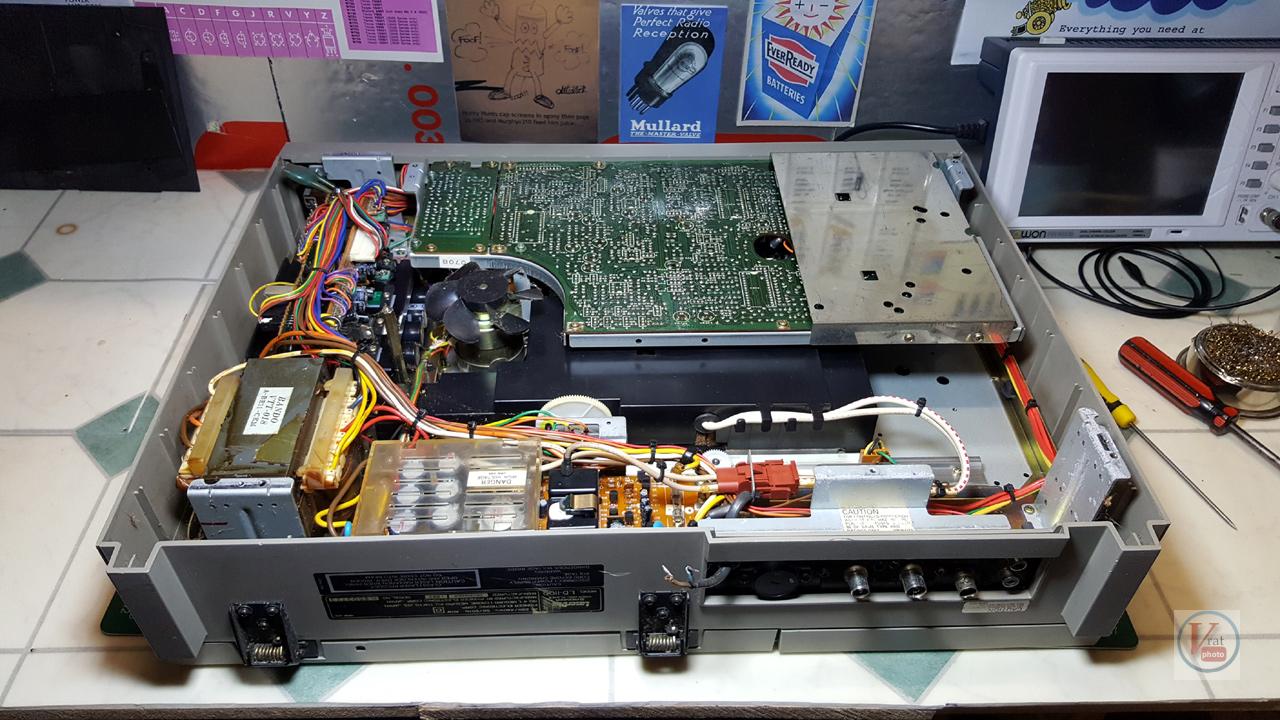 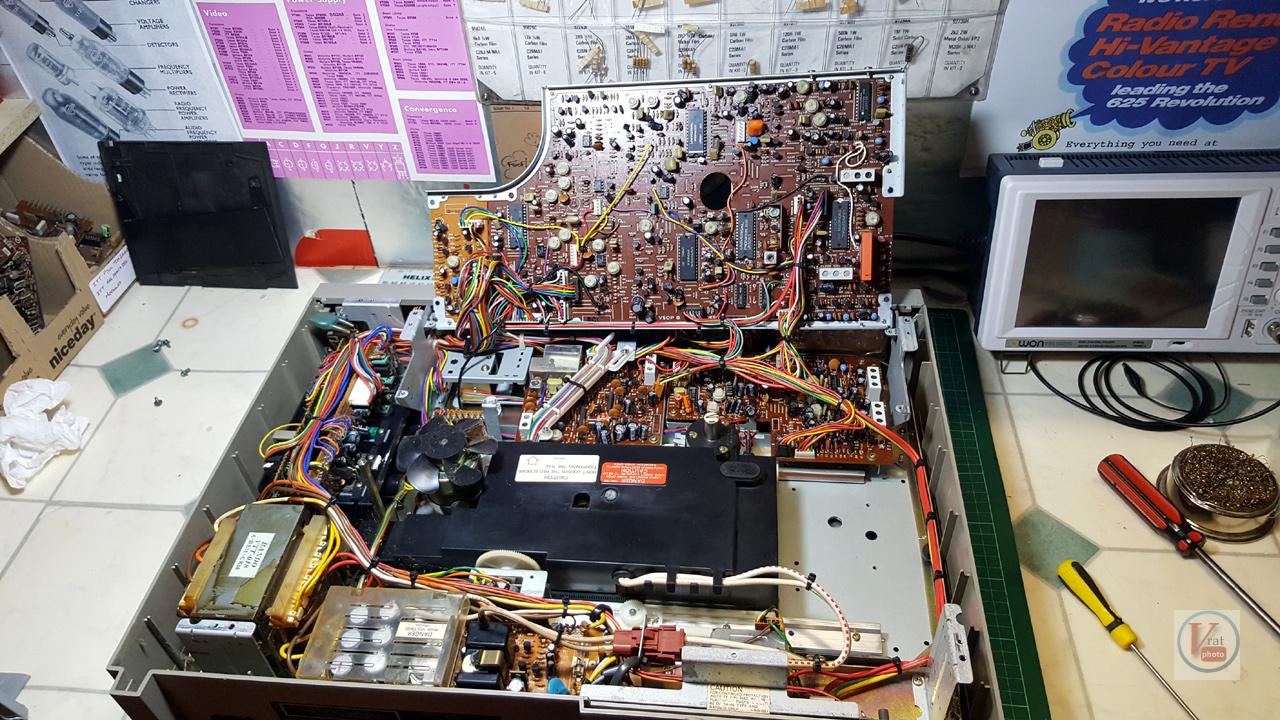 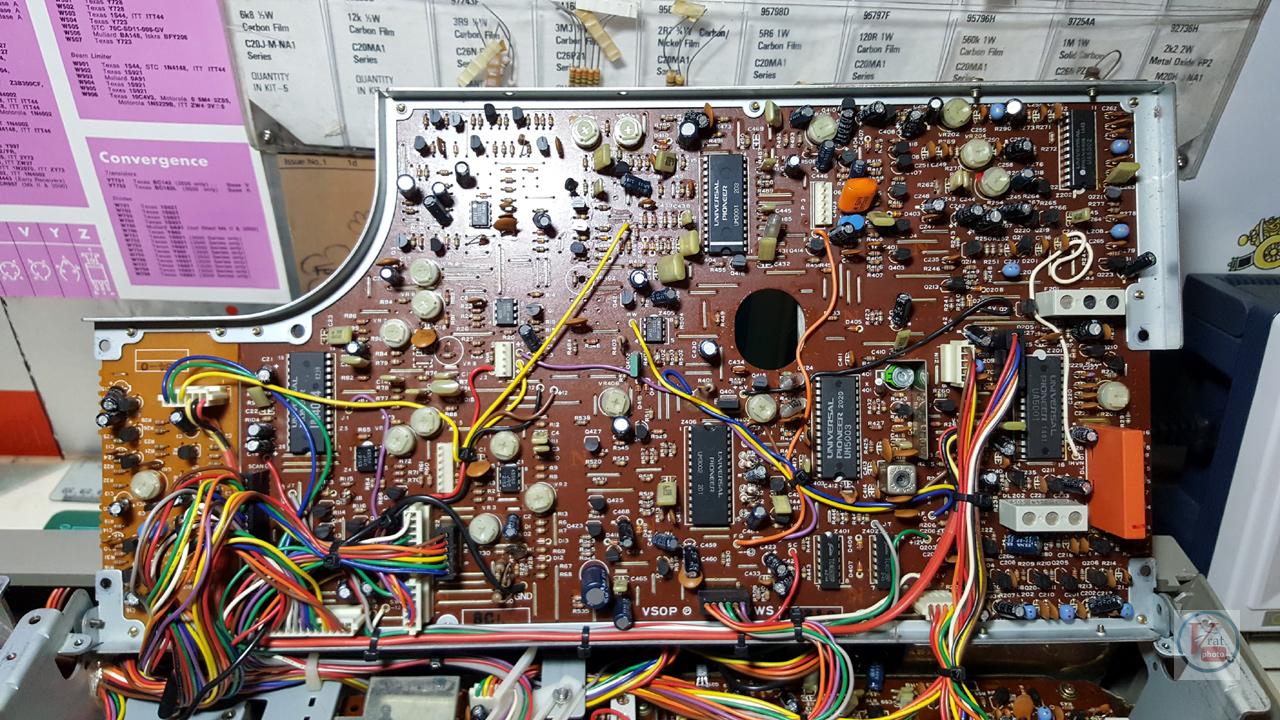 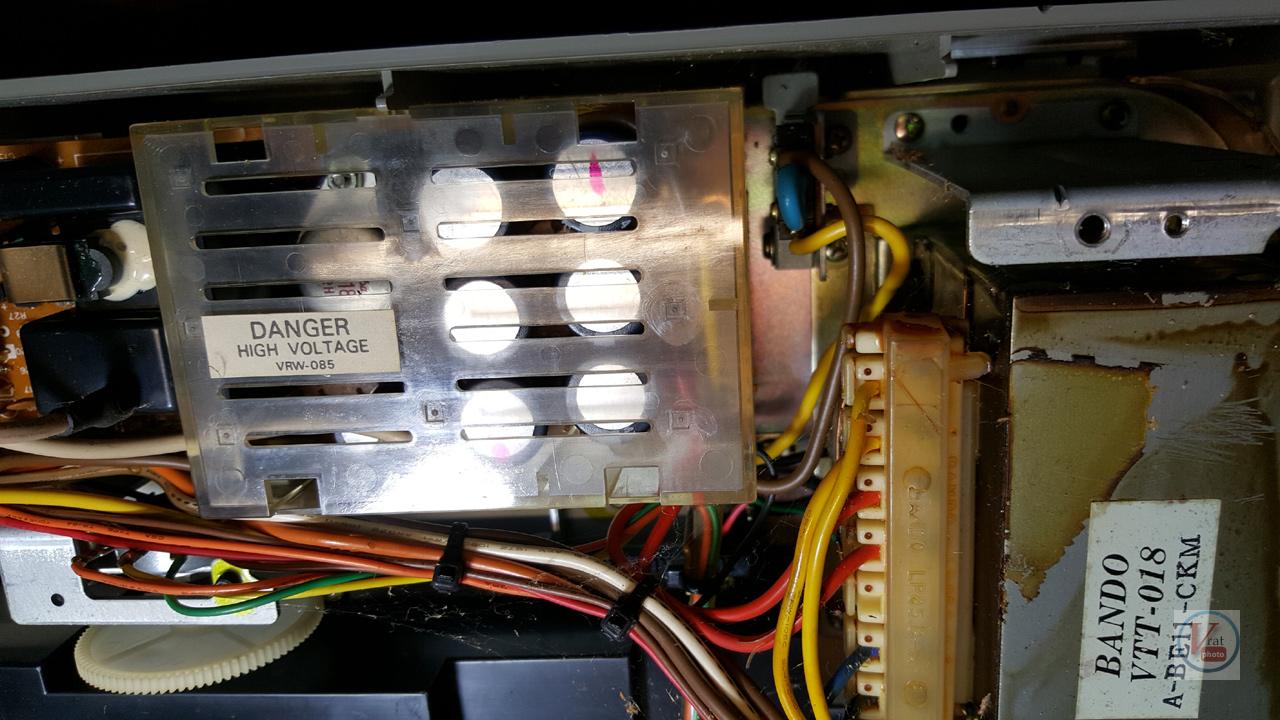 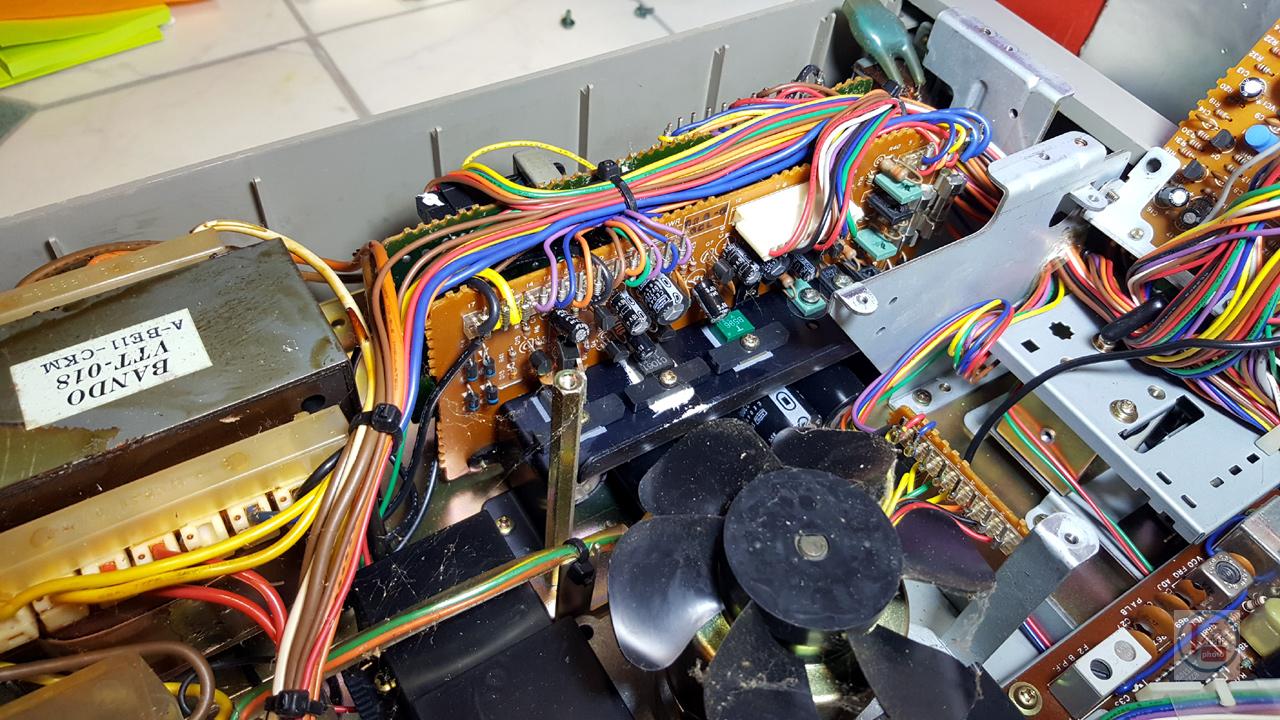 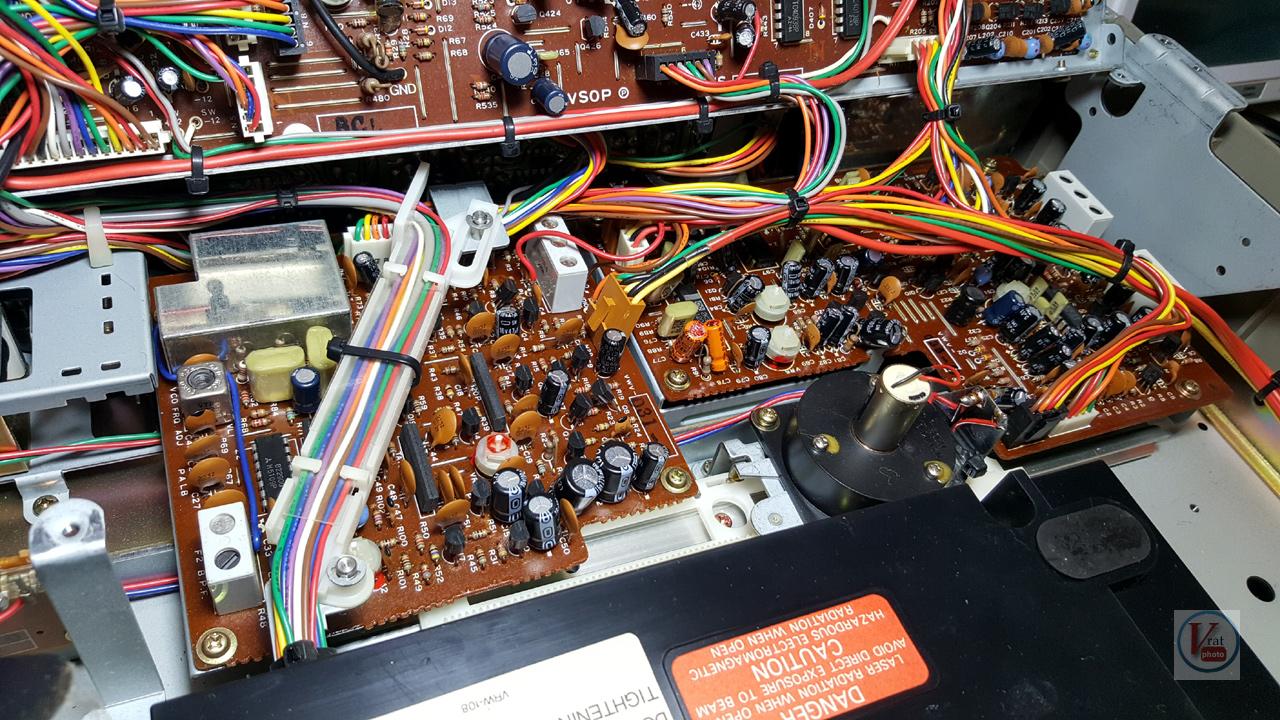 Power applied and no dramatics or magic smoke escaping. I could hear the laser sled returning to the home position, once there I could now open the door interlock and raise the lid. Connected up to the TV and tuned the receiver to the Laserdisc player. Inserted a disc, closed lid and pressed play. Pressing play lit up the play indicator lamp on the front display there was a flash on screen and an audible thump thump from the player.

I overrode the interlock and with the disc removed pressed play, the thump thump is the Objective lens moving up and down. I can also see the laser beam is activated, both these are good signs. However the main fault seems to be no platter drive spin-up,  time to investigate why. Starting point will be to understand what the process of start up should be and the motor/servo drive circuit (SPDL motor) and why it is not spinning up. There is 19V at the motor and I note when powered up and down the motor does jiggle. 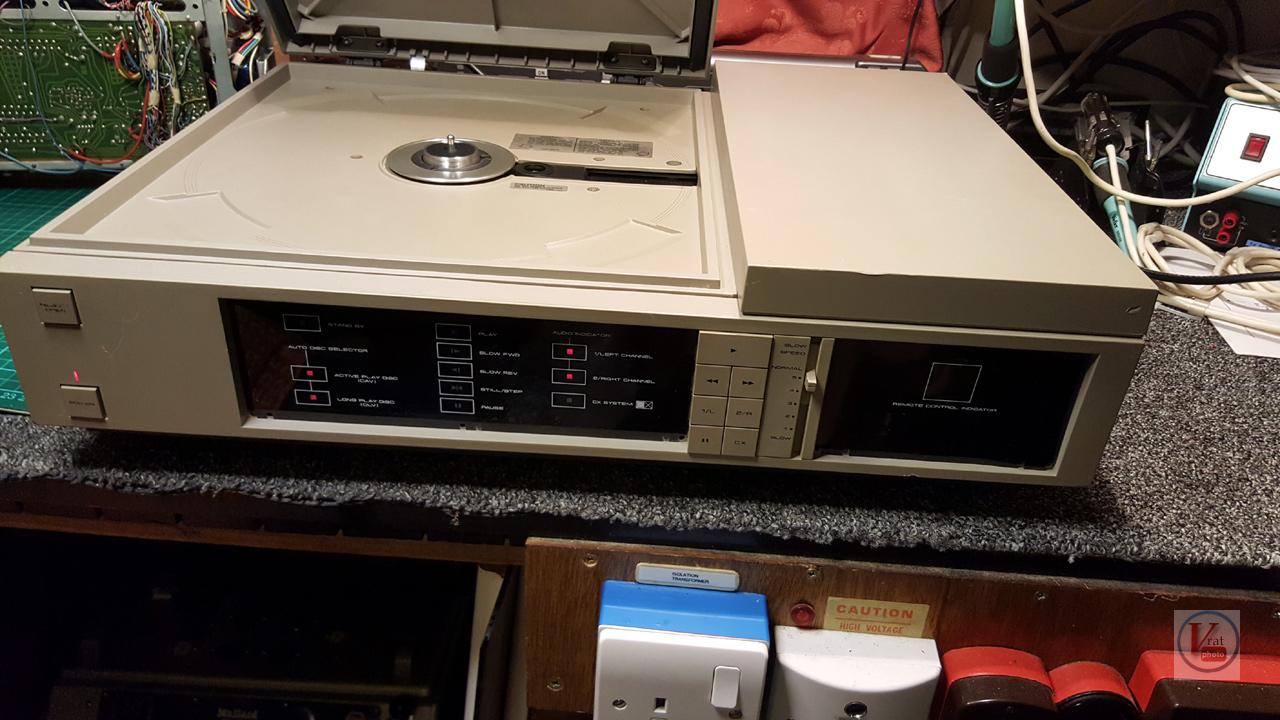 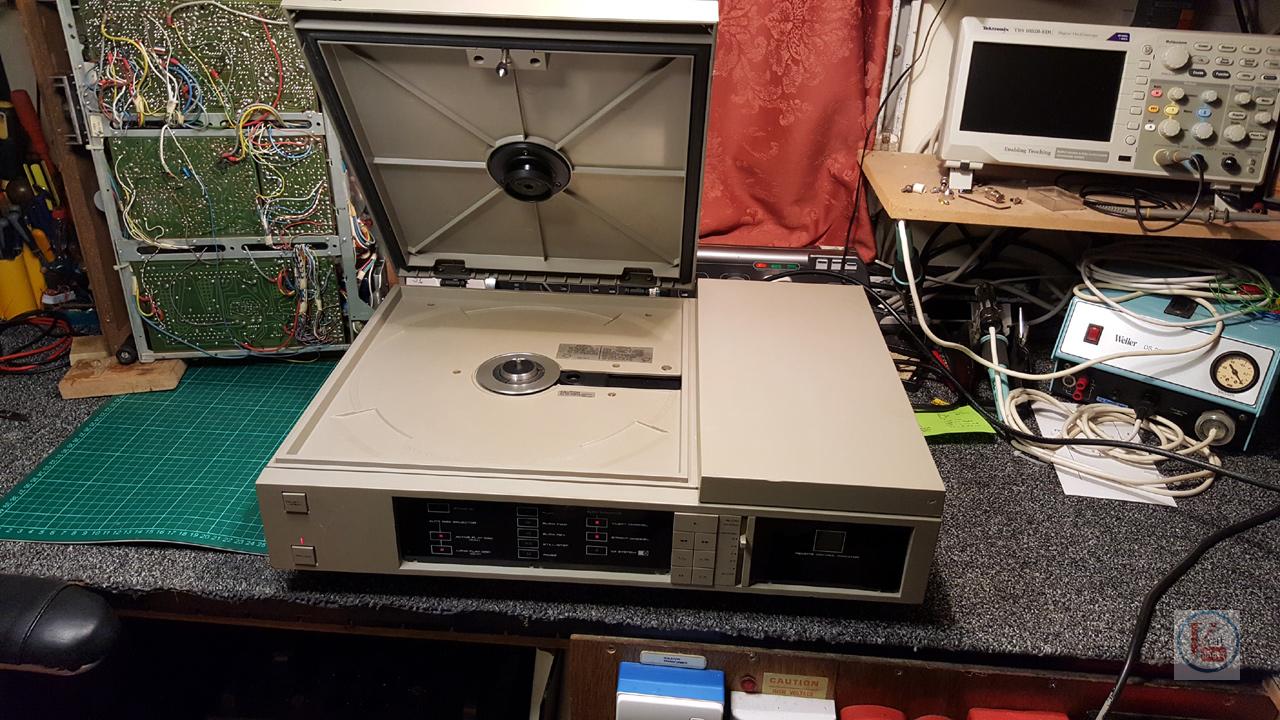 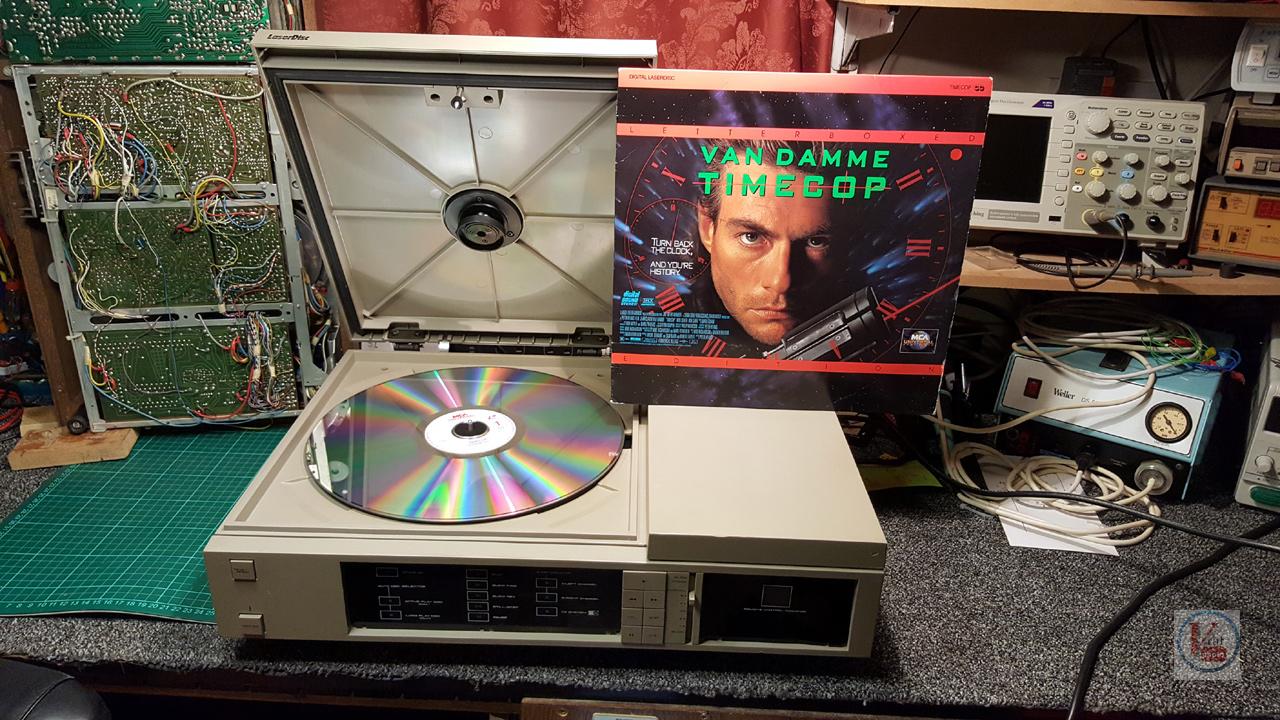 I’ve purchase the correct LD1100 service data and a dealer fault guide both will be essential in assisting me with this repair. They are both very comprehensive manuals covering both PAL and NTSC versions of the LD1100. Lots of stock faults and service guide steps with a similar flow chart style to fault finding that Thorn produced. I spotted the fault listed I have with the SPDL motor detailed, so fingers crossed when it arrives it will get me started on that fault and cover any other fur-balls the LD1100 coughs up

Whilst scanning the service manual I came to the Focus servo section and it states that when starting, the objective lens is first raised (focus on command from the cont board)  to a position where the focus servo can be applied and once it has been properly focused “in focus”, the focus servo loop is closed and a “focus lock” command output is sent to the cont board. The focus servo is thus set to normal operating status, but if proper focussing cannot be achieved within 1 sec after application of the “focus on” command, this command signal will be stopped temporarily and the focussing operation retried 4 times. This is the light thumping sound I heard and the observation I made of the objective lens bopping up and down.  At which point if it still cannot lock the focus servo mechanism, the player is switched automatically to reject mode.  Also some worry info found about possible duff SPDL motor. Anyway no point jumping to conclusions, this is my start point and I need to check all the reference high and low voltages and the expected waveforms. 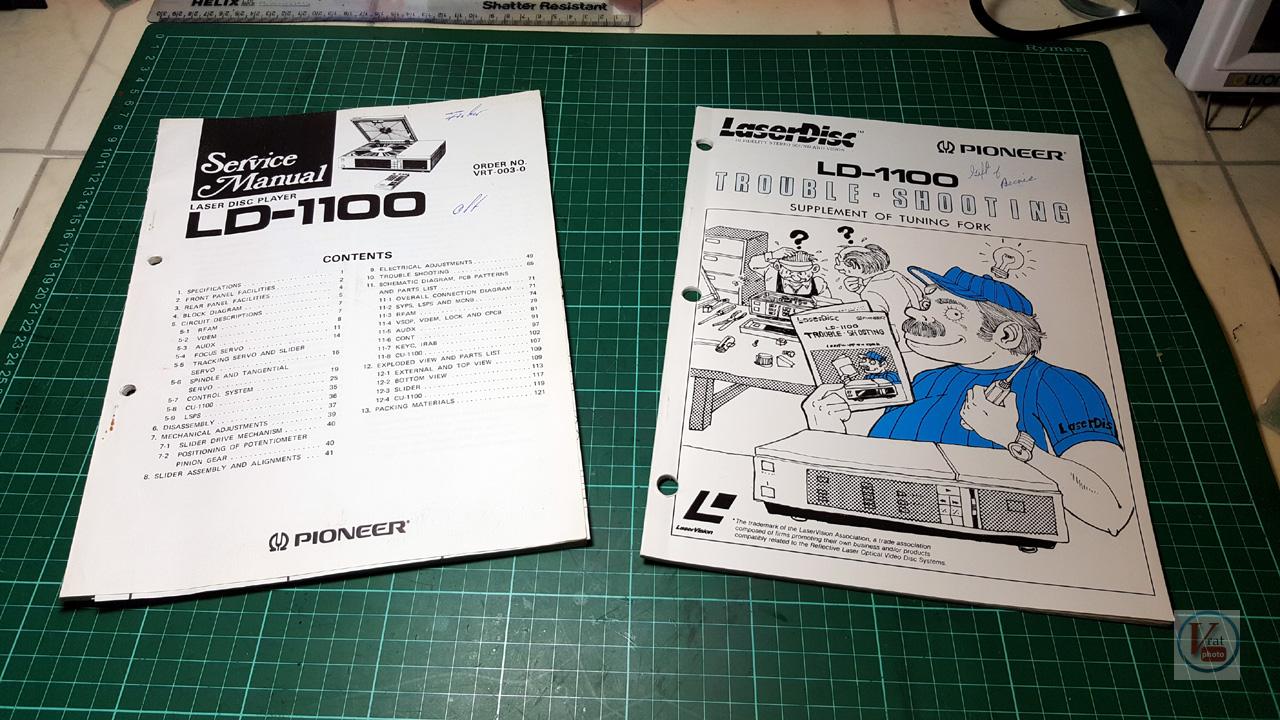 Feel free to post comments or advice below, otherwise these comments of mine serve purely as a diary log for me to refer back to.

This is going to be fun! not used to all this “L” “H” malarkey….. Some serious learning curves lays ahead here.

Ok, with the above in mind this is just me thinking out loud.

I’ve established the fault appears to lie in the focussing servo being unable to lock, this is supposed to occur in the first second of play being depressed. Failure to do so means it drops into a sequence of 4 retries after that it rejects and stops, that’s exactly what’s happening.

I checked the voltage at TP1 and its 12V which I believe is correct. I also tried to scope the S-curve (focus error voltage) at TP-1 when play is pressed but as this appears in fraction of time (500us) I’ve not been able to suss how to catch it even with the timebase turned down.

Therefore I next checked the “Focus On” voltage at N7-5. Now according to the manual “Focus On” is “L” which I take it is “active Low” but what on earth does that mean with regards to an actual voltage, as far a I can see there’s nothing listed which makes it a total mare!

I have 3.4V on N7-5 when the player is just powered on and 3.4V when the play button is pressed, so no actual change takes place and I suspect that’s not correct. Besides that, its way too high as that would mean its putting 3.4V onto the base of Q3 which again I believe is only expecting to see 600mV.

I’m focussing (excuse the pun) on these two anomalies at present.

Anyway I soldered on a wire to the underside of the CONT board to pin N13-5, hooked up the scope and took the following readings. The player was off, I powered on, defeated the interlock, pressed play, as usual it failed to focus (well it would as there isn’t a disc in but take my word for it the fault is present) so it dropped into the four retry sequence before finally reject. I repeated pressing play three further times (that makes for, four goes) before finally releasing the interlock and then powering off.

I scoped the entire operations and they are shown and annotated below. Perhaps the video will help too 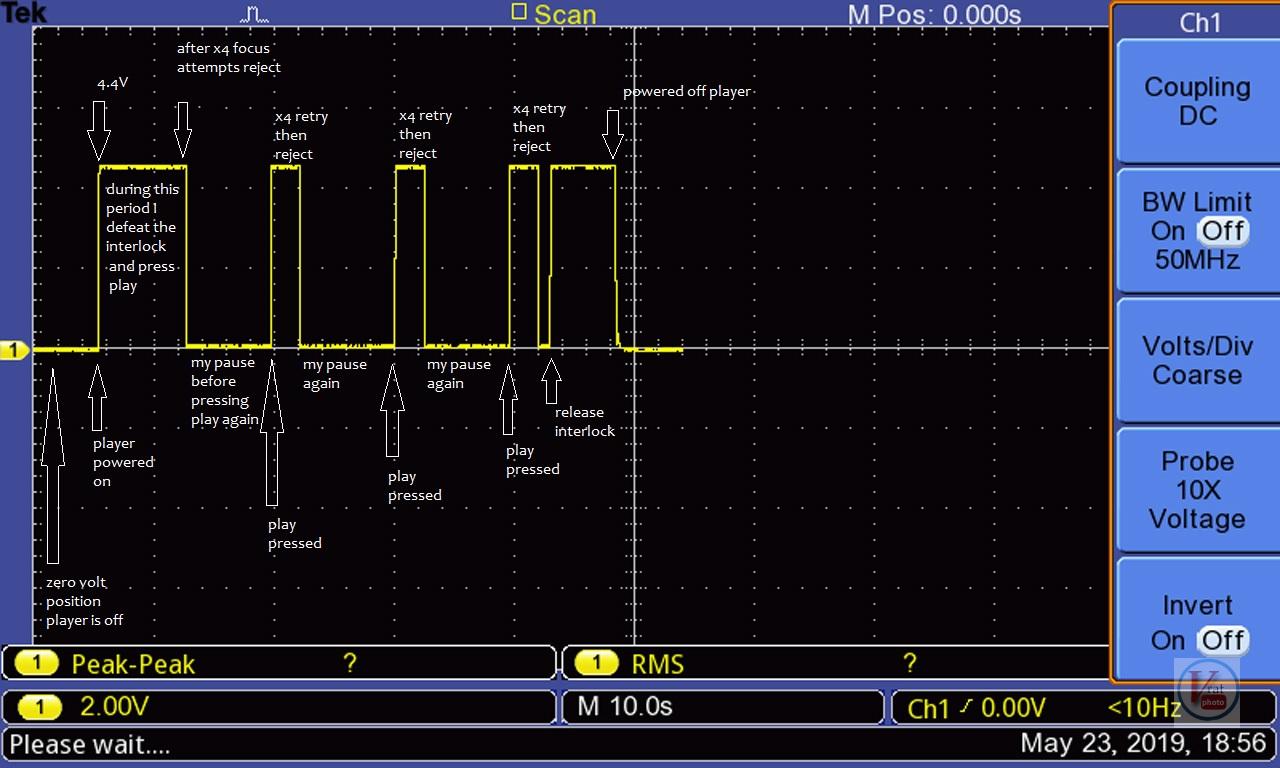 Another thing that’s troubling me is the focus error S-curve waveform does not appear to be present when play is pressed when monitoring TP1. All I have is -12.3V. Also Z3 pin 7 is at -12V and does not change when PLAY is pressed. 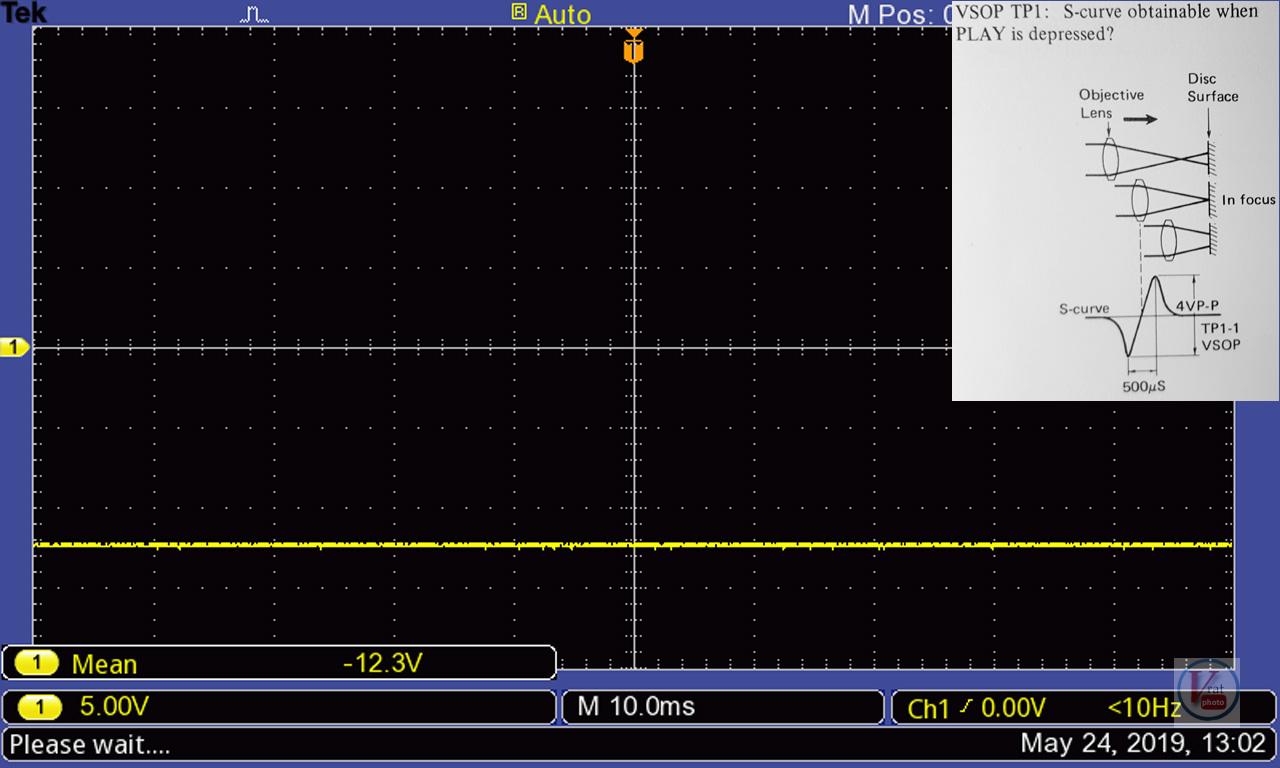