Had to get one of these as I live just four miles from where this set was originally made. See here to read all about the factory. 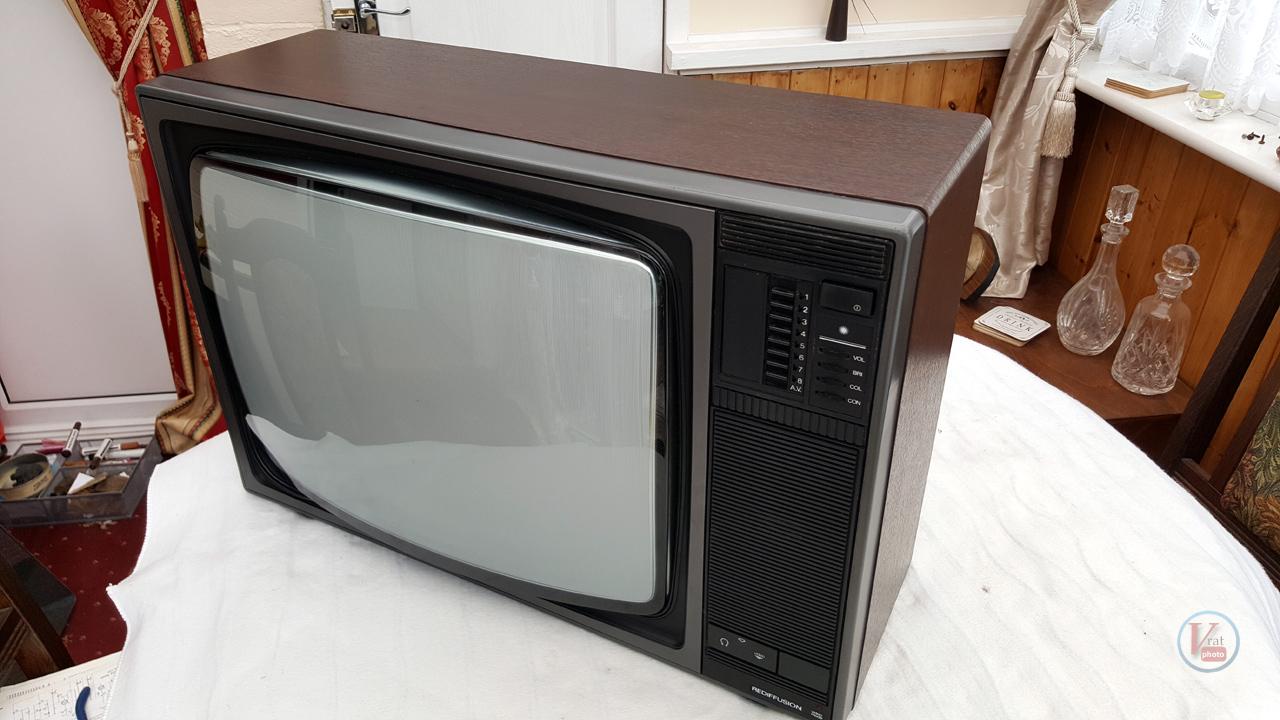 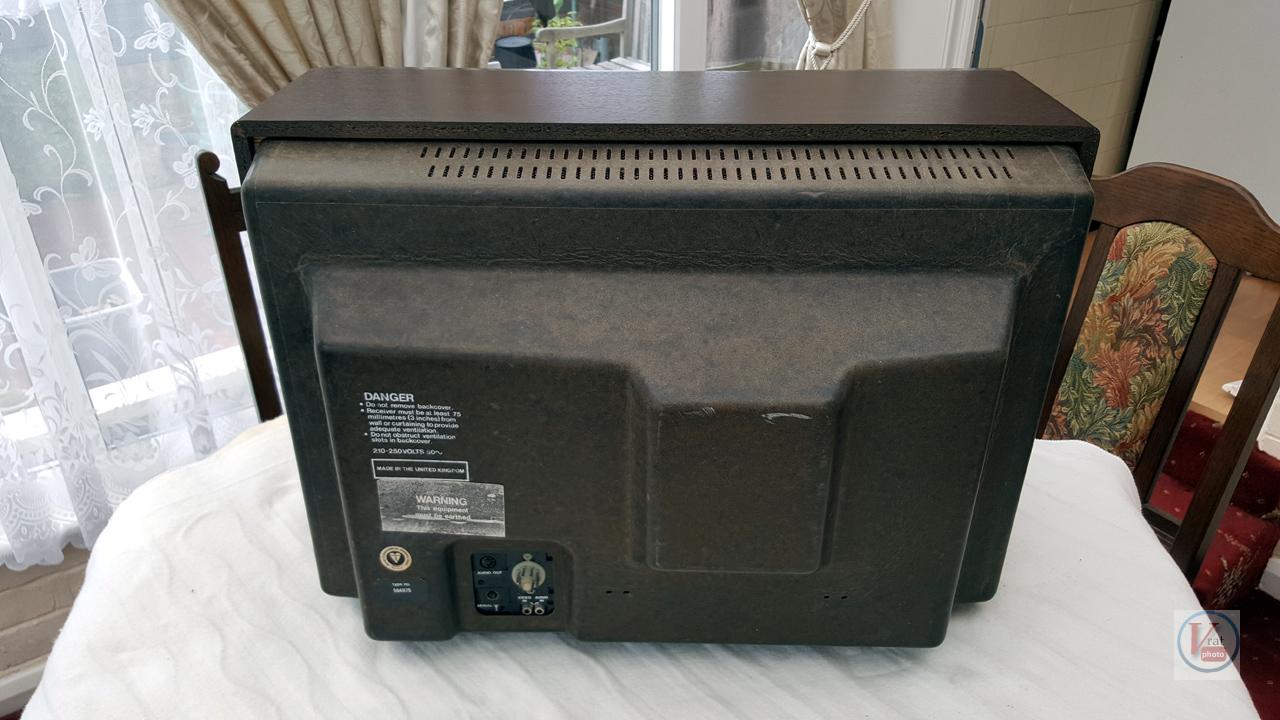 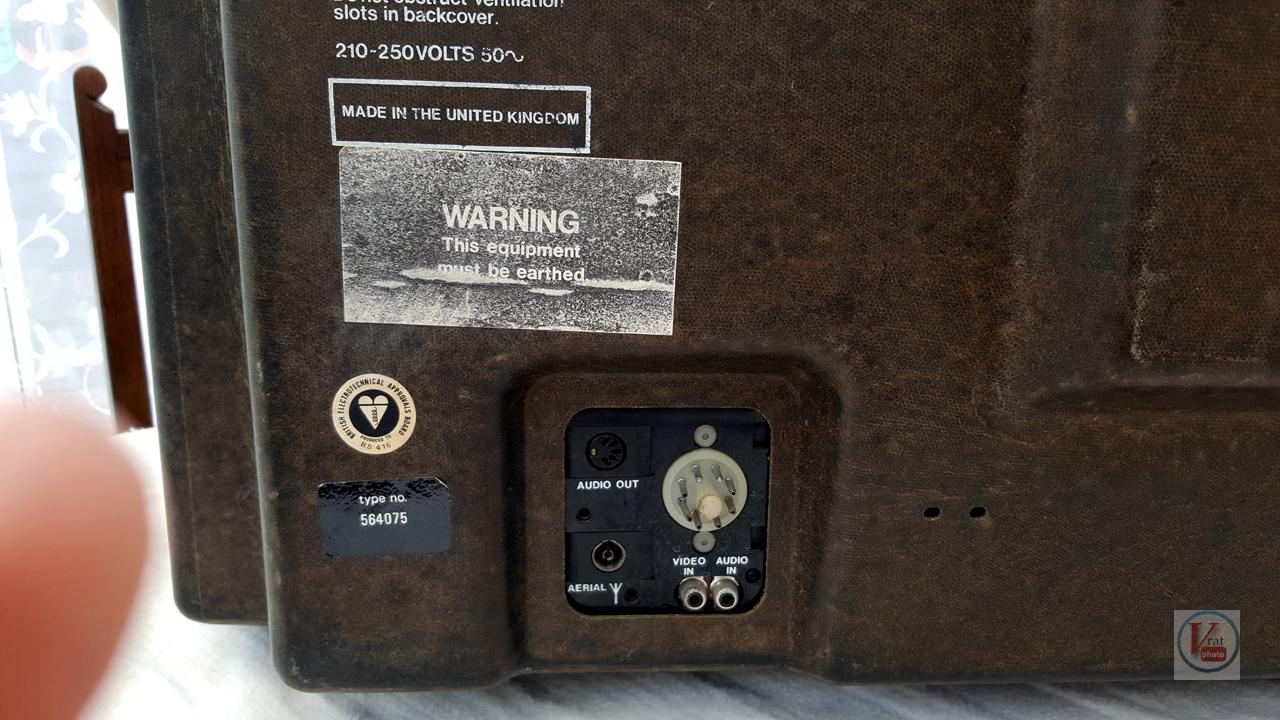 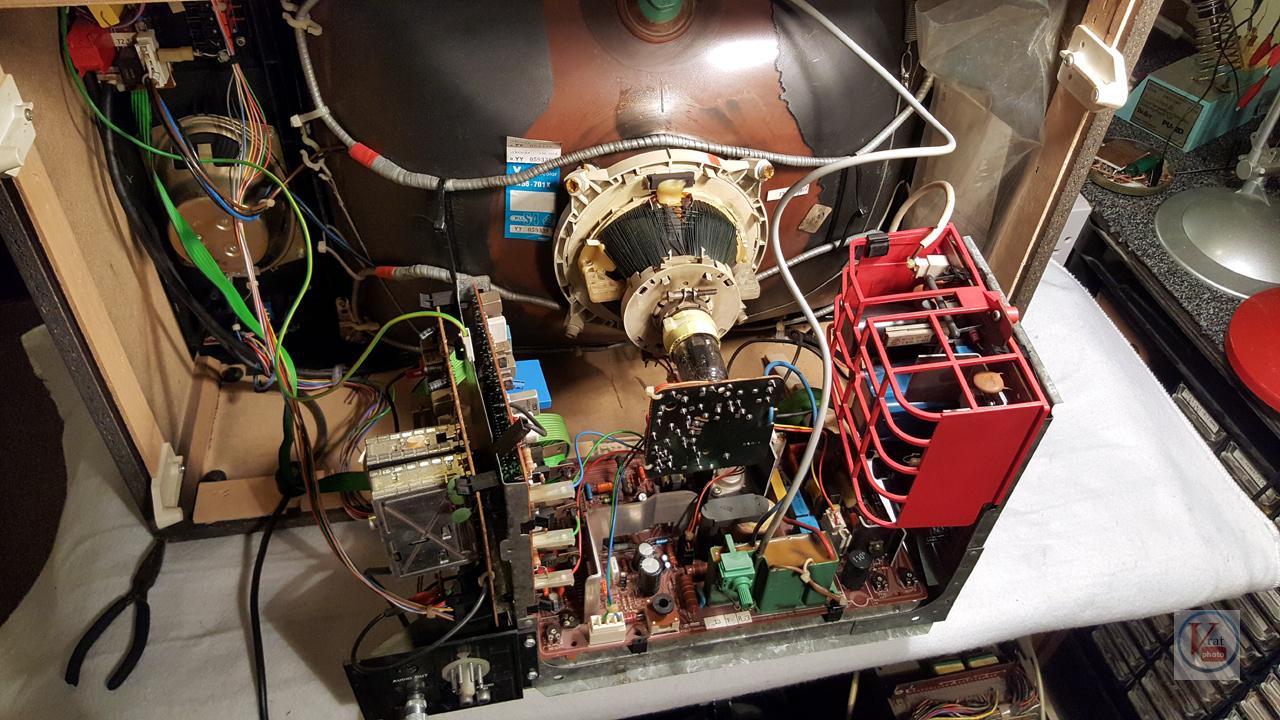 The set is in remarkable condition and the tube very good so I had quite high expectation this one would be fairly OK to power on. Power was applied, sound came up followed by a nice bright snowy raster. I fed in the test card signal and then set about trying to tune it in. Selecting channel 1 no amount of sweeping the frequencies pulled in the test card, hmmm odd.

This set is wired, meaning it can be used both on the Rediffusion cable system or over air broadcasts via UHF input. Not being familiar with this I wondered how it determined which input to use, does it detect a signal on wired or UHF and present to the screen. Whilst ponmdering what my next move was I powered down and went of to make a brew. When I came back I powered the TV on again but this time nothing! Dead!

That’s where there fun now begins. 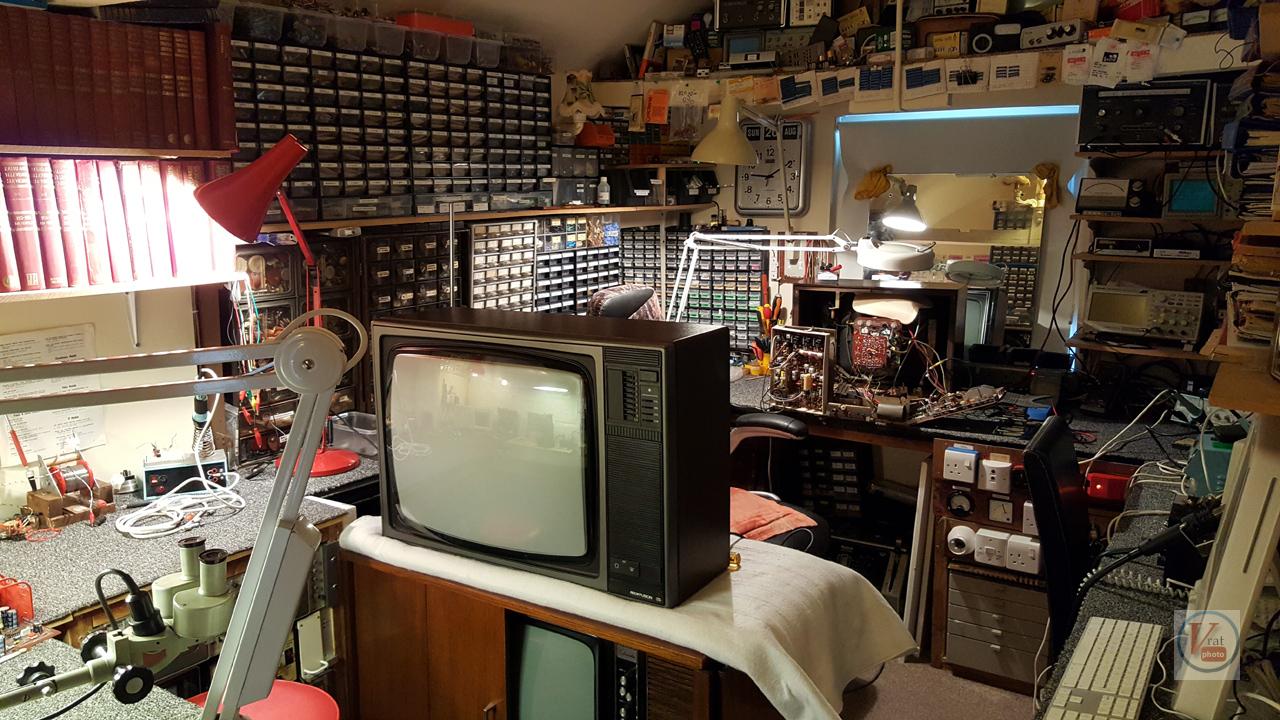 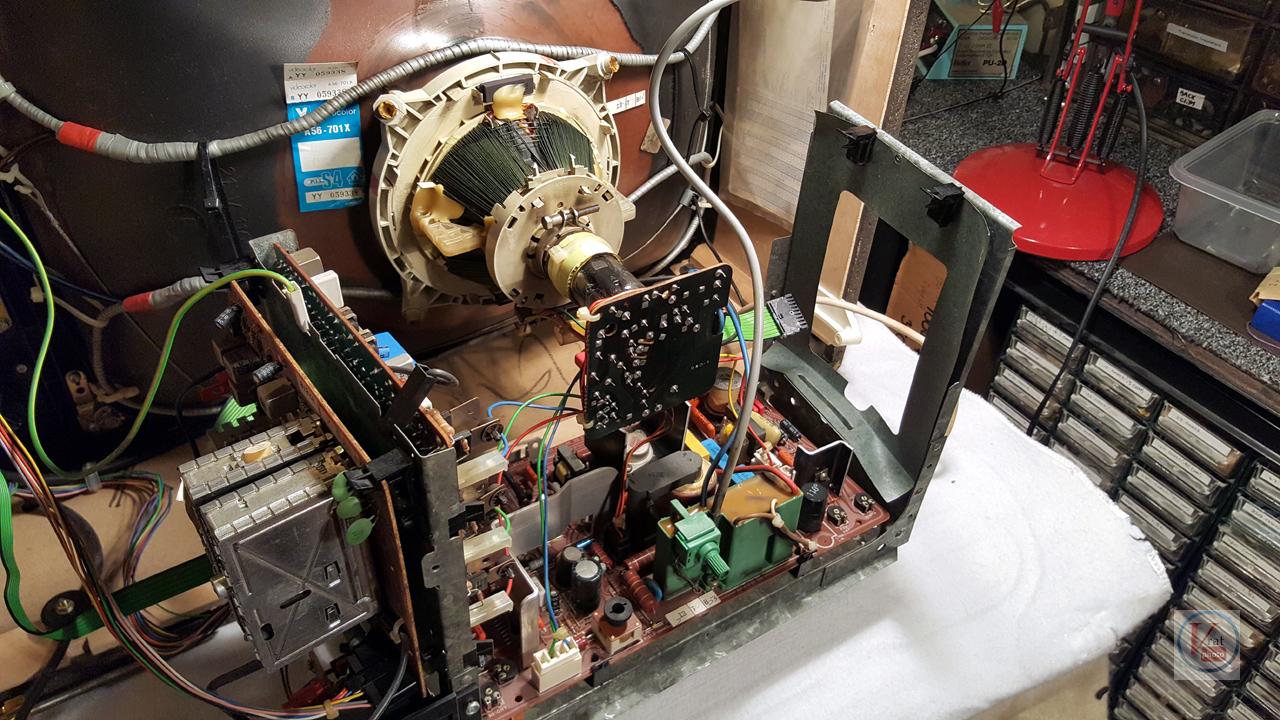 Thanks to forum member “Red_To_Black” who made me aware of a very good article in the January 1994 edition of Television. It covers many of the possible causes for this scenario, most residing in the power supply, which can be powered via the mains out of the set with a load between 4L5 and chassis. 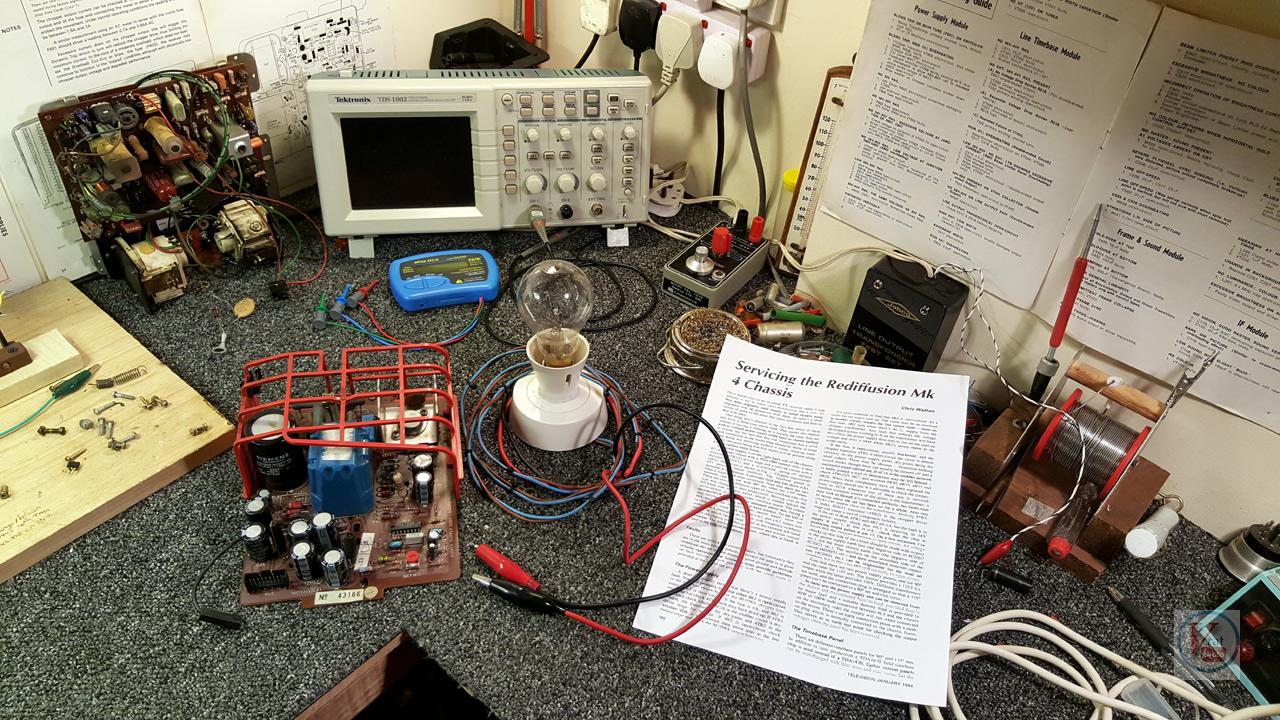 It won’t start with R2 open but now to ascertain what caused it to open. 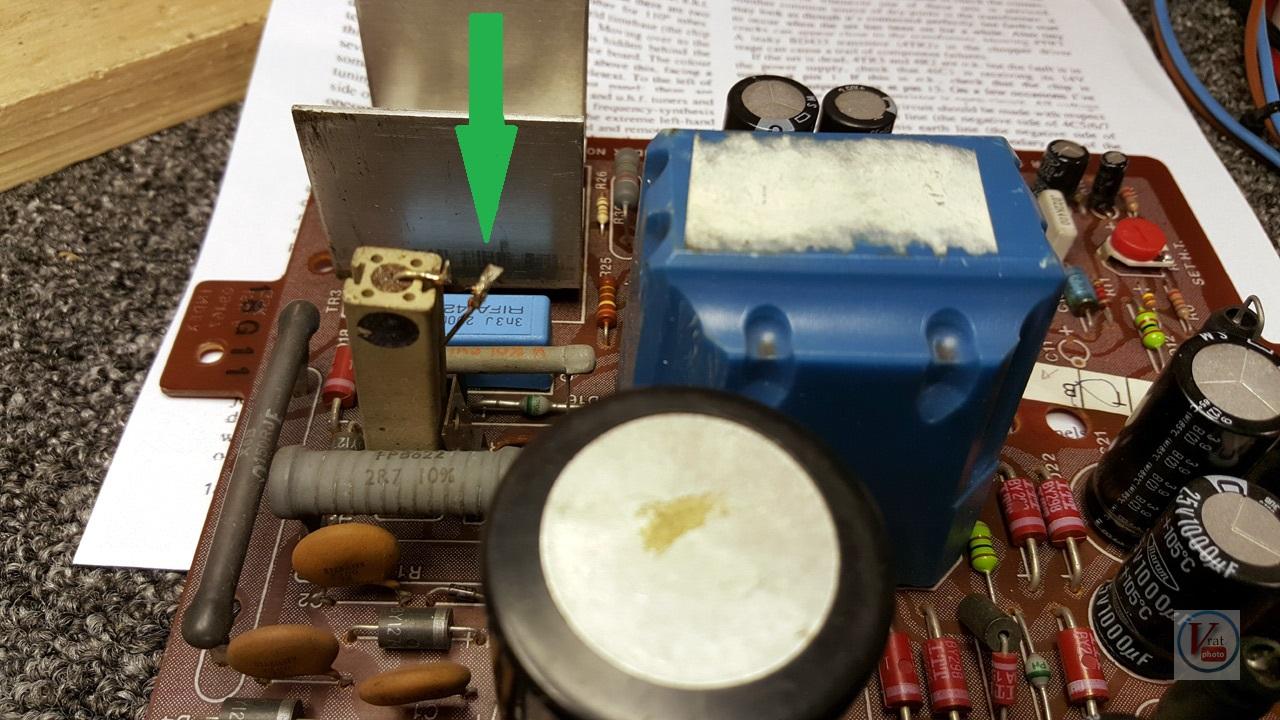 The Chopper transistor is OK, wondering if the fault is in the line output stage not the PSU 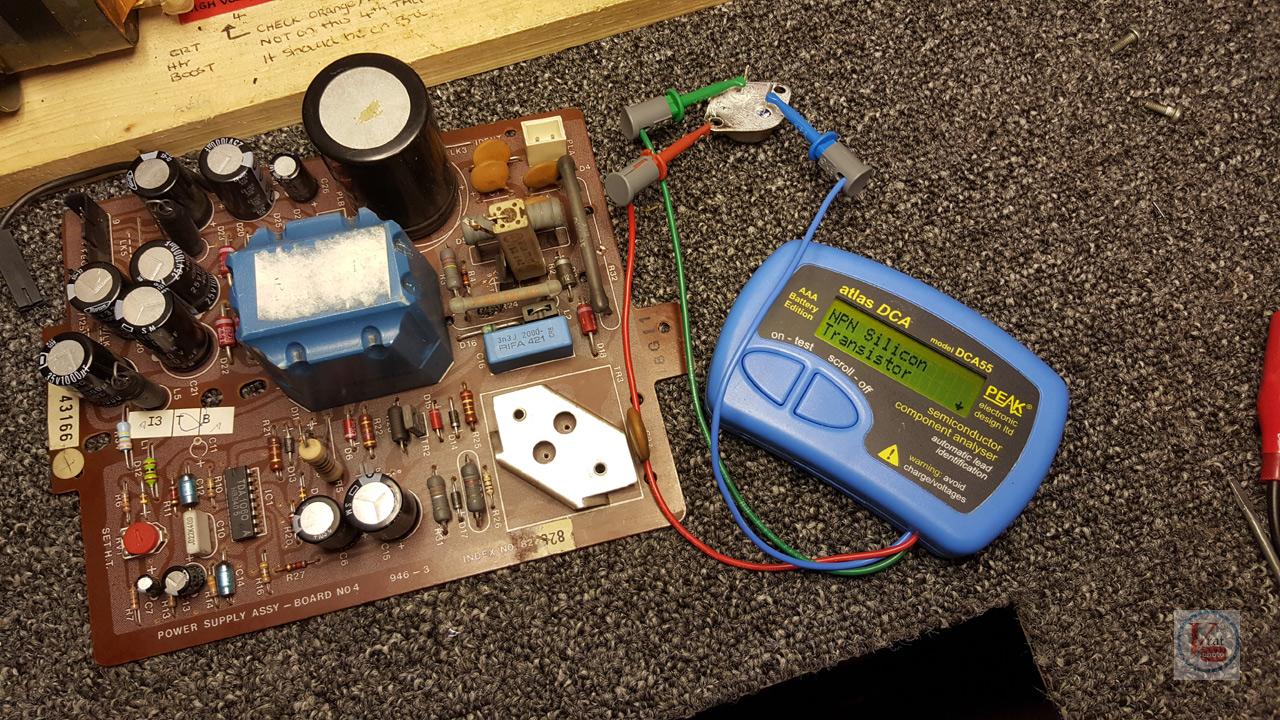 Out with the timebase to check the output transistor 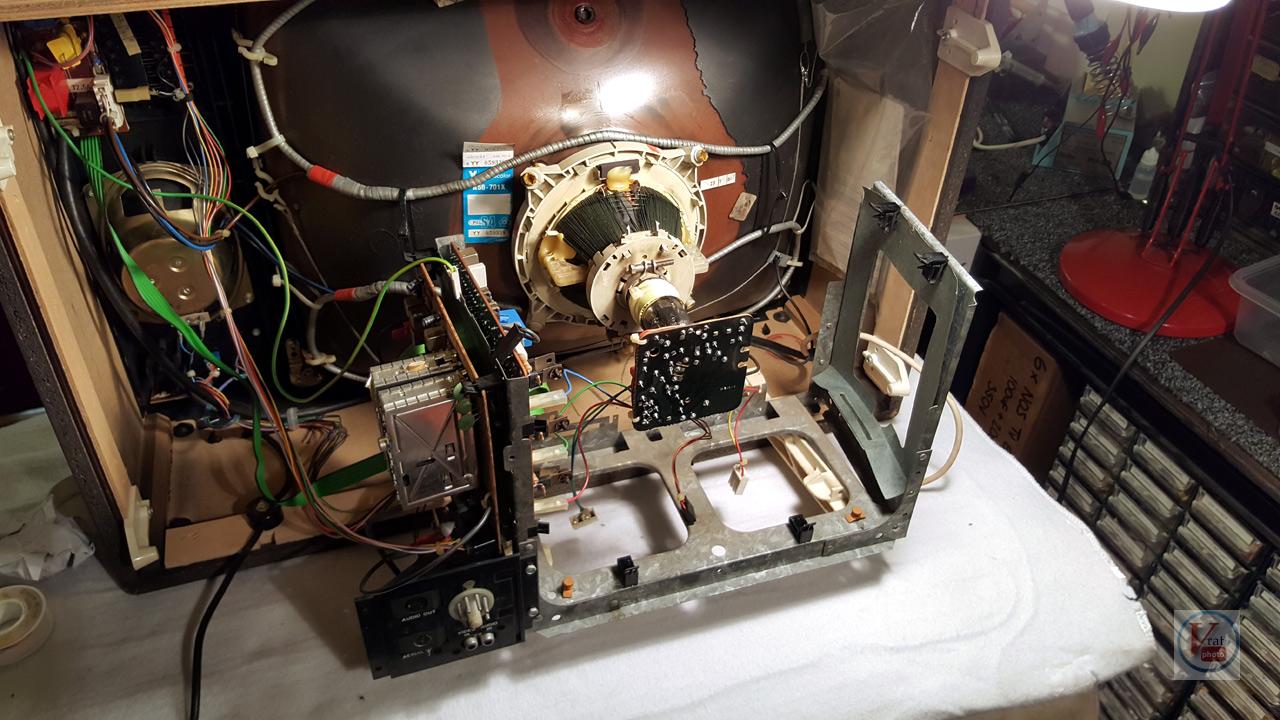 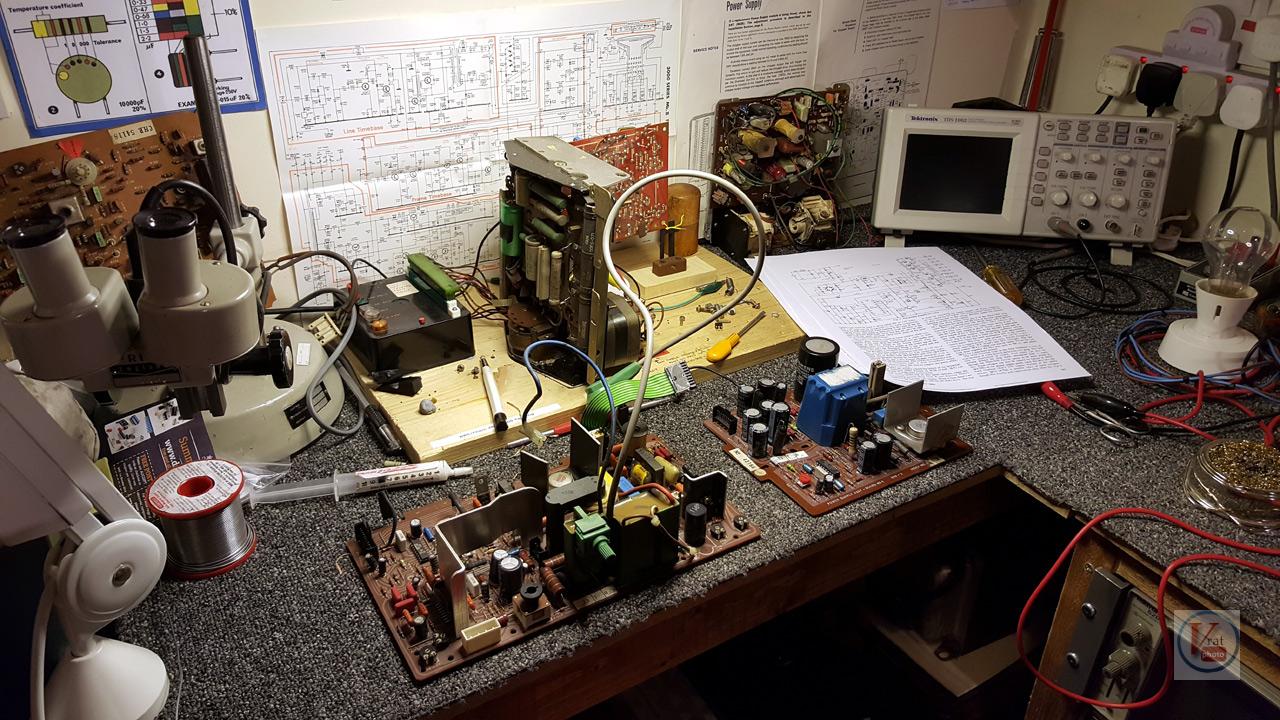 Nothing wrong with the BU208 output transistor…… What on earth can it be tripler or something I’ve missed. 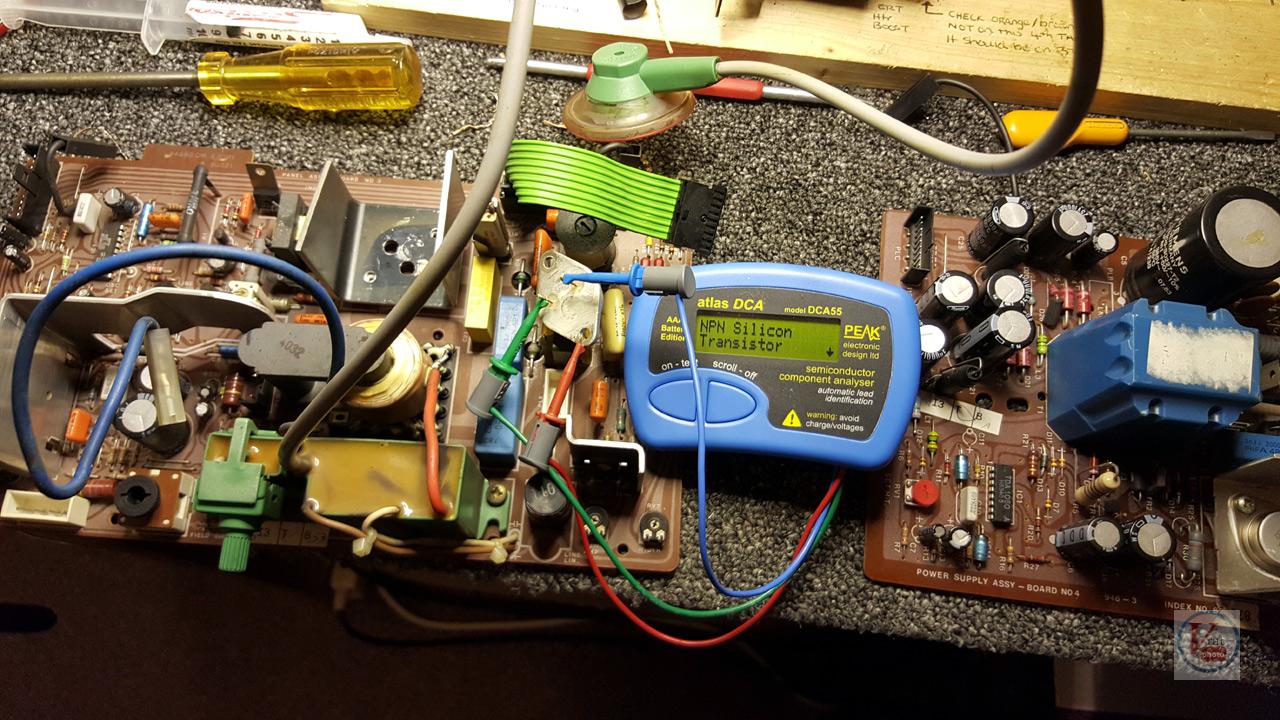 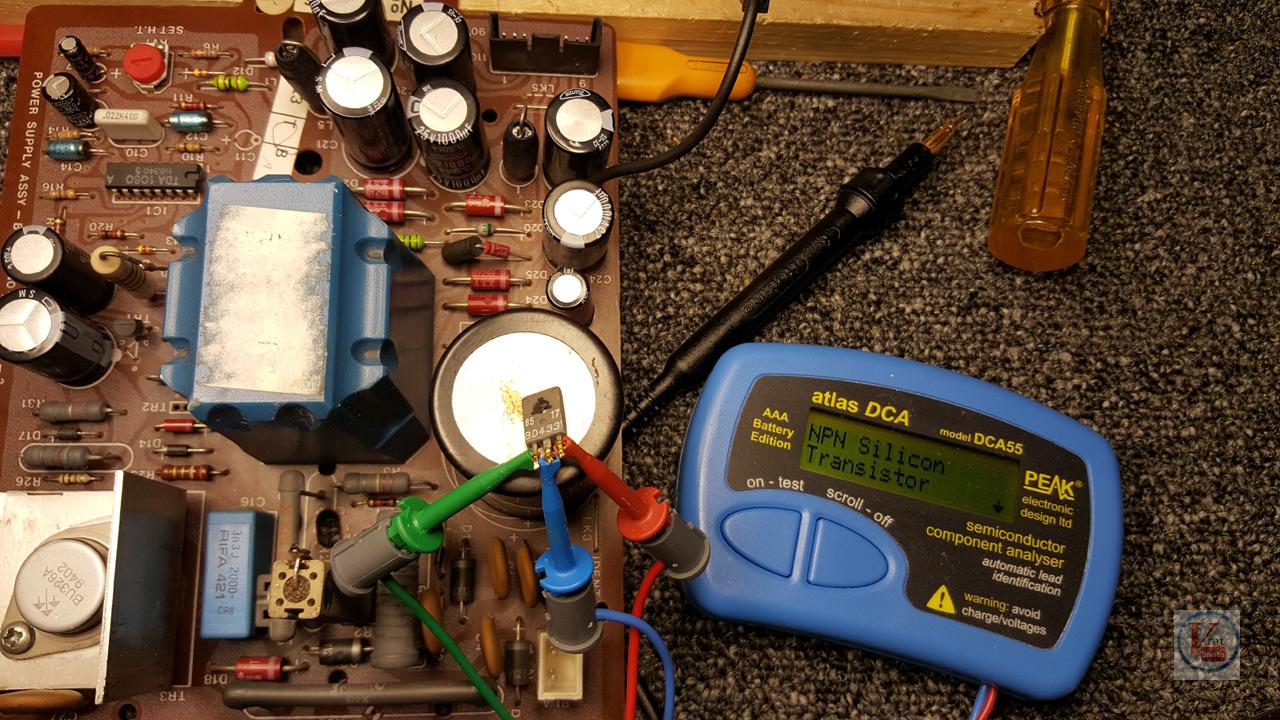 However the culprit is THY1 the 2p5m thyristor. I tested it on the DCA55 and it could not find a component. 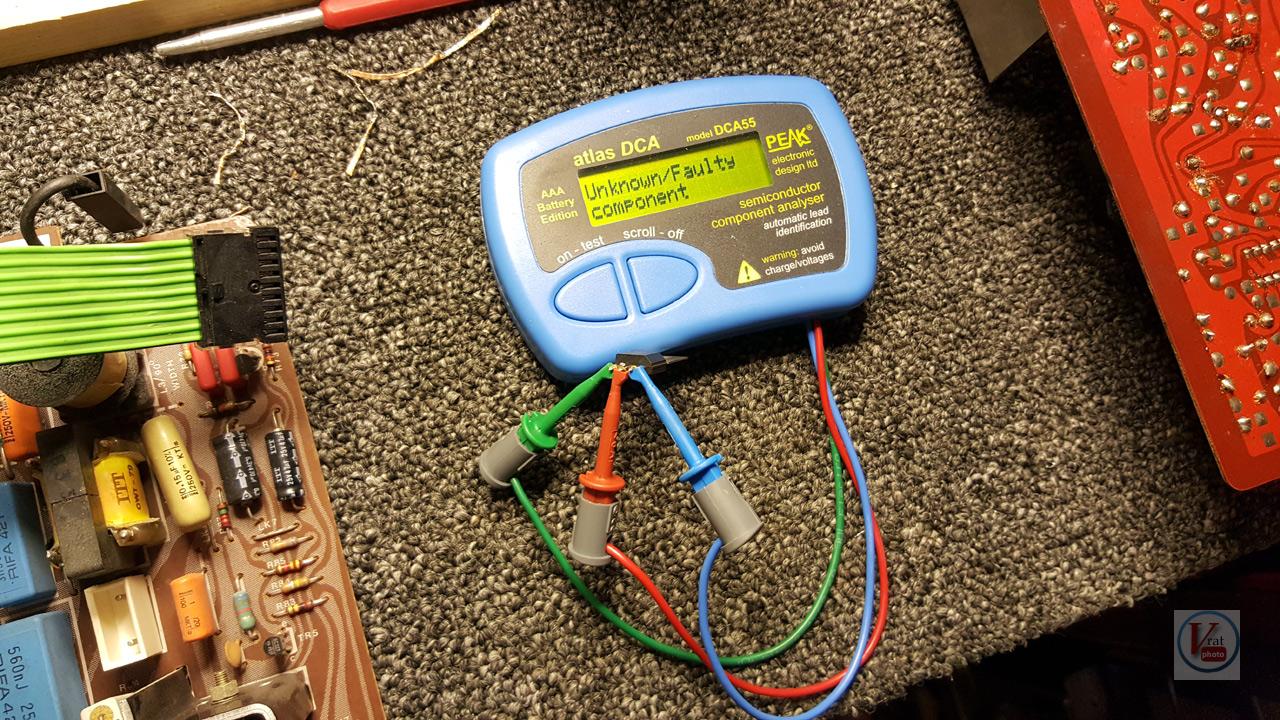 The DCA55 spec states it can test thyristors that require gate and holding currents of less than 5mA, the 2p5m is around 2mA so I think its toast. To be certain I got my home built thyristor tester out and it confirmed that the thyristor cannot latch. 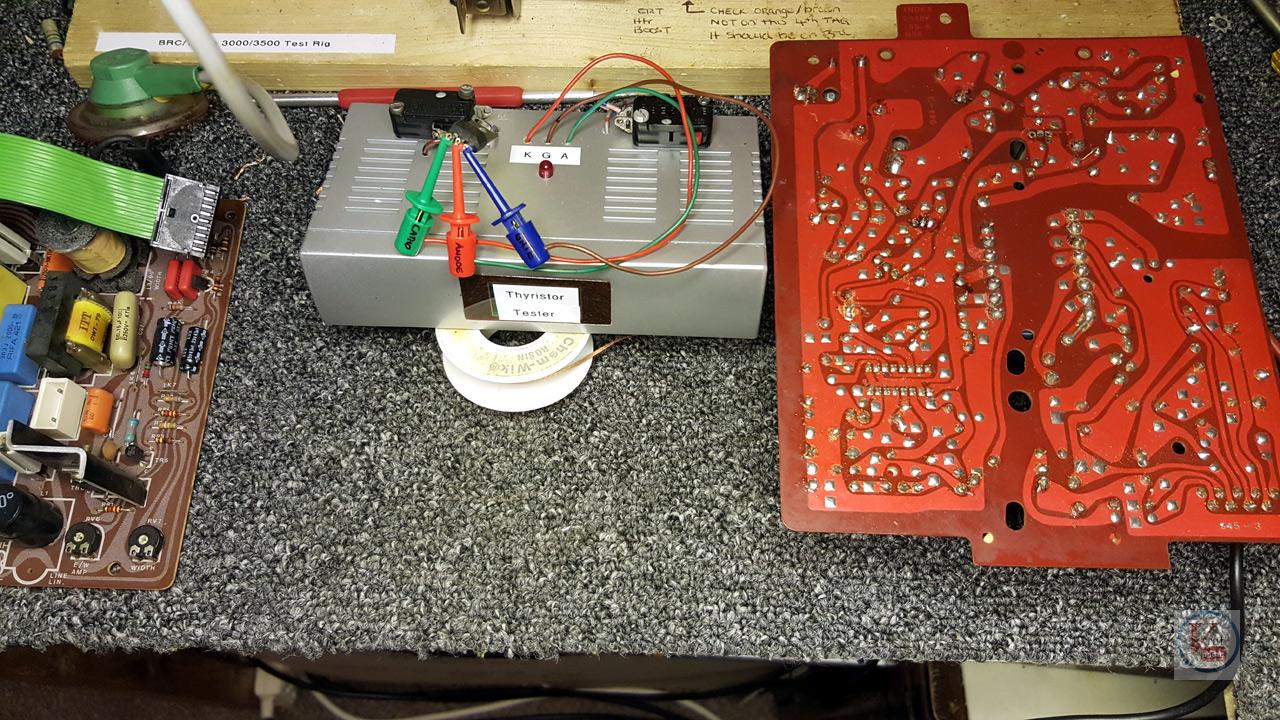 Thanks to Malc’s comment below I think he’s sussed my tuning trouble the tuner has been set to wired. 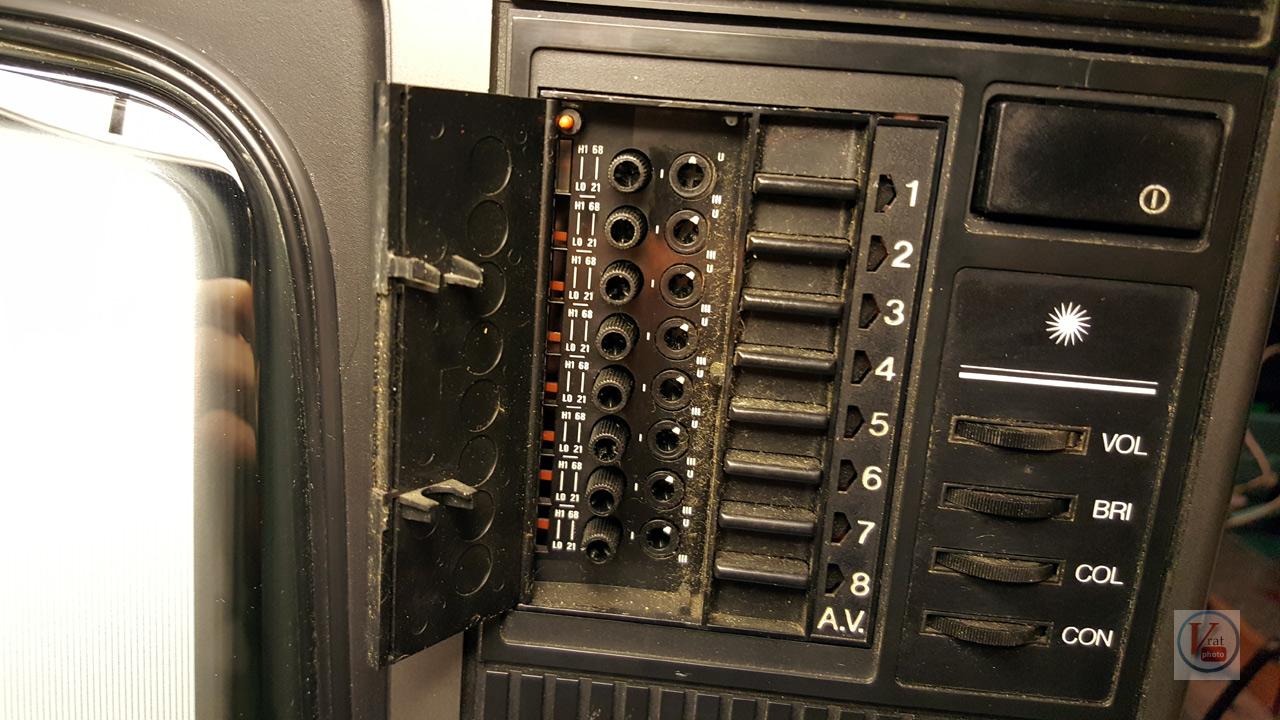 New 2P5M tested and fitted, the set is now working. great picture too. 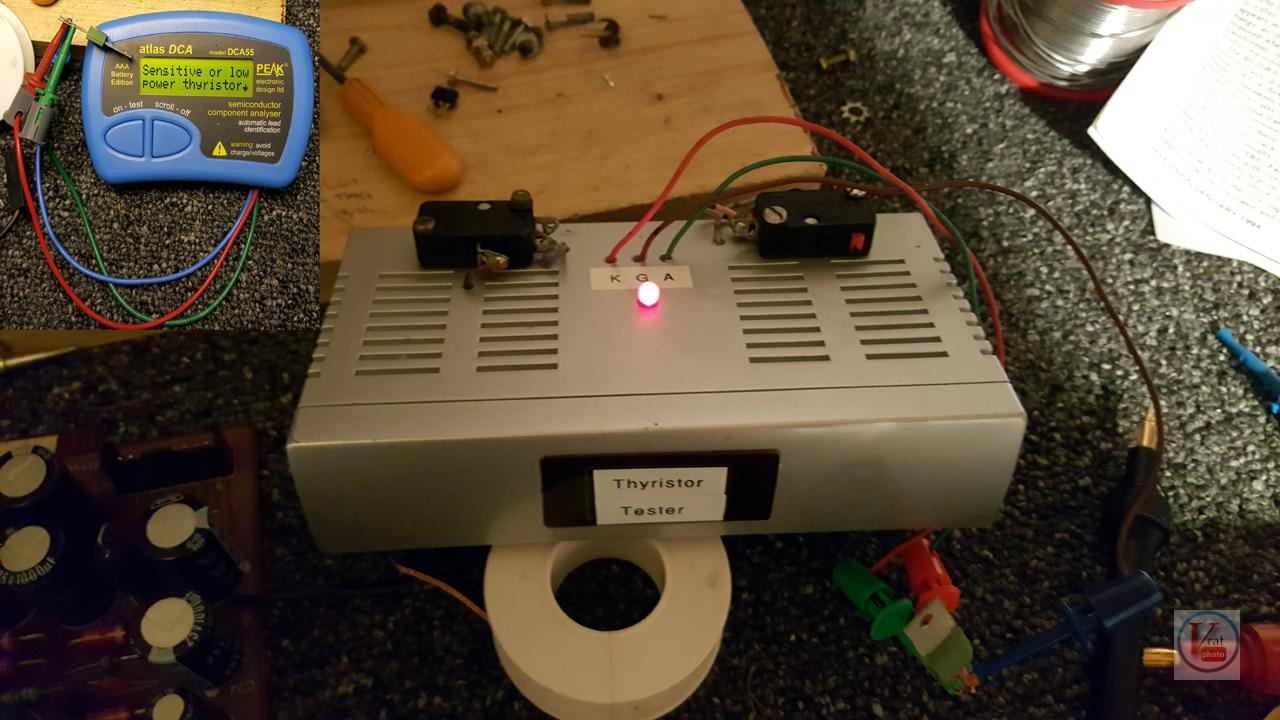 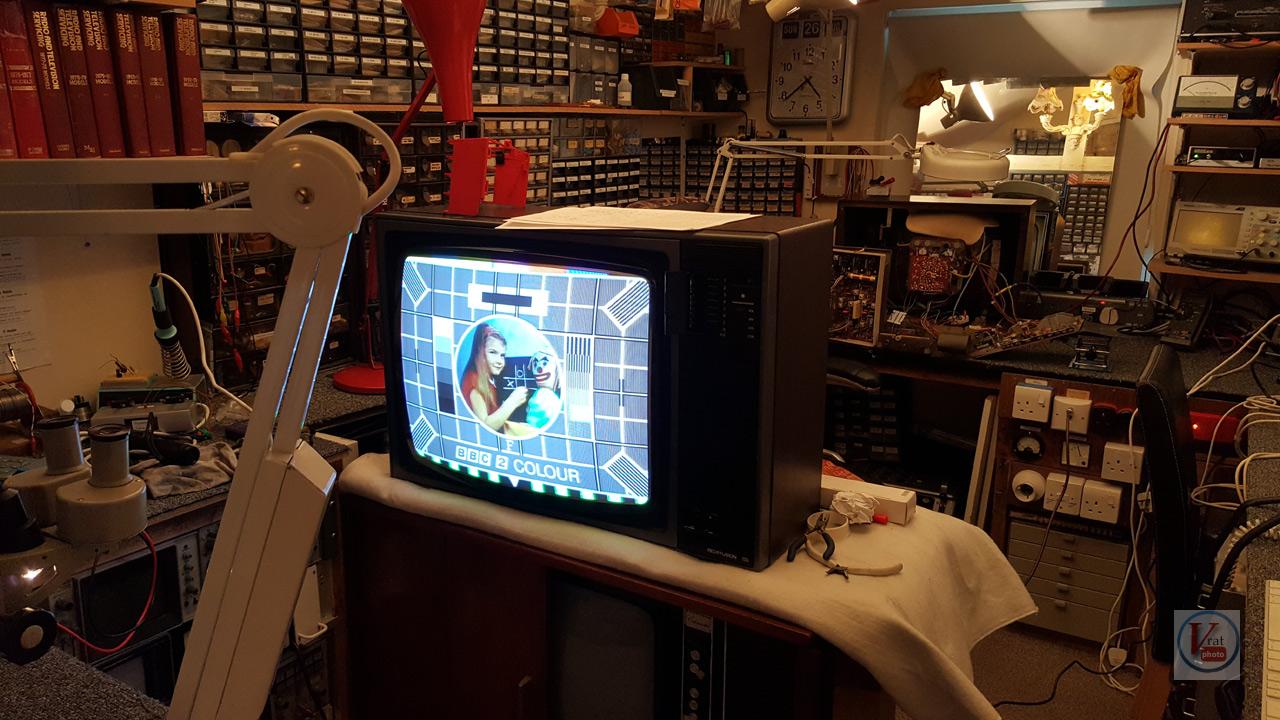 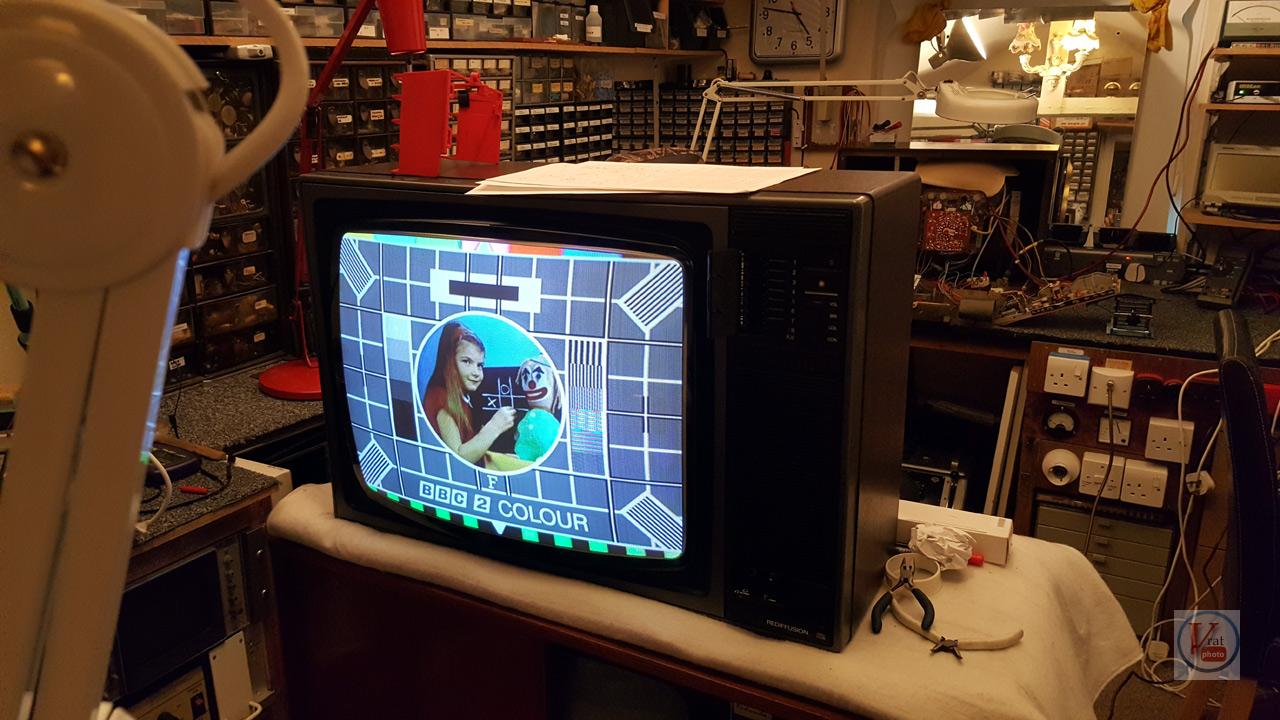 Mke sure the band switches behind the tuner door are set to UHF.

Ah-ha that would explain it then, I was trying to tune the test card in on CH1, it appears that’s off-set. How do you change them looks like you need a tool. See photo above.

We owned a Reddifusion Mark IV colour TVRM from 1984 – 1988 and was disapointed in the Picture quality compared to the Mark 3 we owned earlier.I found it hard to adjust the Brightness & Contrast settings to obtain the correct ballance of grey scale through out the picture. Adjusting the picture satisfactory on medium to bright pictures meant that on dark scenes ,the picture was to dark to see the image displayed.Re-adjusting the Brightness and contrast settings to achive a satisfactory image on a dark picture meant that medium to bright pictures were to bright to watch.Rediffusion field engineers were called out numerous times in a bid to resolve the fault to no avail.
Ended up getting rid and investing in a Sony Black Triniton which displayed excellent pictures for 20 years.

I can see that the CRT label as S4 PLL but what make of CRT is it? It’s a nice bright picture.

The CRT manufacturer is Videocolour.

Note: Videocolour was an Italian company formed from another Italian CRT manufacturer called ERGON which was sold to Thomson in 1971 and the PIL technology (Precision In Line) was produced by a collaboration with RCA. (ERGON S.P.A., ANAGNI, FROSINONE).

I grew up with a ‘piped’ B&W TV – with a separate rotary channel switcher, gutted that I couldn’t plug in an Atari like most of my mates, then along came channel 4 and the TV was replaced for an aerial set to accommodate the new channel. I picked up a cheap tennis type game for £1 of a mate – happy days. Then I started work and saved up for an Atari, soon as I plugged it in the Telly died – my old fella wasn’t happy, no TV over the weekend lol.

Hi, I have a Rediffusion TV which I am sure works, but I have no knowledge on the subject. On the front it has Precision-In-Line with a remote control. The channels switch over on the display, from 1-16 but only using button 4.

Is it possible to upload pictures to your Forum.

is it possible to upload pictures to you forum