This Sanyo VTC-5000 Betamax recorder is the 10th VCR addition to my collection. I now have all the formats I’m interested in, Philips N1500 VCR, Philips N1700 VCR, Philips V2000, VHS and now finally Betamax.

The Sanyo VTC 5000 apparently sold very well in its day. This player was listed local to me and was too good an opportunity to pass up. This example is in very good condition and quite stylish looking for a top loader. Features include a 7 day, 1 event timer, picture search and pause (albeit in monochrome).

The 5000 used a redesigned mechanism from earlier Sanyo models such as the VTC-5300. Compared to my Ferguson 3V16 its remarkably light weighing in at only 8 kgs. Sanyo also reduced the number of mechanical solenoids in this model to none. Instead the loading motor carries out all the mechanical operations needed.

Another unique feature of this VCR was that it unthreaded the tape and returned it into the cassette shell before performing winding. This is something which was the same as its rival VHS system.

I’ve ordered a belt kit just in case and also purchased a batch of Betamax tapes with 1980’s recordings on them so hopefully it will prove to be an interesting little project. I’ve also bought a suite of Sanyo Betamax VCR service manuals which includes the VTC-5000, these shall be scanned in due course. 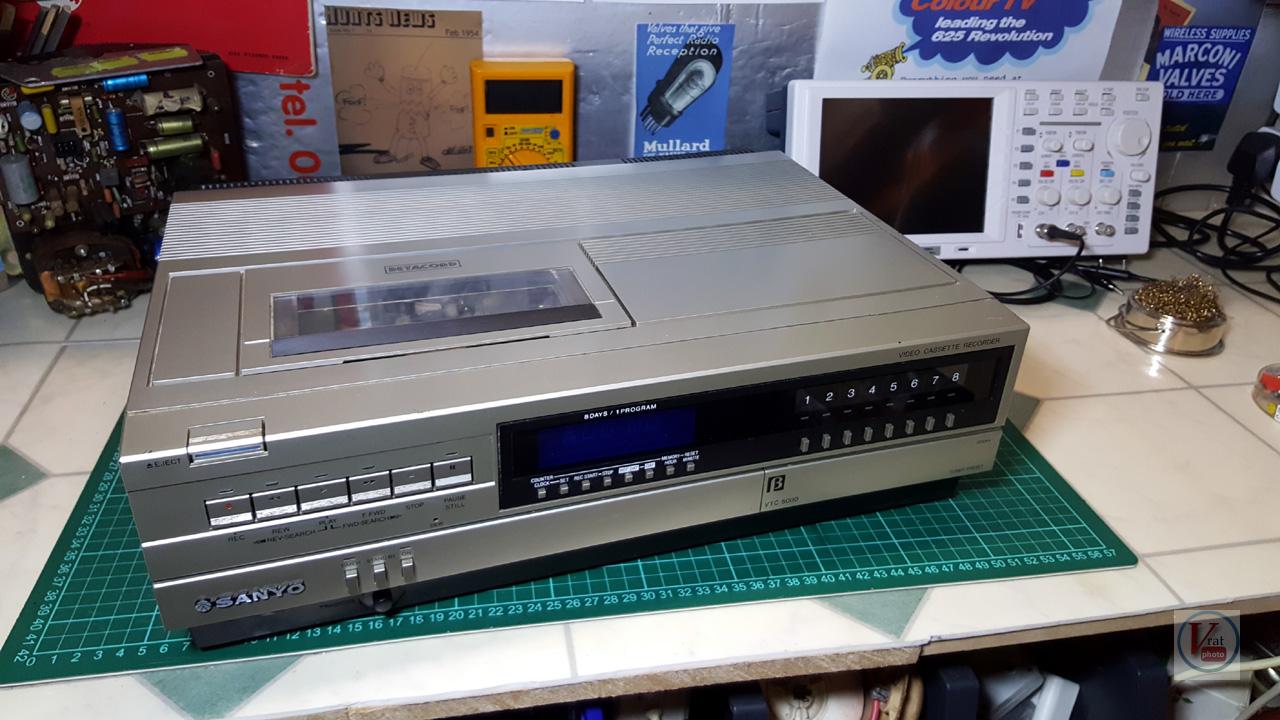 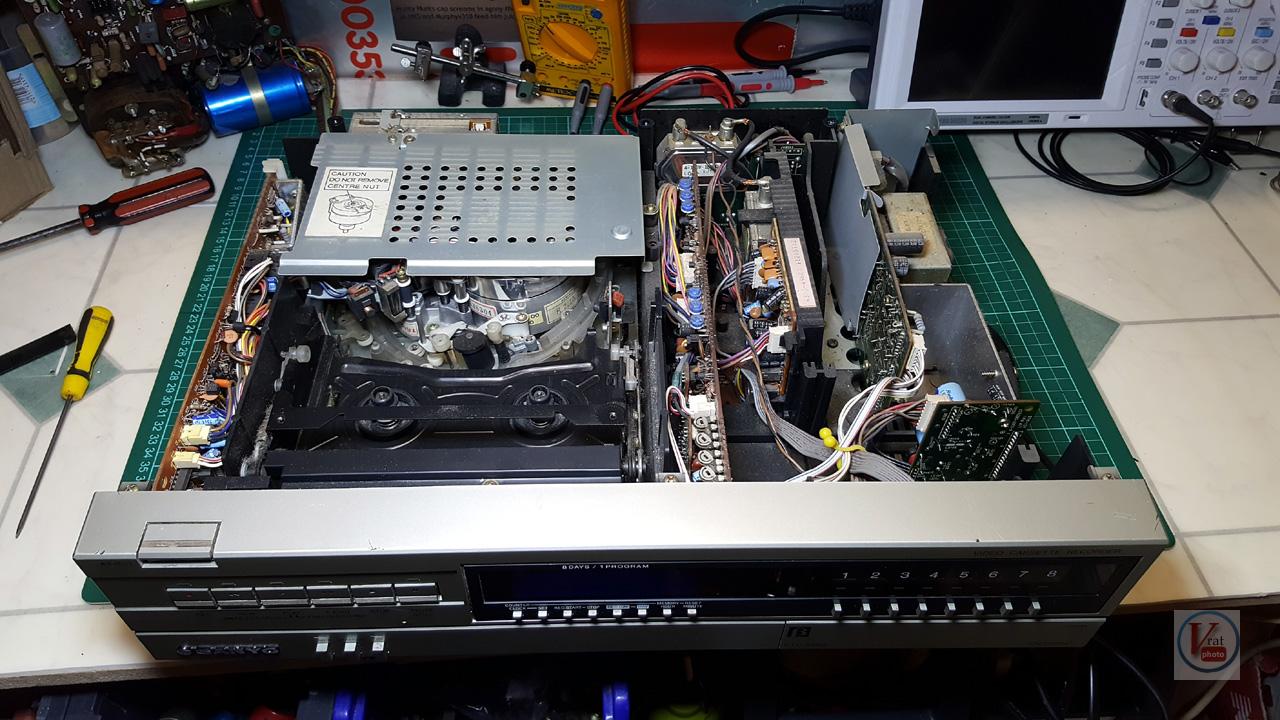 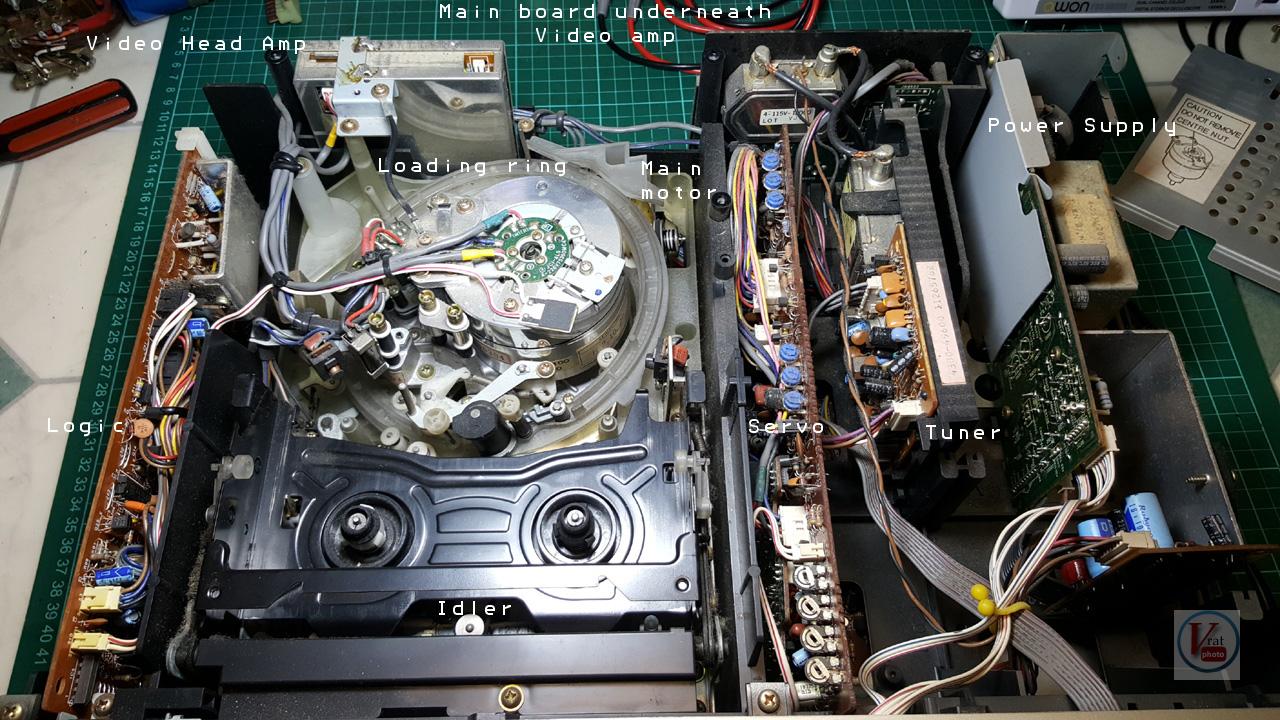 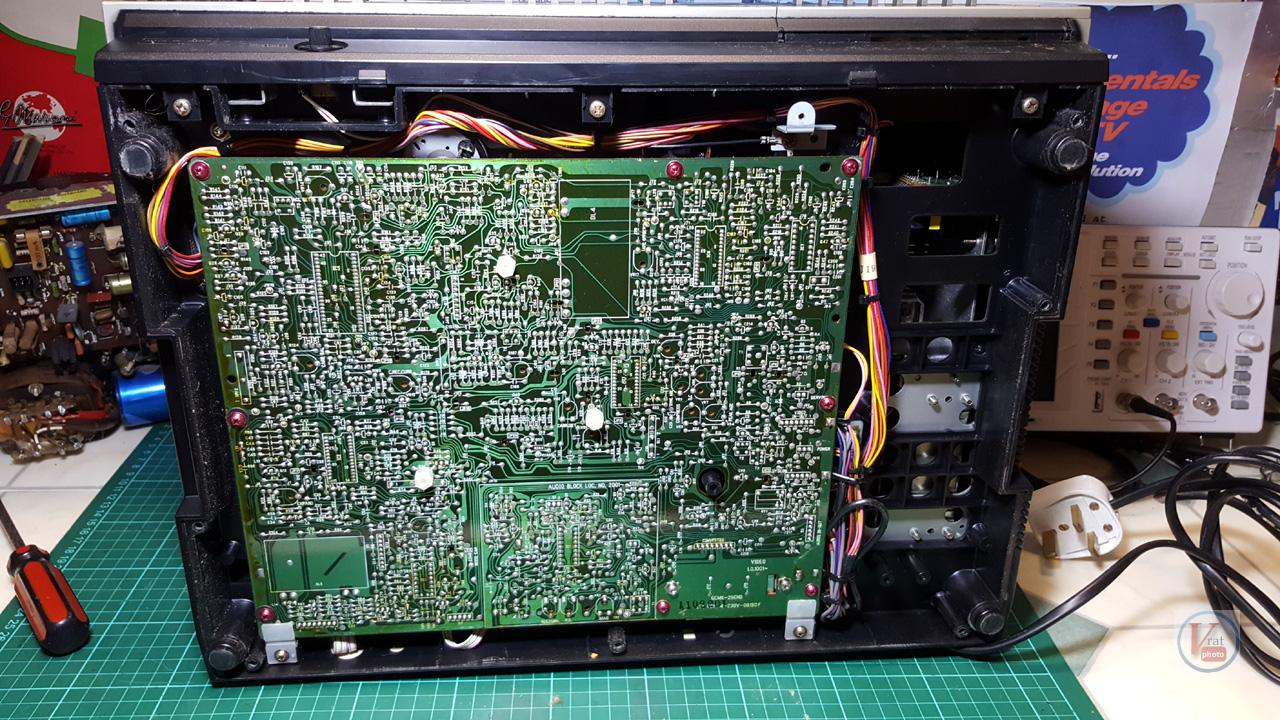 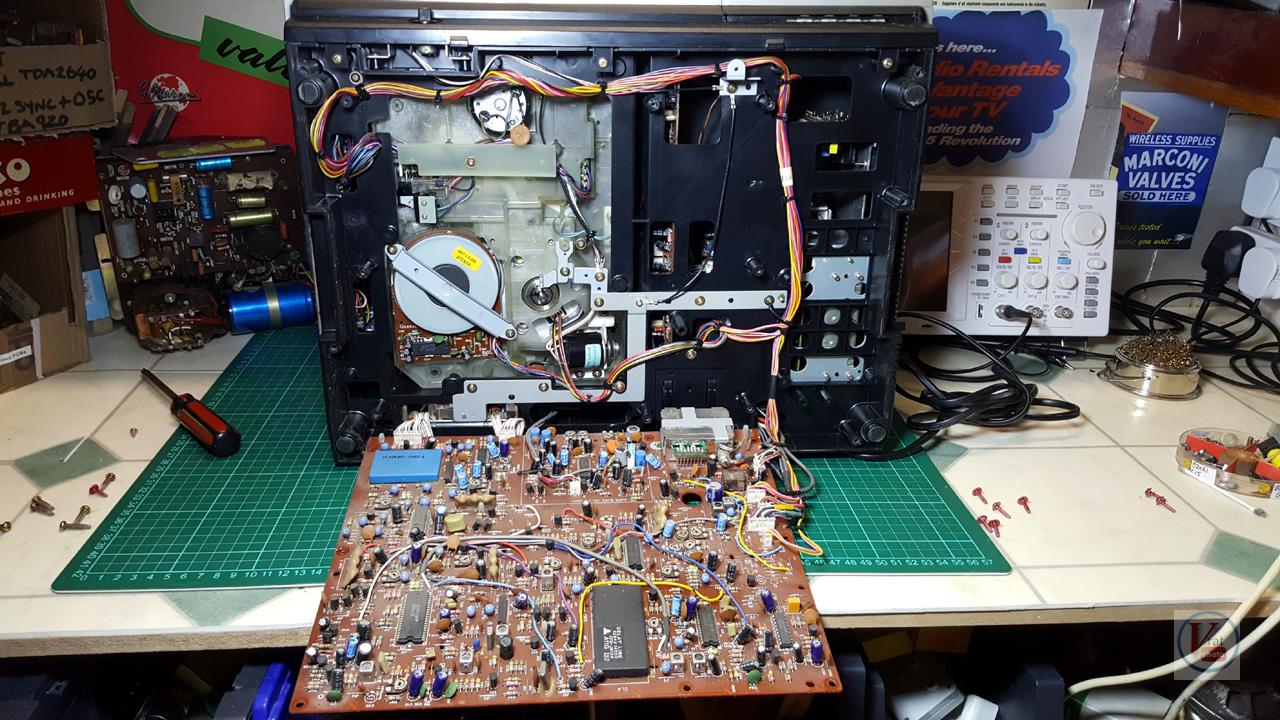 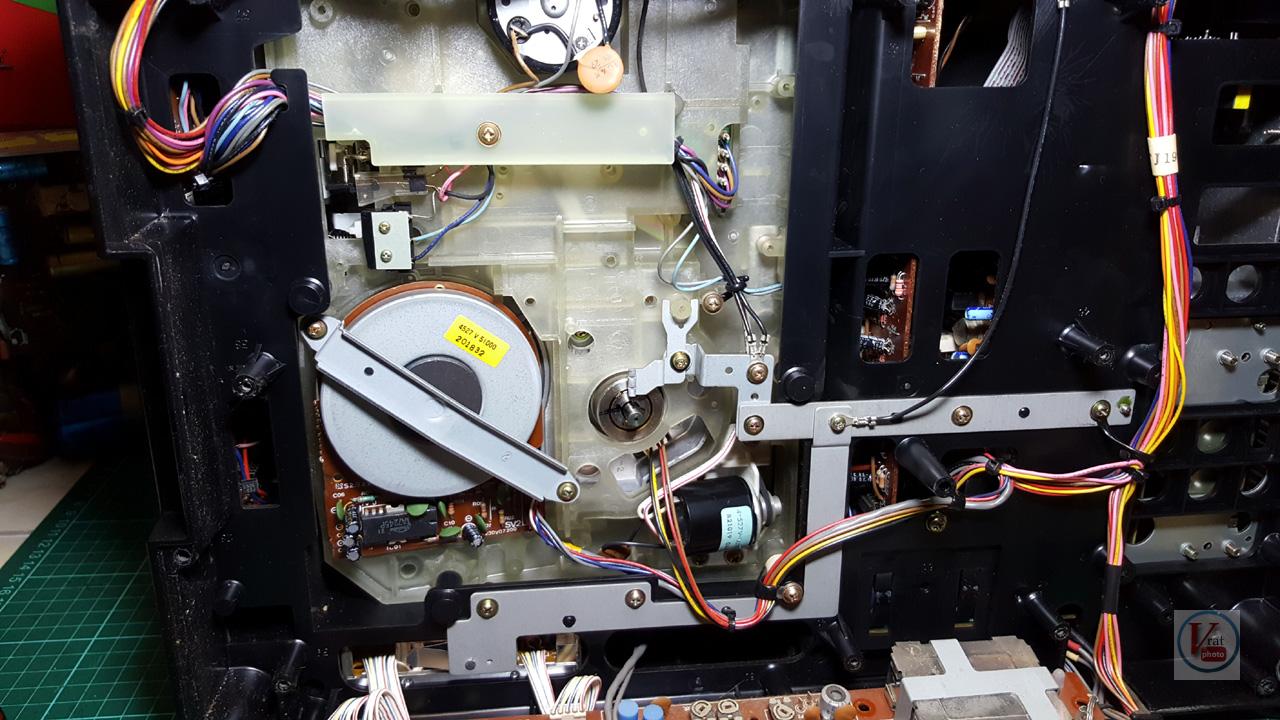 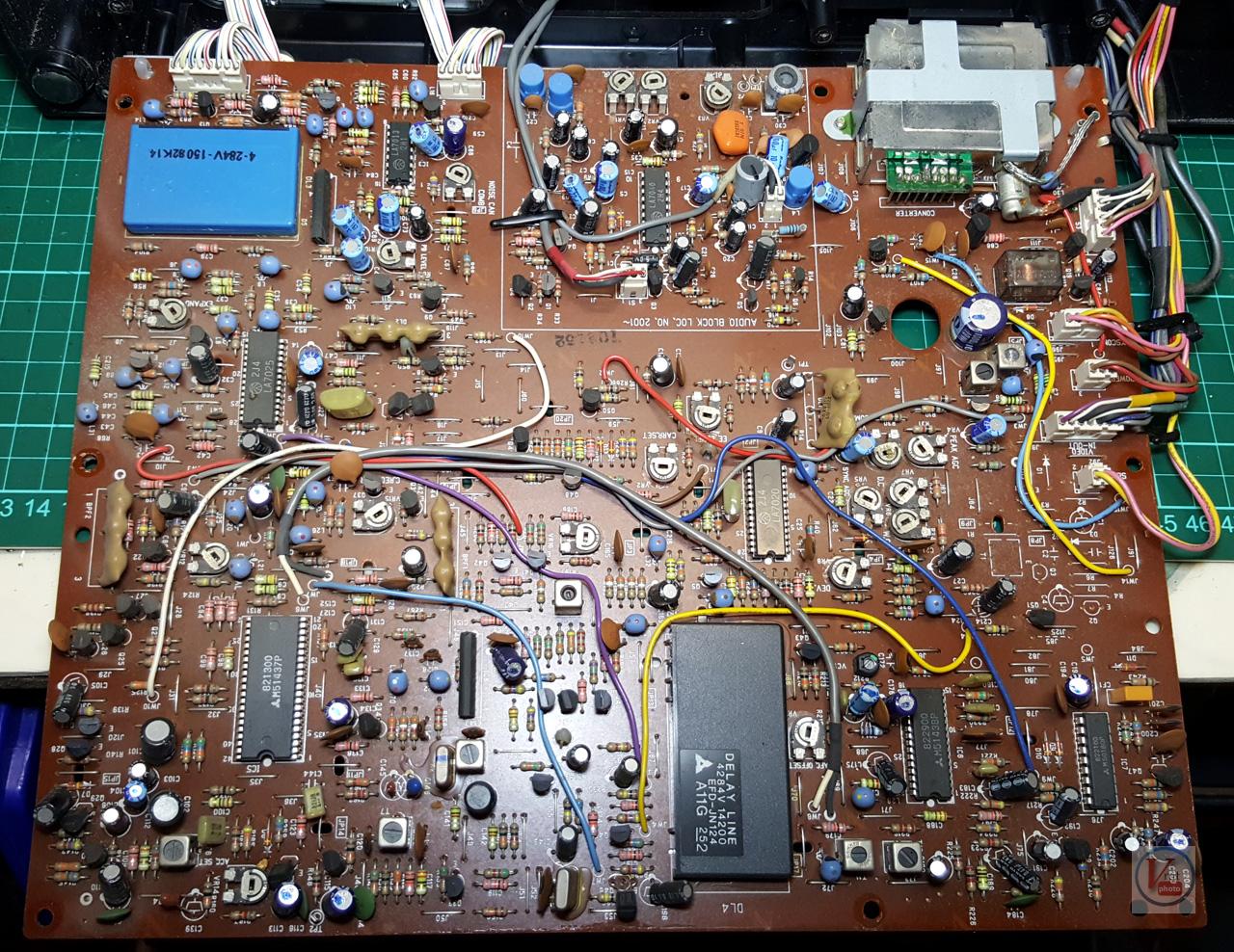 Despite ordering new belts and a new idler from the U.S.A, when my Betamax tapes arrived I put one in to test and the VTC-5000 is working perfectly. All control functions works and the picture quality is superb on my TX9. The photo below does not do justice to the actual quality.

Oh well that was a bit too easy, out of all the VCR’s I’ve collected this is the first to work out of the box. The condition of the VCR suggests it was looked after very well and perhaps not used a great deal.

Lots of fun to be had looking through about 20 Betamax tapes now, all sorts from the 1980’s tapes from the UK analogue TV channels. 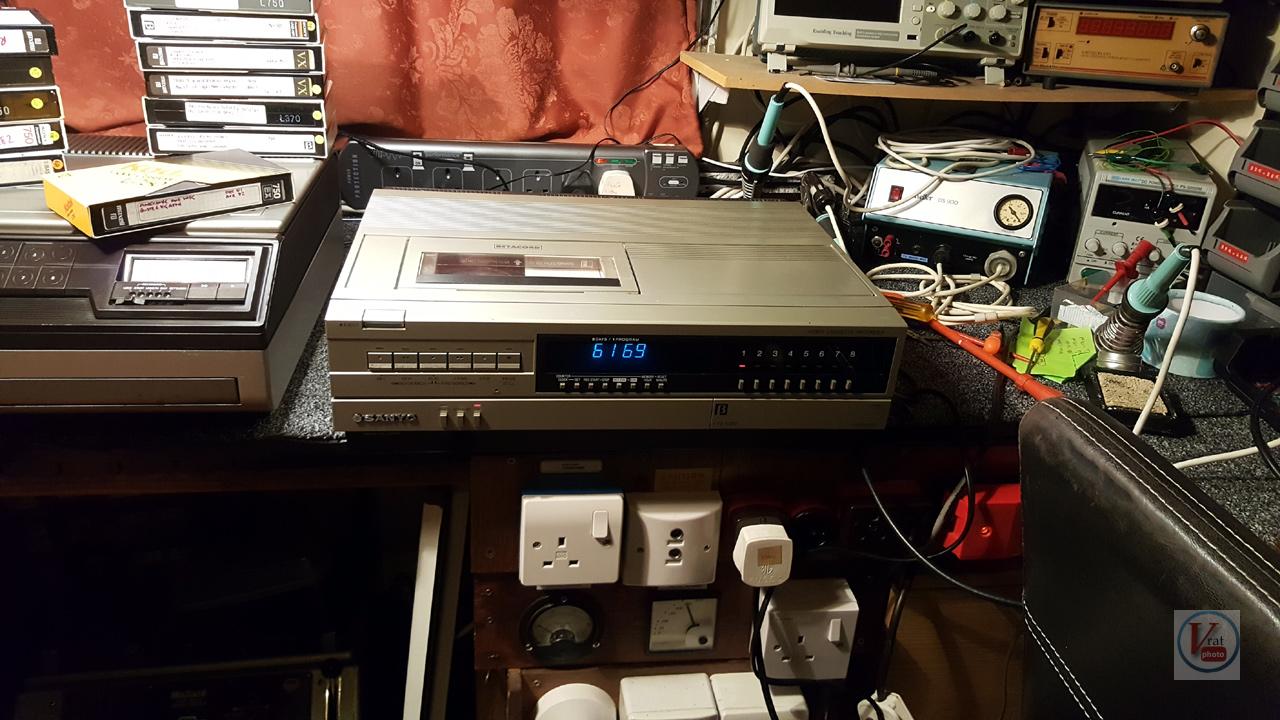 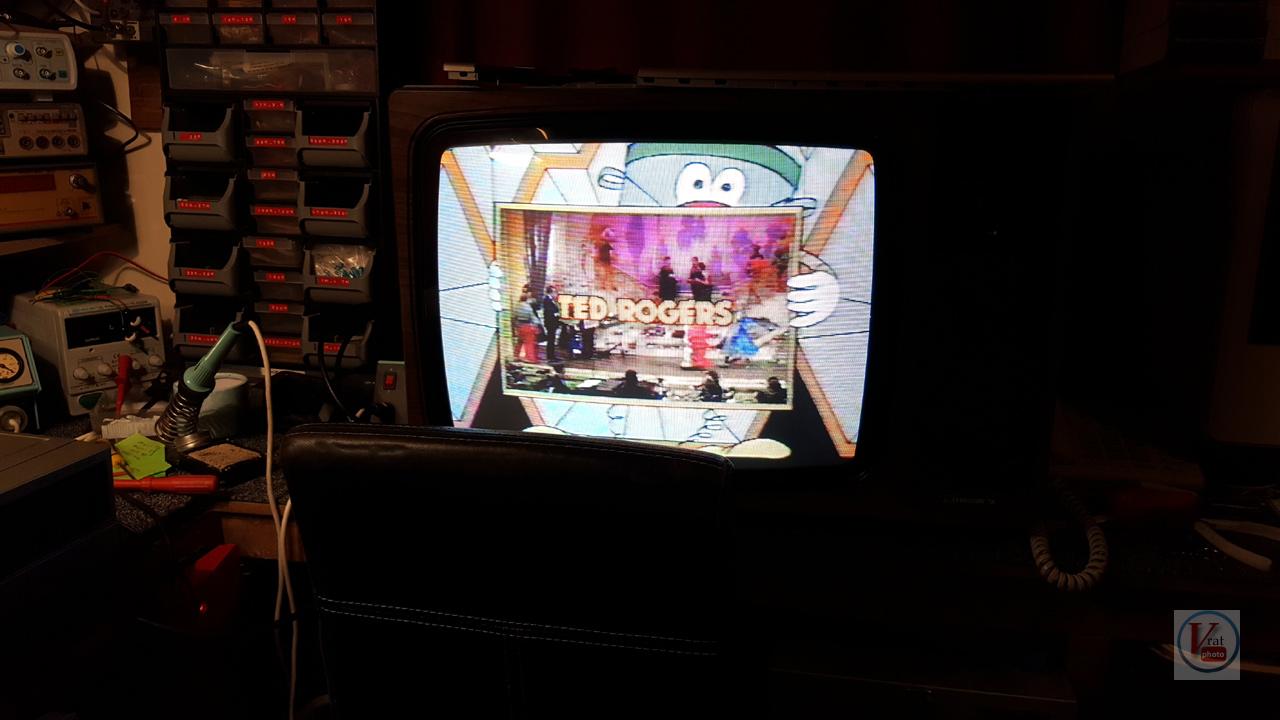 Nice to see this machine in the collection.
The Sanyo VTC-5000 was slightly unusual amongst Beta video recorders, as you have pointed out, in that the tape is unloaded from the heads unless playing or recording. This means a slight delay after pressing play or record, but the heads seemed to last longer. Some other Sanyo machines did this too. It’s also called Betacord not Betamax. Only Sony machines used the name Betamax – it seems they didn’t licence the trademark.

Another feature, the chassis is made almost entirely of plastic, making it lighter and cheaper. The VTC-5000 was the first VCR to sell for under £300 in the UK and became Britain’s best selling VCR of 1982. Unfortunately for Sanyo and the Beta format, the initial success didn’t last. Far more manufacturers supported the rival VHS format, especially Thorn / Ferguson in the UK. The market was soon flooded with cheap VHS machines. VHS offered longer recording time, which seemed to be a factor. People also wanted the same system as their friends so they could swap tapes. Whatever the reasons, once VHS started to outsell Beta, the public quickly stopped buying Beta machines. Just a couple of years later, VHS accounted for the vast majority of VCR sales and Sanyo started making VHS machines alongside their Betacord range. Sony, the inventor of Betamax reluctantly admitted defeat and did the same in 1988. However, Sony did continue to make Beta VCRs in small quantities for many years afterwards.

Nonetheless, many Sanyo VTC-5000s were in use until the late 1980s. They were reliable apart from one thing – reel drive. Sometimes the drive belt broke or the idler wheel wore out. Back in the day, these parts were common and cheap to replace – easy money for the repair shops. Unfortunately the Sanyo VTC-5000 had a design fault. When it detected reel drive failure, the machine threaded the tape around the heads and shut down. Now if there was no reel drive, the tape could not be wound back into the cassette, so when the customer tried to eject the cassette, a tangled mess of tape was left behind. Customers got annoyed about their machine eating their tapes. Perhaps this too was a factor in the Beta format’s eventual demise?

I remember my Gran had a Sanyo Beta machine about the same time as this came out, but it had piano key buttons for tape control rather than soft toch one this had.

That sounds like the Sanyo VTC-9300 , the much heavier predecessor to the VTC-5000. Piano key controls soon became unfashionable, as did top-loading cassette mechanisms. However, the VTC-9300 also remained popular until the late 1980s. It had surprisingly good picture quality.

I always thought a correctly working BetaMax gave better results than VHS, this was around 1979/80. We sold both types, the Toshiba BetaMax (sure it had the BetaMax logo) and the Hitachi VHS models.
Has Hamid states, the cheap VHS models and longer playing time let VHS take over and once there was a critical mass BetaMax was soon forgotten in the UK.

I am not surprised on the good picture quality of the Sanyo.

While Sanyo supported the Beta format, they had a foot in both camps as their subsidiary Fisher made top loading VHS machines which looked rather similar. Those were the first VHS machines I saw advertised for under £300. Unfortunately when I got to Lasky’s at about 11:00am on the first day of the “January” sales they had sold out.

My neighbours had a somewhat more mechanical Sanyo Betacord machine at one time, before they got a Samsung VHS machine. As far as Sanyo’s presence in both camps was concerned, during our Multibroadcast rental period, the last video recorder we had from them was a Sanyo – VHS of course – only chosen for the frippery of remote control programmability. I much preferred the Ferguson we had before it. Before very long we’d ditched Radio Rentals in favour of DVR, and although they supplied a lovely Decca TV, the Akai video recorders were atrocious for reliability. The Mitsubishi mono recorder we had from them was excellent, not so the stereo one I later had.