America had colour ( color) TV 14 years before us, launching their NTSC system in 1953. One of my other overriding memories and life long loves is Star Trek. I remember as a kid eagerly awaiting the next adventures that Kirk, Spock and Bones would embark upon.

I also enjoy following our American cousins repairing 60’s & 70’s CTV’s,  Shango066 and drh4683  have many hours of interesting videos, if you get a chance check them out.

Therefore mixing Trek and American Colour TV’s, I just had to share this. I will add more fine examples of their sets in due course. 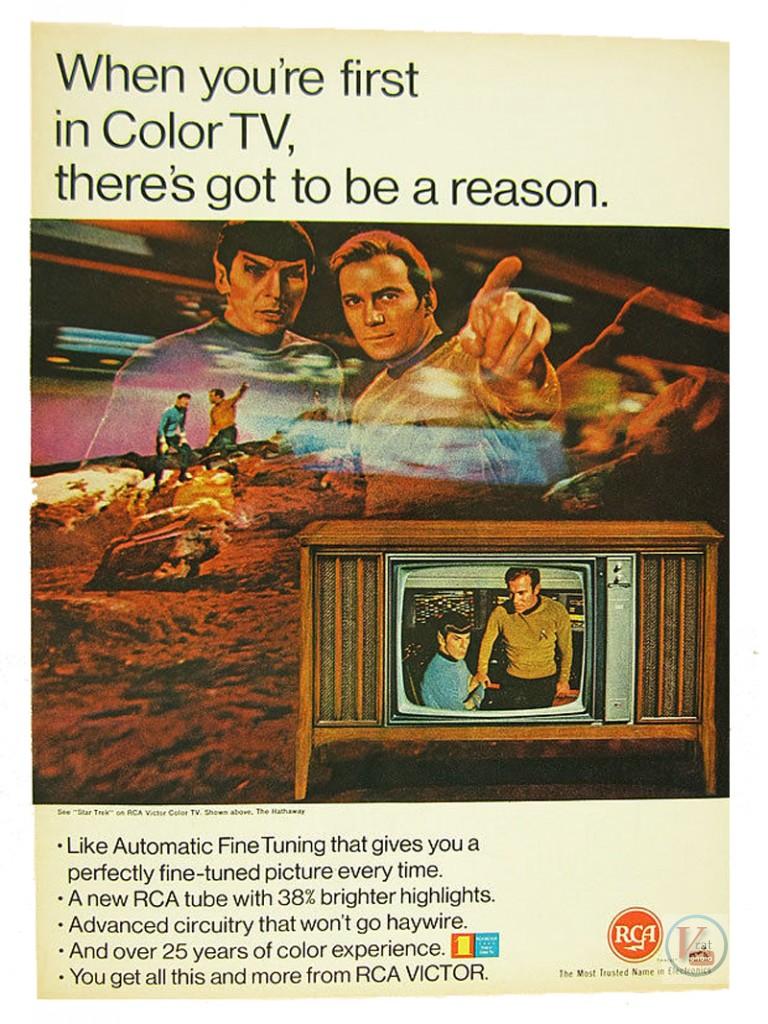 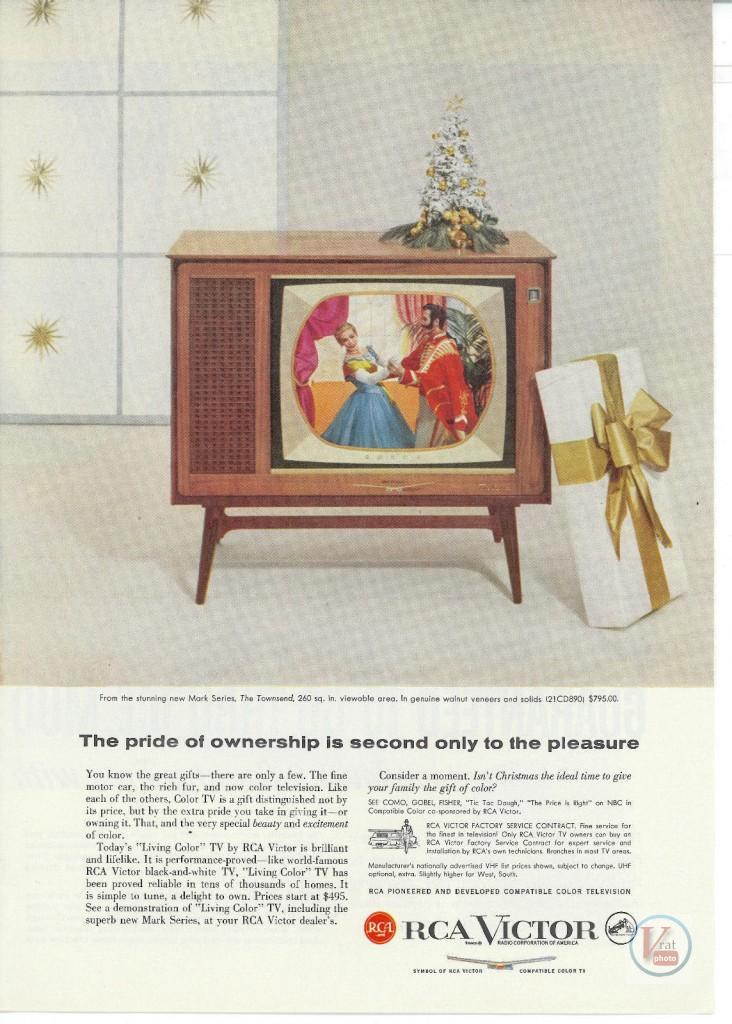 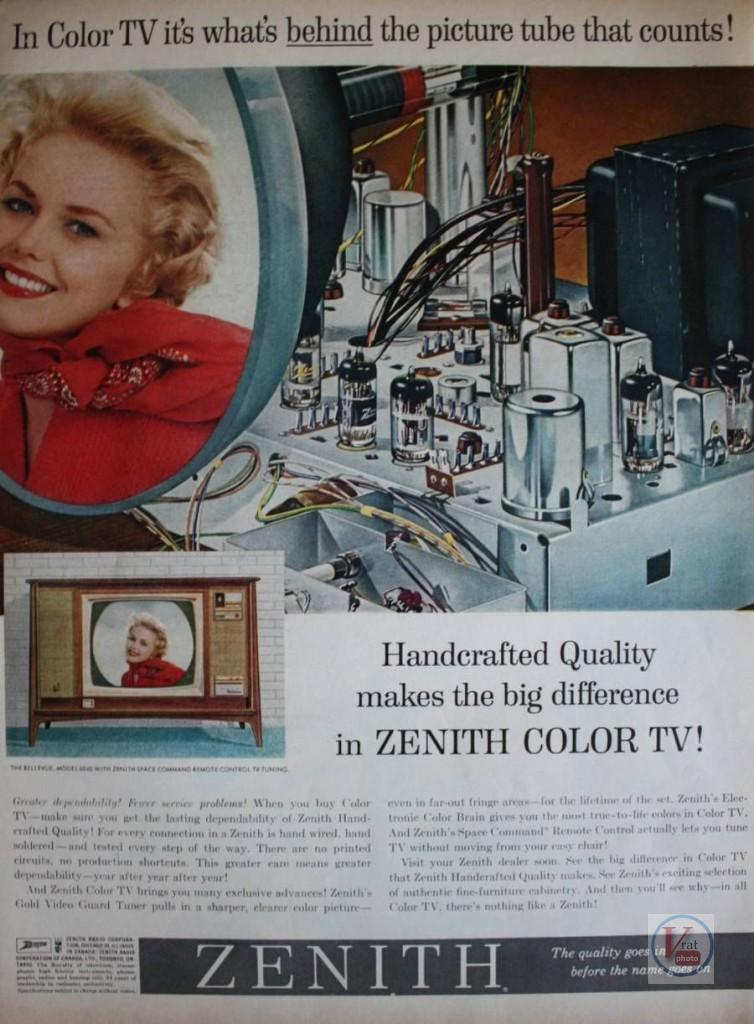 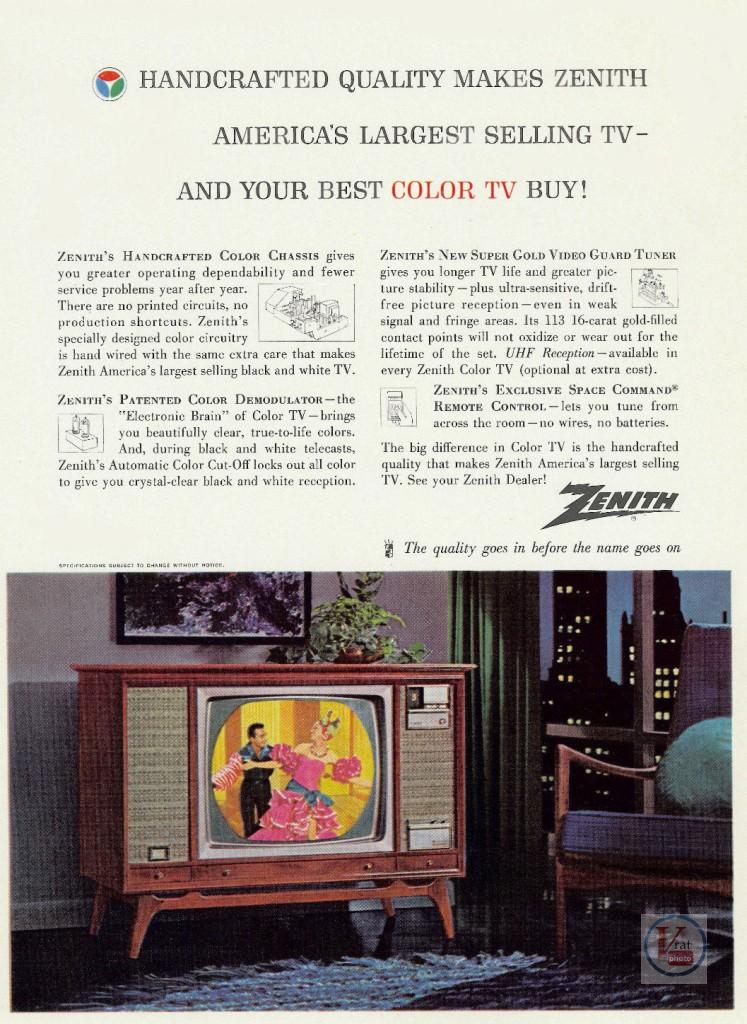 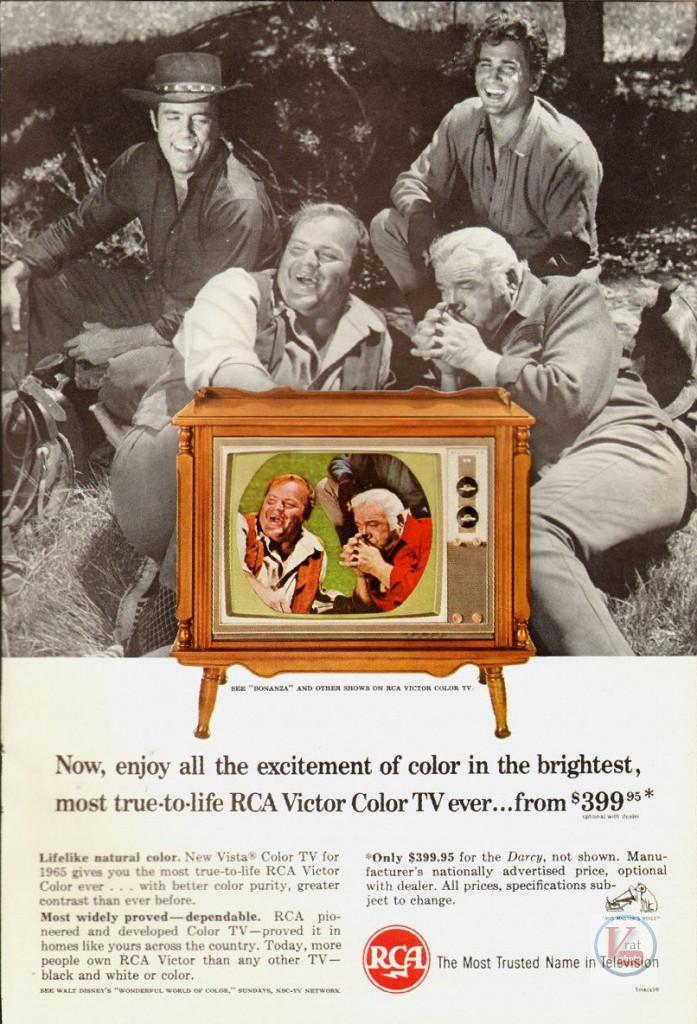 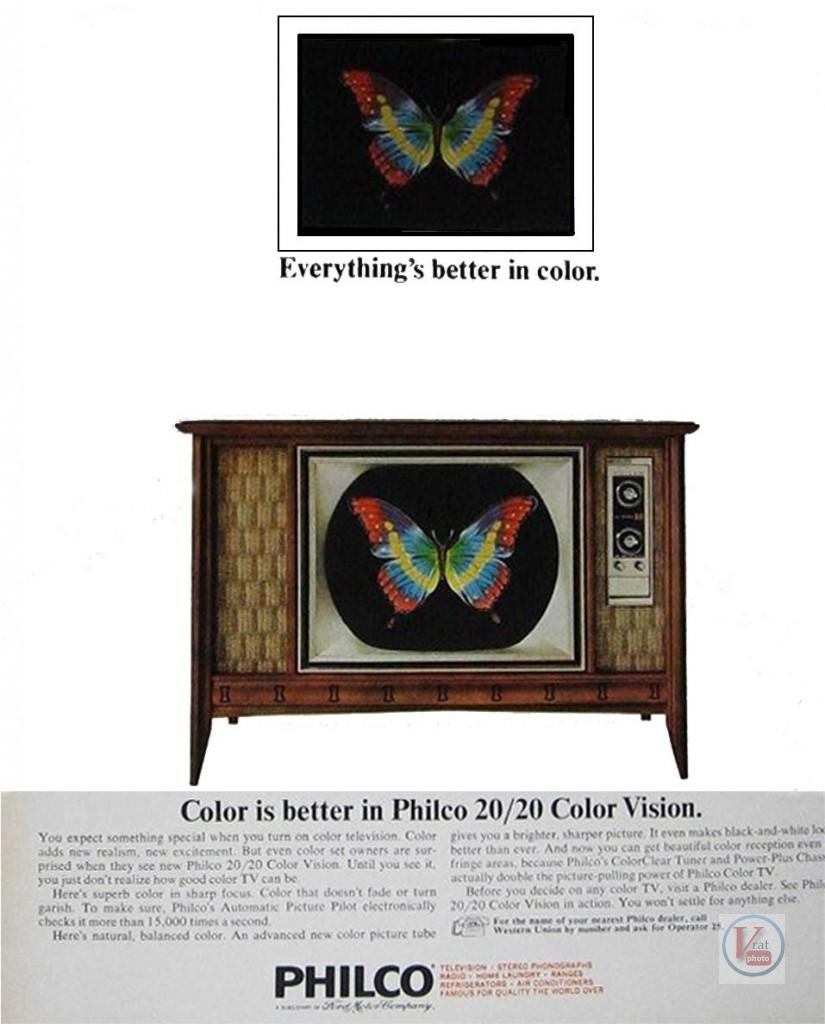 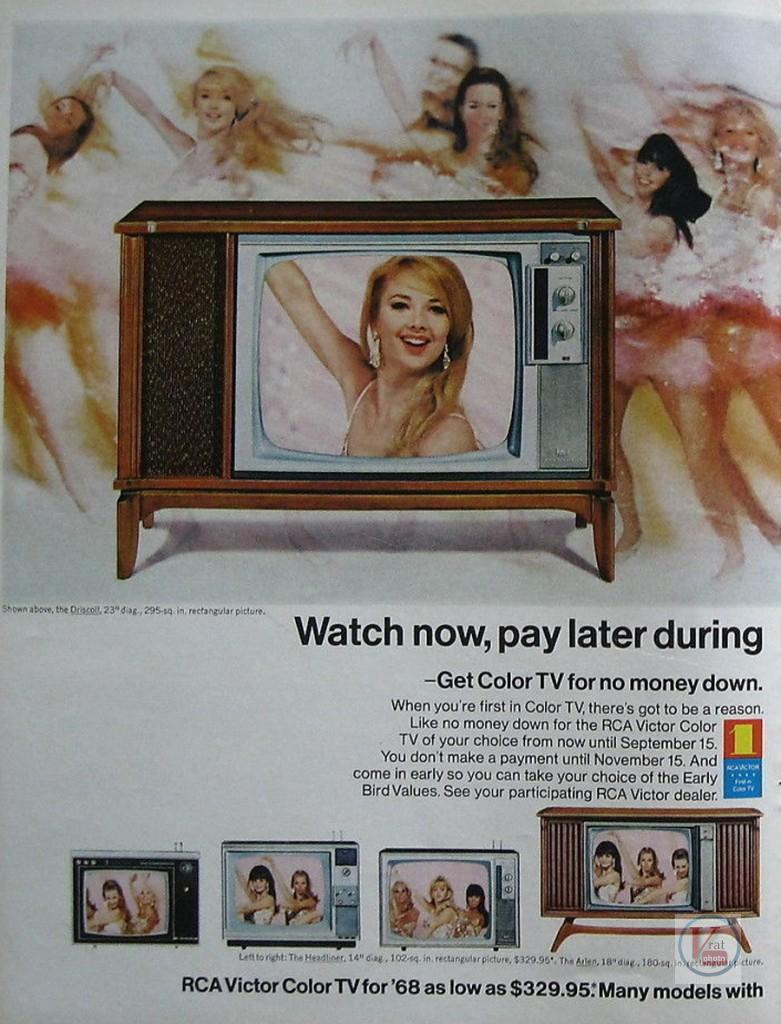 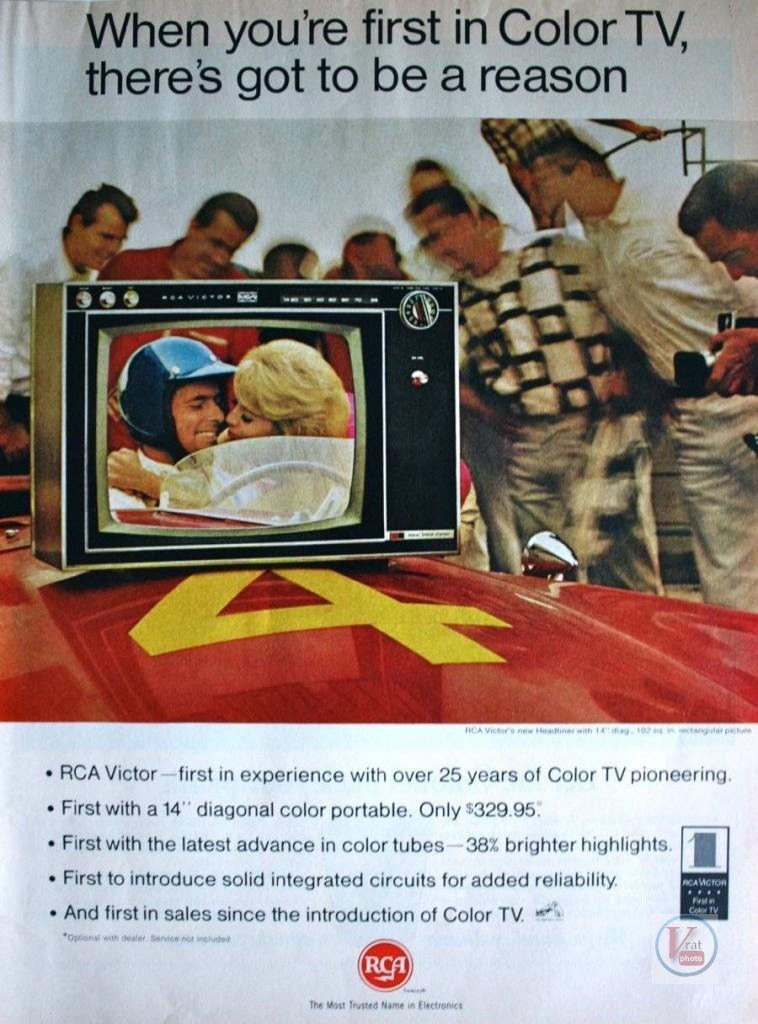 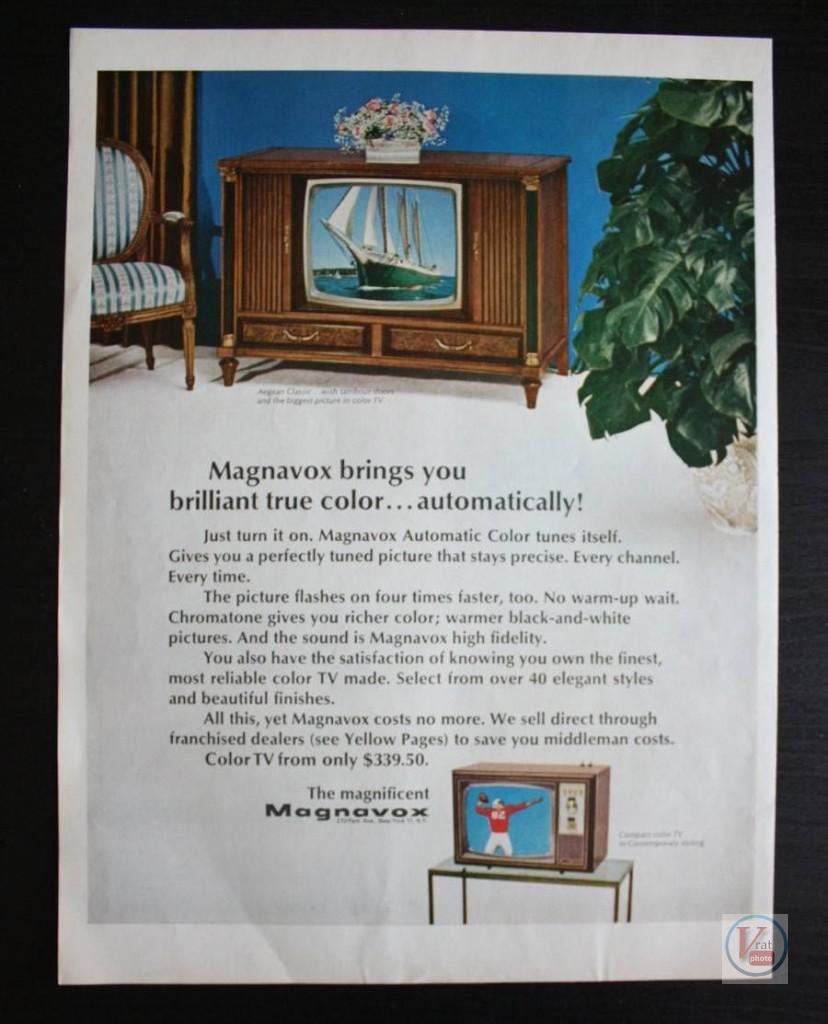 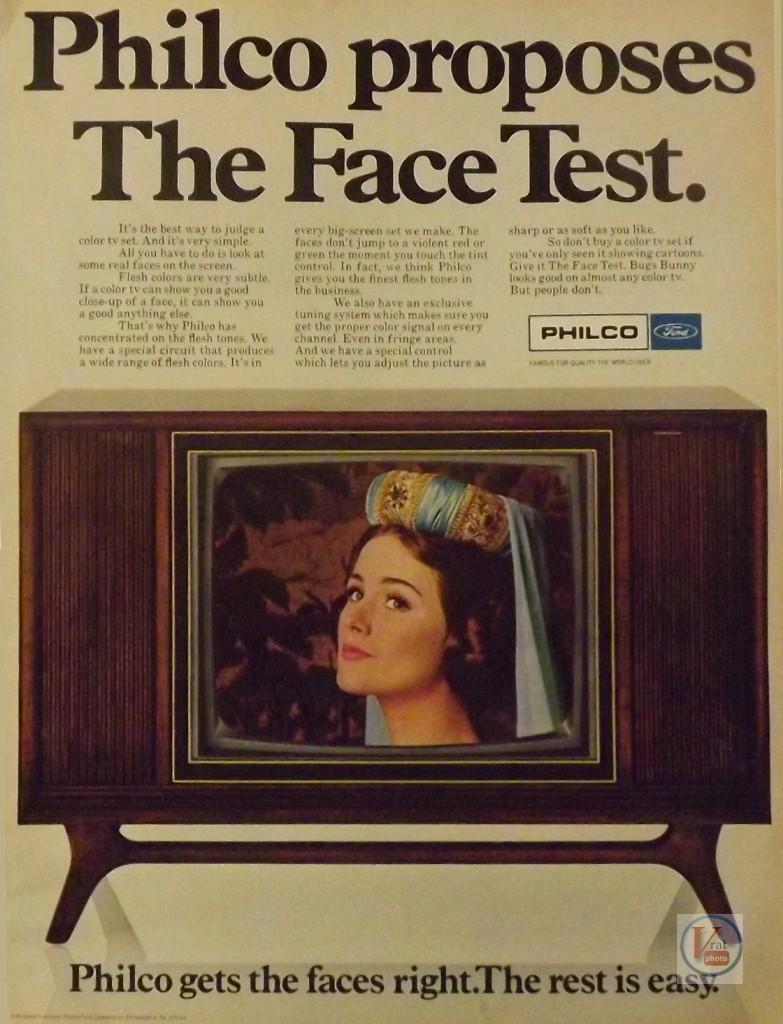 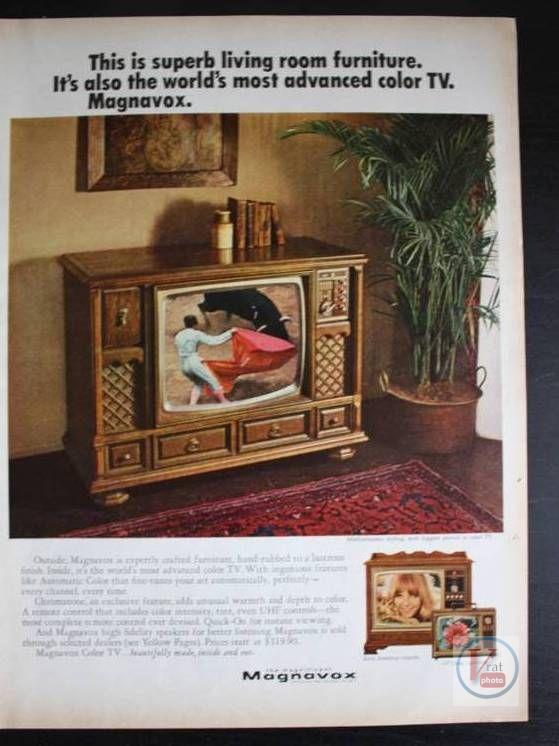 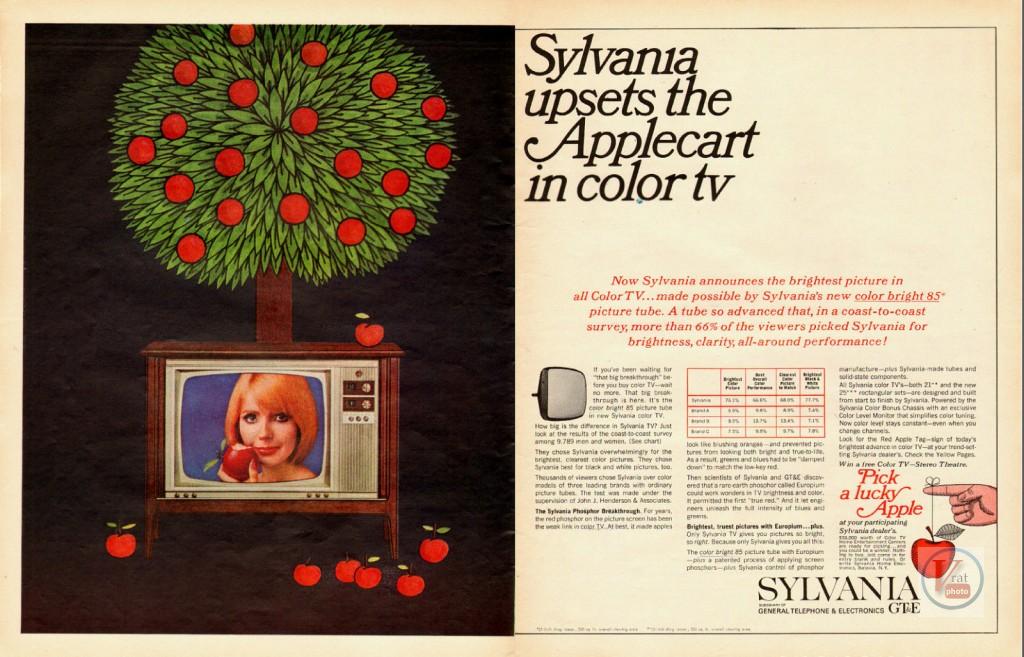 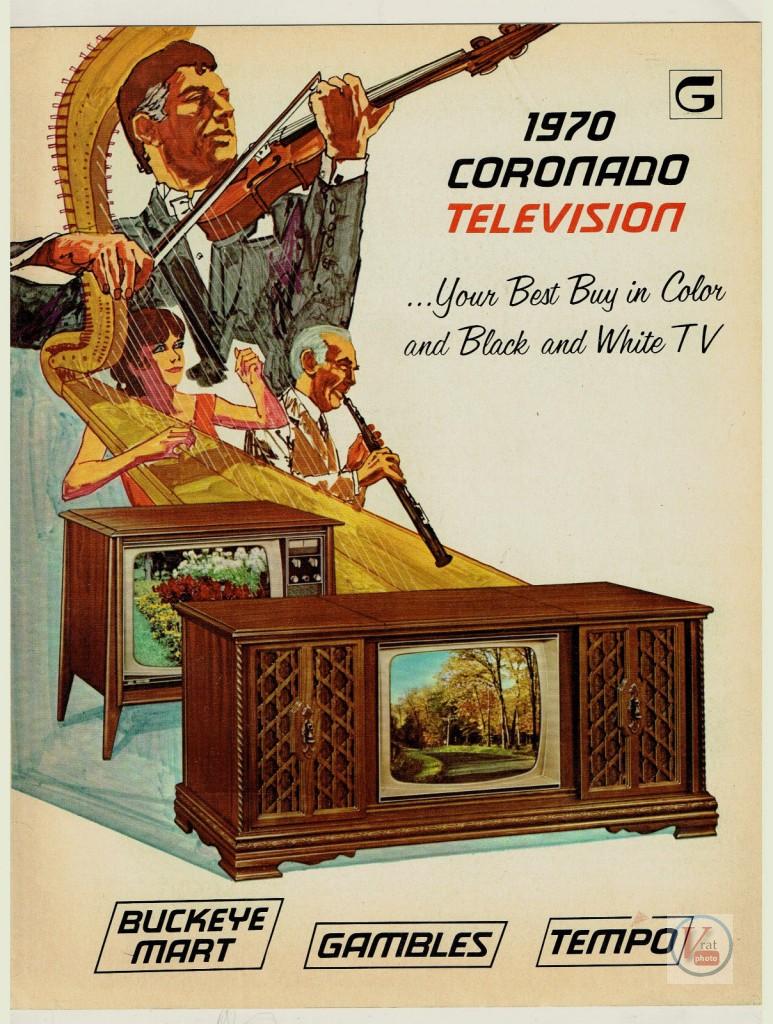 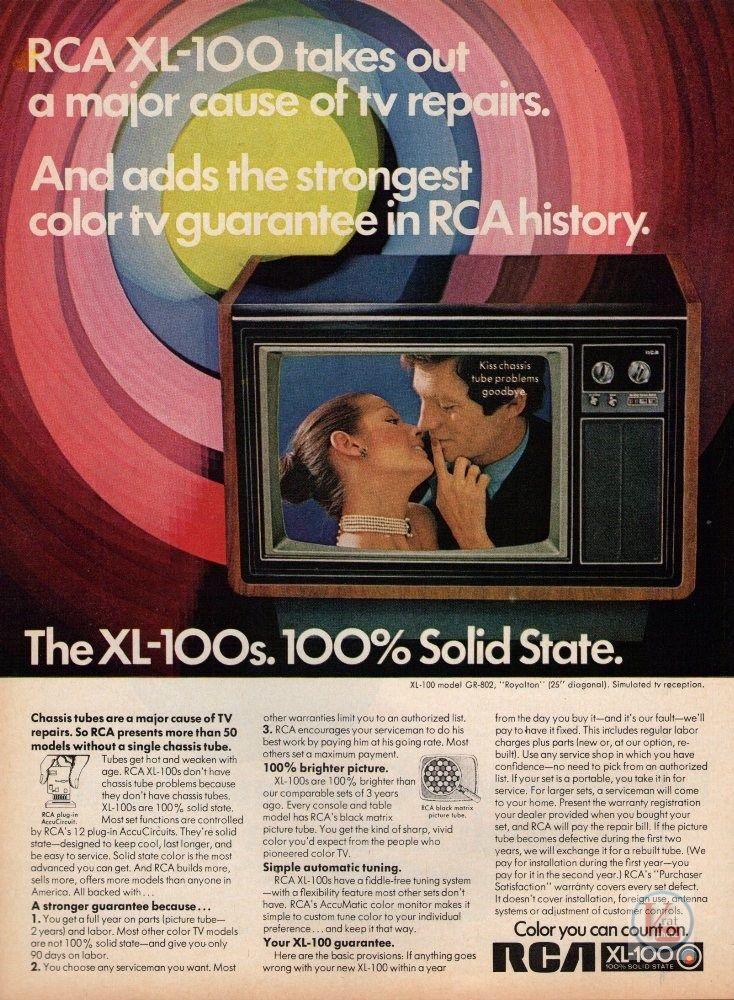 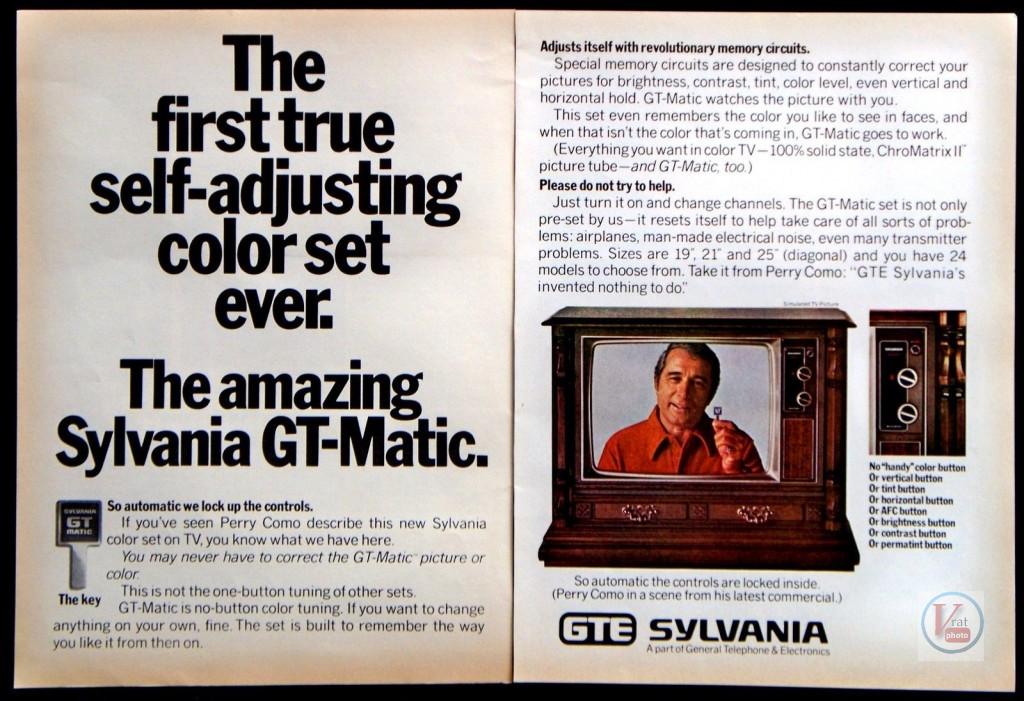 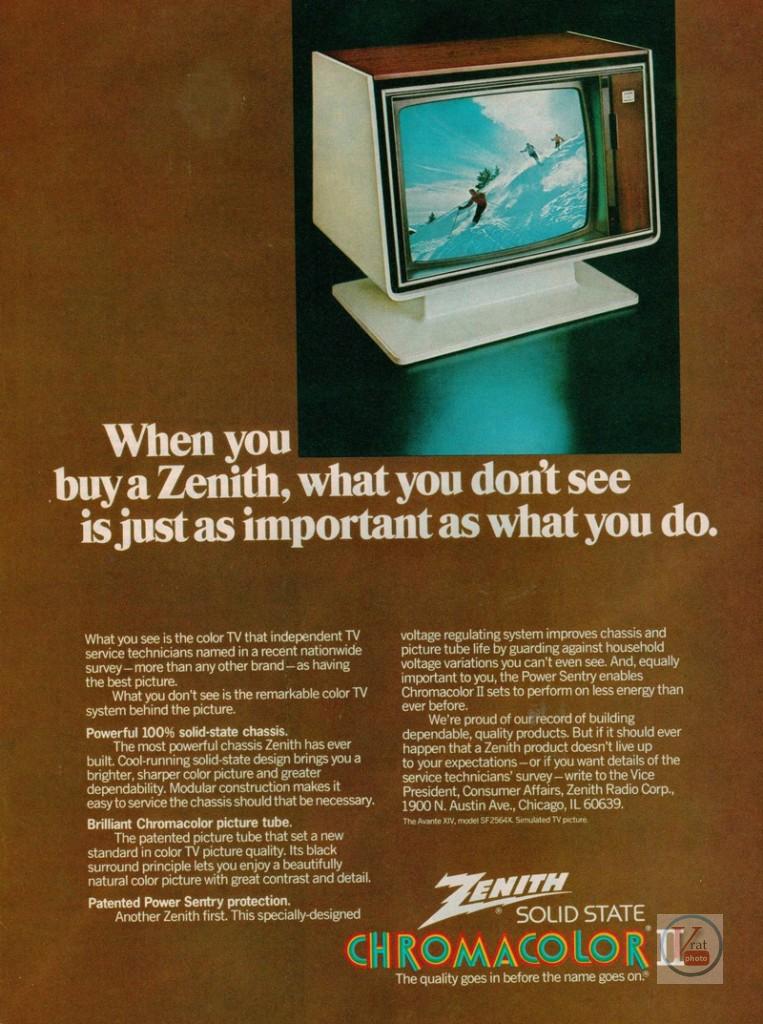 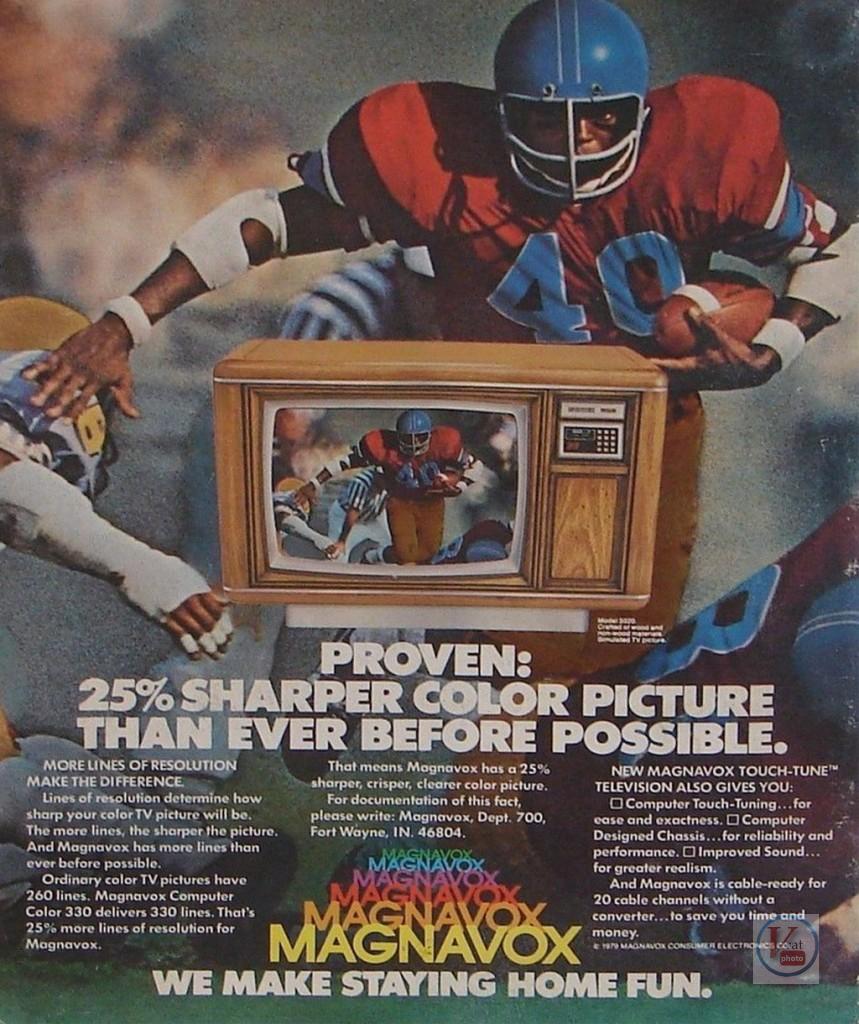 I enjoy looking through the old adverts in magazines, the ones in this post are good at showing the changes in style and design over what is a relatively short time scale.
I have a book ” Window to the Future” by Steve Kosarefff published 2005 with about 150 pages of similar American TV adverts from the 1940’s to 1970’s, obviously some are for B/W tv’s.
Cannot post any pages of it here due to copyright but an interesting book to look at.

Thanks for posting the above articles
Frank

This link is to the magazine RCA Broadcast News Jan 1954. It contains lots of information about the RCA Compatible colour system we know as NTSC.

Well worth a read.

I could not get your link to work Frank.
I think this one may be OK.
http://www.americanradiohistory.com/ARCHIVE-RCA/RCA-Broadcast-News/RCA-77.pdf

Looking at the rack mounted units in that RCA magazine which were obviously a very dark colour, reminded me of similar units in a nice bright cream colour from my days at college, studying for the C&G. Colour was on the horizon and the college bought two 21″ RCA colour sets designed to receive the UK version of NTSC which the BBC were using at the time. I was always a little suspicious of these because they were in steel cabinets(!) with a dark wood effect finish. A third set was a 21″ Ekco, which I was later tasked with converting to simple PAL!

STC had a fire at their Footscray factory. As a result, the college obtained a complete system comprising sync generator, colour flying spot slide scanner, colour bar generator and NTSC colour encoder, sold off as ‘fire damaged’ although there was no trace of any damage anywhere and was probably a neat solution for STC as to what to do with this obsolete kit due to the move to PAL.

It was massive! All valve, of course, and occupied the entire central gangway of one of the college labs! Great fun, though, and gave us a useful source of signal for the NTSC sets after the BBC switched its test transmissions to PAL. The scanner was intended for use with 2″ ‘Super’ colour slides, and the couple we had worked well but results with normal 35mm colour slides wasn’t so good.

Modifying that Ekco to PAL was a bit nerve racking as it involved, amongst other things, drilling two 16.5mm holes for two B7G valve holders for a pair of EH90s. There wasn’t much room and, of course, being Ekco, the chassis was steel which made the job that much harder. I was terrified of causing some damage to the rest of the set – not surprising, I suppose, when you are playing with a prototype set that cost north of £400. An inflation calculator suggests it’s value in today’s terms is approaching £8,000! However, the modification was successfully completed and we could watch ‘Prospect for Plastics’ et al in colour once again!

Taking the first ever City & Guilds exam in colour TV servicing the following year was like a walk in the park by comparison!

Thanks for updating the link, they do sometimes change, when I get a failed one I usually email David at the web site and it gets sorted out.

Interesting times Terry, I think the first C&G colour exam was 1968, a colleague took that , I took the 1969 exam, I took Course 48 exam in 1968. A lot of study that is worth nothing today as an exam but the knowledge gained is still worth having and served me well through all my working life.

I make the date of that first C&G colour exam a lot earlier than you might think, Frank.

I started work in August 1960 at the age of 16 and started college the following month. By the end of the first year of the 5 year course I would have been 17. Therefore, when I took the final at the end of the course I was 21.

The one year colour course carried straight on after that so I was 22 when I took the exam. I was born in 1944 so that makes it 1966 – a year before the colour TV service started. (Until I worked it out, I thought it was 1967 but I was obviously wrong!)

Hi Terry,
All can be certain of is Wigan Tech first ran the course in 1968, I was led to believe it was its first year the C&G ran it but of course I could be wrong. My colleague was born in 1944 took the exam that year, he took the final in I think 1966.

I have spent many an hour watching shango066 resurrecting old tellies retrieved from some unlikely places. His TV resurrection skills are almost magical. It also proves the ruggedness of CRT technology when you can resurrect a set that has been lying outside in a desert for over 40 years. I’d like to try that with your modern flat panel – maybe it might last a few days until the sun bleached the LCD dyes! Shango is one of the reasons I have gotten interested in CRT technology. Maybe he’s the ultimate EHS person’s nightmare – disconnecting high voltage output valve caps with his bare hands, often plunging his hands into the LOPT cage of an operating colour set with 25KV on it. His restorations have appeared on television and on film. Amazingly he does most of his service work outside!