A brace of Murphys!

I have finally got my hands on a Murphy V410 which I have had my eye on for years!
The story starts in around 1974 when a school friend and me would prowl the local tv shops for scrap sets and chassis to take apart.
We always asked first in the shop and would race around the back once permission was given so you could "bagsy" the best bits! (we were only 13 at the time!)
This particular day my mate, Dave got this Murphy. we would have probably taken it back to his and took it apart but as we trundled it up the passageway beside the shop on my go cart one of the engineers was coming out of the shop door.
He called over to us to be careful with that as it worked...
Worked? why would you throw it out if it worked? I asked, "cuz it's old" came the reply..
We got the set back to Dave's house very carefully and once a bit of wire had been strung over the curtain rail got a very good picture on BBC1.
We went on to get allsorts of sets from the shops over the next few years, But Dave hung on to the Murphy, it was his bedroom set until he left home many years later.
I lost touch after we left school in 1977 and I didn't think of the Murphy again until a saw Dave at a school reunion in 2002.
We got talking about old times and I mentioned I still had a set we had got from one of the shops, (my Invicta 7070u). " Yes" he said," I still have the Murphy"
He was the same as me and when he moved out of is parents had took the set with him and stored it, not having the heart to throw it out.
He mentioned at the time that he planned to emigrate at some point and promised me that when he did I could have the Murphy.
A few weeks back he called around my house with a Murphy 23" set he had found when clearing his fathers house, he said he was selling his house as well and moving abroad as soon as that was done.
Earlier this week he called round with the Murphy, " here we are, yours after 40 years"!
With it came a spares set he had kept, missing it's tube and valves but with a good cabinet and mask.
I have contacted Chris and arranged to buy his Murphy chassis and tube so the spares set can be saved,
The first set is all complete and looks pretty untouched inside, I asked Dave if the tube was from the spares set but he said no, that set was on it's original still, he can't remember what happened to the tube out of the spares set but thinks it may have been used as target practice for his air rifle as plenty were...

I have stored the spares set away until I get the parts from Chris.
I have put a transport request on the forum if anyone can help with this?
I dunno , you wait 40 years for a Murphy and then two come at once...

Hi all,
A big thanks to Chris for the excellent chassis and a big thank you to Mike (Cathovisor) for delivering it!
I have put the set together with the chassis and tube from Chris and the cabinet, mask and knobs from the spares set.
I now have a pristine working Murphy !
I almost feel that I have cheated somehow...

I will keep the chassis from the spares set complete, it will no doubt be useful for parts.
I know the set will be seen as a bit of a "marriage", but a complete working vintage tv has got to be better than two incomplete ones!?
I will post some pictures soon.

Sets with stories that go with them are worth far more than bidding on ebay and collecting something from a shed or loft that's been unearthed.

Look forward to some pictures.

I'm genuinely glad that Chris' "naked Murphy" has finally got a new set of clothes.

I can remember some time ago Chris posted a photo of the naked Murphy.
So it had finally got dressed now

Oh, it was wearing a veil of decency when I delivered it.... (bubblewrap).

Finally after 10 months. here is a picture of Chris's Murphy chassis with her frock on! 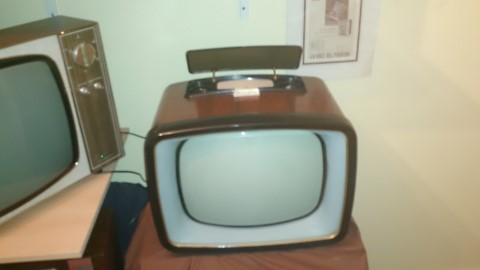 Fantastic, so glad to see the rare V410 fully dressed, a fitting end to the story of its reprieve.