To add some background to this thread, the set in question is a 20" Alba T1520, dating from 1974 and one of the few 1500s to be blessed with a wooden cabinet, as opposed to plastic. This was our family set for a few years in the mid 70s, before being replaced with a Ferguson 9000 series colour mode in 1977/8l. The Alba wobbled on it's silver legs for many years as a second set and latterly as a VDU for my Sinclair ZX81 computer. I'm sure the set went to the tip still working sometime in the 1990s. How did I ever let that happen?

Fast forward to a year or so ago and a visit to Neil in Newport who had rescued some sets from an old cellar of a shop in Bristol - correct me if I'm wrong Neil!

One of these refugees was a T1520, which Neil very kindly gave me when I told him it was a model I knew well.

The cellar storage had done the set no favours at all and any thoughts of bravely switching on were switfly curtailed after a cursory glance at the state of the capacitors. Several of the electrolytics were oozing and bulging. All were replaced, along with a couple of wirewound resistors whose legs had rusted through. I also treated the set to a NOS dropper. During this time Marc and Glenys of this parish dropped by for a visit. Marc had his tube tester with him and the previously poor reading given by the A50-120WR crt in the Alba improved markedly after a gentle clean and balance, enough for Marc to give it the thumbs up.

The first power-up of the set proved surprising, as when the line scan started the frequency sounded about spot on for 405 lines! A dim raster lacking height was obtained. Clearly the line frequency was way off. It was also noted that the initial snow visible on screen had vanished leaving a blank raster. IF trouble and a brace of dying transistors no doubt!

What EHT there was evaporated and the line whistle dwindled to something sounding not unlike the dying moments of a bluebottle trapped in a jar. My good friend Brian has VT10 the flywheel DC amp in his sights as being highly suspect. I wouldn't be surprised if all the transistors in the set turned out to be duff. I can give you a couple of voltages:

So that's where things currently stand, folks. There's also the question of whether damp ingress has affected the line blocking oscillator transformer (T1)

Steve
(With grateful thanks to Brian for his invaluable help) 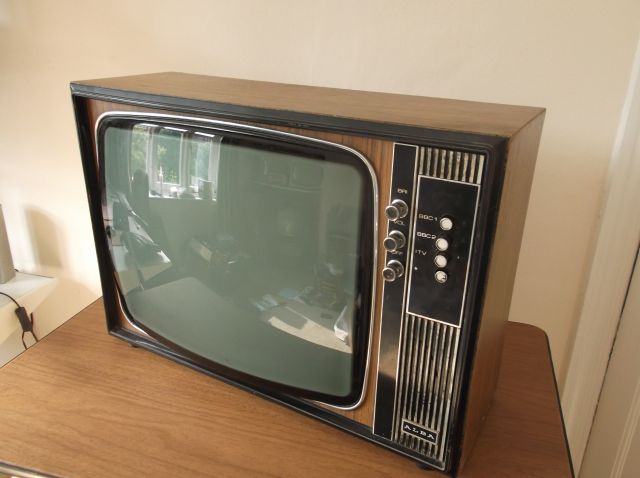 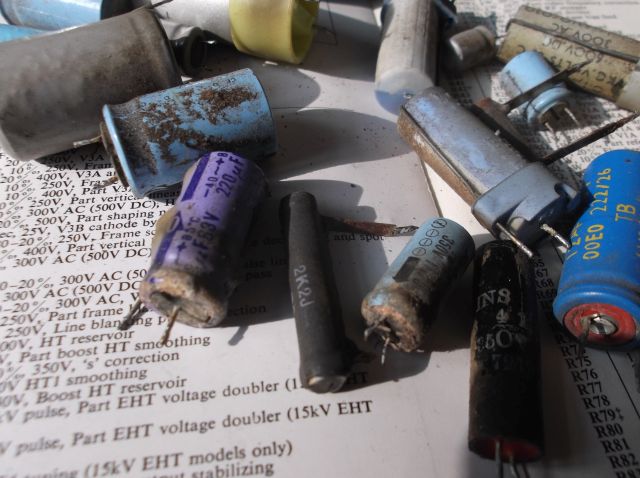 John Law's excellent article in the June 1976 issue of "Television" gives the resistance windings on the blocking oscillator transformer. Fortunately it's identical to that fitted in the 1400 series. I can send one from a scrap chassis if it turns out to be defective.
The set has clearly suffered from the effects of dampness. As Steve says all the transistors will probably be in need of replacement.
I understand the line oscillator has now failed completely with -20V from cold to 0V at the PL504 control grid on warming up.
Any suggestions, comments and opinions from others is most welcome.
Cheers
Brian

I think had it been any other 1500 I wouldn't have bothered so much, but as this specific one has 'family history' I'm prepared for the long haul. There are probably loads more faults in this set than the average 1500 would have, but at least this will prove to be a good educational exercise.

I'll check the resistance of the transformer windings over the weekend, but will meanwhile order a BC117 to replace VT10. In fact I'll order a handful of them.

Hi Steve. Actually it was taunton. and I've already had a go at two of the other 1500's replacing several caps and a dropper or two and have managed to get something out of them but they like the others will need a fair bit of fettling to get them up to scratch. and I actually had the 24" alba version back in the 80's and as luck would have it there was one amongst the pile which is now in my shed

Alba TS1520? I had loads of these on rental during the seventies. The tuner panel has the appearance of one designed for a six button tuner. One of the nicest looking single standard receivers. Well liked by customers.

Some positive progress to report. I changed VT10, using a BF257 in place of the original BC117. Result? No change. However, John Law's excellent servicing article on the 1500 in the July 1976 issue of Television mag (thanks Brian!), provided an explanation of the operation of the stages and gave me a few other items to check.

The upshot was that R61 which should be 270k had risen to nearly 3 meg. It's part of the 'line blocking oscillator time constant network'. Oddly this resistor wasn't an original, clearly having been replaced at some time. Changing it brought things back in line with a healthy negative voltage on the grid of the line output valve and, at last, a fairly normal looking raster of moderate brightness. Whilst I was at it, I thought it prudent to check R58 and R62, which, as it turned out, were within tolerance.

Unfortunately the signal stages aren't working at all at the moment, so I have only a blank raster to look at, but... it's one small step to victory!

Great news. Jon's article states VTV7 is the most vulnerable IF transistor. You never know replacing it could bring results.
Cheers
Brian

Hi Brian, some voltages from VT7: 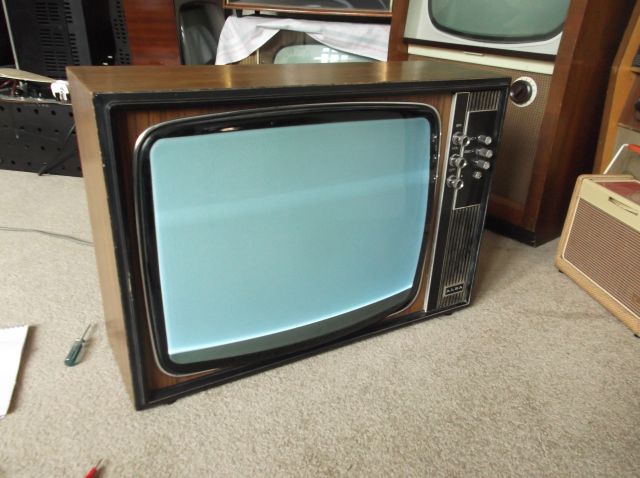 Appears to be O/C base emmiter on that transistor. Not had chance look at the circuit but that's my first thought.

Agree it sounds defective. I've had IF trouble on various sets soon after being woken following a long sleep. On each occasion the final IF transistor was the culprit.

I did not know it was the final IF transistor, this was a common fault on some Bush B/W TV's, the transistor was inside the final IFT. The sets were not 50 years old then though.
Frank

Hi Brian, some voltages from VT7:

Simple answer. For a silicon transistor operating in a linear mode - such as an amplifier - the Base should be about 0.6V higher than the emitter. Anything else spells trouble.

This may help, then again it may not

Thanks Frank and thanks Catho - pearls of wisdom duly noted!

And thank you Chris for the link to the beautifully annotated guide. That is precisely what I need.

Another update: VT7 (4th IF amp) has now been replaced, with the effect that the voltages here are now within about 1v of those specified, so certainly the original BF197 was faulty.

Checking VT8 (Video Driver) showed no volts on the emitter, so this transistor, another BF197, was changed. Catho's advice that the base should be about 0.6v higher than the emitter holds good- the base is 10.7v and the emitter 10.0v but.... the specified voltage for the emitter is 5.2v, so it's currently about double what it should be.

Twiddling the contrast control caused some disturbance on screen, so I was encouraged to try giving the set some signal. The tuner has the usual BRC problem with the buttons, but to my surprise I was able to tune it in with some degree of success to reveal that even a sickly 1500 can still produce something worthwhile, despite a partially working IF section, scratchy controls and a duff tuner.

Have to say that although success is still some way off I'm really enjoying the detective work so far! 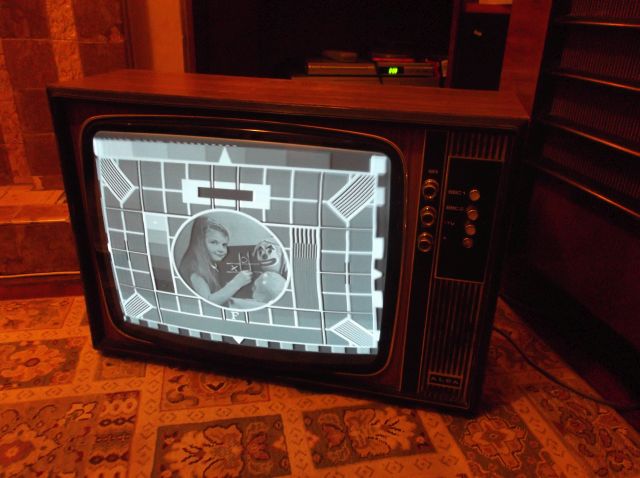 Reading what you've written, VT6 looks a good candidate for being o/c.

VT8 though is not so good. If the emitter is that high, twice the current there should be is passing through the emitter which will pull the collector voltage down correspondingly, unless there's summat clever going on... I'm going to assume the map for this is in the library; I shall take a peek at it tomorrow as now, it's bedtime!

That's a great result seeing how poorly the set was when we first powered it up! I was kindly given some transistors by another forum member which I'm sure includes a BF195 which should replace the BF194.
I'll have a look later.Unfortunately I can't seem to find the UHF tuner that would've been ideal for substituting the p/b switch bank. Sure I must have it somewhere.
Cheers
Brian

That picture of the test card looks good, does it have AGC on VT6? If it does check the voltage with and without signal, these sets very often used forward AGC, I.e, the stronger the signal the harder the transistor is turned on, lowering the collector volts. See what signal conditions are quoted in the manual for various voltage readings.

It is just a thought, the transistor could still be faulty but worth a few minutes checking.

The high voltages around VT8 were down to R136 having doubled in value. Reading the John Law article led me that way, but Catho has confirmed it. Sure enough, replacing R136 brought the voltages back to where they should be.

VT6 is certainly looking ill and I've also no sound (although the PCL82 stage is working), so the sound IF amp, another BF194, may be worth a visit.

The Mazda crt is improving all the while, no doubt thanks to Marc's clean and balance.