I tend to treat all those 'lokfit' transistors with suspicion. Those and the BC14x all seem to be suspect. They didn't seem to have much of a production run and soon were replaced by alternatives in 'standard' packaging.

I'd certainly have a look around VT11 (the Lokfits in this set do not seem to be covering themselves in glory ATM), but also the 82pF coupling cap (C36) from the video driver and the stabilising cap C65 (4µF) as well for a lack of sound.

I don't think this poor old thing has been in use for years. I must be still in my 1980s mindset, when all thse b&w hybrids were ten a penny in the 'reconditioned' telly shops. It seems quite odd to be having to do so much work to get one of them up and running again. I'm finding it very educational. Good fun too, as like almost everything else we like to tinker with, it's 'Beyond Economic Repair'. And then some.

Will check C36 and C65 by substitution, if I've got them.

Slightly better photo attached of the current state of play. 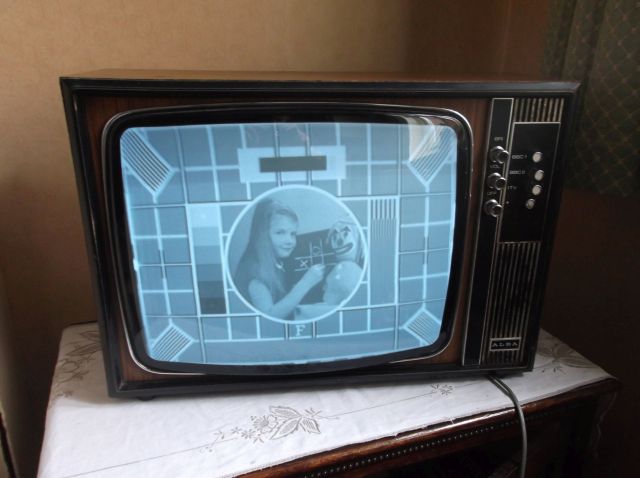 Good to see you found one of these sets! Yours looks good so far

I think I must have been lucky with mine just needing a few capacitors and a couple of resistors to get it going.

It's strange I have a couple of Thorn 1500's both had multiple faults, one set was particularly nasty with all the 1500 common faults and some! I wasn't expecting that as I have had three 1400's that had hardly anything wrong, the usual tuner clean and a cap or two was all they needed.
The 1500's were almost rebuilds in comparison, maybe they had seen a lot more use?
Well done getting this one going it looks well worth the trouble. It's funny you mentioning how cheap and plentiful these sets were in the early 1980's. I thought the same when I struggling with mine, I can remember buying a whole room full of ex rental monos for £2 each. A Most worked, I didn't try too hard with the ones that didn't if I couldn't fix it in about half an hour with bits from the scrap pile it went On the pile!

My mum wasn't too happy when she came home to find a row of sets three high stacked on their ends all down the hall...
Rich.

Good to see you found one of these sets!

Hi Lloyd- yes I remember asking you some time ago whether you'd ever consider selling your Alba T1520. Everything comes to he who waits, it would seem!

Just ordered a couple more transistors, so there should be some further progress to report before long.

I agree Steve, the thread title should be changed to what you suggested.
Ni doubt you'll have a perfectly working 1500 soon. Pictures were never brilliant but they were/are excellent sets. George Wilding agreed when I discussed them with him.
Cheers
Brian

Following on from Brian's suggestion, I thought it'd be better to split the thread and rename it: all subsequent posts will now carry the new title

Probably going against the flow here but I was never over keen on the 1500, or other Thorn B/W sets, the only thing I would say is that they were always easy to fix. I know there were a lot in use with the rental market and the Jellypot has stood the test of time, but that was my thoughts when they were in service life.

Still the chassis is an icon for the shear number made and good to see one working again.

Yes, it amazed me how these and earlier Thorn b&w sets can still function reliably 40-50 years after they were made. This is certainly not true from some other makes of the period which perhaps did function better when new.
Perhaps the 960 portables are an exception, but had I replaced that dropper capacitor on sight would've saved a lot of problems I encountered later.
Brian

One thing to watch for on the 1500 is the high value dropper section going o/c. I think it is 1.5 k on early sets and 1.7K on later models
If that section goes o/c the L.T voltage goes sky high and usually takes out most of the transistors excepting the ones in UHF tuner thankfully.
I had a few sets that had suffered that fate, If I refurbed one for re-rent I always fitted a new dropper. They usually had a section or two fitted with 'Polo mints' by then so needed changing anyway really.
I saw a few sets that had a brown line burnt on the tube face due to drys on the frame transformer customers just got used to giving it a thump when the frame collapsed but then there was always the day they left it running unattended...

The 20" Mazda tubes seemed a lot more prone to screen burns than the earlier 19" tubes. I saw quite a few 'game burns' on 20" tubes, one particular make of the Tele tennis game was almost sure to burn goal outlines on the screen if the set was run at high contrast and brightness levels. Maybe the phosphor was thinner or cheaper on later mono tubes?
Rich.

I don't think any of the last of the larger mono CRT's were up to scratch compared to the ones made earlier. Focus/astig and emission just did not seem as good. Cannot comment on reliability, sold/rented very few. I think they were imported not UK made, someone may remember a bit too long ago for me.

From my own experience, I once had a BRC 1400 chassis, Ferguson with 20" screen, which I sold on to my younger brother when I acquired a 1500 chassis version.. That was a big mistake in my eyes - softer focus overall, and absolutely pathetic at the edges.. Geometry was so poor I actually thought the set had been set up by a school leaver on day release and the sound quality just 'wasn't there'.

Overall, I got the impression that the set was pretty much thrown together rather than assembled, and there was scant evidence of 'due care and diligence' on the part of the assembly line workers.

For a chip shop TV, or even a pub TV for that matter, it was adequate, but was poor excuse compared to the 1400 it replaced - the only good feature I can remember was the absence of intercarrier buzz that plagued the 1400.

I don't think any of the last of the larger mono CRT's were up to scratch compared to the ones made earlier.

In professional equipment, tubes like the A61-120W and the A50-whatever could give very good results. Used to be used as floor monitors in their 24" guise before domestic colour TVs with isolated chassis became freely available.

I don't think any of the last of the larger mono CRT's were up to scratch compared to the ones made earlier.

In professional equipment, tubes like the A61-120W and the A50-whatever could give very good results. Used to be used as floor monitors in their 24" guise before domestic colour TVs with isolated chassis became freely available.

The earlier A50/A61 were good, its also possible that the domestic market were fitted with a cheaper lower quality product than professional equipment, in fact very likely.

Not sure if the 20" ones were likely to have expensive Illuminant D tubes in them (often made by Brimar) as they would be used as camera preview monitors; but the 24s? I genuinely don't think the CRTs were anything other than the standard "off the shelf" product. Certainly in the days of the older Grade 1 colour monitors (Melford DU1/Prowest PM2), they were standard Mullard A56-120Xs.

Mike has a point there maybe the poorer pictures and shorter life was down to how the tube was driven by the chassis rather than the tube? In my experiences the Mazda tubes were the worst in general but Mullard failures were also fairly common. for some reason the Philips 210 seemed to have a shorter life with a Mullard tube than most other makes.
The problem is that as time passed it seemed you couldn't rely on the Mullard label being a Mullard tube some it seems may have been re labelled imports.
My mate had a very late Marconi 1500 with a purple labelled A50-120W, the set was very clean and low use but the tube still wasn't brilliant definitely not an old school Mullard!
The usual story! Produce something good, then slowly cut the quality and trade on previous reputation until the buyers twig which sometimes takes years. we see it all the time these days. it has even spread to some car makers.
Rich

A bit of an update on the Alba: I have a couple of BF184 transistors which I believe are suitable replacements for the suspect BF194 lockfits VT6 (3rd IF amp) and VT11 (sound IF amp).

(I should really put the above info into a table for better legibility but I can't seem to fathom how to do it!)

The Law of Cathovisor (see further up the thread) decrees that "thy base shall be 0.6v above that of thy emitter'

More to the point, what did you do with that shield connection on the BF184?

I left it floating in the breeze for the moment, ensuring it's not touching the body of the transistor or anything else. Presumably it can be snipped off if not required... or is that a tremendous no-no?!