From what I recall, Yorkshire TV started in the summer 1968 and the mast fell down March 69, I think the loss of revenue through a smaller service area until the new mast was constructed gave the very young Yorkshire TV a few financial headaches.

You are correct, Frank - it was 9th July 1968, to be precise and the Emley Moor collapse was the following March.

Apologies to all for the error and thanks to Frank for the correction.

I wonder how much smaller the service area was with the temporary Emley Moor mast? Wonder if those who lost signal had only BBC1 or did they get a snowy ITV picture from another TX?

I wonder how much smaller the service area was with the temporary Emley Moor mast? Wonder if those who lost signal had only BBC1 or did they get a snowy ITV picture from another TX?

We were unfortunate enough to have only Yorkshire TV and BBC North, just Nort of York.. Belmont was just simply too far away, and Winter Hill, though in theory should have been readable, wasn't - ironically, when we moved to the East Riding Of Yorkshire, Winter Hill was further away than before, but was watchable from time to time, and Belmont was consistently available but very low strength.

A point to remember is that when the mast went down Yorkshire TV transmitted on VHF ch 10 but at the end of 69 colour transmission started. Yorkshire TV had spent a lot of money equipping their studios etc for colour. They were the poorer funded consortium that won the bid against Telefusion who had more cash. Yorkshire TV won because rightly or wrongly it was thought they would do a better job programme wise.
After spending all that cash, the first 18 months would be VHF B/W only, they must have been counting on a big audience for their colour programmes and hence income from advertisers.
When colour came to the BBC1 and ITV, the demand grew quickly, getting stock in the first 2 years was sometimes not easy.
I am not sure about how much the coverage was reduced but it was a large drop, time for a bit of research, I may find something.
Frank

Apparently not, according to this Wireless World item.

It's possible that the mast at Holme Moss would not have coped with extra loading, that just a suggestion, the other point is all the transmitting equipment was still at Emley Moor. I would have thought that that the site owners would have wanted to put a signal back ASAP, a small mast and aerial could be connected to the transmitter on reduced power reasonably quickly.

There could have been some contractual or legal reasons for a quick return to transmission, even with less coverage, another item to research.

Here is a bit more on that topic.

As a rough guide, one needs about 3 times the effected radiated power at Band III to get about the same coverage as a Band I transmitter at the same site, and even then the Band I signal will likely go further, depending upon the topography.

In the UK, it looked as if ITA used some rather high erps by Band III norms.

Hi Colly,
I misunderstood your post by the look of it, I thought you meant as a temporary arrangement.
Steve has provided lots of info on your post, reading for later, the gardening beckons.

Hi Colly,
I misunderstood your post by the look of it, I thought you meant as a temporary arrangement.

Yes, Frank, I believe you did. My understanding of Colly's comment "Just that most other BBC/ITV masts are usually co-sited" is that he was referring to the original ITV roll-out, when there is no way that an ITA aerial would have been permitted on a BBC mast!

The use of 'co-sited' is probably the cause of the confusion - it certainly doesn't mean mast sharing but does imply two masts on the same site, which is not correct! Adjacent siting might have been a better choice.

The ITA did, however, try, as far as possible, to site their transmitters as close to BBC sites as possible so that it simplified matters for the majority of viewers using directional aerials for both bands. Thus, although the BBC was still using Alexandra Palace when London ITV started in 1955, they chose Beulah Hill (aka Croydon) for their transmitter as it was close to the Crystal Palace site that the BBC were adopting from 1956.

Other geographical pairings include Rowridge/Chillerton Down and Sutton Coldfield/Lichfield and there will be many more ...

49. Existing V.H.F. sites and masts will be used to the fullest possible extent, but many new U.H.F. stations will need to be built. All U.H.F. programmes for the same area will be transmitted from the same sites and masts, as indeed the Committee recommend.

Frank
Edit. good information about the concrete mast and the extra relays required due to its lower height than the tubular mast that fell down
http://ieeexplore.ieee.org/xpl/login.js ... %3D5262336

Some more information about temporary mast etc, thanks to Americanradiohistory , all small snippets.

Here's a BRC 1400 VHF tuner from stock with its allocations. 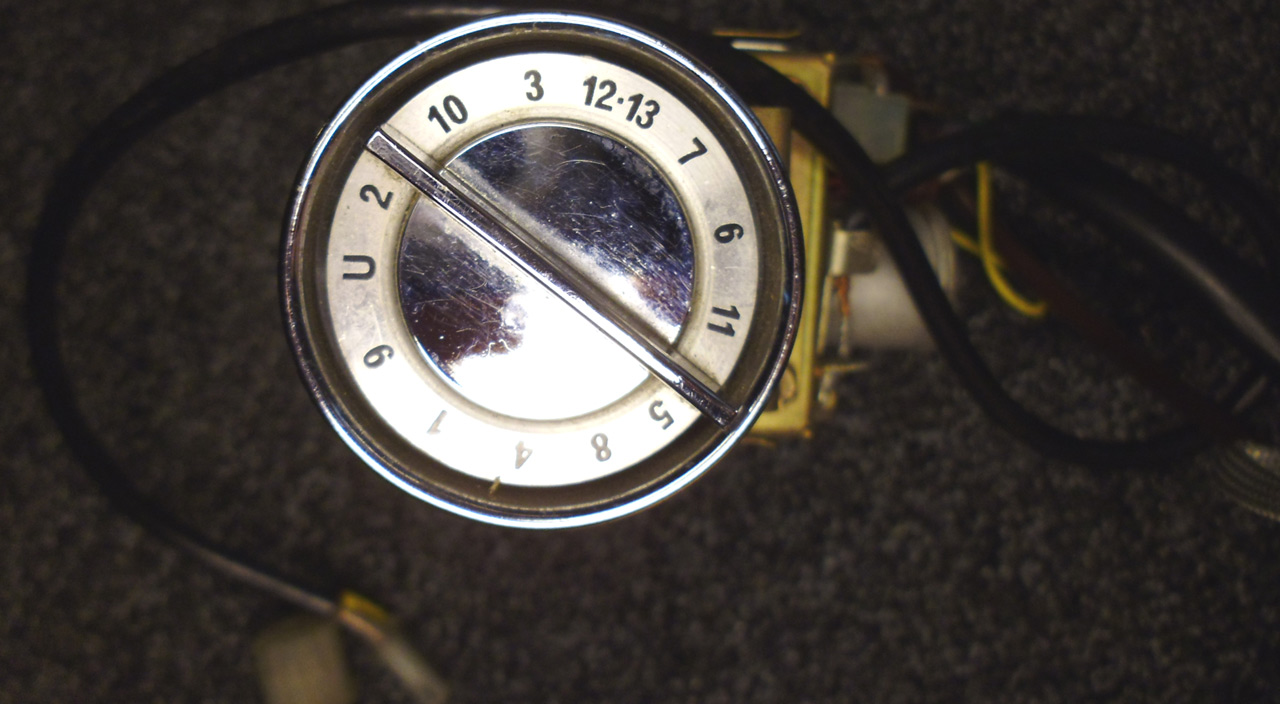 Was a bit awkward in Devon with North Hessary Tor on ch2 and Stockland Hill being on ch9.

To get to the two quickly meant a quick 625 change over and back!

A 1400 I had originated in Devon. The middle (grey) lead had been cut at the microswitch to prevent this from happening!

Returning to the Holme Moss issue, of course it could have provided closely similar coverage for two VHF channels if both had been in Band I. Had the channel planning been done differently, without the initial (mis)use of Band III for non-broadcasting purposes, one could make the case that two Band I channels should have been allocated to Holme Moss, with perhaps some of the second-level transmitters moved from Band I to Band III for the 1st programme.

Holme Moss is somewhat analogous to Te Aroha here in NZ, although the latter is atop a mountain peak in rugged country. But neither is located in a major population area, but rather both broadcast to lower-lying populated areas either side of the divide upon which they were sited, in the Te Aroha case the Waikato, including Hamilton, to the west, and the Bay of Plenty, including Tauranga, to the east. Te Aroha was the only one of the seven main transmitters to use Band I for both channels, namely channel NZ1 for TV1 and channel NZ3 for TV2. The other six used a Band I channel for TV1 and a Band III channel for TV2. So when the channel allocations were made, the special needs of the Te Aroha transmitter, which had a larger footprint than the other main transmitters, were evidently taken into account. As I recall, second-level transmitters tended to use Band III channels for both TV1 and TV2.

Nonetheless, early BBC planning for two-programme national VHF TV coverage did include a Band III transmitter at Holme Moss, as shown in this excerpt from WW 1953 June. I imagine that the coverage from such a transmitter would have fallen noticeably short of that obtained with the channel B2 transmitter.

And the following shows that for its 1st programme, the BBC originally envisaged using two Band III channels for some of the second-level transmitters. But it had to rework these to use Band I channels, and so Band I ended up being over-subscribed.

Then this item suggests that co-siting and even co-masting of the ITA and BBC VHF transmitters was considered in the early days. The BBC had included provision for Band II FM radiators on its masts/towers from Sutton Coldfield onwards, and I think (not 100% sure) for Band III TV radiators from Pontop Pike onwards.

I suppose we were the only Country that had channel out of sequence rotary VHF tuners, unless someone knows different..

I have never come across any information to suggest that non-sequential VHF tuners were used elsewhere, but that does mean that they were not. The UK situation may have been unusual in terms of expected programme availability back in the VHF-only days, coupled with a high proportion of rented rather than owned receivers, such rented receivers probably not moving between districts with their renters, and maybe a lowish level of population mobility anyway. With owned receivers and highish mobility, as say in the USA, being able to receive all available channels in any district would have been a key requirement.

The BRC 1400 dial pictured would, as originally configured, also have been problematic in Lancashire - 12 is rather a long way from 9, and U intervenes between 2 and 9 - so I'd have been looking to have them put all together had I had one. All this was, however, pretty much immaterial in my day as all three channels had gone 625 by then.

What tuner did the 1400 have, one with biscuits could easily be changed but fireball tuners, used in many Thorn sets, were fixed when manufacturered.

That channel numbering in that picture would definitely have been a pain to use in Lancashire.

Not all areas conformed to accepted markings. Central Scotland from Kirk 'O Shotts & Black Hill was 3 & 10, Black Hill was at One time the UK's most powerful band 3 transmitter. We also had channel 2 from Carrick Hills & 12 horizontal from Lethanhill to serve Ayr and south Ayrshire.

The BRC 1400 dial pictured would, as originally configured, also have been problematic in Lancashire - 12 is rather a long way from 9, and U intervenes between 2 and 9 - so I'd have been looking to have them put all together had I had one. All this was, however, pretty much immaterial in my day as all three channels had gone 625 by then.

Yes, the 12-13 position could be adjusted to either ch12 or 13. Interestingly, this position gave RTE on 625-lines in Devon!

Frank- the 1400 VHF tuner is indeed the detachable "biscuit" type. If one wished to do so they could be re-arranged but won't tally with the dial markings of course. Useful to have chs 1-5 in a one click sequence for DXTV for example.

As for the Holme Moss/Emley Moor and Winter Hill discussion I agree a single BIII transmitter wouldn't have sufficed. In Chippenham we were completely cut off to the North, so much Sutton Coldfield ch4 was impossible to receive and that was in BI!