I've just taken the back off my Thorn 9800 and I noticed this on the CRT neck... 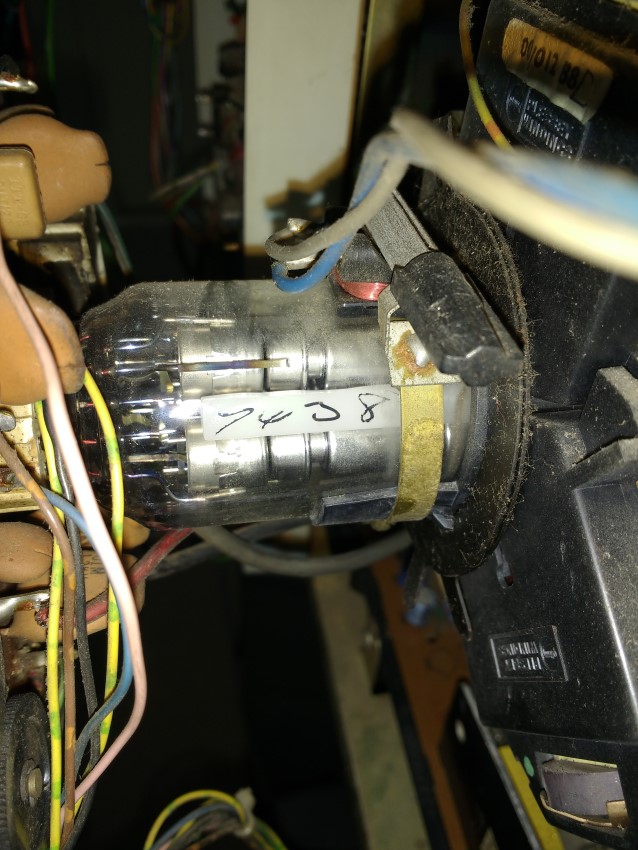 Could this be a date code? It is written inside the glass.
Considering the set was probably manufactured a good four years later, maybe Thorn had a pile of A56-120X CRTs they needed to use up?

I've seen quite a few CRTs with numbers written on the internal, just like that, but not all would decode as a date.. I always thought they were most likely a line number, or QC inspector's number - possibly even just an assembly worker making his, or her indelible mark on the world.

In any case it would be the gun assembly with the numbering, they could have been around in very large numbers prior to being incorporated in the tube ?
Some of the writing on the earlier mazda guns does relate to manufacture date, couldn't easily be changed in guarantee cases

Well it was just a thought. I imagined Thorn had a stockpile of these tubes and no chassis to use them in.
I can't think of any other reason for the birth 9800 chassis

The 9800 series was just a horrible lash up design. I don't know what the the company was thinking of releasing this load of junk into the marketplace. It was based on the original 8000 series which was a good honest cost effective design.

Perhaps the 9800 came about because of the rental market.
The rental companies wanting a larger screen chassis with which their engineers would have been familiar with?

I reckon you could be right there. The 22" 9800 model was housed in a cabinet which was also used for the much superior 9600 series.
Can't remember the precise year the 9800 was introduced, was it 1977 or 78? Certainly by then the delta CRT was definitely passé.

Hi, all, RR here. I once had a Thorn 9800 and I agree, what a load of, I'd better not say it, I'll most likely get kicked off the site, it wouldn't be the first time. Mine had an EHT problem, it was far too high by the looks of it, it kept arcing out violently from the CRT cap. I tried replacing the flyback tuning capacitor, and that made no difference so I thought it must be the EHT lead but I couldn't get another one and I didn't have a LOPTX for that chassis either, so I never solved that one, so I took the whole chassis out and stuck an 8500 one in instead. That worked far better. And the CRT in those sets was a black matrix type, a supposed improvement on the earlier delta design. It was a type A56-128X if I remember rightly, I remember reading about it in the R&T servicing book that covered that chassis. I thought the cabinet looked good but not the chassis, never. RR.

It's all coming back. Was the 22" model designated as 3749? I do remember the EHT voltage was very high, generated from a diode split line transformer. The 8800 series thyristor power supply was modified to incorporate over voltage protection.

Don't think they were aimed at the rental market, never encountered them in DER. I suspect they were a bargain basement model for the likes of Currys/Comet as most sets then had inline CRTs, only came across them as the occasional Government job.

Yes, the startup arrangement was a bit different due to the lack of a mains transformer as was fitted in the 8800, also the regulation could be a bit fluttery like a Rank A823 or Philips G8 but completely cured with the change in value of a single resistor on the PSU (please don't ask, long forgotten as I never made notes). Were they really that bad?

Talking about startup circuits, at least you could work out what was going on with just the diagram and no circuit description. Could the same be said of the Philips GR1AX chassis and It's kickstart via the volume control?

Ultra branded models 6745 and 6749 were distributed through wholesalers. When Thorn lost the Marconi brand in 1977 the Ultra brand was revived in order Thorn products could be sold to non franchise dealers.

The 9800 is a strange beast. Delta gun tube, thyristor PSU and then a bang up to date (for 1978) diode split line output transformer.

Strange why after the success Ferguson had with the 25KV jellypot LOPTx it has to be said as long as the CRT was OK the picture quality was good. The PC650 series signals board saw to that.

I reckon you could be right there. The 22" 9800 model was housed in a cabinet which was also used for the much superior 9600 series.
Can't remember the precise year the 9800 was introduced, was it 1977 or 78? Certainly by then the delta CRT was definitely passé.

Pye did a similar thing with the delta gun 725 chassis used in the CT223 etc. A cheap base model using old technology.

Later on Thorn did a similar thing in the 1980's with the TX chassis. You could buy a 22" set with either a TX9 chassis and a 90" PIL tube or in an identical cabinet, a TX10 with a 30aX CRT.
The TX9 just had a extra bump on the back to accommodate the longer tube and sold cheaper than the 110 degree TX10 set.

I only saw a few 9800 sets. I Didn't like them much. My uncle had a 26" he bought to replace his ailing Marconi 950 mono. Apart from a couple of repairs, one of which was for extensive dry joints I don't remember it being particularly bad.
It Lived for about 10 years I think. I remember the tube looking a bit sick towards the end of it's life. then one day the screen started flashing red, soon after that it was consigned to his shed, where knowing my uncle it probably still is!