Re the CRT the AW43-88 and other 110 degree CRT's did appear to be more rounded, this was for good reason. Allegedly the bulb strength was lower on these tubes due to the wide angle of the cone, so a tube that is more spherical on the face plate gives the CRT the required strength. If you look at the MW36-24 its nearly a perfect rectangular CRT with just rounded corners, it of course was 70 degree.
When the 19 inch unprotected tubes came in they had squared up a bit from the 17 inch 110 degree tubes but there were reports of unexplained implosions with them. Of course with rimband protection and stronger glass the tube was safer. the first mono tubes to be least rounded of them all was the A50-120W/R & A61-120W/R, short lived tubes though.

I think the tube on our (earlier) Pye V310s was just as rounded but less apparent due to the contoured surround and separate implosion screen? The distortion was only really noticeable when viewed from one side. I still can't watch old episodes of Dr Who on a flat screen as it doesn't look 'natural' to me!

... When the 19 inch unprotected tubes came in they had squared up a bit from the 17 inch 110 degree tubes but there were reports of unexplained implosions with them ...

Interesting - I don't recall ever hearing of any such implosions ...

All the sets I ever handled using these tubes had a steel band under tension all round the edge of the faceplate with the fixing lugs/bracket trapped between the band and the tube. Also some fibre packing pieces along the flat sections. In fact, apart from the lack of epoxy filler, virtually identical to the later* Rimguard tubes!

* With early Rimguard tubes the band extended slightly round the front edge of the faceplate.

I never had many dealings with the 'boil in the bag' Fenbridge guard with its dimple pattern to prevent it sticking to the screen or the twin panel tube. This was probably because we only sold Bush sets during this period of CRT evolution and Bush went straight from unprotected tubes to RimGuard so I only saw sets bought from other dealers if their customers came to us for repairs.

Your mention of the imploding tube in the box must have been a rare occurrence and, like the activities of CRT re-gunners, would have been the only time such tubes were without their protective steel band. I wonder if comparative statistics for such incidents were responsible for the development and introduction of RimGuard tubes ...?

Incidentally, I note that we've been down this path before - I'd completely forgotten about it and was looking for an alternative name for the Fenbridge guard when this popped up in the results:

I thought the name I remembered was Cornell or something similar but can't find any trace of it ...

I remember fitting those protective Fenbridge covers during crt changes.
One might recall that fitting the cover at first glance seemed an impossible task as it was too tight to slip over the tube face.
The trick was to warm the new cover up with a hair dryer and this allowed it to fit onto the tube face. A soft cloth was used to push out the trapped air bubbles whilst moving the hair dryer around.
Worst part was if you discovered a spot of dirt when you actually switched on for the first time after fitting the CRT; it was hidden by those dimples in the cover with the CRT out of the set.

The only sets I can remember that used Fenbridge guards were Thorn 950 s . Other makes seem to have gone from a glass or hard plastic implosion guard straight to rimband, with the exception of KB/RGD and some Pye 11U s which used the twin panel tube.
The fenbridge guard and twin panel tubes don't seem to have been used in new sets for very long..
The hard plastic implosion screen does make the screen look rounder, I have two sets that use the same 19" CRT, both 11Us. One has a square plate glass screen (Ekco T418) and the other a hard plastic screen (Invicta 7070U) the screen on the Invicta seems much rounder than the Ekco.

My HMV 2633 see index031 here uses a Mazda CME1601 with Fenbridge guard. The guards seem to suffer if not stored well, mine has developed a sickly green hue and has bobbled in many places. I plan to replace the CRT with a Mazda CME1602 ( rimband) that I have spare.

The Fenbridge used to suffer terribly in smokers homes or those which had coal fires taking on a severe yellowy green hue. Often when changing tubes I would have to fit a new guard as well.

According to my father who used to work at Thorn in Sunderland tubes that were to be twin panelled were normal crts usually selected because they had surface blemishes, these became invisible when the outer protective panel was bonded on.

I'm not sure now but I think the outer panel could have been some type of very hard acrylic and not glass.

I think you are right Trevor, the Pye 67 series and possibly the very first Olympics used Fenbridge guards as well.
It's interesting to hear that they selected seconds for the twin panel tubes, they seem to have a laminate of plastic and glass, years ago I remember trying to break a screen with a hammer( after the neck was broken) and it was very much like a laminated windscreen but much thicker.
I read an article somewhere that gave the regulations as to what was acceptable as a "safe" implosion it gave the max distance and amount of glass that was permissable to be thrown from the set if the tube imploded.
With twin panel tubes I doubt any would escape the cabinet at all.
I saw an advert in a 1969 copy of Practical Television for regun tubes which stated it wasn't possible to regun twin panel tubes and stated that the twin panel tubes in the advert were new.
Above it was another rebuilder which listed regun twin panel tubes so it seems opinion was divided on that score!
When first worked on sets full time as a school leaver we were scrapping most of the ex rental dual standard sets that came in, (some were sold off cheap if they worked well)
most if not all were still on the original tube despite being over ten years old, some were getting on for fifteen.
Single standard sets were refurbished and rented as decontrolled, these were mainly Pye 169s and ITT/KB VC200s. these were the later 20 and 24 " square screen tubes. Many of these had been fitted with replacement tubes by the time they were five years old, the shop bought cheap reguns from a Nottingham firm. one of the engineers put a set on the service rack and it tipped forward and collided screen to screen with another set.
The tube went off with a hell of a bang for a small screen and showered shards of glass everywhere, the other tube was undamaged.
There was a bit of an inquest and it was decided that the regunning process had affected the rimband in some way.
The incident didn't put the service manager off using the firm( for colour tubes as well) they were much cheaper than everyone else!

... There was a bit of an inquest and it was decided that the regunning process had affected the rimband in some way ...

Rich, did the faceplate stay in one piece?

The Rimguard doesn't stop the tube imploding: what it does (or should) do is keep the faceplate intact to prevent the viewer being injured by flying glass, thus providing the same protection that the armour-plate glass or triplex implosion screen did previously.

When the Rimguard tube was first released, Mullard published pictures of some tests they had done. One of these involved mounting a tube in a frame, then swinging a steel demolition ball at the centre of the screen. The picture showed that the glass had cratered at the point of impact but the faceplate had remained intact.

Whilst writing this, the best part of 50 years on, it has occurred to me that there was a flaw in the method of testing ...! What they should have done was to mount just a faceplate in the test rig and hit it with the steel ball from the inside because the whole objective, surely, was to stop flying objects leaving the tube, not getting in ...?

Chris, any chance of replacing this wall with a Rimguard tube ...?

Hi Terry, no the tube imploded completely, just a few chunks of glass remained around the rimband, the other tube faceplate took the full force but remained intact.
I remember there was a lot of glass expelled from the set because I got the job of cleaning it up!
I can't remember if the set was repaired, I certainly didn't get the job but it wouldn't have suprised me , the service manager was so mean you could have poured boiling water down his throat and he would have peed ice cubes!
To be fair though it was the only one I can remember letting go like that and it was provoked!
Trent tubes were one of the regunners we used, based in Nottingham, they operated from a couple of old terriced houses I think, anyone remember them?
Rich. 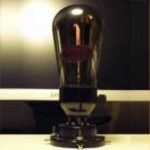 Hi,
I recall fitting a Fenbridge Guard to a 23" Ekco (Pye 11U Chassis) CRT. The company had a special jig to support and hold the tube face up so as to make fitting a whole lot easier and avoid wrinkles etc. Dust was the biggest enemy! I always wondered about thermal screen stresses when using a hot air gun played over the surface of the cap and being that close to a large imposing tube. However company rules stated it was mandatory to wear a full face shield during replacement but I don't ever recall one imploding. Some guidelines issued by Mazda on the use and maintenance of Fenbridge Guards.. 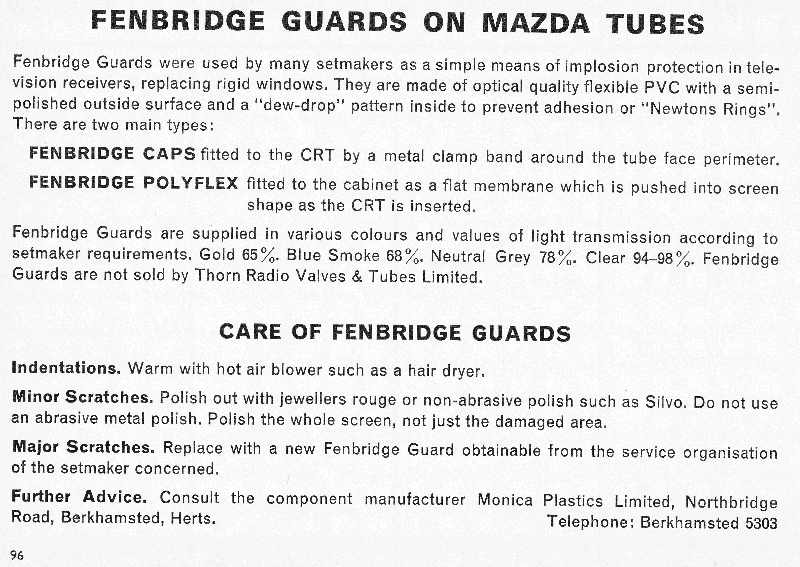 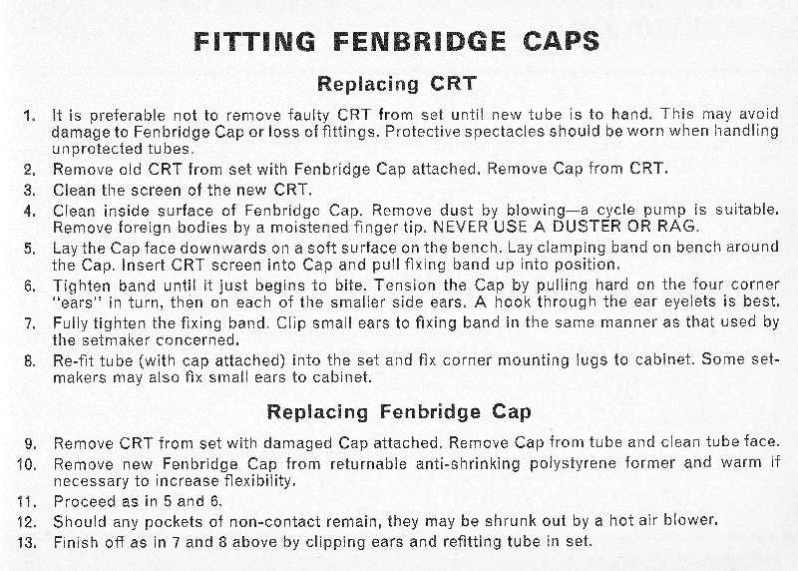