When I received this set it had been restored but not used for a number years. I woke it up slowly on a variac and it produced quite a good picture but after leaving it on for a while it started loosing focus, typical of falling EHT caused by transformer saturation. Connecting the EHT probe to the tubes final anode confirmed this as the EHT was just 2.9 kV and falling. I was surprised how good the picture was with such low EHT.

In this set the EHT is generated not by the LOPT but by a separate transformer. This transformer was removed and all the wax around the windings melted away with a hair dryer. The wax inside the former and around the core was removed as well. It was tried again after this treatment and it showed an improvement but the EHT was still falling, albeit much slower. Even with the brightness and contrast turned down the EHT was little over 3kV going by the service data it should be 7kV.

Not having any means to rewind the wave wound transformer I decided to have a go at making a new one. I measured the inductance of the 3 windings which gave an indication of the turns ratio. That is of course assuming that whatever short was causing the poor EHT would not be shorting at the much lower voltages that the inductance meter used. I had assumed from the outset that the self capacitance of the EHT winding would cause a problem as it would be higher that the wave wound one, however this proved not to be the case.

The EHT winding consists of 1170 turns of 0.175mm ECW split into tree sections. A former was made from acrylic sheet for each EHT section. Circles was cut with a hole saw, two 47mm ones for the cheeks from 2mm sheet and a 34mm one from 3mm sheet for the centre. They were super-glued together and then 28mm diameter of centre was removed so it could fit over the primary winding. The EHT winding was given a few coats of coil dope to help insulate it.

The values of R36 and C30 (Manufactures) had to be changed to 68K and 2n2 respectively. As R36,C30 and C31 are all mounted on the transformer the whole unit is a drop in replacement for the old one.

The mains selector on the TV is set to the 240-250V range and with a mains voltage of 240V the transformer produces EHT of 6.7 KV, the anode current of the P61 is comparable with the service data.

I have uploaded a few photos, one off screen taken in daylight the geometry will need setting up but that is for another day. 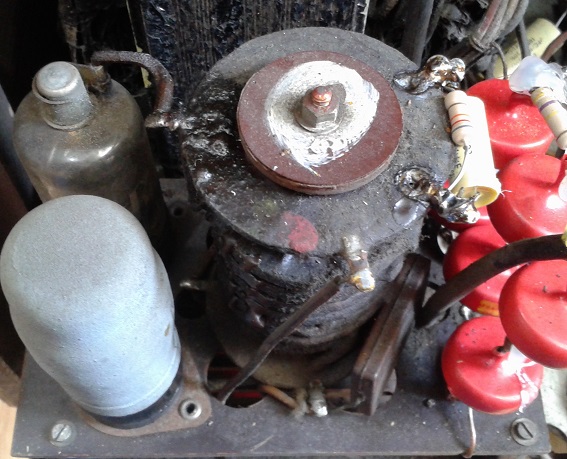 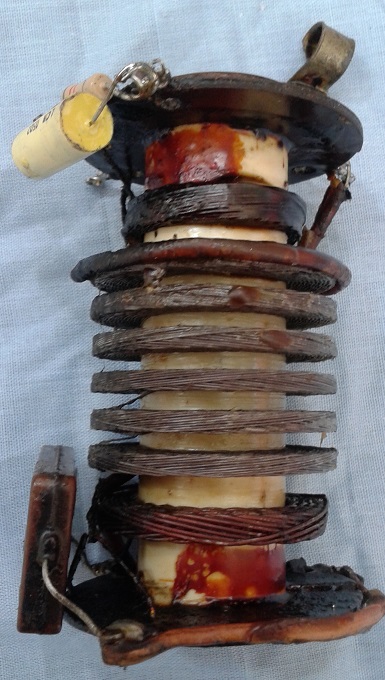 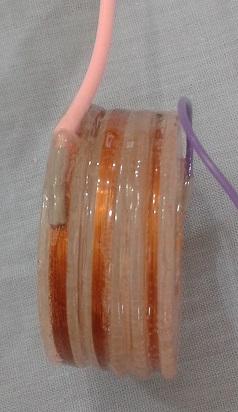 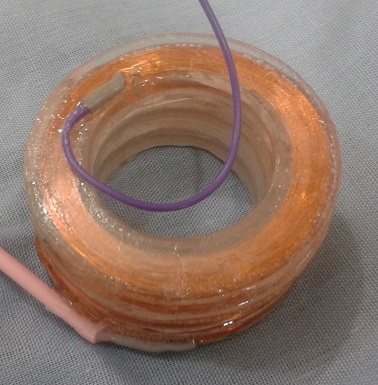 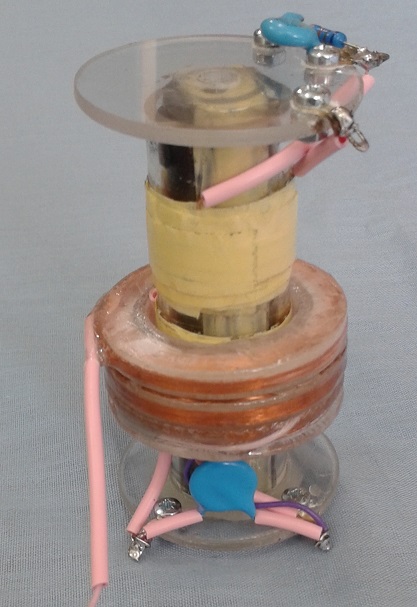 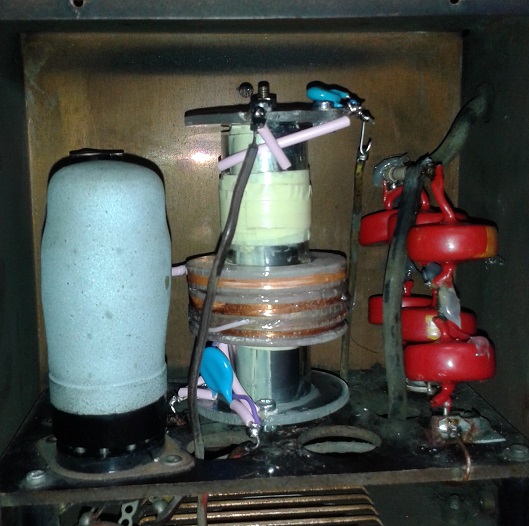 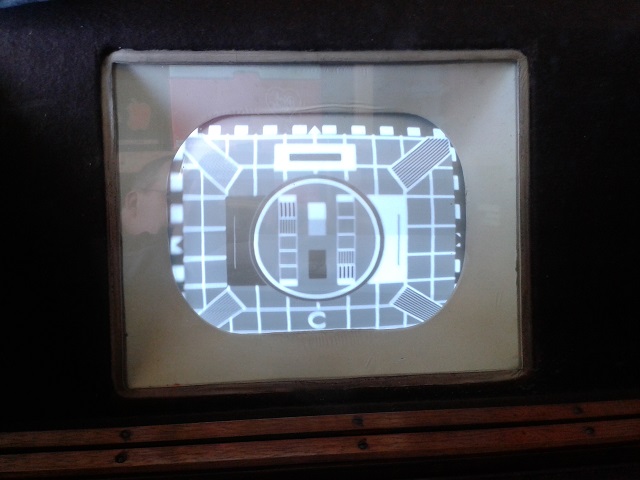 Well, that is brilliant Frank....an excellent solution to a sticky problem !!

What a great solution, looks an excellent job.

Thanks for the kind comments chaps.

I haven't given up on the original transformer yet.
When I was building the new Transformer it occurred to me that the feedback winding was wound next to the hot end of the EHT winding. I decided to Megg between the EHT and feedback windings and found that there was just slight movement of the needel on the 1000V range however when I heated the Transformer with a hairdryer this dropped to close to 5M. The connections to the two ends of the feedback winding and to the hot end of the EHT winding are to solder tags on the top circular panel. To determine if it was tracking across the former between the coils or if it was between the solder tags I lifted the wire from the EHT winding from its solder tag.Once again I Megged and heated the transformer but no matter what I did I could find no leakage between the windings or between the solder tag and the windings. The heat from unsoldering the wire must have evaporated moisture that was causing the leakage.

I left the wire off the tag and fitted the transformer to the set and it was now producing just over 6kV but the EHT was still falling back as the transformer heated up. I will leave the transformer in a warm window over the summer and see what happens. 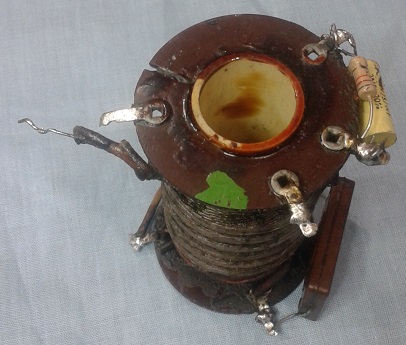 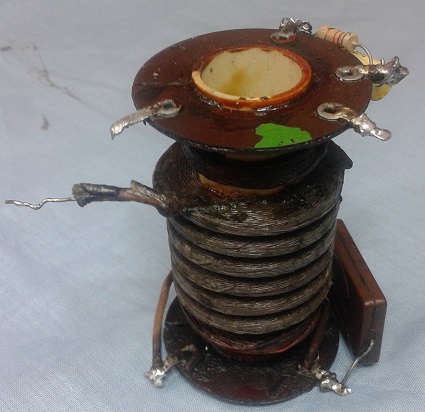 Sounds promising, how about leaving the overwind connected to a bench supply of about 30 volts 100ma for a day ?
It worked fine on a few of my Ekco overwinds that had this problem, one of the last ones I did was sealed in a clear plastic bag with the idea that if condensation occurred in the bag it would be visible, and it was! (coldish day). The wax on the winding does actually get to the point where its liquid which is when I use cotton buds to clean it up.

should have said, bag removed once all cleaned up, then when winding has been proved 100%, epoxy is applied when winding is very slightly warm.

I use one of those little table top ovens to dry out LOPT's, it works a treat and only cost me a fiver

It also has the advantage of not stinking out the kitchen, or making a mess in your main oven!

I agree, Jeffery. I use the heating effect of a current through line scan coils to loosen a stuck yoke. It works every time without the use of messy solvents.

I will give the current through the coil a go hopefully it will work. I will report back when I get to do it.

Absolutely wonderful job. Also your transformer can be used in other TVs, especially as a replacement for the mains EHT transformers fitted in older receivers as well for any home construction receiver projects. The EHT unit in the TSC48 is about the same size as a mains EHT transformer. A lot safer as well.