What a great result and an outstanding piece of detective work Andrew. If it holds up on soak and is proved to be the main culprit these LOPT's face, we may just have the solution now.

What a great result and an outstanding piece of detective work Andrew. If it holds up on soak and is proved to be the main culprit these LOPT's face, we may just have the solution now.

So far so good...been about 5 hours so far on soak running on 625, but as Neil said, time will tell lol.

On a slightly different note, this set has a transistorised UHF tuner fitted.
I would guess it would have had a valve UHF tuner originally ?

Anyway, a check on the valve heater voltages suggested they were too high the PCL82 was at about 17v whereas it should be 16.
I worked out that the PC88/86 of a valve tuner should drop about 7.5 volts, so I fitted an additional 25 ohm resistor in the heater chain.
This means that all the heater volts are now correct.
I mounted it on the UHF tuner plug, and it doesn't get very hot. There was just a wire link fitted across the heater terminals before. 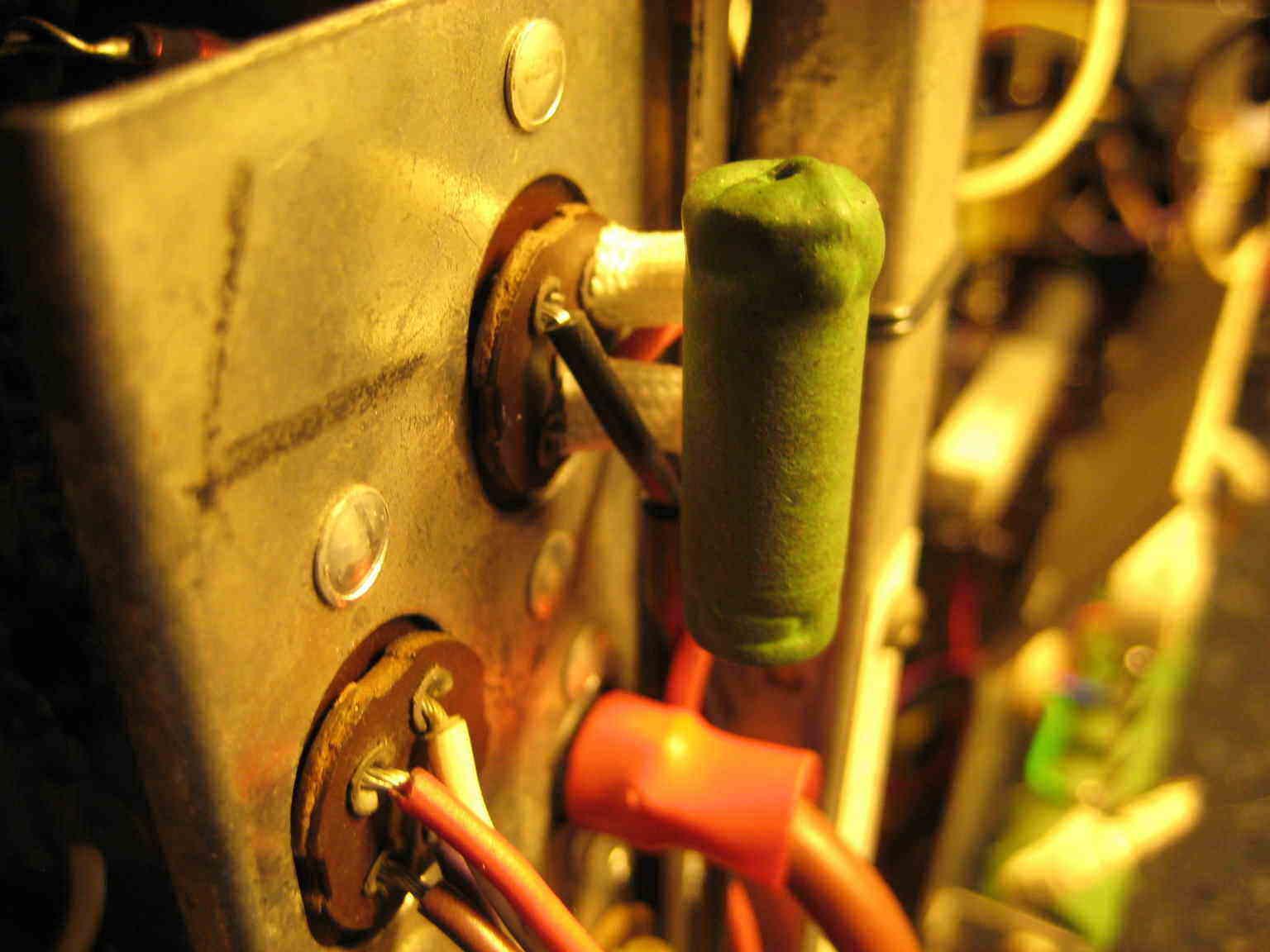 What a fantastic piece of detective work and diagnosis!

Maybe most of the Bush LOPT's can be salvaged in this way.

Worth checking the current rather than the voltage with it being a series heater chain rather the voltage across an individual valve just in case that valve heater is not quite right.
I reconditioned an Ekco T433 in 1970 for use as our home TV. We always have had a good mains power supply, usually 250v, I measured the series current and found it high, fitted an extra 20 ohm to bring it to 300ma. The last time I measured the power quite recently is was 253v, not using the T433 anymore though

On a slightly different note, this set has a transistorised UHF tuner fitted.
I would guess it would have had a valve UHF tuner originally ?

Yes. In its original form it was released as the VHF only TV125. The TV125U with (valved) UHF tuner didn't start appearing until the opening of BBC2 was approaching.

Interestingly, though, the TV125 was only fitted with a shorting link on the plug and, presumably, your tuner is a later Bush one - because of the mechanical arrangements, including the push button unit, needed to fit the cabinet ...

So far the LOPT is fighting fit....been on for long periods now and perfect operation.

All voltages spot on and bags of width available.
Had to change the PCL85 due to the bottom creeping up.
Nice to have the mustard caps, no 'orrible wax ones.

PS....anyone have a scrap chassis I could pinch the line stage screening cover from?

I seem to recall that the TV125 had a rather bad press regarding system switch reliability; think I saw an article in Service Skill about it...

That probably makes it too early for the U version - Crystal Palace had only just closed down (4 days earlier!) the UHF transmitters so that they could be retuned to Channel 33 for the BBC2 launch.

Remember also that the BBC had announced that the new channel would be aimed at minority interests and interest nosedived overnight - I encountered a queue of customers in the shop the following morning all wanting to cancel their upgrade orders - so the original owner probably didn't bother for a couple of years.

It wasn't until the BBC created a demand with Match of the Day that UHF conversions really took off and this owner benefitted from a transistorised tuner rather than its much lower gain valved predecessor.

Thanks for the interesting info Terry.

I would imagine the set had always been in Norwich, and therefore Tacloneston the local transmitter (BBC), or Mendlesham (ITV) a little further out.
The resistors on the UHF tuner look more modern than the rest of the set, so it may well have been fitted quite a bit later.
The tuning buttons are all set in the high end of UHF, where Tacloneston is (or was for analogue).
UHF BBC2 started on 9th Sept 1967 from Tacloneston on channel 55, BBC1 and ITV early October 1970.

When BBC2 started in April 1964, all UHF tuners were valved.

Transistorised UHF tuners started to appear in sets about a year or so later and, within a short time, the valved type were history.

From your date, Andrew, Tacolneston was over three years behind Crystal Palace, so well into the transistor area for conversions.

Meanwhile, we still had valved UHF tuners on our shelves, left over from when so many customers cancelled their upgrades ...

Hi, well it looks like the LOPT is happy now and so am I.
Been several days and no hint of any problems.

Replacement of the "CenTerCel" metal rectifier MR23a and b with a couple of IN4148's cured a problem of too much contrast.
(AGC delay).

The same goes for MR31/32 but this time for poor line lock, I used OA91's here.
I think either type will work ok, but only had a couple of the OA type left.

Hi all,
This is a niggly wiggly kind of fault that has always been there.
It is only just noticeable on 625, but worse on 405.
Basically, it is small wiggles in the verticals that seem to move down the picture.

First photo is taken with the set on tune and you can just make out the wiggles.
Second photo is with the 405 tuning deliberately mis-tuned to a position where sound on vision would normally occur as this seems to exaggerate the fault.
The focus of the camera is slightly out so as not to see the line structure.
The effect is also worse with a weak signal, see last photo.

Bearing in mind that the LOPT screening can is missing, could the line stage be radiating RF? 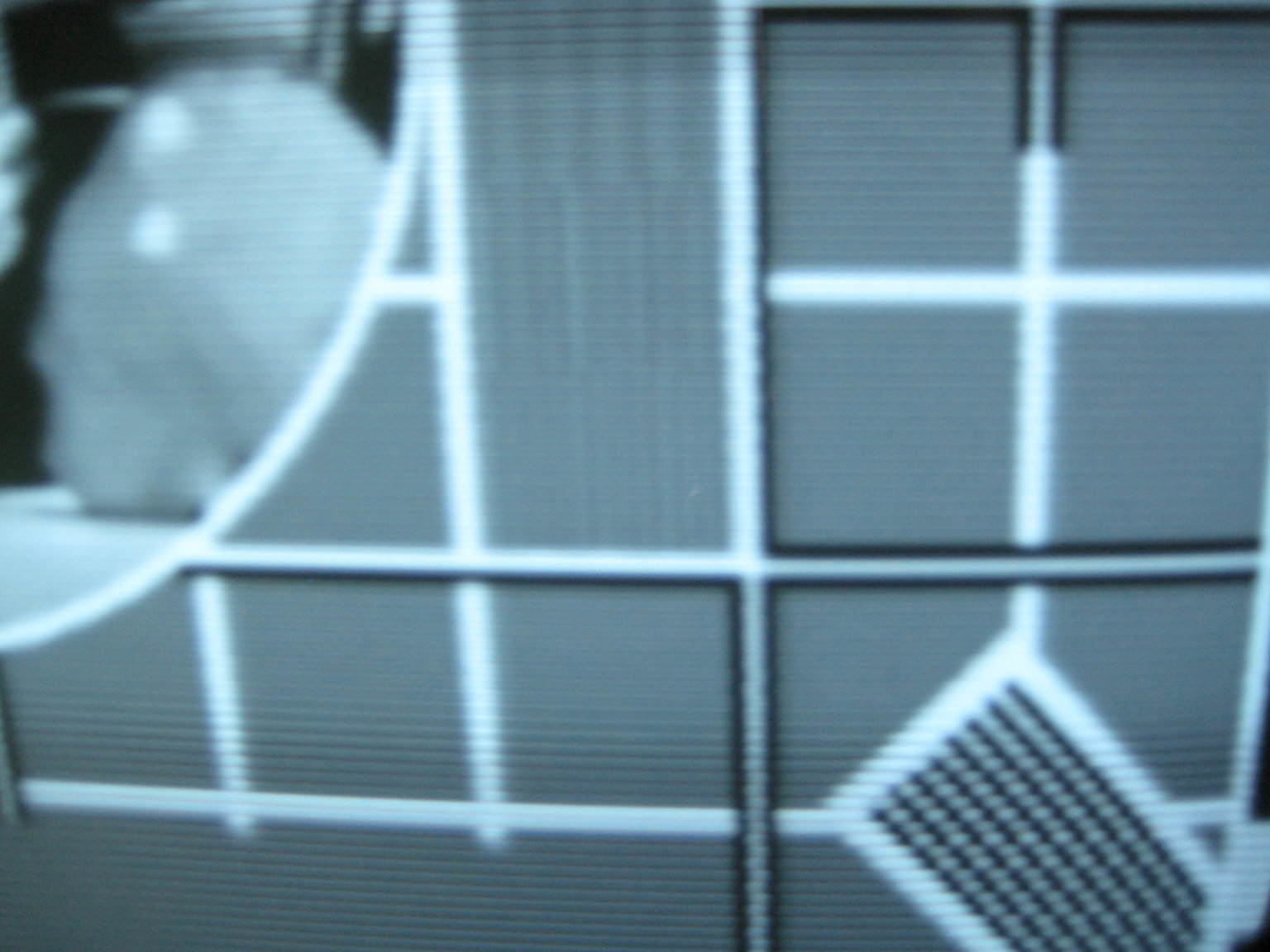 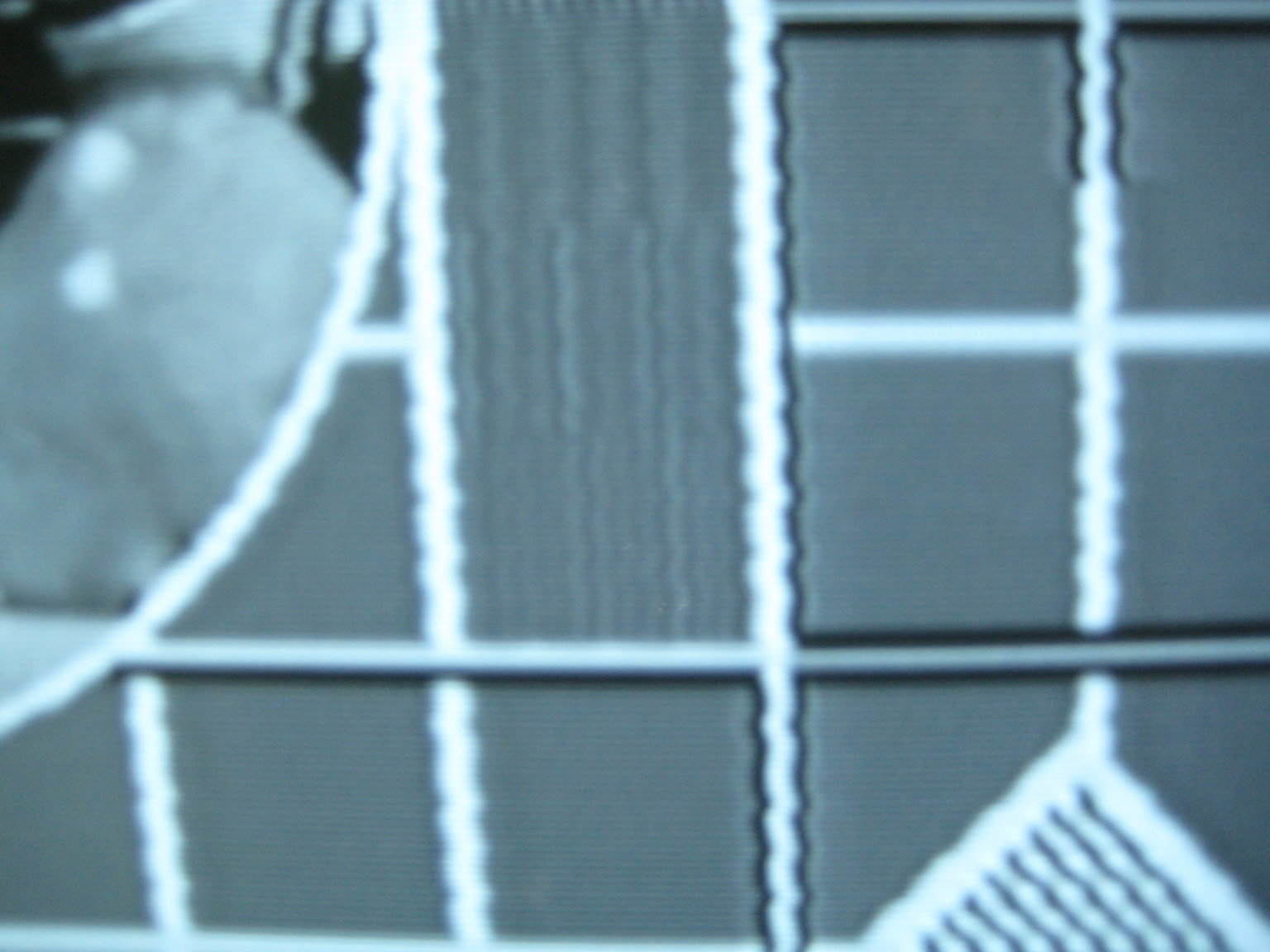 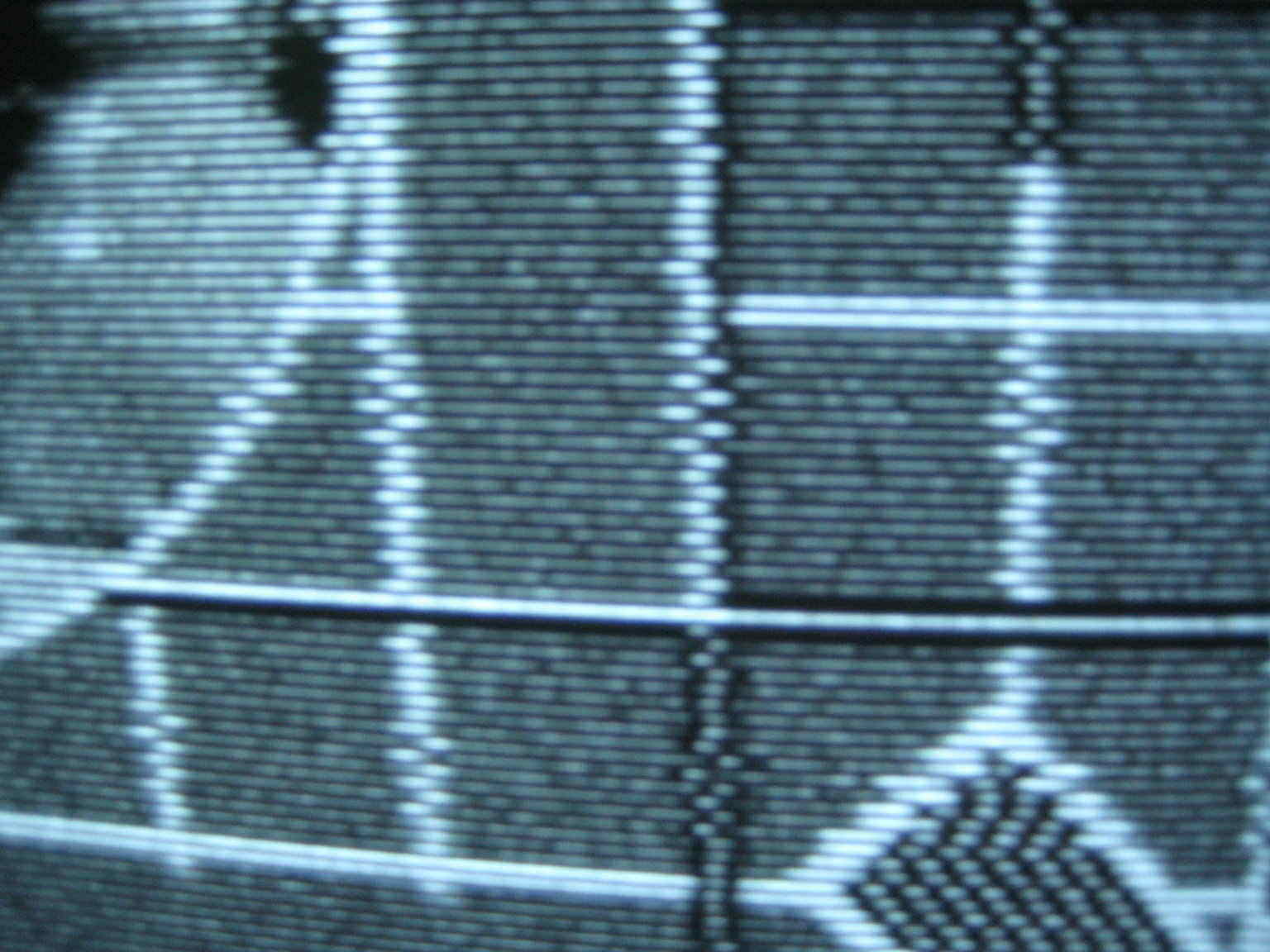 Looks like 50c/s ripple, if the smoothing is ok, check any connections to chassis for high resistance and then heater cathode leakage in the valves.
It does not appear to put a dark bar on the video so I would be checking Sync and timebase circuits first, any hum in the sound?

perhaps a simple screen composed of cooking foil glued onto cardboard could prove/disprove whether the missing screen is instrumental in causing this problem ...?

A test screen is a very good idea, I don't remember having the can removed causing problems, it was very often removed during repair but I always refitted them and it will be easy to check if it as any effect.
Also worth checking lead dressing.

... Bearing in mind that the LOPT screening can is missing, could the line stage be radiating RF?

The fact that the problem is exacerbated by reducing the signal level does suggest that RF radiation is indeed the cause ...

Looks like 50c/s ripple, if the smoothing is ok, check any connections to chassis for high resistance and then heater cathode leakage in the valves.
It does not appear to put a dark bar on the video so I would be checking Sync and timebase circuits first, any hum in the sound?

I thought the pattern was in a band a few inches high moving either up or down the screen. I probably misunderstood.
Frank