I have a friend who is trying to source a Philips LOPT from the early 60s.

I have one in a chassis but I'd rather keep it (the chassis) if I could. Besides I don't know if it's any good.

In Australia we saw two versions of this transformer, Both had the beige epoxy moulded EHT winding, the earlier one, part no. NT3101 had a phenolic tag board. The later part no. NT3102 had a beige moulded plastic tag board, was fully white epoxy sealed but was otherwise similar, with a different voltage aux winding.

Does any of this sound familiar? It's almost certain Philips had the same transformers internationally but gave them different part numbers which is why I can't find them anywhere.

Plessey also second-sourced the NT3102 and the Plessey part was used in a local version of the BRC1500 chassis made by AWA-Thorn (universally hated by service techs, it was unreliable and way out of date when it was introduced).

Anyway, does anyone recognise either of these parts? Know what they were called in the UK? Better still, have one that's for sale! Or know someone who does?

I don't suppose you'd have a picture of the transformer you're after? - A picture speaks a thousand words.

I have a few LOPTs of various types (mostly 'modern' diode-split for colour sets) that I'm unlikely to use, but you never know what might be lurking in the darkness.

This is the NT3101 - in this case it's been adapted to an older 90 degree chassis replacing a Philips 90 degree LOPT. Hence the 6CM5 and 6AL3 connections on the wrong side of the transformer.

The very early NT3101 did not have the white potted EHT winding, it was a more conventional looking layer wound affair.

Okay, now we know what we're looking for, I'll have a dig at the weekend and see what I've got, but if I'm honest, I have my doubts. However, let's not put the mockers on it at this stage.

If all else fails, "Till Eulenspiegel" (forum member) is the grand master at re-engineering LOP circuits to other transformers.

Thanks Katie. Yes I do LOPT substitute re-engineering as well. Necessary these days!

Really all I need is a transformer to suit a common Philips practice valve circuit as follows:

Can anybody help with this transformer?

Sadly, I have to report no success so far, I'm afraid, and I'm running out of places to look. I'll let you know if I do find anything, but I have serious doubts now, but I'll keep my eyes peeled. 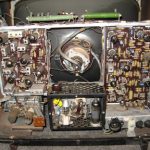 I'll have a look through my stash of Philips LOPT's, am not sure if any of our native New Zealand sets used this version but worth a look at least. Will report back when I've had a dig!