I've finally started trying to get some life out of this little set, thanks to Chris for scanning the Trader sheet for me, I think it may live again.

A little of the set's history...

The set was found by my Uncle in the loft of a house in Clifton, Notts, when his Mother moved there some years ago. He'd mentioned the set a few times, then one day we went to visit, and he produced this rather battered little telly, and said I could have it.

It had been up there for years, and had lost it's back cover, and also had it's speaker ripped out. it had been stored damp too, most of the steel wire around the scan coils had rusted and begun to spring apart, the top of the chassis was covered in dirt, and rust. Lots of rust!

The cabinet is very ropey too, veneer peeling, and the finish has flaked off in most places. It still holds together well, all joints are quite solid!

I de-rusted some of the chassis a while back, and it's come up quite well, the underside was OK to begin with, it looked like a different set underneath!

All the wet electrolytic caps are shot, they have all lost their liquid, and even rattle when shook! I've replaced 1 already, but need to mount it properly. The mains droppers are knackered too, rusted terminals, and the top 2 sections are O/C, and the one that feeds mains into the PZ30 are dead as a dodo too, which turned out to be quite handy, as I managed to get heaters lit on the 200V setting, without the HT getting in the way!

I had to snip out a waxy connected from live to chassis (I think that's where it was, I'll clarify that later!) as I was getting a reading of 75 ohms across the mains terminals. with that out the way, I could apply mains through the variac, and the heaters glowed nicely, but the CRT is not in circuit yet, just a shorting link across it's pins.

I fitted 2 100 ohm resistors in place of the dead ones that feed the PZ30 with AC, and managed to get 75V of HT, and some smoke from somewhere, and with a test speaker fitted, I can hear a nice mains buzz, which can be varied with the volume control.

This is as far as I've got, I need to change the smoothers, and see if I can get some life from the line stages, the LOPT is in an oil filled can, so hopefully it's ok! 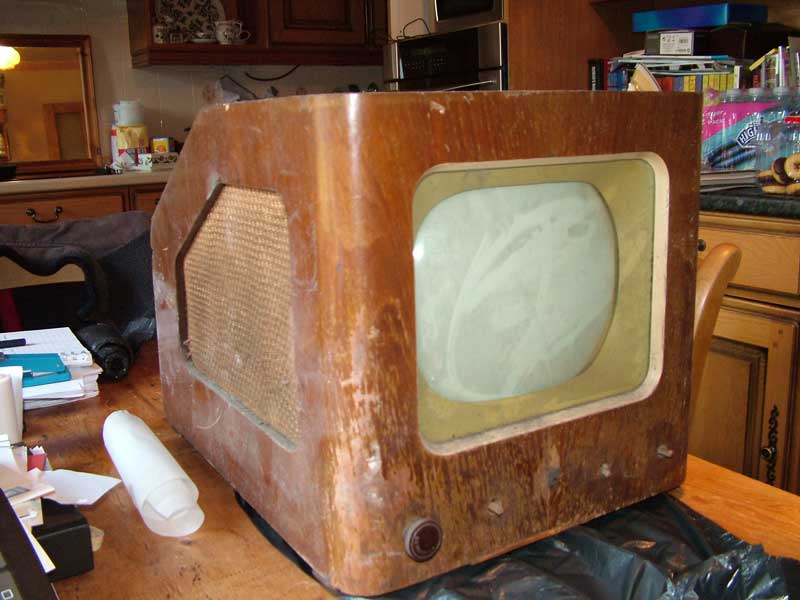 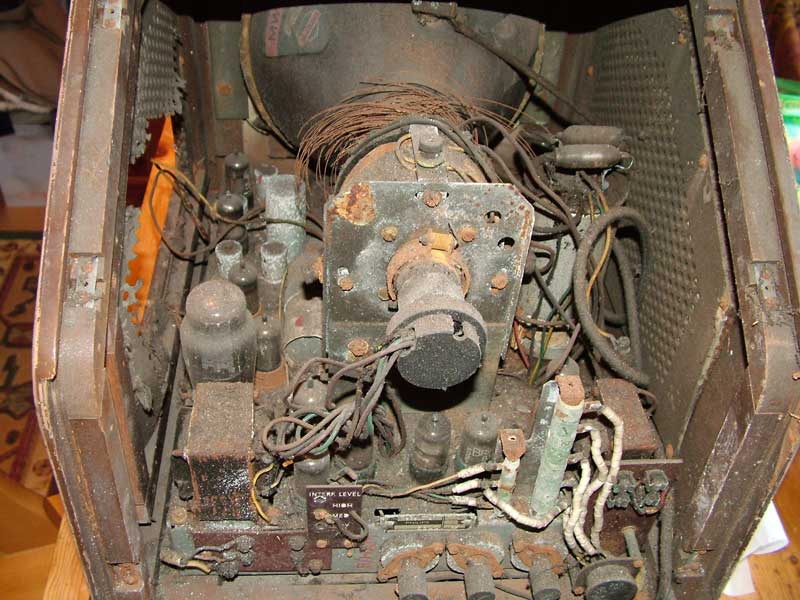 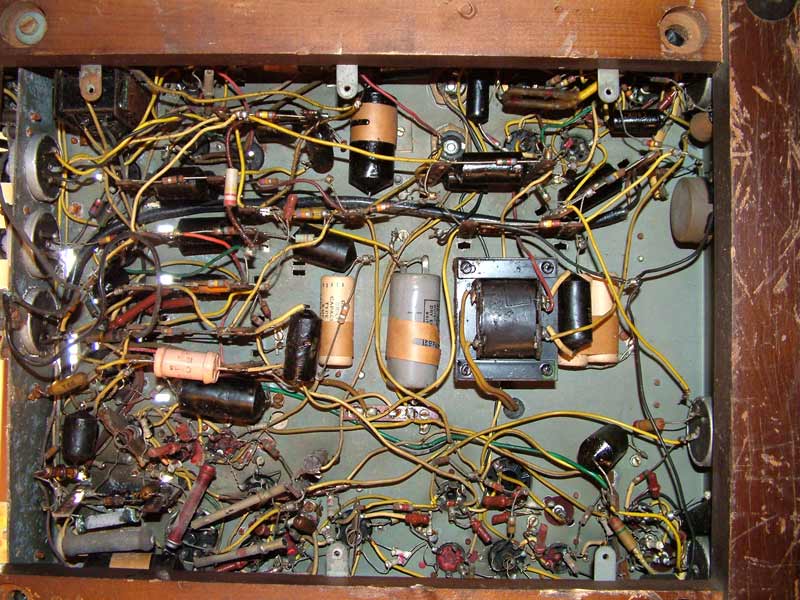 It was C81 on the trader sheet, that's what was causing the almost short across the mains!

I'll get some more photo's of the set later too, in it's de-rusted state.

Lloyd, I have a set of virtually the same chassis. Could you please pinpoint where the mains filter cap is on the photo above? I can't find where this cap on the diagram relates on the actual set.

Hi Aidan, I'm not entirely sure where it is even looking at the diagram! C81, and C74 seem to be likely suspects, but nothing directly across the mains, these just go from either side of the mains to chassis.

I can point out C81, but C74 is hiding from me currently.

Trevor beat me to it! 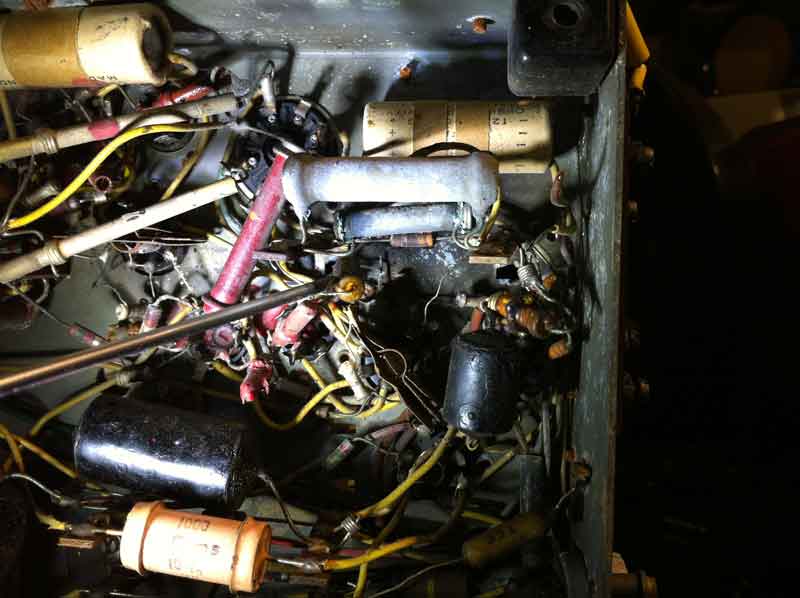 Lloyd, I have a set of virtually the same chassis. Could you please pinpoint where the mains filter cap is on the photo above? I can't find where this cap on the diagram relates on the actual set.

Hi Aidan.
If you look at the diagram the filter cap is just a 0.001uf (C81), its not across the switch its after a resistor network for voltage setting. In the set its next to the Thermistor and can be seen in the Diagram in the Library and also on Lloyds photo, If you look at the diagram you will clearly see a number of other decouplers in the heater chain, these could also be suspect and of course Lloyds problem cap with his set.
Not a great set for a first restore Aidan. Would the chaps in the TV shop you worked in not give you some help?

I'm afraid that opportunity fell through and I'm not living in Bradford anymore anyway. 🙁

Looking at "TV Fault Finding" by the Amalgamated Short Wave Press, I do seem to have worked out many of the basics, and can recognise where these are in the TV. Not sure if this chassis uses a blocking osc, though.

Yes it does use a blocking oscillator according to the Trader sheet.

I suppose I should really check the transformer to make sure it's ok!

I feel I should point out that a fair few sets did have mains filter caps across a terminal and chassis.

Yes, it just threw me off because it's not in the conventional place, I normally expect them to be fitted across both poles of the mains straight after the switch, and the chassis is usually neutral.

No, I'm afraid I just can't see what you mean, Trev.

I was thinking it may be something like that with all the decouplers instead of just one big one, I wasn't sure though!

Very good point about using a scope on this chassis, I haven't got an isolating transformer (yet!) so a scope will not be going near it until I do. I have a small Philips battery powered scope, but I still wouldn't feel safe prodding around the chassis whilst live. I'll probably have a transformer soon, got a couple on the watch list on ebay.

A little progress has been made on the set, I've found some temporary replacements for C's 20, 57and 75, which are separate wet electrolytics on my chassis. Quite a bit of the hum has gone from the audio, but not all of it. R106 has taken up smoking, so I'm guessing C82/83 are past their best. I'll dig out some suitable replacements and see if that sorts the smoke out. Lifting their chassis connections made the negative volts rise (or should that be fall?!) and the smoke stopped. I'm still limiting power to the set via the variac at the mo, it's nowhere near safe enough for direct mains, and it can only have 200V anyway as the dropper is bust!

I guess I still consider myself a novice restorer, certainly with this set, as I've not seen such odd circuitry before. I'm hoping all the oddness makes for a good set when it's finished!

Well, I never thought I'd be saying this at all, never mind so soon, I have what may qualify as a line whistle

Turns out C76 is toast, I bridged it with a 150uf cap I had lying about on the bench, and the HT shot up to 120V and the hum on the audio has now gone, and I'm left with odd noises and whistles. Previously I've only managed 70V.

It started as what sounded like a waxy fizzing, but it wasn't, and when I twiddled the line hold control the hissing turned to a whistle, a very high pitched unhappy sounding one, but still a whistle! and I can vary the pitch with the line hold. I could also smell ozone, no idea where that's coming from at the moment though. I still don't have a CRT fitted as yet.

Time to order up some replacement electrolytics of the correct values, and start picking out and replacing the tar blobs. I'll also get some new power resistors to repair the droppers.

I'm still in shock over the fact there's any life left in this thing at all!

Almost forgot, some shots of the chassis all cleaned up (a bit). 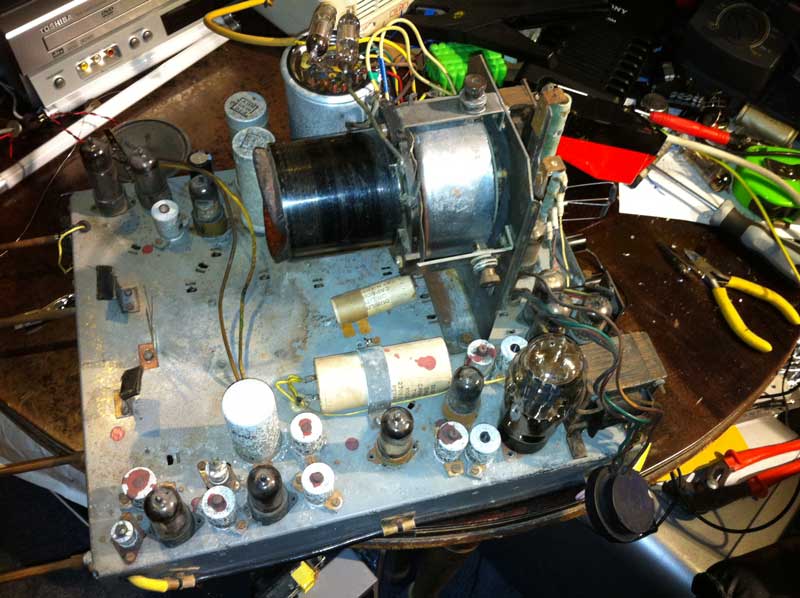 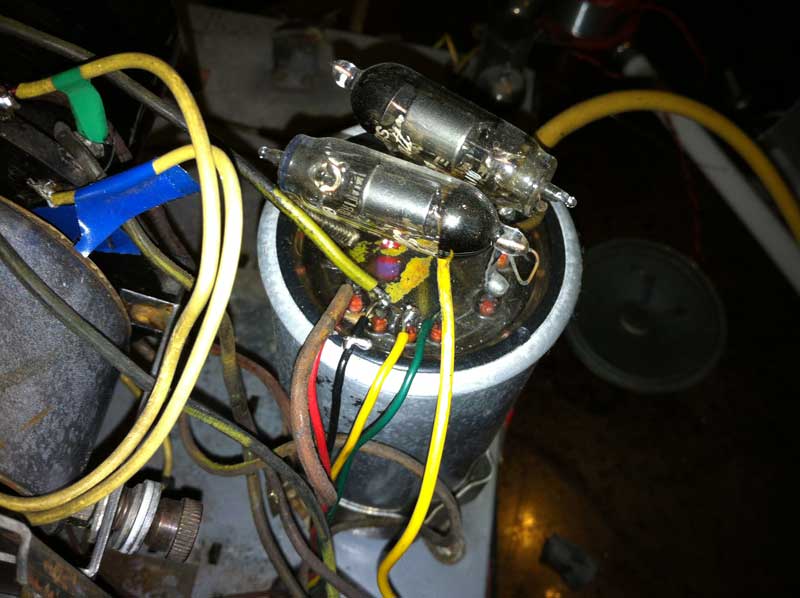 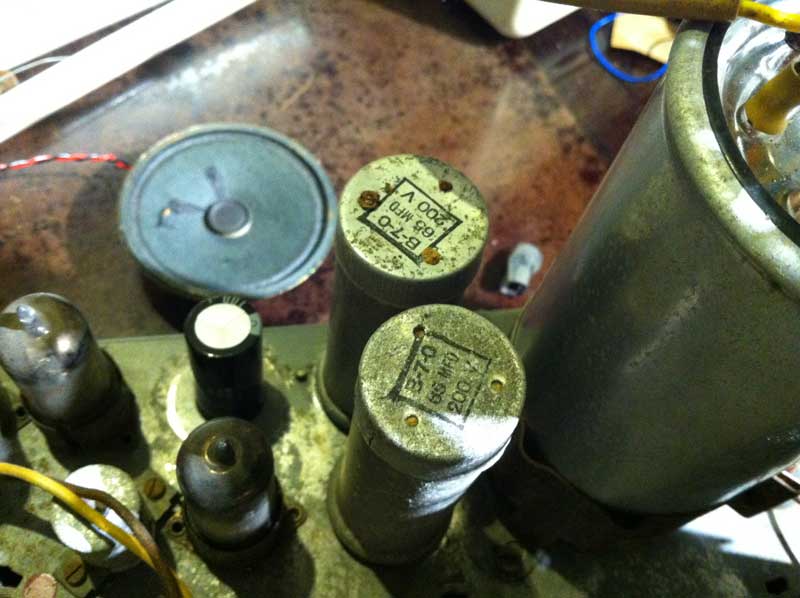 Now that does sound promising ! Time to throw some caps at it me thinks

The chassis looks better too.
I'm looking forward to seeing more progression with one, keep up the good work

Were those EHT rectifiers really just tacked onto the LOPT like that from new? 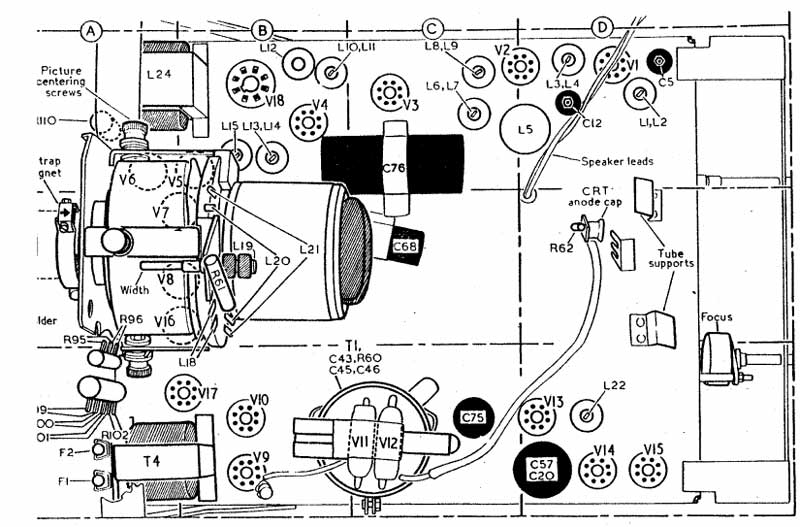 Nice going Lloyd, amazing! Looking at photo two in your first post you wouldn't think it possible. It will be interesting to see first light. What are you doing about scan coils?

I could also smell ozone, no idea where that's coming from at the moment though.

I would hazard a guess that it's coming from one or both of the EHT rectifiers tacked across the LOPT. I can see one long lead from the anode of one of them that is very close to an adjacent tag. This will need tidying. You need to aim for the shortest possible leads and nice rounded blobs of solder. Any solder spikes are also in danger of causing an arc.

However, great work so far!

Looking forward to seeing first light (from the screen, not anything else)!

Were those EHT rectifiers really just tacked onto the LOPT like that from new?

There should be a flat plate with a circular clip which fits round the top of the LOPT and the EY51s sit on the plate and are fixed by a typically Philips paper clamp. My Philips has one but the Mullard console I have which uses the same chassis does not although there are witness marks where one was originally fixed.

What good progress, the worse the original condition, the better they look for a good clean

I agree that a recapping will really work wonders with this set, it looks like the all important LOPT is good.
I am really looking forward to seeing first light

I'm not sure what I'll do about the scan coils yet, My guess is the steel wire was like the ferrite bits you get in modern scan coils, or laminations in a transformer. I'll look out for some steel wire, and try to rewind it, or I did think maybe some thin sheets of steel wrapped around instead! I'll see what I can get without it first though.

The EHT rectifiers are missing their clamp, another part robbed from the set a long time ago! I'll tidy up the soldering on them too. Might also turn off the lights and see if there's any arcing visible.

I think the worst of the muck was oil from the LOPT or capacitors with bits of rust from the scan coils in it, it was baked on!

Things are getting more exciting by the minute, I just fired it up again to make sure I wasn't dreaming last night, I heard the whistle, which sounds more like 625 lines than 405, turned off the lights (I have a remote control for the low voltage lights in the workshop

) and I could see the heaters lit nicely in the EY51's!

I also had a form of 'first light', not from the CRT, which still isn't fitted, but from a fluorescent tube strategically placed on the bench by the anode lead that should be connected to the CRT. There was a dim flickering coming from it!

I have EHT, as confirmed by my RBM EHT meter!

Also, a screwdriver with a magnet on the end held within the scan coils vibrates nicely, so there's some scanning going on. 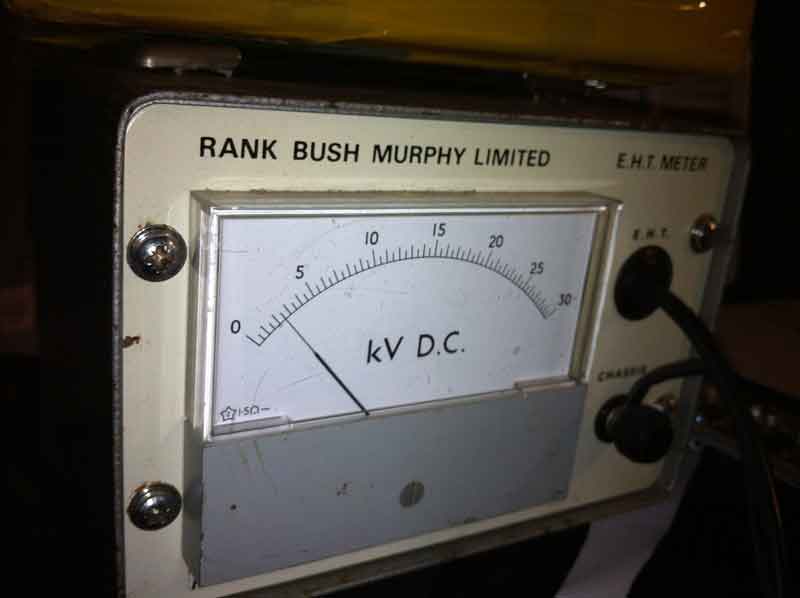 I thought that the steel wire was there for magnetic screening purposes to stop too much radiation! Maybe I'm wrong, but it would be interesting to see what effect the broken wire has.