Hi guys , this is one of my latest purchases & yes it's another PYE but this is a bit different it's a PYE trio but NOT the usual one with the 11u chassis .

I'll start with the radio it's a Fennman II RM it looks very tidy & I notice it uses 2 EL84 output that will give it about 15 watt output .
It has the usual 2 speakers at the front & a rather large bass speaker in the bottom of the cabinet

The TV section is the CM17 chassis it looks in good untouched condition & uses the MW43-80 crt .

Now we get to the interesting bit the record deck looks like any other deck of that period but this has the capability of recording
The set came with 1 magnetic recording disc , 1 recording head , 1 magnetic eraser & the original microphone . 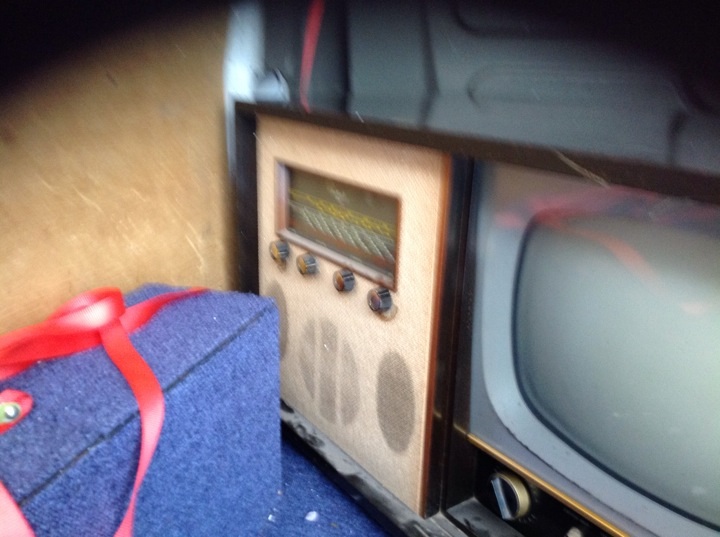 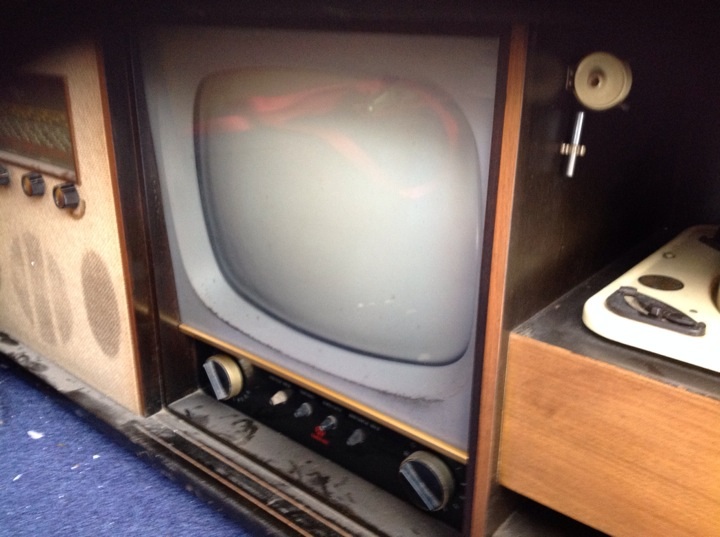 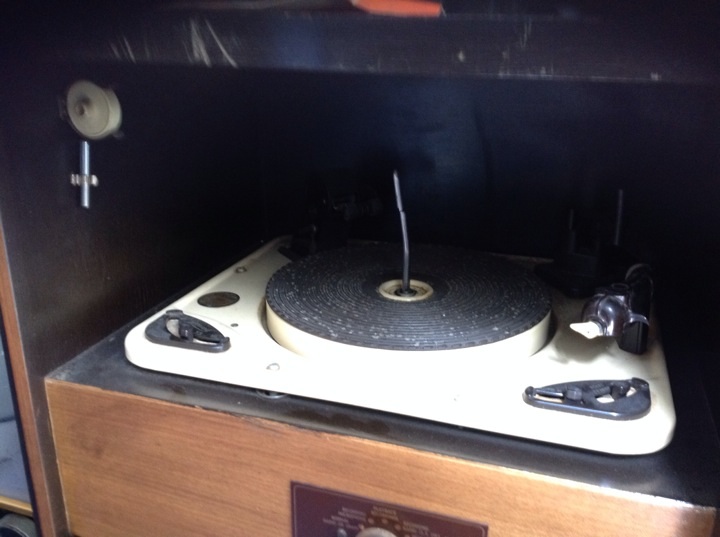 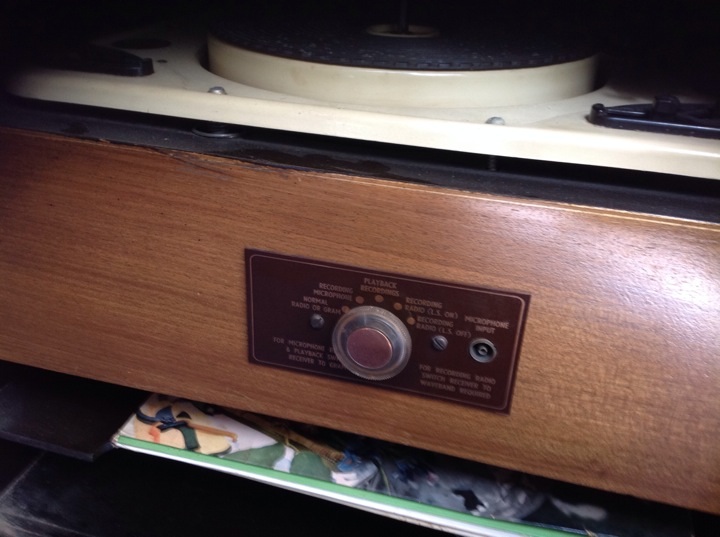 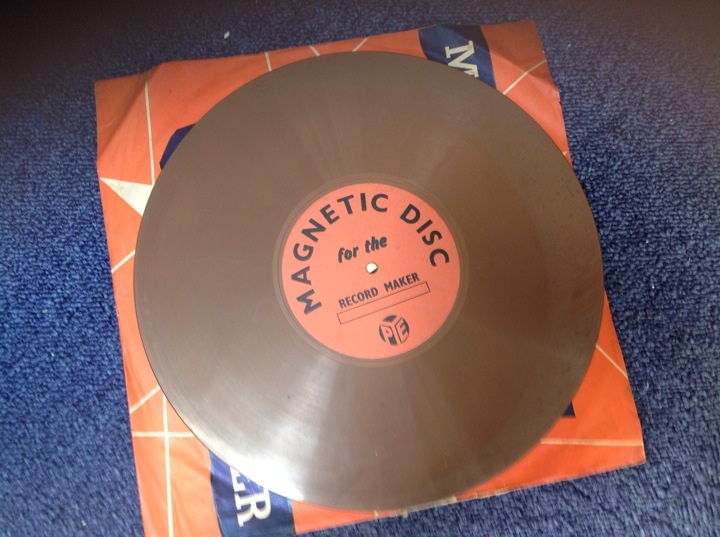 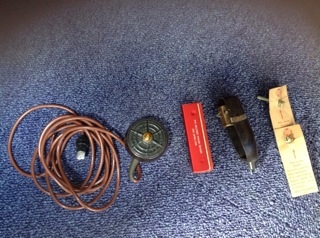 Excellent, you have all the sundries needed to make the RM work. And echoing earlier thoughts by another poster, this is the one to have: not the nasty later versions (the nastiest of which is in residence at the Dulwich Museum).

Unfortunately it'll be buried deep within the store, but I do have the Pye manual for the FenMan II RM.

Now we get to the interesting bit the record deck looks like any other deck of that period but this has the capability of recording
The set came with 1 magnetic recording disc , 1 recording head , 1 magnetic eraser & the original microphone .

Now....will it record video I wonder?

It will be very interesting to hear the recording on the disc, great news that it came with all the accessories

I expect there are few survivors of this model, I bet it cost a fortune when new!

I would never have expected to get the RM accessories, and I would not be at all surprised to discover that the magnetic disc might well be the only one the trio has ever seen.. It may well have been the disc that came with the set from new.

In any event, I'd be inclined to find out what's already on that disc, and maybe even copy it to CD-ROM, at least, as a part of the set's history (As long as it's nothing embarrassing or harmful to the previous owners).

You know that never even crossed my mind that the RM could have recording on it
How dumb is that ?

You are quite right of course if there is anything on the disc it's got to be worth keeping .
It will be interesting to play & see .
Despite the size of this monster it's very interesting I can't wait to get it working .

That is certainly an interesting machine.

I am curious as to how the TV sound is handled. Is it tapped off after the demodulator and then fed into the amplifier section of the FenMan II? Given the capabilities of the latter, it would seem to be a waste not to have done this. But then it was not unknown with TV-radiogram combinations for the audio switching to be done at speaker level, with TV sound left to use the customarily relatively poor output stage that was part of the TV chassis. And I think that other versions of the Pye Trio had separate speakers for the radiogram and TV sections.

And does the RM section have its own output stage to drive the magnetic recording head, or does it use the FenMan II output stage?

Given that the unit likely had a price that put it into the luxury class, the use of a relatively small TV screen size seems odd. One might have expected a full-sized TV.

Hi Steve, the TV sound is very conventional with the set having its own speaker . Not having looked into this as yet but I believe the TV is TOTALY independent of the radio section , I don't think you could record TV sound . The screen size is 17 inch , I believe this to be the normal size of the time .
It looks like the Fennman radio output is used to record on to the disc this being push pull EL84 output
As mentioned previously the radio/ gram has a huge speaker fitted in the bottom of the cabinet as well as 2 elliptical front facing ones all mounted in the radio section .
The record deck has a control that switches from playback to record & from internal to microphone recording with no mention of TV recording .

Thanks for the detail, Chris.

It is surely a shame that the TV sound was not routed through the FenMan II amplifier. I suppose the fact that the TV chassis was probably of the “live” type was an inhibiting factor, but that problem could have been solved with a small audio isolating transformer. But upon further thought, perhaps it wasn’t that simple with AM TV sound. With FM TV sound, and with an isolated chassis, one could typically tap the audio from across the volume control and feed it into an audio amplifier input of around 100k impedance with no audible adverse effects. I did this successfully with one or two NZ valve TV receivers way back when. But AM demodulators, particularly those with the impedances used back in the valve era, are much more sensitive to loading, and in particular, the AC-to-DC ratio of the load. I suspect that in situ, the loading provided by the volume control, etc., was often close to the maximum that the demodulator could accept without generating undue distortion, and that the additional loading provided by tapping across the volume control would generate distortion. Also way back when, I recall trying to extract audio from (isolated chassis) valve AM radio receivers by tapping across the volume control, and running into this distortion problem. In some cases using a very high impedance amplifier input (2M2) helped. Of course, this is why when, in the mid-1950s, it was desired to add tape recording outlets (“diode” outlets) to domestic radio receivers, this was done by using a high impedance divider (typically 2M2 over 47k) to avoid excessively loading the AM demodulator. This reduced the resultant extracted signal to something around microphone level, but that was not a problem as domestic tape recorders of the period always had microphone inputs (and not always “line” inputs). In the divider approach was the genesis of the later DIN “constant-current” tape recorder interconnection system.

So maybe successful extraction of the pre-volume control AM sound from a TV receiver would have required a buffer stage, say a cathode follower, to protect the demodulator as well as an isolating transformer. That would have meant an extra valve (or maybe a triode-pentode in place of an existing pentode somewhere in the line-up), and an audio cathode-follower in a “live” chassis might have been a bit sensitive to its location in the heater chain. Such modifications were probably non-starters from a production viewpoint.

The FenMan II itself was quite highly specified. Its FM tuner section had both a three-gang front end (relatively unusual in British valve era practice, even in hi-fi tuners) and a three-stage IF strip (typically associated with the better hi-fi tuners). The AM section looked to be fairly standard, but it did have delayed agc, something that was generally thrown overboard in domestic receiver practice when the FM-AM era arrived, probably because it couldn’t be done with an EABC80, and because Mullard, contrary to its earlier utterings about how important it was, had declared it as now being unnecessary. As I understand it, the FenMan II FM-AM circuitry more-or-less was used in the Pye HFT111 FM-AM tuner, although maybe without the AM delayed agc (no EBC41 with which to do it).