My new PYE set (well it's new to me ),can't wait to get started on this set . 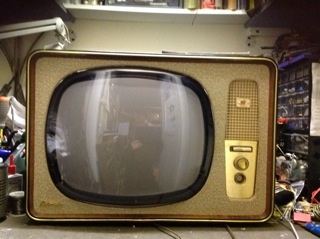 Nice looking TV, any chance of a photo of the chassis?
Frank

Looking forward to seeing how she goes !

Glad to see its arrived safely.
Look forward to seeing it working.

Can't wait to see this one come back to life.
Always wanted one myself.

I think this one has lots of sticky waxies behind the chassis particularly around the frame stage. As they all face towards the tube, they will be covered in strands of dusty black goo.....Be prepared for a mucky job! At the end however, the picture presented (assuming a good tube) will be well worth the effort.

I remember re-capping the frame stage on one of these when I was just starting in the trade.....just the sort of job to break you in gently when just starting out....!

One of my favoutite styles of set from the period. Seems to be a number of similar models though, some with model numbers in the five hundreds ?

Might the 500 number be the Pam or Invicta equivalent?

It was on display at Golborne last weekend, definately Pye - er, I think. No, pretty sure it was.

Hi guys as requested here is the set with the back removed.& some other interesting item too . Yes a brand new , never used remote & as the box says
Remote control unit assembly
For
PYE
Auto - tuning receiver 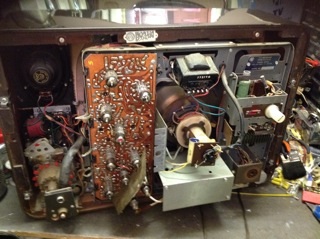 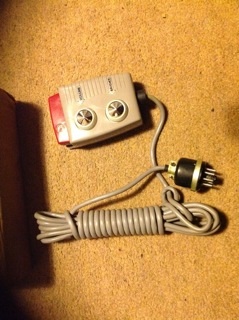 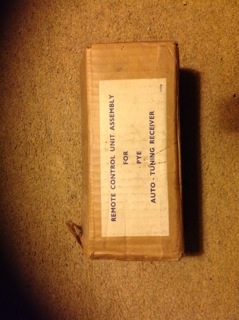 I decided to power the set up today . First a quick check over ,no shorts found .just check the fuse , good job I did too some one had fitted a 10 amp fuse ,correct fuse fitted so time to power up

. The first thing that sprang to life was the motorised tuner good job I know these sets because that could frighten the c.....p out of you !
I have heaters , sound ,line whistle going well so far , No raster then I notice the heaters on all the valves seem very bright . To cut a long story & all that it was the PY81replacing that put the heaters back to normal brightness crt heater measures 6.7 volts .
Now I have first light ! 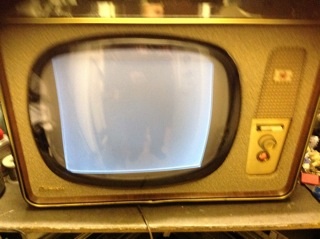 Thanks for the photos, not worked on this chassis, the first Pye TV chassis I saw was after they bought out Ekco/Ferranti.
Looks nice and clean and relatively easy access, and you have a raster. Looking forward to a 405 picture.
Frank

Nice telly, I have the manual version. But I love that motorised tuner and a brand new remote to boot

Replacing the caps is not a pleasant job, watch for lifting tracks when desoldering.
I found it better to use desolder braid than a sucker.

Got to confess, I do like these "bug eye" sets.. The style seems to suit the CRT face presentation, and always seem to shout out "Top Of The Pops" and "It's Friday, It's Five O' Clock, and it's Crackerjack"....

What a find that remote control unit must be.. Rare in its day, like moon dust today!

I thought I would check those caps you know those horrible gooey ones but hey someone has beat me to it they have been replaced with the small grey RS ones .
Thinking this could have been done ages ago I'll check them anyway
All fine but I did find 3 electrolytics that had not been changed , 500uf 6 volt in the video circuit , a 25uf 50 volt in the sound circuit & a 16uf 275 volt ht 2 smoothing all of these are o/c no readings at all on the old cap meter. Checking around the pcb I also found 3 .1uf caps at the bottom of the board that hadn't been changed the gooey ones & boy where they gooey .
The next thing to look at was the lopt nothing out of the norm with the transformer in fact it's very clean . Someone had replaced the boost cap on the lopt with a modern thing of the pcb type so I replaced this with a new axial type .
Power up again , not a great deal of difference in the raster , checking the HT line I found it to be low 170 volts instead of 225 volts . Replacing the selenium rectifier with a BY127 & a series resistor of 60 ohms produced an HT of 227 volts close enough .
A full raster greeted me

time to put a signal in, a nice test card frame a bit out of shape , a bit of adjustment ? NO the Lin pot 2 meg wouldn't work & required replacing also R57 820k was high in value (1.4meg). Now I have a cracking picture , see what you think.

I've just noticed behind professor Matic is the crt surround off a PYE 11u !
Probably not but it's only a bit of fun 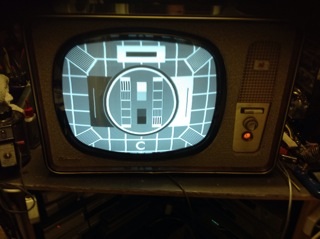 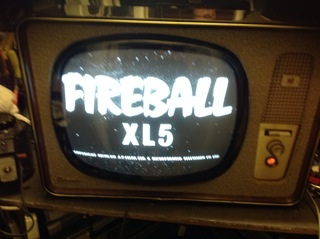 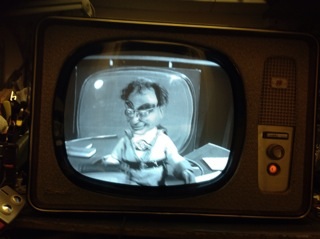 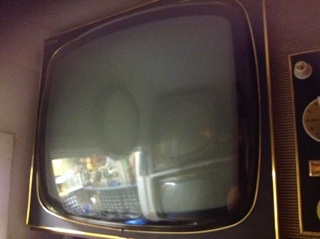 That was too easy, my fingers kept getting stuck together when removing all those gooey caps

These do produce a good picture, though my CRT took an evening to fully awaken from it's 35 year sleep!

That's the second set that was a bit too easy . I have a PYE TV2 now that really is a challenge I'll have to post the story so far on that one

Is that the set you bought back in 2010?
I remember reading the thread over on UKVRR.