Hi all I had a bit of time over the last few days so I thought I would have a look at my Marconi 950. I bought the set some time ago because it was one of the models I used to play around with when I was a kid.
The set was quite dusty inside. previous repairs seemed to be no more than a couple of replacement valves. The PY was cracked so this was replaced, after that the set produced a dark picture with low width, rolling very fast and occasionally collapsing to a line. There was also no sound.
I gave the chassis a careful clean and then started recapping the line output stage. almost every plastic blue capacitor was leaky. Two of the brown moulded ones had swollen and split and read open circuit.
I tried the set after every few capacitors had been replaced and things improved bit by bit, the brightness came up, all the cogging and bending stopped and finally after replacing the capacitors in the frame stage I had fairly good linearity that responded to the controls.
This left the low width with the control not working and no sound.
The low width was just the 1.8 meg in series with the control being very high. I then moved on to the no sound.
A quick flick around the PCL86 showed voltages to be much as expected. I checked the connections to the speaker and then the speaker to find it was open circuit. I can't ever remember having an o/c speaker in a telly before!
To replace the speaker I had to remove the UHF tuner which was a right fiddle to locate correctly when refitting!
After a bit of setting up the set produces very good pictures on both standards, The Mazda "Gold star" has plenty of life left!
However the set has an intermittent line twitch I didn't notice it while it was on the bench but once on the shelf playing a DVD I noticed the picture (or parts of it) sometimes twitches slightly as if the aerial plug was making a bad connection or the line hold pot was scratchy,
It does it on both 405 and 625 both on playback and test card. sometimes it settles down for a while but it is very irritating!
I cleaned the valve pins and holders when I recapped it but that's the sort of symptom it looks like.
I will get it back on the bench at a later date, in the meantime if anyone has any ideas what to look for would be greatly appreciated!
I apologise for the poor photo's I really need better lighting in my telly room! 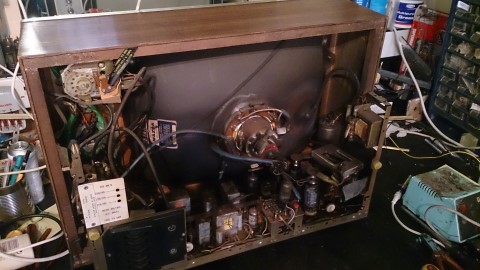 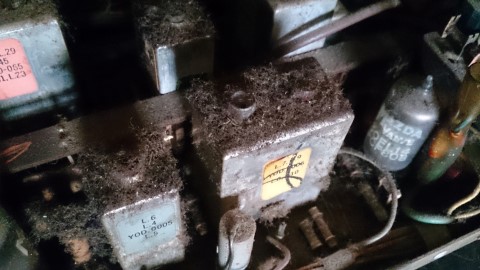 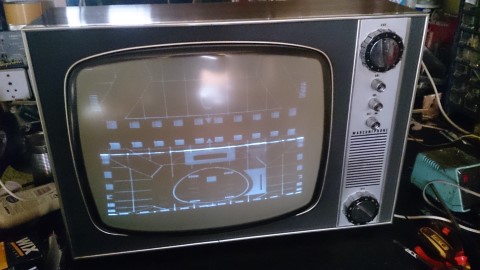 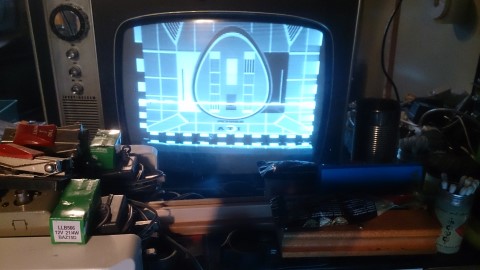 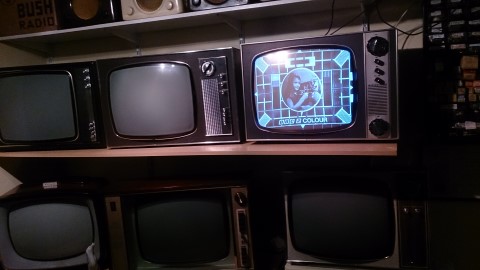 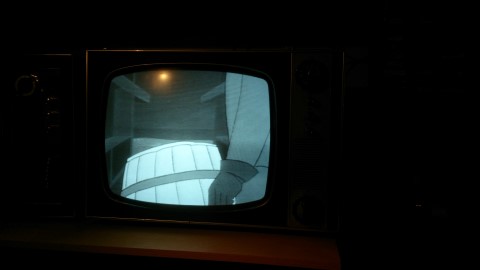 I remember years ago having a Ferguson version fitted with a 950 MKII.

It had a similar problem as the one you describe, and I found it was the tripler intermittently tracking across one of the elements. It was more obvious when the atmosphere was a little damp.

I agree, small flashes or line twitch is usually eht tracking over. In the dark you may see it, in a quite room you may hear it too.

Also if the set has flywheel sync, it could be the diodes....another line of thought.....?

Rich's set does have flywheel sync, the little daughter board with the EF80 and pre-set line hold can be seen in photo 1

Could well be the EHT tray. Note this is a half wave rectifier tray in the original 950.
The earthing spring across the CRT could need cleaning. I once had a similar problem due to this.

Thanks for the replies, I'll have a look at the tray in the dark once I get the set back on the bench. I think I may have a suitable spare if needed.
I did have to remove the dag earth when I changed the speaker as one of the speaker fixing screws was used to anchor the end of the dag spring. I remember putting it back as it was a bit of a fiddle, but I will check that it is secure and a good connection.

Failing that I will try the discriminator diodes. By coincidence I am in the process of changing them in a dual standard Murphy at the moment, The picture on that set is cogging badly and the line hold needs resetting every time the set is switched on. they are those horrid black blocks like the one that caused sync problems on the later A640 chassis.
Years ago I can remember having sync problems on a Pye 14U and being recommended to remove the optional flywheel sync board and return the set to direct sync by an old salt that I used to pester for advice.

His opinion was that it was more trouble than it was worth!
I won't be carrying out any such butchery on this set though...

Thanks all! Its fixed!

I could hear a very faint sizzling noise from the line stage, it was only audible on 625 as despite this being a quiet set line whistle wise on 405 the whistle drowned it out.
I removed the tray and gave all the sticks a good clean, there was some nasty sticky dust inside the case.
The twitch has gone! The discharge must have been slight as there was no tell tale ozone smell. I will keep my eye on it for and I will replace the tray if there is any sign of reoccurrence.

Glad you got it sorted. If your set has the original red Jellypot Lopt the 405-line whistle will be really loud.
Brian