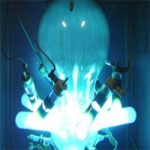 For 15+ years I have had a couple of Thorn VHD players, model 3D01, from the early 1980s. VHD was a short-lived interactive videodisc format developed by JVC that caught-on for niche applications in Japan e.g. karaoke, but hardly at all in its Thorn guise in the UK. It had a similar-but-different feature set to LaserDisc, against which it was designed compete, although it used an electrostatic pickup to read the disc instead of an optical one. Despite its versatility it had a couple of significant limitations, although more than anything else it fell victim to the intense format wars occurring at the time.

The Thorn 3D01 players have random access navigation down to 2-frame GOP level, controllability over serial I/F, noise-free slo-mo, dual or stereo audio and other features that were cutting edge in 1983. Earlier today, when unpacking them from storage, I gave them a quick spin. At the moment I have only a couple of discs and no spares or manuals, but if I am going to put these machines on display and operate them occasionally, I should be amassing some more resources. Discs can be found occasionally, but what about technical info... anyone got a service manual? How about spare styli? Who else has VHD discs with UK-made content, or (assuming there was such a thing) an alignment disc?

For more info on these machines, you can see one of my players on the EK site here: http://www.electrokinetica.org/d2/3/index.php

If the video clips don't play in your browser, you can see them on YouTube here:

And there's lots of material into the system on VHD Discworld, which although not UK based has a page with content from a speech given in 1984, (paradoxically in Nebraska) about the UK launch of VHD, here: http://disclord.tripod.com/vhddiscworld/id13.html

Any and all info would be appreciated.
TIA
Lucien