After reading Rich's Pye 11U thread, I thought I would ask what Philips chassis this Stella set uses ?, and about which dates it was current?

We had a similar one of these on rental complete with spindly legs and magazine type wire rack underneath when I was a nipper, probably early to mid 70's, it seemed a bit old fashioned even then when compared to our more well off relatives sets.

It was dual standard, and I know we watched it on 405 because we did not have a "BBC2 aerial" (UHF) at that time.

I don't know if the legs and stand were original or not, I do recall one of my grandparents also had a similar set to this at the time but I recall that although the style was very similar it was not identical, but unfortunately I cannot remember what was different about it, I do remember one of them was a lighter more silvery colour and the other a more yellowy/gold in colour but that is about it!

Did more than one chassis get used in that cabinet style ? as I cannot really remember the two buttons at the bottom (although they could well have been there and I don't remember), or at least not in red shown in that particular picture.
I don't remember the red badge shown on the left hand side either, I seem to think the Stella name was a black transfer type similar to the markings around the controls, only larger and above the speaker slots on the RHS.

Not much to go on I know, but this is trying to remember way back for me, any other information would be a bonus too.
I could even be slightly mixing up memories of the two sets (those of ours and those of my grandparents).

I cannot remember where I even downloaded that picture from, it may even be a member on here's set. 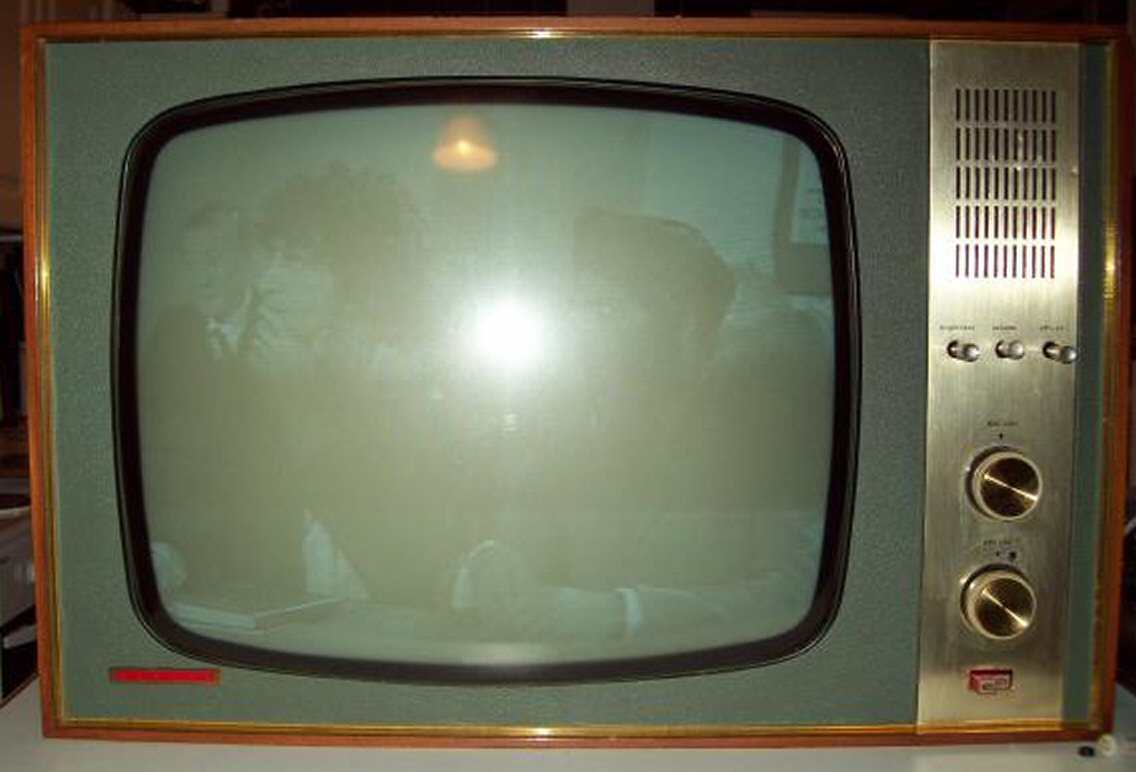 Date, judging from the style and the lack of a push button UHF tuner, about 1966/67?

I can't imagine many large-screen dual standard sets being issued with rotary UHF tuners after the Postmaster General had outlined BBC1 & ITV going UHF (which, of course, was a couple of years before transmissions commenced).

Thanks for the response so far

Going by the model numbers given by Taz, I found the LLJ article for that model, the article was dated Dec 1968, presumably the chassis was introduced a few years before then, so it may be even earlier than that date given by Aidan.

), so it was likely an older model.

I think this was the second from last B&W model we rented, as I vaguely recall a B&W bush set with BBC2 after this one followed by our last rental set which was colour and a PYE G11.

I can just about recall a previous rental set, which was a console set (which seemed huge to me at the time), this set had a built in radio, I was only just starting the infants and I can remember my mum listening to the radio on it while getting me ready for school circa 1972.

I don't know the make of this set, but I can remember the channel selector, this had white "cheese triangle" shaped push buttons arranged in a circle, around a centre red button (amazing the things you remember !), it had a distinct Murphy look judging by photos I have seen since, this would have been a band I/III model I would presume ? we always seemed to rent older models, maybe lack of money at the time.

Obviously my memory of these sets are very vague, I was only little, but I must have been interested enough even then! there may have been other models rented in between but they don't stand out like these do.
I can recall the "Telly man" making fairly frequent visits to breakdowns, I was probably parked on his shoulder