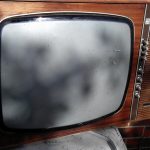 Two stand out for me, both sometime in the 70's. I was feeling unwell  it was quite late at night and I came down stairs, my Mum was still up and the tv was on, but my Mum was reading, I sat down stairs feeling like I would throw up, and I did in a big red bowl, after being comforted I felt much better. On the tv was Patrick Moore, Sky at Night, it must have been a live, late night broadcast, because the first at-least 10 seconds he was picking his nose and might have said "are we ready" with a shocked look. My Mum still remembers this.

The next was a charity snooker event with Richard O'Sullivan, it too, was a live broadcast, because after he leaned on the table to take his shot he "farted" and red faced said"sorry" my Mum remembers this too. I would love to see these two events again, and find out the year broadcast!

One more from 1991. I was watching an episode of "Bottom" on BBC2 and at the end titles when they reached the production year MCMXCI the video froze for a second or two then went into a fast rewind search with nearly the entire show in reverse lasting around 2 minutes with an apology " sorry about that Gremlins in the works coming up next ..."

Not unusual but memorable items on TV I watched were:

The reception of live TV across the Atlantic via Telstar in 1962, but we had to try again the next day due to wrong antenna polarisation at Goon Hilly, the first day they were relayed via the French ground station  at Pleumeur-Bodou and the Euro Vision network.

Absolutely for sure, my first colour TV experience was at "Queen's Hall" in Leeds. It would have been in the latter half of the 1960s, just as colour TV was being launched. We (the entire family) wandered around this amazing exhibition of colour TV, and I reckon we must have seen just about every make and model that was there from the start.

I distinctly remember the Philips stand, and soon after the PYE and then Bush (would it have been Bush/Murphy at that time? Or even RBM?). The Ferguson bods were proudly boasting their "all transistor" design, and it's being the only such design available.

Remember, I would only be around 9 or 10 years old at the time, and although it was all very interesting from the technical stand point, the most outstanding memory is of the demonstration film that was being shown at the exhibition, and was all about the construction of the Aswan Dam. To be honest, to a ten year old, the film was far more interesting and absorbing than the technical stuff!

I seem to recall that "Antiference" were there with a large stand showing off their various aerials, for 'good' 'poor' and 'average' reception conditions, along with a map of the county showing which aerials would be required in which part of the county.

Oddly enough, we didn't get a colour telly! My dad's comment "Not tried and tested enough, not proven its reliability yet - we can wait a bit and see how it goes..."

I think it would have been 1967, or 68..... We didn't get a colour telly until I bought my first one in about 1976, or 77!! A good old Philips G6 that spent more time with its back off than on - it ran very well with the back off, but put it back on and the set would complain in the heat it generated, but then it did gobble a hefty 500W, or just over - about 3 to 4 units of electricity on a typical day's/evening's viewing.

I distinctly remember the Philips stand, and soon after the PYE and then Bush (would it have been Bush/Murphy at that time? Or even RBM?).

Definitely Bush/Murphy as Bush took over Murphy in 1962; I'm not sure when it changed to Rank Bush Murphy (but about then springs to mind), Rank Radio International was mid/late 70s.

Not early but the oddest viewing experience I had was in the early 1990s. I had dozed-off in my chair as I often did late at night and was woken by the sound of the remote control falling on the floor to find what appeared to be an episode of The Phil Silvers Show (aka: Sergeant Bilko) being shown in full colour!

To this day I'm not exactly sure what it was I saw? It may have been a clip from a colorized video, a movie in which Phil Silvers played a character very similar to Bilko or perhaps I was still dreaming?

A quick Google reveals there was indeed a colourised (or colorized?) episode of Bilko.

Thank you all for your cracking memories ? I enjoyed them all  ?  Looking forward to anymore members may remember!

Thanks Cathovisor, I'm aware of the existence of a colorized video and it's possible it was played by Mariella Frostrup on her programme Video View but I'm still not sure if that is what I saw. Have also searched IMDb for similar Phil Silvers movie roles without much success.

Again not really unusual but in the early 1970s a university friend invited me to see his parents' large SABA colour tv. I can't remember the model or screen size but it was big. I was absolutely amazed at the perfect convergence, high definition and Kodachrome quality of colour rendering. To say I was impressed is a gross understatement.

My first memory of colour TV would be in 1969 - no, not the moon landing. I had just found radio amateurs on my home-built one (or possibly I had expanded it to two valves by this time) short wave receiver. They were clearly local - I subsequently discovered that I had found 'topband' - and, with the help of one of my schoolmasters who was a G8 and possessed an RSGB Call Book, I located the various stations, several of whom were a cycle ride away. I received QSL cards and encouraging answers to my admittedly hardly useful schoolboy-scrawl reception reports and various invitations to visit the shack.

One amateur I visited on a Saturday - we had no phone at home so these visits were done on spec - was clearly fairly well heeled and had his operating shack featuring some fairly expensive KW gear in one corner the living room and in the opposite corner was a colour TV. He and his wife were watching a variety programme and there was an act playing where puppet animals with white and bright red tunics were dancing across the screen on a blue background. I was entranced by this: it was so stunningly bright and clear in 625 lines when compared to our 405 set at home and I can see it now. I have no idea of the make of the set. I remember him saying renting was best because of the high cost of repairs. I was in my early 20s before 405 was abandoned and a colour TV arrived at home. I think this was a Ferguson TX or AX or something with an X in it.

Subsequently, I visited many of the local amateurs and would get excited when I got a name-check when the local nets were operating. I joined what was the most active radio society in the area but as this was a couple of towns away it was not an easy journey and I usually got a lift home despite the fact it was invariably well out their way.

It's not the sort of thing any child would be encouraged to do today - in fact I don't think such offers would come - but I met with a lot of encouragement and kindness and never experienced any harm or even a hint of worry. Happy days.

I didn't actually see this in colour as we had a b&w set.

'Camberwick Green' was the first BBC 1 programme of the day. Test Card F was transmitted with music.

Suddenly a "Temporary Fault" caption appeared in place of the test card, the music continuing as normal.

After a few seconds of blank screen the start of ''Camberwick Green" appeared upside down briefly before the test card reappeared.

I didn't actually see this in colour as we had a b&w set.

'Camberwick Green' was the first BBC 1 programme of the day. Test Card F was transmitted with music.

Suddenly a "Temporary Fault" caption appeared in place of the test card, the music continuing as normal.

After a few seconds of blank screen the start of ''Camberwick Green" appeared upside down briefly before the test card reappeared.

Ah, the joys of playback off Telecine... 😀