Well after an epic 300 mile trip I have an Acoustic Deluxe. Lucky it was very cheap so the drive ws worth it and I've wanted one of these for a while. Sadly no stand so if anybody has the matching stand for sale i would love to buy it.

Anyway got the set up on the bench. It's in fair condition though quite gruby with a few chips on the case. Not sure whether to refinish it or just clean it up and touch in the marks.

It powers up . The crt is weak on the blue gun and slow to warm up but as it's been out of use for 20 years I think it will improve. There is no chroma at the moment. Also the frame scan amplitude jitters in amplitude a bit like a noisy height control bit it's not.

Still I think it's in with a chance of making a decent set. Some pics attached. Will update with progress as it's made.

Frame jitter or a type of flutter can be a fault in the thyristor power supply.

The white cabinet can be smartened up with aerosol paint.    Back in the seventies a customer ordered an "outrageous orange" CV2215 but before long got fed up with the appearance of the thing and so the set was returned to the workshop for a respray in Ford diamond white.   Attachment shows the RRI approved modification to the power supply board.

Thanks for thd mod sheet Till!

The ht rail is rock steady at 200v and the width is steady too. It's just the field amplitude that jitters about 3 or 4mm . It's intermittent too. Though no amount of tapping with a screw driver handle provokes it so it looks like a field timbase component causing it. I don't think it will easy to find. I think I will start with repacking the Callins caps on the timbase board. The  got to sort out the lack of chroma on the 2 chip decoder.

Check the pincushion and the R/G balance pots on the scan correction board, give them a few swings from end to end as they may have an intermittent dead spot and was known to cause frame jitter. Something to beware of with the A823 series is that they can be very fussy connected to an isolation transformer, anything rated less than 500VA can cause bouncy pictures symptoms due to flutter on the 200v rail when actually the PSU is blameless.

The beauty of a finish like that is that any chips can be filled in and smoothed flush with wood-filler. Then re-painted.

Check the pincushion and the R/G balance pots on the scan correction board, give them a few swings from end to end as they may have an intermittent dead spot and was known to cause frame jitter. Something to beware of with the A823 series is that they can be very fussy connected to an isolation transformer, anything rated less than 500VA can cause bouncy pictures symptoms due to flutter on the 200v rail when actually the PSU is blameless.

From memory there was also a PSU fault like this that disappeared when the set was on an isolating transformer! But yes, 500VA is the absolute minimum rating for sets like this as John says.

So we hav some progress. For no colour fault there was a dead spot on the ident preset. On the later decoder the ident control is rotated fully clockwise to overide the colour killer action. As soon as I rotated the control the colour came back. Cleaned the preset and set up the ident and good as new. Not often you get an easy decoder problem.

Frame issue responded to replacement electrolytics a replacement height control and a good clean of the other pots in the field timbase and vertical shift circuits.

Had to boost the crt as blue gun was very poor but looks ok for now.  So it's on to the case. A complete strip down and refinish is the next job. Good job I've got a couple of days off work ?

That's looking good and not too much work required to get it going. Just the cabinet to sort out now.

I also have one of these in 'the pile' and it is also missing it's stand.

RBM did use Toshiba CRT’s in some of the A823 sets so it’s probably original.

The 20" Murphy CV2011 was supplied with a Toshiba CRT.  In those times I'd guess Toshiba was nothing more than another source of CRTs but later on in 1976 the newly introduced Z718 series used Toshiba inline tubes exclusively.  Late 1977 RRI returned to using Mullard  CRTs in the awful and best forgotten T20 series.

Posted by: Till Eulenspiegel

I thought it was just me who didn’t like that chassis.  ?

With the eventual joint venture between RBM and Toshiba, I wonder if the use of Toshiba CRT’s was the start of the venture?

Re the T20, I was lumbered with these as part of my rental fleet, reliability was bad, the G11 was far better, especially for some reason or other the Pye versions.   The 30AX equipped Rank T26 wasn't too bad but very few were made.

I seem to remember there was a T24 badged under the Bush brand but looked to be a Toshiba chassis . It wasn't too bad iirc

The T24 was the Ennesettle factory assembled version of the excellent X53B Toshiba chassis.   Does 20" Bush model BC7200 come to mind?  A Murphy branded version was available but for some reason or other I never bought  any, was it the MC7200?   A UK made 16" portable was also available which used the Toshiba chassis.   Bush BC7300 was a T26 model.

Hi Till. Yes the 20inch  Bush Is the one I had in mind. I never saw a Murphy version though. We used to get a lot of T24s come in ex rental from Granada when I worked at a firm that refurbished and sold ex rental sets. They never have any trouble once a few dry joints had been attended too.

I had one or two Murphy badged T22s at one point, these had a normal push on-off switch as opposed to the pull on combined volume/on-off switch as the Bush version of a similar model IIRC.

I don't recall seeing a Bush version of the much more modern looking (IMO) Murphy versions that I had ie. the Bush versions looked more dated for the time,  that is I don't know if such a Bush model actually existed, or if I just never saw one. 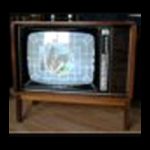 I have recently restored one of these, i bought it from the NVCF. I t needed quite a bit of work as i believe it had been stored in damp conditions. All the electrolytic's, including blue coloured Philips types were leaking, there was rust on the chassis and the paint, (originally manky green) was ridged and crazed. The cabinet was stripped, rubbed down and filled. then it's had primer and 4 coats of 2 pack Orange. Other faults were normal stock faults, the A1 decoupler went short circuit, the two 56k bleed resistors across the main HT electrolitic's had gone low in value.

I also did not get a stand with the set, it had already been sold separately before i bought the set. So i have fitted a standard castor stand until a chrome one comes along.

Good luck with yours!

Hi davidh. That looks fantastic in orange. I did seriously consider a colour change on mine to orange but have decided to stay with the original colour. My set is stripped and the cabinet is in primer. Top coats going on tomorrow hopefully.  Will put up some pics once it's painted. I have bought a 1970s pedestal table off eBay which as an identical looking chrome pedestal base on it which I hope to be able to remove and fit to the TV.