Let's find out if that frame linearity fault can be fixed once and for all. Just about everything in the frame timebase has been checked except one component, the scanning coils. Along with the original metal cone CRT which went down to air many years ago, the scanning coils were supplied by RCA. After removing the CRT neck components and the metal screen which is fitted at the rear of the scan coils I noticed a fair amount of corrosion on the tags which connect to the coil lead out wires. You never know, I might get lucky and the frame linearity fault could just be bad solder connections.
These early colour CRTs have a 50mm neck. I'm also on the lookout for a replacement CRT socket. 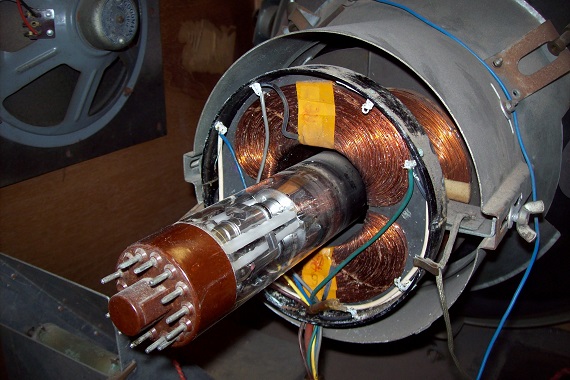 Hi David could this be this years contender for the queens speech ? Would HKS not have a tube socket for it regards Bob

Hi Bob,
Ready the set for the Queen's Speech? That's a good idea. We know the set works, in a fashion, but since the set has been in my possession (it was acquired by me in 2001) I've never come up with an answer to the frame timebase problem.
Later this year the Pye colour set will be sixty years old.

Hi Bob,
I have another early colour set coming up for restoration. This one is a dual standard hybrid. The Pye is with the exception of a few crystal diodes all valve. Not a transistor in sight.
So what's to be, the Pye or the mystery newcomer?

Would HKS not have a tube socket for it regards Bob

I've tried searching ebay without any success. Didn't some scope tubes use this base?

Hi Till,
What type of socket is it and what's the tube?

Hi Bob, I'll have a word with Ed about the tube base.

Hi Jon, The CRT presently installed in the Pye is a Mullard AX53-10, it's an all glass round faceplate tube and is similar to the American 21CYP22.
The original CRT was the RCA 21AXP22 which is a metal cone type. This tube has gone down to air as most of these metal-glass tubes do.
The AX53-10 was made by Philips in Holland. Used in the Philips K4 CTV.

I believe the Philips roundie has a brown tube base whereas the RCA one is black?

That's correct. That's how the tubes I have here are like.

That tube base looks familiar ... 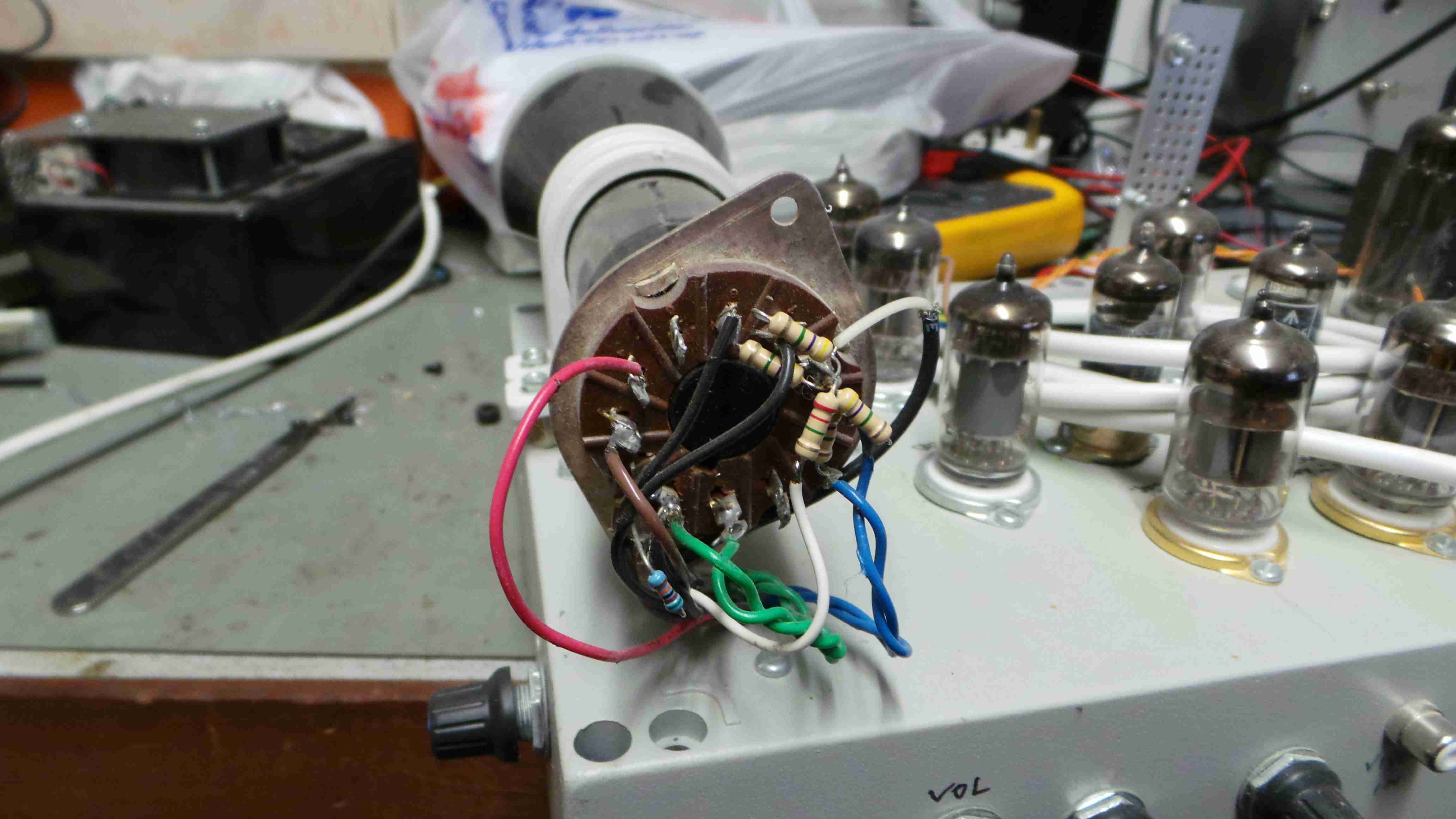 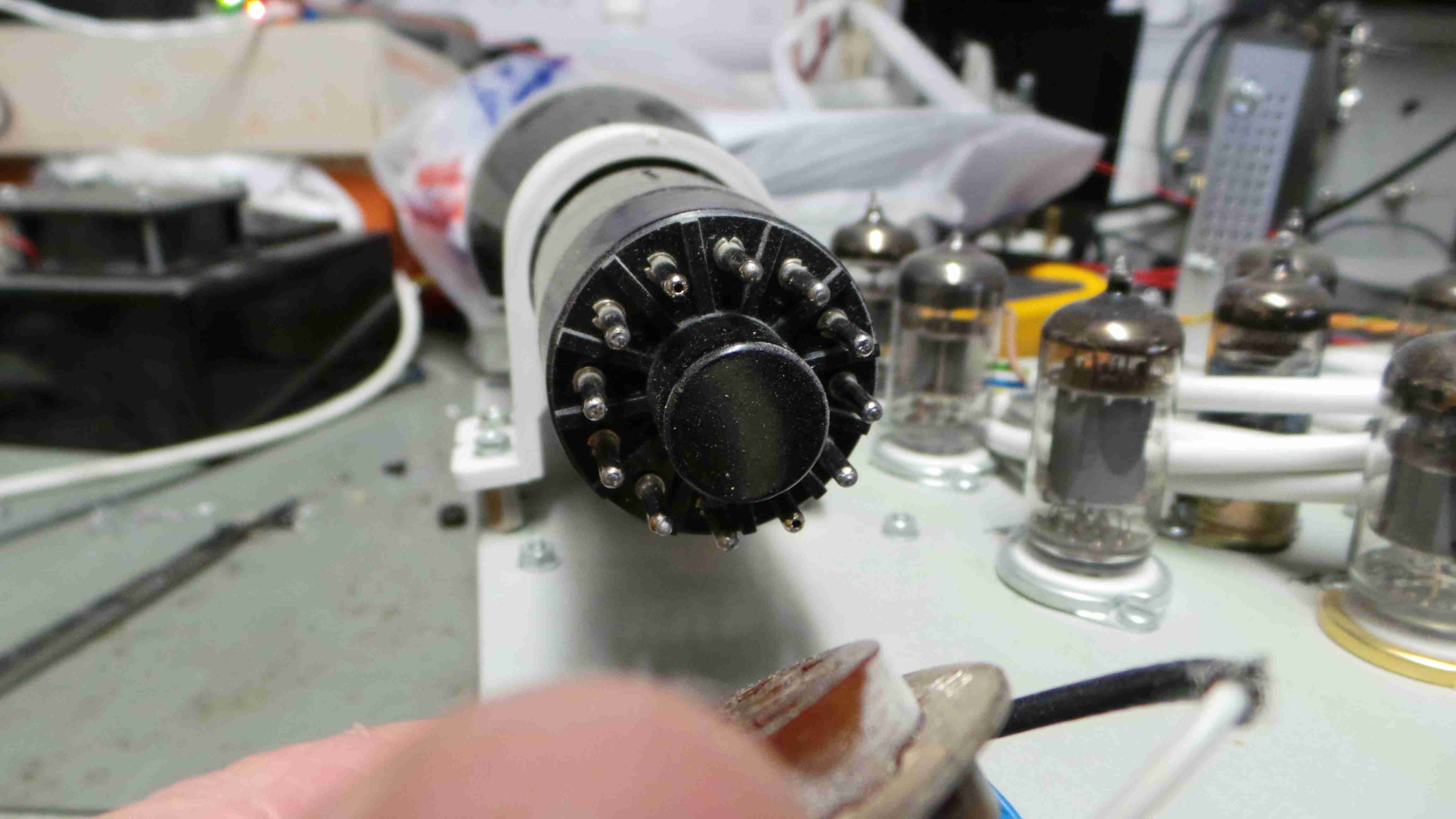 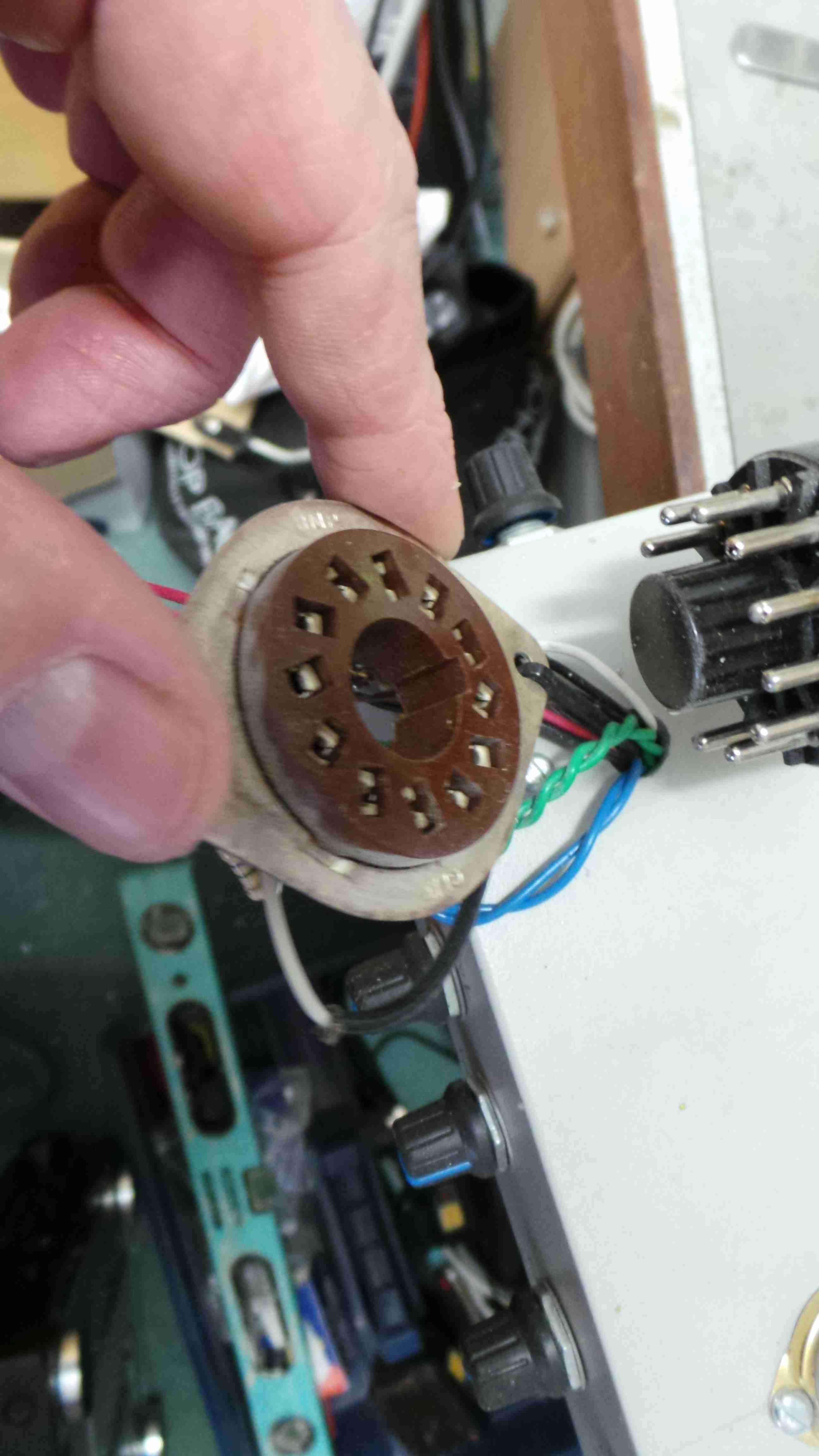 I got the base from eBay seller "Michael's elctronics emporium" if memory serves.

Hi from RR. What a revelation this is, I never knew there were 405 colour sets made, I thought colour was never used on 405, only tried out experimentally. Didn't colour not start in the UK until 1967? How come there was CTV's here in the 1950's? or were these sets made for export to the states, I know they had colour in the 50's, but they didn't have 405, did they? or did they? or were these made for Europe? I thought the US always had 525 lines. What colour system were these PYE sets made for? The power consumption must've been phenomenal with a 50mm neck and all valves and I thought the B&O 3400 was high on power at 360w. How much power did these sets use? RR.

The first demonstration of colour that I can recall was at the Earls Court Radio Show.

I can't remember the year but it was well before we had any 625-line transmissions in this country.

I was 14 when I went to the Radio Show for the first time - that would have been in 1958 - but I'm sure it was later than that. However it would have been before the Pilkington Committee decided in favour of 625-lines as the future UK system and quashed any ideas of colour on 405-lines. That was in June 1962 so I'm guessing that the demonstration was around 1960.

It was in a special gallery and featured sets from all the manufacturers side by side so that visitors could walk past this continuous stream of colour sets.

One of them, I recall, was looking decidedly sick. I think it was the GEC set but apologies if I've made a mistake!

The demo consisted of a continuous sequence of slides and test films - the same ones that were shown in the colour test transmissions on BBC-TV* - on 405-lines, of course! - from Crystal Palace every afternoon in lieu of the test card.

The 405-line colour TVs were built for evaluation purposes only, none were marketed. The trade feared that if the consumer thought that colour was "right around the corner" sales of B&W sets would dry up. For that reason there was very little mention of the subject in the trade press at the time.

The Pye is extremely rare in not having been adapted to 625-line PAL colour operation at some time in the 1960s as almost all the other surviving colour sets were.

It's a pity that the APTS couldn't get the aspect ratio right! It looks as if it has been cropped to 16:9 and then shown at 4:3.

By "variation" I presume you mean 'adapted for the 405-line system'.

It's a pity that the APTS couldn't get the aspect ratio right! It looks as if it has been cropped to 16:9 and then shown at 4:3.

Unfortunately, very common with 4:3 material on YouTube but I'm not sure where the error creeps in - it looks like it's been double-ARC'ed. This is correct in terms of aspect ratio but seems to have very low level sound.

By "variation" I presume you mean 'adapted for the 405-line system'.

Isn't that what a variation is? A change or slight difference? A different or distinct form or version of something? Mere semantics.