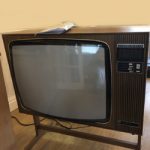 I'm looking for a service manual or advice on this set.  TIA

Hi and a warm welcome to the forum. ?

Which internal fuse? On the Power Supply board there are two, 7FS1 & 7FS2. If its 7FS2 that keeps blowing then its highly probable that 5C15 a 0.33uF capacitor on the line scan coils is s/c.

I do have the full service manual for this model but its not scanned yet and there's quite a lot of it. I hope you understand and appreciate, being a new member you have not yet earned access to the "active members" forum data library. Sadly this stance had to be adopted because we used to have many folk turn up just for data, then never to be seen again once they had what they wanted.

Having said that I do provide reams of"free-to-view" data and recently posted about this in a thread here. You will be pleased to know you can find a useful article to assist you with your TV in the service department section covering colour TV's and it does have some circuit examples included.

Anyway, you've come to the right place and I'm sure members many of who are ex-trade will chip to help you tackle your fault.  In the process as you post details and photo's to document your efforts on the forum, you will be gaining those all important points towards full access.

One thing we need to know is your level of experience and what equipment you have to hand to aid the repair.

thanks for the swift reply, it’s 7FS1 that’s blowing, I purchased the set off Facebook and have a plans to have it working and set up in my dining room (so I can escape Love Island, Ru Paul etc - missus and daughter hog the plasma in the lounge ;). I love the old style TVs and watch many restoration videos on youtube.  I’m not a TV engineer but I served a four year apprenticeship with the MOD working on Army Radios (and various other kit) & did the BTEC HNC. I used to do the odd foreigner for mates but had a colleague who was ex TV engineer for guidance, I also worked for GEC on government comms kit - but have worked in IT for the last 27 years.  In terms of kit, I have a multi meter and Soldering iron but willing to buy additional tools if necessary & happy to contribute to the site (perhaps IT support 😉 and/or financial.

I was thinking of installing a PC fan inside the TV for cooling too, with it being analogue I’ll need to add a freeview box either via a RF modulator or perhaps there’s somewhere I could tap the composite feed in after IF stage etc.

7FS1 is a anti surge fuse (AT), it will need the same type. How does it blow, just parting or black and burned inside the glass?

Check the capacitor across the mains input, degaussing circuit and bridge rectifier components.

I remember the sets but they didn’t give me much trouble in their early  years.

It’s black and burned, i’ve checked the diodes and did a quick visual on the caps but will get the meter on the caps & have a good read of the data you have kindly posted.

7C7 is suspect, if not it still appears to be a problem in the first part of the power input.

If a meter doesn’t show 7C7 faulty you can still remove it in case it’s breaking down under 240vac. It will require replacement but on a clean AC supply the set can be switched on for a quick test without it.

If you install a fan it will need to have a low magnetic leakage, think thats the correct term, anyway any unwanted magnetic fields can upset the purity/convergence of the CRT colours.

I would get the set working and reliably  before trying modifications.

The capacitor mentioned by Chris is worth checking as a matter of course, also check for leaking/bulging electrolytic capacitors. They are perhaps not the present problem but worth checking for reliability.

Thanks for the replies chaps, will test the Caps tonight, when it comes to replacing the offending components can you recommend any suppliers in the Merseyside area (now  Maplins are no more 🙁 ) or is on line the way to go?

ok, spent an hour on this tonight, I removed 7C7 but 7FS1 still blew, but no fizzing/arcing and the audio (white noise) kicked in for half a second before the fuse blew so i disconnected the loads hanging of the psu to test it in isolation and the fuse still blew so looking like psu imho.  I have tested the resistors and they seem to check out -  7R2 (470) was reading 360 in circuit so assuming the components in parallel with it are causing the dip, might unsolder it tomorrow to be sure, I couldn’t locate 7R3 (2K) though

Did you try disconnecting the degusssing circuit?

you say you've checked the diodes and I would imagine that those checks were done in circuit?

The reason I ask is recently I was faced with a PITA bridge rectifier (4 x BY127) on an N1500 VCR. When the diodes were tested in circuit, they gave perfectly sensible diode readings on the multimeter. These tests fooled me for a number of days, that was until I finally tacked some new ones in parallel. Low and behold this allowed the bridge to work albeit a bit odd on the output (due to the paralleling). Once I removed the originals and replaced all four diodes with 1N4007's the circuit functioned perfectly.

I then tested the now out of circuit diodes, two tested bad whereas in-circuit they looked fine, this was not what I was getting when they were in-circuit. You can read about that here.

As you say you have isolated all loads including degauss, confirmed all caps and resistors, that leaves very little else on that PSU module to be faulty. To me it leaves a nagging doubt over the diodes. Even if they do prove to be innocent out of circuit, at least you will have truly eliminated them from suspicion. As you no doubt can see, the power supply on the Z718 is very simple, just a bridge rectifier and a smoothing cap.

What about TH1? Ok I'm clutching at straws there ?

This helps those unfamiliar with the Z718 PSU, there's very little on the board or much to the circuit

A couple of things, can you confirm the PSU module suffix identity stamped on your board. I believe there are a few Z960, Z960A and Z907, there may be more. Also what size TV set are we talking here? 18" or 26". Over the lifetime of the Z718  chassis there were multiple versions of the various PCB's released. I believe some were compatible some where not when swapping in modules.

I’ll unhook the diodes tonight and check again & also get back with the model of the PSU board and also  look at testing TH1 if nothing comes of the diodes.

I know this is a very silly question, but have you tried disconnecting 5Z2 and seeing if the fuse blows then? I doubt it will, but it's worth checking - and whilst you're making cold checks, check 7R5 as it provides a discharge path for 7C1 and 7C2.

I know this is a very silly question, but have you tried disconnecting 5Z2 and seeing if the fuse blows then?

Hi Cathovisor, I disconnected all the loads of the PSU so assuming that would includes 5z2, I checked 7R5 last night too.

Put your lives on hold guys, my ancient soldering iron has bit the dust so won’t be working on the set tonight unless I can find my spare.  Have ordered a new one from Amazon so hopefully be spamming you lovely people tomorrow.

Hi Cathovisor, I disconnected all the loads of the PSU so assuming that would includes 5z2, I checked 7R5 last night too.

And the results were...?

the fuse still blew, ZR5 is reading 142k in circuit

the fuse still blew, ZR5 is reading 142k in circuit

Thanks for that - so, does 7FS1 still open with 7FS2 removed? That'll at least limit it to the degaussing circuit and the mains filter cap.