Trying to trace PAL Modified Zenith Colour TV sets demonstrated and sold by Harrods London in Summer 1967. The first working Colour TV I saw was a demonstration at Harrods Store London in the Summer of 1967. As a schoolboy I could not get into the TV and Radio Exhibition at Earls Court and an engineer going in told me to come to Harrods.

I remember it had a Zenith Space Commander remote control and was in a wooden cabinet. I think the model was the Emperor. They had two rows of chairs lined up in a slightly darkened room and this moment started my life long romance with TV's. I am trying to get background info and would love to track one down.

I believe it was a 25" and it was definitely not a roundy.

I presume it would have had the line field rate changed along with the transformer. In those days the synch may have come from the AC frequency. Subsequently, I had some early Sony sets which were PAL Simple having a second NTSC decoder fitted and using the tint control and I presume this was how the Zenith would have been modded as Telefunken was under massive pressure to get sets working back then and I think the royalties and the availability of PAL decoders would have made supply very difficult. I do not remember the price exactly but it was about the same as a normal new car back then. Way beyond the ordinary person's pocket. They must have sold some. So if anyone can provide any information, I would be so very grateful. As I said it started my Romance with Colour TV's which has lasted these 53 years.

Any help would be much appreciated.

I don’t remember Zenith in the UK, learn something new everyday. The sync wouldn’t have been from the AC mains frequency, when they started 625 transmissions they went async not locked to the mains frequency, sorted out sets with poor smoothing.

RCA were producing 25 inch rectangular Colour CRT’s in 1966 so it would have been that type in 1967.

I can’t find any info online but would really like to see a circuit and photos for the one in Harrods.

Hi and warm welcome to the forum,

Thanks for posting this very Interesting thread, I really hope it garners a lot of interest ? I was totally unaware that Harrods had this Zenith TV on demonstration, so again thanks for providing a tantalising insight.

I've had a long itch that needs scratching, in as much as I would dearly like to get my hands on a USA colour TV or one of the many other experimental sets that seem to have been around prior to the launch of colour in the UK. Now as far as I was aware, until your fascinating revelation, the only experimental USA TV that had a Simple-PAL decoder in the UK, was the 1965 experimental RCA (see below). That had a switchable NTSC/Simple-PAL decoder. I'm now also very intrigued, what happened to this Zenith, is it still out there waiting to be discovered?

Just as an aside, here are a few non-American experimental/prototype colour TV's in the UK prior to the launch, some even experimenting with 405-ntsc colour in the mid to late 50's such as these two below, PYE & EKCO.

In case you've not seen the Telefunken PAL prototype Walter Bruch developed have a look at this, it's a work of art in my opinion.

Good luck with your search and I'll be watching with great interest.

p.s.
All the experimental TV's except the PYE are owned by member @mikey405 the PYE is owned by @till

Thanks, my fingers are crossed.

@nuvistor yes. I agree that a photo or anything that would help track it down would be great. The event made such a deep impact on me that I remember details to this day. Prospect for Plastics, Paint and the film about an old car were showing. It was a dark wood cabinet like American Oak or Walnut and more like a piece of furniture as US sets were compared to the early UK sets which were veneered boxes often the doors but no furniture aspirations excepting Dynatron or early RCA Bairds. So hoping someone out there will have a memory or paperwork. Radio and TV was in house at Harrods then so they must have paperwork in their records. I never saw Zenith TV in Europe or UK aside from this. Only accept ion was at a trade show in Barcelona in the 1980’s or 90’s which I think was after the LG buy out.

Although an RCA CTV not Zenith this post on UKVRRR may interest you Rich.

@nuvistor Interesting. I suspect many US manufacturers were keen to get into new market in UK. Certainly a lot of US broadcast equipment had been bought by BBC and the big ITV comapnies for modification and testing since the point where RCA's standard replaced CBS on NTSC.

Just found the skinny on the COronation COlour broadcast online. Seems to have been a PYE initiative in same direction as CBS sequential using Chromatron Tube who were funded by Paramount. Died when NTSC went to NBC/RCA solution. Amazing, we in Britain could Broadcast or perhaps Narrowcast the Coronation in Colour in 1953 and we wasted 14 years for our European Partners to catch up (except the French who needed a further development to cope with the Master Long Range Transmitter model they utilized). Such a waste.

Just seen the Chromatron was adopted by Sony and they ended up with the Trinitron which ruled the roost for many many years.

Thorn had a tie up with RCA in the CRT plant in Skelmersdale, it was a joint project using RCA technology. Only open a short while, the tech in use was being quickly overtaken by new CRT designs and neither RCA or Thorn wanted to invest in retooling.

I am sure I have posted this before but it’s an excellent insight into the problems in the industry.

Not quite ruling the roost, the Trinitron was a devolpment of the Chromatron but used wires not a mask and wasn’t it a single gun assy? Many CRT’s continued to use a mask with slots instead of round holes to increase brightness and 3 inline guns to improve convergence.

The Trinitron suffered from the support wires across the screen being visible, I had a 15 inch Sony monitor and the two wires were quite noticeable.

Never the less an excellent CRT from Sony.

Thanks. I did know some background to this. RCA had been involved with TV companies Britain doing tests. Being the developers of NTSC they had more experience than anyone else. They also had a link up with the early Radio Rental Sets. Rather than being a useful growth market the UK proved an enfant terrible with the growing UK and European companies trying to grow up fast and a strange UK market which was in recession, faced terrible Labour and management issues across the whole country and in the UK had a different dynamic with the high percentage of rental sets allowing the historically much higher prices for consumer goods to continue. With Britain joining the EEC three years earlier, I think the writing was on the wall for RCA though it is interesting Mullard walked away

@richhi
I always thought it was RCA influence that the first Baird (Radio Rentals) CTV used high level demod in the CDA circuit. As far as I am aware this was a technique used by RCA in their USA sets.
Its a long time ago and I could have been wrong then and time distorts memory, that’s why the Hansard being a contemporary write up is so useful. 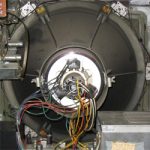 Hi All l now have the RCA ctc16 and it now working see https://www.vintage-radio.net/forum/showthread.php?t=129430&highlight=ctc15 when it was restored.

@nuvistor Yes, my understanding is the first line of sets from Radio Rentals were all RCA based and this changed on second series which I believe aligned with the move from Rotary UHF tuning to push button.

Absolutely spot on, I have a number (four in total) of Baird TV's in my collection, including two early examples showing this.

Whilst we're slightly digressing, a short while later RR dropped the use of the 700 series chassis in favour of the Thorn 2000 all transistor chassis. That was used in the M720 series (none known to have survived), though it only lasted briefly before they switched to the Thorn 3000 and others.

Some site links that may be of interest to you, the repair blogs show the 700 series, RCA collaborated chassis' in greater detail.

Whilst we're slightly digressing, a short while later RR dropped the use of the 700 series chassis in favour of the Thorn 2000 all transistor chassis. That was used in the M720 series (none known to have survived)

Now you've said that one is bound to turn up! ?

Not quite ruling the roost, the Trinitron was a devolpment of the Chromatron but used wires not a mask and wasn’t it a single gun assy? Many CRT’s continued to use a mask with slots instead of round holes to increase brightness and 3 inline guns to improve convergence.

The Trinitron suffered from the support wires across the screen being visible, I had a 15 inch Sony monitor and the two wires were quite noticeable.

Never the less an excellent CRT from Sony.

Indeed the lines bugged me too. Also worth commenting the larger screens 15”+ also had microphonic issues which is why they stayed at 13” for some time. Sadly when they started to make sets overseas the quality dropped and the result was very different. I remember comparing a Japanese 29” monitor with a European one in late 80’s. No comparison. Every bench test the Japanese monitor passed flying colors. Mind you I always liked NTSC in the edit suite as it was so much easier than fiddling with the ABBA fields. Problem with NTSC comes with transmission in the early days. The real winner there was always SECAM L. NTSC got around Phase errors with VIR and other enhancements but Chroma Noise stayed with PAL until the end. Enjoying this site. Still hoping I will hear about my Zeniths.

It is no surprise that Radio Rentals started to use Thorn chassis as they had been taken over by them in 1968.
The next Baird chassis was the Decca Bradford they even look very similar.
Keith
ReplyQuote
Posted : 27/04/2020 6:58 pm

It is no surprise that Radio Rentals started to use Thorn chassis as they had been taken over by them in 1968.
The next Baird chassis was the Decca Bradford they even look very similar.

Schoolfriend with wealthy parents had a Baird 701. We used to watch the trade test films after school and in the holidays. BBC 2 did not start until about 7.30 pm and i always hated Wimbledon. I remember the fun when BBC 1 and Thames/LWT had started test transmissions from Crystal Palace but not officially gone Colour. during that period if you were watching US programs like Star Trek or Lost in Space you never knew if you might get a colour episode. I presume they had always received colour prints but not had colour telecine. Once the equipment was upgraded on days when they had been running tests, they left it set up because all of a sudden you would be back to B/W next week. Those of course were the days when most telecine was shown live and not transferred prior to TX.
ReplyQuote
Topic starter Posted : 27/04/2020 7:22 pm

@richhi I heard some live shows were in colour before the official start of colour services.

Some editions of Late Night Lineup were shown this way, I guess so the studio staff could get used to working with the new equipment.