The Taylor Sig Gen came off the round tuit shelf and onto the bench on Boxing Day and generated a few queries. The diagram attached showing the values (missing in the original official paperwork) was created by an enthusiast whose name I should remember - for which, thanks. The 4uf silver caps shown in the attachment I assume are electrolytics. They are marked "260v DC." Should these be replaced by off-the-shelf 4.7uf electrolytics? When I opened the earthed can it revealed the four waxy caps shown in the third attachment. They are marked "1000pf." I can find no reference to those in the reading I have done and wonder if they are commonly left alone in a refurbishment. If they should be replaced, what should I use? There isn't a lot of room inside the can.Are there any particular pitfalls/points of interest I can look forward to along the way? This is no ornament and is intended to be a working instrument. Have you any advice on how should it be tested and calibrated? It is my first foray beyond standard radio sets.Thanks in advance, Paperboy. 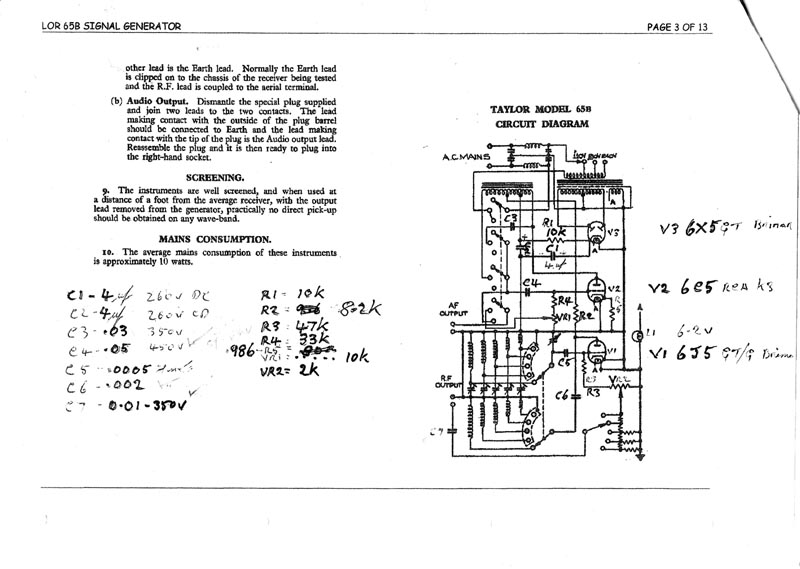 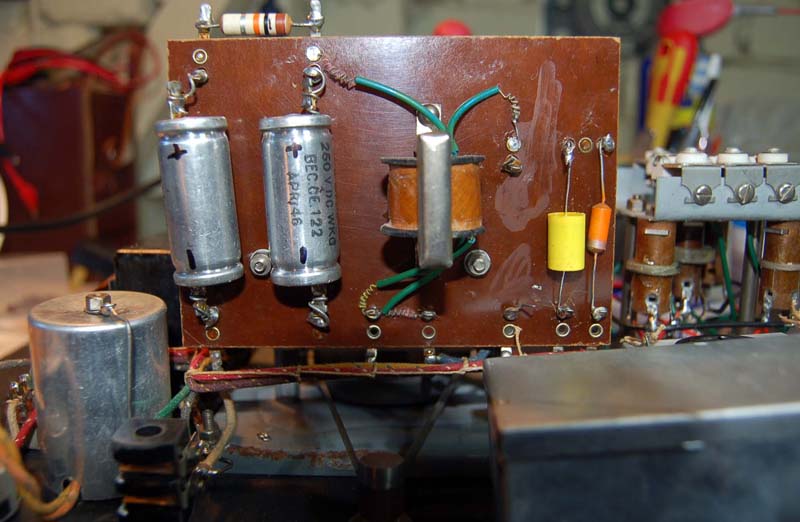 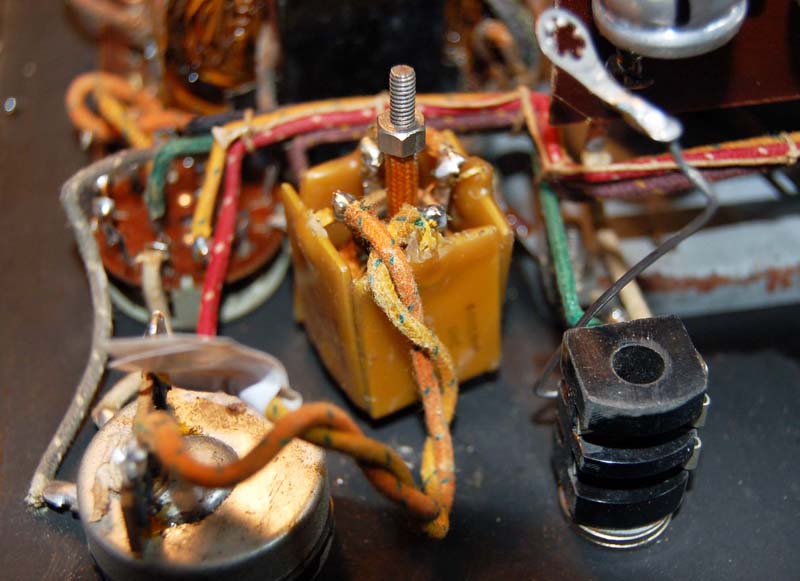 The can is an RF common mode filter on the mains. I had to replace mine as a fault had caused the coils to burn out. Flat rectangular 1000pF capacitors that size would be Mica (which are fine). The wax doesn't mean paper, in fact some of the worst paper capacitors have tar (Philips) or some sort of decomposing plastic (Hunts).

I have some schematics I updated with values. 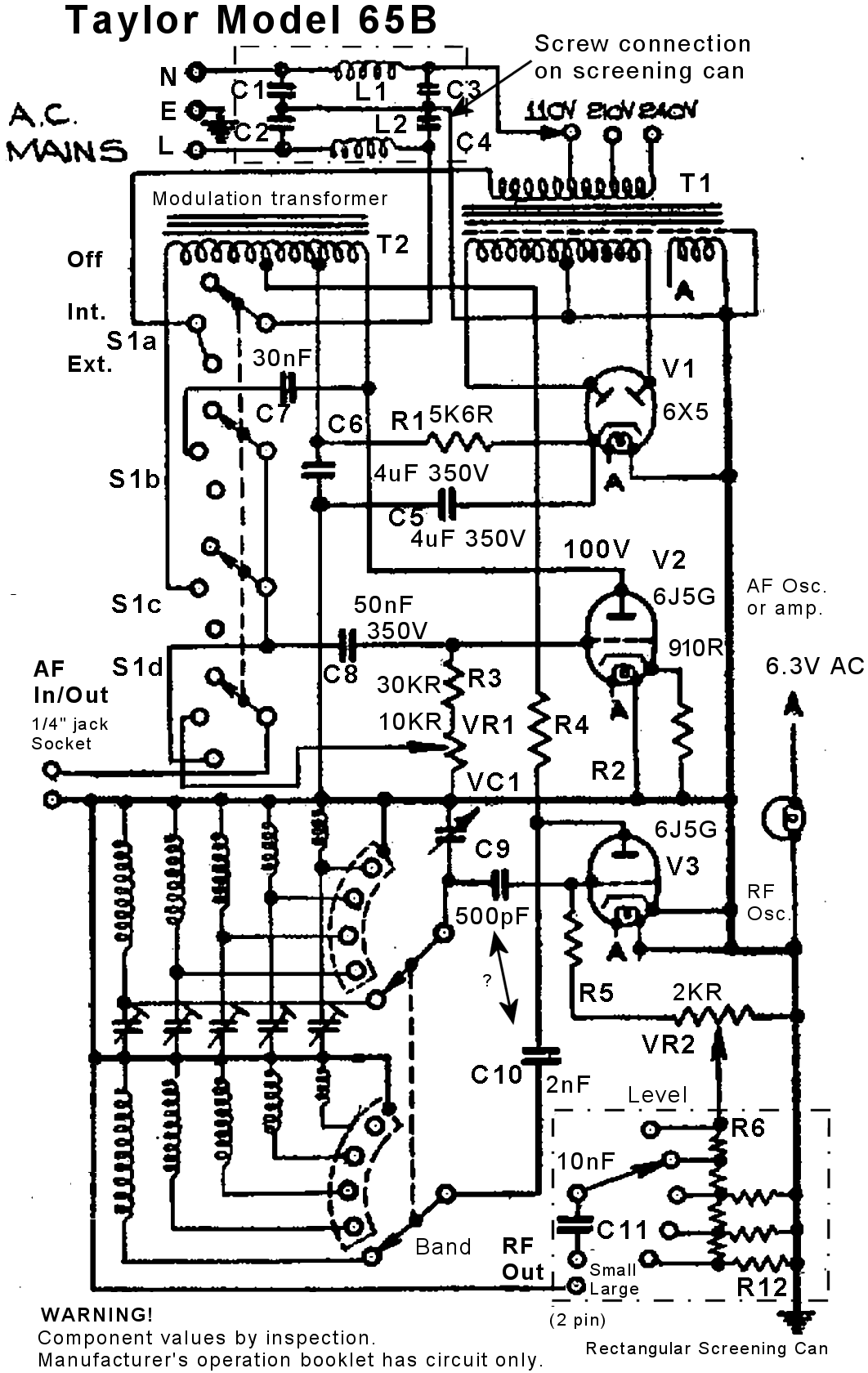 I'm not 100% sure of C9 & C10 as I didn't trace them back to see which is which, but neither needs replaced and the values are as stated.

The Electrolytic Decouplers will need replaced if they don't reform. There are some paper caps on the Audio / PSU tag strip that need replaced and the cap on the output socket (a sealed can) must be replaced with 1000V to 2000V ceramic type, the one in mine was paper, which is useless. All the other (RF / Osc) caps are Mica I think and best left alone.

Hi Paperboy, the 2 silver caps (with + and- on) are C1 and C2 on the diagram. They look in fairly good nick, have you powered the gen. up yet? If they havnt fizzed or given out smoke they may be OK! Look up reforming electrolytics. The 4 1000pf are the mains filter. The oft given advice is to remove them but again if they don't look too bad leave them. A simple radio can do without this filter but with a sig gen they stop stray RF leaking out. Don't touch the calibration yet ! It may be OK even after this time. I,ve got a 1954 Advance gen that's still accurate enough and its never been touched.

You can't tell Electrolytic condition from appearance. I had to replace both of mine. They looked like new. They wouldn't reform.

Absolutely leave the 4 x 1nF in place! Far too much RF leakage otherwise and attenuator will be meaningless!

On ANY set, capacitors should never be "removed" but replaced with appropriate types if faulty or very likely to be faulty. Mica caps are rarely faulty.
I'd not bother calibrating it and I'd only use it for basic LW / MW Radios. It's nothing like good enough for SW Bandspread sets.

Just check output with a cheap digital frequency counter that does from 100kHz to 100MHz, not one of the really cheap ones that do 1MHz or 10MHz as minimum frequency.

Most counters need a high level drive, which could be taken to a separate BNC (WELL AWAY from o/p) wired via 470pF 1kV ceramic to junction of R5 and VR2, via a 4k7 resistor and 56 Ohm divider to drive counter. Or something. You can't connect 50 Ohm counter or BNC direct to R5 / VR2 junction.

Thanks guys, that's helpful and also saves some work. I'll probably be back as the job progresses. Cheers for now.

Mods may close now, thanks.

I think they leave then open forever in case something relevant happens. Only For Sale / Swap threads get regularly closed. The Suppliers Section sometimes gets threads closed if people get silly.

How is it going?

Mine just "died". Low emission on Oscillator so I swapped it with Audio Modulator till I sort a replacement.

Ok, No problem. I've recapped and had to replace a valve in the sig gen. Waiting for the biggish resistor to arrive before making the dummy aerial. Then I suppose it'll be moment of truth when I hook it up to a set. There's a Pye P75 working fine so I might hook it up to that. I'll keep you posted.

I use a about 10 turns ordinary wire 16cm taped as a loop. If the Target set isn't loop aerial I plug a wire into aerial socket and drape it over loop.

For IF injection I connect direct to LO tuning cap. The Attenuator is good enough.

Can anyone tell me why my Taylor 65b Signal Generator has no vents on its cabinet ? With 3 valves getting hot inside you'd expect a fair amount of heat would need to be dissipated so as not to affect the frequencies generated , or am I missing something obvious here  ?

Many thanks in advance

Hi Jon, believe me that those valve types in that circuit would not get hot. Only luke warm. If anything, the mains transformer might be the warmest thing in there. The idea would be to have the generator switched on for a good while to allow it to stabilise in temperature and then the frequency would be constant.

Hi Andrew ,   Many thanks for that, it makes sense now.

Has anyone got a picture of the probe that came with this unit ? [A Harpenden auction snip at a tenner.]  I'm sure its here somewhere but I don't remember what it looks like.  Many thanks again in advance      Jon   G3VCK

What sort of probe do you think came with it ? it was shipped with croc clips on the 3ft output lead, the only option was a dummy aerial lead.