Continuing the series of "looking behind the scenes" of one of the biggest rental chains in the U.K. I recently brought you the D|E|R perspective on the Thorn 1500 and the introduction of the Thorn 8500 to their engineers.

For those of you who worked in the trade and perhaps even worked for D|E|R, this may bring back some memories. In this article you're introduced to their award scheme for engineers completing the various stages of their City and Guilds.

In July 1966 the firm were gearing up for the launch of the colour service but at this stage did not provide any payment awards for colour. As can be seen below, there are details on existing payments for various stages of the pre-colour training. However, D|E|R did offer to pay for the colour course fees should any engineer complete a course.

You'll also note the list of colleges already running colour courses and those in 1967 who intended to do so. Perhaps you might spot your college amongst them.

Anyway, without further ado, here are D|E|R's words to their engineers. 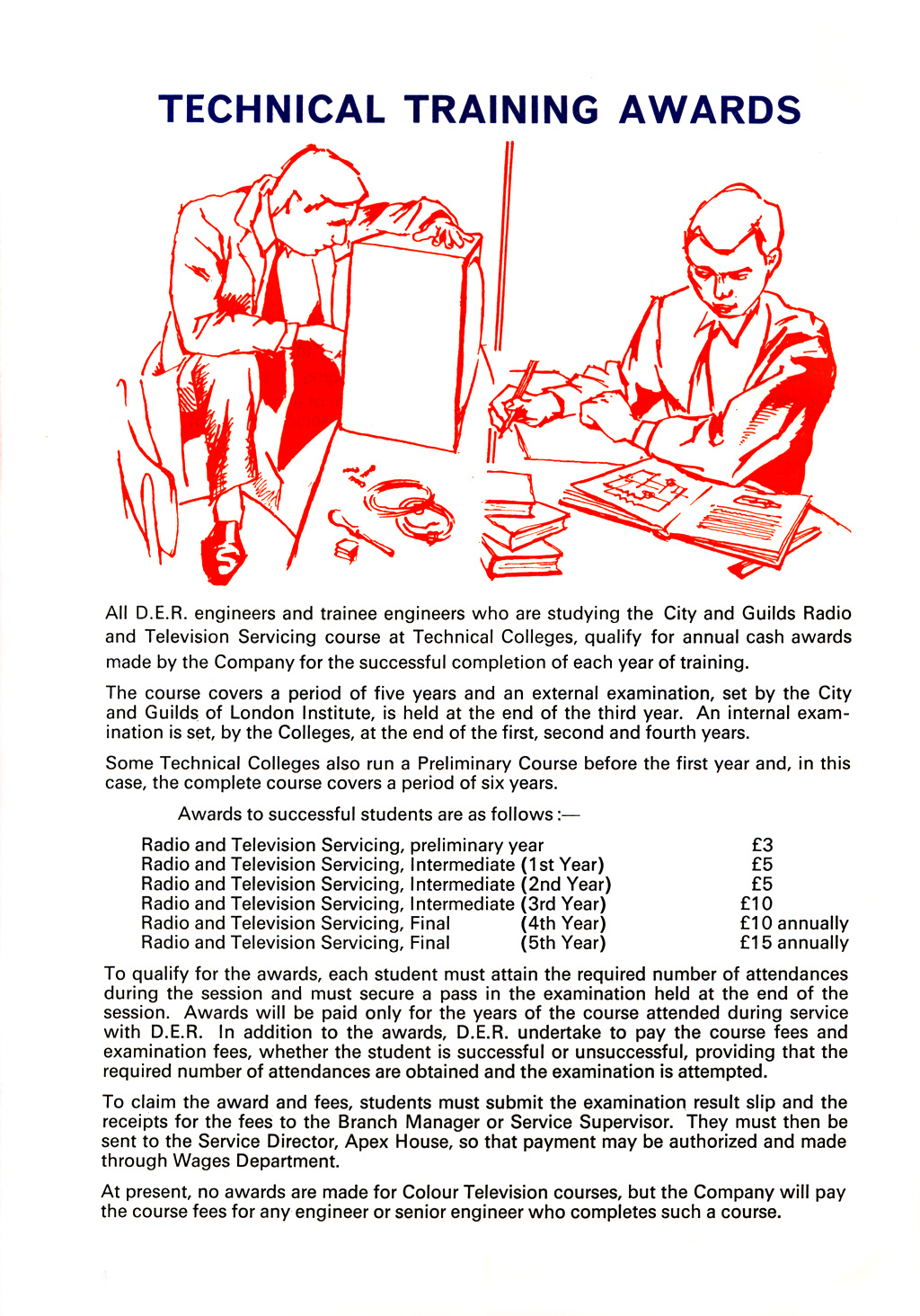 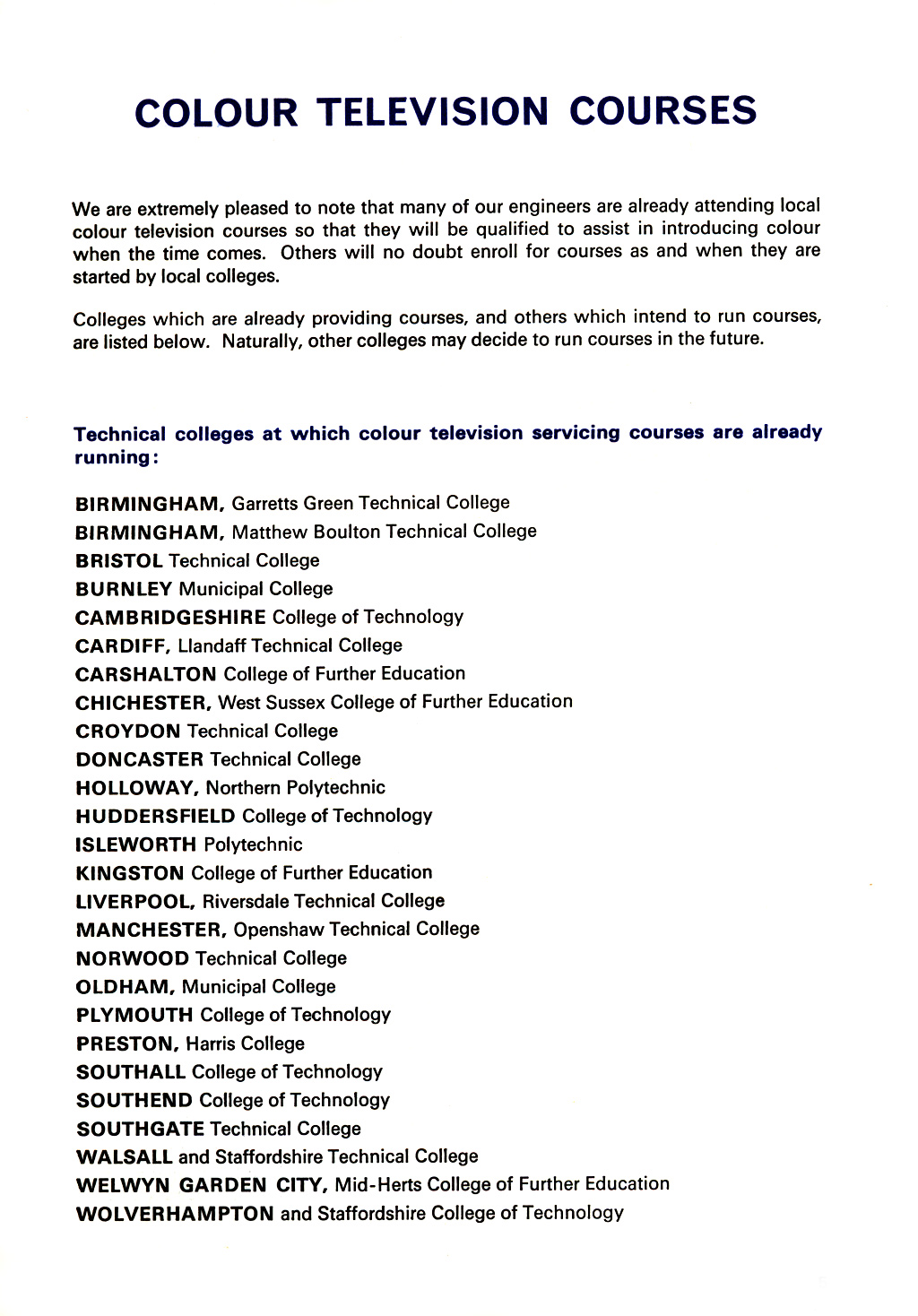 Colour Courses; Currently Due in 66/67 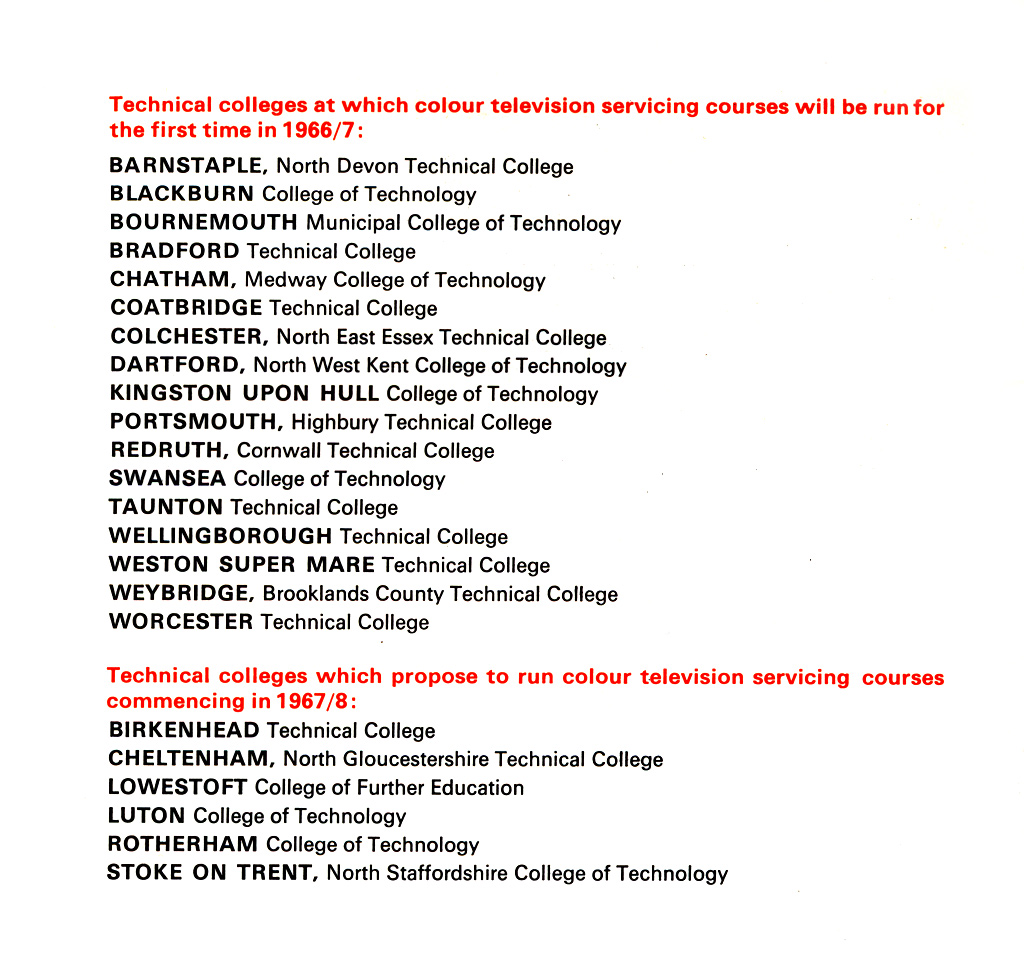 By 1967 D|E|R would pay you an additional £26 p.a. paid weekly as and addition of 10/- per week to the basic salary. The colour television awards were not limited to engineers who attended the City & Guilds courses. Any engineer who attended a recognised course could apply for the  award and wold be considered if he had reached a standard equivalent to the C&G sixth course.

Note: In an effort to provide stimulus into the forum, I have introduced "Blog-Cross Posting", see here.

You will see an auto generated link (bottom right of post) which depending on where you are (blog or forum) links you to either.

Surprised by the lack of response to this. ?

With all the ex-trade among us I thought it might at least stimulate recollections of engineer wages back in the day and whether the bonuses were felt good or bad. In light of the above D|E|R bonus system, how that compared to other outfits. If anything at least a comment or two on the college list.

Hey-ho, such is life!

None of these establishments would ever put anyone through college, you could either repair sets quickly and reliably or you were out of a job! sink or swim as they say.

I once started night classes off of my own back, it was going to take 3 years just to get the B&W part plus another 2 for full colour and then I think a further 1 year for the VCR module. bearing in mind I was already repairing most makes of colour sets anyway, including the dreaded ICC series and some very complex Sharps and Sony sets in with the mix, I was also repairing VCRs satellite receivers and CD players as well.

It turned out a waste of time anyway as the course was ended and discontinued  by the college after my first year in any event.

Whilst I was on the course one of the techs/lecturers whom was responsible for setting up the practicals for the colour students had a problem with one their "jig sets" a TX100 that they put faults on for the students doing that module to fault find on. The fault was tripping and he had replaced almost all of the stock fault parts by now including the lopt and still hadn't fixed it. He asked me what I thought as I was already in the trade for a good number of years, we went through what he had replaced to date, the upshot was I said I suspected the chopper TX as it had the later black potted type and I had had a few failures to date here (this fault had only just started to show up) with different failure modes and symptoms depending on how the TX was failing as different windings could go O/C and sometime intermittent.

Anyway he didn't believe me!

The first time this fault had shown up for me it had taken some time to find, various meters and a lamp load as well as a scope were all hooked up to find this fault and even then the chopper TX was only really changed more in hope than anything else! anyway sure enough this did fix it, I then had several more cases of this fault since then.

Anyway the next week I was in I took a known good working TX with me, I asked if he had fixed it yet ? the answer was no! so I gave him the TX to try, you see they could/would not temporarily rob another working set of which they had maybe 10 of to try.

Suffice to say the following week when I was in he made a beeline for me and said simply well I'll be damned.... before thanking me and asking if they owed anything for the TX, to which I said they didn't as it was taken from a working but gash set (tube flat).

Quite a few of my bosses did have C&G and at least one did at one time work for Thorn, however none of these people could repair hardly any of the stuff I was doing for them day in and day out!!

I was working for a small Radio and television shop in Wembley park in 1965 and did evening classes in television servicing at Southall tech. My wages were £3 and 15 shillings for a 5 and a half day week. I loved every minute of it. I eventually got day release and started the C and G course at Willesden college. That was a five year course in radio and television servicing with a test after 3 years and 5 years plus a year tagged on the end to pass the colour endorsement, During this time I changed jobs and did a year and a half at GEC in Wembley in the service department mainly servicing returned colour televisions. Each set had a thorough soak test including getting some mighty thumps on the top by the head of the service department, any signs of picture disturbance and it failed the test. We had 40 minutes to find the fault on each set which was a bit daunting at first but soon learnt the different chassis traits. In 1968 I started working at Multibroadcast which had a very similar set up to those DER inducements. Some lovely 2000 sets about then but majority of folks had black and white sets, 800, 850 and 950's . Started of with a Ford Anglia van with the passenger seat removed as we weren't supposed to carry passengers. Wasn't long before I got a brand new Morris 1300 car with removable side window panels that we could use ourselves. Clocked up many a mile in that car. I started there in the Notting Hill Gate branch and Notting Hill at that time was a very run down area indeed. I still enjoyed every minute of the job. Many a tale to tell of them days! I think I've got a copy of the City and Guilds final exam paper somewhere.

Couple of fantastic insights, thank you both. ?

Many a tale to tell of them days!

You may find this section of the blog interesting and if you ever fancy sharing one of your own tales, there's a link on the page to do so.

Oh drool!!!! I've been looking for C&G coursework or papers for over 10 years. If you ever find it and fancy scanning it, I would dearly love to archive it on the blog. I contacted C&G a few years ago asking if they could help, that I was documenting the CTV history and did they have anything in their archives related to the servicing courses. The response was, give us £50 to look though we might not be anything and your cash is not refundable.

The closest I got was finding this on e-bay its in the data library now if your interested.  From 1970 City & Guilds "837" Radio, Television and Electronics servicing book. The book sets out in detail the syllabus, demonstration work, treatments, lab work and other such requirements culminating in examination, so more for the college than the student.

Whilst the C&G TV & Video courses were no longer taught, I applied to sit the exams as they were still available (did the same with my ham radio ticket), and achieved a couple of merits.