Beau Decca radiogram found 1 at last
Picked up one of these the weekend fortunately its complete
But has some worm on both sides and some veneer damage also 1 speaker has been replaced with a celestion one.
I have the 4 sheet basic service info dated December 1948 from UKVRRR sites DVD has anyone a copy of the manufactures service data (pdf) etc they could email me is so please send me PM

Not authorised for pictures here but also member of UKVRRR.
So have asked same their and uploaded some pictures

Not authorised for pictures here ...

I thought all members could post pictures here so long as they obeyed the rules, particularly the maximum file size limit.

Even that is not set in stone as pictures stored elsewhere can always be inserted by enclosing the URL in IMG tags, generated automatically by clicking the 'Img' editing button above - just copy the URL to the clipboard, click the button which leaves the cursor between the tags, then paste the URL like this:

Note, though, that Chris prefers images to be embedded in the post to avoid the problem when someone re-organises their on line storage, whether by accident or design, and the image disappears!

You do not have the required permissions to view the files attached to this post.

You do not have the required permissions to view the files attached to this post.

That doesn't sound like a forum issue. Even non-members can see the pictures in the main sections. I just logged out and could still see pictures in all the non-private sections.

Make sure your browser settings are correct and that all appropriate updates are in place.

If you are having trouble finding out what is causing the blocking, a fairly quick and easy workaround would be to install a different browser and see what happens.

If you are still using IE, for example, Firefox and Chrome are probably the two best known alternatives.

If you are asked during install if you want to import settings from your current browser I think it would be very obvious that the answer is NO!

If you still have problems, take a close look at the settings of any security suite you are using.

It took me a while to find Vince's post on UKVRR, here it is 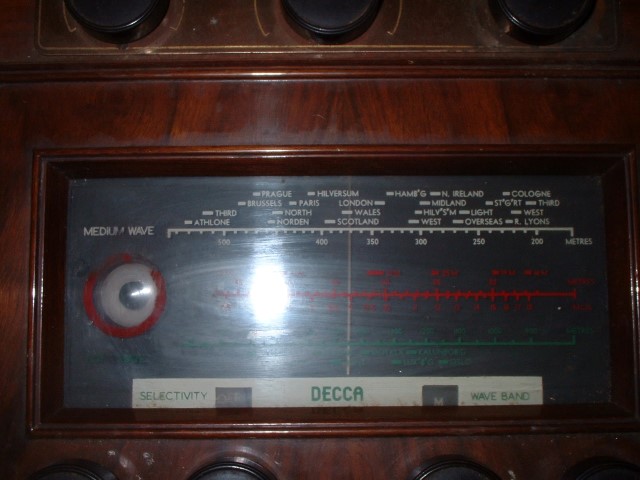 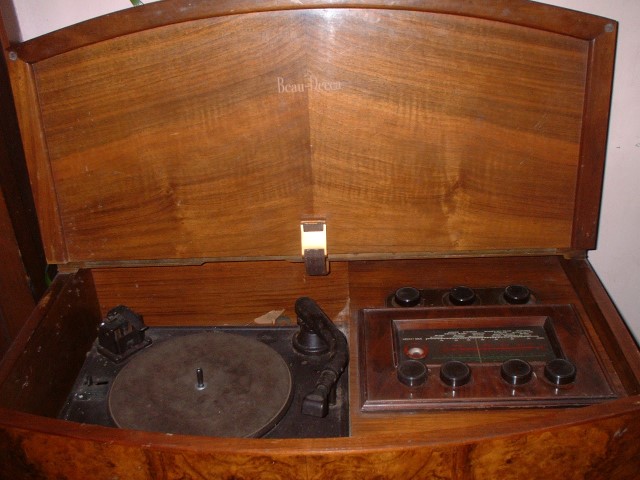 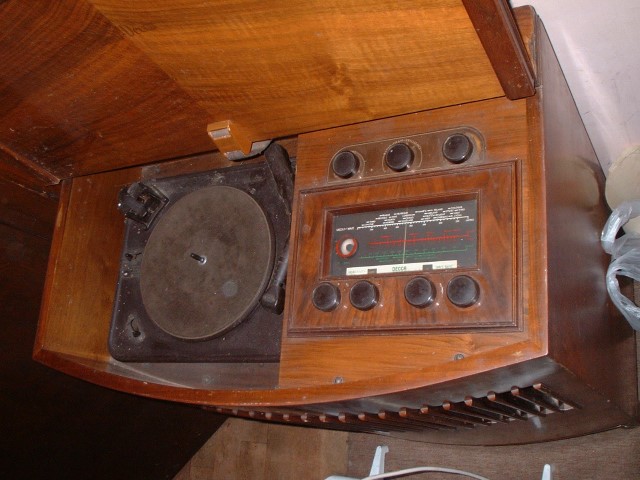 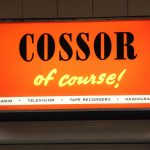 did you get chance to scan this Rob ??
cheers Vince 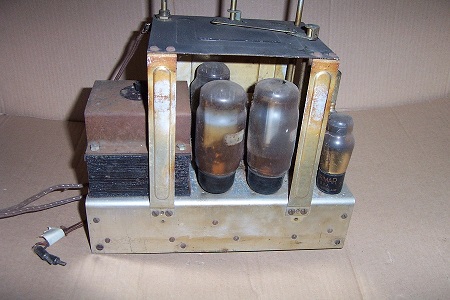 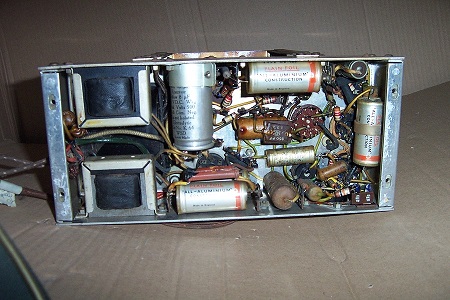 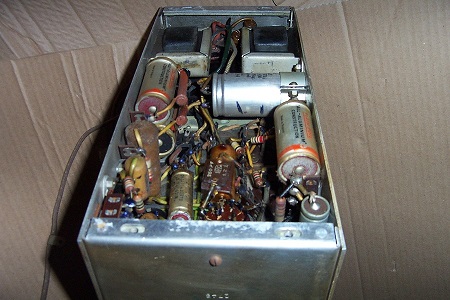 re wood wormed the cabinet ...

You mean you put a fresh lot in?

How's this one going?

I'd get some early power onto it and see what happens - obviously taking care to do all the usual monitoring etc.

Yes, it can be difficult to find time when you work full time. Having said that, I’ve packed up work and I still seem to have difficulty finding time to do all the things that I need to do, so how I ever had time to go to work I’ll never know. I see you’re getting even more stuff from Andy. I saw the advert when Andy first posted it on the other forum and thought about going straight down there and filling up the estate car as he’s in the same county as me. But, while I was pondering whether or not to contact him, I noticed that loads of other folk had started to bag most of the worthwhile stuff, so there wasn’t anything left worth having – well, for me anyway. This was actually a very good thing as I have enough ‘toys’ to keep me going and I don’t want to be in the situation that I was in 16 years ago when I had to get rid of a load of stuff when I moved house, and having too much stuff stops you working on the important things.

As for the Decca radiogram, it’s well known (on the other forum) that I’m very much against all this replacement of components without knowing whether they actually need replacing, or before first applying power to see whether the main components are serviceable. If that were my gram I would be visually checking for any obvious faults, making one or two static resistance checks and then giving it power, possibly via a Variac (I seem to remember you buying a Variac not so long ago, so a good use for it) and monitoring the HT line at the first smoother with a DC voltmeter. On the other hand, I might clip a DC monitoring meter on the HT and give it full mains. Just as the rectifier starts to warm, I would be watching the HT voltage start to rise. I would kill the power before the HT reached 100 volts, probably at about 50-70 volts. I would watch how the HT died away. I would repeat this several times, letting the HT rise a bit higher each time. I would feel for any slight sign of warming of the smoothing cans, hopefully they would remain cold, I would also sniff for any unusual smells. I would continue with this until full HT was reached and very quickly check for sound from the radio tuner or gram input to the amplifier. I wouldn’t run the unit for more than a minute or so, just long enough to make these checks. Having ascertained that the main iron components were functional and the unit was basically working, I would then look to replacing critical parts such as the several capacitors in the power amp. You’ll find that there are quite a few old and possibly electrically leaky capacitors throughout the radio tuner, but any slight leakage that they may have may not make any difference to the operation of the set.

Doing the job this way avoids making mistakes when just replacing a whole load of capacitors in one go, also, you learn a lot about fault finding. You also avoid the situation where it turns out that a major component/s is/are u/s and could be so expensive to repair/replace that the unit would be beyond repair, yet you’ve already spent much time and money replacing other parts that may or may not have needed replacing in the first place. If there’s old rubber wiring, just separate it and make sure it can’t short out if it’s a bit crumbly and it’ll be fine, you can replace it later once you’ve got the set working.

Anyway, have a good holiday and good luck with the gram – I don’t think you’ll need a circuit diagram for this one, although I suppose it would be nice to have it for reference and for members to discuss any possible circuit faults with you.

all the best Vince 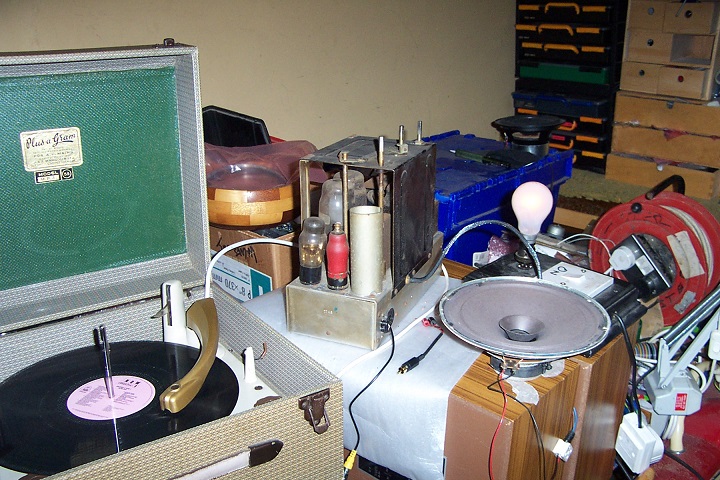 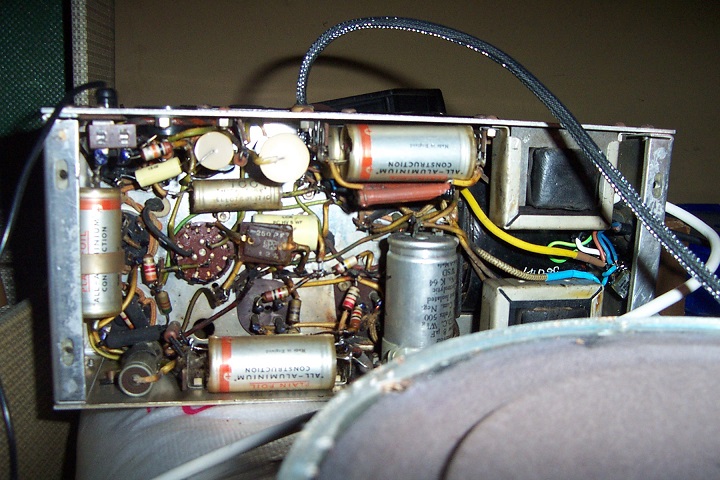 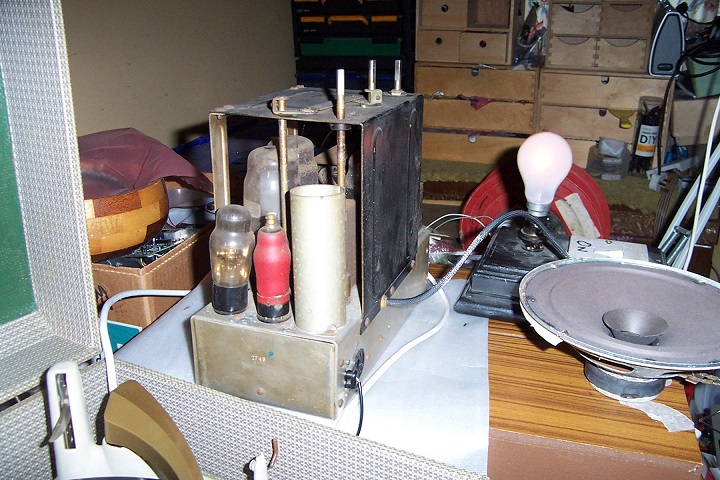