There's a chap over on our Vrat Facebook group trying to identify a radio he's just acquired. It looks very familiar to me, I've been trawling my 'Trader' sheets without luck thus far. I had a look in 'Radio Radio' and found a very similar looking Stella model but alas no model No. Stella being a Philips off-shoot makes it a possible, viable candidate but as I say, I'm sure I've seen a Philips branded model, of course bands and channels differing.

Thought I would recruit the collective power of VRAT to see if we cannot help him. Over to the Radio guru's ?

No idea on identity, but quite an elegant set- I'm assuming that being made in the US that that scale shows plenty of SW but no LW. I did think, "What's with that tiny mains transformer, could it be an autotransfomer?" but I think it's actually just a rather large radio judging by the valve next to it!

I'm assuming that being made in the US that that scale shows plenty of SW but no LW.

In Oz we called them Farm or "Bush" radios, not to be confused with the manufacturer of course. Quite common in the 1930s.

Such radios were also common in Canada in the 1930s for the same reason.

There were also models that ran from a 32v DC lighting plant. These are interesting in that they generally used normal mains valves running with 32v HT. Needed more of them of course, often using 2 or 3 stages of IF and transformer coupled push-pull audio.

A sensitive radio with good short wave performance was needed because radio reception was often from very distant MW stations that suffered from atmospheric noise ("static"), especially in the summer months. Short wave frequencies were less affected and were often tuned in when MW reception was poor.

I get it- that probably explains the otherwise strangely fat power cable. 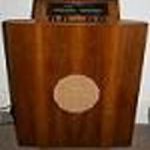 Interesting that it uses the Dutch spellings for London (Londen), also Bandung (Bandoeng) and Surabaya (Soerabaia) in Indonesia. This wouldn't be so surprising if it was made in the Netherlands, but it apparently wasn't.

Malang is also in Indonesia. Perhaps it was intended for the Indonesian market - the Netherlands having a long and fomerly imperial association with Indonesia.

That's an interesting snippet- as said, one could understand a Dutch-made radio going to Indonesia in the way that British "export" sets with multiple SW and no LW went to Kenya or India. US-made Philips is less obvious to rationalise, maybe there was a tax or tariff get-out or some other politics.

Having such a big, spacious case would also help reliability in tropical temperatures, too!

Philips was based in the USA between 1940 and 1944 while Holland was under German occupation. The set would have been made by Philips North American subsidiary Norelco.

I'd forgotten about that particular extreme manifestation of politics.... That would make this radio an interesting historical artefact as well as a technical curio.

One thing has intrigued me for some time now and maybe @ntscuser can help with it - is how there was a joint venture between Philips and Bush on what was Bush's first set for export, the EBS74. It is also known as the Philips E151A - the service manual for these has a circuit diagram that was clearly drawn in the Chiswick drawing office, but the under-chassis layout and point-to-point wiring diagram are pure Mitcham - and many of the passive components bear Philips part numbers.

@cathovisor I've no real knowledge of the product so can only speculate it was made by Bush for export to those markets where it was easier to sell a radio with a Philips badge than with a Bush one.

Philips was not too popular with the British government during the war which is why it relocated to the USA rather than Britain. There was a rift within the family too, Anton Philips never forgiving his son Frits for remaining in occupied Holland and continuing to work under the Germans.

@ntscuser Interesting, because Philips clearly gave Bush permission to use their design for an aperiodic (untuned) RF amplifier - seeing an EF50 in a radio certainly catches the eye!!