Bought this impressive looking from ebay. I've been on the lookout for a Bush VHF64 or some time.
The set works well on VHF but it's not too lively on the AM bands. I'm certain it should be a very sensitive receiver when one considers it has two stages of IF amplification on AM and three on VHF.
No doubt there will be a fair amount of capacitors to replace.
The cabinet has been stripped of it's original lacquer and there is evidence that the set was once very dark. I will return the set to the original high gloss finish. The cabinet should have gold bands at each side of the cabinet front. The second picture shows the slightly later version, the VHF94. The gold bands can be clearly seen. 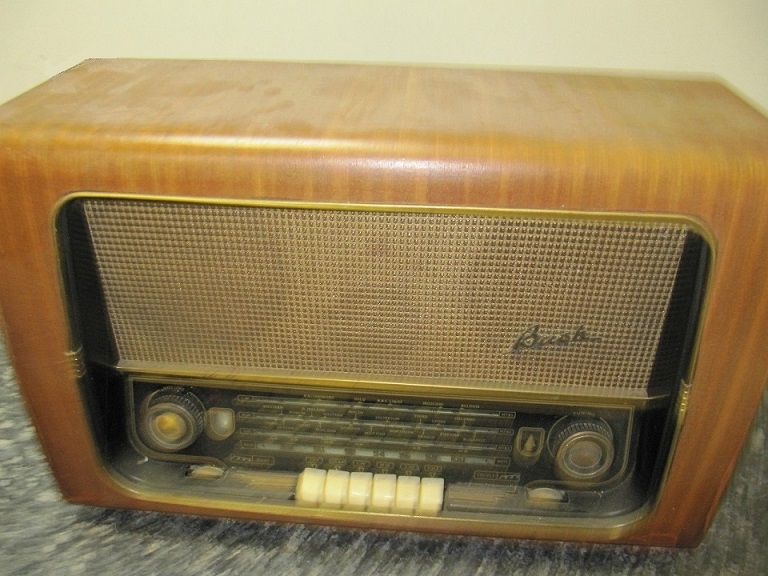 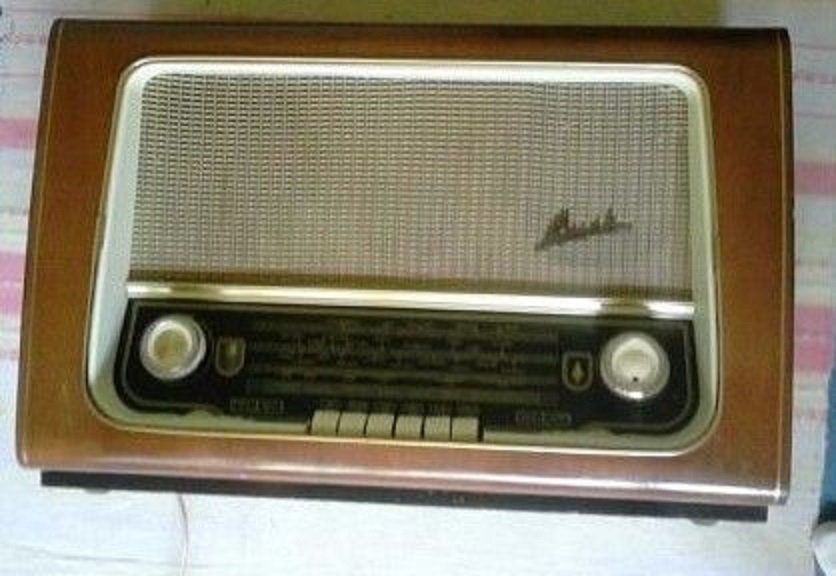 The finish on these is a dark mahogany colour, relieved by gold bands near the edges. Once they are fully restored, they are excellent performers - particularly if the little electrostatic tweeter is functioning.

I used to own a VHF64 and it was one of the best receiver's I have ever heard.
I had carefully restored it and sold it some years back on ebay as I needed the funds. It went for just over a £100.

I found it very sensitive on all bands after the usual caps had been replaced and a full re-alignment performed.
The electrostatic tweeter can be repaired as I remember there is a foam backing inside that rots and if replaced, will gently push the plates back together and it should work fine again.
Powerful bass and bags of top end... it was wonderful on VHF

I used 3.2mm wide gold tape, I believe it was Letraset "Letraline" to replace the gold inlay on the edge of the cabinet. It is very thin and looks identical to the original finish.
Once I had re-dyed the cabinet, several coats of Liberon finishing oil ensured a nice glossy finish and secured the gold tape nicely.

Wish I still had the set

The VHF64 which is the subject of this topic is truly impressive on VHF. AM performance is a little disappointing, I'd expect more performance from a set with two IF amplifier stages on AM, three stages on FM.
The Medium wave coverage extends beyond 1500Khz so the set can receiver Radio Tyneside on 1575Khz.
Checked the voltages around the EL84, sure enough positive volts on the control grid. It goes without saying the coupling capacitor is leaky. Pull the EABC80 out and the EL84 grid volts shoot up to 54!
There is evidence of some recent servicing, a number of decoupling capacitors have been replaced in the IF amplifiers. Very small RS plate type capacitors were fitted, these are only 4mm square.
Thanks for the tip about the gold bands. It would complete the cabinet restoration if these embellishments are present. Cabinet will returned to the original dark high gloss finish.

Letraline was the stuff I used on the one I restored.

The Medium wave coverage extends beyond 1500Khz so the set can receiver Radio Tyneside on 1575Khz.

And so it should!

Be that as it may but many sets don't receive the 1575Kc/s transmitters. My Eddystone 670A is one.
What was the date of the Copenhagen plan?

So the setmakers really had no material excuse for not extending MF coverage to 1605 KHz after circa 1948. There surely could be very little doubt that all of the new channels would be occupied in the not too distant future.

It does seem puzzling that a set with 2 IF amps on AM should be found wanting in performance- after all, we were comfortably into the era of quieter, grid-aligned multigrids and two subsequent stages should have been advantageous in putting it somewhat above the average. Perhaps Bush had kept stage gain relatively low to avoid the need for neutralising bridge techniques that cropped up as being necessary in some sets that squeezed a lot of gain from one IF amp. How early in the era of ferrite rod, as opposed to wire loop frame aerials , did this series of sets occur?- I wondered if it was lossy, excessively shielded by the rest of the set or suffered some other sort of performance disadvantage.

Eddystone's MW band policy in quite a few of their sets is puzzling- the 750 has a bit of an excuse in offering 480-1465kHz coverage in that the 1st IF is 1620kHz with 2nd conversion oscillator at 1535kHz but it's less easy to rationalize in other models. Perhaps in shifting coverage from a typical LF end of around 520kHz down to 480kHz, they were hoping to appeal to the professional market for 500kHz watch use but surely this can't have been the case with all. Of course, maths and physics dictates that shifting the LF end coverage down by approximately 40kHz would mean forsaking 120-140kHz or so at the HF end with typical tuning gangs- a significant chunk of the band.

The Bush VHF64 does seem to be something on an enigma with respect to its AM performance. Although unusual, its basic circuit, FC + (2 x IF) should have worked adequately well. As you say, the ECH81 probably had one of the quieter heptode mixers extant, and was the basis of many an FC + IF circuit. I wonder how the VHF64 compares with the Bush EBS64 AM-only receiver, which had a very similar circuit albeit with some refinements like delayed AGC. The EBS64 did not have an internal ferrite aerial, though. That feature on the VHF64 would, I think, have to be a prime suspect. On SW it was switched out, , but on LW and MW its remained in circuit, with the external aerial connected to the bottom end of the ferrite LW and MW coils, in turn connected to chassis by a parallel R-C network with a not-small capacitor. Maybe that works in non-obvious ways, but on its face it does not look like good way to get the best utility from the available aerial signal.

Eddystone seemed to truncate MF band coverage at 1.2 MHz or thereabouts in quite a few of its receivers. Usually the top end of the band was covered by the first “SW” range, which thus started at 1.2 MHz or thereabouts. The 670 and 670A may have followed this pattern, except that the “first” SW band was missing, and hence the upper end of the MF band as well. That was eventually remedied with the 670C.

Compared with the VHF64 the Bush VHF80 is a better performer on AM The VHF80 has an RF stage on medium and long waves and although the full potential of having one is likely to be impaired by having only a resistor for the anode load of the UF89. The valve does make an useful contribution to sensitivity. The valve functions as an IF amplifier on FM.
The anode load resistor of the AM RF amplifier has a low value of 2.2Kohms and a 33pF capacitor is connected across it. There is also a series inductor and capacitor between the anode of the RF amplifier and chassis which I assume is an IF trap.
Audio quality of the VHF80 is not as good as the VHF64 as one would expect from a receiver having one loudspeaker and housed in a plastics cabinet.
Read about the Bush VHF80 here: http://www.richardsradios.co.uk/vhf80.html

Getting back to the subject of this topic, the VHF64. The tone control circuits are very basic, no Baxandal network in this set. The treble cut control consists of a 500Kohm log law pot in series with a 0.01mfd capacitor, these components are connected between the grid of the EL84 and chassis. Top cut is excessive at the extreme end of the control setting. Perhaps the value of the capacitor could be reduced to say, 0.0047mfd?

Letraline was the stuff I used on the one I restored.

does anyone know where to purchase this ....or equivalent?

I suspect Letraline has gone the way of Letraset.

I imagine somewhere like Hobbycraft might have it, but I'm pretty sure I've seen very similar stuff sold on German eBay as it was a very common decoration on German sets of the 1950s.

Is this the product?

The stuff I had was on a reel and gold in colour.

I have had a VHF64 somewhere which is lighter finish than the usual dark walnut finish.  It hadn't been stripped as it still had  the original gold lines. I am sure I read somewhere that two finishes were available.

Perhaps most folk at the time wanted dark brown?

Is the bottom coupling of the external aerial connection on the rod aerial not to blame for the insensitivity similar to the Cossor Melody Maker 500 range of sets?