I'm looking for a GEC BC 4644 radio. Will consider pretty much anything you have to offer, working preferred but beggars can't be choosers... 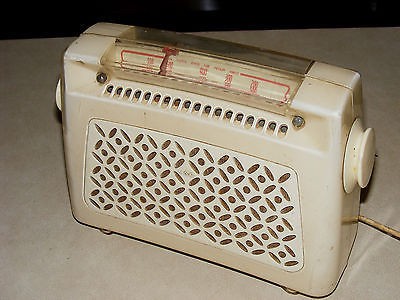 Well it took some time, but...

A few of these keep popping up on ebay, but they are generally in poor condition, or expensive. Often both.

A week or so ago a red and cream one was put on ebay that had been dropped. It was in good cosmetic condition, if you ignored the holes on the lower corners where it had splintered rather badly. It was not working electrically either. Still, it wasn't ridiculously expensive so I took a chance and bought it.

When it arrived it looked in rather worse condition than the pictures on ebay had appeared to show. Both front and back halves of the cabinet had large holes and cracks in them reaching almost to the top on both sides. However, when I tried to piece together the jigsaw of plastic in the box, I had been sent all the small parts of broken case and I thought I would be able to make something of it.

Fixing the electrical fault was easy, the drop had pushed the tuning capacitor out of position and it was shorting out to the chassis. Some realignment of that and some bending of the rest of the chassis soon had the radio working on both LW and MW. Then the dial cord snapped. Rats! I managed to repair this using some twine I had, which, whilst a little to elastic, does work. Phew.

I invested in some Araldite and yesterday set about trying to glue the case together. Cleaning off a previous repair attempt using Super Glue was hard but required as the Super Glue prevented the small bits from going together correctly. Eventually I got all the parts into position and held them together with masking tape while applying the Araldite generously. These were left overnight and today I cleaned up the excess glue from the joints. There was a fair amount of Super Glue still on the front of the case which I had to file away and then polish to a reasonable shine. A final application of a red sharpie to the white Araldite followed by some buffing has left me with a radio that while far from perfect, is usable. Given how many parts the cabinet arrived in, and the brittleness of the plastic I'm fairly pleased with myself.

Here are the 'before' pictures, taken by the seller. 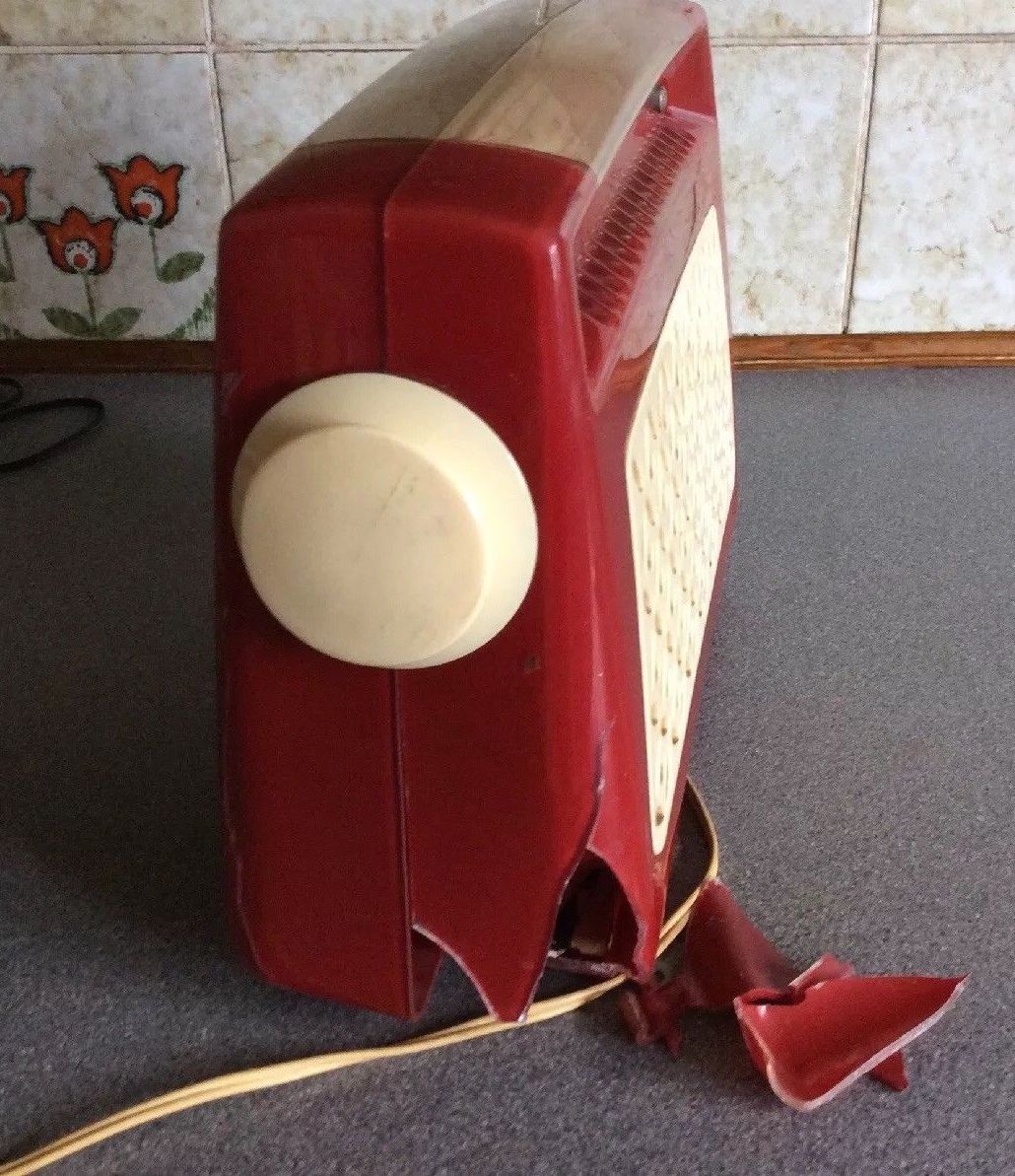 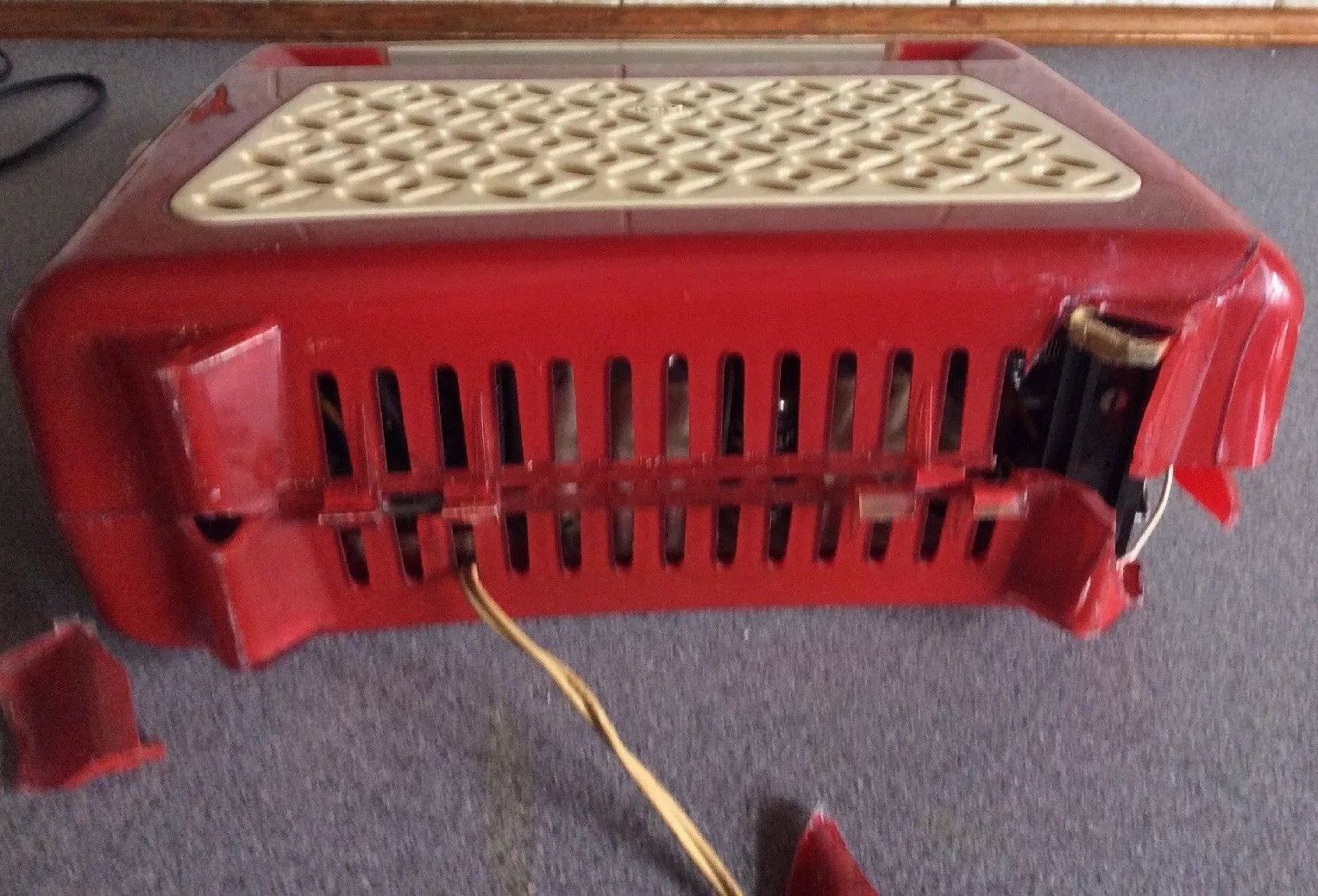 Here are the 'after' pictures, taken by me. 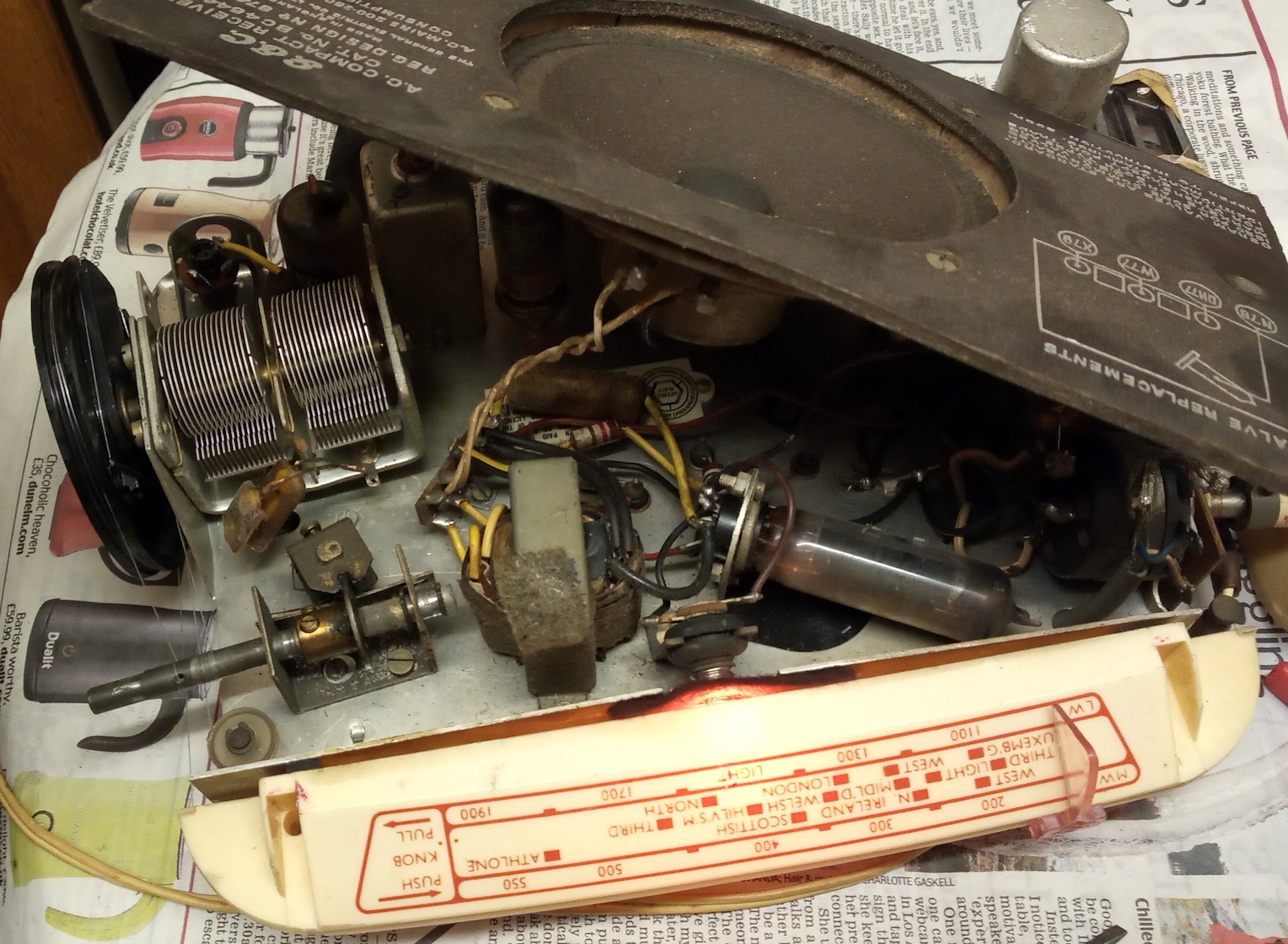 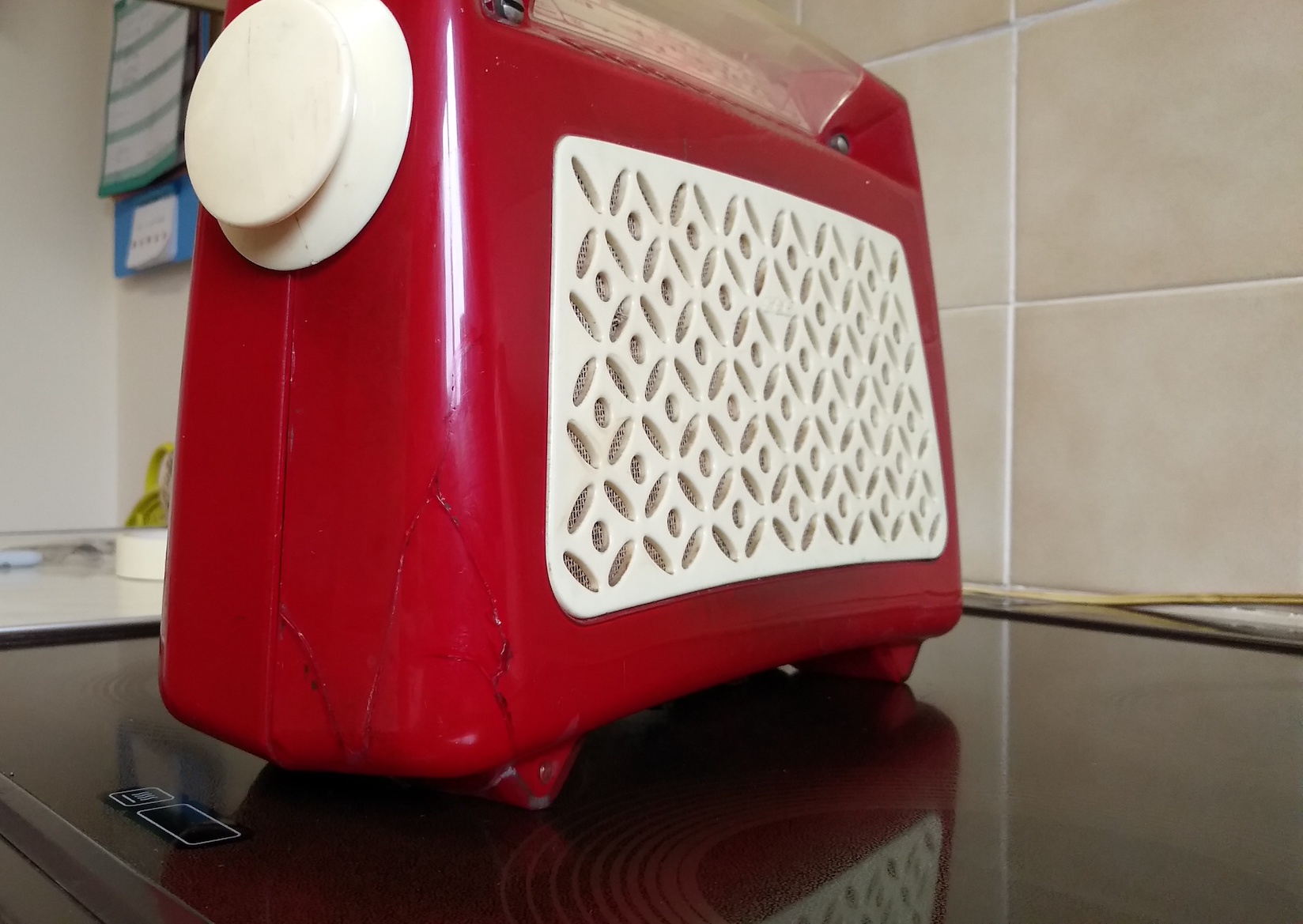 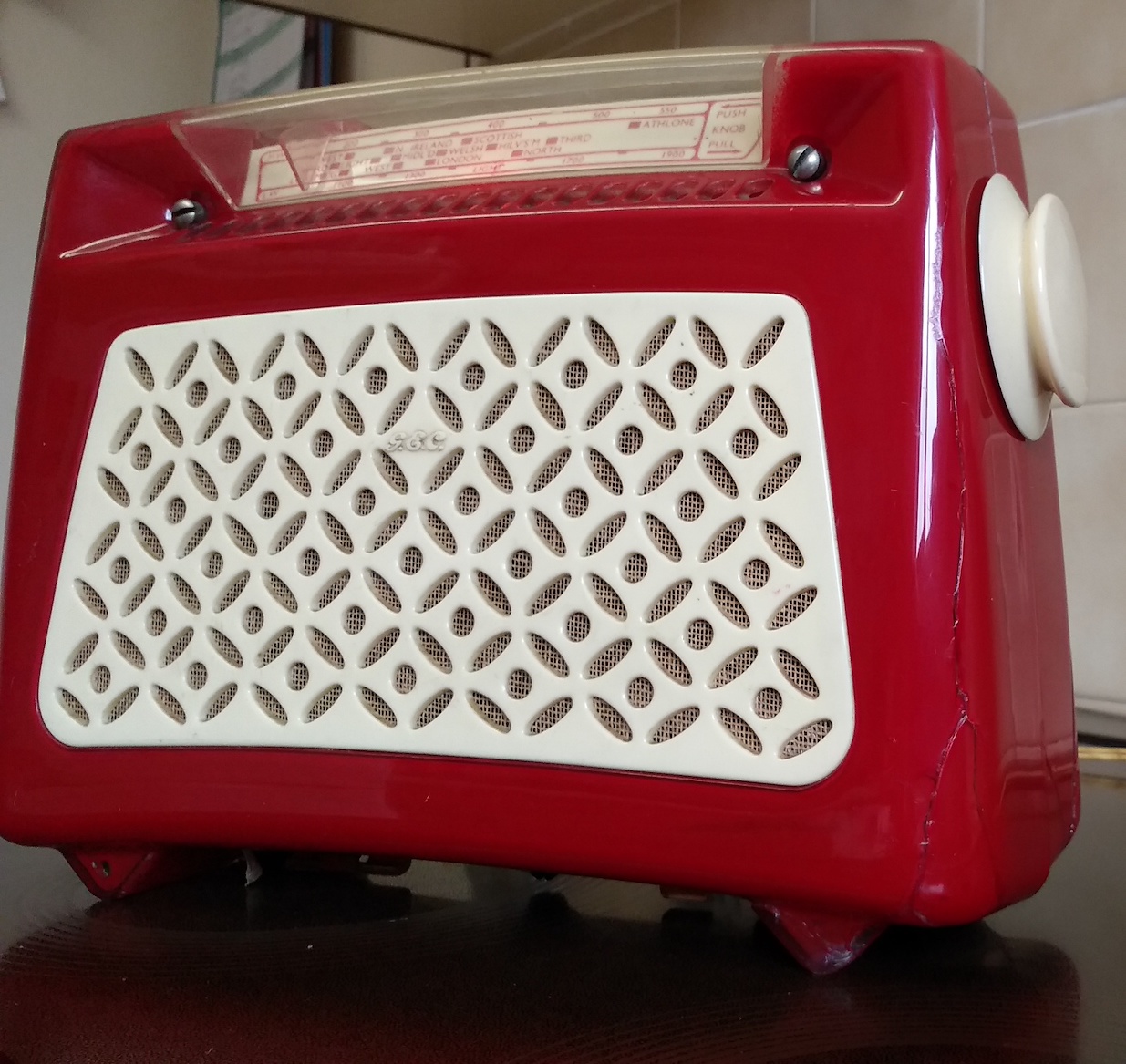 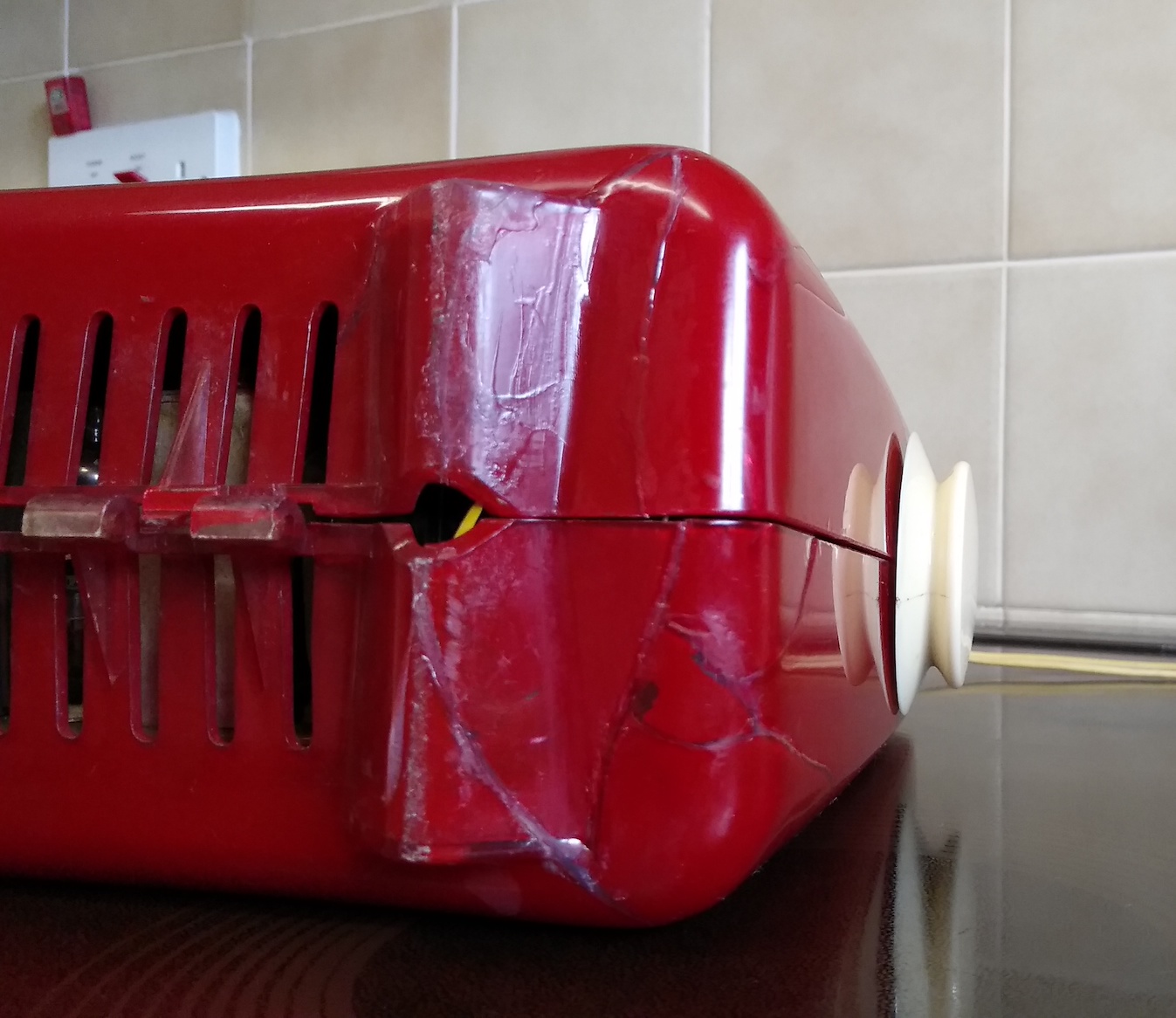 What year was this set introduced? I am thinking the middle to late 50’s, many people were wanting bright colourful items after the dark dismal days of the 1940’s early 50’s.

You have saved it from the tip, it works and looks very good.

Thanks Mike, that makes sense, many items started to be made in bright colours.

The sales catalogue for Bush for that time says that "bright, gay colours" are much in demand as a replacement for "war-time drabness". So the walnut and sycamore cabinet with white knobs of the AC34 replaces the much more conservative AC11 of 1949.

The kitchen in our council house was painted brick not plaster, colour green and brown. The council plastered the kitchens in the estate around 1954-55 and my dad was given the job of wallpapering. Mum chose a bright washable wallpaper with lots of highly coloured fruits .

I remember that washable wallpaper! It was horrendous, went brown and shiny. Trouble was it lasted really well with the occasional wipe down, unfortuneatly.

I remember that washable wallpaper! It was horrendous, went brown and shiny. Trouble was it lasted really well with the occasional wipe down, unfortuneatly.

It had one distinct problem......... When you wanted to change the wallpaper, it was rather difficult to soak this stuff, to scrape it off the walls!

Probably why it lasted so well? ?