The following text regarding operation was obtained from Oldtechnology.net to view their original article click here. The images used are however from my own machine. 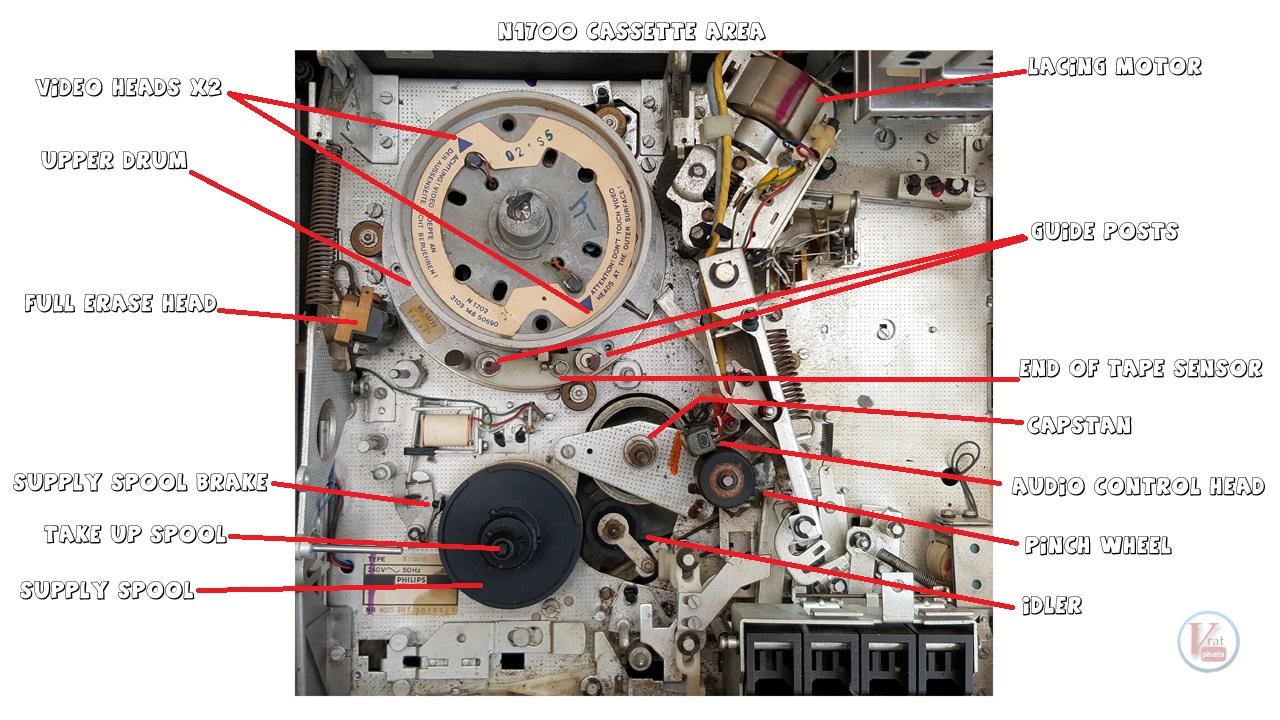 The cassette deck is concerned with the physical mechanics of moving and scanning the tape.

The first item that should be mentioned in the picture is the lacing motor. When a cassette is loaded into the VCR and the machine is switched on, it is this motor and it’s associated mechanics which drag the tape out of the cassette housing and wrap it around the drum and guide posts by rotating the entire drum assembly 200 or so degrees clockwise. The guide posts, being on the inside of the tape, pull the tape out of the cassette as they themselves are pulled round the drum.

The main circular item at the top of the picture is the drum assembly. This is divided into two sections, one stationary and the other that rotates. The stationary part (The lower drum) is the part of the assembly which sets the lower position tape as it is played. It has a special high-precision guide called the “Ruler-Edge” which, with the guide posts, ensures that the tape is positioned in exactly the correct place to be scanned by the video heads on the upper-drum. The lower drum also has the end-of-tape sensor mounted on it. This, as the name suggests, stops the tape when it has reached the end of it’s travel. It detects the end of the tape by means of a foil strip on the tape which shorts out two contacts as it passes the sensor. On top of the lower drum, is the rotating part (The upper drum). This has the video heads mounted on it 180 degrees apart. The video heads read the picture information as they scan the moving tape.

Apart from the video heads, there are three more heads in the VCR. The full erase head on the left hand side erases the entire cross section of the tape before fresh audio and video are recorded. If this head is not working, then when a fresh recording has been made,vague images of the previously recorded program will be seen underneath the new recording. The audio and control heads are mounted on the same assembly on the right hand side of the VCR. The audio head records the sound on the bottom of tape and plays it back in the same way as an audio tape recorder. The control head records and picks up pulses to accurately control the position of the tape, and these are recorded on the top of the tape.

The idler on the bottom right of the picture is used to direct power from the motor to the take-up or the supply spools during fast forward or rewind. 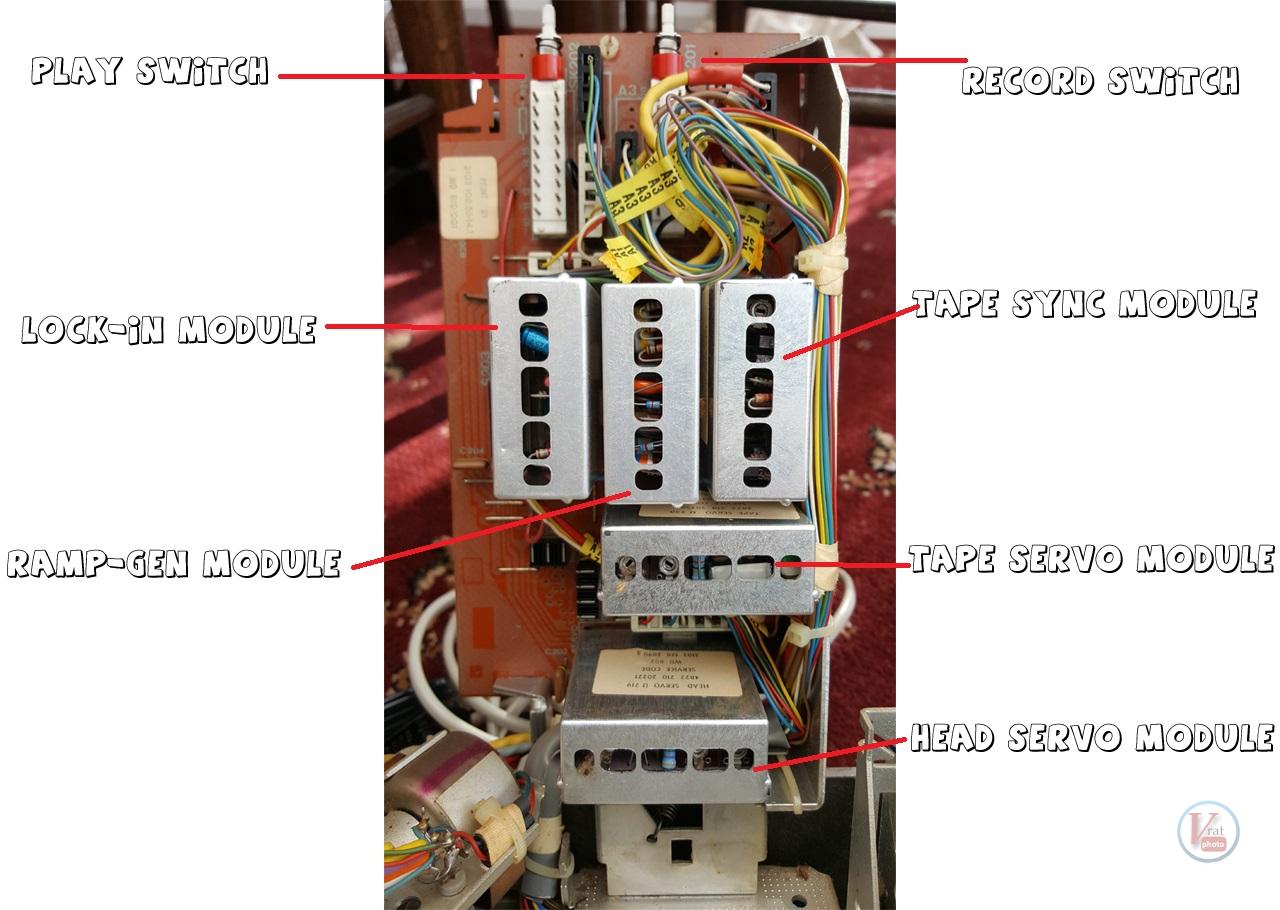 The Servo Board (Hinged Up)

The servo board accurately controls the speed and position of the drum and the tape relative to one another during record and playback.

If the picture is to be free of noise bars and tracking-errors, it is imperative that the VCR knows exactly the speed and the relative position of the tape and the heads during record and playback. This is where the servo board comes in. The VCR employs a series of sensors to control phase-locked-loops which accurately set the position and speed of the tape and the heads. The modules in the picture control various aspects of this job and are switched in and out depending on the positions of the record and play switches. (These switches are mechanically linked to the play and record buttons on the front of the VCR).

The digital lock-in circuit makes sure the upper drum is rotating at the correct speed as quickly as possible after the VCR is switched on.

The FM Board (Under the Signals Board)

The FM processor board is mounted underneath the signals board on the right hand side of the N1700 / N1702 VCR. In playback it demodulates and processes the FM video signal which is supplied by the video heads via the video head amplifier. In record mode, the video signal is fed to the FM modulator and then passed as an FM signal to the video heads, again via the video head amplifier. The FM processor board also contains a recycling drop-out-compensator (DOC). The blue delay line you can see at the bottom of the picture stores one line of video information, so in the event of a drop-out (loss of FM signal due to bad tape or clogged heads etc.), the last good line of video can be displayed instead of a white blip on the screen. 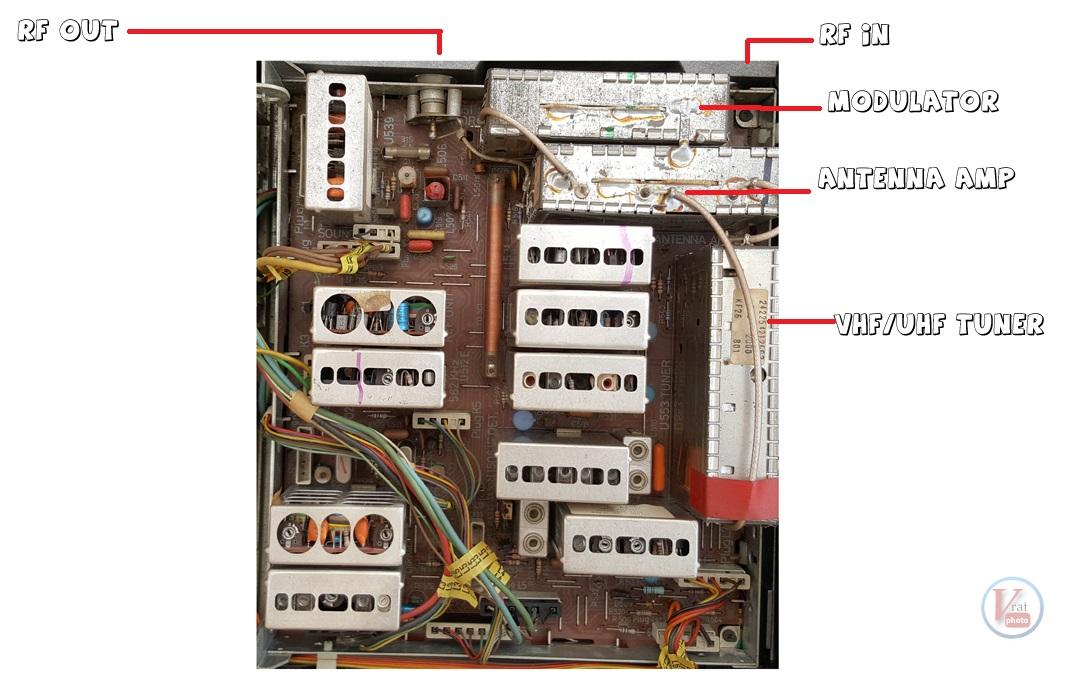 The signals board is the most complicated board in the N1700 / N1702 VCR. It performs several tasks related to signal processing.

In record mode, the signals board takes an RF signal from the antenna socket, demodulates it using circuits very similar to most television sets, and converts it into it’s component luminance (Y) signal and composite chrominance signals (C). The Y and C signals are then amplifies and processed before being passed to the video heads for recording on to the tape.

In playback mode, the signals board takes the signal from the head, recovers the seperate Luminance and Chrominance signals, demodulates them and then combines them to form a recognisable composite video signal. This signal is then modulated and sent out as an RF signal through the antenna socket to the television.

The antenna amplifier unit amplifies the RF signals coming in to the video recorder from the television aerial and then passes them to the RF output socket.