I picked up another N1500 an Ex BBC unit that had sat in the families wardrobe for 40+ years, yes you guessed it, residue of melted belts. I’ve completed the clean up of the disintegrated head drum belt which again had deposited itself all over the Eddy disc as well as between the electromagnet plates. This had resulted in the drum being totally seized up, now it runs free.

Whilst at it I removed the head drum to have a close up look of  the heads under the microscope, happy to see the heads look in very good condition and are not worn away like that awful N1700 set I had. This chassis is physically a peach, therefore I’ve decided before any rash decisions with regards to this VCR are made, I want to run this one up and see what condition the circuits are in and how it behaves. This for the most part due to it being in my opinion, in much better condition than my original N1500.

Granted I got the other N1500 playing/recording and all it needs is a new SK401 & SK402 fitted, then all should be well. However that VCR has had work and modifications in its life at the Uni, these include some additional PLxx video\audio sockets at the rear with some less than tidy work. The Drum head lacing lacing has obviously failed in its past and a new cord fitted along with a new drive motor transfer cog. The new lacing cord works but its not been elegantly strung.

Whereas this is in mint original condition but drum lacing has failed All the boards are in much better original condition as is the top chassis including the pinch roller. All that’s not well hardware wise is the clock has lost its glass and one knob, also the off button is missing.

I’ve ordered up a new set of belts from Germany for this player. I will then independently be able to run it up on the bench to see how things work out. 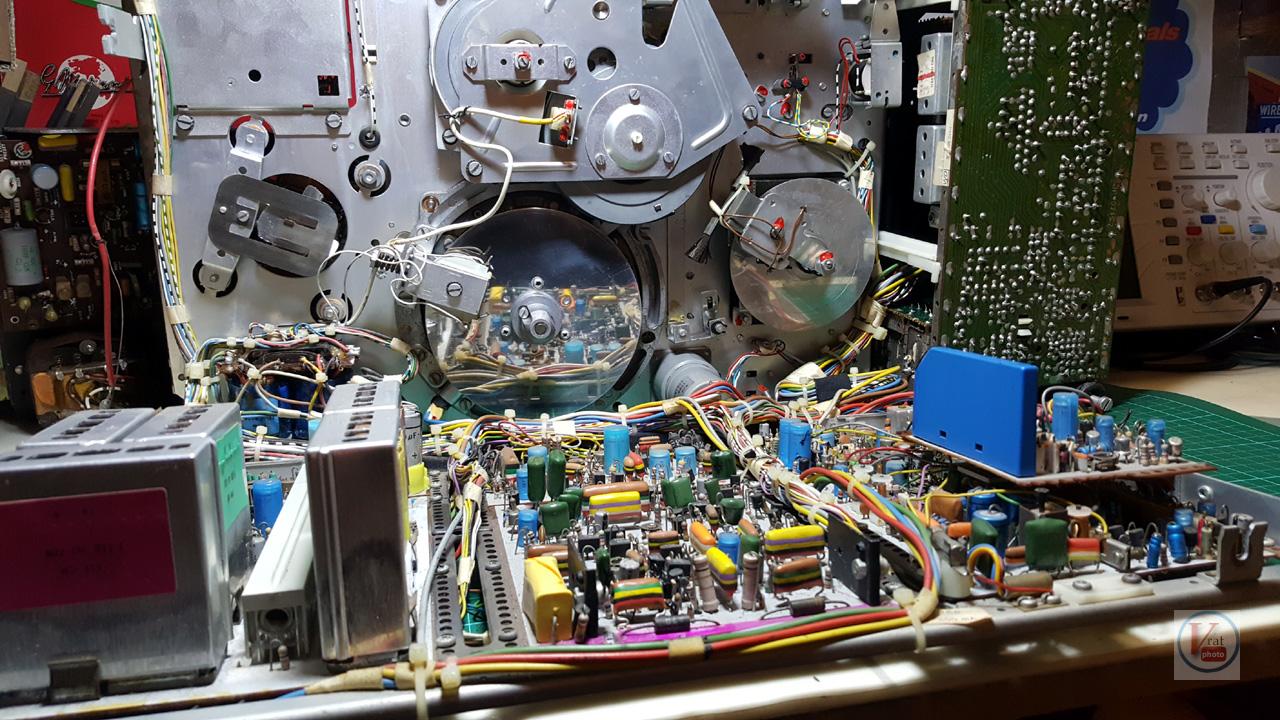 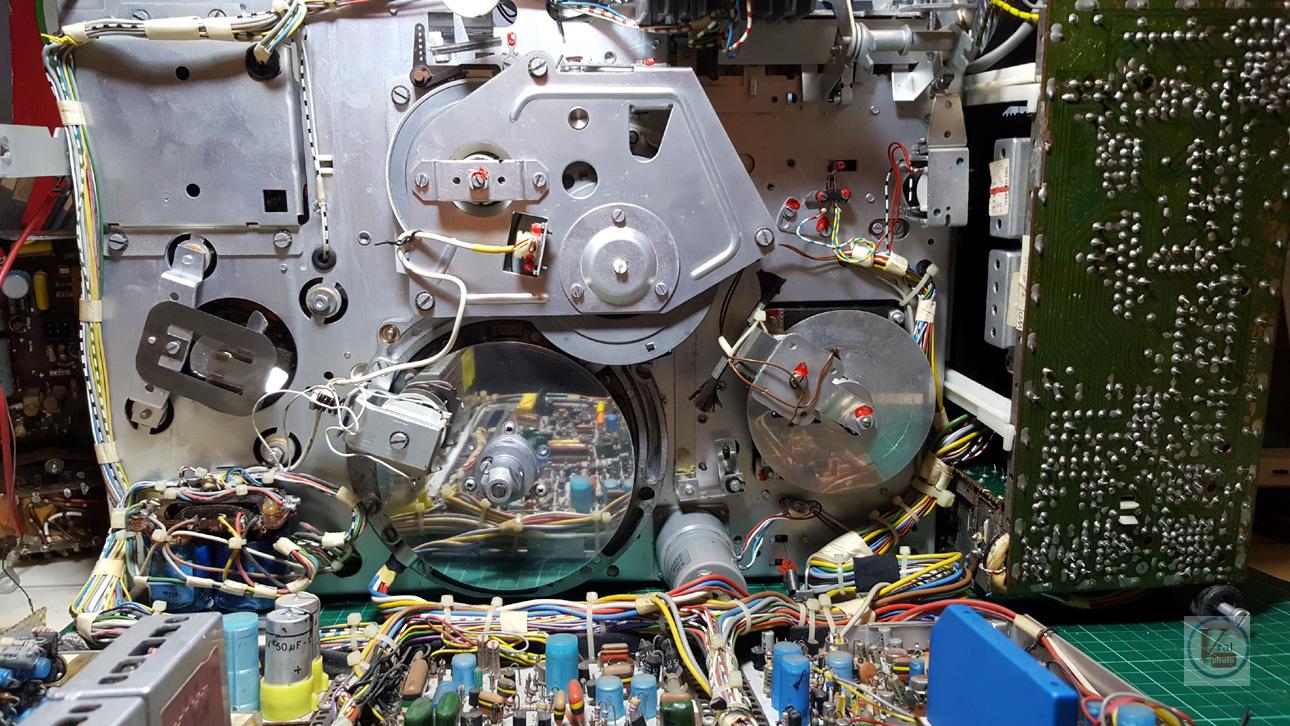 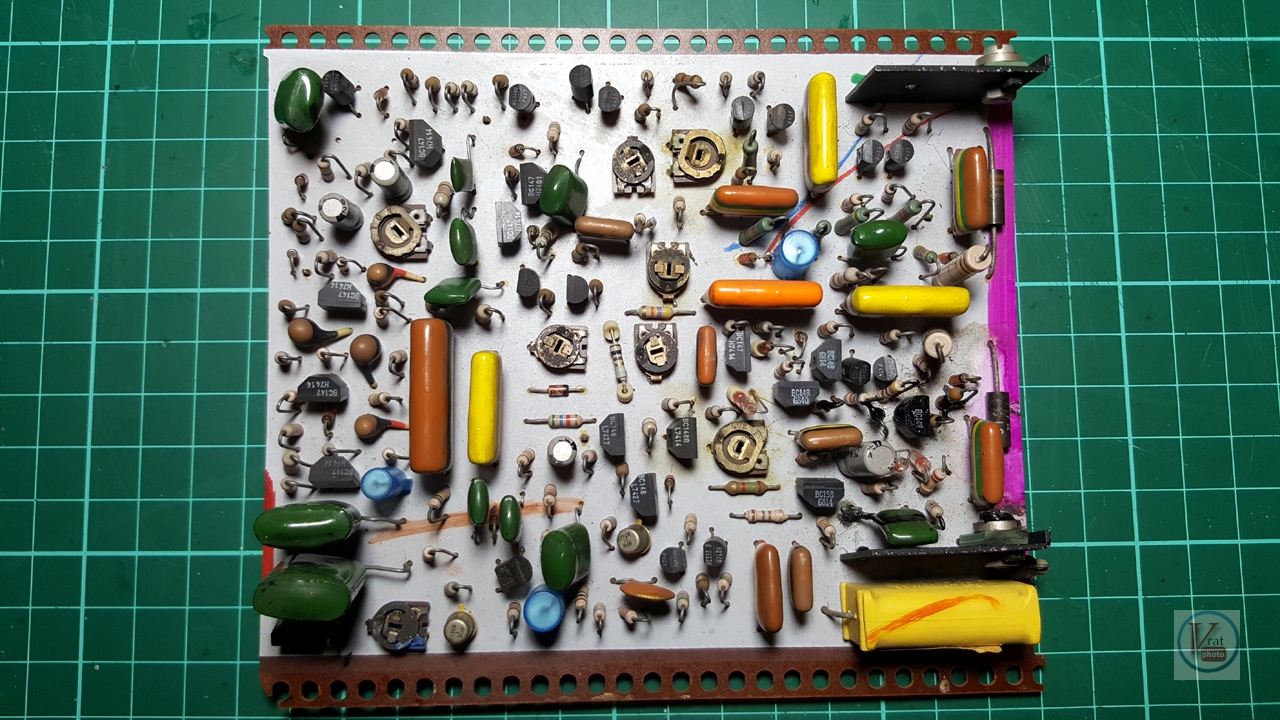 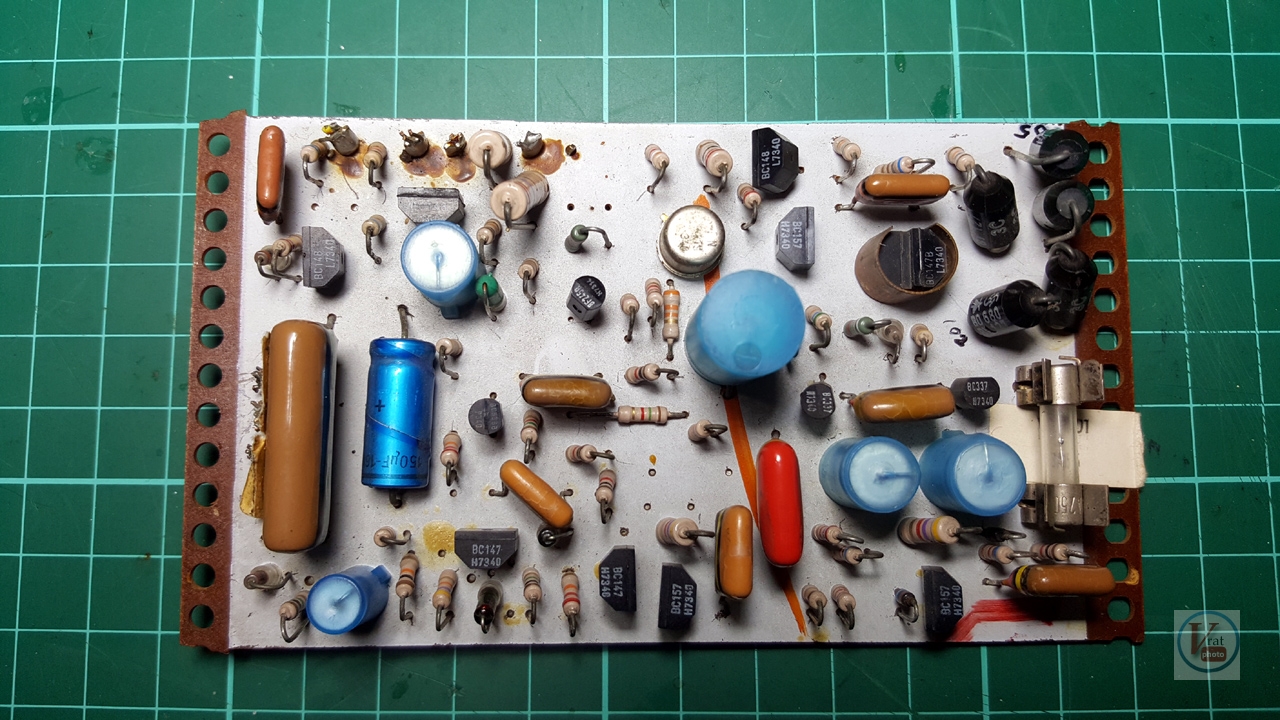 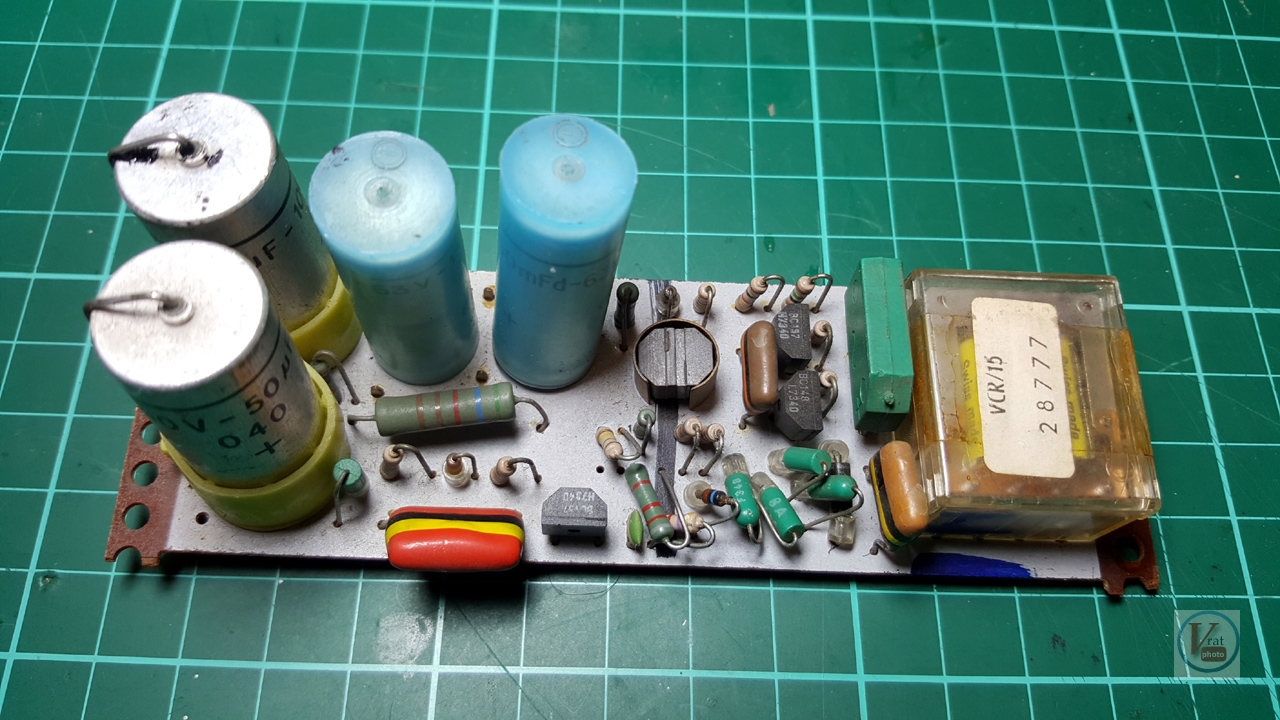 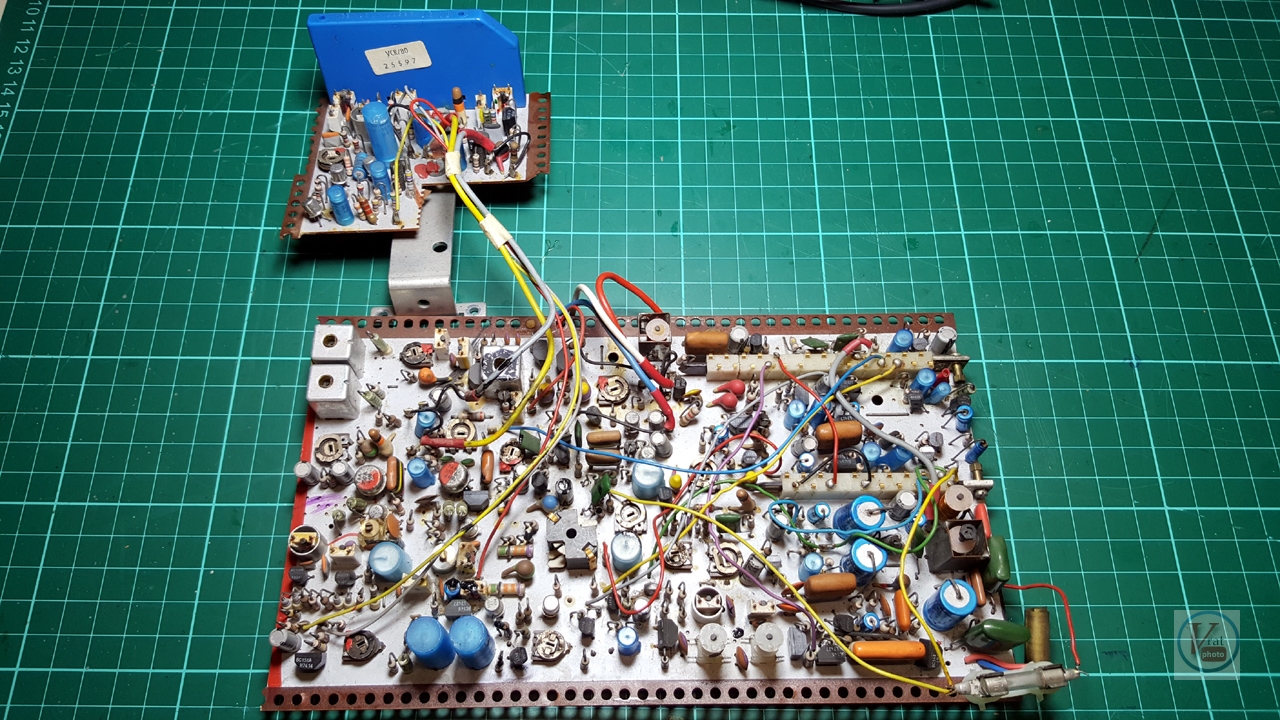 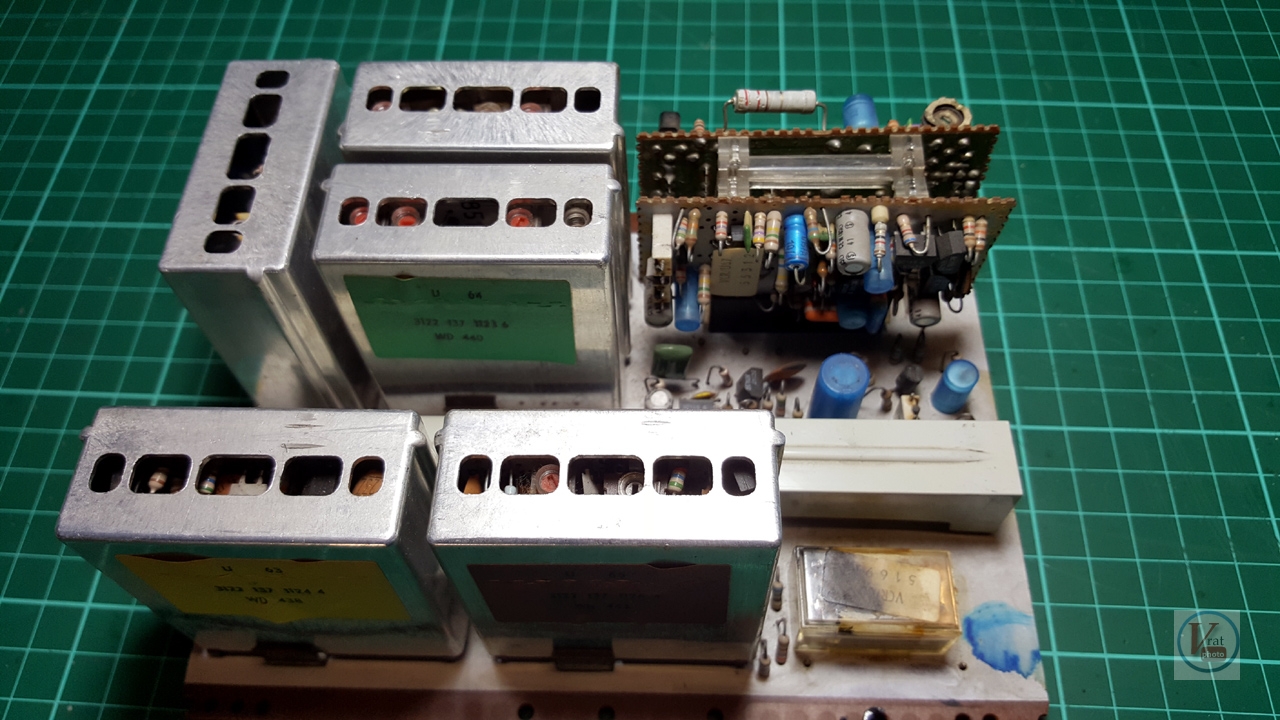 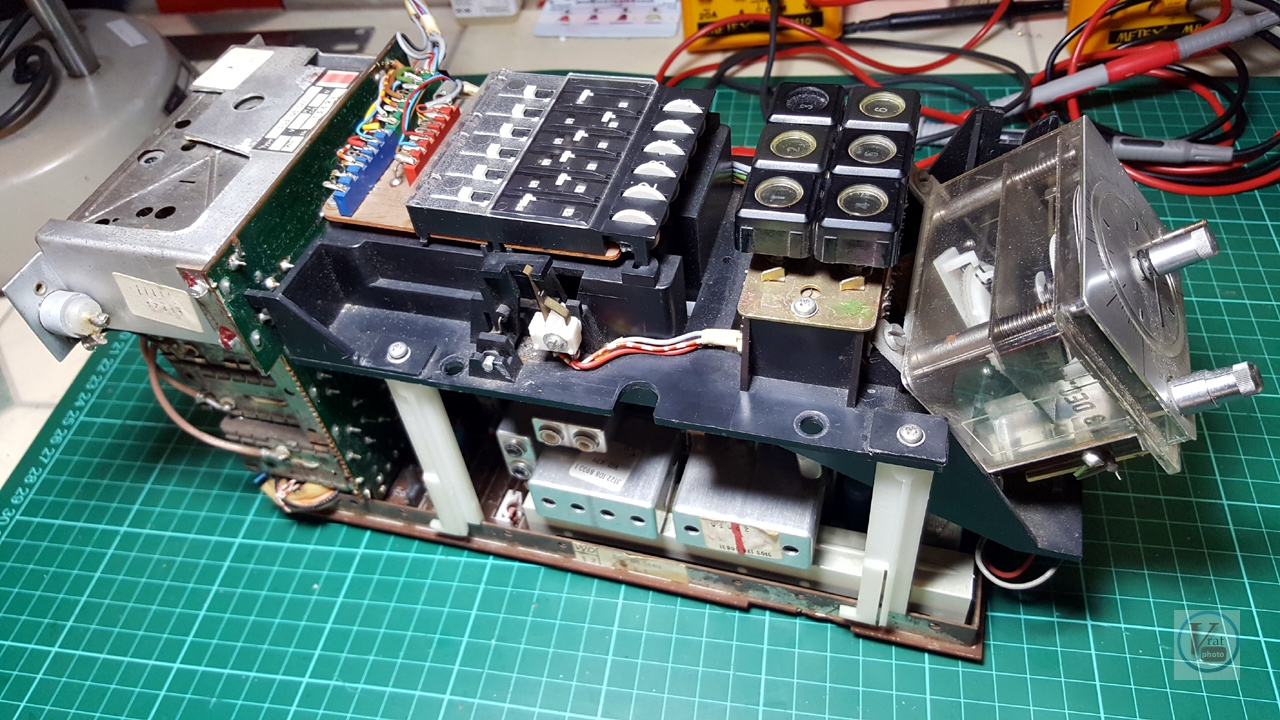 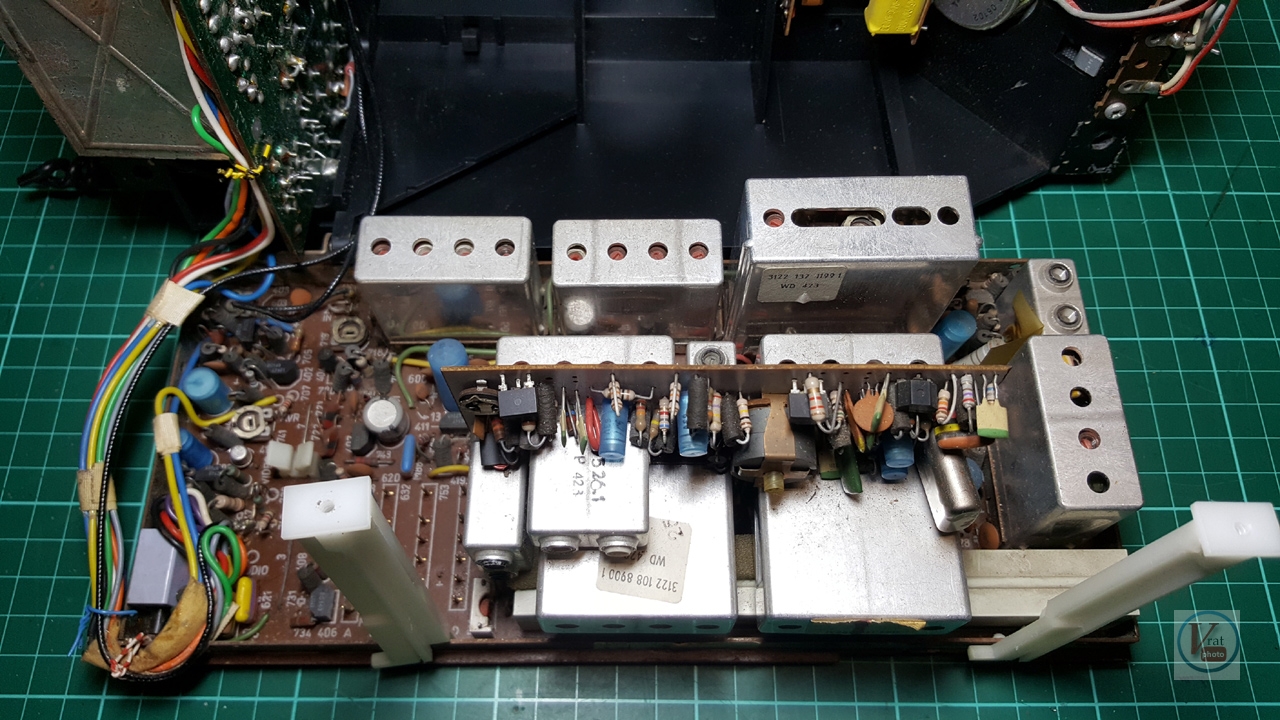 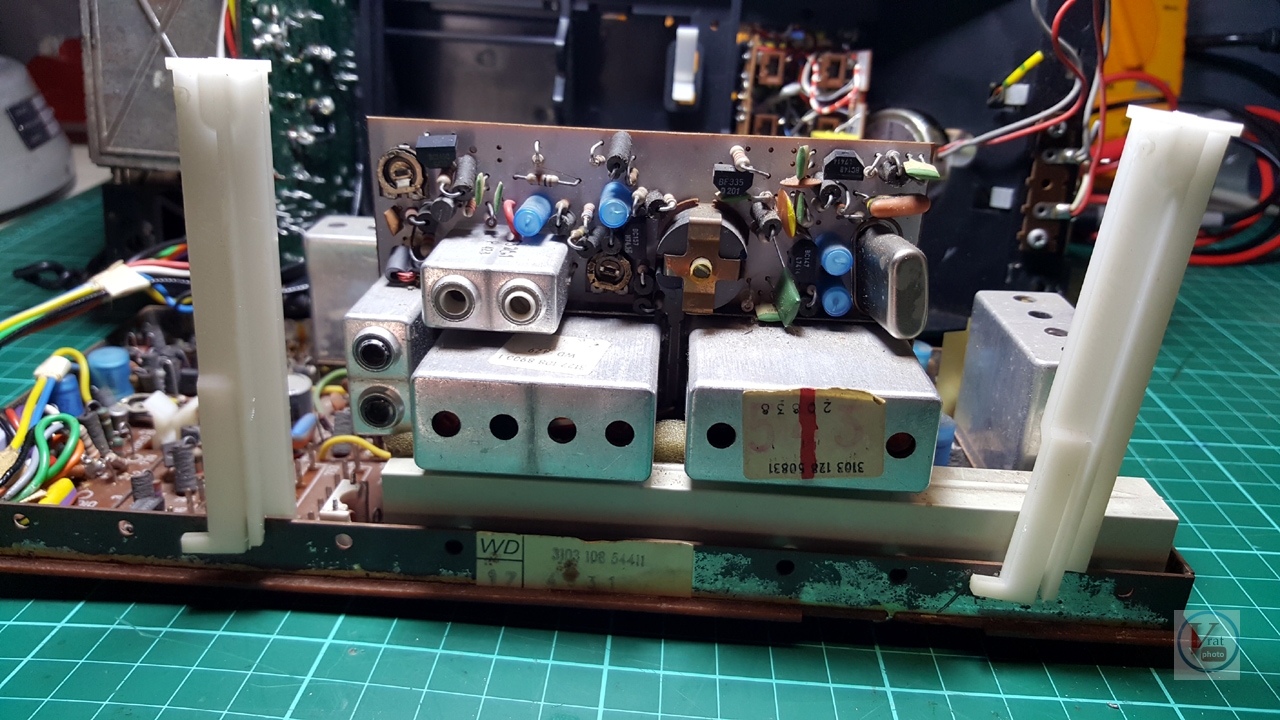 This VCR over the past weeks or so has coughed up fur-ball after fur-ball and has kept me very occupied. First the tape transport motor failed, totally seized up good and solid, thankfully I had procured another sacrificial deck so pulled its motor, that got over that hurdle. 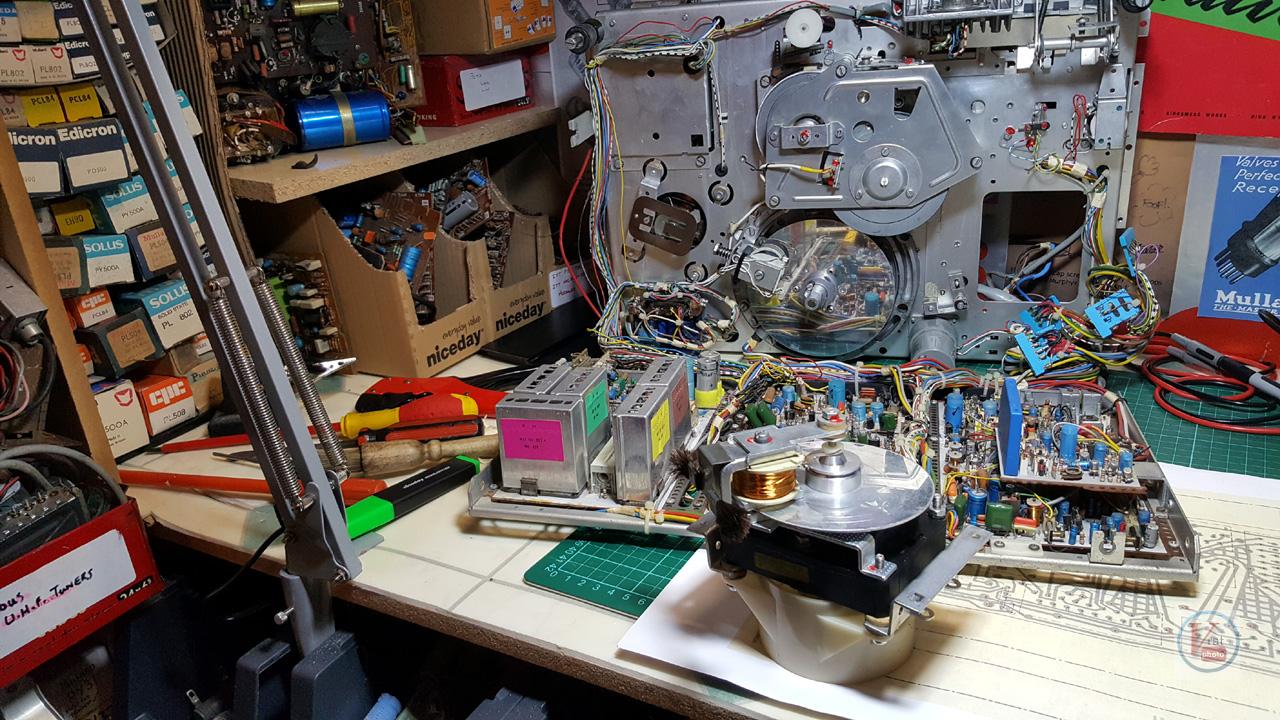 Then the tape transport safety circuit ceased functioning, this is supposed to switch the VCR off after 45 secs. No E-E and no video output also manifested itself. The VCR powers on OK, the drum lacing loads the head into position and the Play, FF, REW and Rec functions as expected along with the Off which de-laces the drum/head. The faults thus far 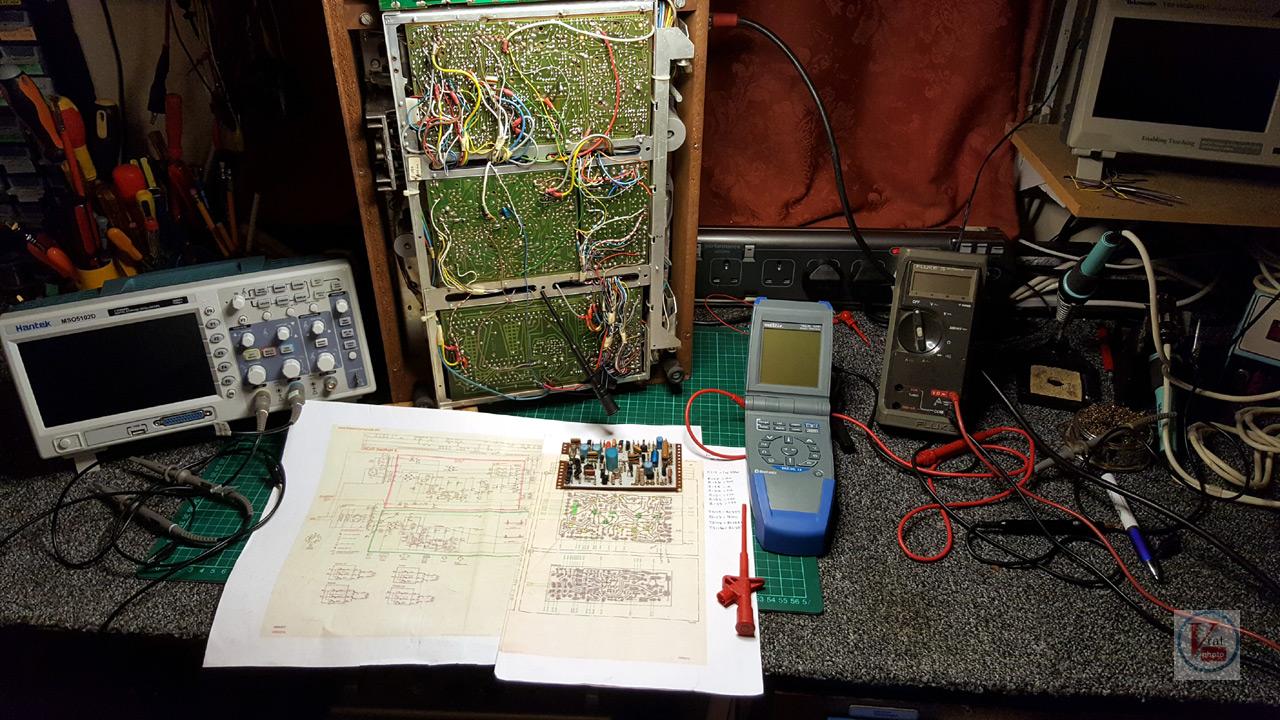 Next item two, this is where I left off, its worth going over again exactly how the head protection delay circuit is supposed to operate.

Investigations started with the first problem namely the protection circuit, as mention above the purpose of this is to switch the VCR off if no tape transport button is pressed within 45 sec.  The reason for this is the tape is statically laced into position and the heads come into contact with the tape. If no transport action is initiated then due to the heads being in contact with the tape and there being no tape movement there would be a risk of tape wear in one place hence the safety circuit. 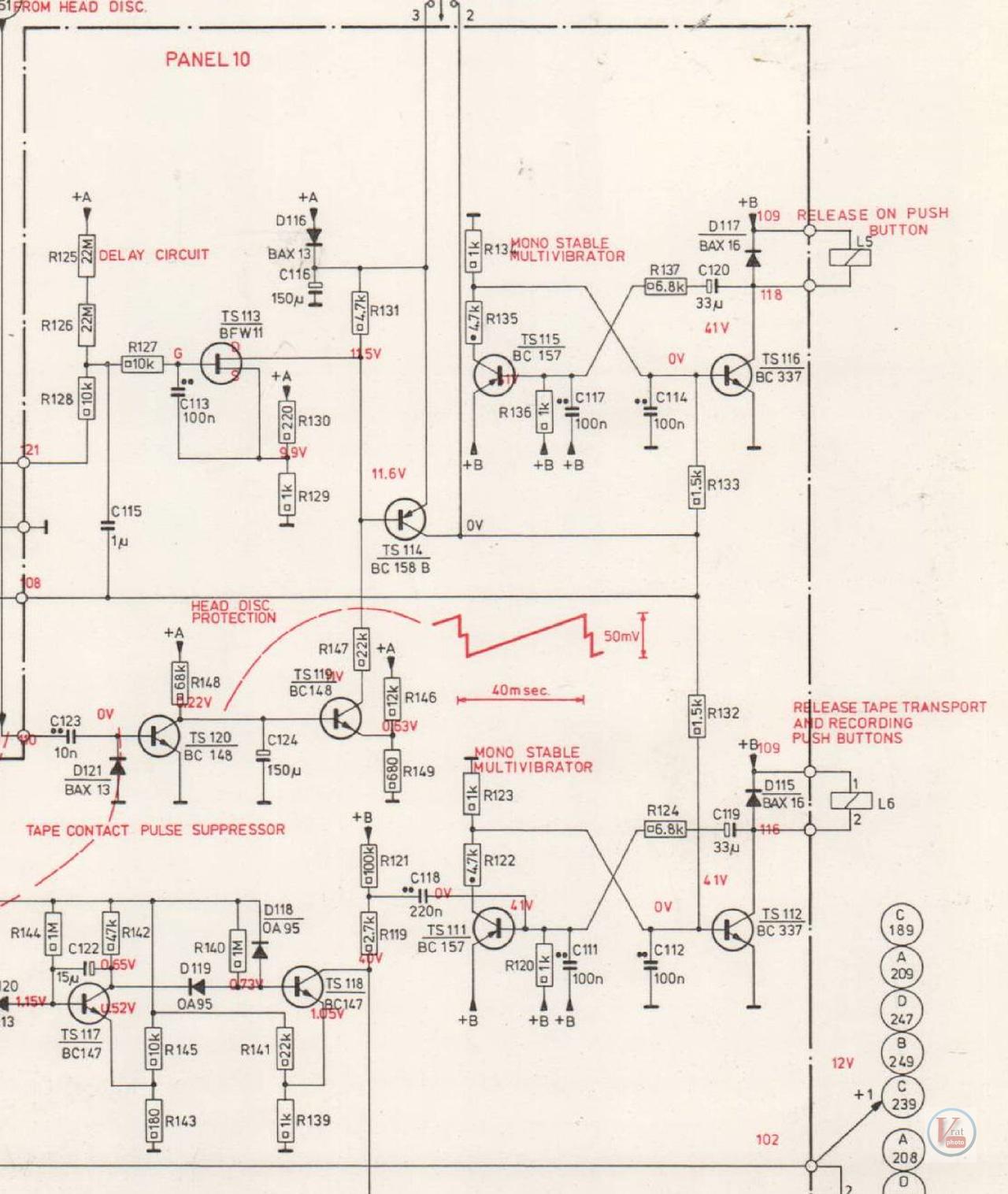 I had checked the 12V supply which should be present and the R125 delay circuit, it was missing. Working back to where the stabilised 12V rail is formed voltage checks back through TS104,03,03, & 01 revealed they were way off.

Checking the AC input of the full wave bridge confirmed via the scope I have 18.4VAC going in but only 2.5VDC coming out. By my reckoning you calculate the full-wave bridge VDC out as VAC * 1.41 which gives me an expected output figure of 25.944VDC. Allowing and deducting the voltage drop across the four diodes, (0.7V x 4) it should be giving me an actual VDC output from the bridge of 23.144VDC. 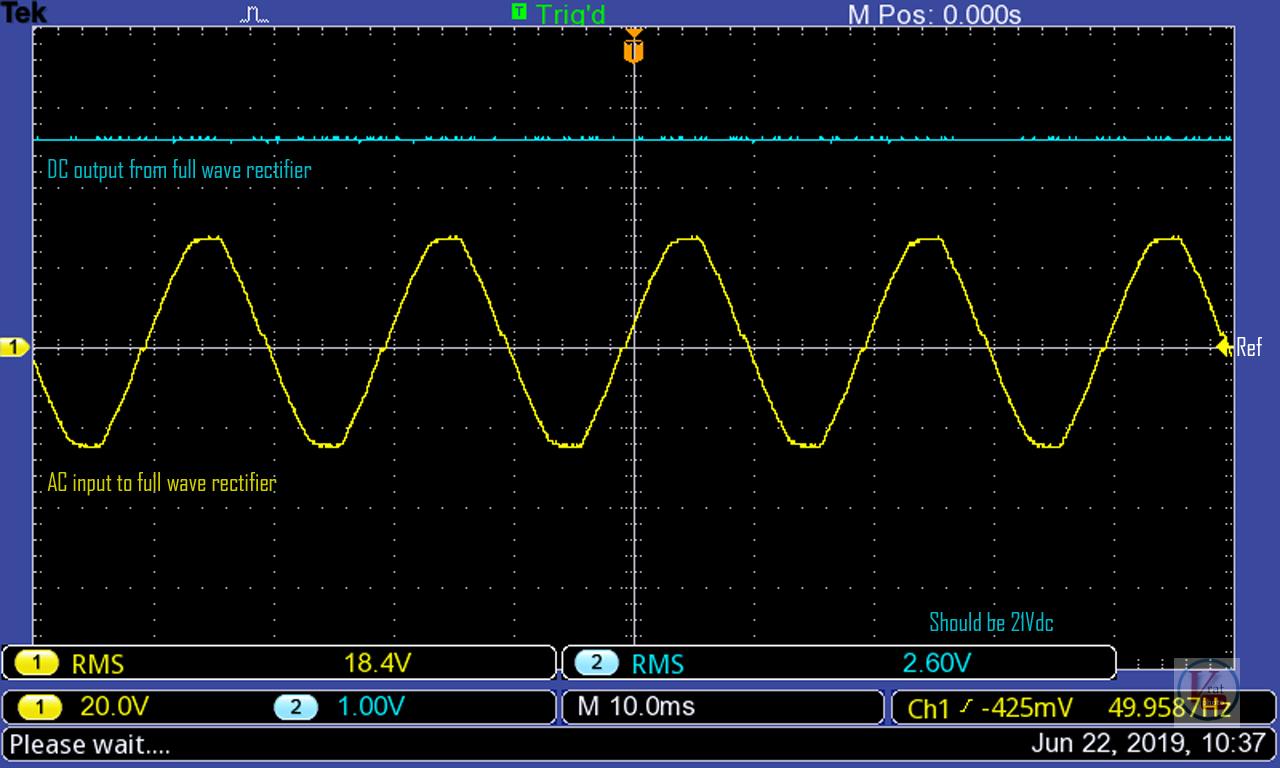 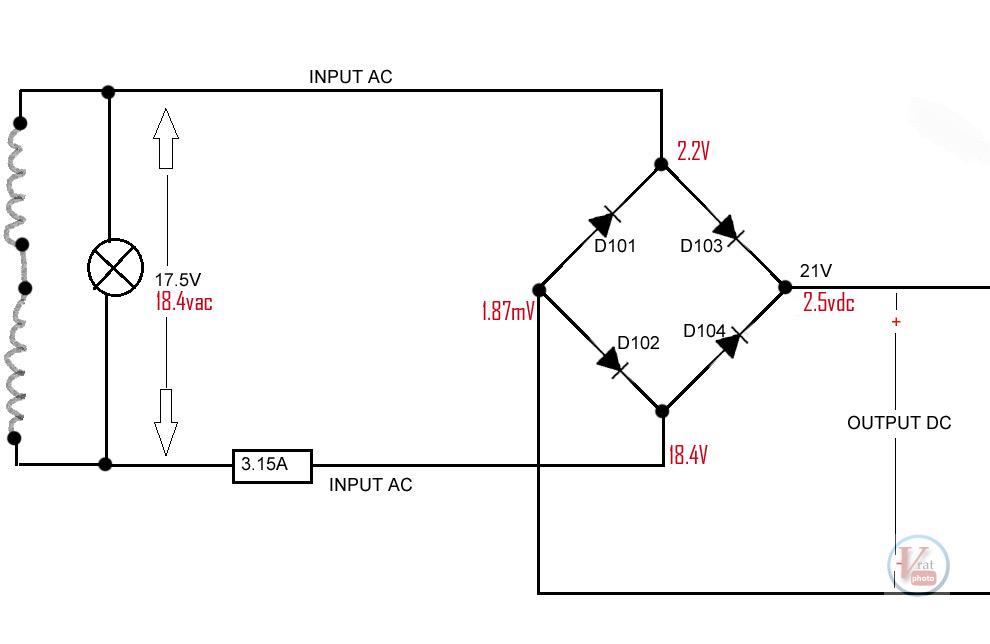 The Philips circuit actually states a 17.5VAC into the bridge  so applying the same math 17.5 * 1.41 = 24.675 – the 4 diode drop should give the DC output of 21.875vdc (near as damn it to their stated 21V). My input is 1V higher and my output is a lowly 2.5VDC a whopping discrepancy as can be seen above in the scope trace of the bridge rectifiers input and output

In circuit tests of the diodes shows roughly .500v drop across all diodes. 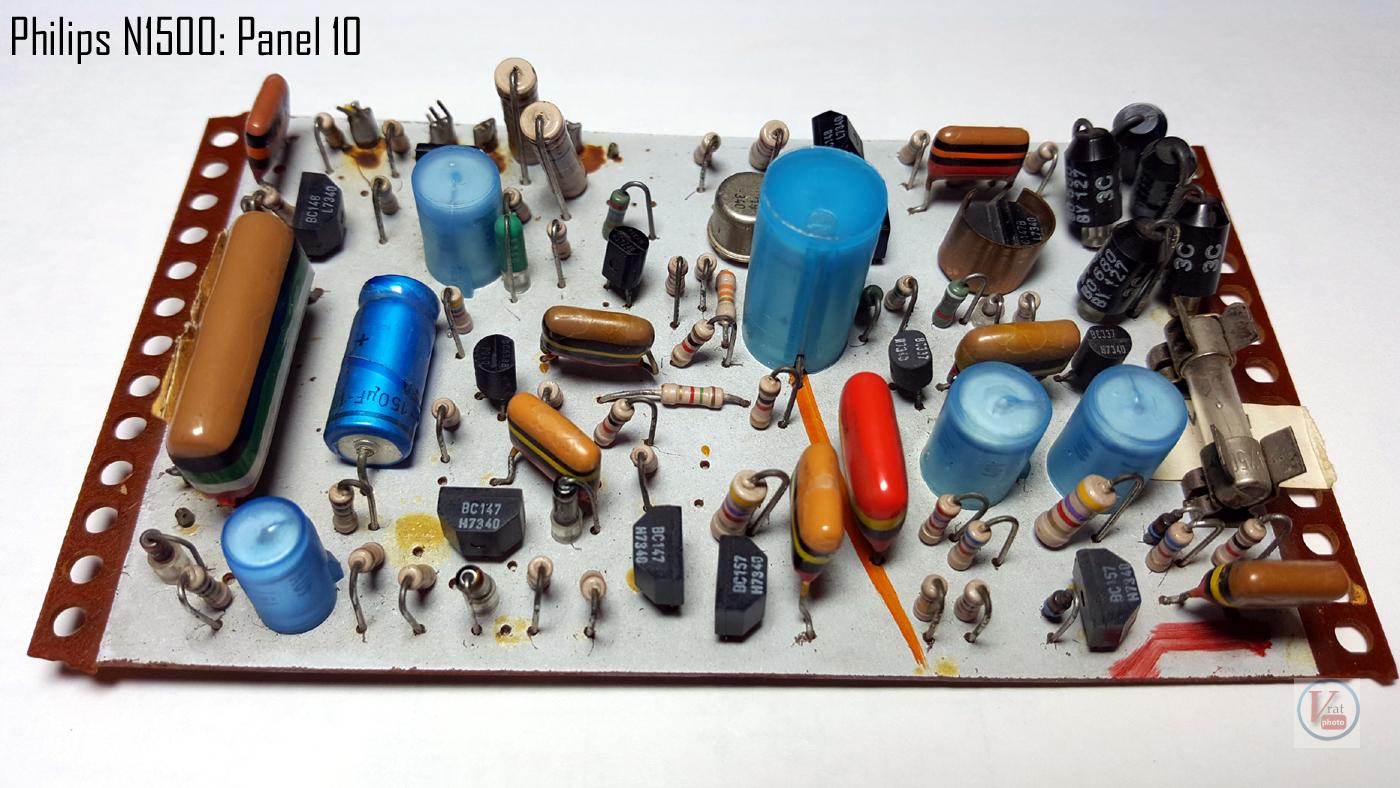 I suspect the bridge, however in circuit testing is leaving me more confused than anything. Therefore nothing for it but to unsolder the rats nest of wires to module 10 so as to be able to gain access to remove the 4 BY127 diodes and test them. What’s the betting they will be innocent, though I fail to see what else could be the cause other than a failing bridge. Happy to stand corrected if I’m missing something blindingly obvious to others looking in. 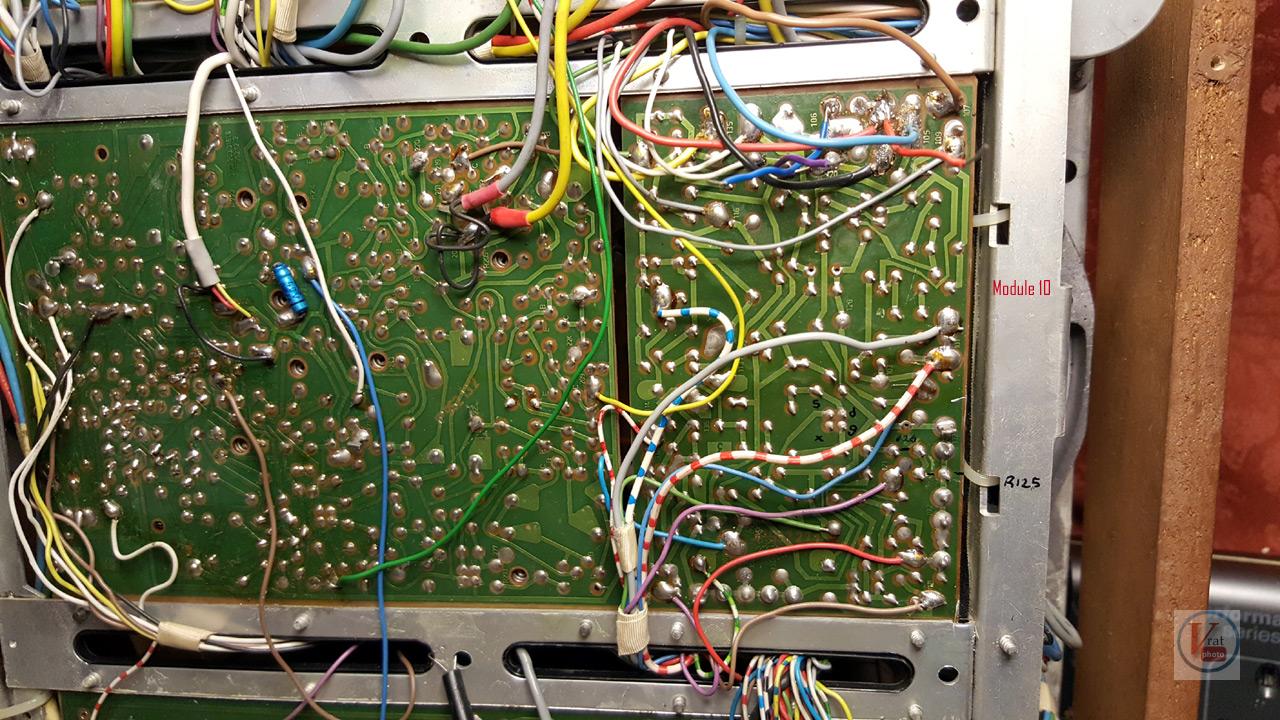 I tacked in 4 new 1N4007 diodes on the print side. The stabilised supply is now reaching the delay circuit which in turn means the protection circuit is now also working, it kicks in as it should at 45 seconds unlacing the head-drum from operation and powering down. 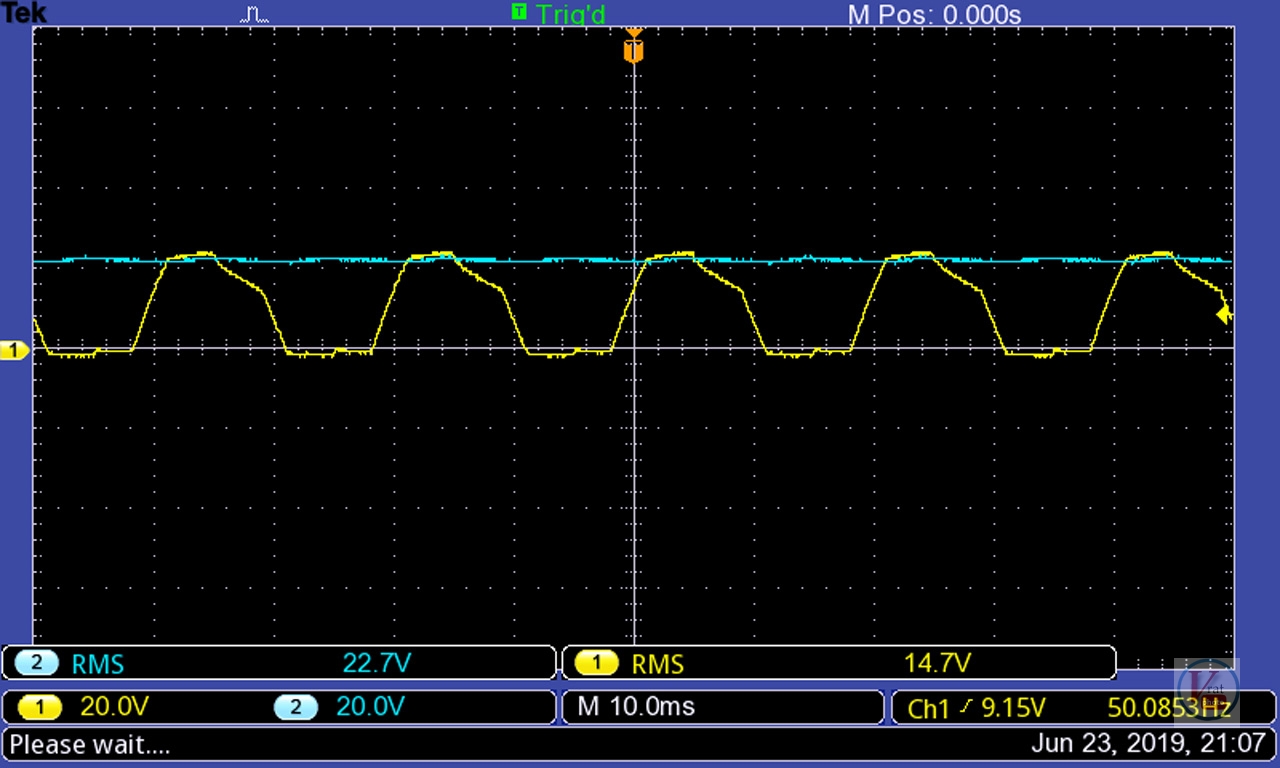 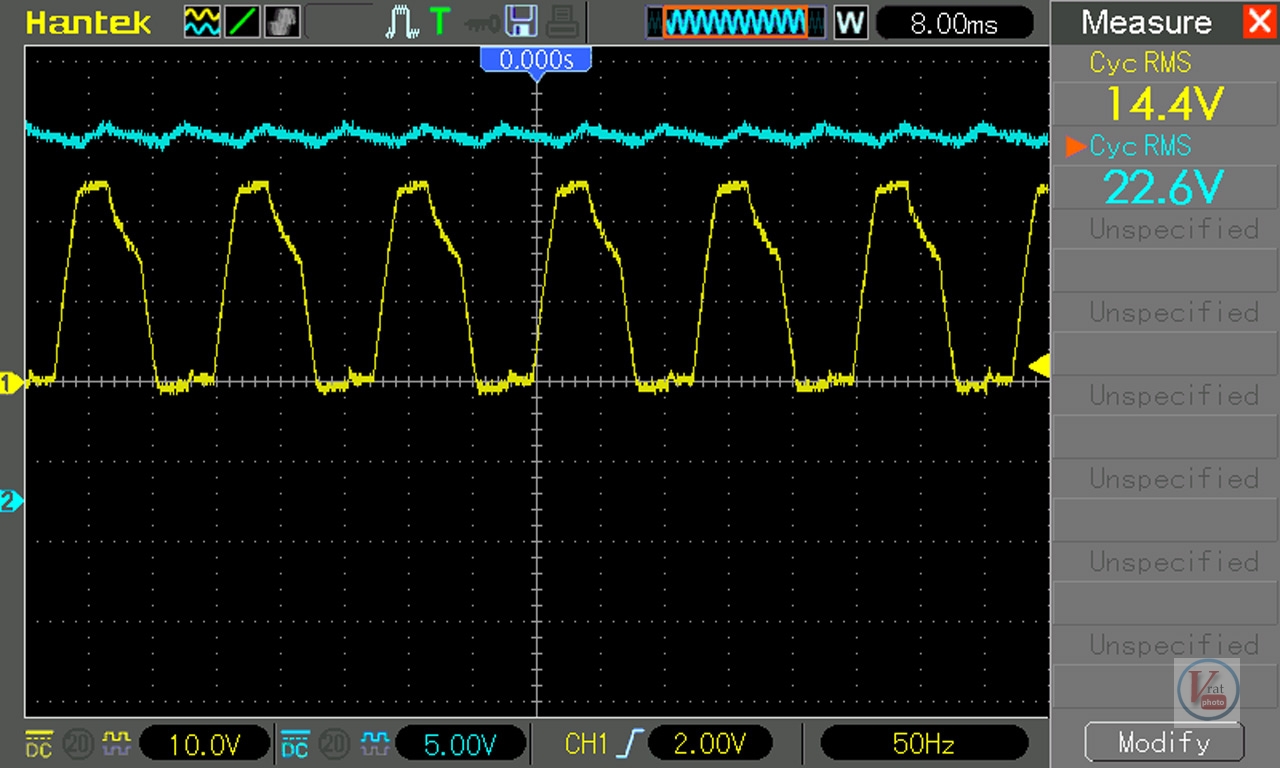 This seems to fall smack into the Sherlock Holmes quote “When all else has been eliminated, whatever remains however improbable, must be the truth”. So despite the bridge testing in circuit as OK, the bridge was behaving as faulty and it indeed was. 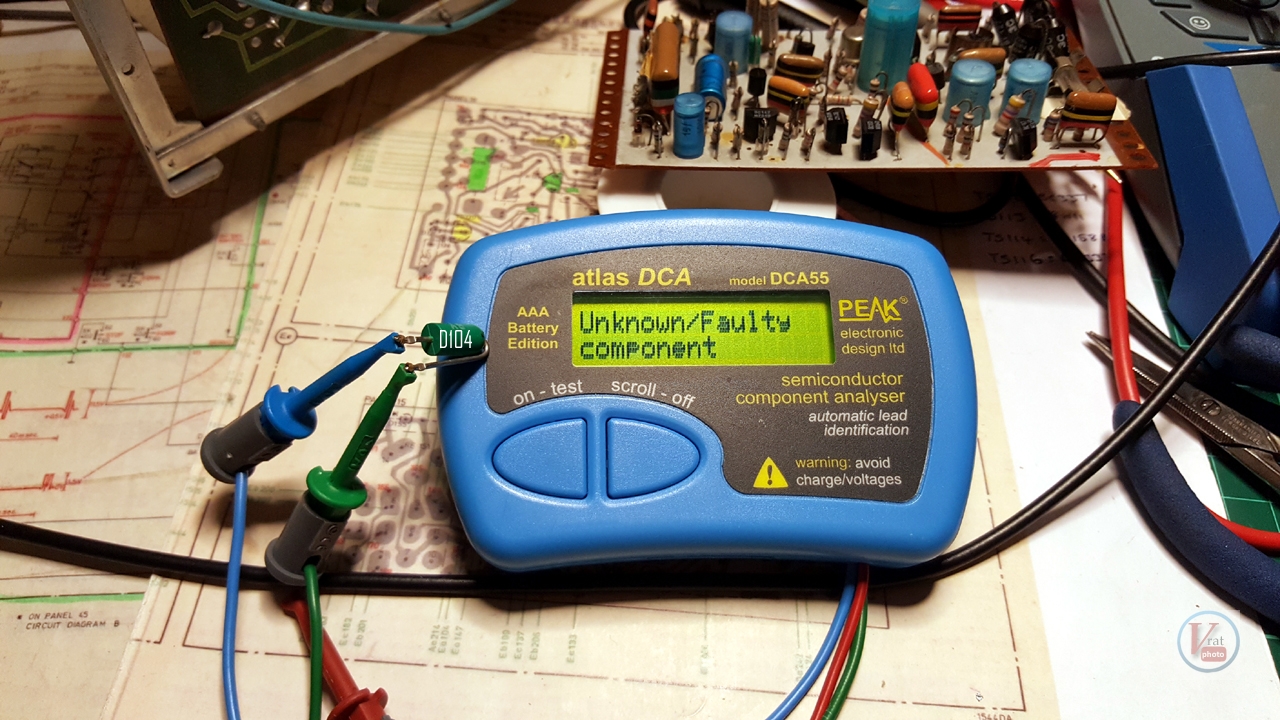 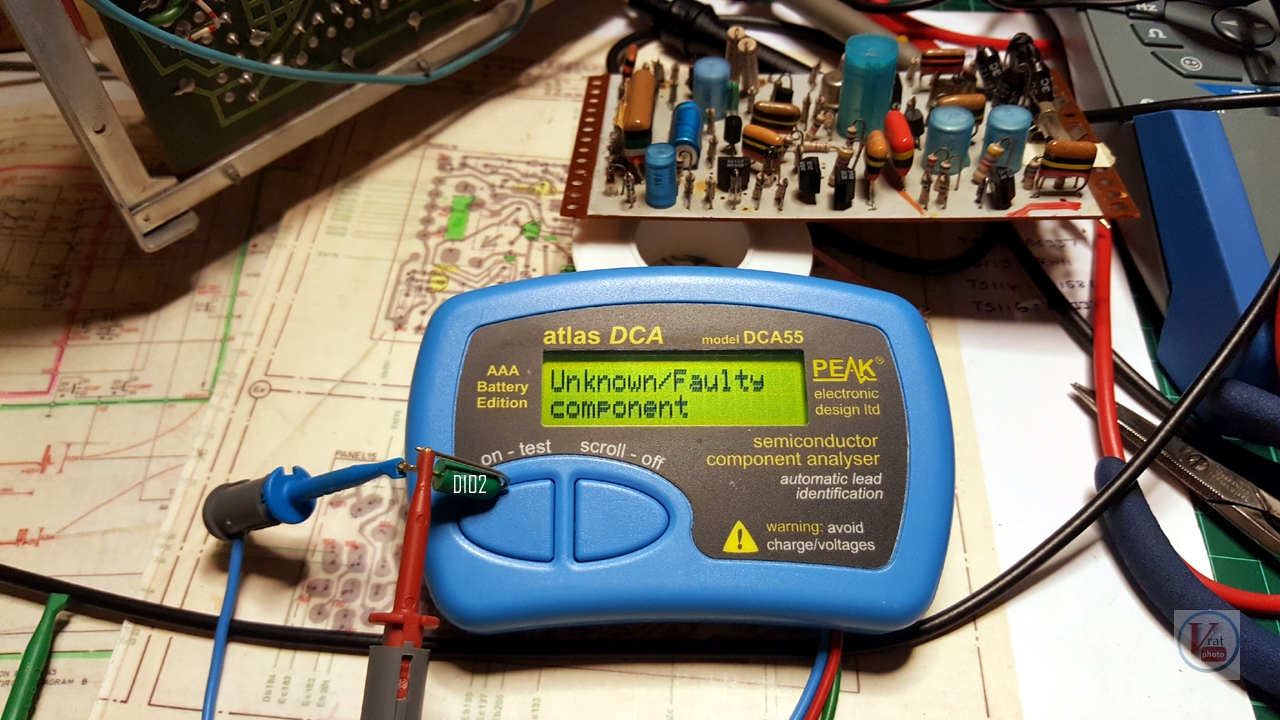 The pads were cleaned and the new 1n4007’s installed. 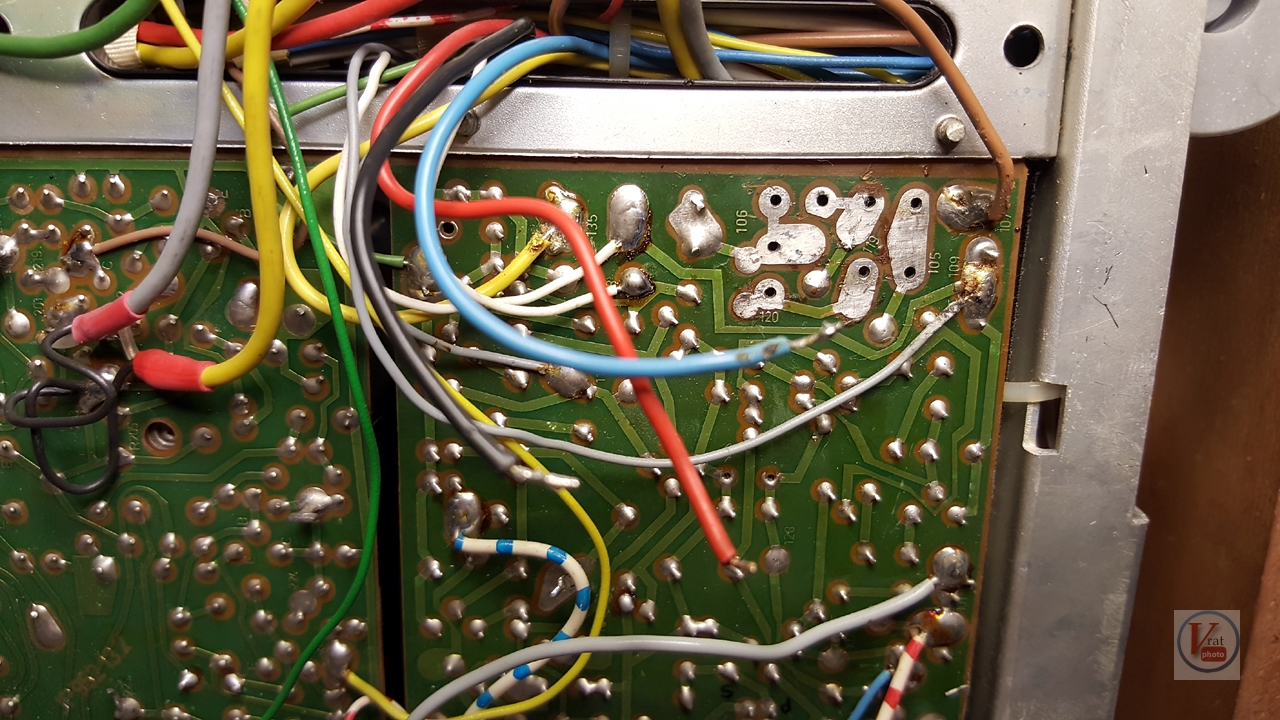 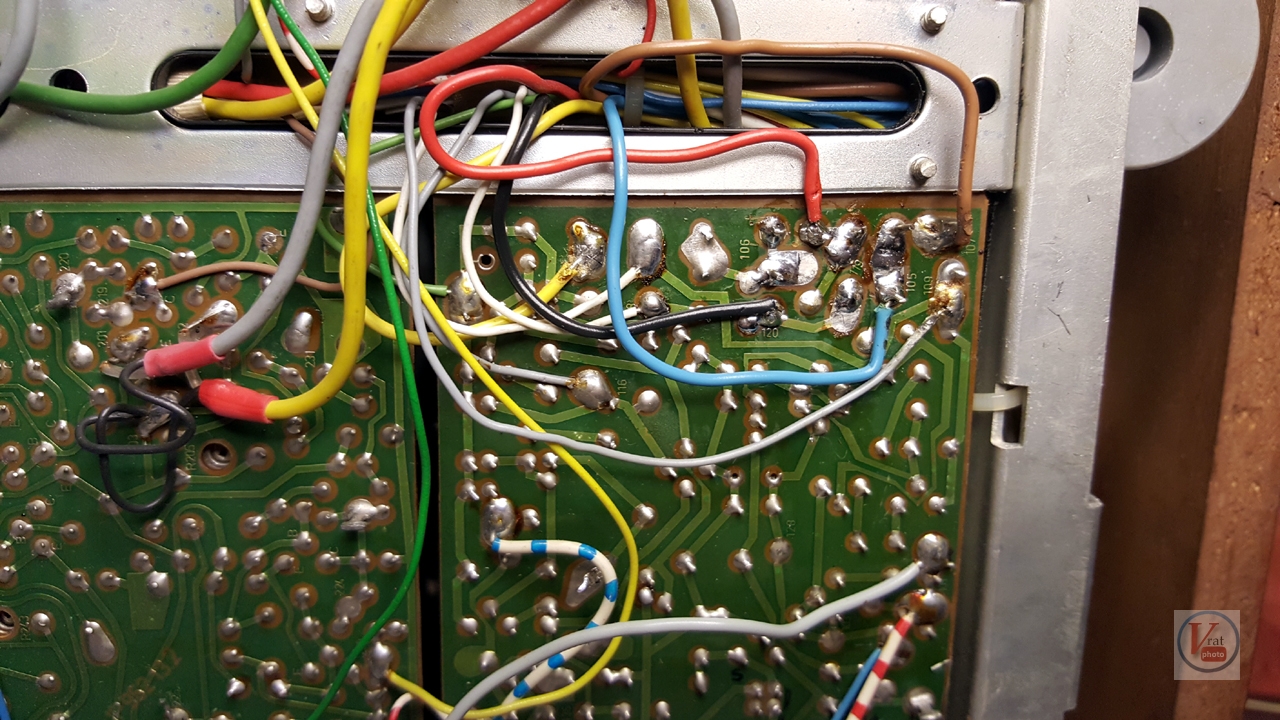 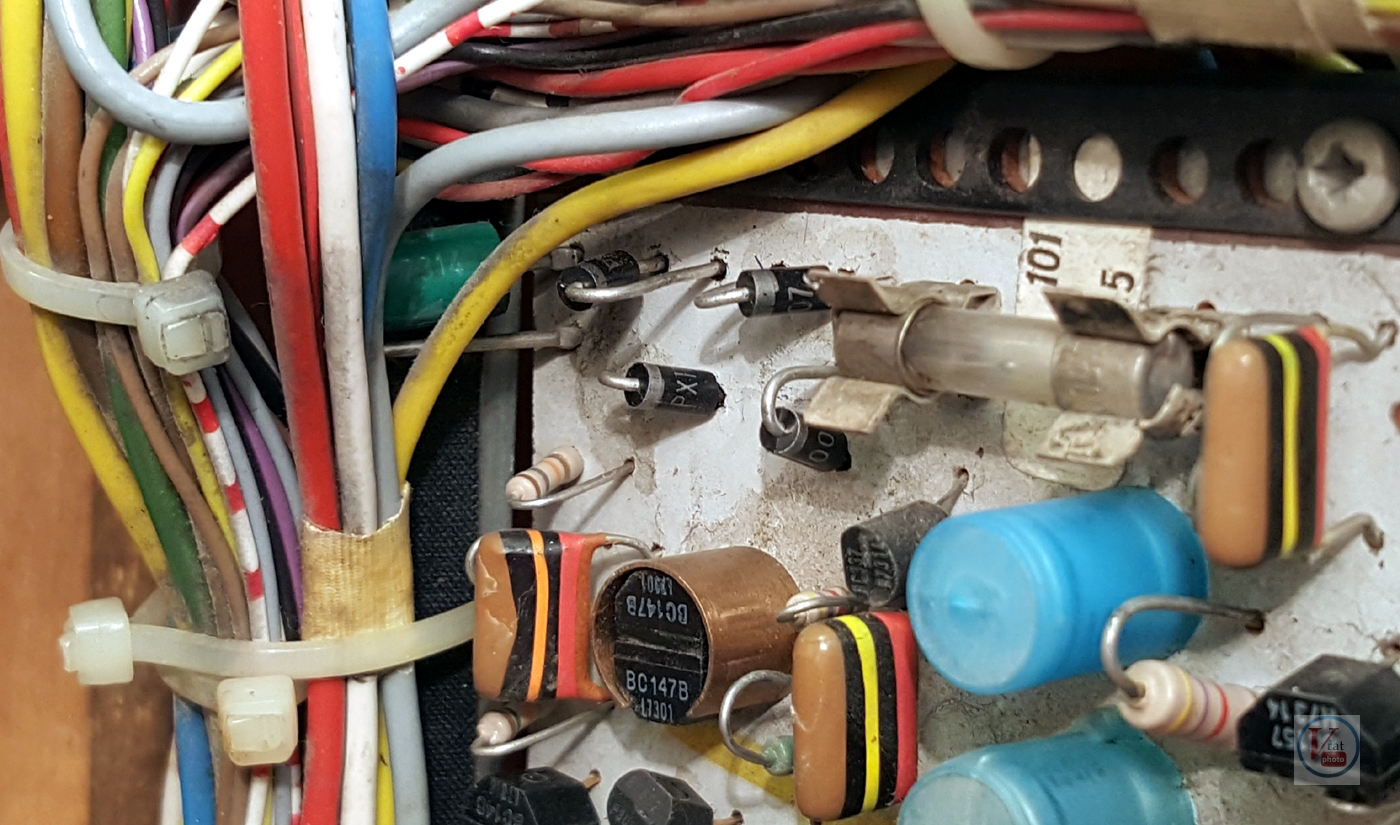 I then powered up and scoped the bridge input and output. Again the AC is still lower (by 1.8V) at 15.7V than specified on the cct and what I was getting before changing or adding diodes (18.4V). The DC is much higher now at 23V but the AC waveform is still horrid not a good sinewave at all but significantly clipped. 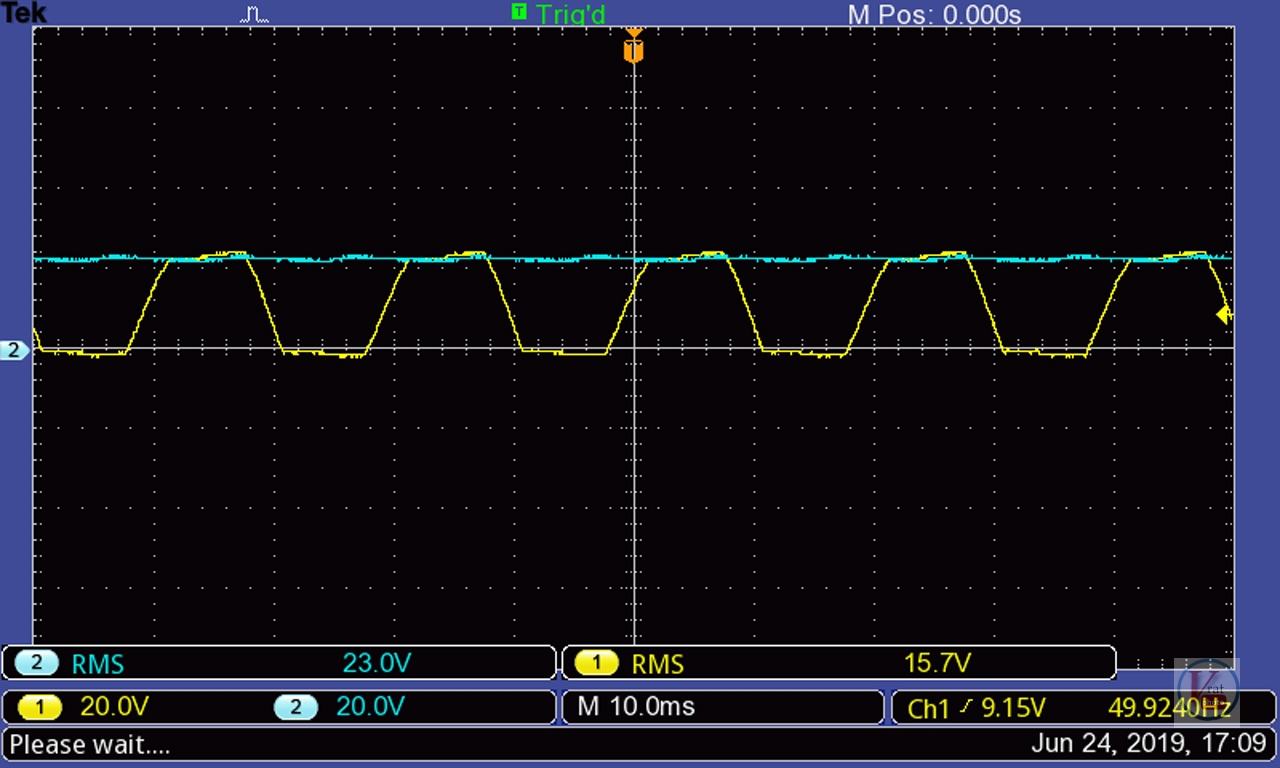 This is how the AC waveform looked right at the very start when I suspected a problem with the bridge but hadn’t done anything to it, as you can see the AC looks cleaner. No idea why this should not be OK now it almost looks like its full-wave zener clipped but its not.

Jayceebee said:
Don’t concern yourself about the AC input as it’s unreglated, take the machine to three different locations and you will get three different results. As long as TS1 can output a constant 12v with minimal ripple you’ve no need to worry, anyway onwards and upwards. 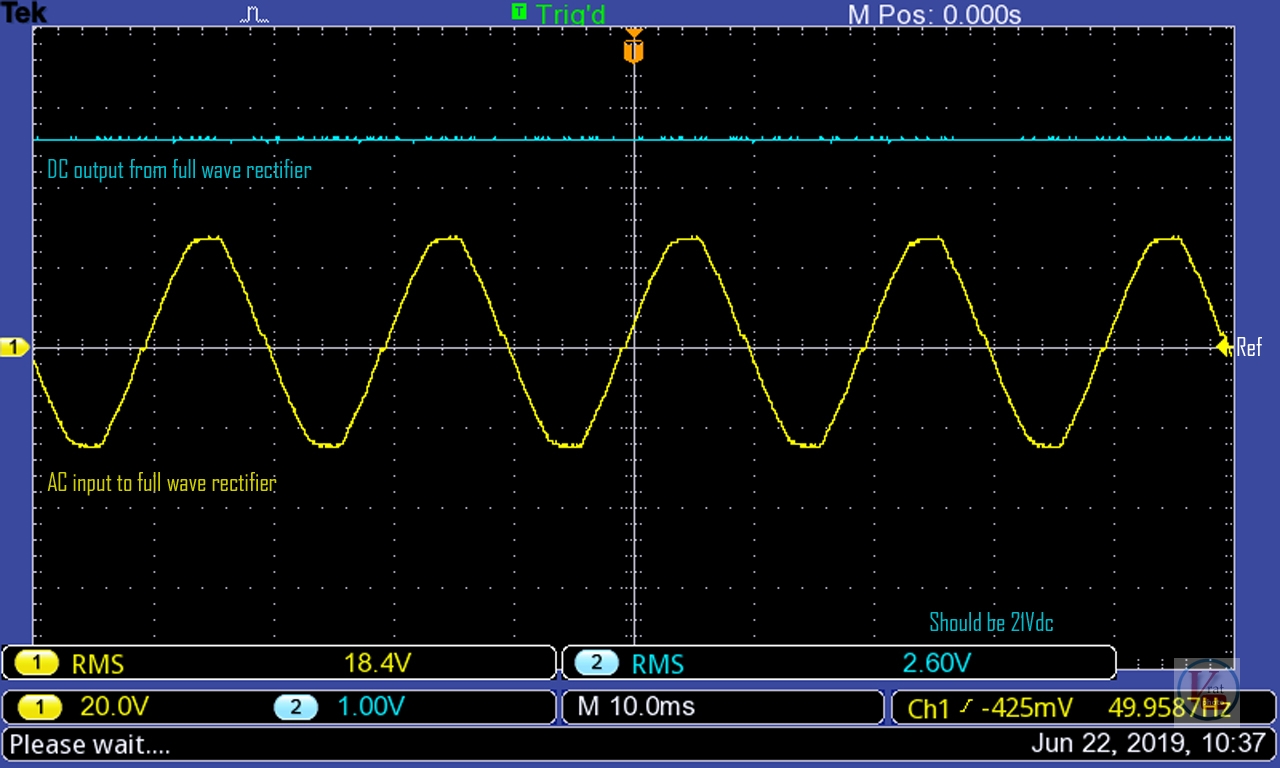 Oh and the safety circuit is operating at 20 sec now not 40sec. Not a real problem as its only there if no transport keys are pressed to save the heads, so 20 secs makes no difference really.

Tuning the VCR’s inbuilt tuner to a broadcast signal, that signal is then in turn displayed via the channel on the television that is tuned to the VCR. Hence referred to as “Electronic to Electronic”.

The AC waveform plot dated 22/06/19 at 10:37 shows signs of transformer core saturation. I did a check on a transformer at hand, and this too provided a 22V output clipped in a similar manner to yours. Nothing to worry about as commercial practice dictates how close to the edge this needs to be for a given temperature rise.

It might be worth a check on loading of the other windings and say D105 of the 41V supply.