At the time of its launch Video 2000 offered several innovative features unmatched by the competing formats VHS and Betamax:

Thanks to DTF, V2000 is able to play both fields of the image in still frame mode, providing full vertical resolution whereas VHS and Betamax could only reproduce one field, giving only half of the normal vertical resolution. A real advantage of DTF on all but the very first V2000 models is the ability to provide picture search without noise bars across the screen, a feature domestic VHS or Betamax machines were only ever able to approach by introducing complex multi-head drums. 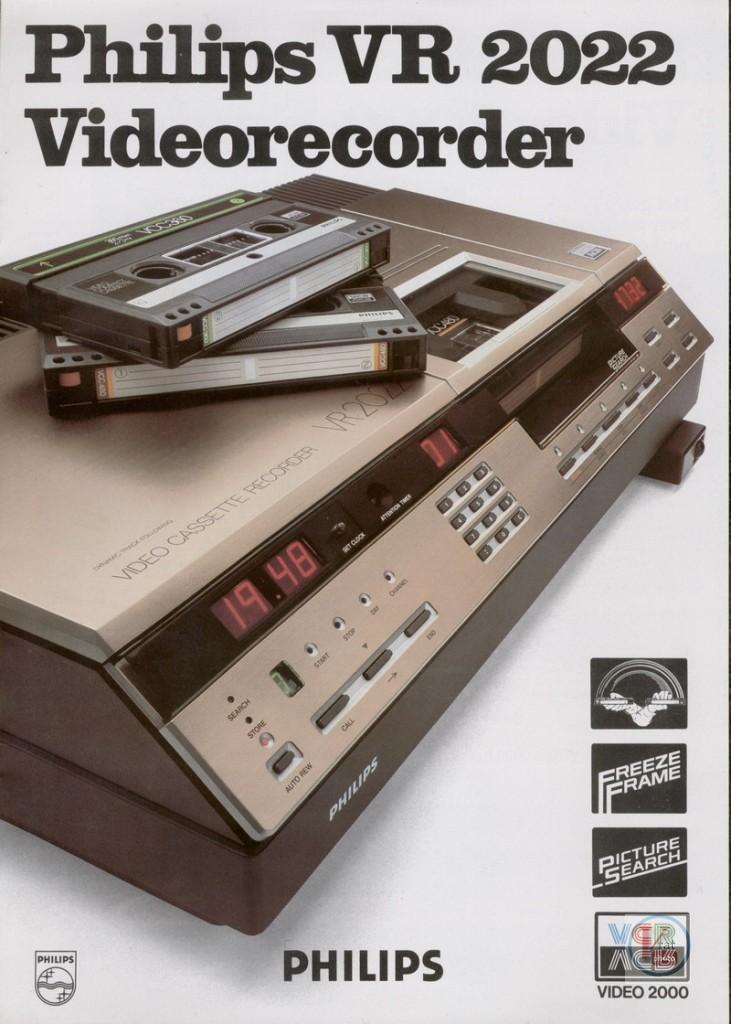 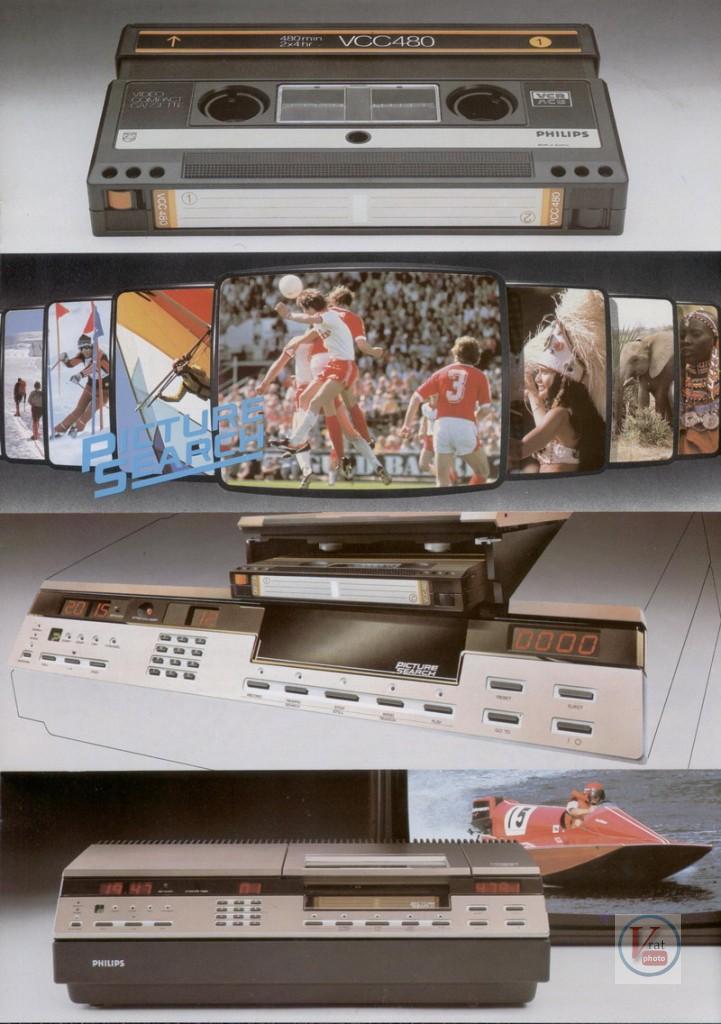 I was fortunate to obtain recently this Philips VR2022, what a large beast and very heavy too. Bought from the original owner which included 24 VCC 2000 tapes packed with period programmes and adverts. It also came with the instructional tape and the user manuals.

It works very well, giving a very good picture and the quality after all these years ( 36) was surprising. Thankfully no gooey bety syndrome here as the VR2022 employs direct drive. Nice to have a working VCR to complement the old CTV collection and a bunch of period tapes too.

Some shots of the unit, further internals to follow. 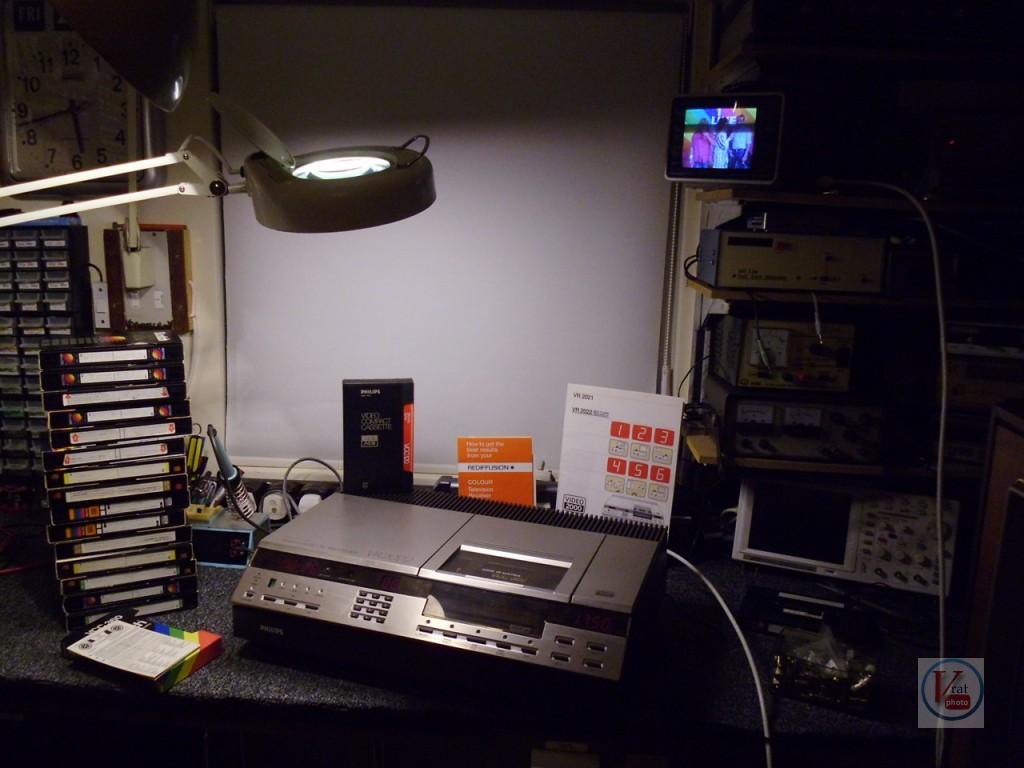 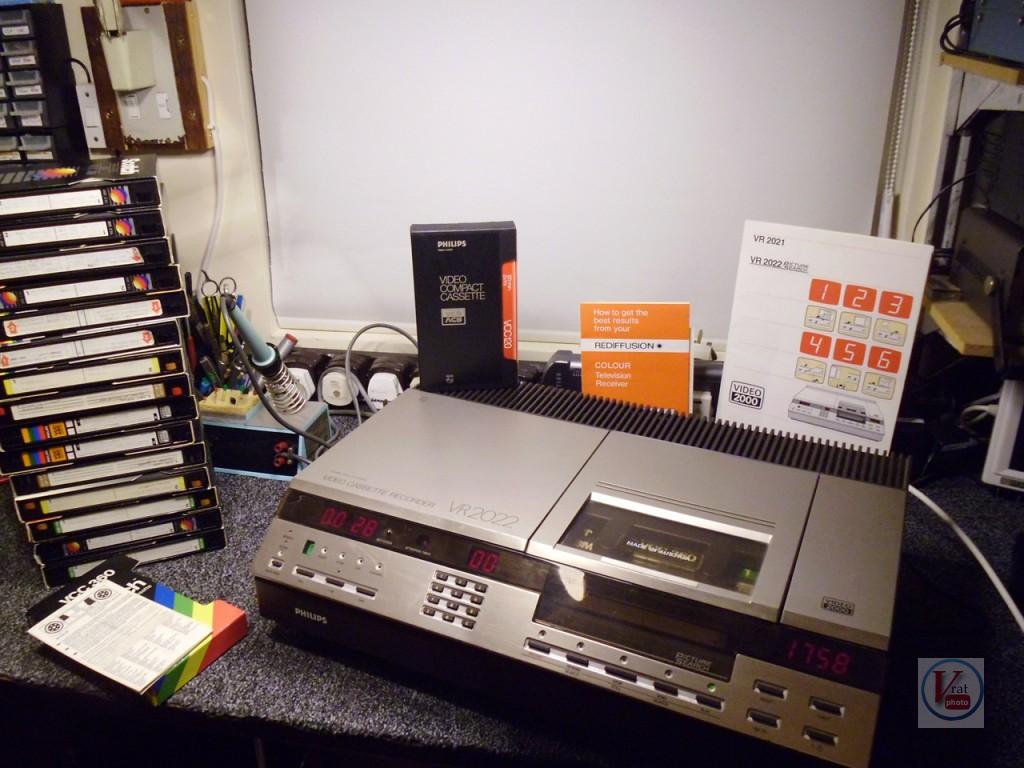 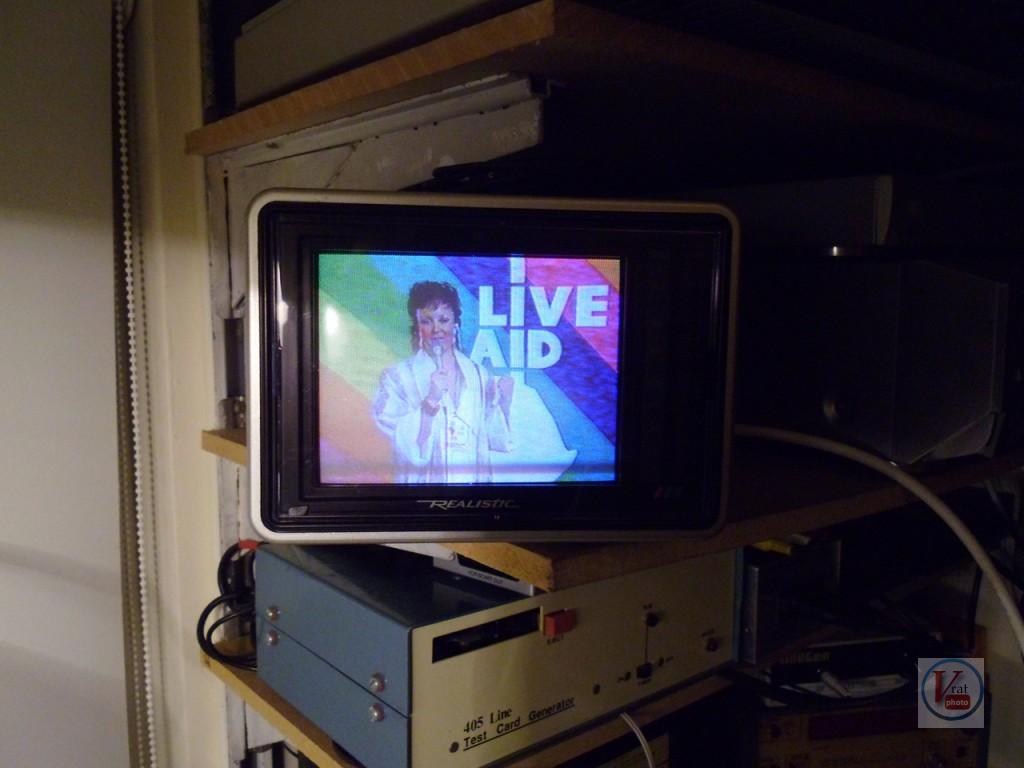 You’re just short of a Sony video camera CCDV100-E
Had the 2022, still got the 2023 and still got the Realistic small TV which can under-scan vertically but not horizontally.

Got the battery box for the TV filled with emergency lighting double D Ni-Cd cells because they were the high capacity variety.
Don’t leave that cassette tape on that corner of the VCR you’ll cook it as it’s just above the PSU!

You might like to track down a remote control for the VCR but you’ll need the receiving ‘eye’ as well.

The other ‘new’ feature these brought to VCRs was the ‘goto’ feature to fast wind or rewind to any tape counter value. Also, unlike the other systems of the day, fast wind and rewind were done without the tape being round the heads – reducing head wear, increasing tape transport speed.

Also, ‘direct control’ function, you press the button of the action you want without needing to press any other button first. E.g. from power off to play just by pressing the play button. This is totally true of the 2023 but the 2022 offers three buttons with dual function: rewind, stop and fast forward – which, while playing offered reverse play (5x?) pause and forward play (7x?).

Great to hear after all this time the VCR works well.

I sold a large number of these during the early 1980s. In October 1982, Philips paid for me and a dozen other dealers to fly out to Vienna and take a guided tour around the V2000 factory. While we were there, we were offered the chance to buy the Pye 20VR22 and 20VR23 mdels at a much reduced price and to set up a V2000 video library. Sadly, Philips decided to withdraw the V2000 format during 1984 in favour of VHS in order to cobat diminishing sales of product due to poor availability of software.

One thing I was meaning to ask the group about 1st generation Philips Video 2000 players: After much faffing about, I have a VR2022 and a VR2023 working. They are mostly fine, except after a few minutes there is faint audio background noise. In both cases it sounds like a sort of “railroad train” running in the distance. It’s only really noticeable in quiet scenes. I suspect it’s some sort of vibration from the mechanics as changing out the audio boards makes no difference on either machine. (I have tried multiple audio boards from scrap VR2021/VR2022 machines as well.)

Has anyone noticed this and any ideas?

Hi, that hiss comes from the belt skid motor rubbing against the rubber brakes. Simply lubricate it. All the best.

Hello
I need to replace the back up battery on my Philips 2022 video recorder, does anyone know the voltage of the replacement battery ?
many thanks

Thank you
Just replaced the battery but now the clock display flashes and cannot get it to display the time and no other functions will work.
any ideas. ?

Hello, you have to set the time again, with the button on the right of the screen, you press it and the time disappears, you insert it again, separating hours from minutes with the button; and you give the first commented button again until the inserted time is set.

Used to buy ex-Visionhire ones from Birmingham market around 1983 and resell them in Coventry for a bit more. Later discovered that just around the corner from the market was the wholesaler where they all came from, cheaper of course. The guy in the market had huge piles of them for at least a year or two. Of all the ones we bought it was only my personal VR2021 that worked first time, all the rest had problems. My in-laws had a VR2020 sitting under the TV from 1983 until 2018 until I passed it on to a forum member. Other than a puff of smoke it still worked after 30 years of not being plugged in!