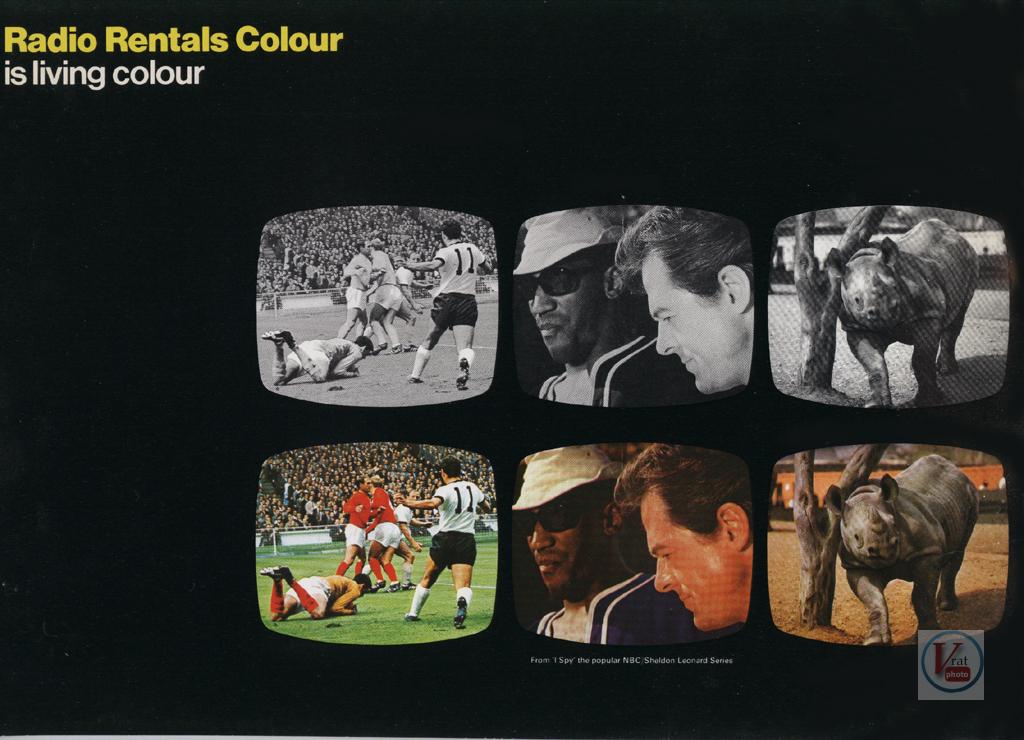 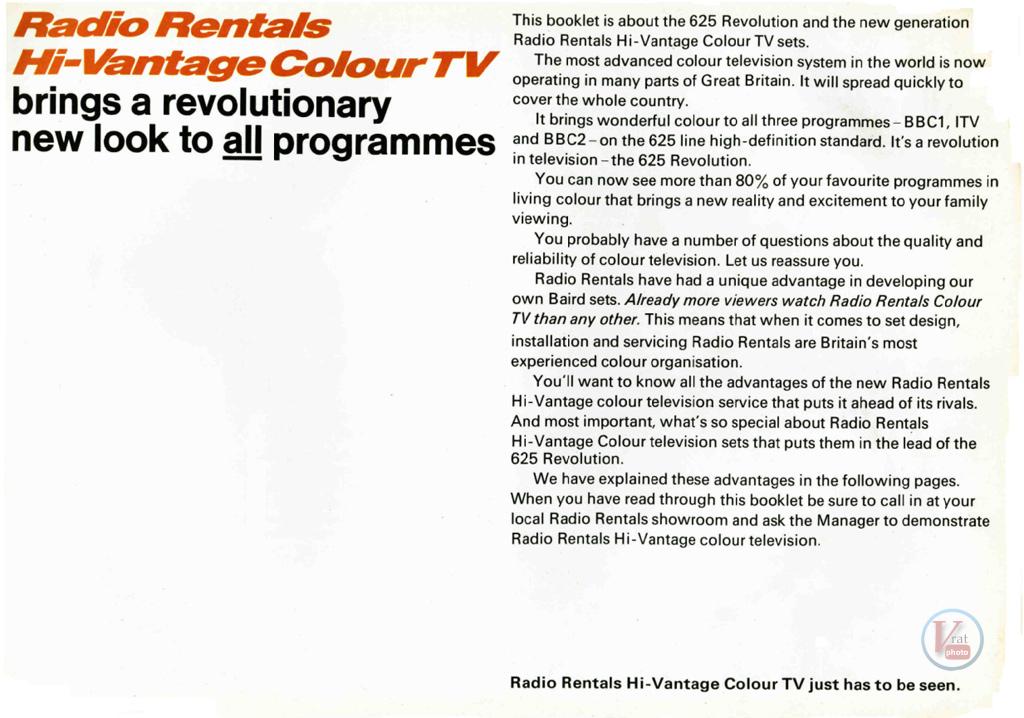 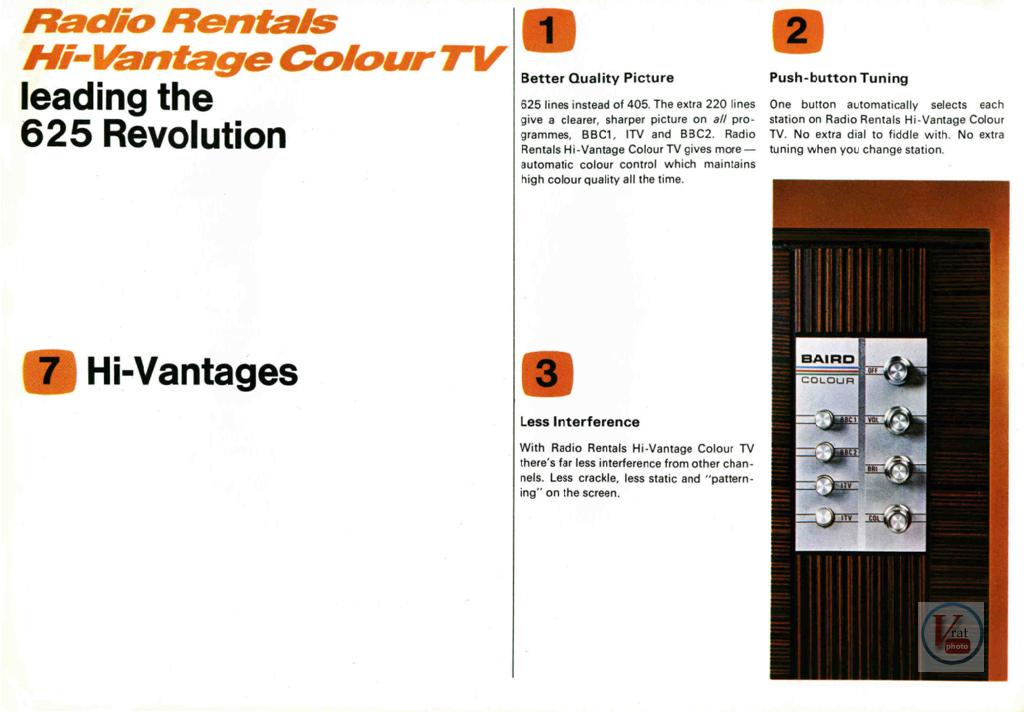 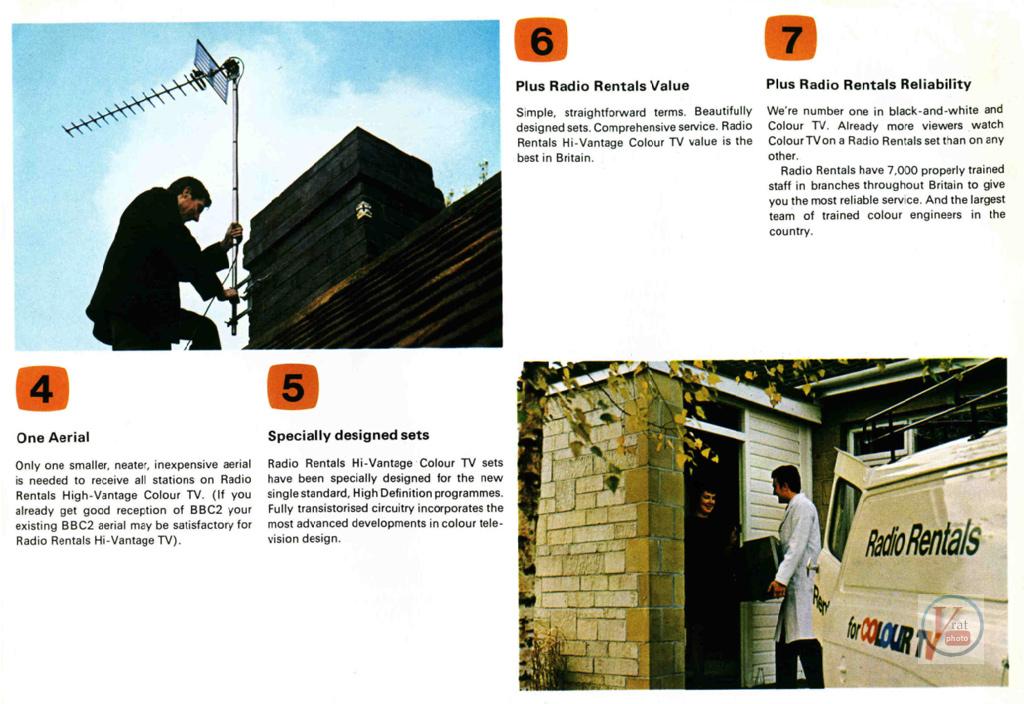 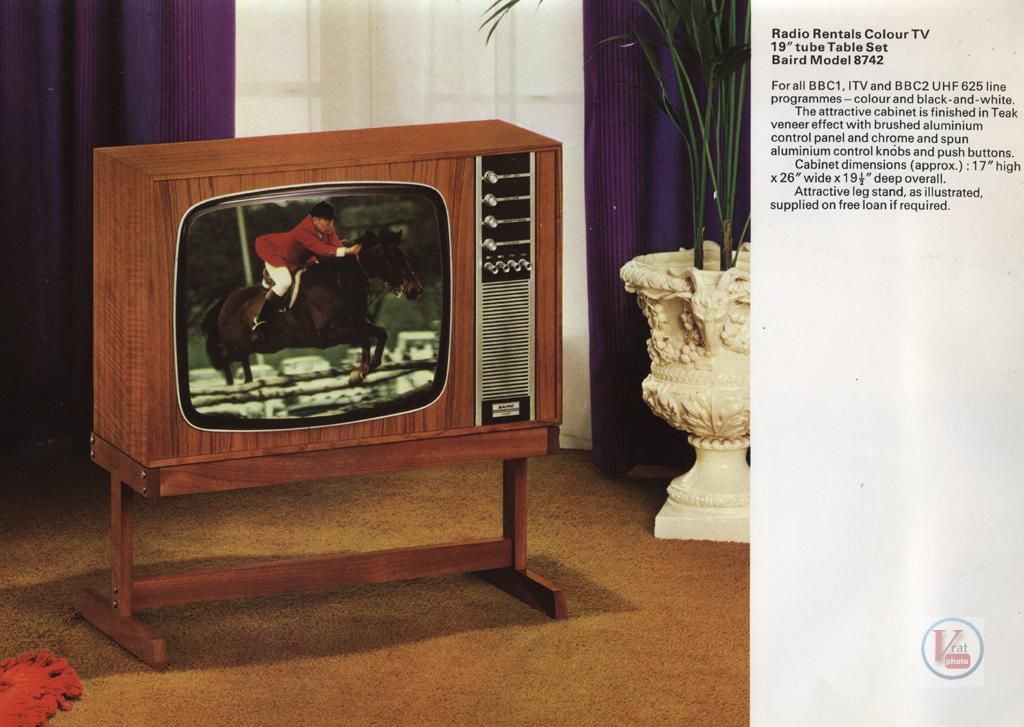 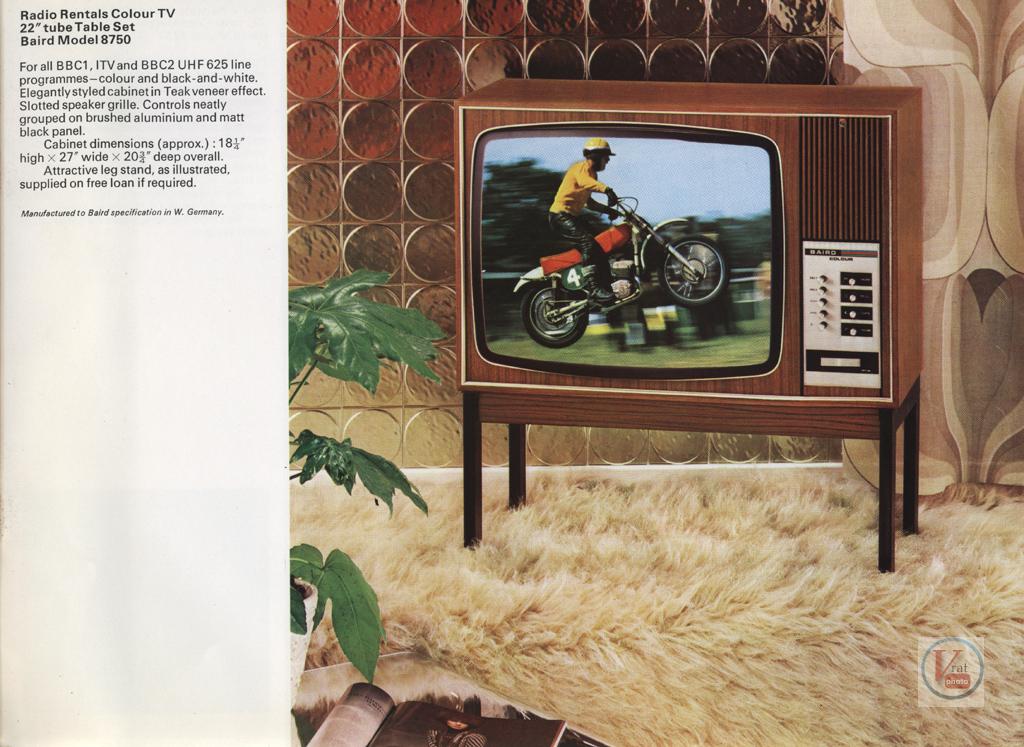 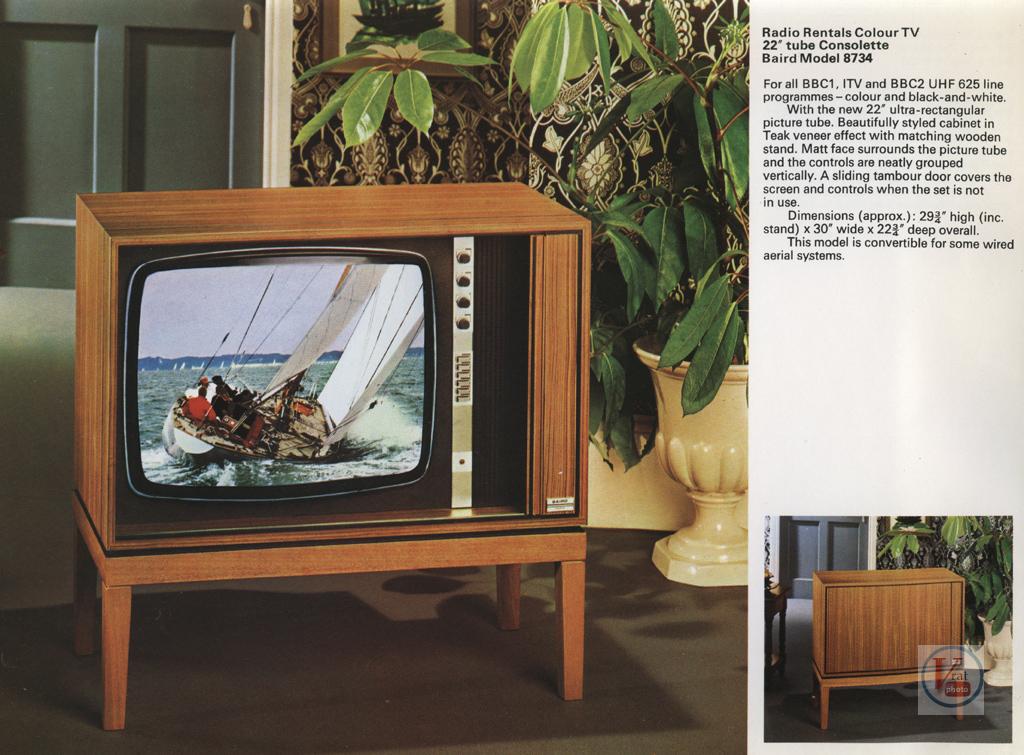 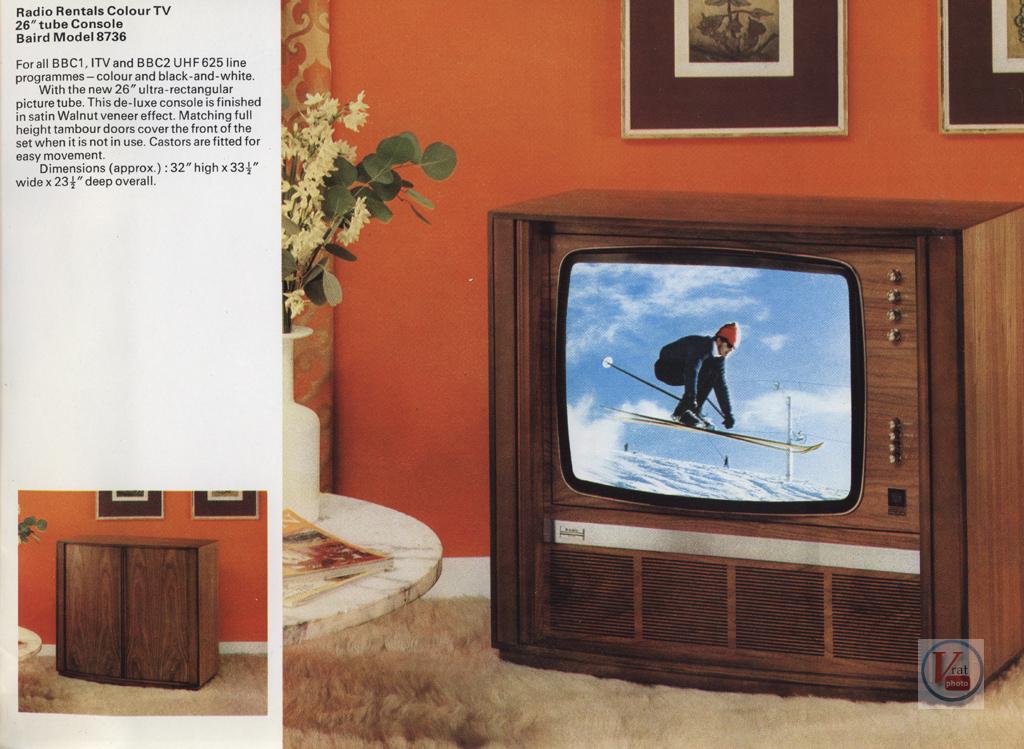 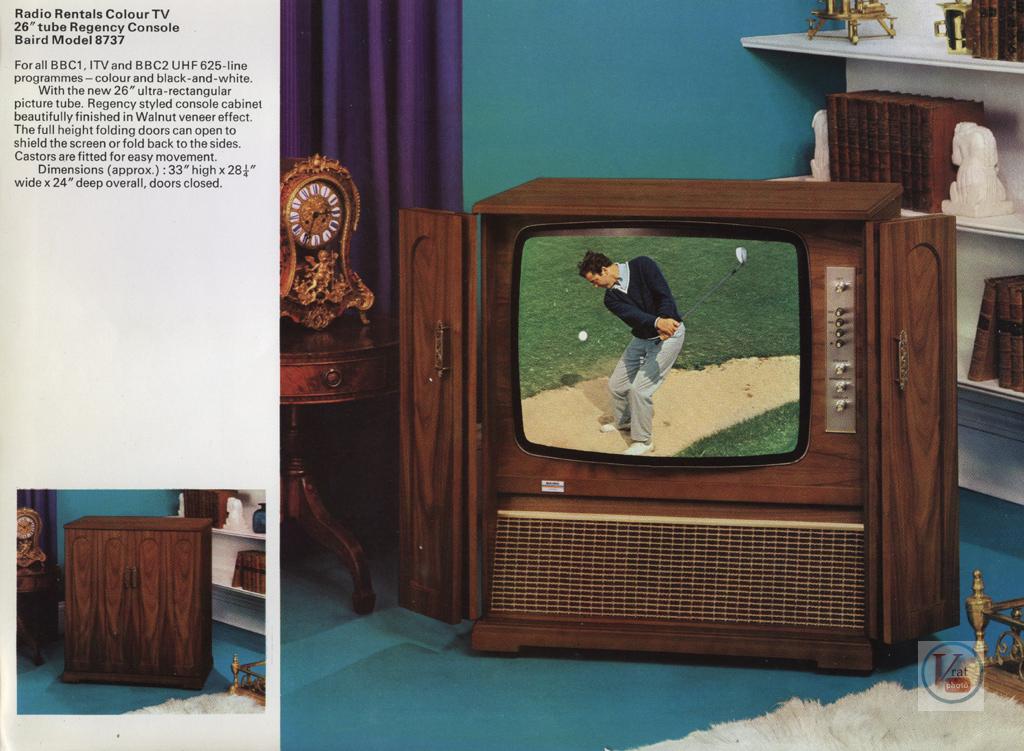 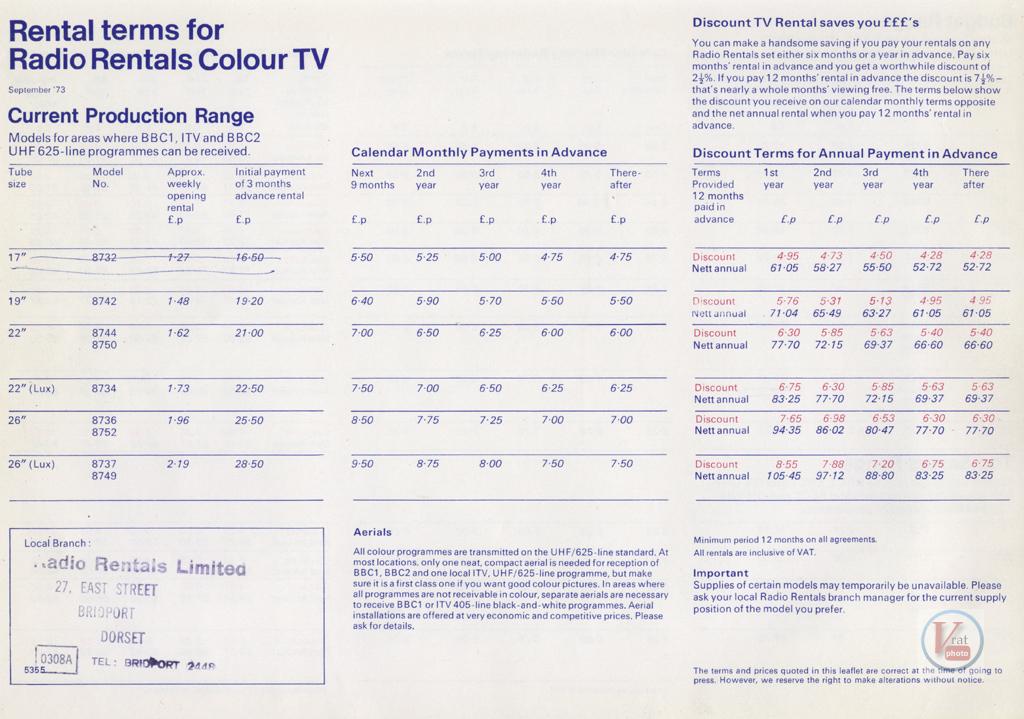 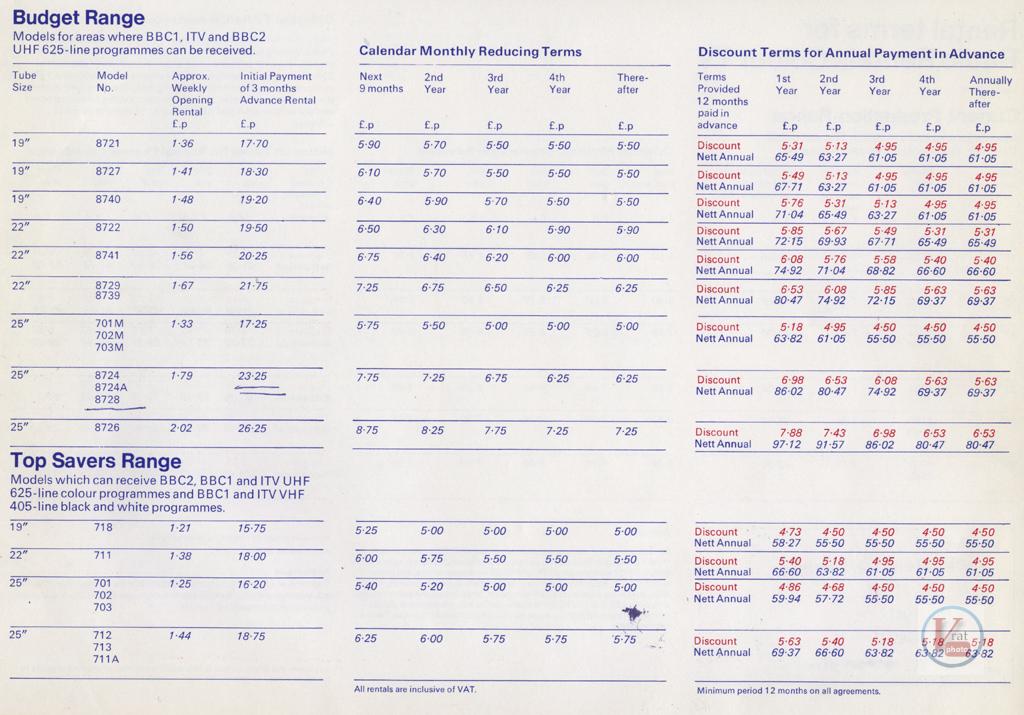 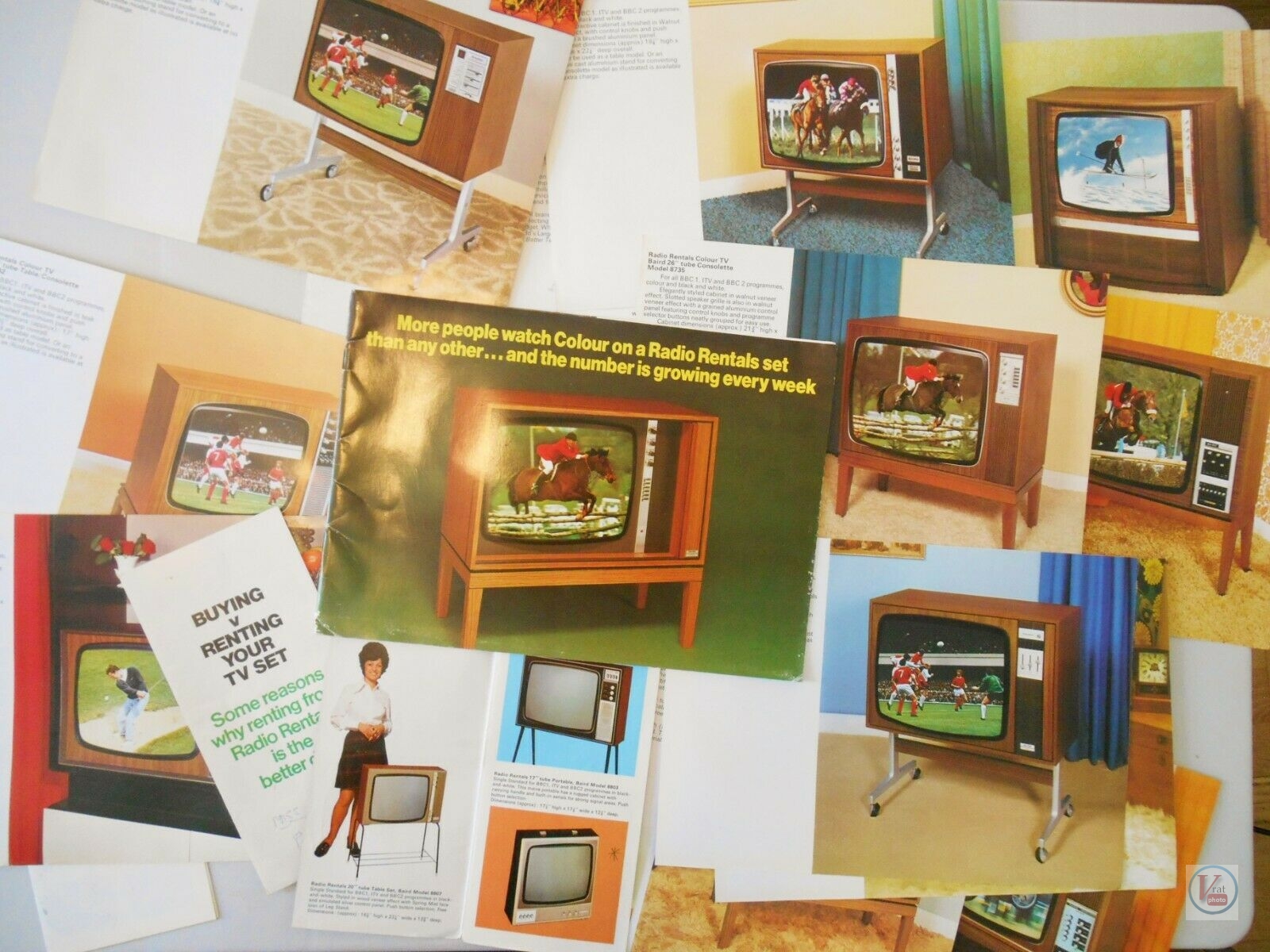 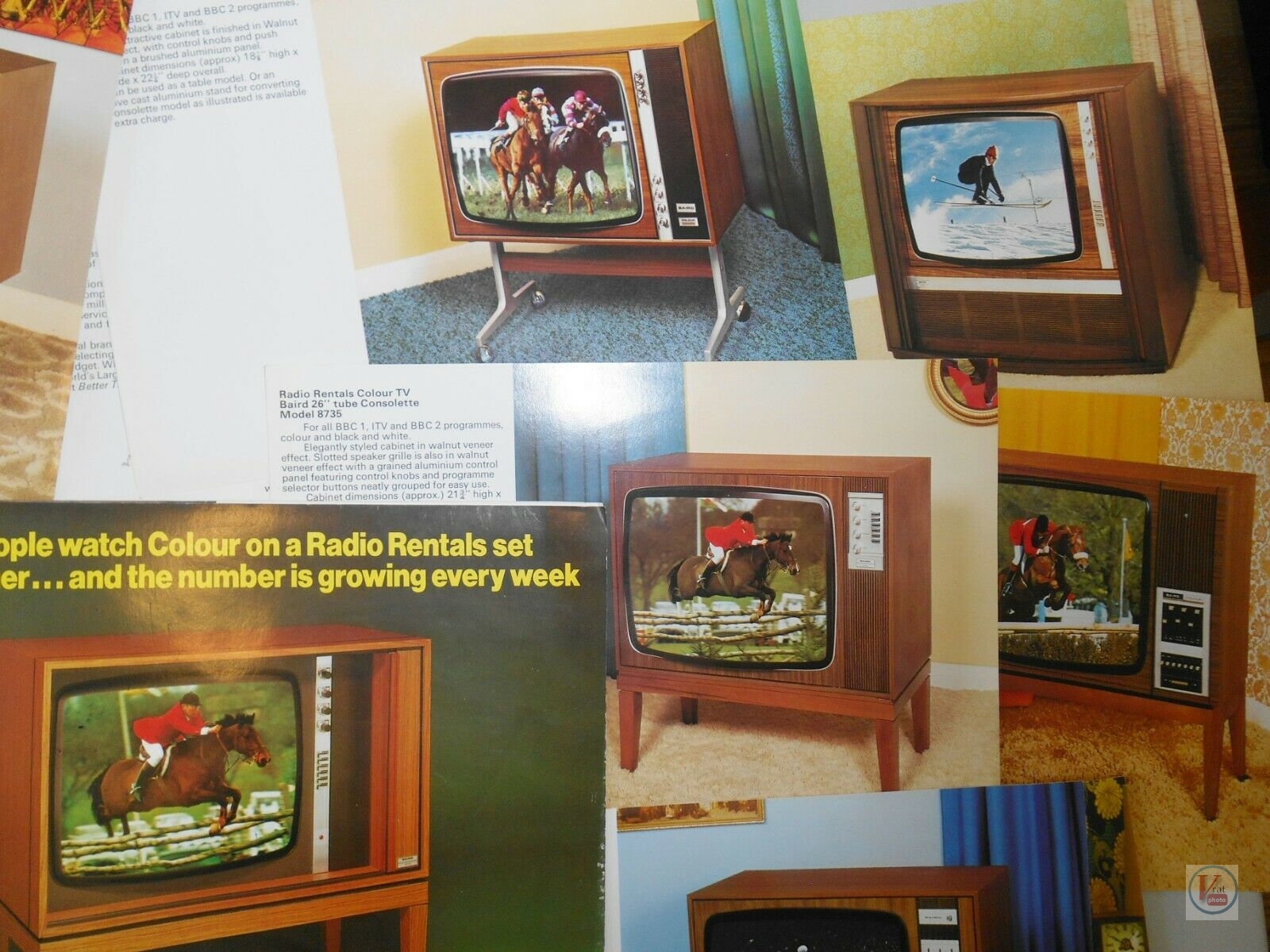 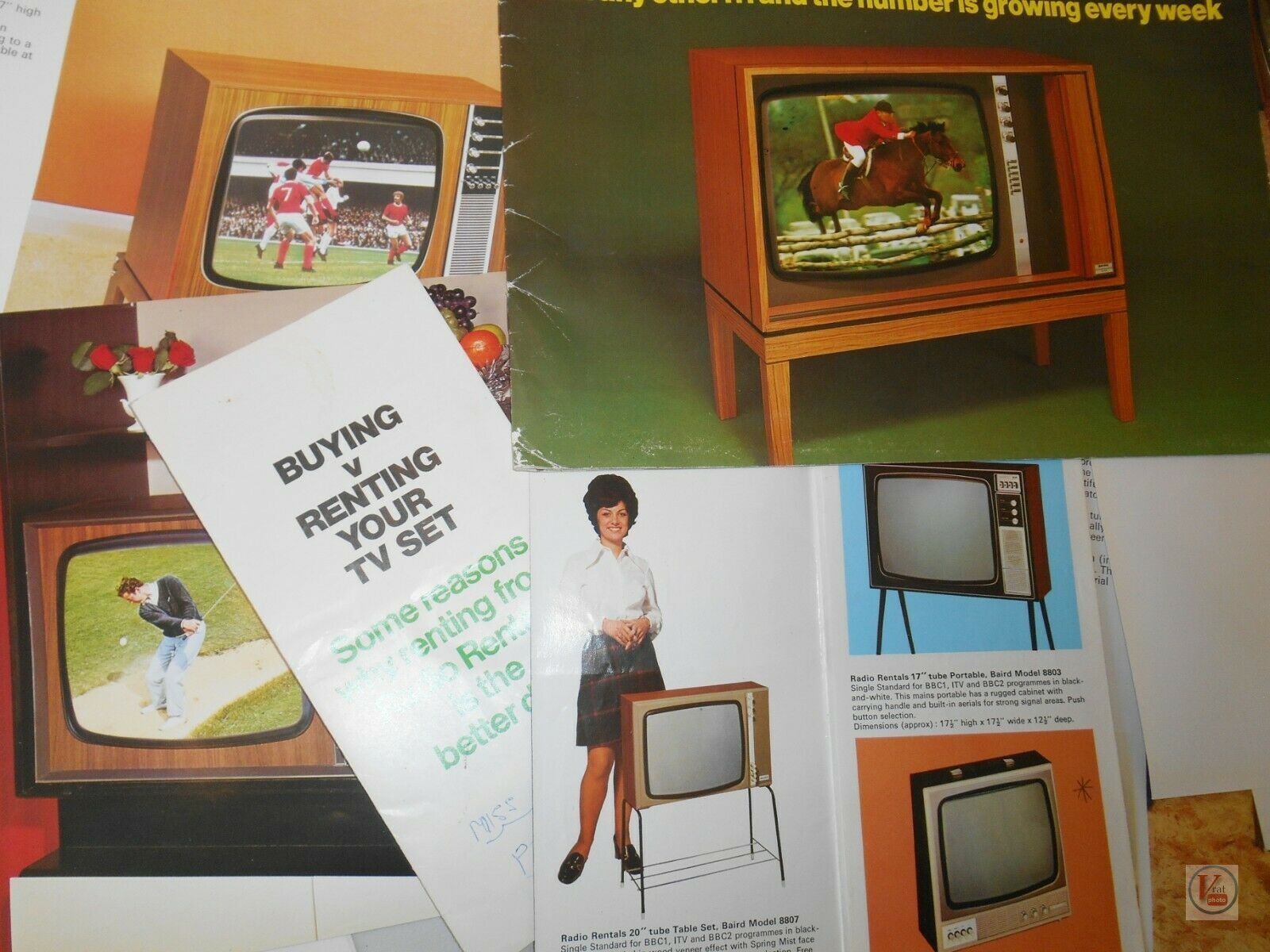 A very aesthetically pleasing group of TVs. We had the 19″ model 8742 and my grandparents opted for the 22″ 8750. I think the larger set had valves, which seems a bit old-fashioned for 1973?

When colour TV sets first launched in 1967 there were some real technical advances going on. Initially in 67 the first sets were known as “Hybrids” these TV’s had a mixture of valve and transistor technology with the valve numbers quite high ( 22) and of course the heat and power consumption associated with thermionics (valves) but they were proven and reliable.

In 1967 Britain and in fact the company Thorn, made the worlds first all transistor television chassis the Thorn 2000, it was a ground breaking set for the time. This chassis made it into the sets the public would know as HMV, Ferguson, Marconiphone and Ultra. You can find some of these sets in my collection and after some minor repairs still work to this very day and produce great pictures.

Some manufacturers continued with the “Hybrid” style sets as late as 1974, although by now they had reduced the valve numbers significantly, but almost all had gone over to fully transistorised in colour. You might be surprised to know as late as 1977 a couple of new B&W sets available to the public still had two valves in the line-output stage as I say it was proven, reliable and more robust and for them at the time cheaper.

So valves in a 1974 colour TV set were not unheard of.

I guess as there was always the tube needing high voltage it made sense to phase the use of valves out gradually. It was very noticeable how much faster the fully transistorised model warmed up though. Good how British technology was leading innovation in this area at least for a while.
I remember leaning over the back to take in the wonderful hot smell the old sets gave off!

Ah! lovely pictures. Brings back so many memories.

I defected from DER to RR in the 80’s as an engineer and remembered how fussy these customers were. They would examine every inch of their new TV for scratches, they had to be immaculate, as if it were theirs. Very amusing.

In my 18 years I met so many different people in this job from Barons to call girls, (not in the same place). I worked with some great guys and girls. What an experience. I wonder where they all are now. I knew nothing about the 8750’s, non Thorn , but on my first day with RR I was sent to see an old user who was complaining vigorously about its picture quality. I secretly agreed with him and went through the set up procedure. No matter how hard I tried he complained and would not let me go. The tube was poor. Then his daughter walked in and told me that her dad was as blind as a bat and gives grief to all the engineers. The TV kept him company. Well, he certainly had me fooled.

I worked as a TVI from 1977 till 1984 at Stockingford unit for the Nuneaton shop,agree about the staff being great and so many happy times,Christmas do,s were always good fun,the customers varied from the best to the dismal ,,but we had to treat them all the same ! with out a doubt the best working days of my life.remember all these sets,the two man lifts often made interesting deliveries as without exception were always the longest distance from the van ha ha .Graham Ellis TVI

I worked as an engineer in Bellshill Lanarkshire. from 1973 to 1985 with a 6 month break in between working for Curry’s. To be honest, it was the most enjoyable period of my working life. Brilliant colleagues, are any of you reading, would love to hear from you. The customer’s were very ‘diverse’ and some were entertaining.

I liked the old analogue TV chassis Thorn 3000/3500. 8000 series. 9000 etc. Not forgetting the old Baird 700 series and model 705 which is pictured at header of website which had the GEC dual standard colour chassis. I still work as a field engineer supporting analytical instruments. Perhaps better paid but not anywhere near as pleasant as RR.

I worked with you at Bellshill and later Dalmarnock, great times. Remember that 718 you lovingly restored then Alex and I Destroyed in mins? Sorry.

Give me a bell, we’ll get a pint

Great read thanks. See my comments at the foot of the article

I worked at Radio Rentals in the Birmingham area from March 1971 until March 1982.They were great days and I loved the job. I ended up working on the broadcast transmission side of the business at BT and then to a broacast transmission provider. So in just over forty years I went fom the receiver end of the TV business to the transmitter and the ‘PAL’ system cartainly served me welluntil retirement.
It is great to see the brochure with all those TV’s I used to work on.

Hi Steve my late father Robert “Bob” Pilsworth worked for Radio Rentals in Birmingham too. He also finished in 1982. He sadley died when i was young but the little i have been told i think he was based at Castle Vale with colleagues called Terry & Ken (possibly). Not sure if this was a shop or repair depot. If you Know & remember him i would be grateful of any memories you have. thanks in advance.
Andrew

I can remember my parents having the Baird 8734 22 inch colour television as one of the ” good as new colour” reconditioned Radio Rentals sets in the early eighties. While it was an attractive set with its cabinet and brushed aluminium control panel, by 1983 it was well past its best and needed a visit from an engineer at least once a month. It managed to limp on for two years until the tube blew and it was uneconomical to repair, so we decided to splash out and buy a new JVC set from the Co Op with a very eighties anti glare screen, flat screen and wood sides. Amazing now, when televisions are thrown away when they develop a problem and no one seriously would want to rent an elderly television, that a large part of the population rented second hand televisions in the eighties and companies like Radio Rentals had shops and workshops in almost every town.

Hi. I’ve got a non-technical question on the history of Radio Rentals (UK). I’m trying to determine the location where this photo was taken:
https://www.flickr.com/photos/trainsandstuff/40839148002/
Does anyone recognise the Radio Rentals shop in the background?