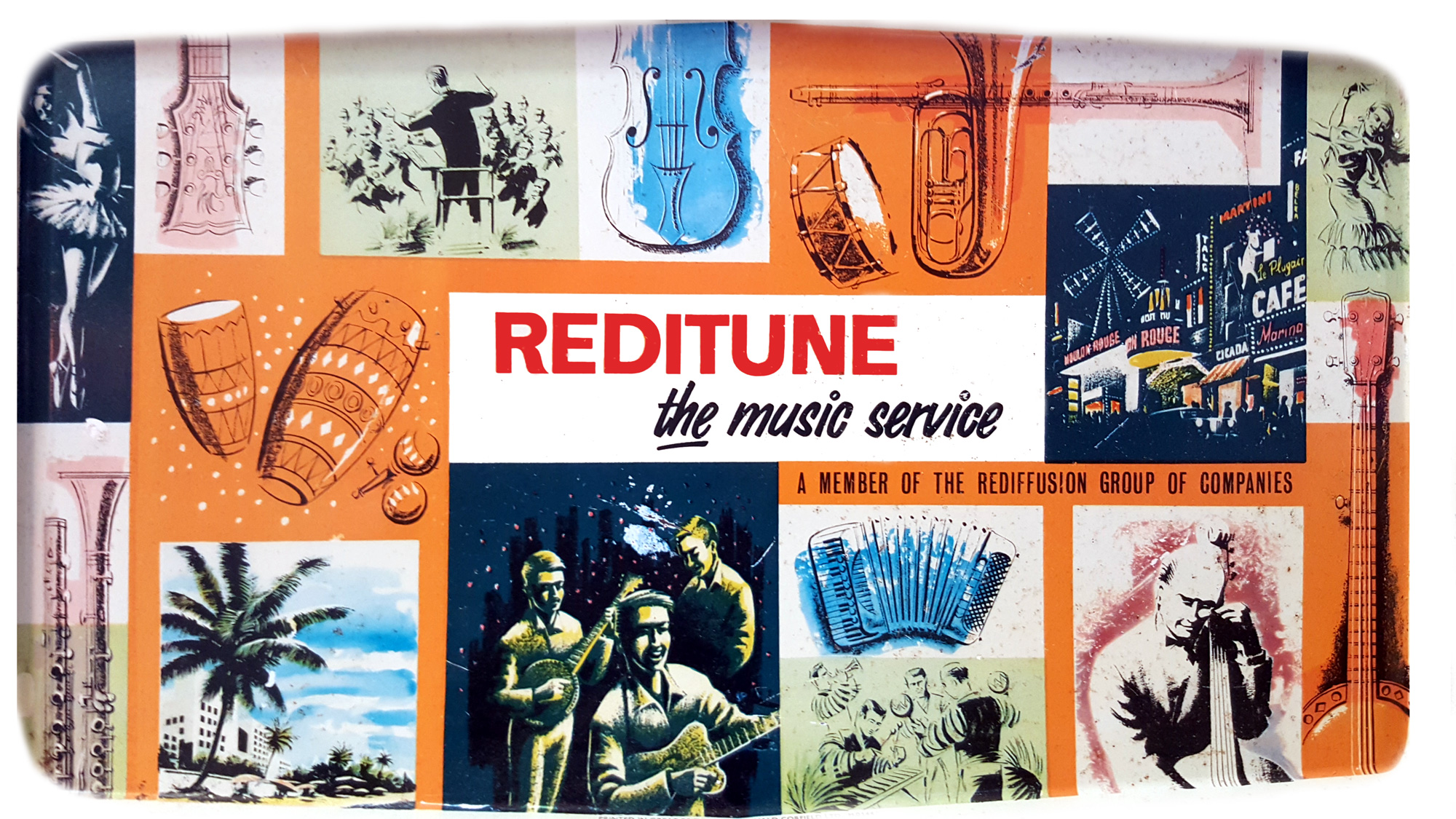 Reditune was founded by Rediffusion in the 1950s supplying a background music service for commercial and industrial applications.  Established in the United Kingdom, Reditune operation also extended to overseas Rediffusion companies and, where no Rediffusion company existed, franchise agents were appointed.  The first of these was in Belgium in 1961, and eventually Reditune operated  in seventy countries with a combined subscribership of more than 35,000.  Reditune became the largest world-wide background music operator outside of the United States. 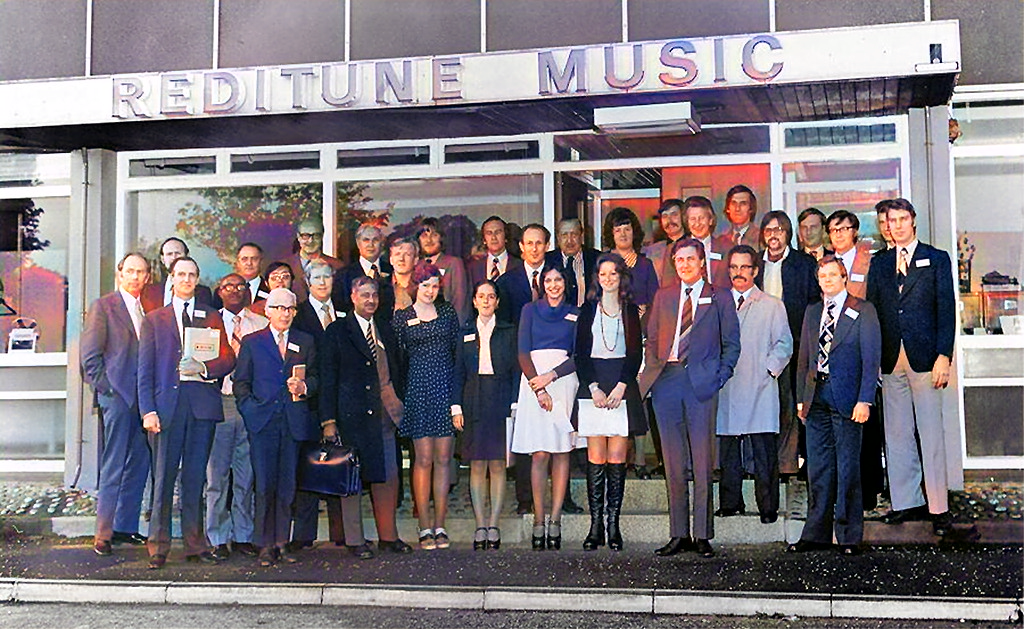 The music tracks were recorded at the Music Department of Reditune, but in 1969 this department was detached from Reditune and became the nucleus of a new company, Rediffusion International Music Ltd. providing recorded material from it’s factory in South Wales.

The original cartridge player was the TP1 produced by Rediffusion’s engineering department TeleVision Research based in Jersey, Channel Islands.  The TP.80 become the mainstay Reditune playback machine, which I have below and also the TP48A, which I cannot find much info about, but I think it’s safe to just say it came after the TP1 and before the TP80.

TP-1 Used a Möbius loop tape that looks like a standard NAB B/C size cart, but the head spacing is different, so not compatible. The pinch roller rises up through a hole in the bottom of the tape cartridge, just like a NAB. Speed 3.75ips, single track.

TP-48 The cartridge is the same size as TP1, but it has an integral pinch roller. Speed 1 7/8 ips and a head that selects one of 4tracks by lifting the head (like an 8-track domestic cart).

TP-48A MKII As above, tape speed 1 7/8 ips – this allowed the cartridge to be halved in depth from TP1. 10W output 4-hours continuous music.

TP-Mini For smaller establishments which previously could not justify the price TP1 or TP48. The TP-Mini is sold outright in kit form and includes a playback machine, two loudspeakers, all connections and instructions for do-it-yourself installation.

TP-80 As above but more powerful amp (100v line) and cart area enclosed.

TP-80S As above but stereo

RM3 As above but CD version 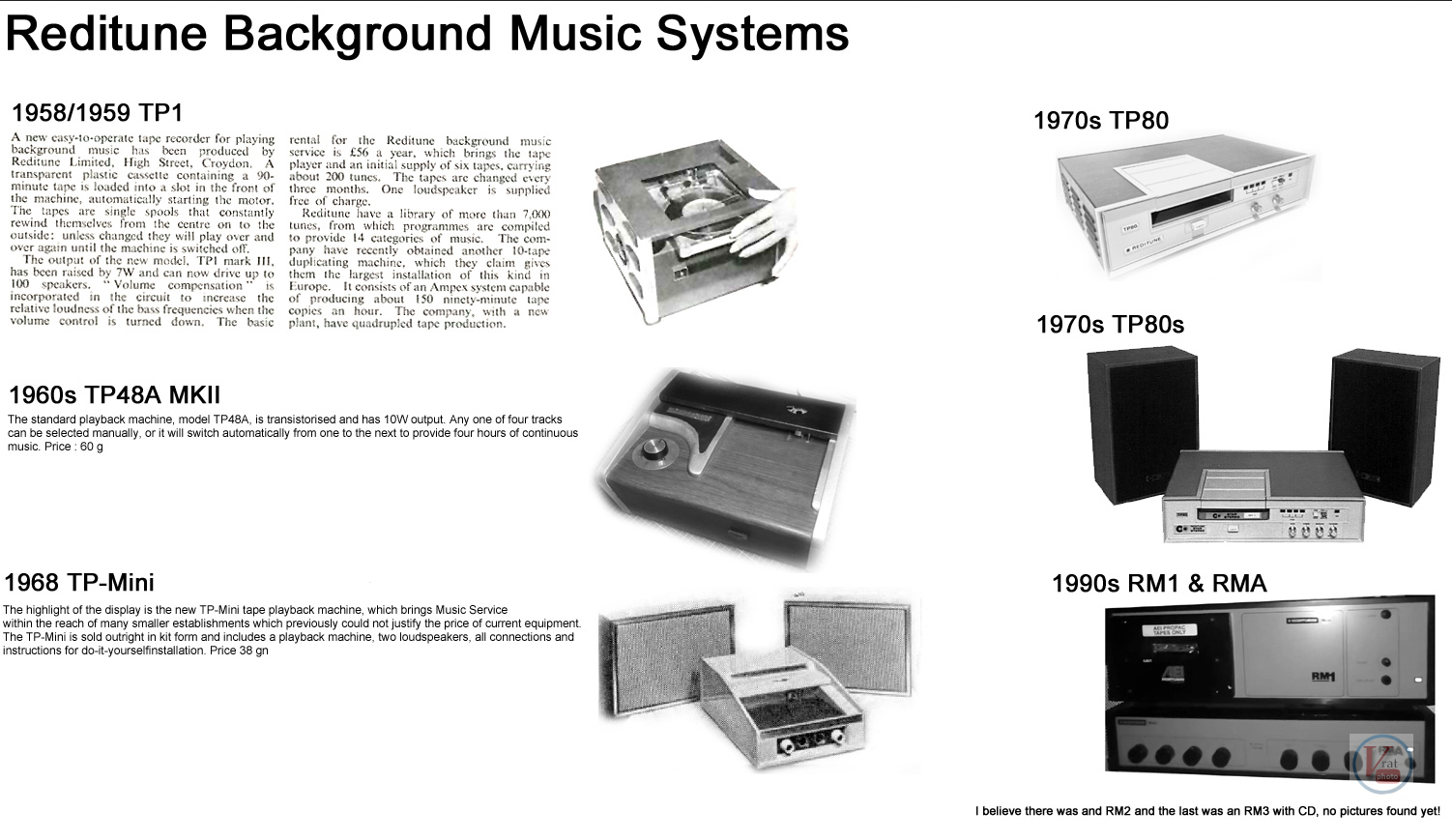 Players in my collection

This player, despite looking in remarkable condition, the looks should not deceive. The special 240V direct drive, 1400RPM motor was o/c and could not be rewound, the cost making it BER. Another direct drive motor, of the correct speed, was found. However, although the body was the right diameter it was a little deeper, and the spindle too thick but quite long. This was not an unsurmountable problem, a local engineering company turned the spindle down to the correct 5 mm and the spindle length cut, taking into account the additional body depth. It fitted and worked. Again, more problems were then found in other parts of the circuit, this machine is a work in progress. 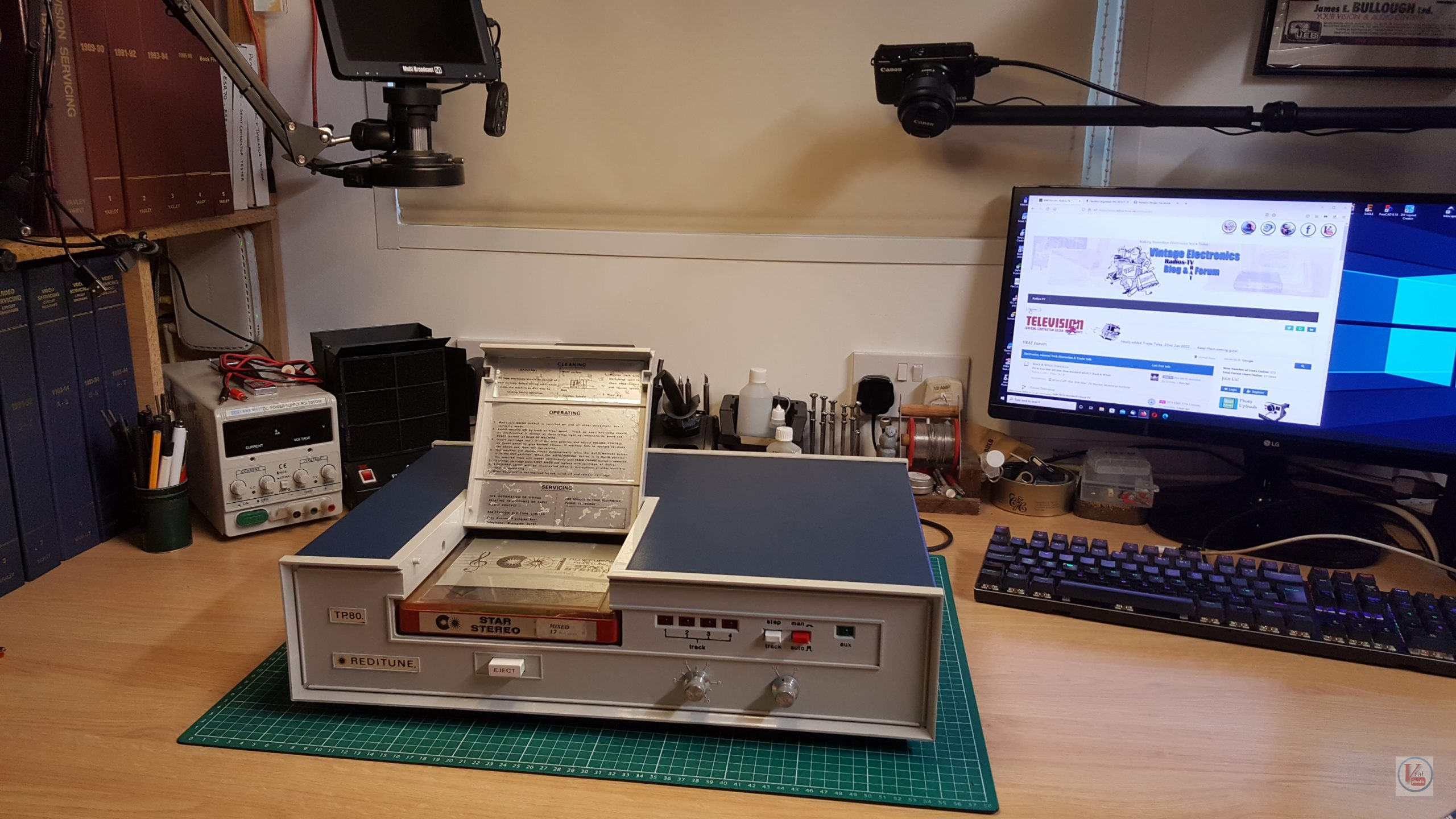 I think I have a new rightful owner of the title “swampy!”

I’ve unearthed this thing, and when I say unearthed I’m speaking metaphorically, but it certainly looks like it was an archaeological find. This came from a farm, it is complete, with power lead and original, small, round-pin plug. Plus a bonus a lot of tapes, though these are also in equally awful condition.

There is not a lot of info out there about the TP48, my assumption is it came after the TP1 which was released around 1957/8 and before the TP80 which was the most popular in the 70s and 80s. I’m guessing early to mid 1960s. I suppose you could say out of the frying pan with the TP80 and into the fire with this TP48A, and you’d not be wrong.

Other than being complete, there’s not a lot to sort out, but there are some positives. I’ll list some initial findings, seized capstan, seized eject, solenoid is OK, Track select OK, head positioning OK, volume pot rotates, motor rotates, belt perished, fuses OK.

This will be a long project, It’s going to require a full strip down. Enough waffle, I’ll let the pictures speak far better than I.

There are some subtle presentation differences, to the TP48A, notably the top rear plate. The TP48A top plate is covered in leatherette, the TP48 continues the fake wood effect. This version is the slightly earlier model, it’s just the basic TP48, no automatic change, thus no solenoid. It plays 1 track for an hour, then will repeat. You can of course at that point manually change track, thus it still gives, like the TP48A, a maximum of 4-hours playback.

Being earlier, there are zero lockfits to be found in what I assume is the little preamp board under the top plate. You can also see the TP48, has a fair less amount of components below decks. The transformer looks a lot healthier than the TP48A.

As you can see, this unit is in much better condition, and that also goes for the heads. The original belt (see below) was intact, but had turned solid with lots of fractures. Eager to see what state it was in electrically, I cleaned the heads, oiled the motor and fitted a new belt, the one that I had made up from a cut length and glued.

Upon power up, everything worked as expected, motor runs nice and silent, tape transport functions correctly and track selection works fine. The only problem, the volume has to be up at max and I can then just hear it. Whereas Swampy at max volume, is unbearably loud, looks like I have an amplification fault. Finding the cause, that’s my next task. Time to swot up on the likely causation of low volume in an amplifier. 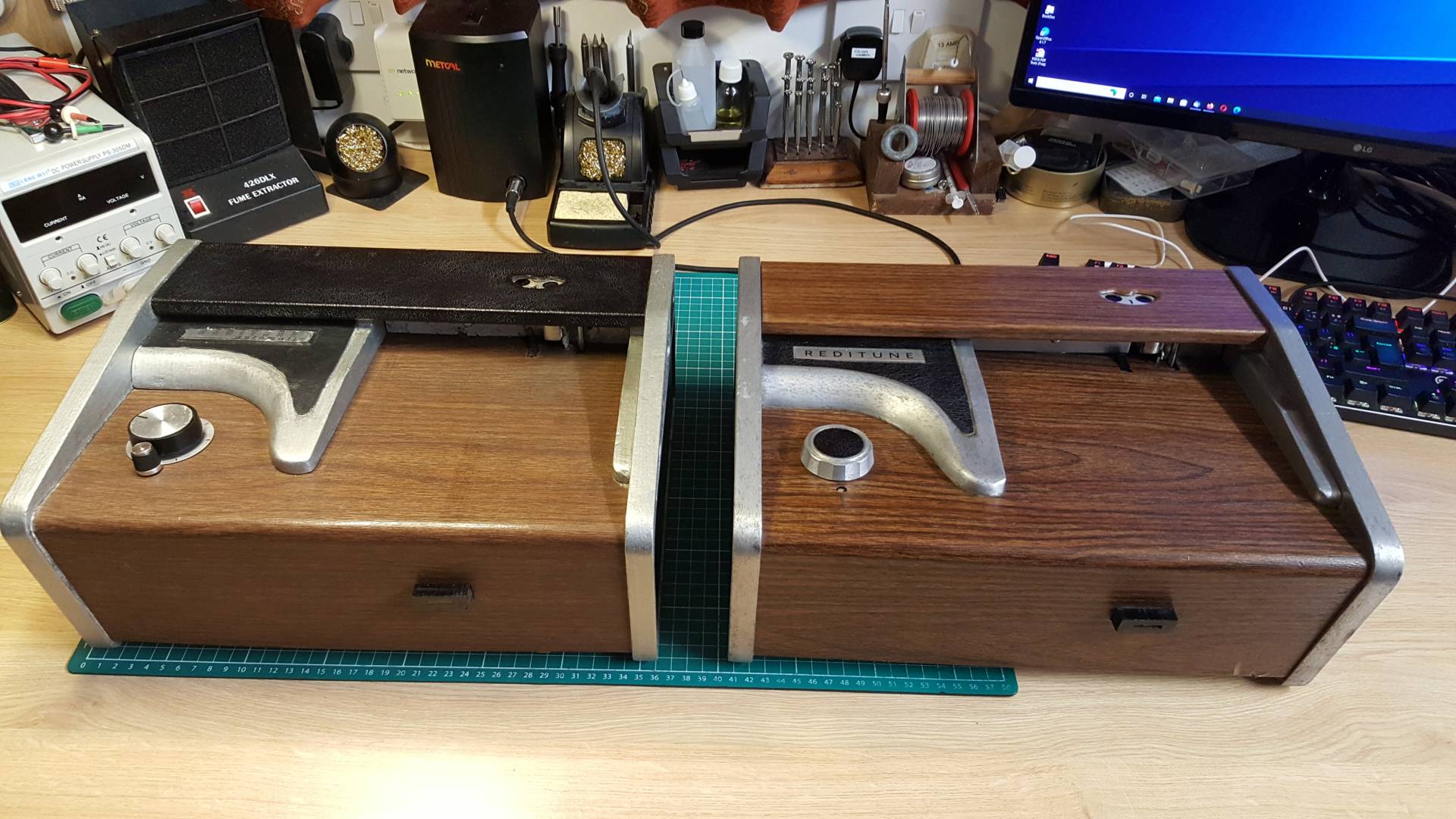 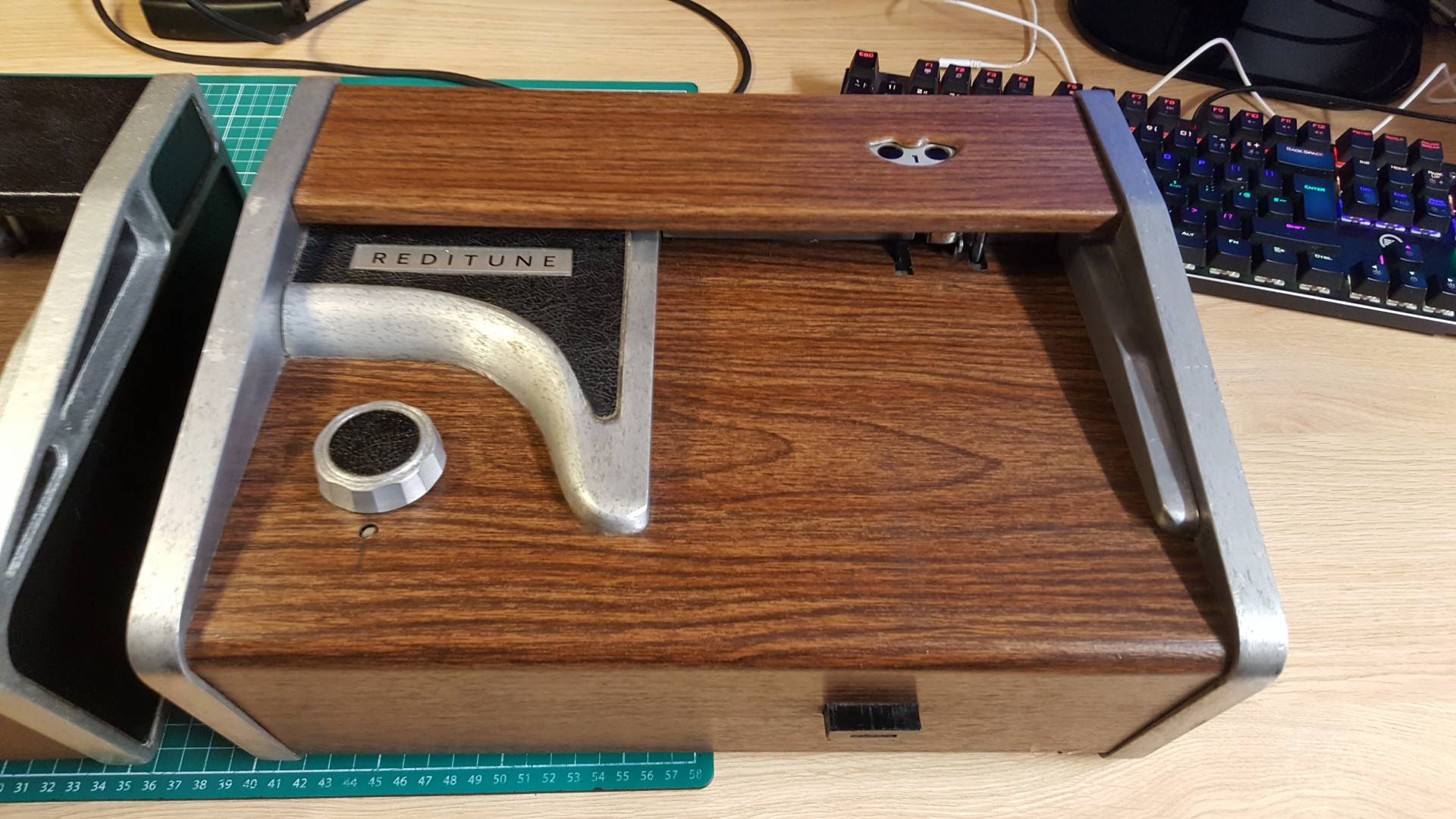 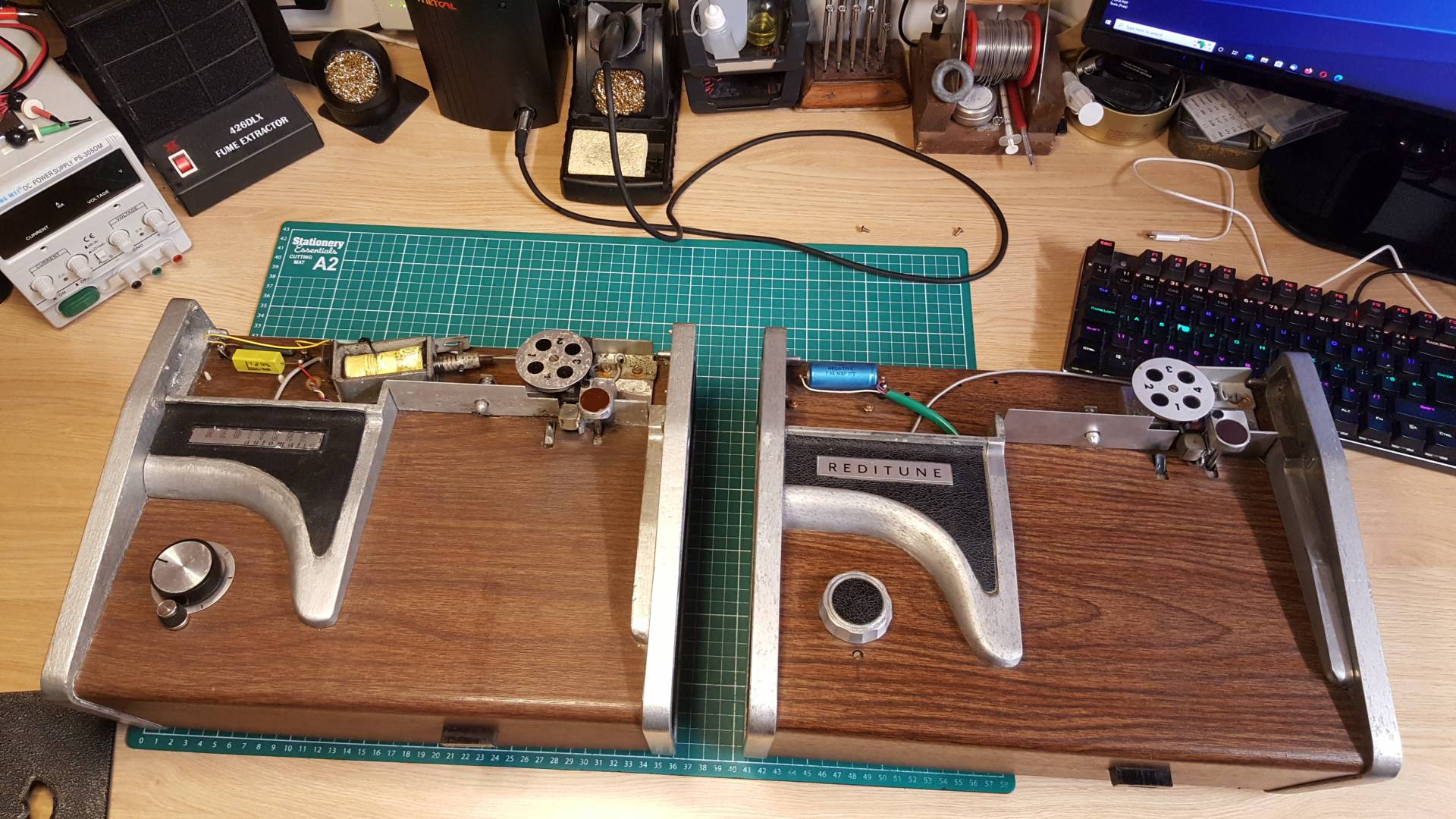 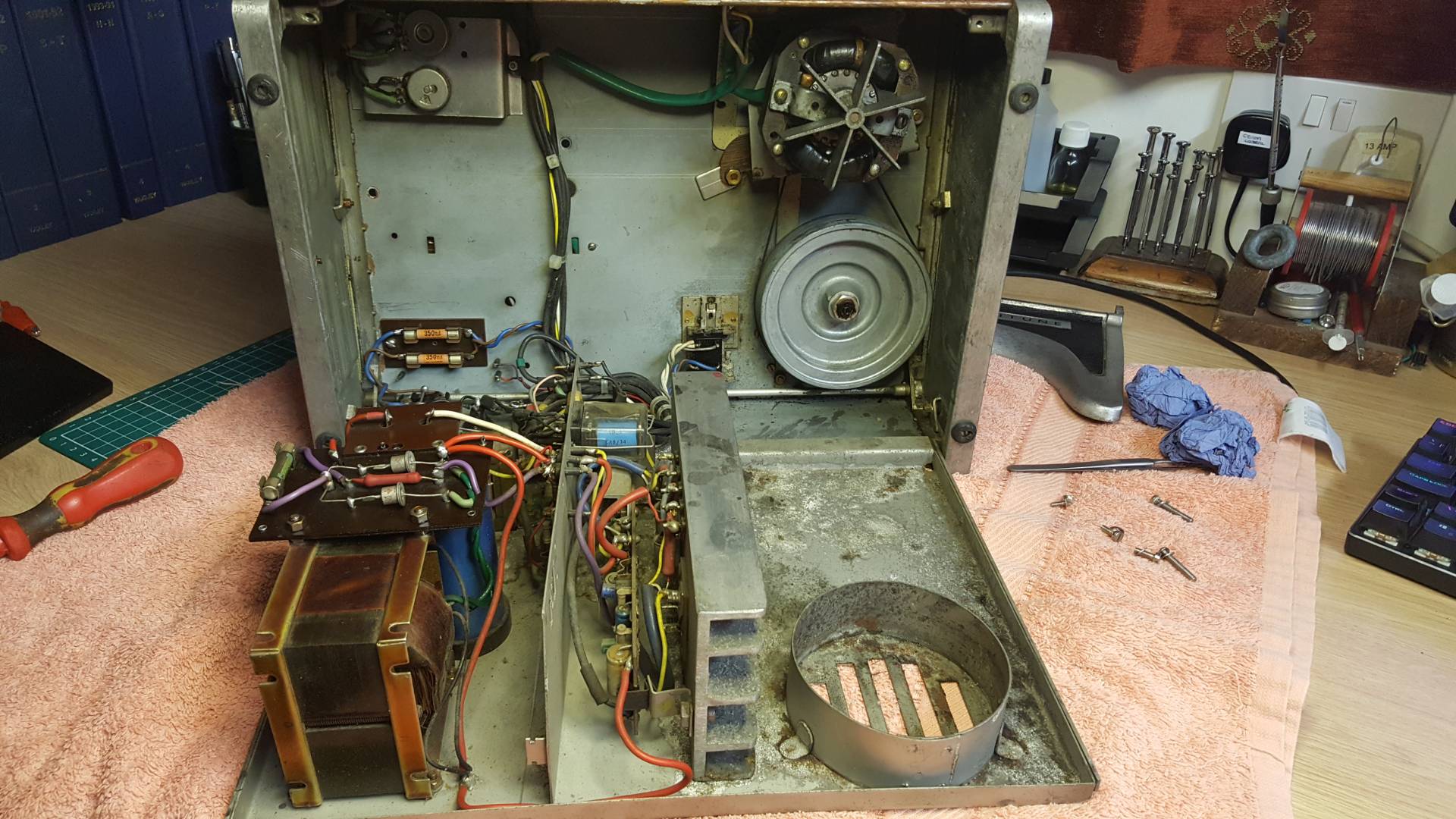 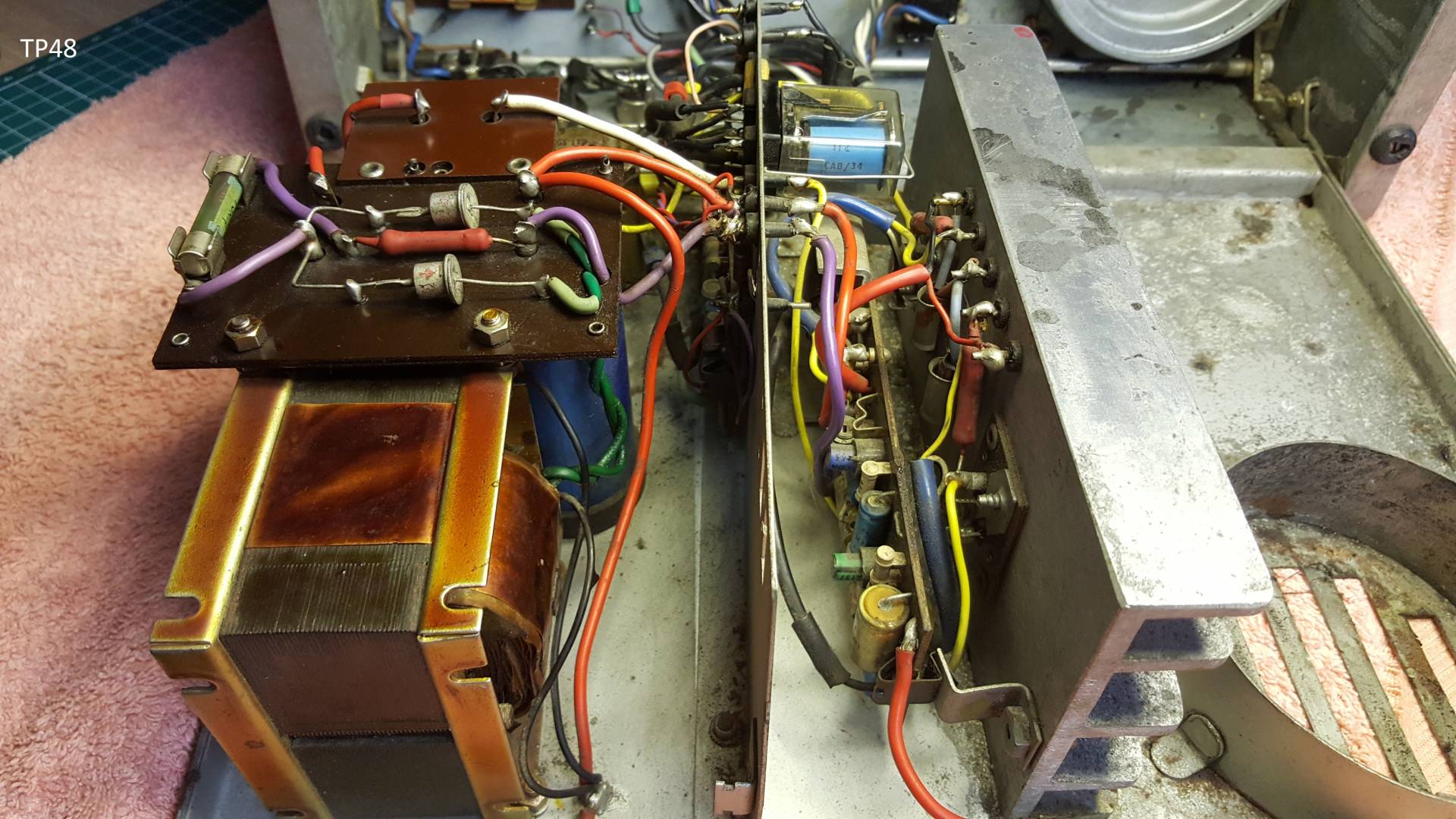 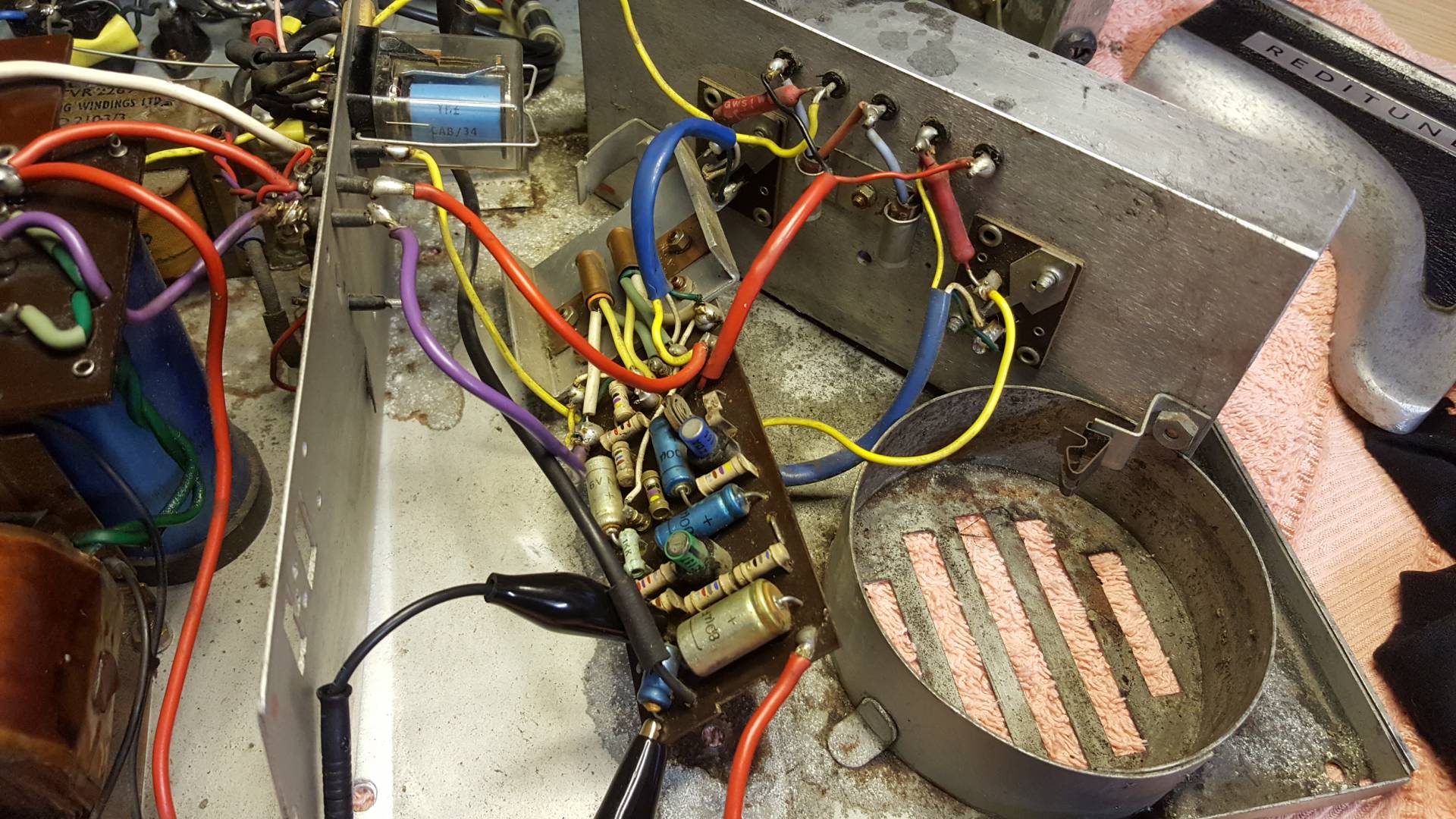 Perhaps readers of the previous TP48A thread may recall (swampy), the unit had been poorly stored, also apparent was the state of the small Philips blue electrolytics, they were pretty much all shot.

This new(old) TP48 has clearly been more looked after, and even though a few years earlier than swampy, it still has a number of these electrolytics. On an initial inspection, they all looked to be in reasonable condition, though that as we know cannot be relied upon.

Dismantling the lower deck to gain access to the various sections of the circuit, I did find a 20uF that had puked and another, a 64uF up top. Checking these two in-circuit, shows the 20uF reads as leaky and high ESR. The 64uF has risen to 261uF.

Time to delve in, I think I’ll try the one connected to the audio head first. 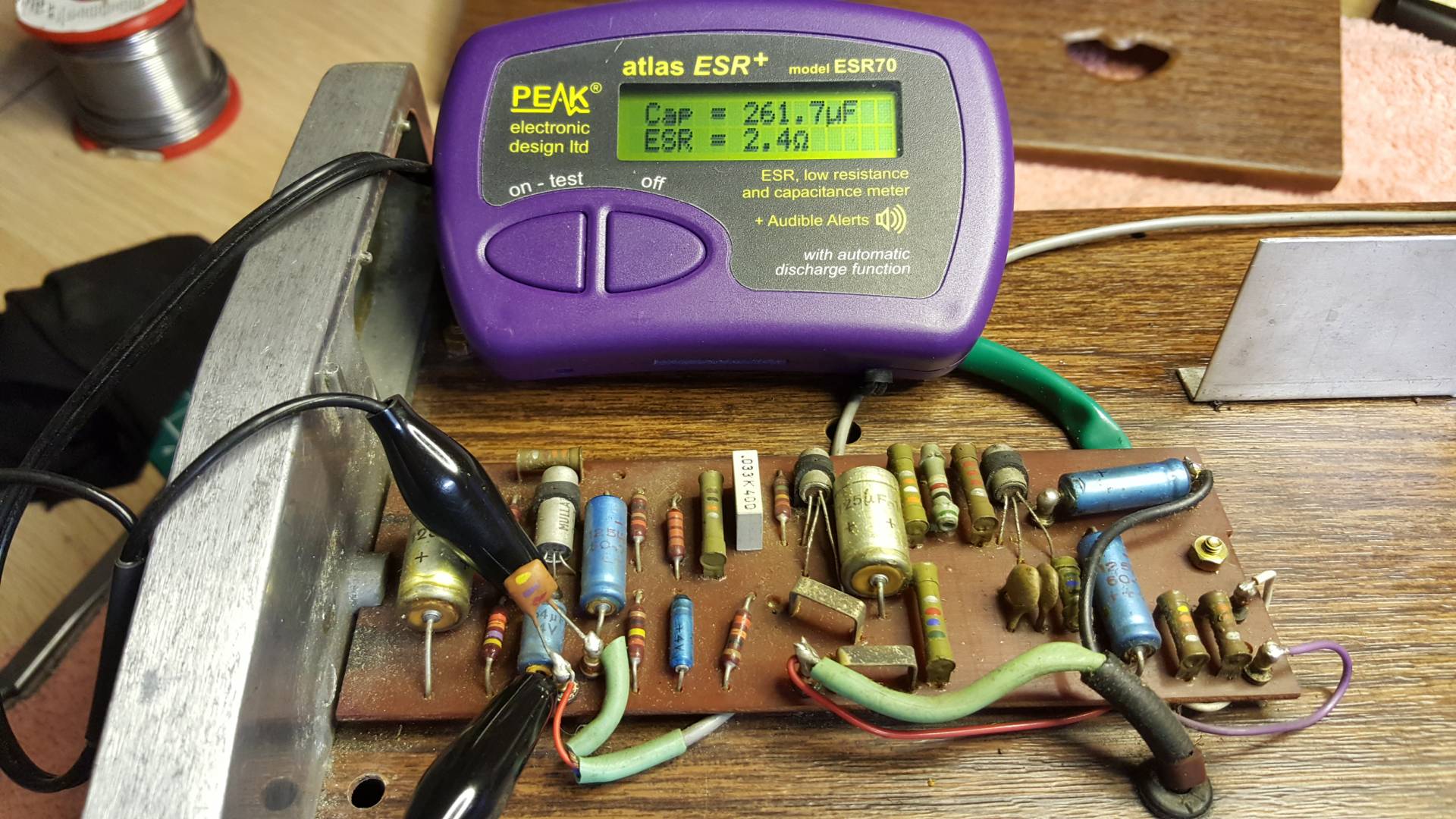 Well that was a simple fix, the extremely low audio was as suspected, a result of the 64uF 25V electro, in the feed from the audio head having risen to 289.2uF.

Replaced with a new 68uF 25V, I now have bags of volume. I’ll leave this one running for the rest of the afternoon and evening to see if anything else develops. The good thing on this one is the tone works, as you can probably hear from the demo, more bass.

It’s interesting to see both machines were made in Jersey.

That’s because Rediffusion’s engineering department TeleVision Research was based in Jersey, Channel Islands.