Well, long time no benchy, the last item serviced was the 3000 PSU 3-part youtube video. I will in due course be tackling an early colour and yet another N1500, the one with no colour and distorted sound, so watch out for the repair blogs

Nothing in depth or spectacular this time out, just a run of the mill crusty repair blog. This is the first repair blog for the CrustyTV Collection Pages using the cross-site posting, so this article should as if by magic, also appear in the forum. I’m sure those paying attention will already know this but for those that don’t, any posts or comments made either on the blog article or forum topic, will be populated in both.

Anyway, back to the subject matter of this thread. I’ve been after an 8-track player for some considerable time. I had looked at many that crop up from time to time on e-bay. Mostly they’re tat, not very good quality with the likes of Prinzsound et-al. I happened on purchasing a 1973 Ferguson brochure (see here), in that brochure among many other items was Ferguson’s 8-track offering for that year, namely the 3440.

Now I’ve quite a thing for all things Ferguson, in fact my early colour TV collection features no less than seven of their sets from the 2000 right up to the TX10. So seeing this 8-track in the brochure set me on a mission to find one, no matter how long it took.

Little did I know

On the off-chance I thought “go on check e-bay”, well I couldn’t believe it, there was one available. It was listed as not working, badly scratched and with one speaker cable missing. Even better it was Buy-It-Now. Without hesitation the button was clicked and a few days latter the 3440 was in my possession.

I suspect by now you’re wondering what this god awful piece of low-tech, old audio equipment looks like. Well here you go,the brochure extract that caught my eye.

It was Meant to Be

Checking my physical data library revealed I had the manufacturers service data, this and ERT data should be more than enough to assist with servicing. 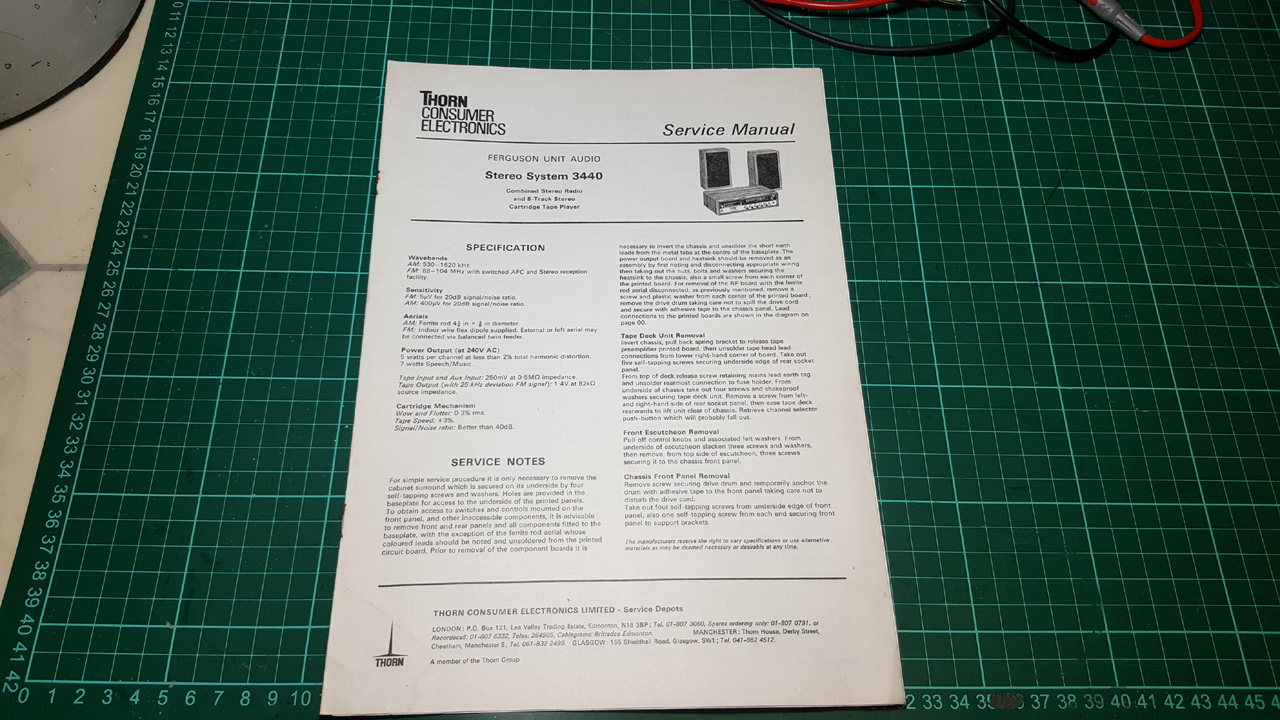 When it arrived it was indeed as described. Badly scratched (I failed to take photos) I set about that first as the player cabinet is just a sheath. Undo four screws beneath and the whole unit slides out leaving the rectangular wooden shell.

I guess it looked dead to the previous owner as all the dial lights were out. Had they pursued it further by selecting MW/FM and connected an aerial, they would have found it pulling in multiple clear stations, nothing wrong with the radio on either band.

Selecting tape and inserting an 8-track cartridge the track indicator lamp lit and music started playing, excellent. Operating the channel button  actuates the solenoid which is working, adjusting the head height to play the alternate tracks. The sound is a bit muffled, probably needs a head-clean.

On to the dial bulbs, there are three, they take 13V from the micro-switch that activates the tape motor. I ordered up some replacement dial bulbs. 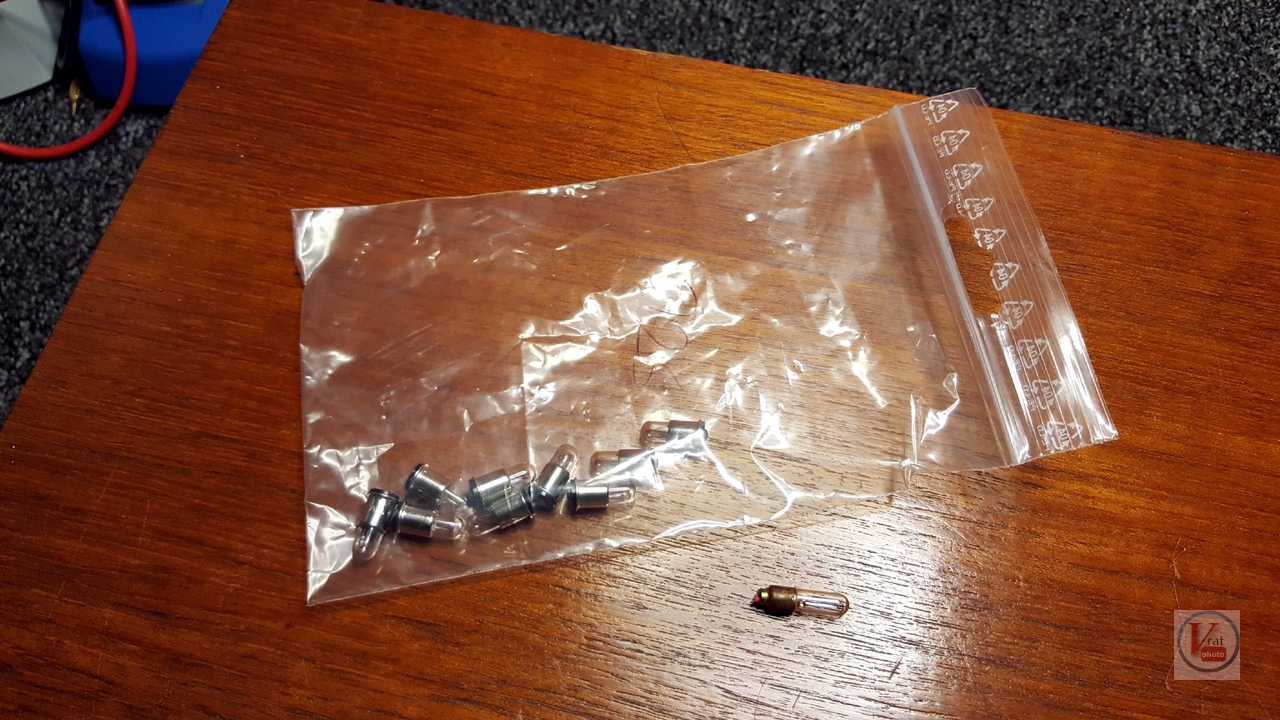 It turned out only one was actually duff, though for the life of me I could not see why under a normal mag lamp. Looking under the bench microscope revealed one filament wire protruding (top filament/post) from its post. It looked connected but is in fact o/c. 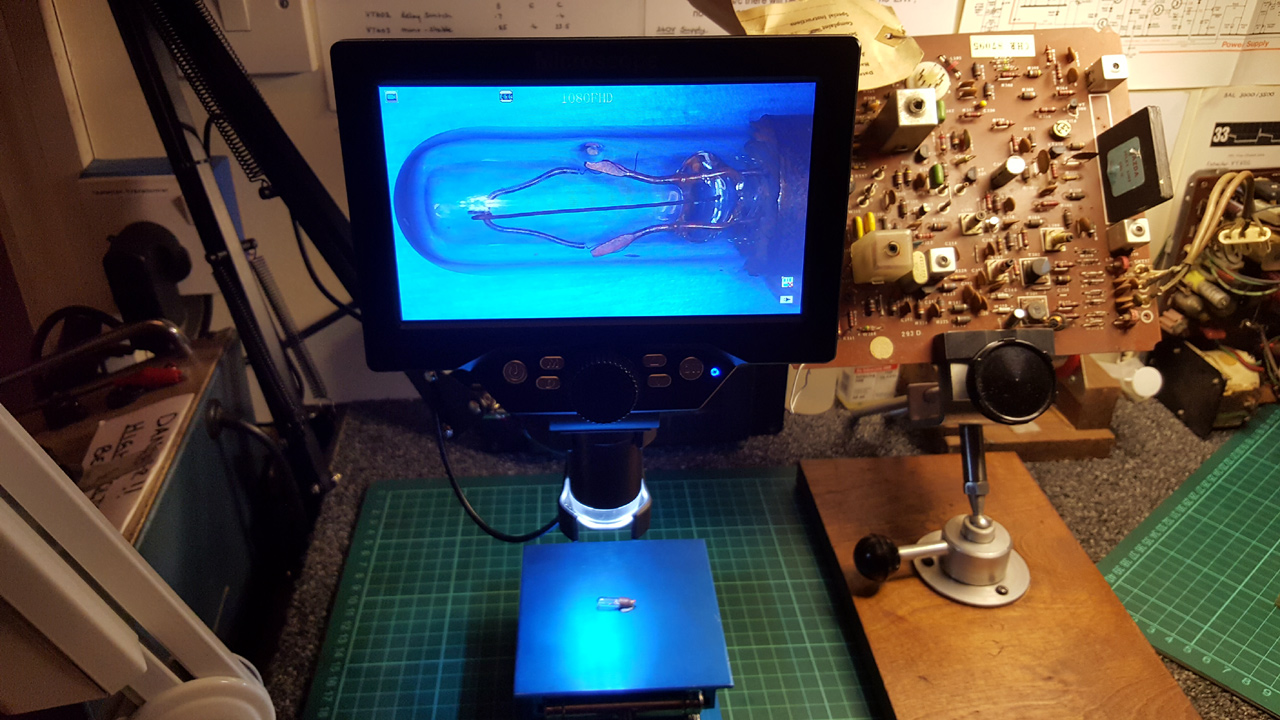 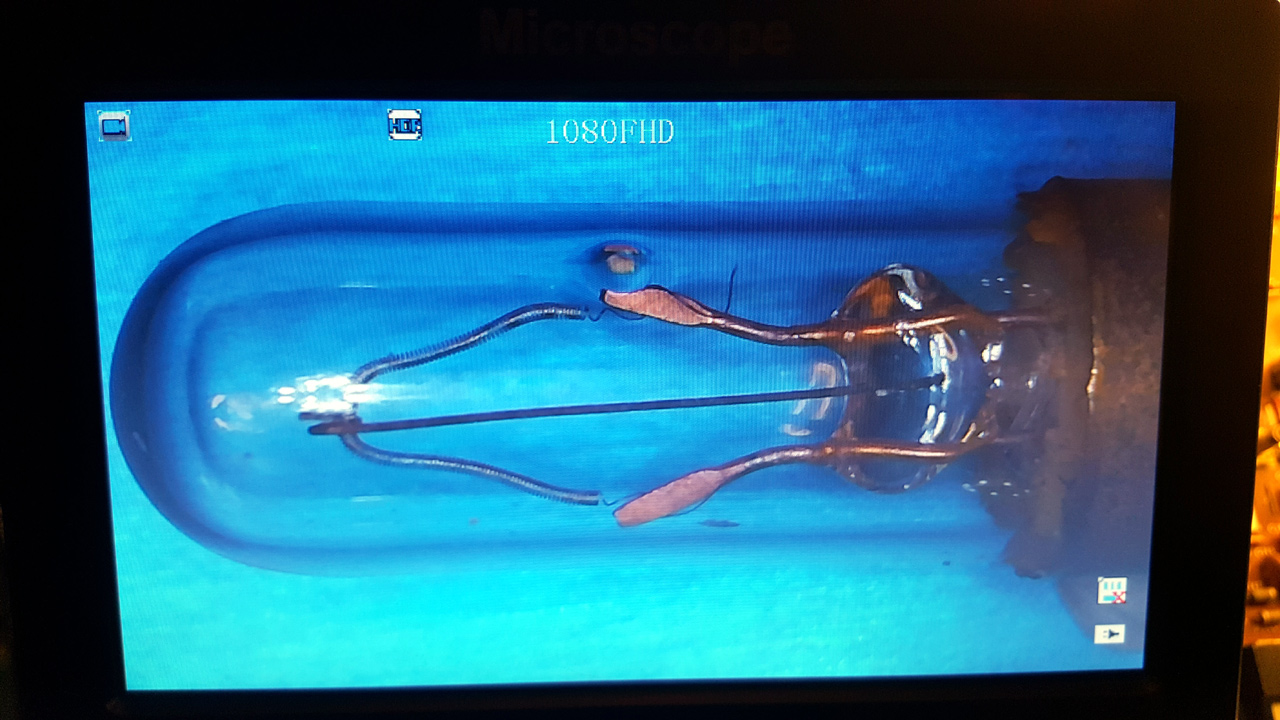 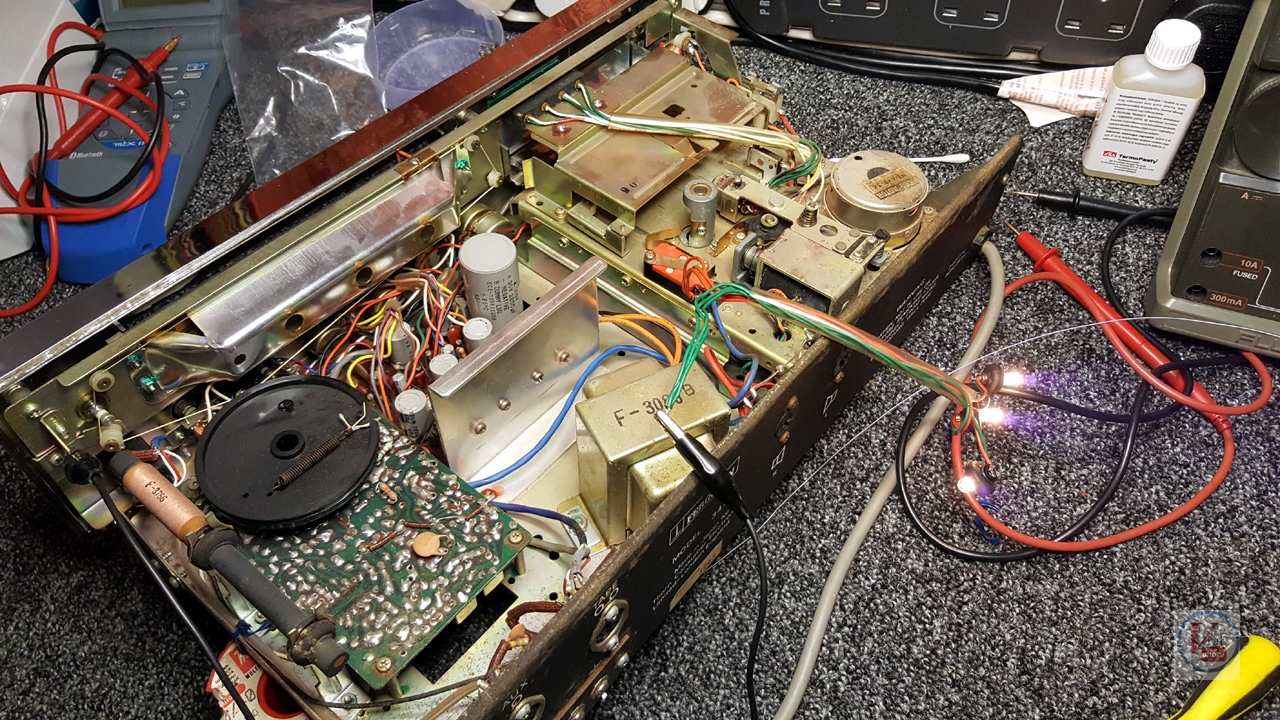 Reinstalled and held in place with Kapton tape. 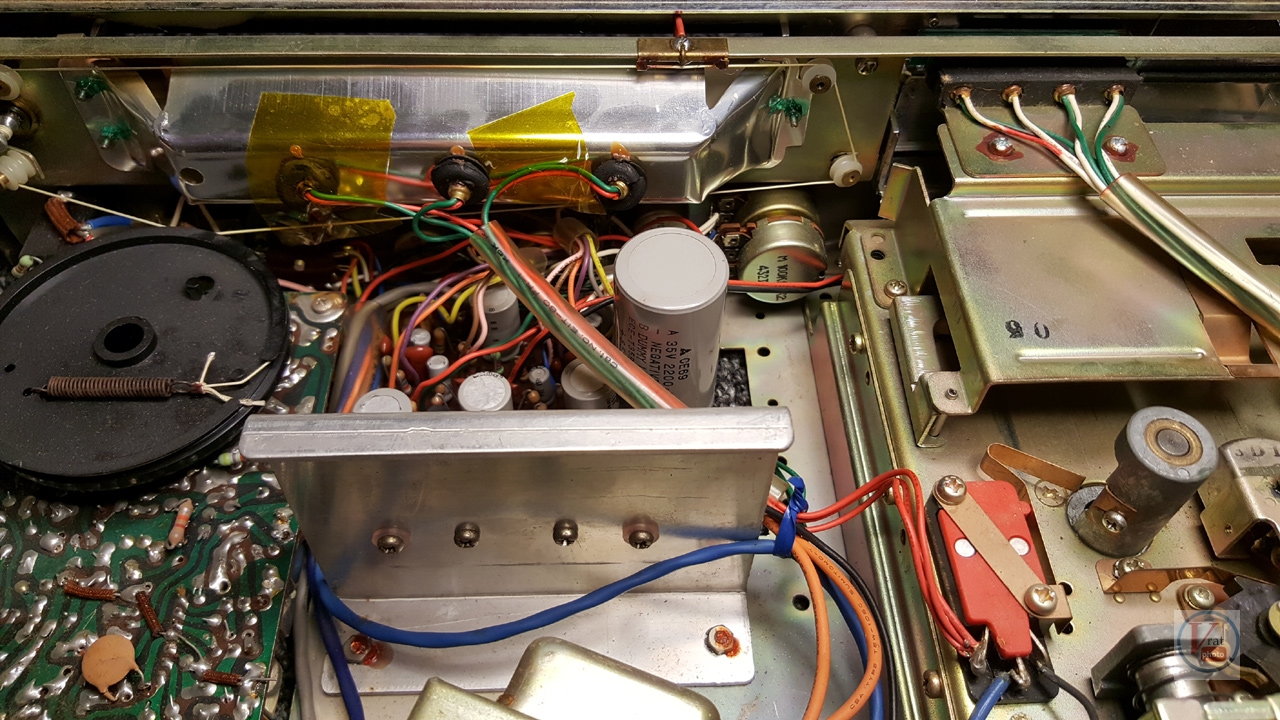 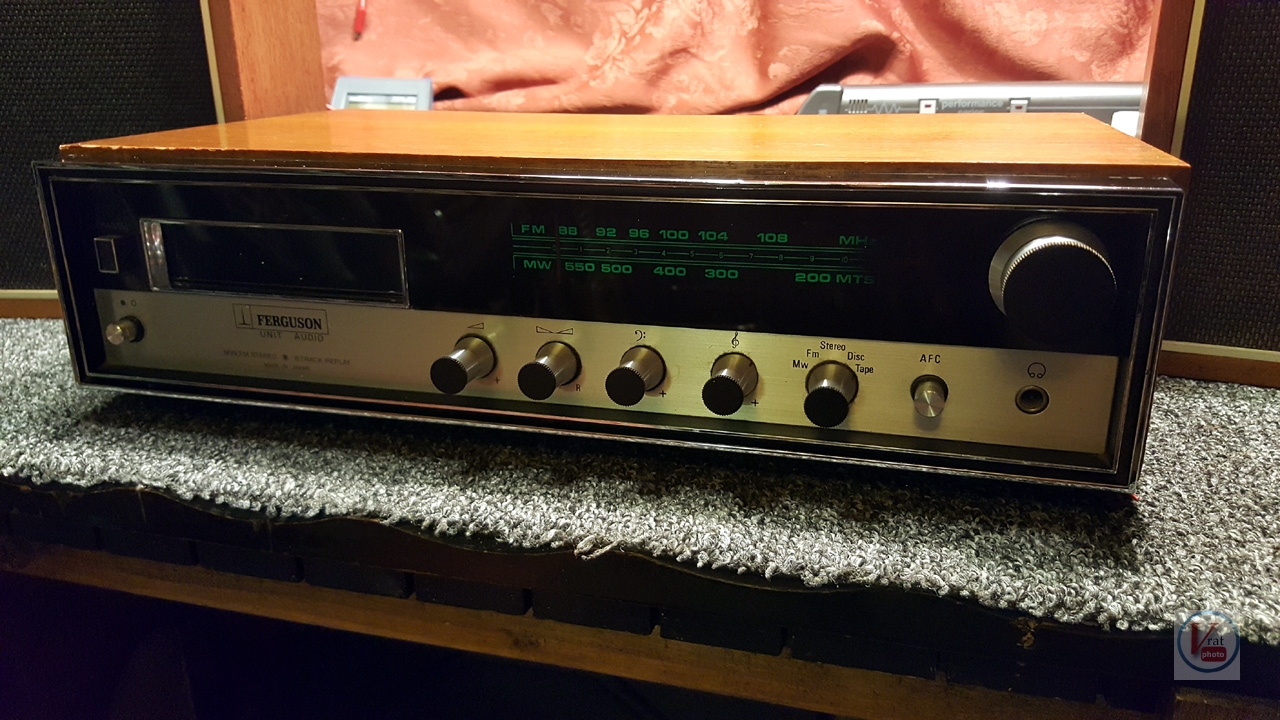 As I mentioned above, pretty much everything is working as expected on the 8-track side, though the sound was a little muffled. Out with the IPA, cotton buds to clean the heads and boy were they filthy. A few cotton buds later no cruddy brown gunge and the head sparkled. Whilst at it the rest of the other mechanical parts were cleaned and lubed. A further test and it sounded a lot brighter, like you’d come up from hearing under water to the freshness of clean audio in the open air. 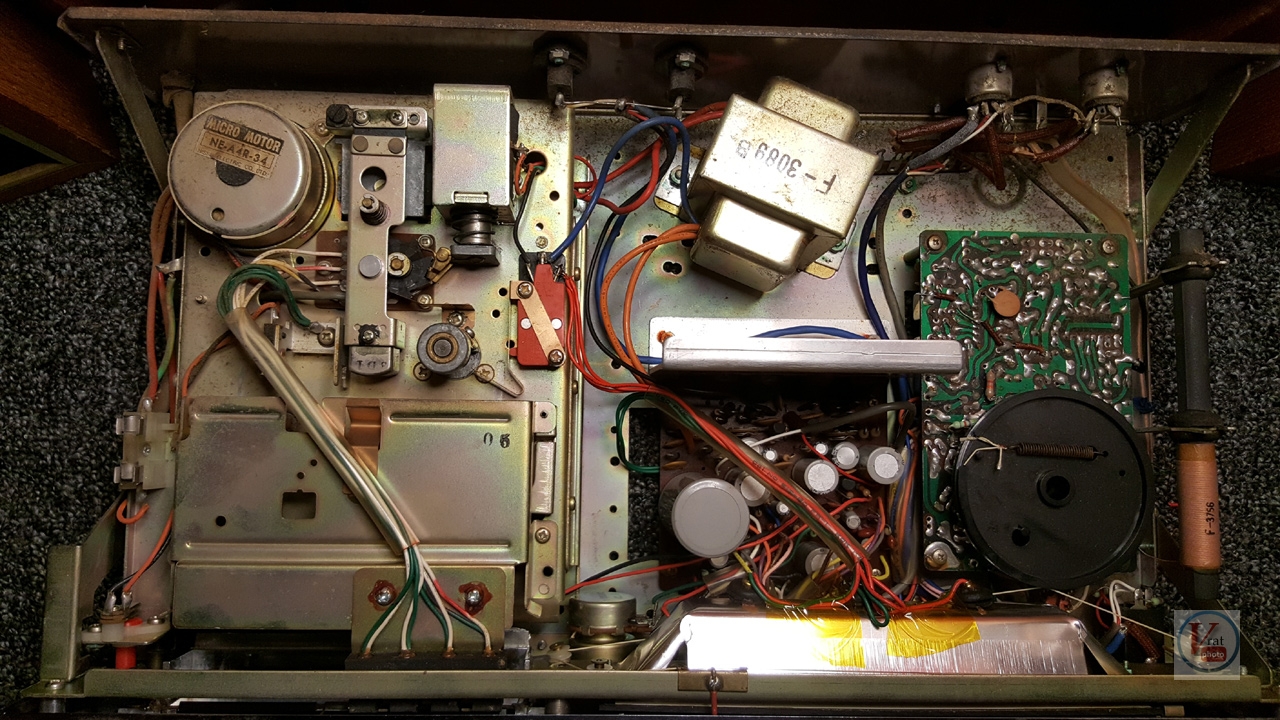 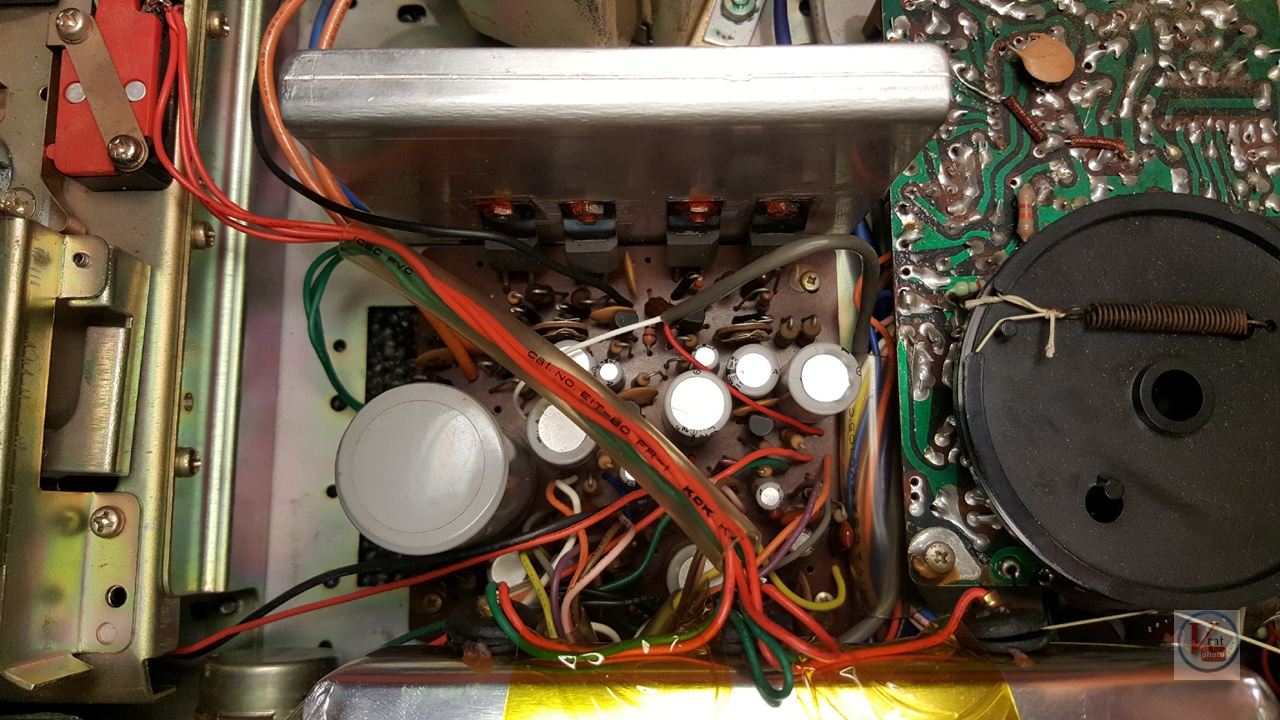 The case and speakers were fairly rough, scratched and dried out. All the wood was treated with teak oil, after six hours buffed up to a satin shine. It looks very good now. 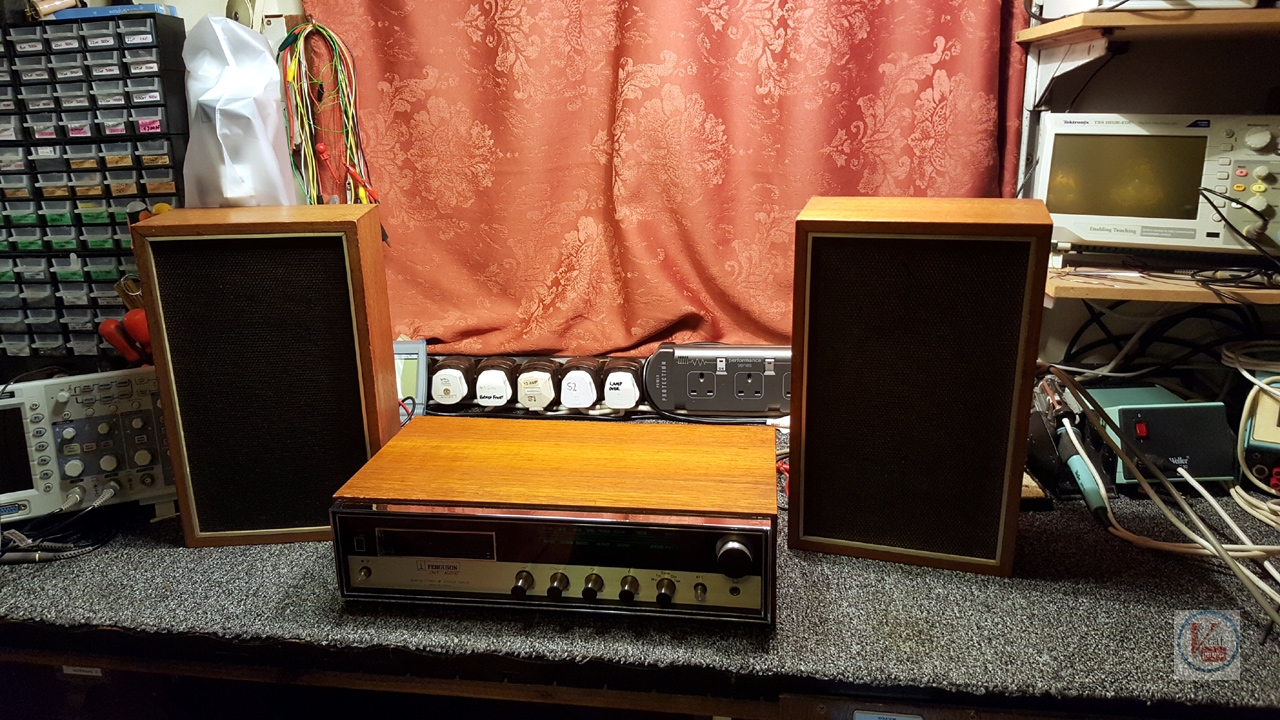 What’s Left To Do?

Only final observation is that the left channel seems quieter than the right, more than I’m happy to live with. The next phase will be looking into this, quite possible a dried up electrolytic in left channel drive or a resistor gone high perhaps biasing it incorrectly, I’ll run the ESR meter over the caps to see how they fair. We shall have to see, more on this fault in due course.

Picked one up on Facebook marketplace in nice condition. All working well other than sound bleed through on tracks one and two. Assume the playback head is slightly out of alignment. Nice bit of retro kit though – the playback quality is way better than from standard cassettes of the period (early 70s).