Adding further to my 1970’s audio setup, I was in the market for a 70’s cassette deck.  I didn’t fancy one of those shiny silver units and certainly not the matt black ones. I was specifically after something with wood and preferably not Sony. I have a Sony TC-131SD and to be honest I didn’t like it, in fact I’ve never much liked anything from Sony be it audio or visual.

Anyway, last week I found this rather pleasing little gem. A Hacker HCD1000, still with its original box, paperwork, allegedly working and at a Buy-it-now price I was comfortable with. Today it arrived, it was unboxed and happily arrived safe, here’s some pics. Later I’ll get it hooked up to an amp and see if it does indeed work. I’ll also scan the brochure and manual for the library. 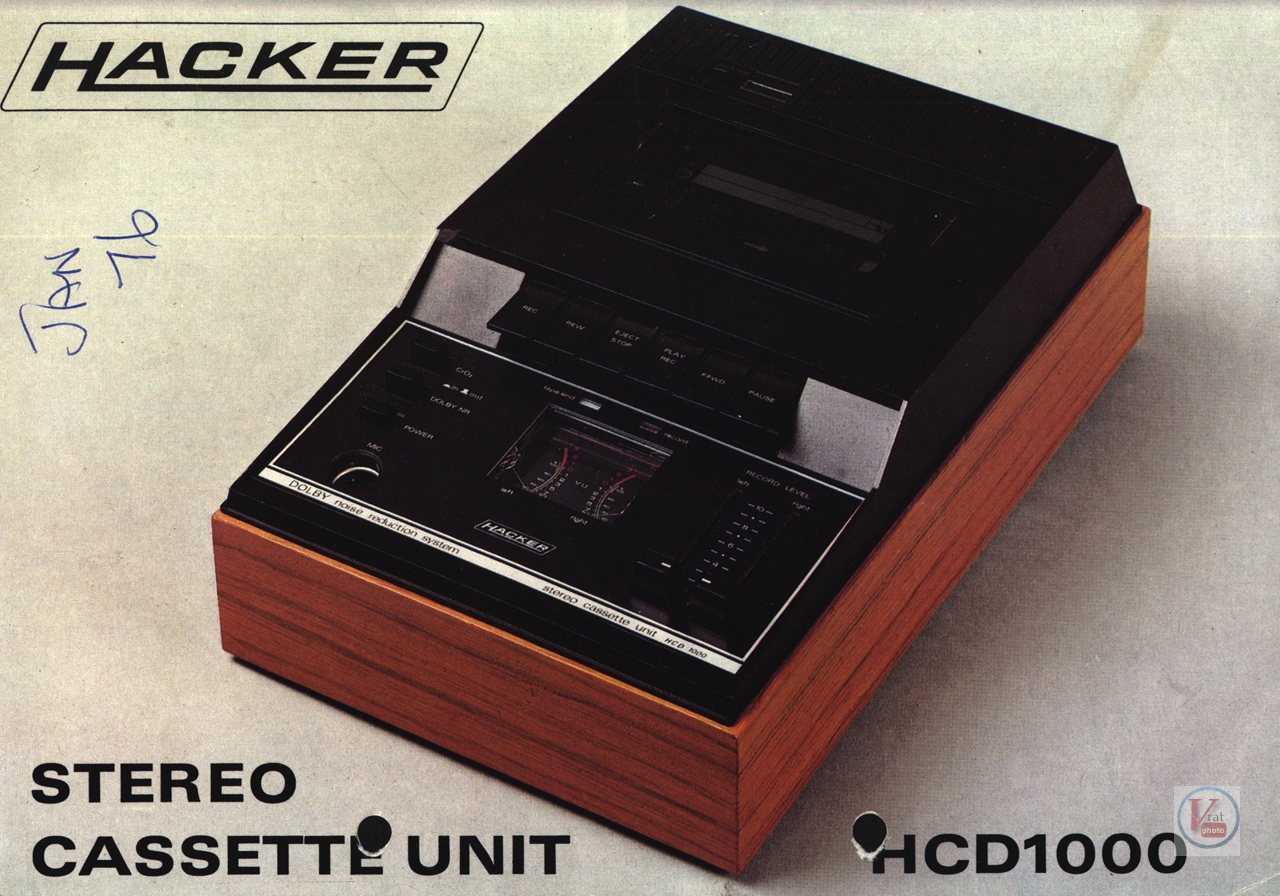 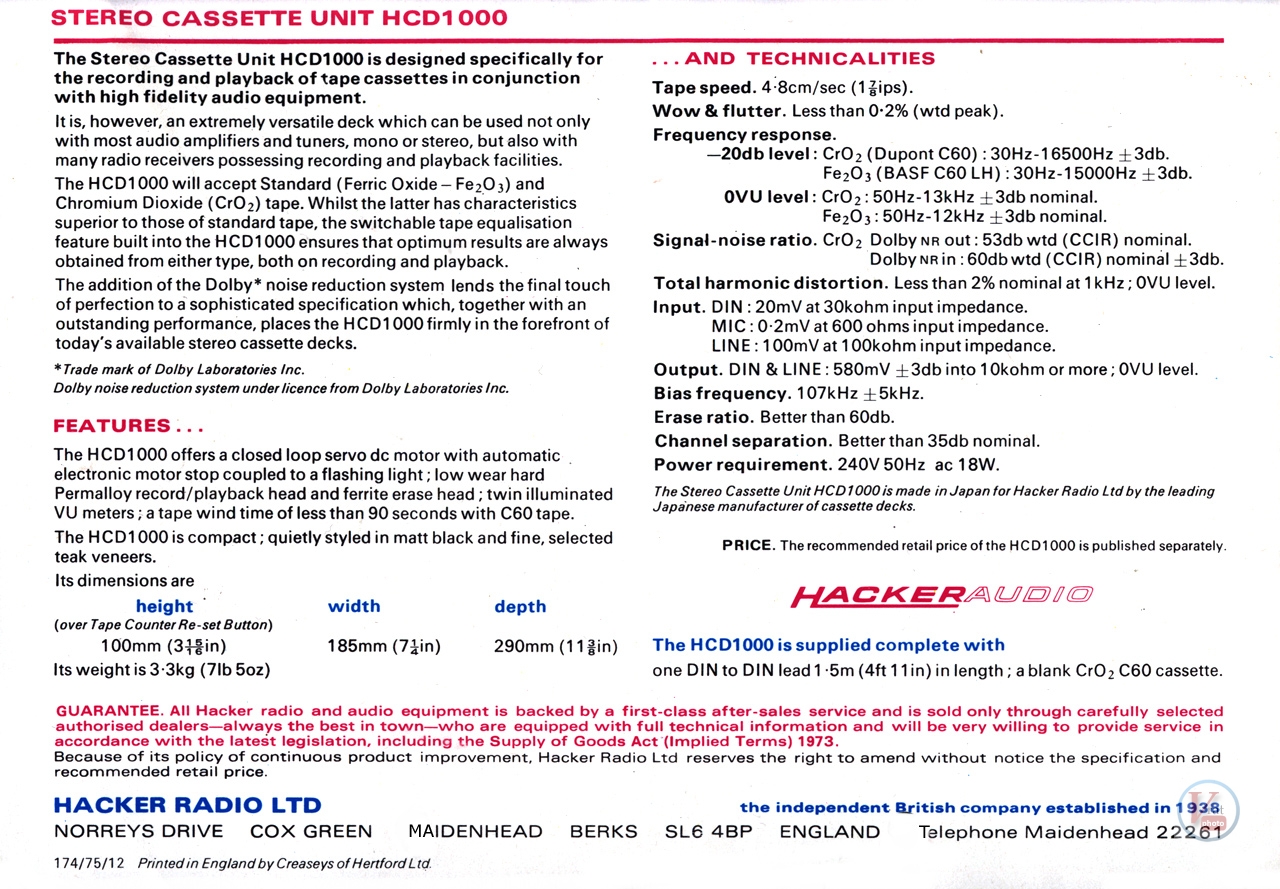 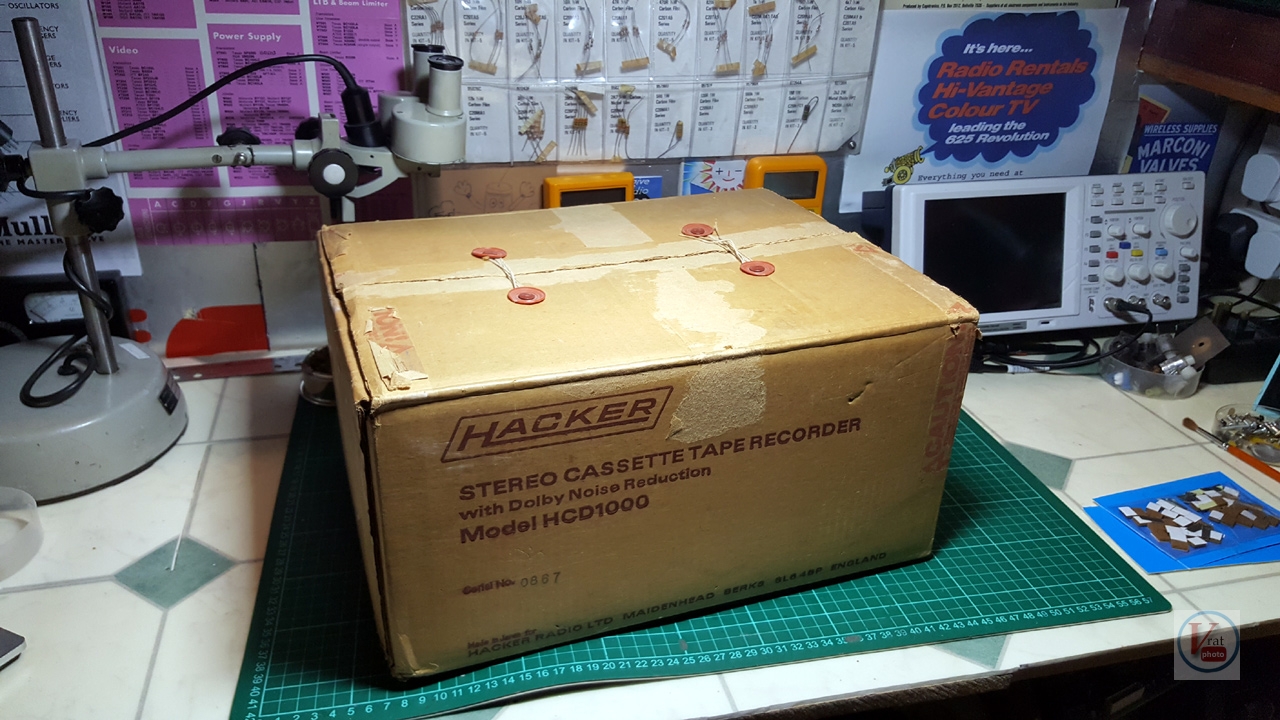 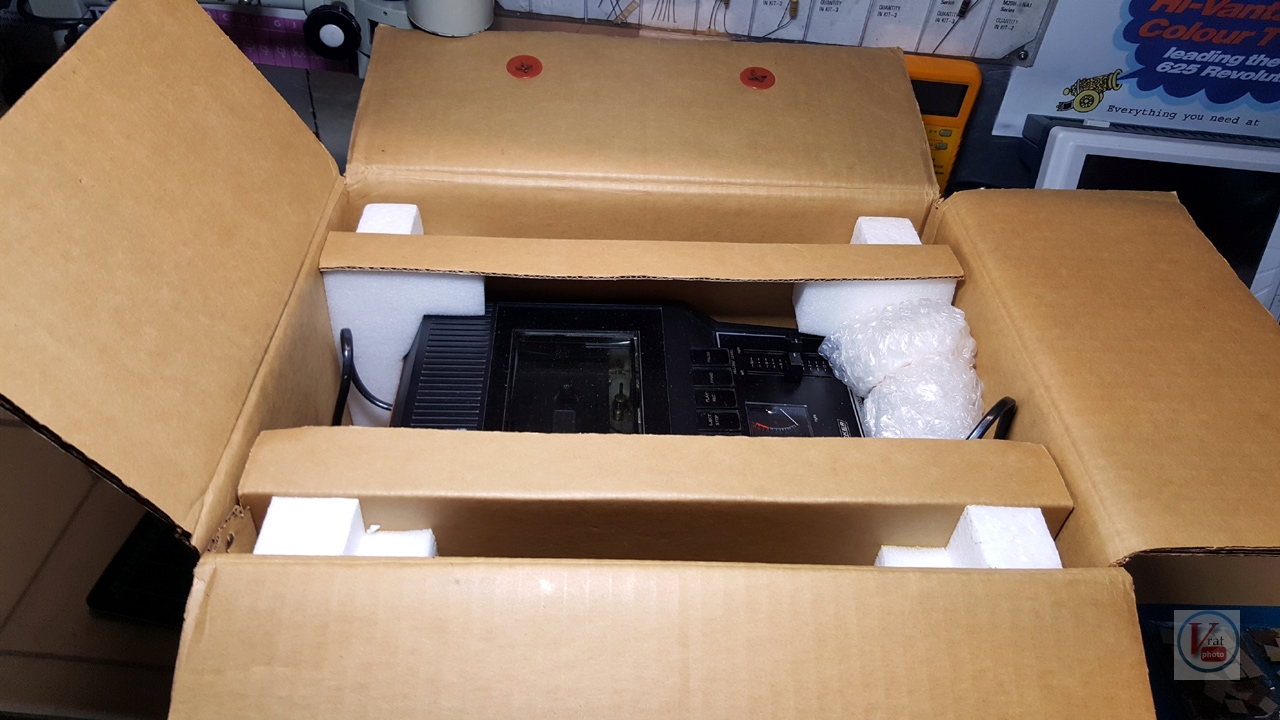 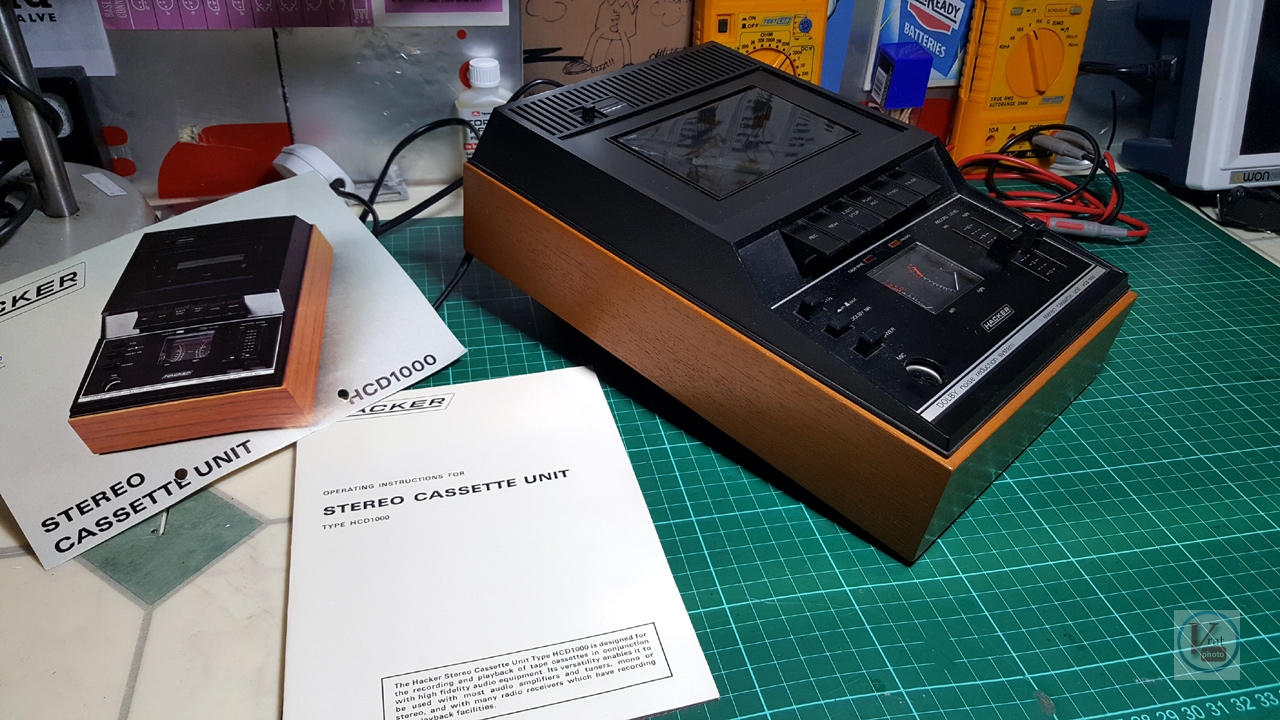 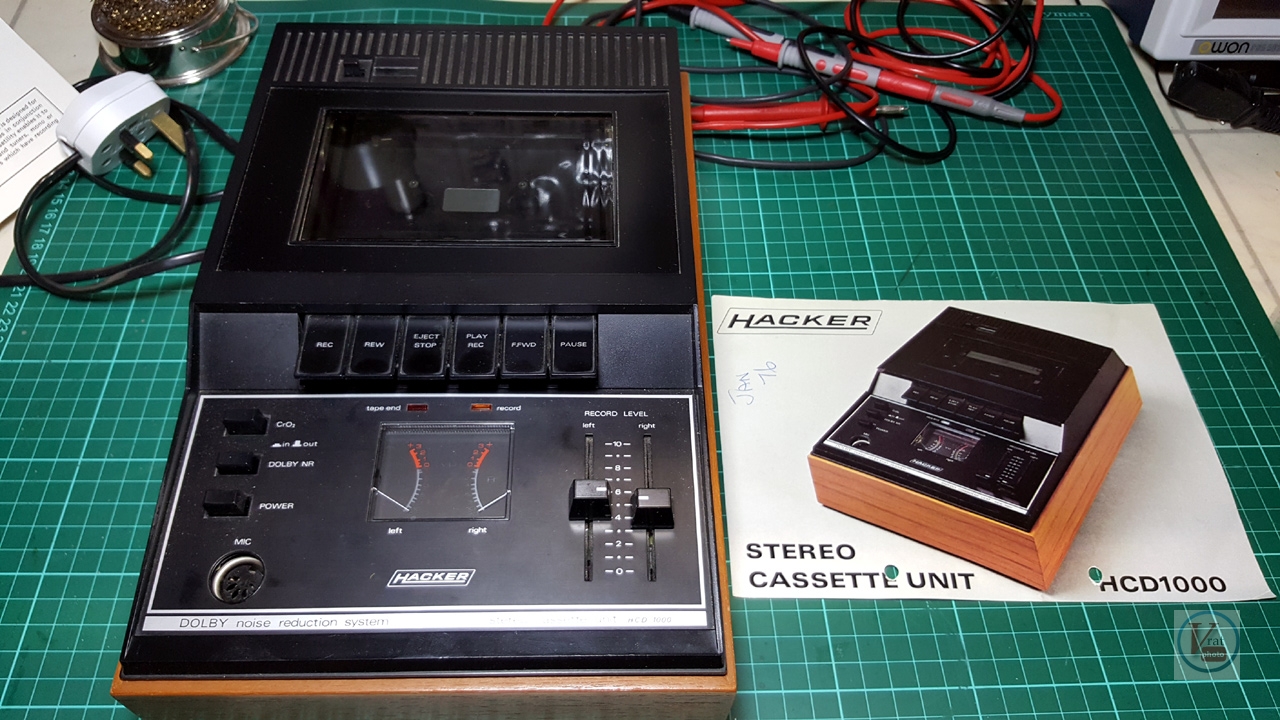 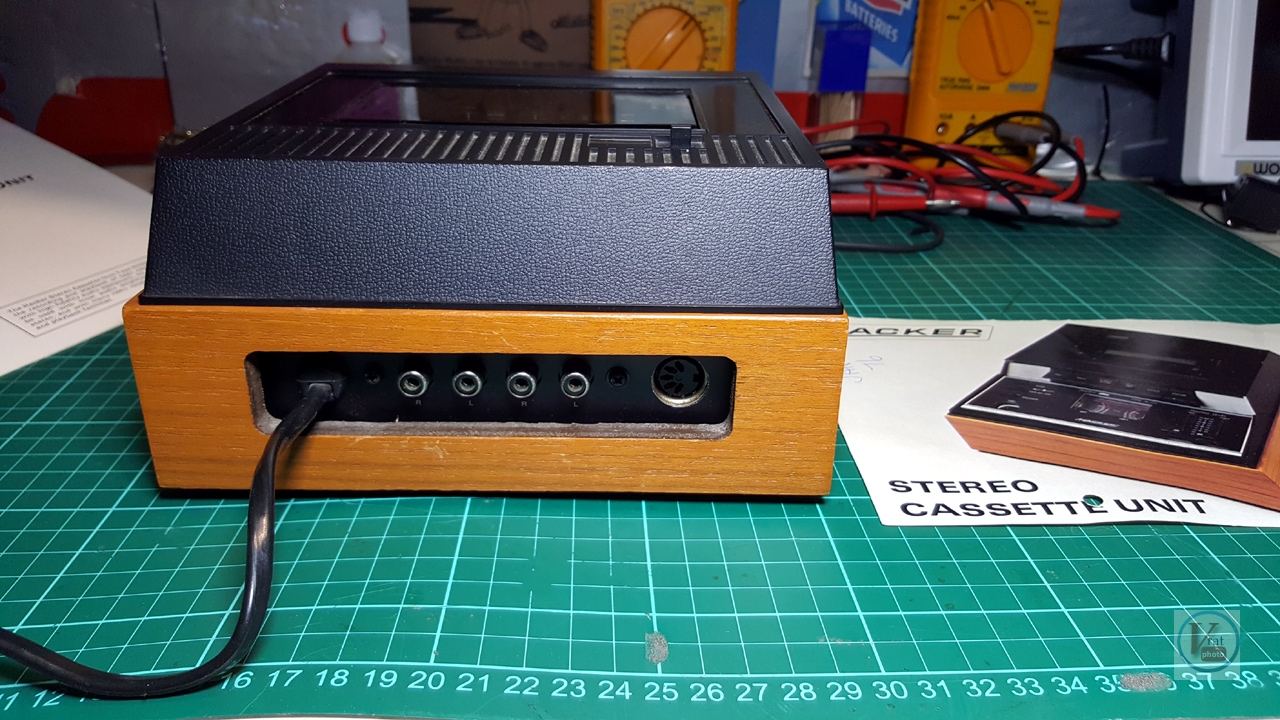 Just looking at that pile, 10cc’s How Dare You was one of the first albums I bought in my teens. The last one with the original line-up.
There’s also a superb compilation in there: Joan Armatrading’s Track Record.

Hi All,
First, my apologies for the mis-spelling of Nakamichi that caused confusion in the service-data request thread. Most embarrassing! In my defence, I do get it right most of the time, as a quick search confirmed, much to my relief!
Having just seen that request thread, I logged in to provide a link to Franks thread on UKVRRR, but then read the rest of this thread and saw that has now been covered here a few weeks back. Plus you’ve got the confirmation of who the OEM was (they did a lot of OEM stuff, as this link shows, at the bottom: http://www.naks.com/products/ – that might come as a surprise if you’re used to their later high-end activities. Well, it did to me ;)). Anyway, I’m bit late to the party, as usual 😉
Looking at the Fisher manual, I think there might be a few differences. It’s been several years since I examined my HCD1000, so I’m going by memory, plus some photos I took at the time.
Those photos were uploaded to the Hacker group, which has now moved to groups.io: https://groups.io/g/Hackerradiogroup/album?id=190118
The user manual and a brochure are also there: https://groups.io/g/Hackerradiogroup/album?id=190119
You do need to be a member to see those, but obviously that’s free. I took those photographs and made those scans, so no problem using them here if you like – though I suspect the material is the same as you already have. I do plan to put those materials and photos on my own website one day, along with lots of other Hacker stuff that really deserves a wider audience. Sadly, my personal website always seems to be at the bottom of my priority list, which is a constant source of guilt to me.
Mine seemed to work well when it arrived. I remember there was a bit of mains hum, but didn’t have a chance to investigate further before putting it into storage. What time I did have was spent playing with the mechanism. I took apart (and mostly ruined!) many cassette decks as a kid – for some reason they always fascinated me, and I got to know the various layouts quite well. This one was a bit different to those I’d seen before – it uses a 2 speed motor for winding, which simplifies things quite a bit (though the Fisher manual shows a single-speed motor). While I can’t remember the details at this time, I do remember that the more I explored it, the more I was impressed with it. The discrete Dolby circuit is quite an achievement too – mostly those are implemented using ICs. In typical Japanese fashion, it looks really scary at first, but once you’ve figured out the tricks, it comes apart really quite easily – it’s very modular in construction. The transport lifts out and unplugs in one operation, as you’ve probably discovered by now.
As you say, there is a scary number of pre-sets! Much more than usual, and I’m not entirely sure why. Perhaps part of it was to provide the flexibility that OEMs needed? Of course, as this has the chrome capability, you need the B manual as well – and that adds to the preset count.
I haven’t tried adjusting mine yet, but if you decide that yours needs adjusting and would like a bit of guidance, I’m happy to try to figure it out – I’ve just dug it out of storage and blown the dust off! The manual seems to be well-written in that area, but often it’s only when you try it that you discover the problems. Pretty sure I know where my alignment cassette are, but it’s been 20+ years since I last used them.
How nice to have the original packaging – I’m really quite jealous!
Again, sorry for the spelling mistake, and for arriving so late, but if I can help, I will.
Mark