The following information contained within this article should be used with extreme caution by those starting out in vintage TV repair. If you are learning ensure you have an experienced engineer with you to advise or seek advice on the forum with the online TV engineers and experienced amateur hobbyists. As a bare minimum you should be familiar with the high voltages to be found in old TV’s, have workshop RCD protection and an isolation transformer. The greatest tool though is caution and an instinct for self preservation. The following advice is for the majority of 405 televisions between 1950-1960, not colour, as an additional word of warning do not try to draw sparks on mains EHT pre-war sets. “You Have Been Warned”.

This is by no means meant to be a definitive guide, just a quick start reference guide. Each stage will present you with many varied challenges to be overcome, it is assumed the reader has some prior understanding of vintage electronics & the safety required before attempting an old TV. Likewise If you are at all unsure or are unaware of the inherent dangers these old sets present, I would suggest you stop reading now and seek advice from the forum.

Get the service sheet and familiarise yourself with the circuit this is the road map which if studied will help you to understand how the set is designed to function, if you cannot read a schematic worry as you really need to so start learning to understand them. Have the best tools ready, your multimeter and common sense, think safety at all times never take anything for granted check and double check every stage of your interaction with a set..

First, a quick visual check for missing bits or obviously damaged components or wiring. Check heater continuity with meter, check and operate the on off switch. Ensure chassis is wired correctly if AC/DC chassis should be at neutral again use you meter to confirm this. Finally ensure the TV is set for the correct voltage, you will be surprised how often this is not and sometimes in an indicator some unscrupulous type has tried to overrun the set to eek out the last emissions.

2. If You Are Of A Nervous Disposition , Avoid The Pop

After the checks in one the set can be plugged in but be ready to switch off, in most cases it will either warm up or nothing will happen at all. Alternatively for those who are concerned about easing the old sets in, then the next approach is as follows:-

Snip the capacitor that is across mains (check the schematic), this is the mains filter cap/ RFI suppressor it’s called many things. Now with a variac, lamp limiter or both and connected via an RCD if your consumer unit is not fitted with one, give it a little taste of mains to see what happens. If you have a variac try starting it off at around 50v, increasing by 20v every 5 mins. A damp dusty smell of mains droppers and likely a bit of smoke as the dust burns off, don’t worry this is quite normal from a set that has not been powered on for a long time. If the smoke is not eminating from the dropper try to quickly determine where it might becoming from, possible an electrolytic. DO NOT stick your face or head directly over one, if these suddenly let go they can cause great harm. Switch off and disconnect from the mains, feel the can, does it feel hot, if so then it will need replacing.

Use all your senses to monitor what is happening. Are the valve heaters glowing correctly or are they too bright, you don’t want to fry all your valves if the heater decouplers have failed or overrun individuals through other cap failures. Look for obvious signs of burning components or wiring or burning smells, listen for a hum from the speaker is it the deathly van Helsing rumble of main smoothing trouble or just normal/crackles, look for bubbling caps, etc. and be ready to switch off!!

If you’re very fortunate you may start to hear ( if you still can) the 10,125Hz line whistle from the line output transformer accompanied by something on screen. It helps to have the contrast and brightness set at mid point but have a twiddle just to see if you get a glimmer. The line whistle may sound odd, sort of strangulated and not healthy…. Don’t leave it like this too long as you may put the LOPT (line output transformer) under stress. More often than not the set will appear to be dead with perhaps just the valve heaters glowing. 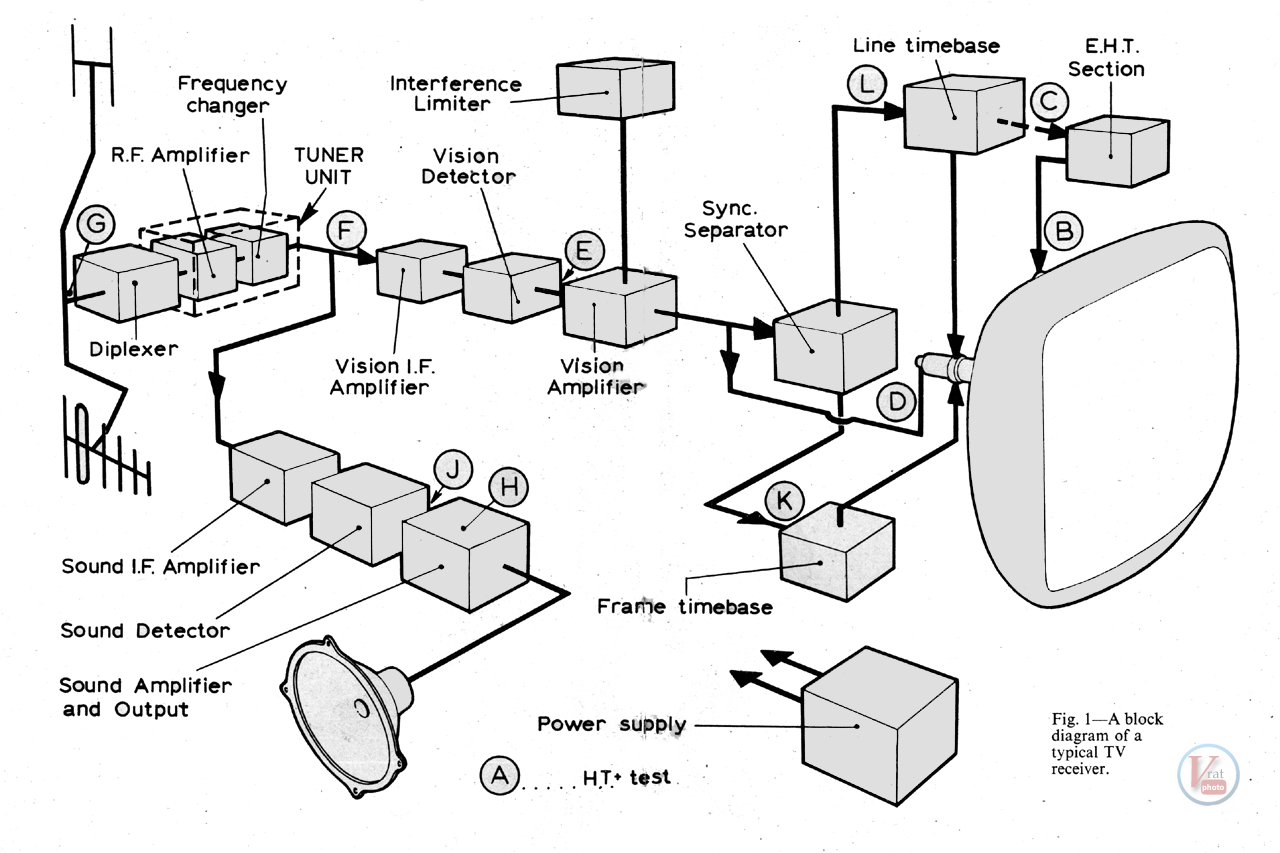 These following tests should help you gain a quick insight into potential faults in the modules above.

Test with multimeter to chassis, AC/DC receivers with half-wave rectifiers should have a minimum of 180V, and so should many AC-only television, but expect to find exceptions with full-wave rectifiers (giving 250V or more). A low voltage on the H.T. line can be due to low emission rectifier or to a heavy H.T. current drain owing to a partial short circuit anywhere in the TV. Lack of voltage can be due to a faulty or o/c rectifier. wire-wound resistors, a blown fuse,or to faulty surge resistors (sometimes included on the mains dropper). The main H.T. line can be assumed in order if the raster is normal- but a branch H.T. feed might still be at fault.

Test at the CRT connector by drawing an arc to the blade of an insulated screwdriver held well back on the handle. If a spark is not produced, try with the connector removed to check whether the CRT is shorting the supply, in which case the EHT will reappear. The D.C. EHT spark should be blue and crackling. Lack of a spark with the EHT cap removed indicates no A.C. EHT input to the EHT rectifier or the rectifier itself is faulty.

Test at the EHT rectifier valve anode as described in test B but this time s sizzling violet arc should be produced. Try also with the CRT cap off if no spark is produced with the first test. No A.C. EHT indicates line output failure, possibly the line output valve, booster/efficiency  diode, line oscillator, line output transformer or associated circuitry.

(a) With a normal raster in which the brightness can be controlled, scratching the cathode pin with a bare screwdriver blade ( ensure used with insulated handle) should produce a few weak spots of low brightness on the screen.

(b) With no raster (EHT in order), momentarily short the grid pin to the cathode pin, if a bright raster appears, a bias fault exists.

(c) Uncontrollable brightness ; test the grid and cathode voltages with a multimeter. Bias faults can be due to shorted electrodes in the CRT, a fault in the brightness control circuit , incorrect vision valve potentials or oscillation in the vision amplifiers.

Scratch the grid pin lightly with the tip of a screwdriver and a splash of white spots should appear on the raster at the time of contact. Failure to produce spots indicates a defective video stage ( the CRT being assumed in order). If the tube circuit is untested, then the fault lies between point E, the CRT and its supply circuits.

Grid disturbance testing here will produce brighter spots than at point E and in so doing proved the vision I.F. stages to be operating. Crackles will be heard in the sound during this test. The previous vision tests described should have been made first. This test can only show whether the stage is dead or not.

(If there is a common I.F. stage in the television , disturbance testing at the grid of the common I.F. amplifier valve produces loud sounds and flashes of spots on the screen.Obviously lack of results here but results from the previous test point F, show this stage to be at fault)

Correct results from the earlier points up to F but no result here show the turret to be defective. The effect of a substitute aerial should be determined because many TV complaints are found to be caused by faulty aerial or cable.

touching this grid will produce a low hum in the speaker. Sometimes it is quicker to omit this test and go to J first as this point is more easily identified.

This point is easy to find and touching the tag with a screwdriver will cause loud hum. The volume control knob must be turned up for this test. No results here, but results from test H indicate the first audio amplifier stage is at fault. If a multiple sound output and A.F. valve is employed, then failure of this valve renders both stages ‘dead’. To test the sound I.F. stages make a test on point F, or the grid of the sound I.F. valve , to produce crackles from the speaker.

When doubt exists whether the frame oscillator is operating, in the absence of vertical scan, a quick test can be made by linking a 100pF capacitor between the frame oscillator grid and the volume controls live tag. A regular 50-cycle tick should be heard in the sound that will vary in pitch as the vertical hold control is altered. This result indicates that the oscillator is operating and that only the output amplifier needs to be investigated. Remove any signals to the aerial for this test  as the sync pulses can be confusing. 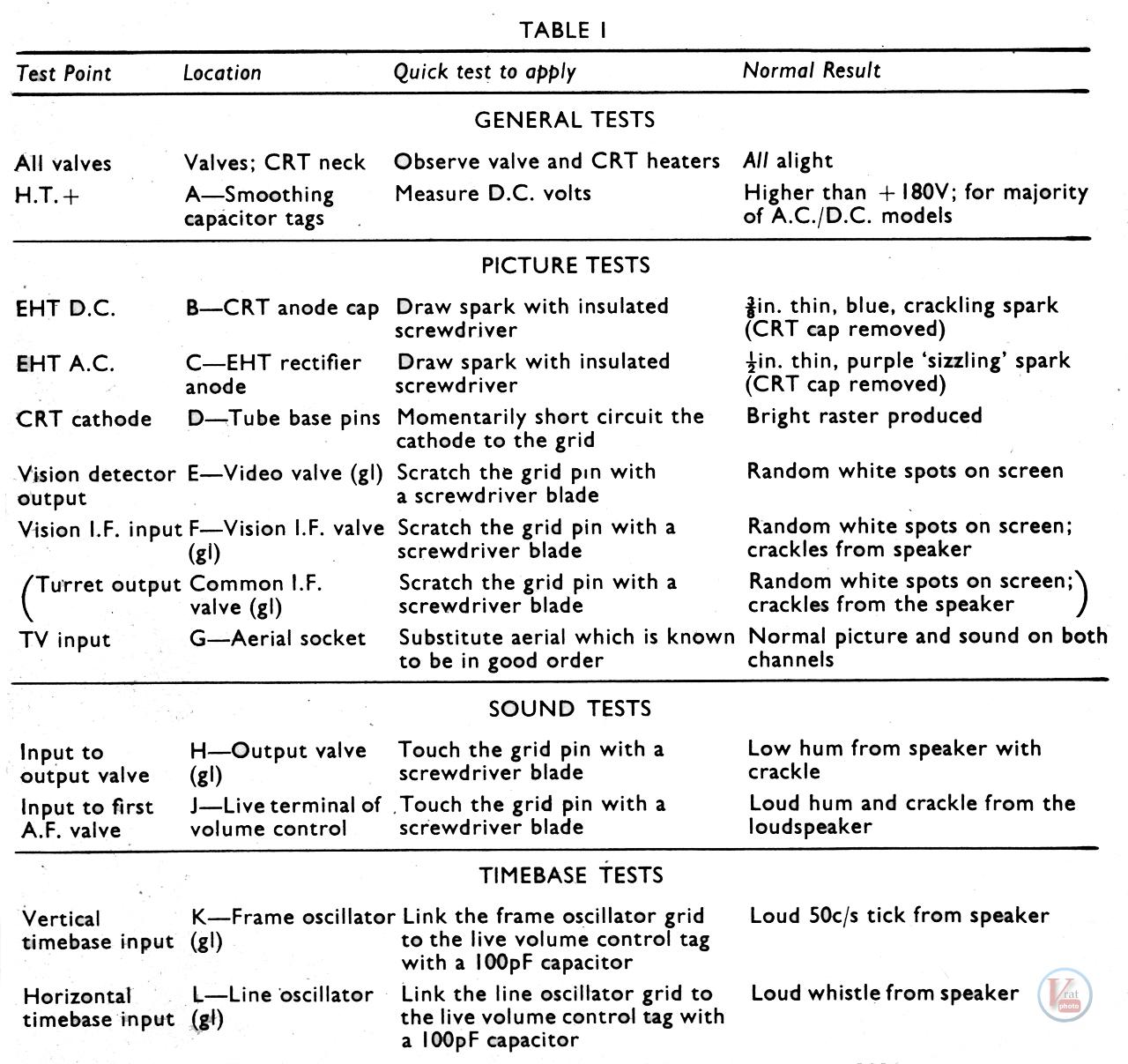 6. This Following Table Should Give Some Pointers