The following information and procedure was researched and proven by Member PYE625 (Andrew) . It is an effective cure to the age old problem with the LOPT on sets such as the Bush TV125, 135 etc where the picture starts to shrink inwards, the HT drops and the LOPT starts bubbling.

Andrew has repaired a number of sets this way and another member Colourstar (Steve) also followed the procedure. In all cases the LOPT problem was cured. Now over to Andrew to detail the procedure.

“Well, after about half an hour when using 625 lines, the width does start to shrink. So I applied a small amount of  current to the overwind to see if it would dry out a bit. When cold, the set works normally with roughly correct HT voltages. After a few mins, the width will start to shrink and HT drops. It is the line stage dragging down the HT. The overwind gets a little warm to the point of being slightly soft, but not melting. I tried leaving the overwind powered up overnight with 30VDC to try and dry it out, but no difference….” 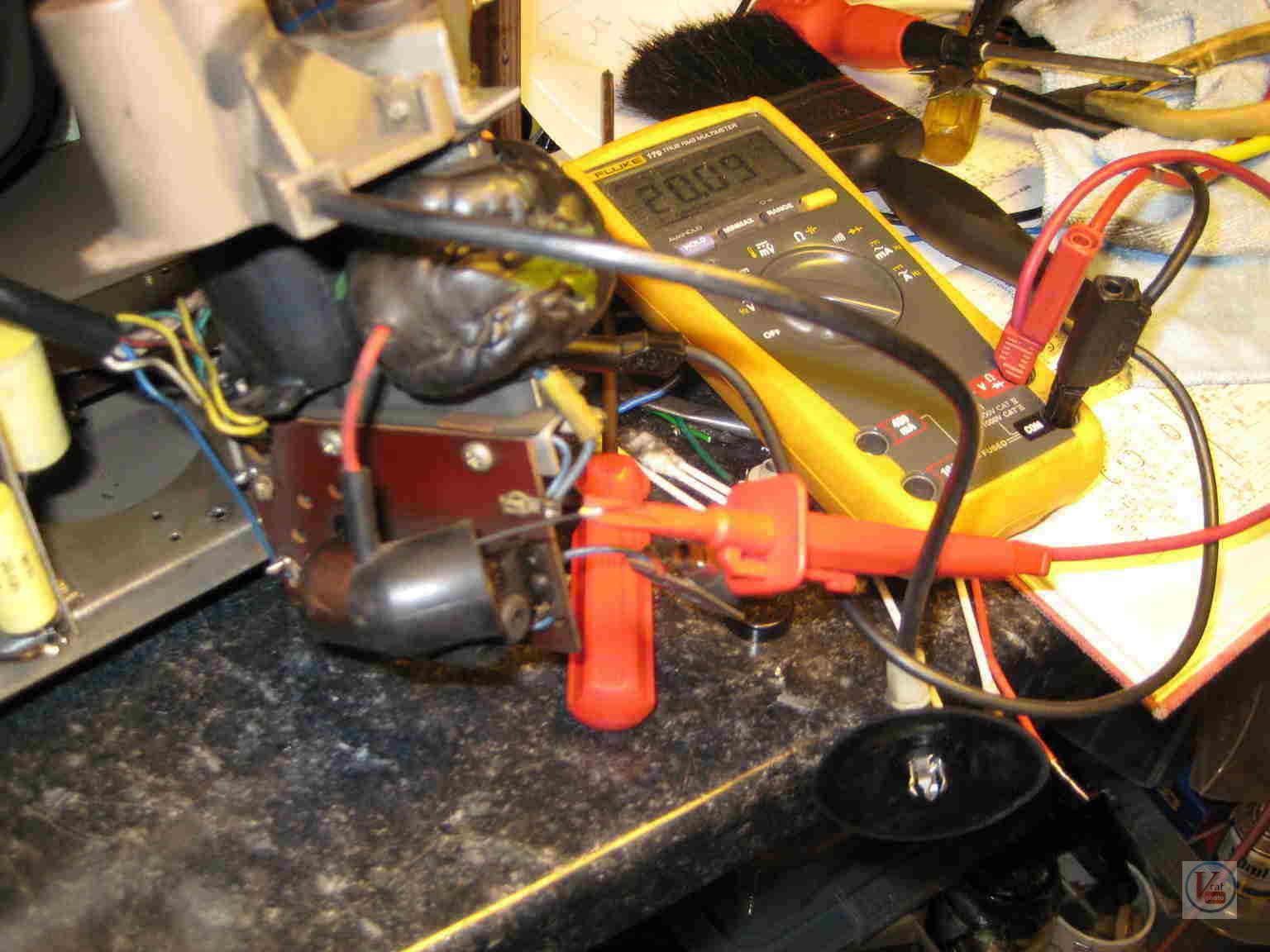 “Within the overwind, there is another smaller coil that is switched in for 625 operation. You can see the connections in the yellow sleeve on the overwind.  I started to wonder if the common fault we’ve all encountered is high voltage leakage to this winding, could this be the problem?” 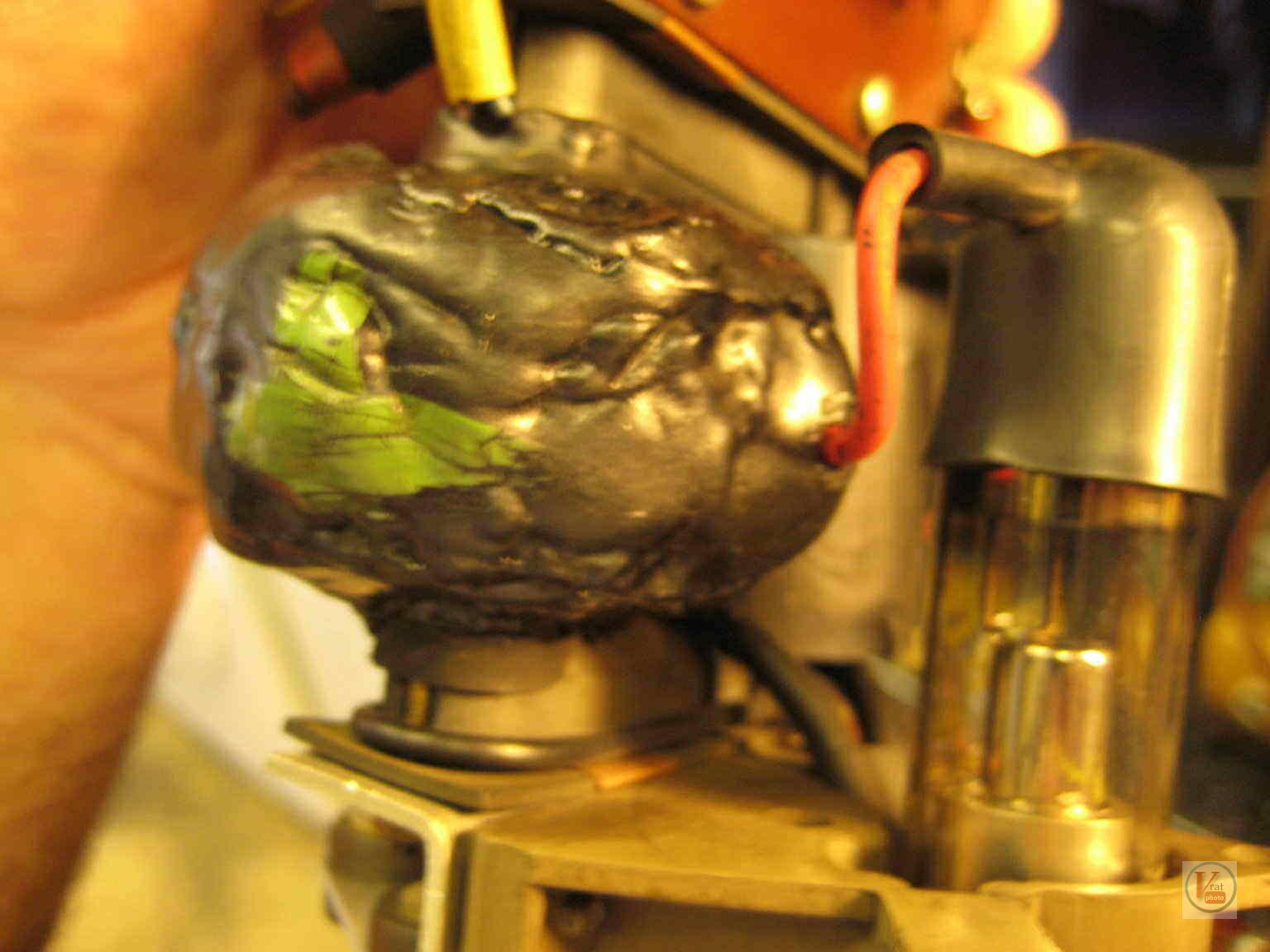 Now….what to do about it?
Can I pull off the overwind section and possibly improve the insulation between windings?

Yes, I was able to separate the overwind from the former which has a small winding on it.
It was only possible to remove when quite warm, being heated by approx. 35 vdc across the overwind for a few mins.“ 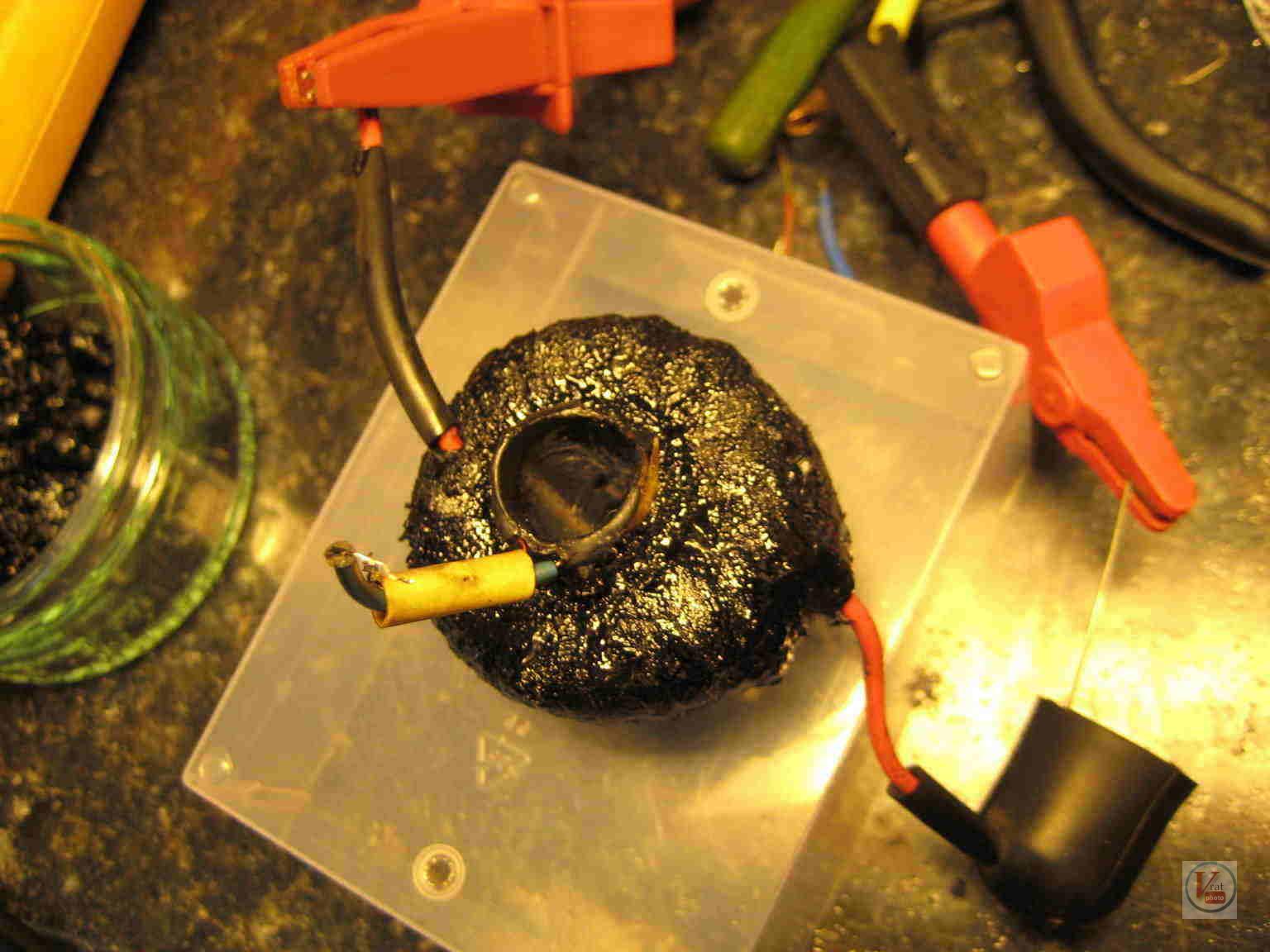 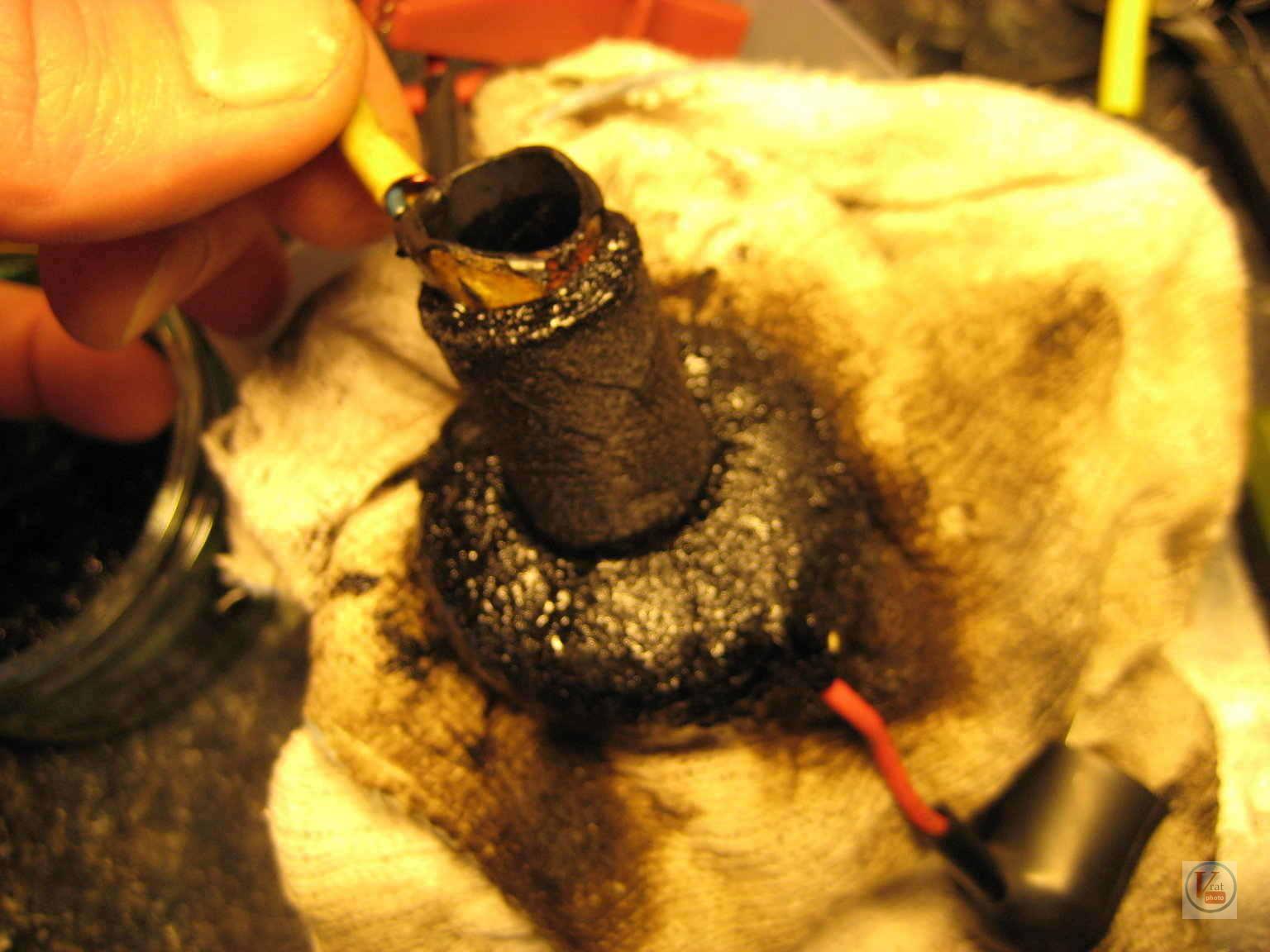 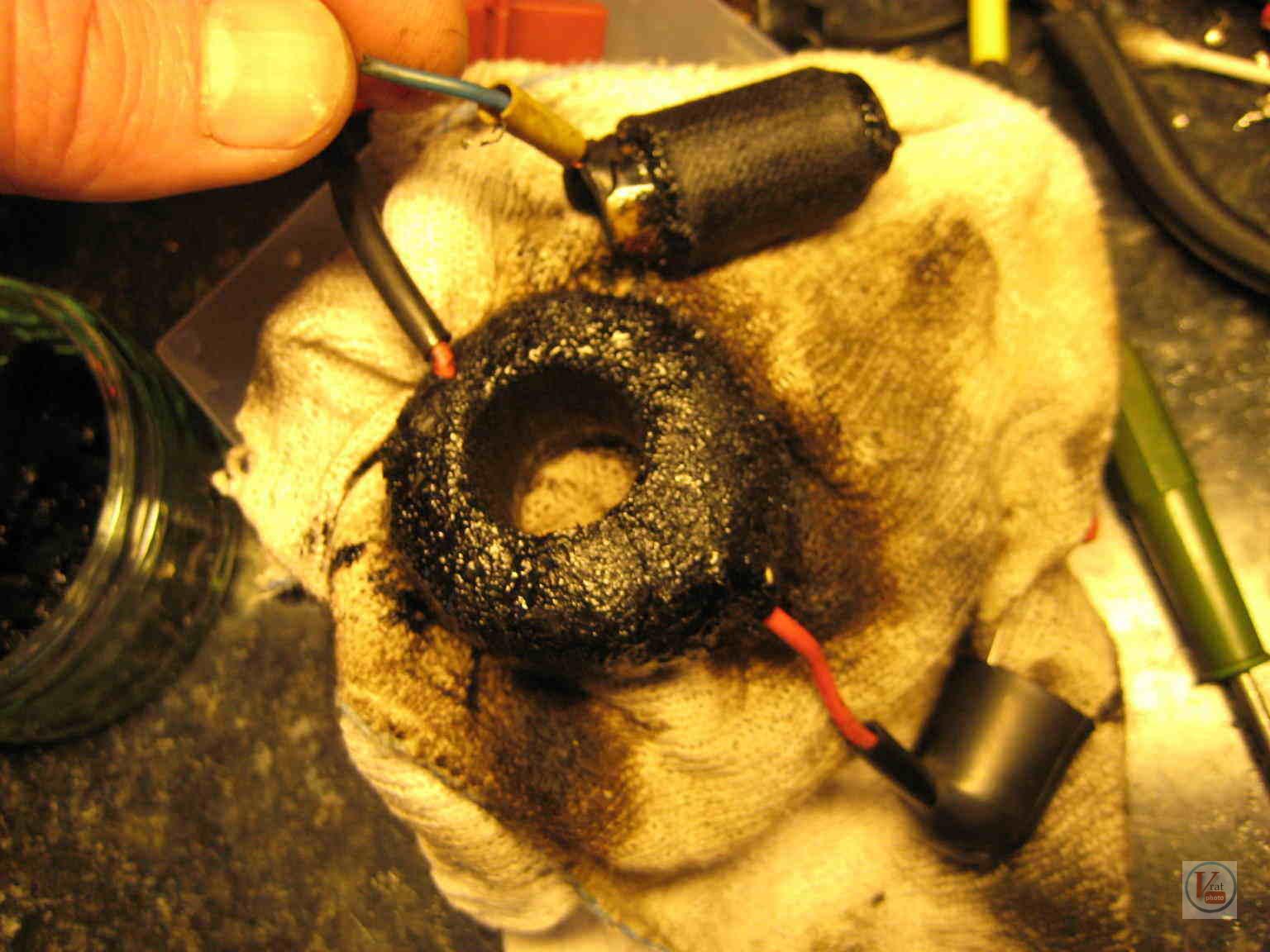 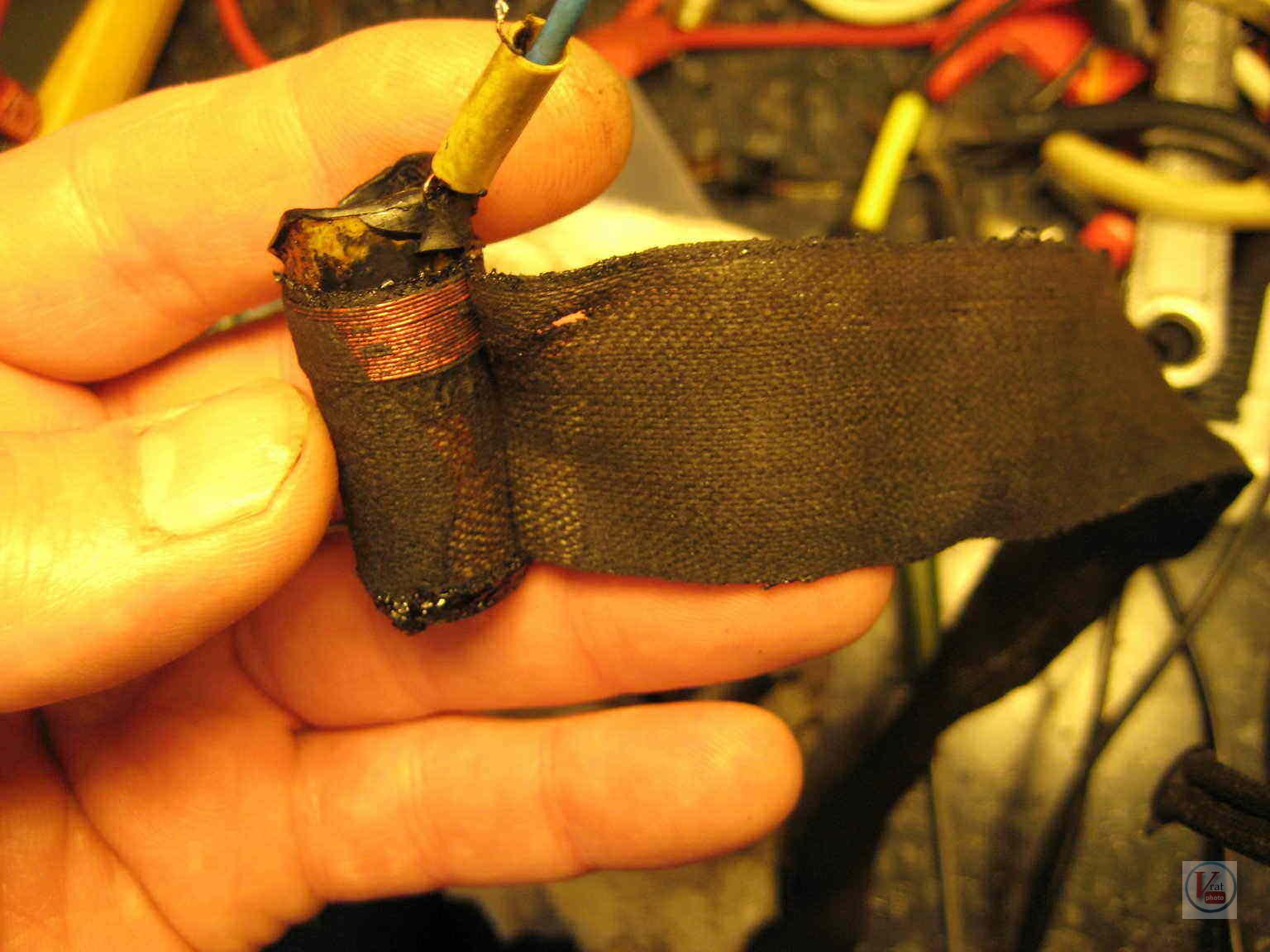 “First pic. is of the rather messy overwind with the pxolin former removed.
I unwound the fabric tape that is meant to insulate the small inner winding from the overwind.” 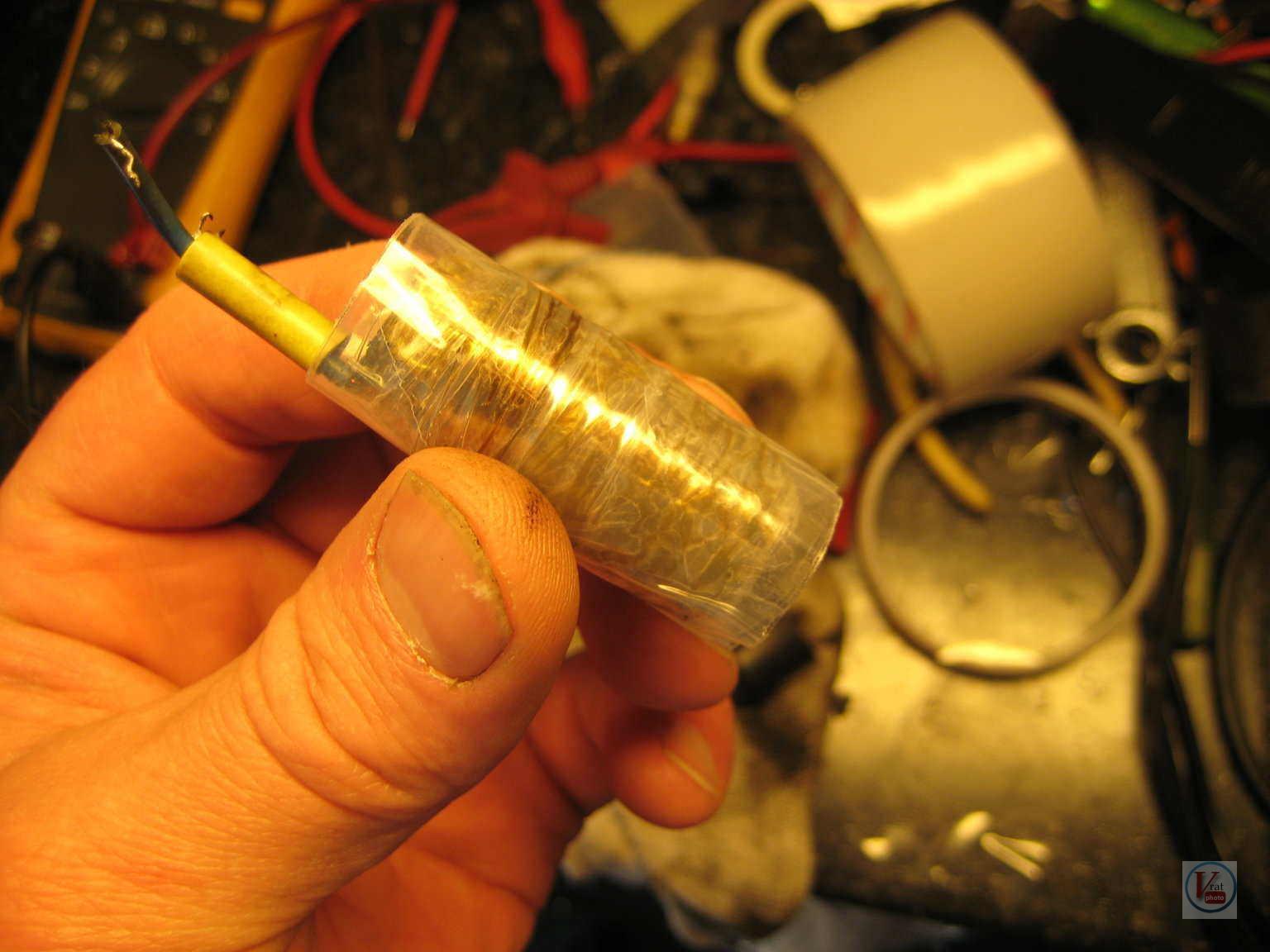 “I used kapton tape and then polythene tape to replace the old fabric tape, being careful to maintain a suitable thickness so the former would still fit back into the overwind doughnut.

I re-assembled the LOPT and tried it out…..SUCCESS!!
HT is normal, width is normal and the set has been on 625 for hours without any re-lapse. 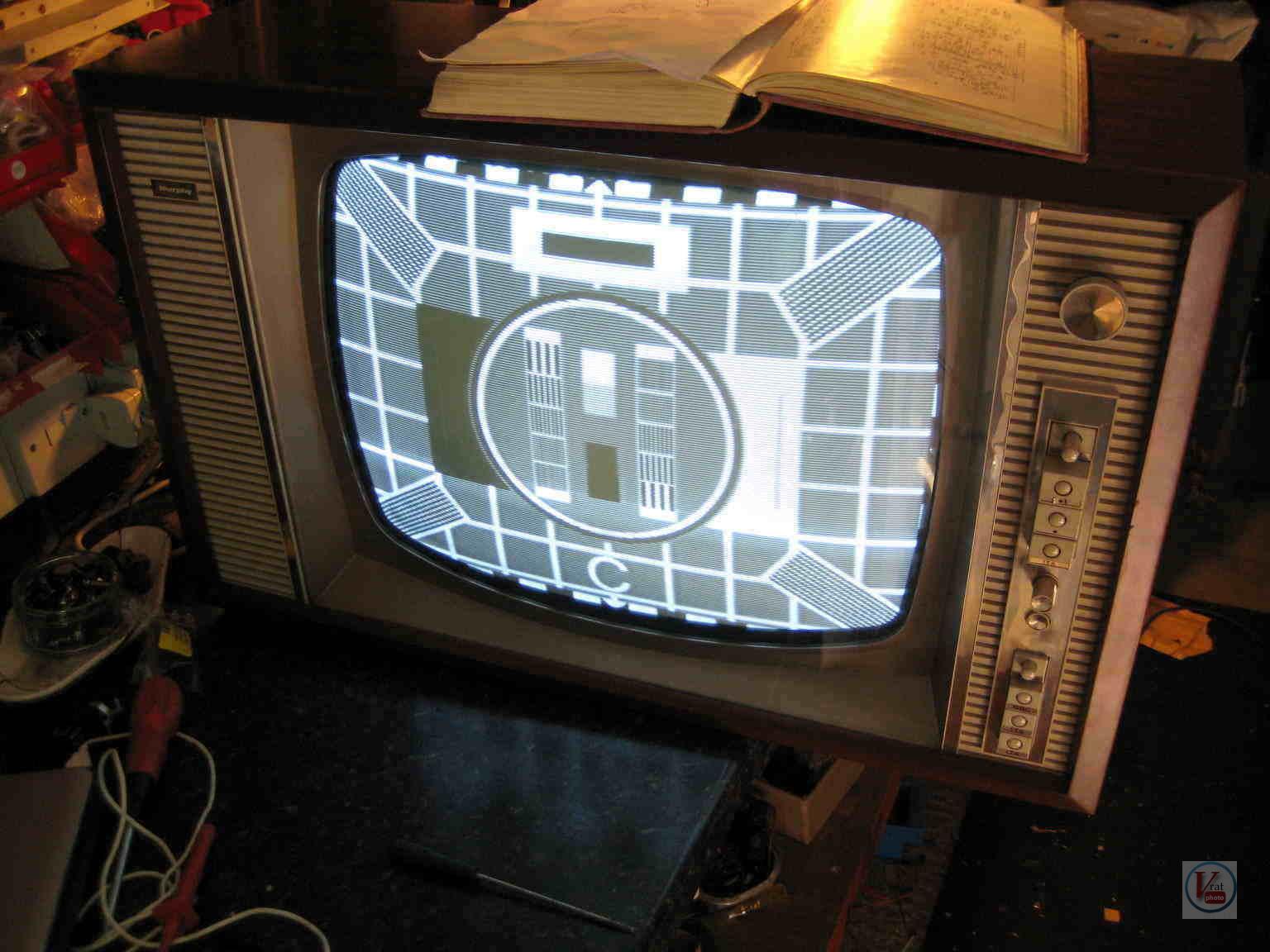 This would seem to be the cure to the dreaded Bush/Murphy sick LOPT problem.

“It is not all plain sailing as there was an additional problem with the overwind. I noticed a very slight fizzing noise and could see the surface of the fabric tape of the overwind, adjacent to the entry point of the start of the winding, was warm. Here at the point of entry where the black sleeving is. After removal of the LOPT once again and the overwind, I unwound the outer layers of the fabric tape from the doughnut. I could not really see anything wrong other than rather close proximity of the soldered joint of the input terminal to the final outer winding on the coil going to the top cap of the EHT rectifier. I removed the remainder of the fabric tape, remade and insulated the input connection, then wrapped the overwind up in polythene tape in a similar fashion to the original fabric tape. This has now cured the additional leakage, that I presume was occurring from the start to the finish of the actual winding. The conclusion for me is that the tar-soaked fabric tape is a very poor insulator long term.
Here is the overwind doughnut with new polythene insulating tape re-fitted to the LOPT. 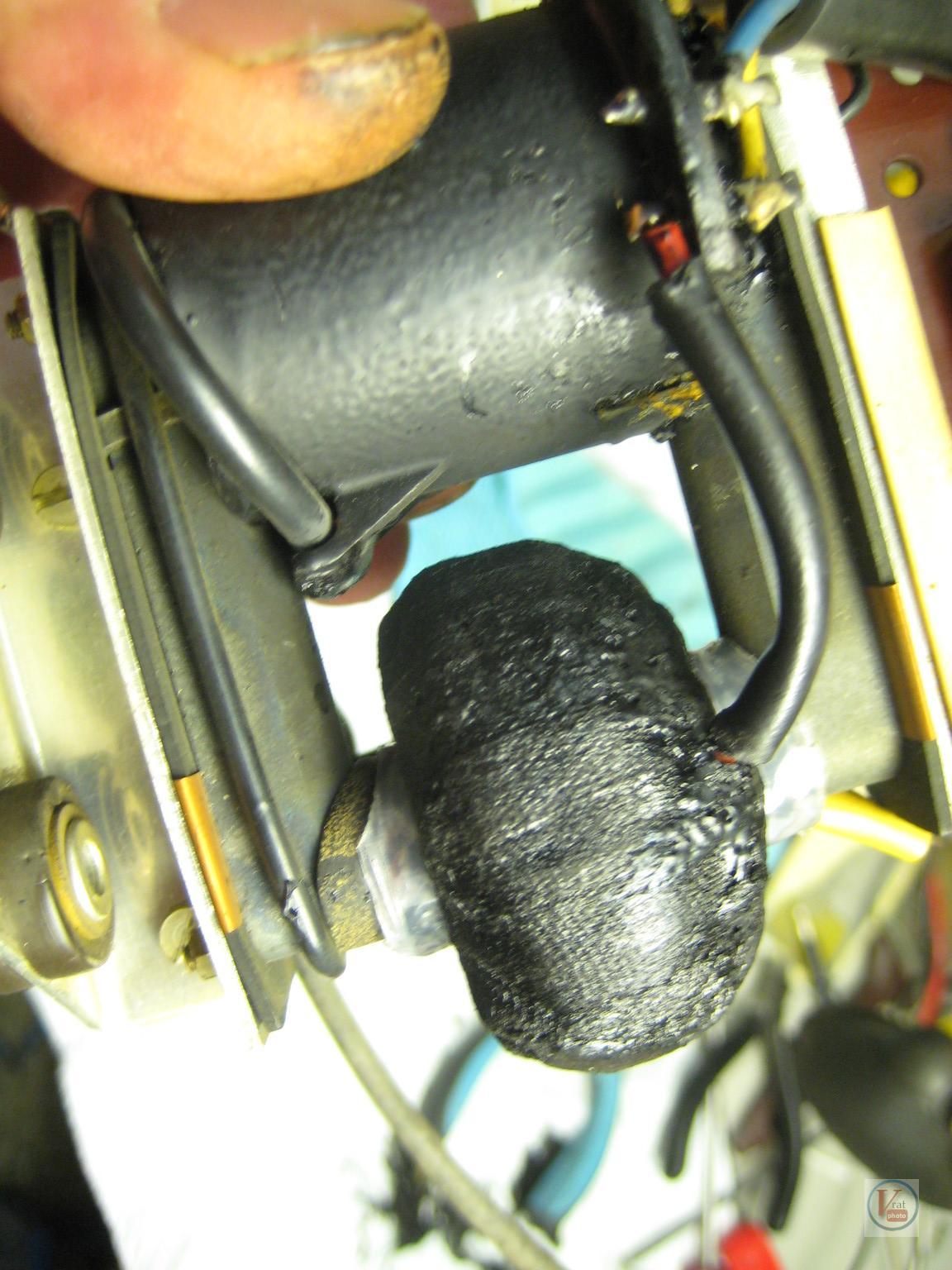 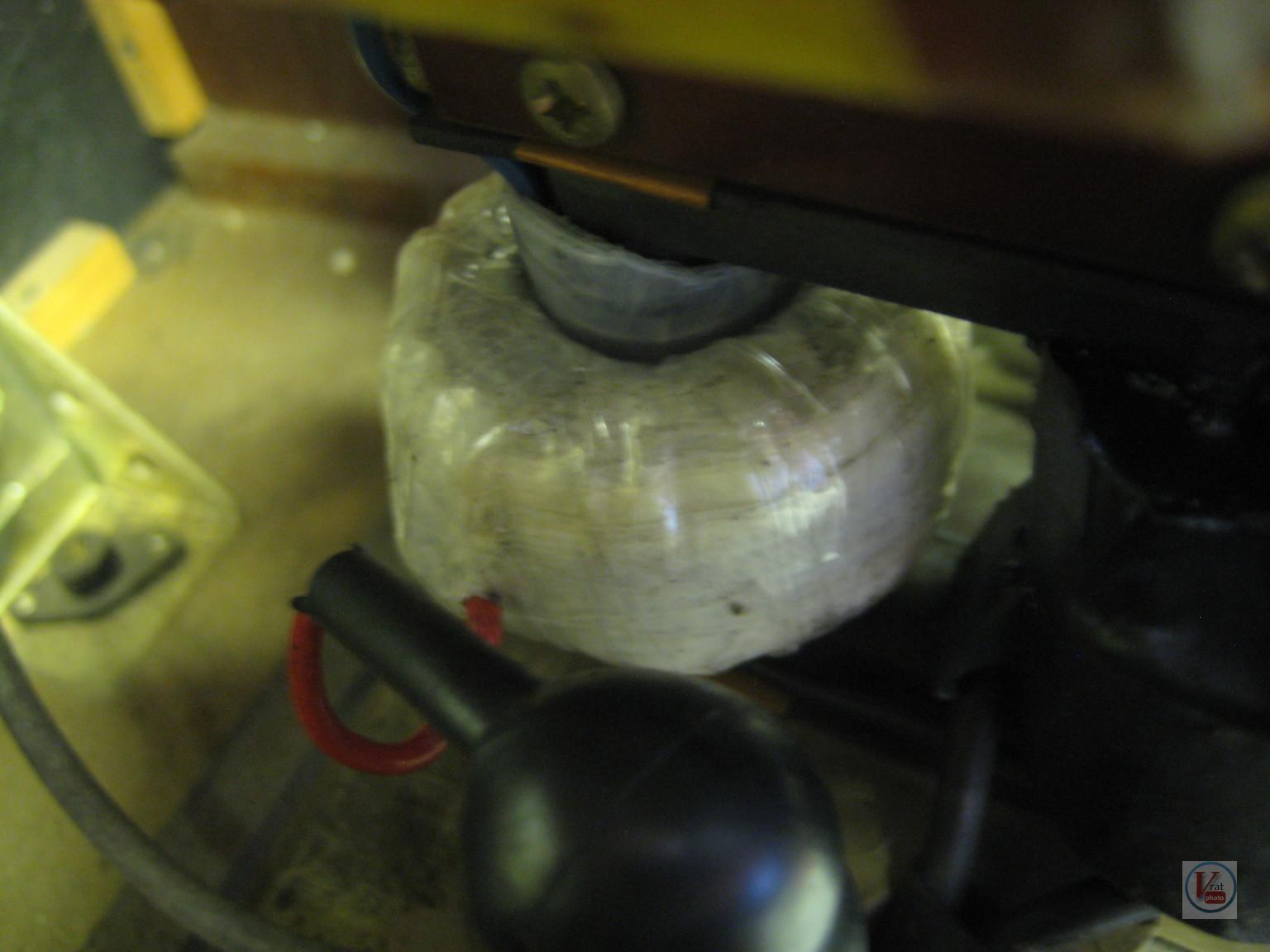