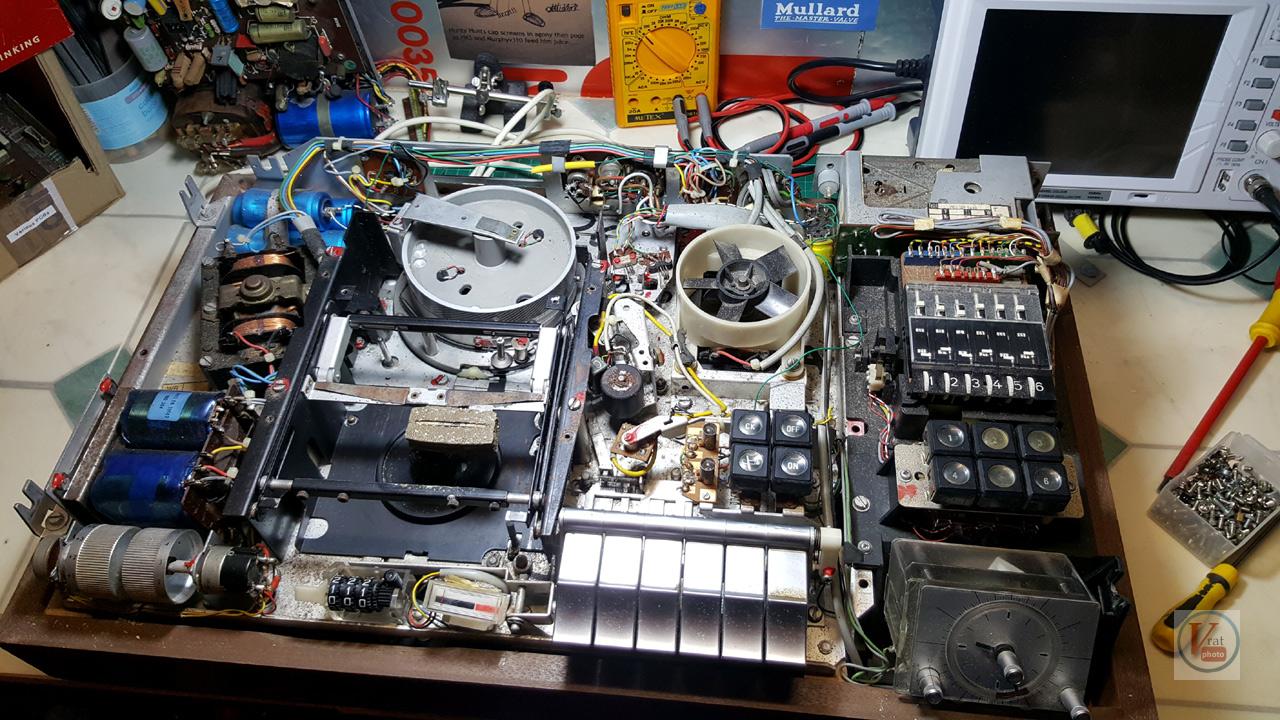 Before any explanation of the VCR servo can be given, a closer examination of some of its functions must be made. Two types of correction to the speed of either the tape capstan or head drum can take place. The first of these will correct for long-term fluctuations in the speed of rotation, such as may be caused by the changing amounts of tape on the two spools in the cassette producing a slow but gradual fluctuation in the tape tension around the head drum. The second type of correction will take place during a short period of time, for example to correct sync disturbances of the programme material, or very large servo errors which develop when either the record or playback modes are entered. Splices, creases and dropouts can also cause the servo to compensate for an error very quickly. Long-term errors are normally caused by changes in the mechanical conditions of the transport system itself, while short-term disturbances are nearly always caused by electronic fluctuations of either the material being recorded or replayed, or the electronics of the machine. One must always bear in mind that the prime function of the VCR servo is to reproduce during the playback mode the exact conditions that were present in the record mode.

The method used in the VCR (and in many other VTRs) to produce the error voltage, which is fed via a power amplifier to the eddy current brake, is rather unusual and warrants a closer look. To generate the error voltage two signals are required. One is a reference which is known to be correct, and the second is the feedback voltage which is to be compared with the reference. The reference voltage takes the form of a saw-tooth ramp falling in a linear manner from a high potential to a low potential, see Fig. 13. This ramp is of course generated at the reference frequency, 25Hz. The feedback signal which is to be compared with the reference consists of a pulse of constant amplitude and width, but whose frequency will change with a change in speed of the head drum or capstan motors. The feedback pulse is used to gate out part of the reference ramp as shown in Fig. 14. When the servo has locked, the gate position will appear in the centre of the ramp, but should the phase of the motor change then the gate position will travel either up or down the slope depending whether the speed of the motor has decreased or increased. The sampling gate conducts during the period occupied by the feedback pulse, and the coincident portion of the ramp is removed. This is amplified and then fed to a smoothing or storage stage. A basic block diagram is shown in Fig. 15. As the phase of the feedback pulse changes then so does the gating position on the reference ramp causing the gated signal to rise or fall in potential. See Fig. 16.

The block diagram of the VCR servo in the record mode is shown in Fig. 17. As we have seen, during the record mode the servo reference is the field sync information contained in the video signal to be recorded. The separated mixed sync pulses are fed to a field pulse separator TS461 and then clipped by TS462 to produce a clean positive-going field sync pulse. These field sync pulses are then used to lock the master reference oscillator TS228 and TS229. It can be seen from the block diagram that the method of controlling the frequency of this oscillator is very similar to the correction system just explained. The square-wave output from the oscillator TS228, TS229 is fed to a saw-tooth generator TS230.

The output of this stage is a waveform similar to that shown in Fig. 13 and this is gated by the shaped field pulse which is applied to the sampling gate TS231. The output of the sampling gate consists of the gated portion of the ramp applied to its input, the amplitude of this gated signal being dependent on the phase of the master oscillator when compared with the reference field pulses. This error voltage is then applied across a capacitor to store the signal and convert it to the d.c. control voltage. From here the signal is d.c. coupled to an impedance matching emitter -follower and then applied to the master oscillator.

The square-wave output of the master oscillator is fed to a binary divider TS226, 227 and from here the true reference signal is fed to three separate sections of the servo. The first of these feeds is to a pulse amplifier which drives the control track record head. It will be noted that the signal recorded does not have h.f. bias as one might expect but is simply recorded directly onto the tape. All that is required of the control track signal is that it gives an accurate reference of the moment that a new picture is recorded. The shape, or any distortion is not important. Even broadcast machines costing many tens of thousands of pounds do not go to the expense of biasing the control track signal. The second output of the binary divider is applied to the head drum servo as the reference signal and the third output is fed to the capstan servo, again as a reference.

Comparison between the reference and the feedback signal needs no detailed explanation, apart from mentioning that the feedback signal is produced by passing a magnet that is attached to the head drum over a pick-up coil once every revolution of the head drum. The resulting pulse from the pick-up coil is shaped by TS201 before being used to gate the ramp. The error voltage from the storage circuit is applied to one input of a differential amplifier, the second input to this amplifier is produced by half -wave rectifying and smoothing the error voltage (D205 and C209).

The direct feed to the differential amplifier will be a d.c. voltage plus a ripple a.c. caused by the sample rate in the discriminator. The second input contains just the d.c. component of the error. Once the servo has locked the ripple voltage will fall because a constant -rate sample of the same potential is being made and then smoothed by the storage circuit. If the servo loses lock then the gate position will travel up or down the ramp producing the varying ripple voltage which is then used to produce an output from the differential amplifier. The big advantage if producing both inputs of the differential amplifier from the error voltage is that the difference between the two will always be comparatively small. Hence the servo is always inside its normal lock -in range, and is able to lock from the start of a mode with maximum speed. The output of the differential amplifier is amplified by TS212 and fed to the eddy current brake to control the speed of the head drum. The video head is now locked directly to the picture information being recorded and phased so that the field sync is being recorded at the beginning of a new scan of the tape.

The techniques used in the tape -capstan servo are very similar indeed to those used with the head drum, the only differences being the introduction of a lock -in circuit between the storage stage and the differential amplifier, and the absence of a pulse amplifier in the feedback path. The discriminator is the same, in principle, as before; only the feedback signal has changed and this takes the form of a 25Hz pulse derived from a sync head on the capstan flywheel. The error signal from the storage stage TS217/220 has its d.c. component directly coupled to the differential amplifier, while the a.c. component is fed to a lock -in circuit which amplifies the a.c. error and stores it on a 10µF capacitor, producing a smoothed d.c. voltage. A portion of this voltage is added to the original error and applied to one input of the differential amplifier. The remainder of the d.c. voltage is fed via a diode limiting circuit (to prevent the servo from going outside its correction range) to the second input.

The reader will notice that up to now all the correction on the speed of the capstan servo has been long-term d.c. correction because of the slow tape speed changes required. Remember that the guard band between video tracks on the tape is very small indeed, and any rapid correction could cause the servo to overshoot the information on the tape. A small amount of a.c. correction is however applied in the form of feedback from the output to the input of the differential amplifier. The error output of the differential amplifier, is now fed via a power amplifier to the eddy current brake on the tape transport capstan motor. During the record mode the capstan and the head drum are synchronised directly to the incoming picture information. The head drum is locked in such a way that the field sync information is recorded at the beginning of each new video track, and the capstan produces a synchronised and continuous tape speed. Should the frequency of the reference field pulse shift, then both servos will compensate for the change simultaneously.

As we have seen earlier in the series, the servo reference in the playback mode is mains frequency, and the head drum servo locks directly to this reference once it has been processed and divided by two. Fig. 18 shows the block diagram of the machine in the playback mode; the head drum servo should need no explanation. The capstan servo is again very similar to the arrangement used in the record mode apart from the fact that the feedback signal is delayed by TS465 and TS466. This provides a method of accurately phasing the position of the tape so that the video head is scanning through the centre of the recorded information. The capstan servo feedback signal is of course the picture frequency control track.

When both of the servos are locked in the playback mode the feedback pulse from the head drum is coincident with the mains reference, causing the video head to start its scan of the tape. The capstan has positioned the tape so that the control track pulse from the tape is again coincident with the mains reference, and hence the control
track pulse is also coincident with the beginning of the head scan across the tape. In the record mode this was the point at which the field sync information was recorded, so it can be seen that the servo has in fact reproduced the exact conditions that were present during the recording of the material.