With the arrival of Teletext ( Ceefax) and Video cassette recorders in the early 70’s this was a frequent bug many sought a solution for. This article will provide the various mods you need to perform to remove the text lines and VCR related problems from Vintage CTV’s.

This one document will list the various sets and the modifications to be made. As and when I come across mods in the tele mags, I will add them. If in the meantime any readers have others, please leave them in the comments section below.

No satisfactory modification is considered possible if the number of Teletext lines increases beyond six.

To make a G8 VCR compatible the panels have the flywheel sync time-constant altered as follows:-

This modification can be carried out on all panels.

Teletext shadow is the term that has been applied to indicate the effects of secondary emission created by the presence of lines of teletext data at the top of the CRT screen. These effects can be described in many ways, the two most common being a dark band across the top portion of the picture, and two areas of brighter picture also towards the top.

To remedy the effect, which is aggravated by CRT and associated circuit manufacturing tolerances together with the picture position and height adjustment, it is necessary to extend the field blanking by adding a series resistor into the base of T4488 (type BC148) on the timebase panel. This may be achieved by cutting the print which joins the base of T4488 to the junction of R4486/C4515, then connecting the resistor across these points.

The value of this resistor must be selected to provide adequate blanking of the teletext data yet avoiding the clipping of the start of the picture. The value will generally be between 220 Ohms and 470 Ohms 0.5 Watt rating, depending on the timebase panel and deflection coil tolerances.”

Apparently the black -level clamping problem (random horizontal bars) has been encountered with later versions of the Philips KT3 and K30 chassis that use the TDA3560 single-chip decoder. The recommended modification is to increase the value of the clamp reservoir capacitors C44/5/6 from 0.022μF to 10μF. This problem could occur with other chassis using the TDA3560 – one thinks of the Thorn TX10 (clamp capacitors C616/7/8) and later versions of the TX9(C64/5/6) for example, where the capacitors are 0.1μF.

The mod is detailed in “Television”, May 1982, “TV-VCR Compatibility” by Eugene Trundle: 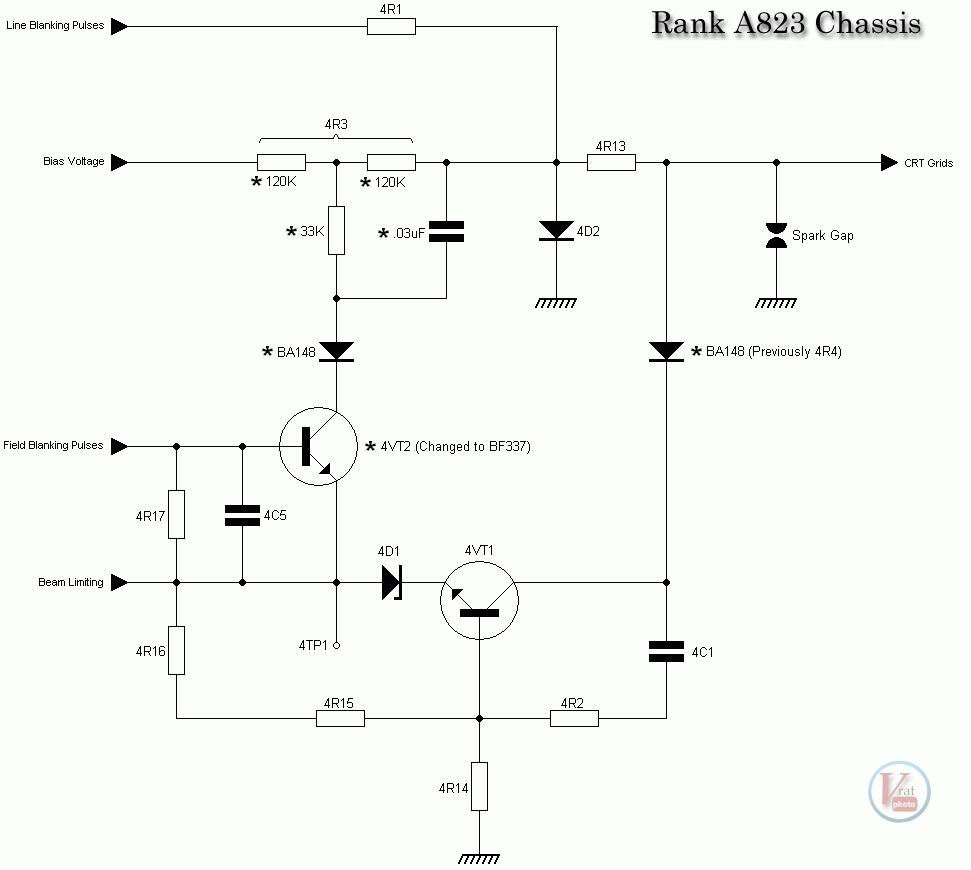 Slightly re adjust RV24, just enough to remove dot pattern but without introducing a field linearity error. If this does not work change the value of R257 to 1K and repeat the adjustment of RV24. Further improvement may be achieved by adding a 100nF capacitor between the anode of D44 and chassis. 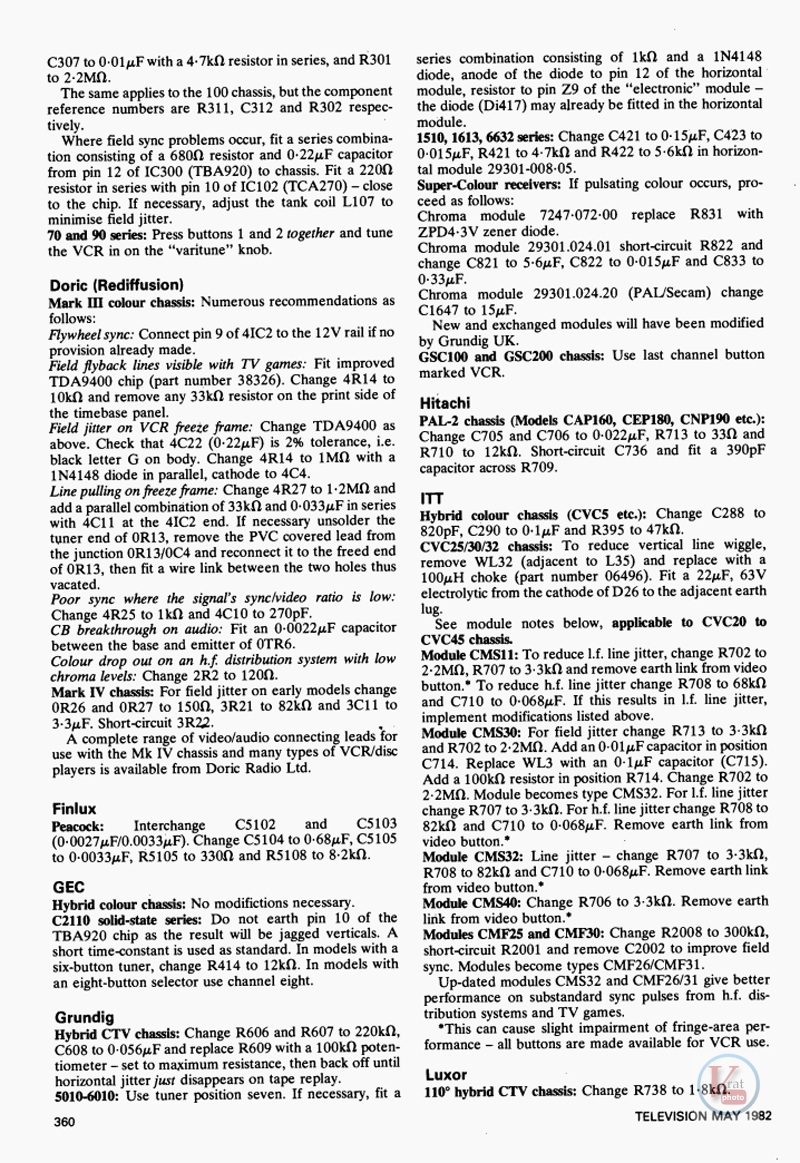 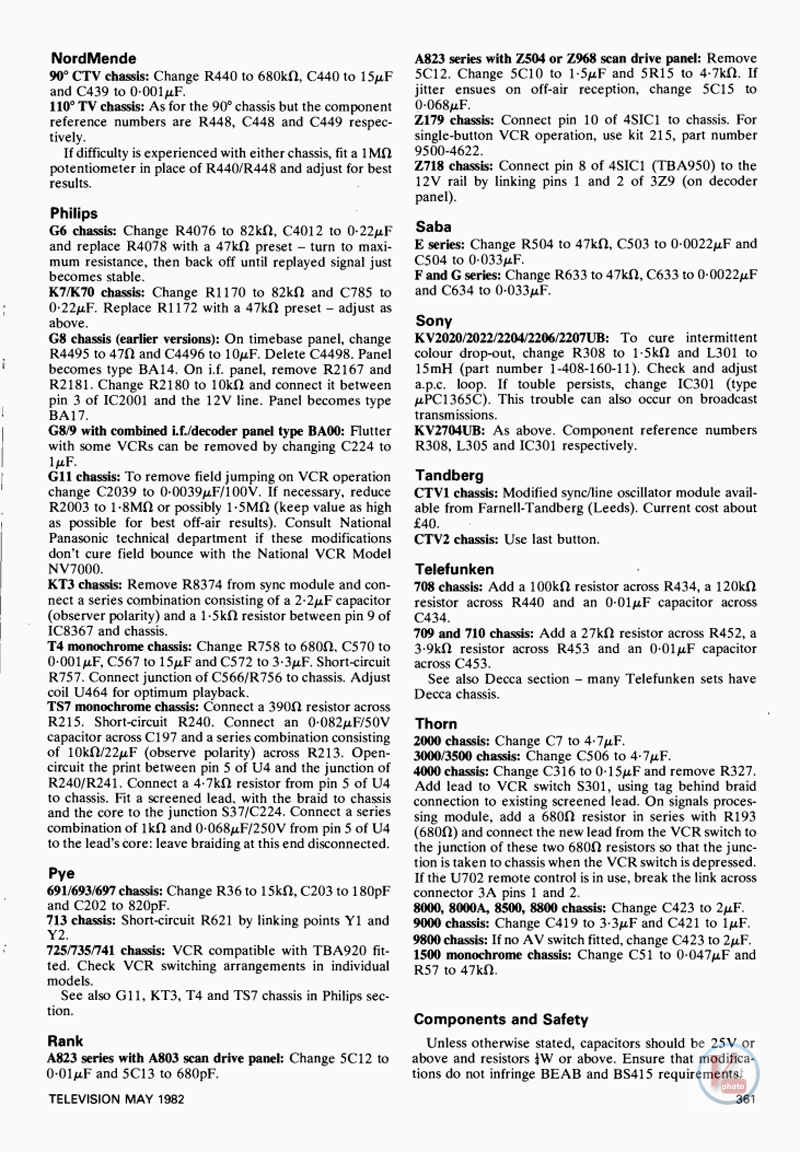 If anyone has a modification for a particular TV, to address VCR or Teletext issues other those listed above, please feel free to add them. I’m sure there must be many more to cover.