Bruch invented the PAL colour television system at Telefunken in the early 1960s. In addition to his research activities Walter Bruch was an honorary lecturer at Hannover Technical University. He was awarded the Werner von Siemens Ring in 1975. 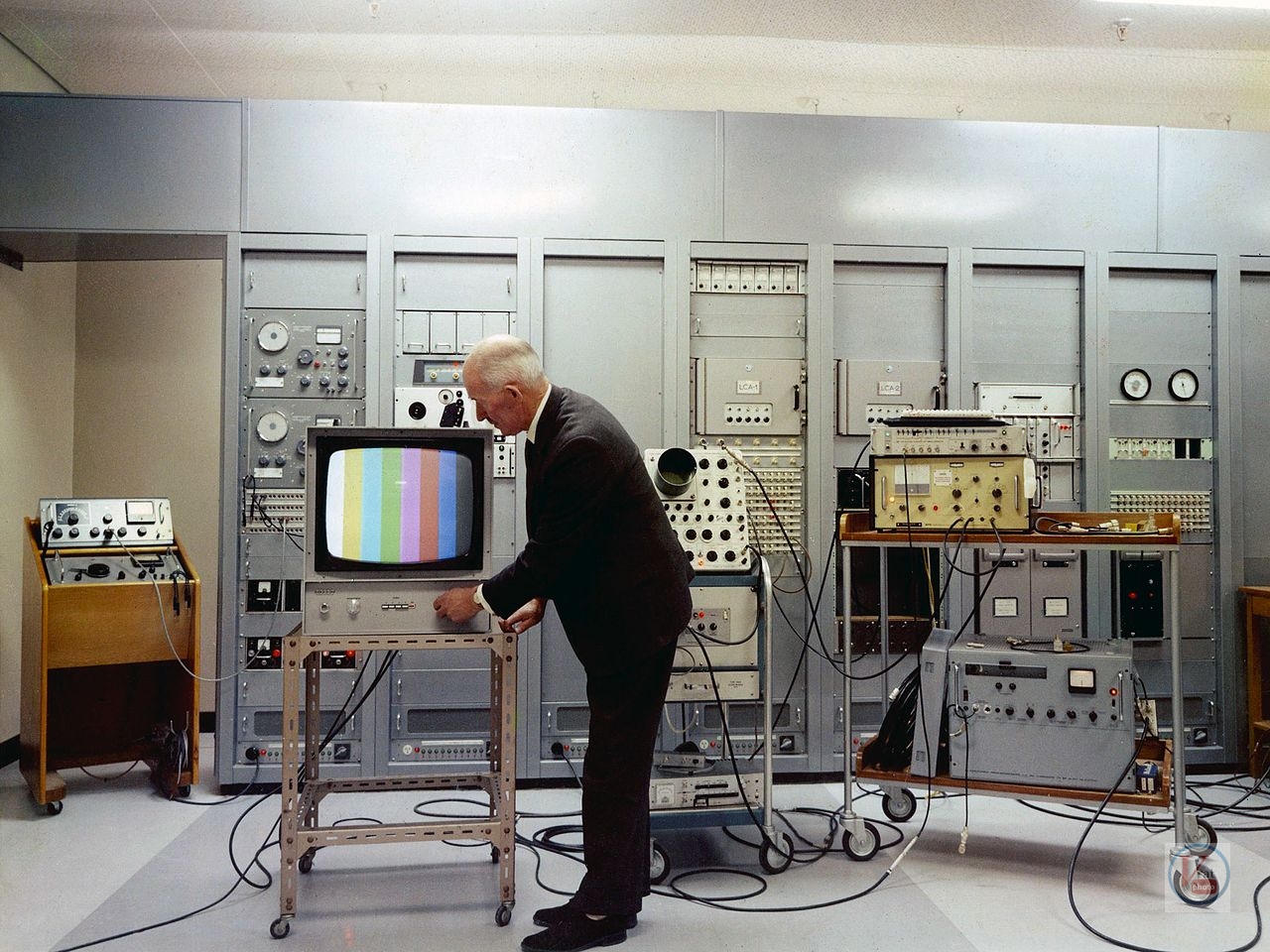 Telefunken Experimental Color Television, 1967
Here is the Prototype PAL-system device by Professor Walter Bruch, case with acrylic back, with additional control units. An extremely rare item from the dawn of colour television. 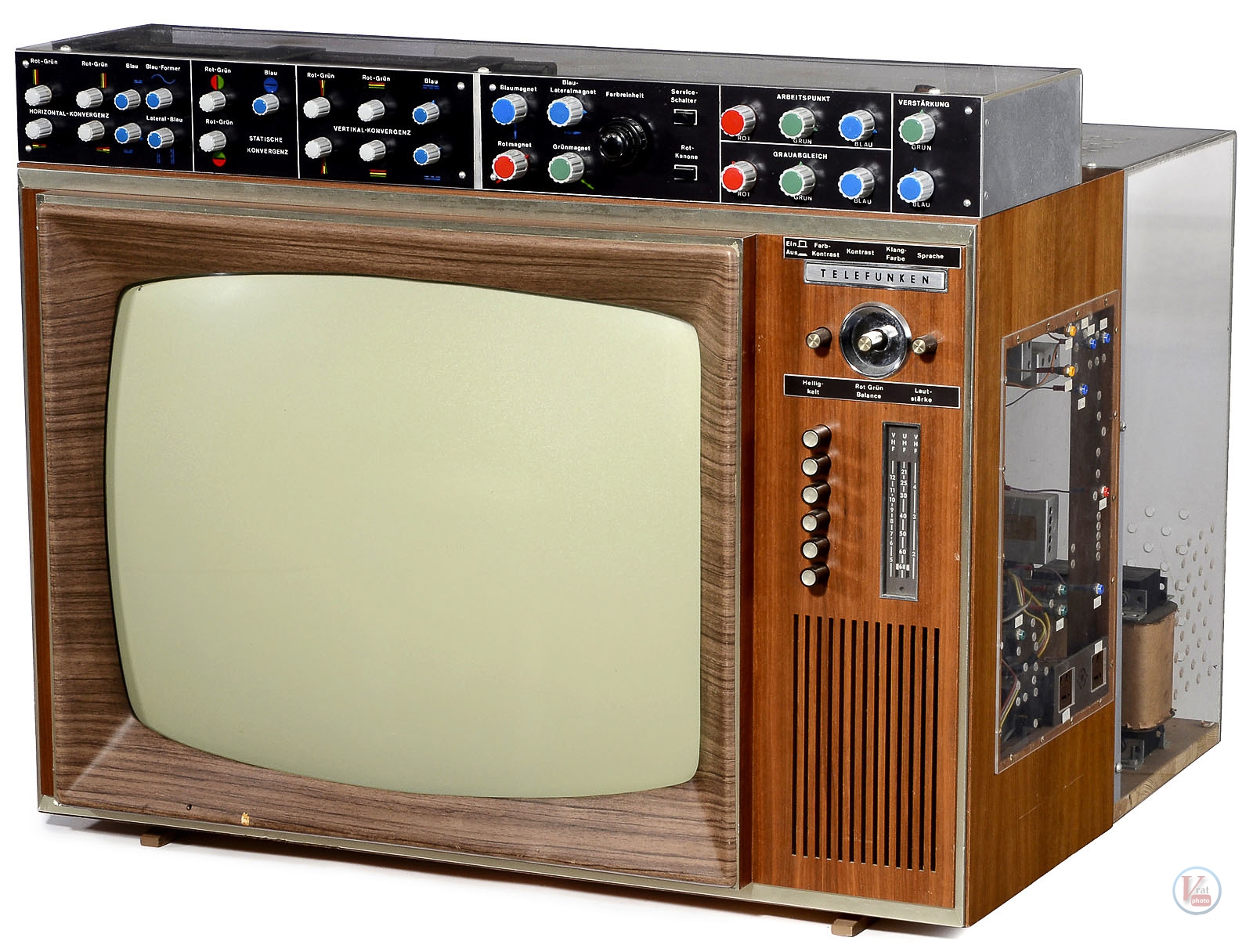 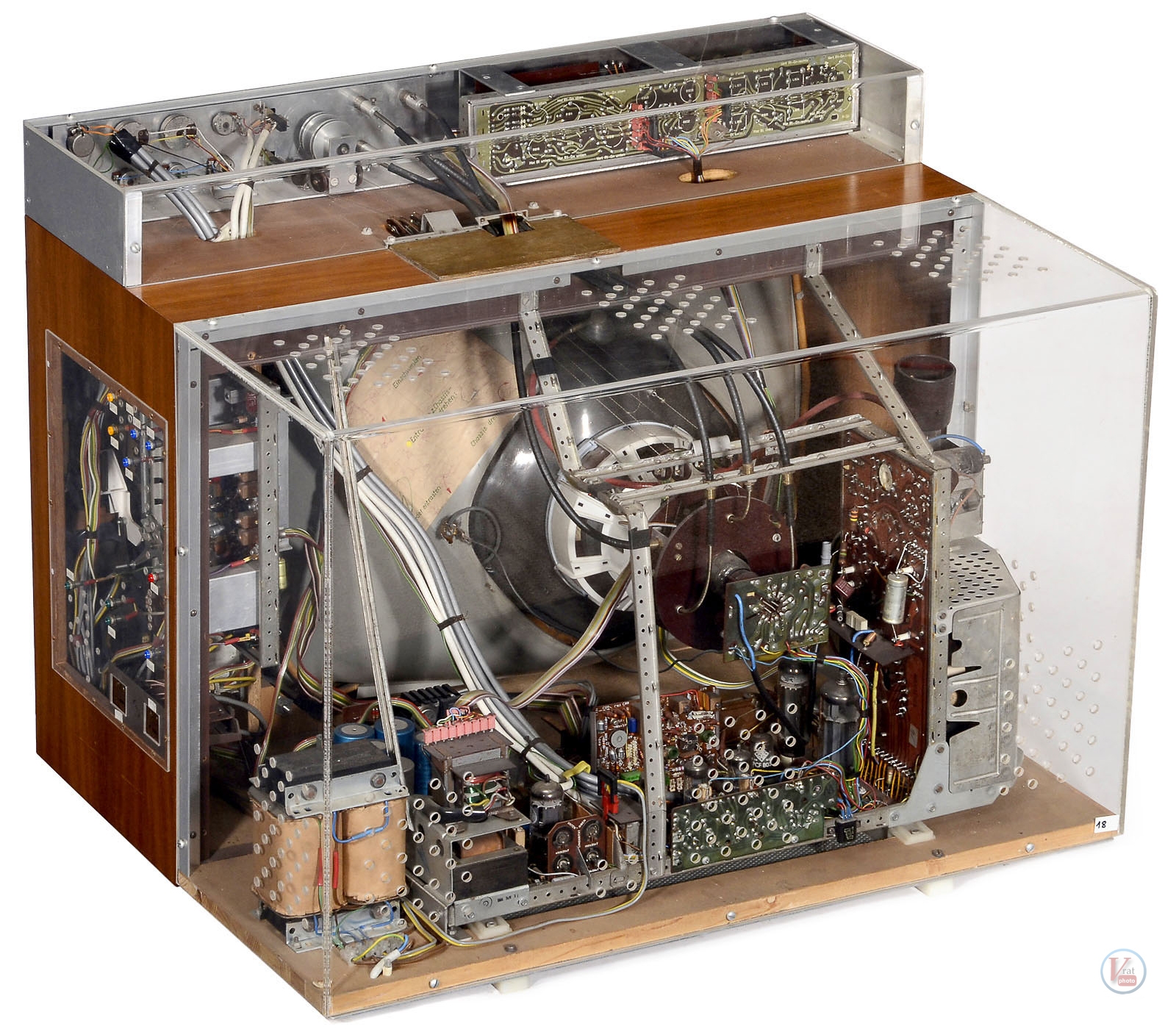 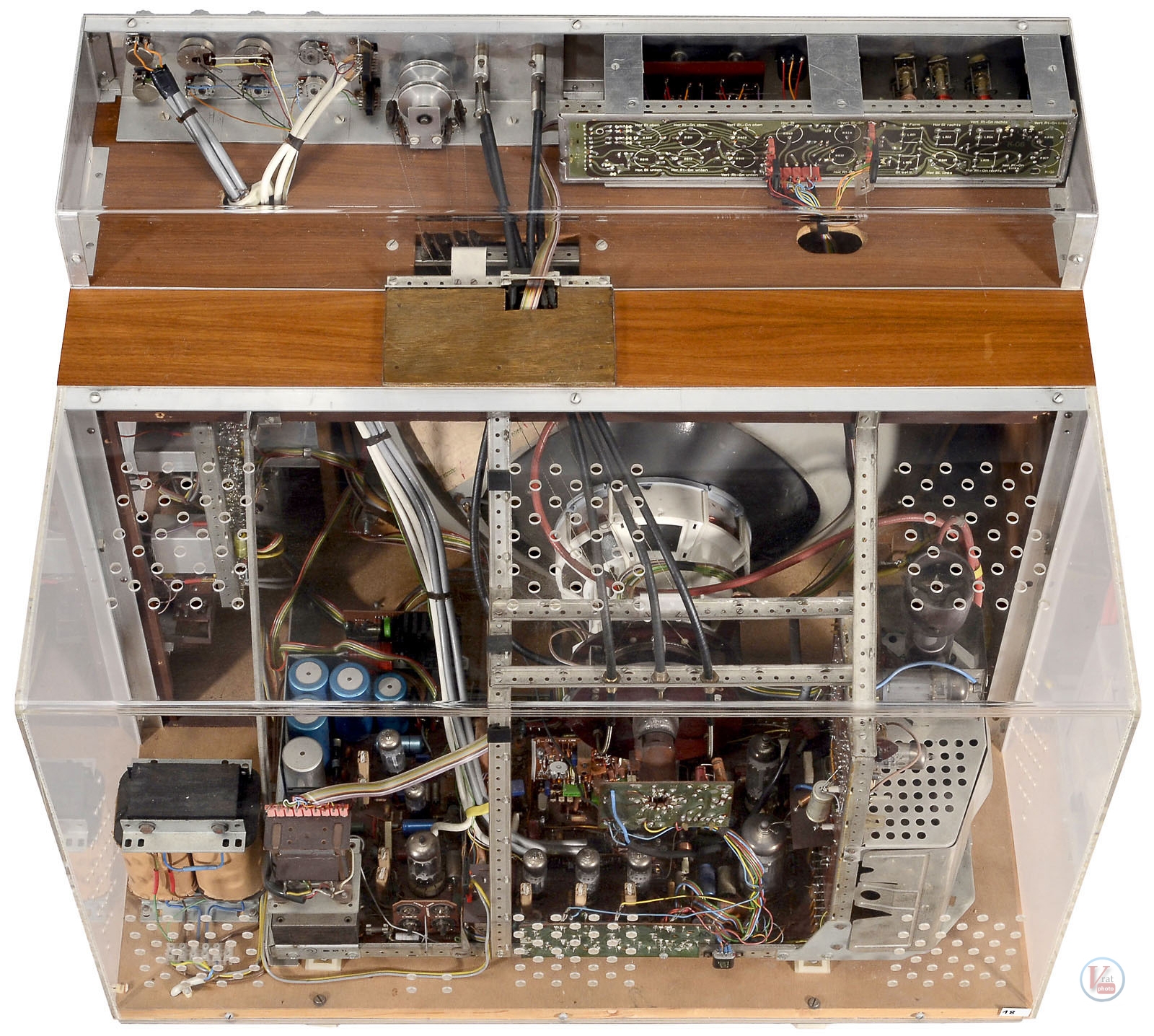 PAL system uses a quadrature amplitude modulated subcarrier carrying the chrominance information added to the luminance video signal to form a composite video baseband signal. The frequency of this subcarrier is 4.43361875 MHz

The name “Phase Alternating Line” describes the way that the phase of part of the colour information on the video signal is reversed with each line, which automatically corrects phase errors in the transmission of the signal by cancelling them out, at the expense of vertical frame colour resolution. Lines where the colour phase is reversed compared to NTSC are often called PAL or phase-alternation lines, which justifies one of the expansions of the acronym, while the other lines are called NTSC lines. Early PAL receivers relied on the human eye to do that cancelling; however, this resulted in a comb-like effect known as Hanover bars on larger phase errors. Thus, most receivers now use a chrominance analogue delay line, which stores the received colour information on each line of display; an average of the colour information from the previous line and the current line is then used to drive the picture tube. The effect is that phase errors result in saturation changes, which are less objectionable than the equivalent hue changes of NTSC. A minor drawback is that the vertical colour resolution is poorer than the NTSC system’s, but since the human eye also has a colour resolution that is much lower than its brightness resolution, this effect is not visible. In any case, NTSC, PAL, and SECAM all have chrominance bandwidth (horizontal colour detail) reduced greatly compared to the luminance signal.

The 4.43361875 MHz frequency of the colour carrier is a result of 283.75 colour clock cycles per line plus a 25 Hz offset to avoid interferences. Since the line frequency (number of lines per second) is 15625 Hz (625 lines × 50 Hz ÷ 2), the colour carrier frequency calculates as follows: 4.43361875 MHz = 283.75 × 15625 Hz + 25 Hz. The frequency 50 Hz is the optional refresh frequency of the monitor to be able to create an illusion of motion, while 625 lines means the vertical lines or resolution that the PAL system supports. The original colour carrier is required by the colour decoder to recreate the colour difference signals. Since the carrier is not transmitted with the video information it has to be generated locally in the receiver. In order that the phase of this locally generated signal can match the transmitted information, a 10 cycle burst of colour subcarrier is added to the video signal shortly after the line sync pulse, but before the picture information, during the so-called back porch. This colour burst is not actually in phase with the original colour subcarrier, but leads it by 45 degrees on the odd lines and lags it by 45 degrees on the even lines. This swinging burst enables the colour decoder circuitry to distinguish the phase of the R-Y vector which reverses every line.

I like that Telefunken demonstration set, notice the mechanical linkages for purity and blue lat adjustments, great for learning how those adjustments work. I notice there is no cover on the EHT chimney, perhaps the plexi-glass provides enough screening due to the distance…
I hope that TV still exists somewhere in a museum or with a German Broadcaster